With the advancement of modern medical imaging modalities, small renal masses (SRMs, defined as solid tumors less than 4 cm in maximum diameter) are more likely to be detected incidentally (1). Approximately 15–20% of SRMs are benign, and 20–25% are considered only potentially biologically aggressive (2,3). Given the histological uncertainty of SRMs, active surveillance (AS) with delayed intervention has been widely practiced in strictly selected patients who are reluctant to undergo surgical intervention or for whom the risks of surgery are considered to outweigh the benefits (4-6). AS offers urologists a unique opportunity to study the natural history of renal cell carcinoma (RCC), as the gold standard treatment of localized kidney cancer is surgical excision at the time of diagnosis (6). Several studies have investigated the growth kinetics of sporadic clear cell renal cell carcinoma (ccRCC) (7-11) and ccRCC in von Hippel-Lindau (VHL) disease (12-15); however, the difference in growth kinetics between the two groups is not well understood. Hence, the aim of our study was to further evaluate and compare the growth kinetics of sporadic ccRCC with those of ccRCC in VHL disease.

We present the following article in accordance with the STROBE reporting checklist (available at http://dx.doi.org/10.21037/tau-20-1271).

A retrospective cohort study design was used. For the sporadic group, we retrospectively reviewed the kidney cancer databases at the Institute of Urology, Peking University to identify patients who were treated with initial AS for at least 12 months between January 1990 and August 2014. A total of 90 patients with 91 renal masses were included. Patients who did not undergo delayed surgery were excluded, and only patients with ccRCC confirmed by postoperative pathology were included. Sixty patients with 61 tumors were enrolled in the sporadic group.

For the VHL group, we retrospectively reviewed the charts of 38 patients with VHL disease and enhanced renal masses between January 1988 and June 2011 who underwent AS at the Department of Urology, Renji Hospital. All patients met the clinical diagnostic criteria (16) or had a confirmed VHL gene germline mutation. Patients who did not undergo delayed surgery were excluded, and only patients with ccRCC confirmed by postoperative pathology were included. Fifteen patients with 30 tumors were enrolled in the VHL group.

During the time of AS, enhanced computed tomography (CT) was performed at least every 6 months for all patients in both groups. All images were reviewed by an experienced radiologist and a urologic oncologist. The tumor size was defined as the maximum axial diameter of the tumor on CT or MRI images. The growth rate was defined as the mean growth rate of the largest diameter.

The decision to proceed with delayed surgery was a consensus between the attending surgeon and the patient based on tumor size, growth rate, and patient factors, including general condition, surgical comorbidities, and the patient’s willingness to undergo surgery. All patients in the sporadic group underwent surgery at the Peking University First Hospital, and all patients in the VHL group underwent surgery at the Renji Hospital. All surgical specimens were examined at two centers separately with the same typing and staging systems. The histological classification was determined by the Heidelberg typing system, the pathological stage was assessed according to the 2002 American Joint Committee on Cancer TNM staging system, and pathological nuclear grading was performed according to the Fuhrman grading system.

The study was conducted in accordance with the Declaration of Helsinki (as revised in 2013). The study was approved by the institutional ethical committee of Peking University First Hospital {2015[977]} and individual consent for this retrospective analysis was waived.

Wilcoxon rank-sum test and Fisher’s exact test were used to compare the patient and tumor characteristics between groups. The growth rate was compared using Wilcoxon rank-sum test. Multiple linear regression was used to identify the factors that correlated with the growth rate. All statistical analyses were processed by SAS OnDemand for Academics (SAS Institute, Cary NC, USA). A P<0.05 was considered statistically significant.

Figure 1 is a flow diagram of patient selection. A total of 60 patients with 61 ccRCCs were enrolled in the sporadic group, while 15 patients with 30 ccRCCs were included in the VHL group. The demographic and tumor characteristics of both groups are summarized in Table 1. The mean age of the sporadic group was 55 years (range 26–81), and that of the VHL group was 41 years (range 30–55). 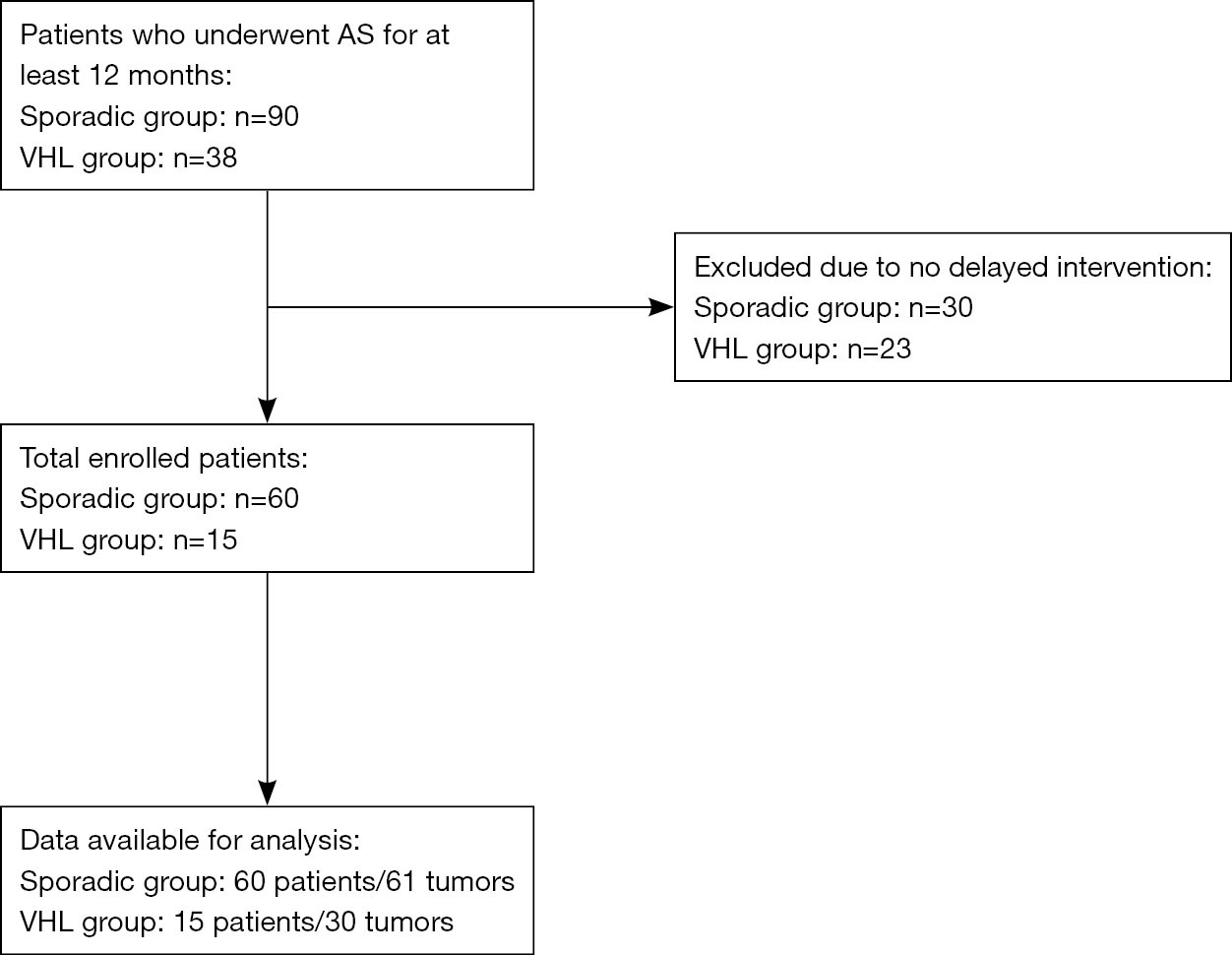 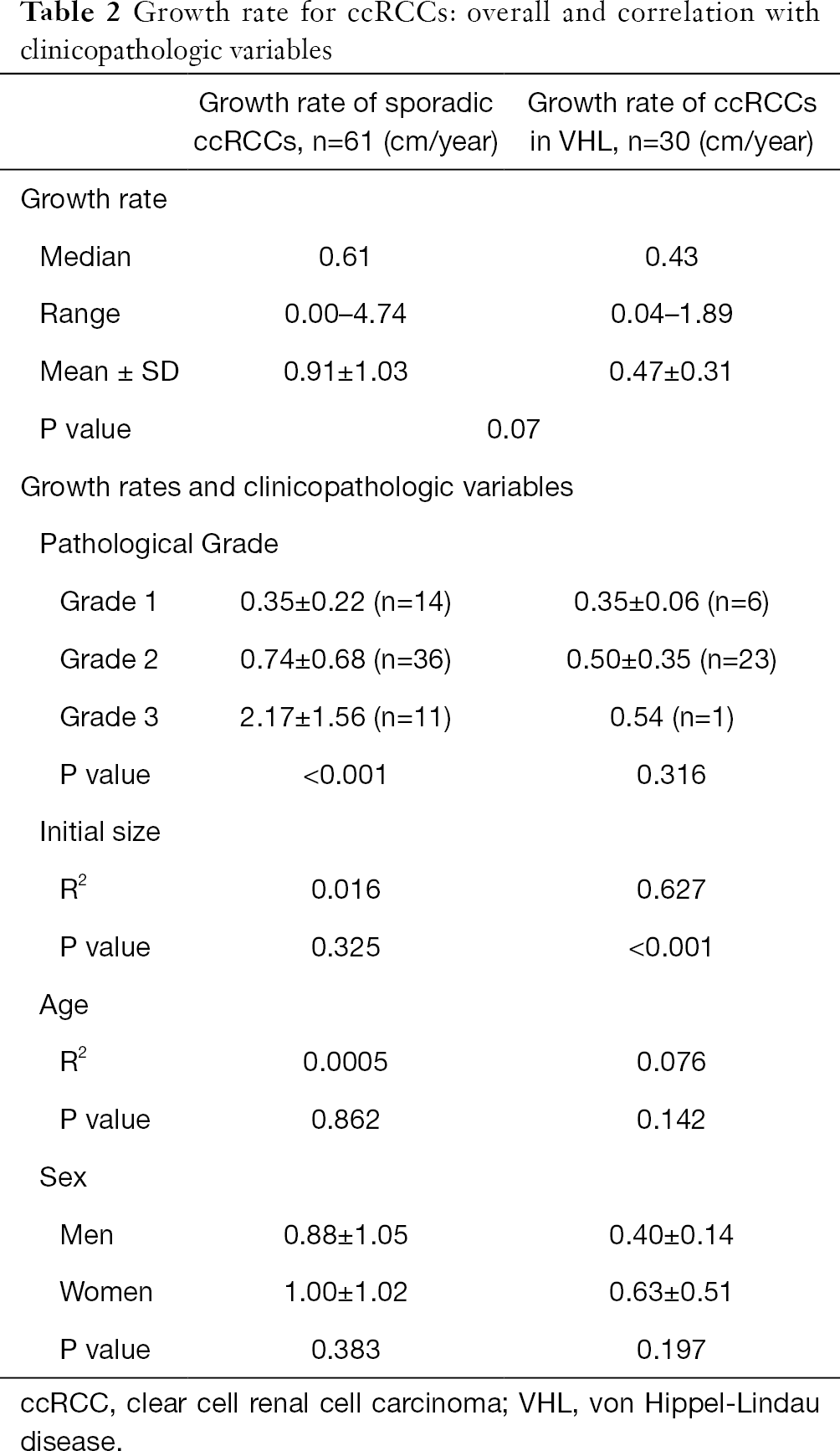 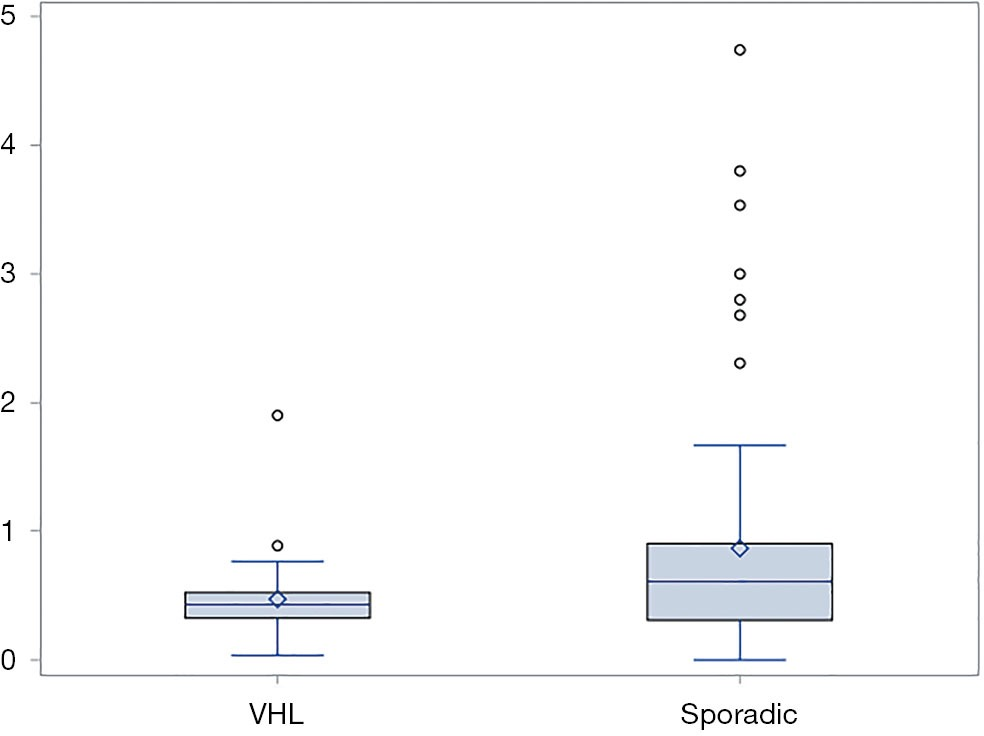 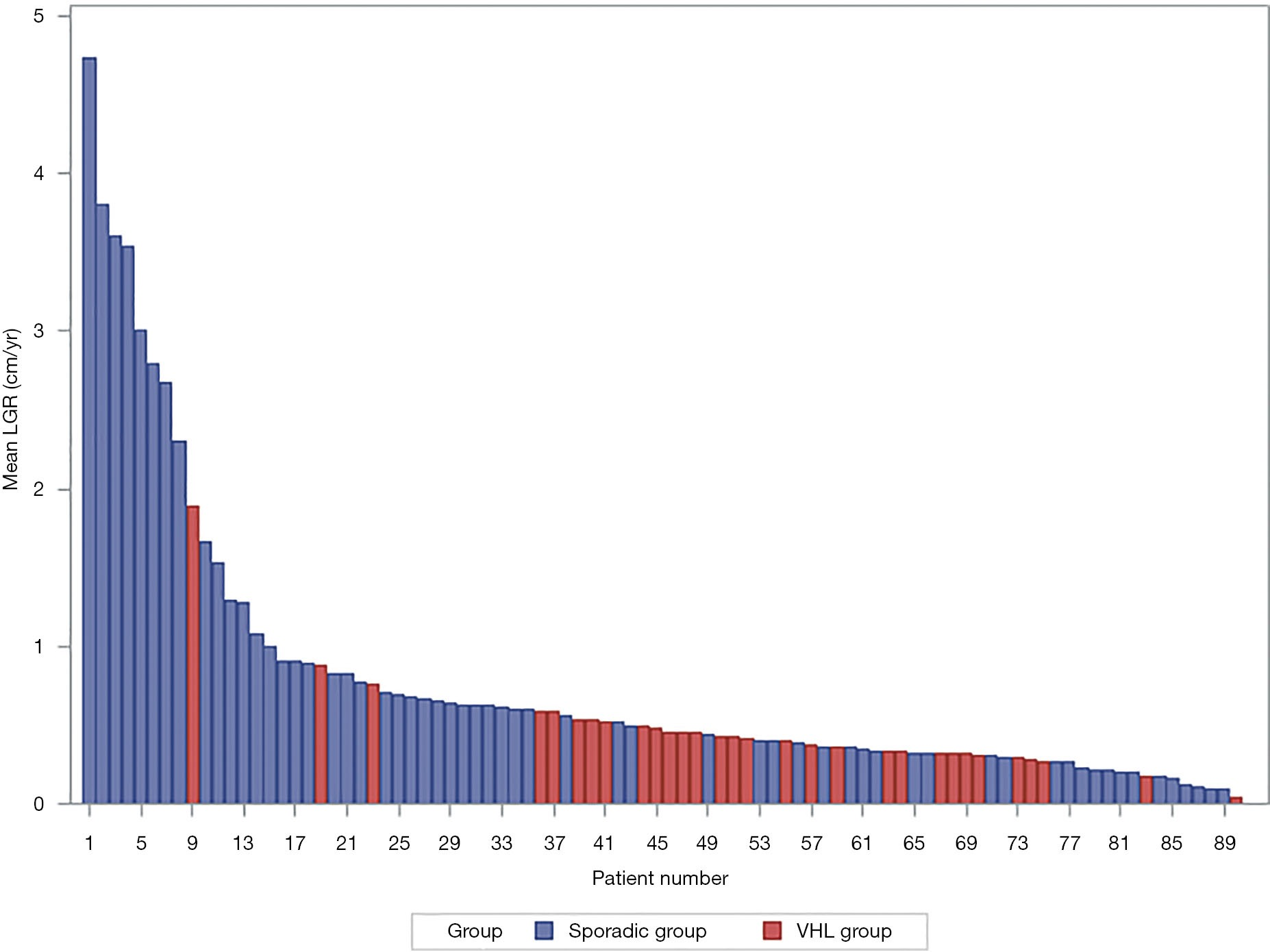 ccRCC is the most common malignancy of the kidney. The only curative treatment supported by high-quality evidence is surgery (6), so the patient and surgeon often pursue prompt intervention soon after the diagnosis. Hence, investigating the in vivo growth rate of ccRCC has been difficult. AS provides urologists a unique way to study the growth pattern and kinetics of ccRCC. Previous studies suggested that ccRCCs in VHL disease may be more indolent than sporadic ccRCCs (12-15), and our study showed a similar tendency. However, due to the limited sample size, we need further study to confirm this phenomenon.

Given the fact that predictors of rapid tumor growth rate remain elusive (7), we further investigated the factors related to the growth rate. A study conducted by Kouba et al. reported a faster growth rate in young patients than in old patients (17); however, our previous study (11) and this study failed to identify a correlation between age and growth rate in either group.

We hypothesize that the intratumoral heterogeneity of sporadic ccRCC is the cause of this disparity. Before further discussion, it is imperative for us to mention that although the heterogeneity of sporadic ccRCC is well established (25-28), we could not find clear evidence to prove that VHL-associated ccRCC is genetically less heterogeneous than the sporadic. However, by assuming a less heterogeneity in VHL-associated ccRCC, this disparity could be easily explained. In a highly heterogeneous tumor, e.g., the sporadic ccRCC, we postulate that the most aggressive part of the tumor contributes the most to the growth rate, thus resulting in different growth potential among tumors with similar size. While in a less heterogeneous tumor, e.g., the VHL-associated ccRCC, the main factor that would affect the growth rate would be the size of the tumor.

Regarding the failure of identifying a unifying predictor of rapid tumor growth from previous studies, we believe this could be partially attributed to the intertumoral heterogeneity in ccRCC, which is a less established phenomenon than intratumoral heterogeneity (28). In Figures 2,3, our data demonstrated that the growth rate of sporadic ccRCC is highly variated, supporting the existence of intertumoral heterogeneity, hence warranting a consideration of this less reported heterogeneity for future studies. However, this hypothesis requires extensive further investigations before a fully concrete conclusion can be made. Moreover, our study has inherent limitations due to the retrospective nature of this study, intra- and interobserver variability, selection bias, and inclusion of a rather small sample size.

Reporting Checklist: The authors have completed the STROBE reporting checklist. Available at http://dx.doi.org/10.21037/tau-20-1271

Ethical Statement: The authors are accountable for all aspects of the work in ensuring that questions related to the accuracy or integrity of any part of the work are appropriately investigated and resolved. The study was conducted in accordance with the Declaration of Helsinki (as revised in 2013). The study was approved by the institutional ethical committee of Peking University First Hospital (2015[977]) and individual consent for this retrospective analysis was waived.