Diabetic nephropathy is one of the common complications of diabetes mellitus, which is induced by the metabolic abnormalities and the related damage to renal microvessels that caused by hyperglycemia. With the progression of the disease, diabetic nephropathy may develop to urinary toxicity with a high disability and mortality rate (1). Most diabetic patients are complicated with coronary heart disease, cardiomyopathy and other cardiovascular diseases. After kidney damage, cardiovascular disease and other factors lead to the progression of the disease, and the patients with excessive body fluid load may also be complicated with heart failure. Related literature has reported that the incidence of heart failure in diabetic patients is about 22% (2). Diabetic nephropathy combined with heart failure generally has a long course and progresses slowly. Before the symptoms of proteinuria and heart failure appear in patients, it is easy to be ignored. Therefore it is of great significance to timely diagnose patients and determine the treatment plan at the early stage to improve the prognosis of patients. Previous studies have shown that indexes such as urine protein, creatinine, and urea nitrogen are poor diagnostic indicators of the disease (3). Therefore, there is an urgent clinical need to find new and effective biomarkers to improve the efficacy of early diagnosis of patients with diabetic nephropathy.

We present the following article in accordance with the STARD reporting checklist (available at http://dx.doi.org/10.21037/tau-21-35).

The clinical data of diabetic nephropathy patients treated in our inpatient department from January 2014 to December 2017 were collected and sorted. The following inclusion criteria were used: (I) patients with diabetes symptoms such as polyuria, polydipsia, weight loss caused by unknown causes, blood glucose ≥7.0 mmol for 3 consecutive days, and diagnosed with diabetes; (II) patients met the diagnostic criteria for nephropathy according to the Chinese medical association clinical diagnostic criteria for nephropathy (7); (III) patients met the diagnostic criteria in “China Heart Failure Diagnosis and Treatment Guidelines 2014” formulated by Chinese Society of Cardiology of Chinese Medical (8); (IV) patients aged under 80 years old; The exclusion criteria were as follows: (I) patients who had taken drugs for the control of blood glucose and serum inflammatory factors before being included in the study; (II) patients with concomitant malignant tumors or severe diseases of the vital organs; (III) patients who were likely to have poor treatment compliance; (IV) women during pregnancy and lactation; and (V) patients with heart failure caused by hyperthyroidism, rheumatic immune system diseases, and other factors.

A 3ml sample of venous blood was drawn from all subjects on an empty stomach on the morning of each evaluation. This was centrifuged for 10 minutes to separate serum and plasma and the serum samples were stored at −20 °C for further testing. The levels of AGEs and MMP-2 were detected using the Enzyme-linked immunosorbent assay (ELISA) purchased from Beijing Zhongshan Jinqiao Biotechnology (Beijing, China).

Morning urine (5 mL) was collected from the study subjects, followed by centrifuging for 10 min. Then mALB level in the supernatant was detected by the fully automatic specific protein analyzer (A15) and its supporting kits (Bio-Systems, Spain). The detection process was carried out in strict accordance with the kit instructions.

Firstly, the levels of AGEs, MMP-2, and mALB were compared between patients with simple diabetes and diabetic nephropathy, then between the observation group and the control group. Multiple logistic regression was performed to analyze the related risk factors of diabetic nephropathy patients. In addition, an ROC curve was drawn to analyze the predictive value of AGEs, MMP-2, and mALB levels.

Statistical analysis was performed using SPSS22.0 software (IBM, New York, USA). The count data was expressed as n (%), and analyzed using t test, and measurement data were described using mean ± standard deviation () and analyzed by chi-squared (χ2) test. Multiple logistic regression analysis was used to analyze the risk factors influencing patients with diabetic nephropathy with heart failure. The ROC curve was drawn and indicators such as the area under the ROC curve were calculated to analyze the predictive value of AGEs, MMP-2, and mALB levels. Results with P<0.05 indicated significant difference.

Comparison of AGEs, MMP-2, and mALB levels between simple diabetes and diabetic nephropathy

Comparison of AGEs, MMP-2, and mALB levels in diabetic nephropathy patients with or without heart failure

The levels of AGEs and mALB in the observation group (diabetic nephropathy patients with heart failure) were significantly higher than those in the control group (diabetic nephropathy patients without heart failure), and the level of MMP-2 in the observation group were significantly lower than that in the control group (P<0.05, Table 2).

Table 2 Comparison of AGEs, MMP-2, and mALB levels in patients with or without heart failure ()
Full table

The predictive value of AGEs, MMP-2, and mALB levels in diabetic nephropathy patients with heart failure 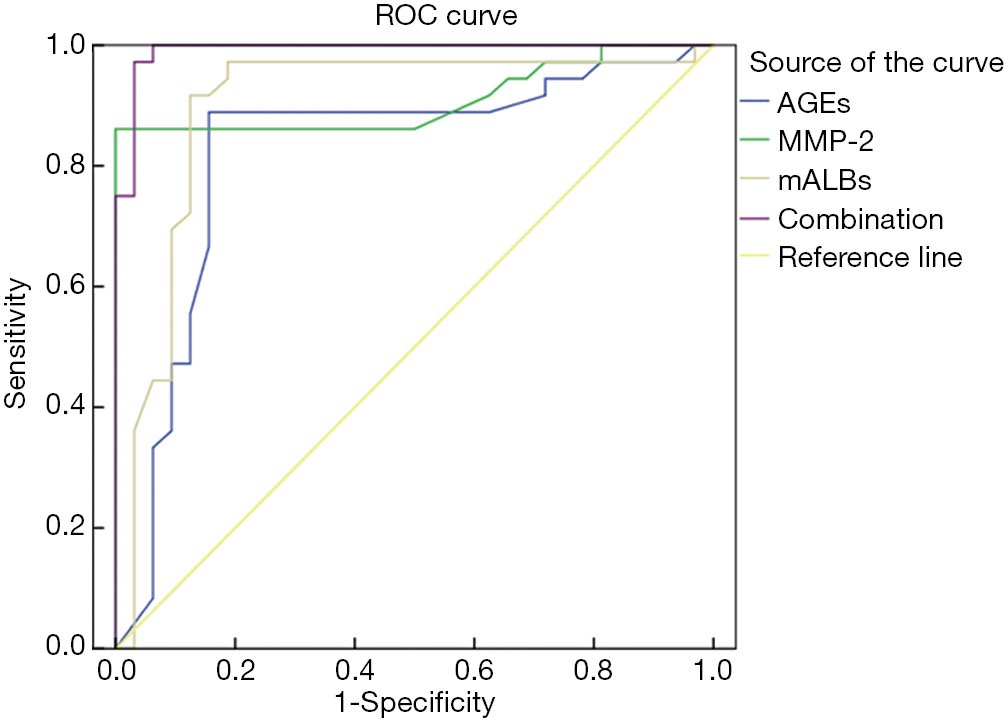 Diabetic nephropathy is usually caused by metabolic abnormalities and damage to small blood vessels in the kidney, and is a common complication in diabetics (10). Many patients suffer from high blood sugar, and when not effectively controlled this can lead to vascular disease and kidney damage. This can result in a decrease in left ventricular ejection volume of the heart, accelerating vasoconstriction, reducing blood flow in the kidneys, inducing water and sodium retention, and eventuate in heart failure. The combined effect of diabetes nephropathy and heart failure imposes significant detrimental effects on the lives of those affected and the identification of meaningful biomarkers to assist in the early diagnosis and treatment of patients is urgently required.

As a kind of collagenase with a degrading effect, MMP-2 is widely expressed in glomerular mesangial cells and can maintain the dynamic balance of extracellular matrix (15,16). Ma et al. (17) have pointed out that changes in MMP-2 levels are negatively correlated with the urinary albumin excretion rate, and its concentration will increase as renal function weakens. In the present study the urine MMP-2 level in the diabetic nephropathy group with heart failure was significantly lower than that of the diabetic nephropathy group without heart failure; and the urine MMP-2 level of the diabetic nephropathy group was significantly lower than that of the simple diabetes group. The decrease of MMP-2 levels in patients with diabetic nephropathy might be due to severe damage to the vascular endothelium, the increase of intercellular matrix components in the glomerular mesangial area, and the augment of urinary albumin excretion (18-20). Our results also showed that factors such as a history of smoking (yes), history of hypertension (yes), blood creatinine (abnormal increase), blood uric acid (abnormal increase), AGEs (abnormal increase), MMP-2 (abnormal decrease), and mALB (abnormally increase) were all independent risk factors affecting diabetic nephropathy patients combined with heart failure. This suggests that the occurrence of diabetic nephropathy combined with heart failure is a complex process influenced by multiple factors, including modifiable risk lifestyle risk factors which should be a focus for intervention. By drawing the ROC curve of AGEs, MMP-2, mALB, and the combined detection of the three indicators, we found that the area under the ROC curve was the largest by combined detection of the three. This suggests that the combined detection of serum AGEs, MMP-2, and urine mALB levels in patients with diabetic nephropathy can be used to predict the occurrence of heart failure clinically.

In summary, AGEs, MMP-2, and mALB have high predictive value for diabetic nephropathy patients with heart failure. The sensitivity and specificity of the three indicators are high, indicating their significant clinical value. However, due to the small sample size of cases and short study time in this study, the correlations in AGEs, MMP-2 and mALB needs to be further studied.

Reporting Checklist: The authors have completed the STARD reporting checklist. Available at http://dx.doi.org/10.21037/tau-21-35

Conflicts of Interest: All authors have completed the ICMJE uniform disclosure form (available at http://dx.doi.org/10.21037/tau-21-35). The authors have no conflicts of interest to declare.

Ethical Statement: The authors are accountable for all aspects of the work in ensuring that questions related to the accuracy or integrity of any part of the work are appropriately investigated and resolved. This study was approved by the People’s Hospital of Rongchang District [No. 2021-()]. All procedures performed in this study involving human participants were in accordance with the Declaration of Helsinki (as revised in 2013). Informed consent was taken from all the patients.