Kidney cancer is the most common malignant tumor of the kidney in adults, accounting for 2% to 3% of adult malignant tumors (1). At present, the incidence of kidney cancer is increasing at a rate of about 2% per year, which is the lethal tumor among urinary tract tumors. The Union for International Cancer Control (UICC) tumor-node-metastasis (TNM) classification system classifies tumors with perirenal fat invasion (PFI), renal sinus fat invasion (SFI), or renal vein invasion (RVI) as stage pT3a (2). This advanced disease state is typically aggressive with 5-year disease-free survival rates ranging from 30% to 85% (3,4), including a median time to recurrence ranging from 11 to 22 months (5-8). Surgery is the first choice for the treatment of kidney cancer, and also the only way to cure. RN is considered the “gold standard” for the treatment of localized renal cancer. With the continuous development of medical technology, the tumor control effect of PN is the same as that of RN (9-13), and it can preserve renal function and improve the quality of life of patients after surgery. It has become the new standard for the treatment of stage T1a renal cancer (14). However, for pT3a renal cell carcinoma (RCC), whether PN can be selected is still controversial.

The aim of this study was to compare the survival outcomes in patients with RN or PN. This study aims to provide evidence for pT3a RCC in the clinic through meta-analysis. We present the following article in accordance with the PRISMA reporting checklist (available at http://dx.doi.org/10.21037/tau-20-1262).

Databases including PubMed and EMBASE were searched for studies from 2010 to 2020. The keywords used were as follow: partial nephrectomy, radical nephrectomy, survival and pT3a RCC. Professional search style was used to search for related references manually.

Literature was independently screened by two reviewers based on the inclusion criteria, first screening the title and abstract. Then the full text of the documents was read to include the studies that may meet the inclusion criteria. After cross-checking the results, data were extracted from cohort studies. A unified table was used to record the information of each study, including the first author, publication year, research design, general case information, tumor size, surgery approach and data of cancer-specific survival (CSS), overall survival (OS) and cancer-specific mortality (CSM).

Modified Newcastle-Ottawa Scale (NOS) was used to evaluate the quality of the included documents. The scale consists of three large blocks, including: selection of research populations, comparability between groups and exposure evaluation or result evaluation. NOS uses a semi-quantitative star system to evaluate the quality of the literature, with a perfect score of nine stars. Two researchers evaluated each study independently.

This research used statistical software Stata13.0 to merge data. The data of CSS, OS, CSM, relapse-free survival (RFS), complications and positive surgical margin were extracted for analysis. Between-study statistical heterogeneity was assessed using I2 and the Cochrane Q test. If the studies are homogeneous (P>0.10, I2<50%), it is considered that there is no heterogeneity in the included literature, and the fixed-effect model is used (15). Counting data was analyzed by rate ratio (RR). The significance level was set to α=0.05, and 95% confidence interval (95% CI) was taken. The funnel plot was drawn and the symmetry of the funnel was tested by linear regression to detect the publication bias (16).

According to the inclusion and exclusion criteria, a total of nine articles were included in this study (17-25) (Figure 1). The characteristics of the studies are showed in Table 1. 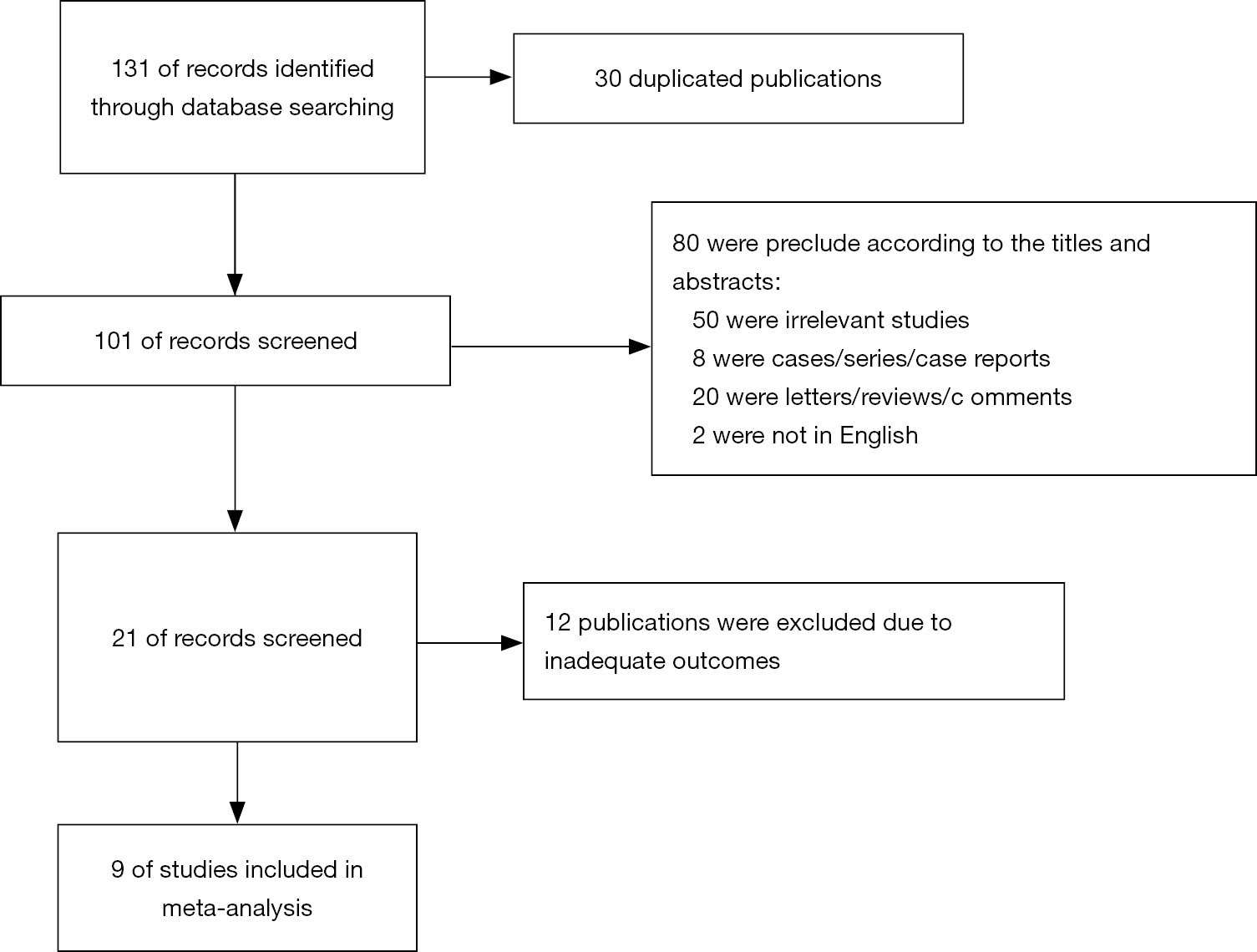 The quality of the articles included was satisfactory. The research quality evaluation is shown in Table 3.

Funnel plots were used for the test of publication bias, and the results were shown from Figures 8-13. 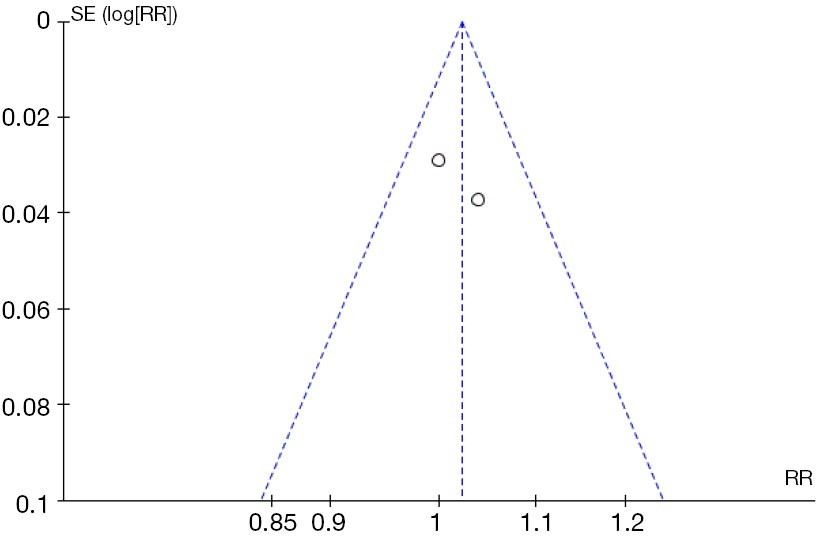 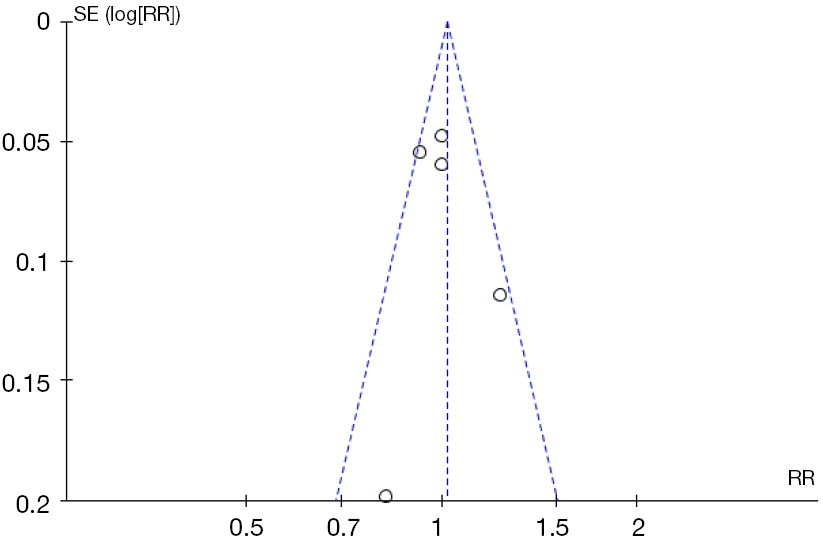 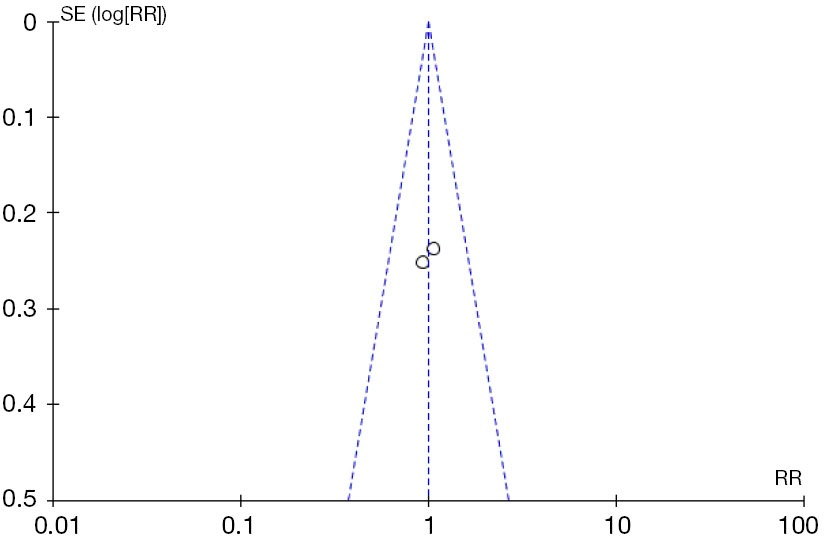 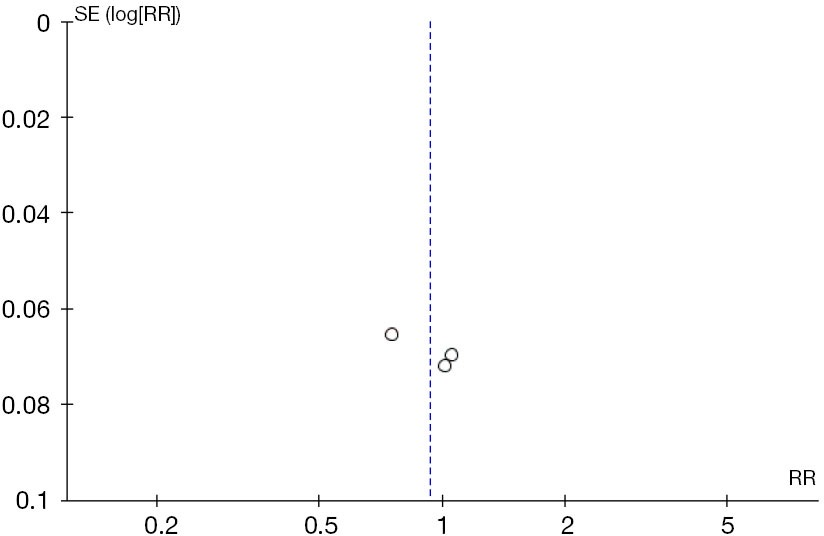 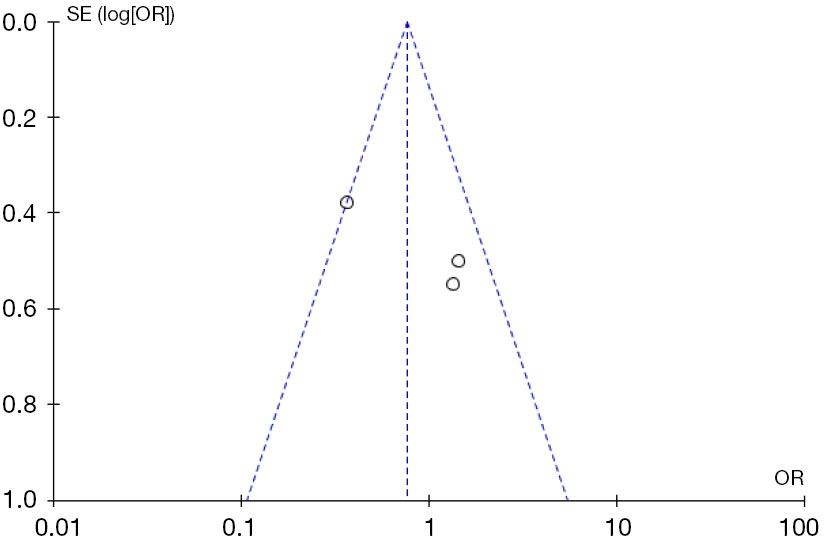 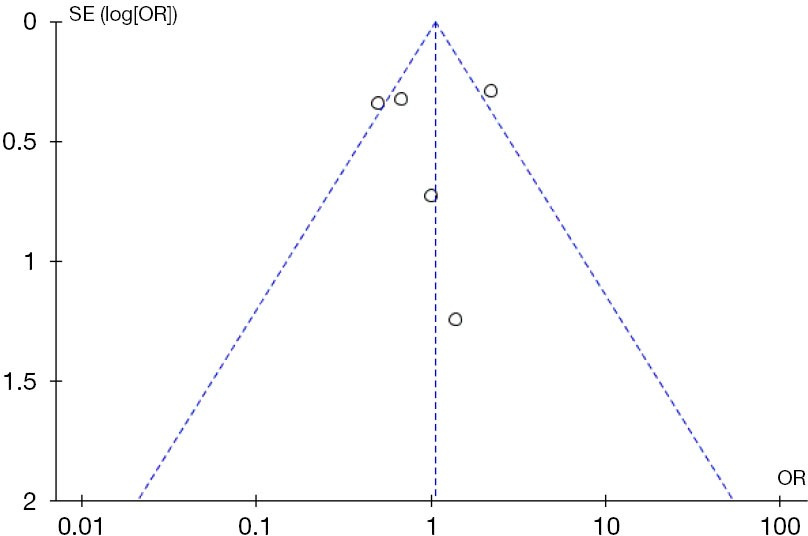 PN for the management of T1a tumors has evolved during the last two decades, which may become the standard care for T1b tumors as well, demonstrating oncological safety and renal function preservation (26). PN is already an established and widely adopted approach for the surgical treatment of renal masses (27), and contemporary studies have demonstrated its feasibility in more complex cases with the growing experience with this technique (28-30). Nonetheless, PN is still a challenging technique for the treatment pT3a tumors and its utility in this setting warrants further debates. In this study, we compared the survival outcomes of patients with pT3a tumors who underwent PN with those treated by RN.

The safety of PN for T3a tumors has already been addressed in some studies, most of them suggesting equivalent oncological outcomes when comparing PN with RN. However, these studies included all types of surgical modalities, incorporated cases with aggressive tumors characteristics other than pathological T3a, or used prior T3a classification. In a recent multi-institutional study, Oh and colleagues (31) demonstrated that PN had lower recurrence rate comparable with RN in the subset pathological T3a and supported the notion that, for selected cases, PN is a safe treatment even in the face of adverse pathological findings.

Similarly, Weight et al. (19) noted no difference in OS for RN versus PN in pT3a patients. In recent years, it has been reported that PN not only can control the tumor progression, but also reduces the risk of postoperative chronic renal insufficiency and improves the long-term quality of life. However, the renal blood vessels are rich and the tissue is relatively brittle. The vascular end of the surgical wound of the kidney may form a pseudoaneurysm, arteriovenous fistula, etc., resulting in renal hematoma or hematuria after surgery. At present, there are relatively few reports on local recurrence after PN, but PN does not clearly indicate whether resection of the affected kidney is more likely to cause tumor recurrence and metastasis. From the perspective of underestimated risk of tumor margin positive, risk of serious complications and tumor control, we must pay attention to the high risk of PN. Bertolo (32) assessed the role of three-dimensional (3D) reconstruction in aiding preoperative planning for highly complex renal tumors amenable to robotic partial nephrectomy (RPN). After viewing the respective 3D reconstructions, in 148 cases the responders changed their idea: indication to RPN raised in 404 cases (74.5%) (P<0.001). The use of this technology might translate into a larger adoption of nephron-sparing approach, and more advanced technologies are needed in the future. Hansen (17) made a regression analysis of patients with tumor size >7.0 cm and found tumor size had no statistical significance to the survival outcomes [hazard ratio (HR): 0.67, 95% CI: 0.30–2.17]. Therefore, the outcomes of pT3a tumors could apply to cT3a tumors.

Our study had some limitations. First, the analysis of heterogeneity sources required more subgroup data. Second, the diagnostic criteria were inconsistent in the studies. Finally, this only nine studies were included in this analysis, more studies are still needed in future.

There were no differences in the CSS, OS, CSM, RFS, complications and positive surgical margin of the patients between RN and PN group. In pT3a RCC, RN did not provide a better survival benefit compared to PN. Considering PN has a good tumor control effect and can reduce the risk of postoperative chronic renal insufficiency, we suggest a universal application of PN for pT3a RCC.

There were no differences in the CSS, OS, CSM, RFS, complications and positive surgical margin of the patients between RN and PN group. In pT3a RCC, RN did not provide a better survival benefit compared to PN. Considering PN has a good tumor control effect and can reduce the risk of postoperative chronic renal insufficiency, we found PN is a good choice for pT3a RCC. PN for pT3 is a challenge for surgeons and requires experience. In the future, further large-sample, studies are needed.

We have invited Ms. Yu-Qing Wu to polish our language.

Reporting Checklist: The authors have completed the PRISMA reporting checklist. Available at http://dx.doi.org/10.21037/tau-20-1262

Conflicts of Interest: All authors have completed the ICMJE uniform disclosure form (available at http://dx.doi.org/10.21037/tau-20-1262). The authors have no conflicts of interest to declare.