Using data from the Movember GAP3 Consortium, the largest centralised prostate cancer (PCa) active surveillance (AS) database to date, we have previously shown that after 5 years of follow-up, about 56.4% of men who started on AS were still on AS (1). We noted substantial variation by centre, but signs of disease progression (27.5% of men) and conversion to active treatment without evidence of disease progression (12.8% of men) were the main reasons for discontinuation.

A wide variety of predictive factors, including clinical and pathological factors, multi-parametric MRI (mpMRI) data, variability in biopsy timing, and nomograms are currently proposed for men with low-risk PCa on AS (2,3). For example, Wang et al. compared the Kattan, Steyerberg, Nakanishi and Chun nomograms to calculate the likelihood of indolent disease as well as various forms of progression in 273 patients meeting low-risk criteria who were managed by AS and who underwent multiple biopsies and/or delayed radical prostatectomy (4). Based on this fairly small sample size, it was concluded that existing nomograms have only modest accuracy in predicting the outcomes of patients undergoing AS.

Moreover, a recent national survey in the US evaluated the current use of prediction tools and nomograms for localised PCa based on clinical practice from radiation oncologists and urologist. A fifth of specialists reported not using any such tools in clinical practice, mainly due to the low use of AS for low-risk PCa (5). It is exactly for these reasons that the Movember Foundation launched its Global Action Plan Prostate Cancer Active Surveillance initiative (GAP3) in 2014. Its primary goal is to create a global consensus with uniform guidelines on the selection and monitoring of men with low-risk PCa (6).

Following the assessment of reasons for discontinuation, we now aimed to develop a nomogram to be used as a prediction tool for outcomes in men with localised PCa on AS. We present the following article in accordance with the MDAR reporting checklist (available at http://dx.doi.org/10.21037/tau-20-1082).

By combining patient data from established AS cohorts worldwide, the global GAP3 database was created between 2014 and 2016. In addition to ethical approval for sharing digital patient data in a centralized global database, inclusion criteria required an active registry of AS patients over the last 2 years or more, including at least ~50 patients annually. To date, 25 centres from the USA, Canada, Australasia, the UK and Europe fulfilled the requirements for participation and joined the initiative (6) resulting in data for a total of 15,101 men on AS (GAP3 database v2.3.2). Each institution obtained institution ethical approval and signed a Movember End User License Agreement, Access Rights Principles Agreement, and the commonly agreed upon GAP3 analytical plan for the use of routinely collected anonymised clinical data. The study has conformed to the provisions of the Declaration of Helsinki (as revised in 2013). Details of ethical approval for each individual institution can be found in our cohort profile (6).

The AS inclusion criteria for the participating centres have been shown previously (1); despite the variation in protocols, most centres agreed that the most suitable patients for AS are those with age >18, pre-treatment clinical stage T1–T2, serum PSA ≤10 ng/mL, a biopsy Gleason grade group of 1 or 2, and a maximum of two tumour-positive biopsy core samples. An overview of contemporary worldwide AS practices across the world (and included in GAP3) can also be found in the systematic review by Kinsella et al. (7) and the cohort profile of the GAP3 database (8).

Apart from the inclusion criteria, there is also some variation in follow-up protocols. However, almost all protocols recommended serial measurements (with a variation in time-intervals) of serum PSA levels, digital rectal examination (DRE) and surveillance biopsy sampling in order to identify pathological progression. An overview of the AS follow-up protocols in GAP3 can be found in our previous publications (1,6). For the current analyses, we have grouped centres according to similarities in follow-up protocols (high, intermediate, and low)—the term “groups” in the results section hence refers to these different AS follow-up protocols. The high group includes those centres that performed a biopsy on an annual basis (Johns Hopkins, Atlanta, Lille, Singapore, Kagawa, UCSF, and MD Anderson), whereas the intermediate group includes those centres where the follow-up biopsy was taken about 2 years after AS initiation (Memorial Sloan Kettering, Calgary, Baden, Cambridge, Valencia, MUSIC, Dublin, and Milan-PRIAS), and the low group refers to those centres that followed the PRIAS criteria, i.e., 1, 4, and 7 years after AS initiation (Erasmus, Vancouver, Helsinki, Malmo, Melbourne, and Toronto, and Milan-SAINT). Hence, a total of 14,380 men were included in the analyses. The median age of the total population was 65 with IQR 60–70.

The main aim of the study was to create a nomogram to predict disease progression when on AS for PCa. First, we conducted cause-specific Cox proportional hazards regression to estimate the hazard ratio (HR) of disease progression and competing risks (watchful waiting, conversion to active treatment, or death) based on centre (i.e., exposure variable). The heterogeneity of prevalence of clinical factors and their relationship to disease progression was studied by dichotomising the clinical factors and modelling the univariable HRs of clinical factors by centre. Following the univariable analysis by centre, we then adjusted for age, year of diagnosis, Gleason grade group, number of positive cores, and PSA. Johns Hopkins was selected as the reference centre because it is one of the largest centres in the study and its patients characteristics are close to the average.

To further investigate heterogeneity in baseline upgrading risk between centres we estimated Cox frailty models. These frailty models include a random effect term for centre and the difference in upgrading risk between centres is parameterized using the variance of the frailty term. To aid the interpretation of the results we transformed the variance term to the median hazard ratio (MHR) (9). The MHR can be interpreted as the MHR of disease progression when moving a patient from a randomly chosen centre to a randomly chosen centre with a higher disease progression risk (Or comparing a patient with the same characteristics between two randomly chosen centres). We calculated the MHR using a frailty model not including any patient and tumour characteristics and investigated whether differences in included patients could partially explain the observed heterogeneity by adjusting for characteristics included in the previous analyses.

All statistical analyses were performed in R. Statistical codes are available upon request.

Tables 1-3 show reasons for AS discontinuation the three groups of centres based on their study protocol for follow-up. In the centres that performed a biopsy on an annual basis (Table 1) and the centres that followed the PRIAS criteria (Table 3), the majority of patients in most of the centres discontinued due to treatment for disease progression. In the centres where the follow-up biopsy was taken more than a year after AS initiation (Table 2), the main reason for discontinuation was either treatment for disease progression or conversion to watchful waiting or active treatment (without evidence of progression). 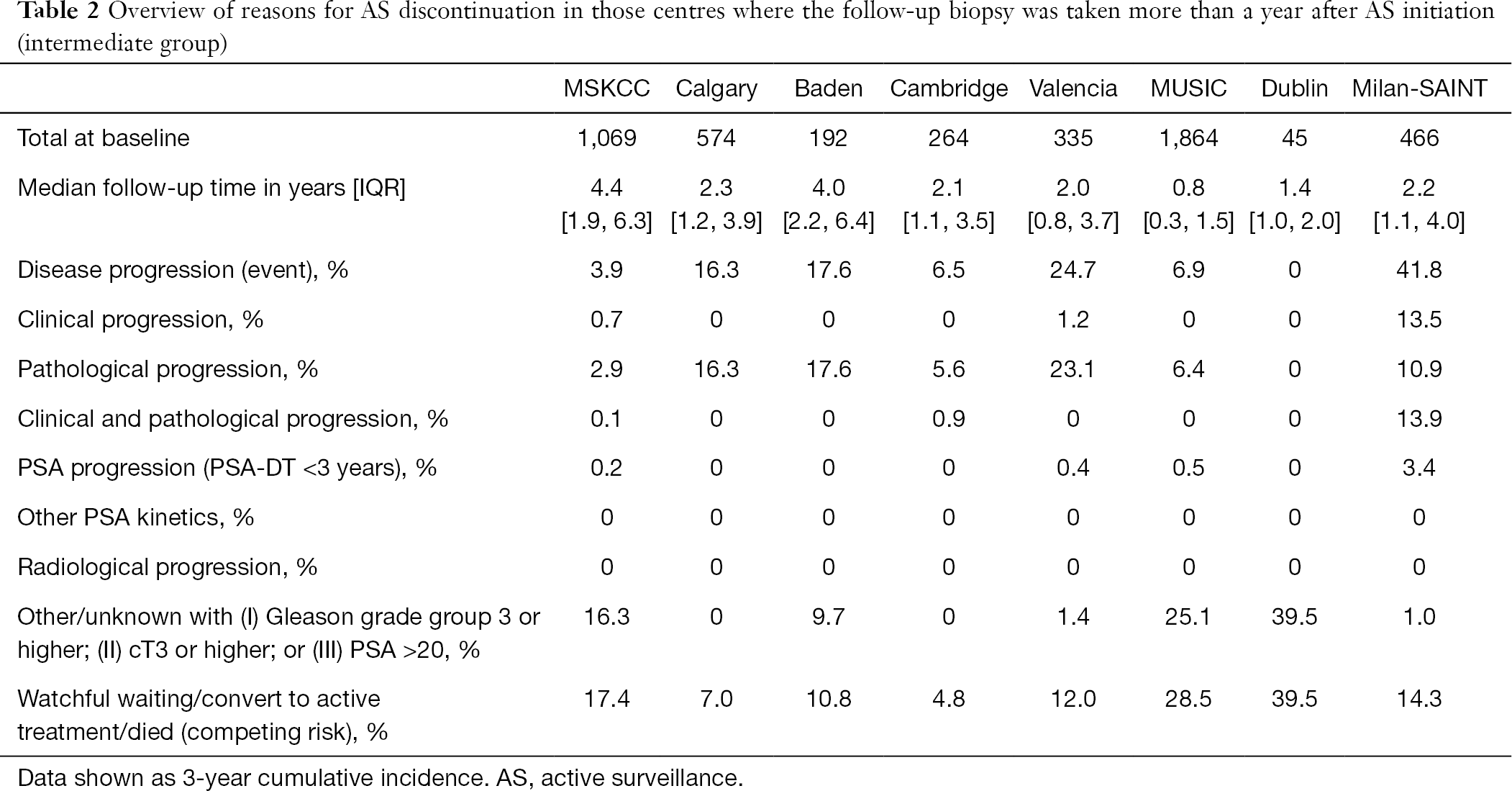 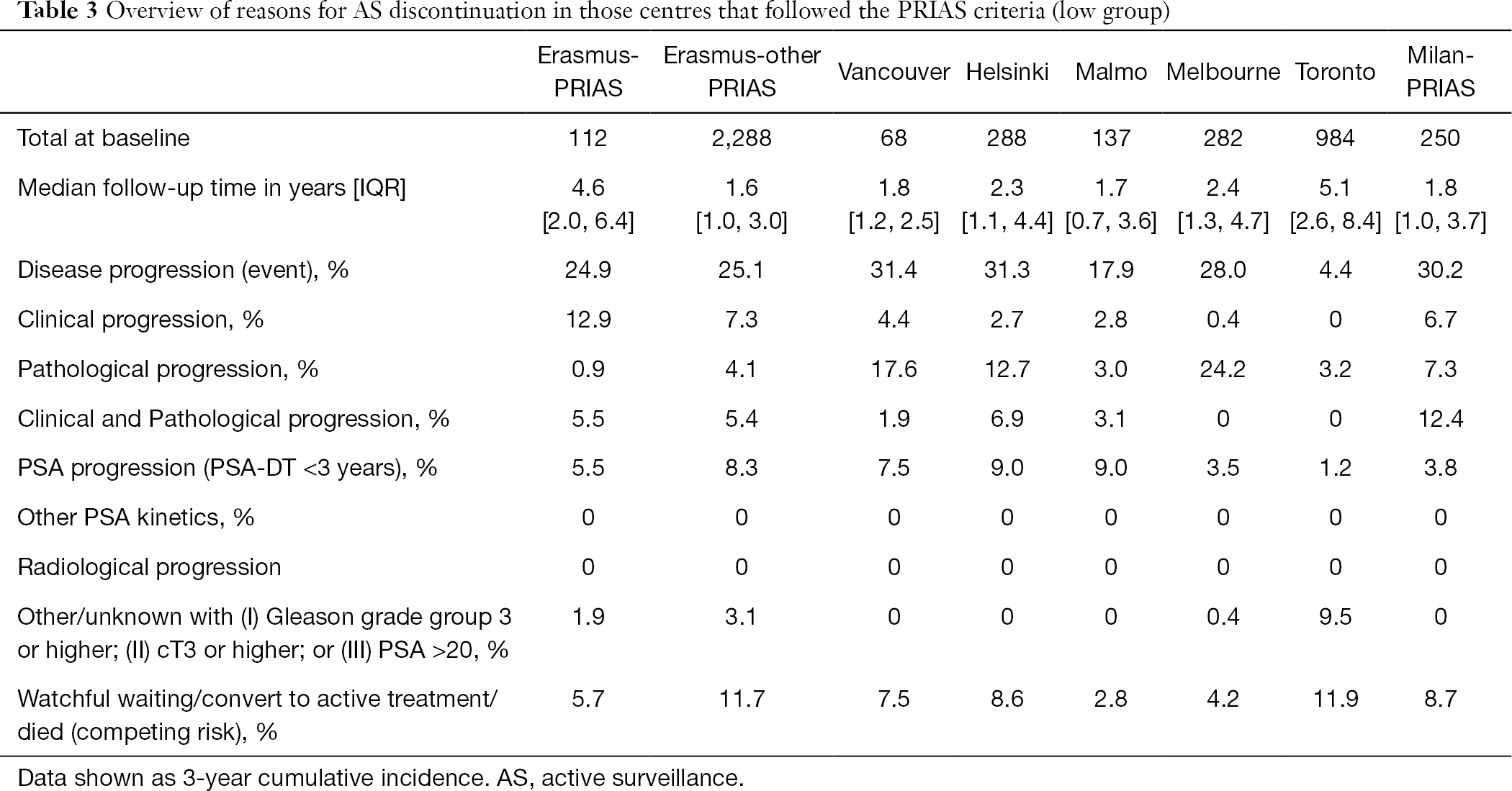 We performed univariable heterogeneity analysis for disease progression whilst considering all other reasons for discontinuation as censoring events. Figure 1 illustrates this graphically by showing the distribution of HRs for both conversion to active treatment as well as progression. In each group, there was considerable variability in the disease progression rate (MHR: 2.5, Figure 2). 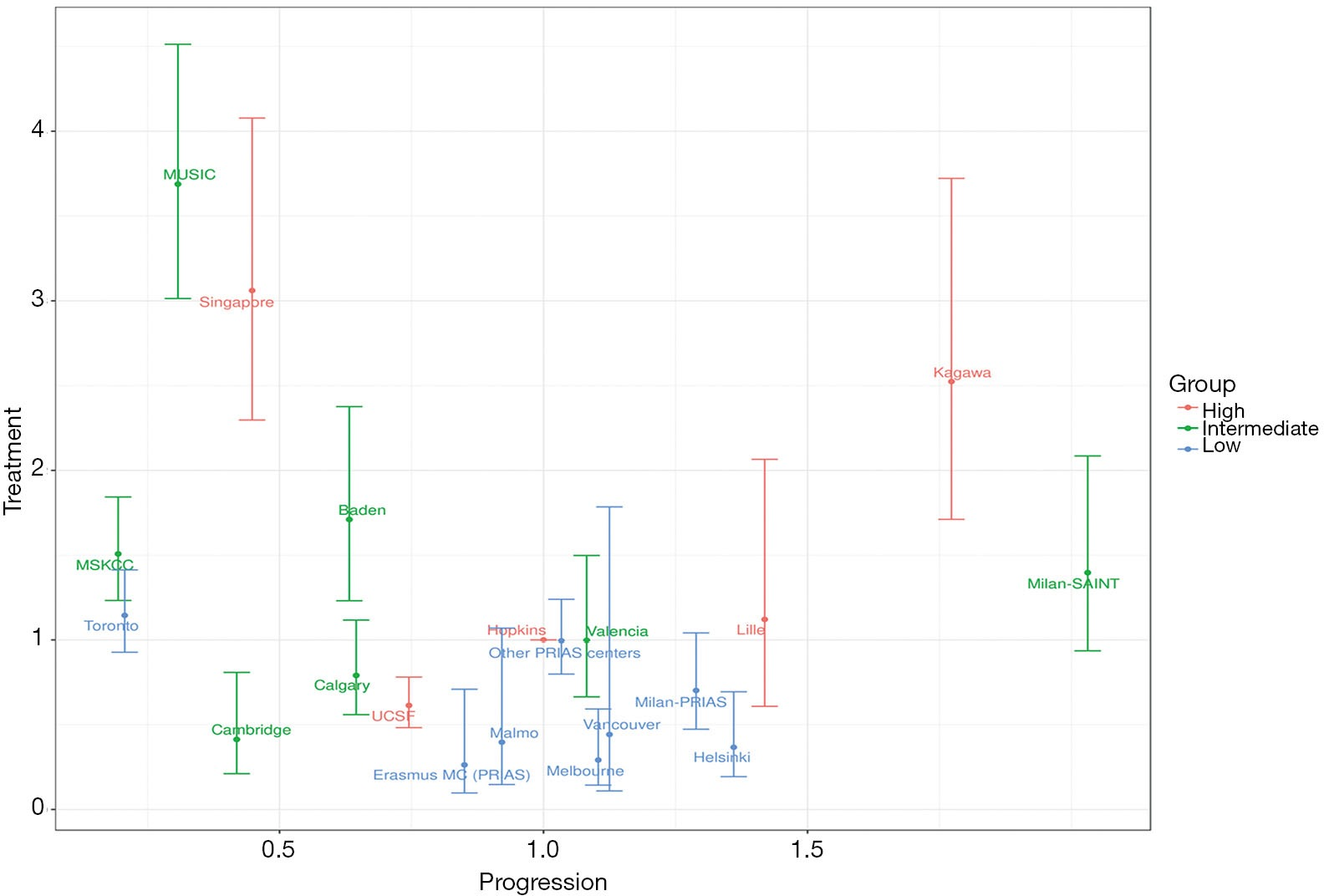 Figure 1 Univariable heterogeneity analysis, as quantified by hazard ratios (HRs), for disease progression (X-axis) and conversion to active treatment (Y-axis), whilst considering all other reasons for discontinuation as competing risks. 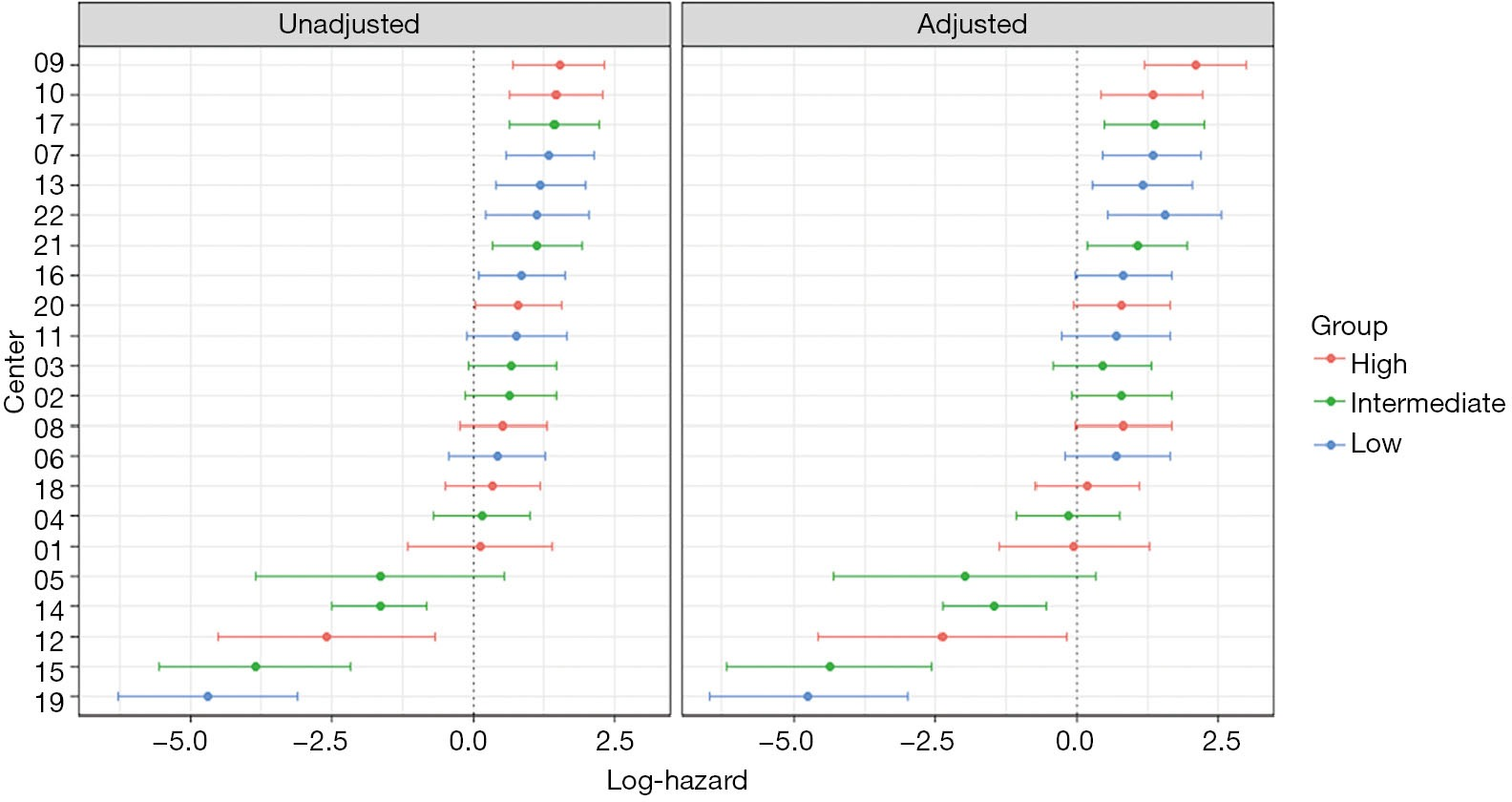 Figure 2 Log-hazard and 95% confidence intervals (X-axis) for disease progression based on centre. The adjusted model takes into account age, year of diagnosis, Gleason grade group, and number of positive cores.

The current European guidelines suggest that a large proportion of men with localized PCa do not require immediate radical treatment, but can be safely monitored using AS (10). Yet, despite the potential to monitor this low-risk PCa long-term with very little risk of disease progression (<0.03% over 15 years) (7), uptake of AS varies across countries and practices (11) and drop-out is reported to be as high as 38%—even where there is no evidence of disease progression (7). As mentioned previously, in our own GAP3 cohort we found that after 5 years of follow-up, about 43% of men who started on AS discontinued (1).Conversion to active treatment without evidence of disease progression was indeed one of the main reasons for discontinuation (12.8%). Low acceptability of AS may result into overtreatment, unnecessary adverse events, and a higher health economic burden—hence, justifying the need for the development of a worldwide nomogram.

There is a need to develop a nomogram to predict disease progression in men suitable for AS with an optimal balance between sensitivity and specificity as current nomograms have only been found to show limited accuracy in predicting outcomes of these men (4). The various risk prediction tools available to date have shown potential, though all in limited settings. For example, Iremashvili et al. compared the probabilities of pathologically relatively aggressive disease using the Partin and Dinh risk tables and Kattan, Truong, and Kulkarni nomograms using a cohort of 326 PCa patients. It was found that the predictions of Partin and Dinh tables were not associated with biopsy progression, whereas the predictive value of Kattan and Truong nomograms was higher when compared with the other tools—though only for the first and second surveillance biopsies. The latter two nomograms were also able to identify low and high-risk subgroups, though the Kattan nomogram was found to show better correlation with the observed progression rate (12). Hence, using a large worldwide database including various centres, we aimed to develop a more widely applicable nomogram.

As already shown in our previous publications (1,6,13-16), Movember’s GAP3 database provides a unique opportunity to assess worldwide data in the setting of AS for men with localised PCa. However, some limitations exist because not all centres could be included in our analyses due to the lack of information on data for discontinuation. Moreover, there is heterogeneity in study protocols and data collection across centres. Nevertheless, our findings show that this heterogeneity in clinical factors and follow-up protocols does not explain the heterogeneity in risk of disease progression as such (Figure 2). It is therefore of interest to further disentangle this real-world data resource as it can help the development of a global nomogram. The next update of the GAP3 database will help address this next step of the development of a global nomogram as the database will then also contain information on imaging (MRI), molecular (genomics) markers, and patient-related outcomes.

Our findings of unexplained differences in baseline hazards for disease progression and consistent effects of clinical predictors between centres in the GAP3 database indicate that it is possible to develop a global nomogram in future. A next step involves the development of mathematical methods for local adjustments for differences in risk of disease progression and competing risks (e.g., watchful waiting, conversion to active treatment, or death) based on further examination of the underlying reasons for this heterogeneity.

Funding: This work was supported by the Movember Foundation.

Reporting Checklist: The authors have completed the MDAR reporting checklist. Available at http://dx.doi.org/10.21037/tau-20-1082

Conflicts of Interest: All authors have completed the ICMJE uniform disclosure form (available at http://dx.doi.org/10.21037/tau-20-1082). The authors have no conflicts of interest to declare.

Ethical Statement: The authors are accountable for all aspects of the work in ensuring that questions related to the accuracy or integrity of any part of the work are appropriately investigated and resolved. The study has conformed to the provisions of the Declaration of Helsinki (as revised in 2013).