Benign prostatic hyperplasia (BPH) is a high incidence disorder in elderly men the pathogenesis of which is multifactorial and largely unknown (1). Epithelial-mesenchymal transition (EMT), a process whereby epithelial cells losing epithelial characteristics and acquiring a mesenchymal phenotype, has been confirmed to participate in the pathogenesis of BPH (2-4). Moreover, the aberrant growth of prostate stromal cells has also been discovered to be a contributing factor in the processes of BPH (5-7).

Transforming growth factor beta 1 (TGF-β1) has been demonstrated excessively secreted by stromal cells into the stromal microenvironment during BPH, affecting the biological processes of epithelial cells and stromal cells (8,9). Resveratrol (trans-3,5,4-trihydroxystilbene) is a natural polyphenol and is widely exist in mulberries, grapes, peanuts, polygonum cuspidatum and other plants (10). Studies have identified resveratrol as an effective agent in treating various illnesses, including BPH (11,12). In addition, many researches indicated resveratrol could reverse the biological effects induced by TGF-β1 via repressing phosphorylation of Smad2 and Smad3 (13,14).

Long noncoding RNAs (lncRNAs) belong to a group of noncoding RNAs which have over 200 nucleotides in length (15). They participate in progressions of a wide range of diseases through regulating several biological proceedings, including cell differentiation, EMT, apoptosis and proliferation (16). Nevertheless, there are extremely few studies on lncRNAs in BPH. A recent study identified a highly expressed lncRNA DNM3OS in prostate stromal tissues of BPH and uncovered the roles of DNM3OS in promoting prostate stromal cells transformation (17). In that study, they also found another lncRNA DIO3 opposite strand (DIO3OS) significantly upregulated in prostate stromal tissues of BPH. Nevertheless, the functions and mechanisms of DIO3OS in BPH remained unclear. Hence, we intended to investigate DIO3OS in BPH in the present study.

We present the following article in accordance with the MDAR reporting checklist (available at http://dx.doi.org/10.21037/tau-20-1169).

A total of 16 patients with BPH who underwent transurethral resection of the prostate were recruited at the at Shanghai Ninth People’s Hospital. Thirteen normal prostate tissues were acquired from bladder cancer patients who underwent radical cystoprostatectomy. Written informed consents were signed by all the participants. Current research was approved by the Ethical Committee of Shanghai Ninth People’s Hospital (No. 2017207) and strictly conformed to the 2013 Declaration of Helsinki.

Total RNAs were extracted from tissues and cells by employing TRIzol (Invitrogen) following the manufacturer’s instructions. To obtain nuclear and cytosolic RNAs, a PARIS Kit was used to separate subcellular fractions of cells before extracting RNAs. RNAs were reversely transcribed into cDNAs with a PrimeScript RT reagent kit (Takara, Japan). qPCR was carried out using SYBR real-time PCR kits (Takara). mRNA expression was calculated based on an internal control GAPDH. Expression of miRNAs were detected by a mirVanaTM qRT-PCR microRNA Detection Kit (Ambion, USA) and normalized to U6 expression.

The wild type or mutant type fragment of DIO3OS, CTGF 3’UTR or ZEB1 3’UTR containing predicted miR-656-3p or miR-485-5p binding site was constructed into a pMIR-REPORT vector (Thermo Scientific). The luciferase reporters were co-transfected into cells together with miRNAs mimics. Luciferase reporter assay system (Promega) was employed to test luciferase activities after 48 h.

EMT of BPH-1 cells was evaluated by observing elongated fibroblast-like morphology with scattered distribution using a phase contrast microscope. The expressions of EMT biomarkers including α-SMA, E-cadherin and N-cadherin were analyzed through qRT-PCR and Western blot assays as described above.

Proliferation of WPMY-1 cells were estimated by CCK-8 assay. Cells (5×103) were cultivated in a 96-well plate for 24 h before reagents treatment and transfection. CCK-8 reagents (MedChemExpress) were added into each well 24 h, 48 h and 72 h later. A microplate reader (Bio-Rad) was then applied to measure the absorbance at 450 nm. The expressions of cell cycle related genes including CCND1 and p21 were tested through qRT-PCR and Western blot assays as described above.

Subcellular localization of DIO3OS was identified via a FISH assay using a DIO3OS specific probe and Fluorescent in Situ Hybridization Kit (RiboBio, China). 4’,6-diamidino-2-phenylindole (DAPI) was used for nuclear labeling. Images were acquired with a fluorescence microscope (OLYMPUS, Japan).

RNA pull-down assay was used to find miRNAs which could bind to DIO3OS using a biotin-labeled DIO3OS probe (RiboBio) and streptavidin magnetic beads (Life Technologies, USA). RNAs were extracted with TRIzol from the complexes and subjected to qRT-PCR analysis to detect expressions of miRNAs.

Research data from at least three independent experiments were shown as the means ± SD. Differences among different groups were analyzed by Student’s t-test or one-way ANOVA with SPSS 17.0 software (IBM, USA). P<0.05 was considered statistically significant.

In order to probe the role of DIO3OS in BPH, the expressions of DIO3OS in epithelial tissues and stromal tissues were detected by RT-qPCR, which showed that DIO3OS expressions were prominently upregulated in BPH tissues compared with normal prostate tissues (Figure 1A). DIO3OS level was also found to be higher in stromal tissues than that of epithelial tissues of BPH (Figure 1B). We also demonstrated that DIO3OS could be significantly upregulated by TGF-β1 and downregulated by resveratrol in both BPH-1 cells and WPMY-1 cells (Figure 1C,D).

To explore the mechanism of TGF-β1 and resveratrol in mediating DIO3OS expression, we searched the JASPAR database and noticed a potential Smad2/Smad3/Smad4 complex binding site in DIO3OS promotor region (Figure 2A). Then, this site was validated by a luciferase reporter assay in which the luciferase activity was significantly enhanced by Smads (Figure 2B). Moreover, ChIP assay confirmed that the DIO3OS promotor region could interact with Smad2/Smad3/Smad4 complex (Figure 2C). More important, TGF-β1 could stimulate phosphorylation of Smad2 and Smad3 and resveratrol blocked TGF-β1 signaling via repressing phosphorylation of Smad2 and Smad3 in both BPH-1 cells and WPMY-1 cells (Figure 2D,E). Consider with the previous results, we concluded that TGF-β1 and resveratrol mediated DIO3OS expression in a Smads dependent manner. 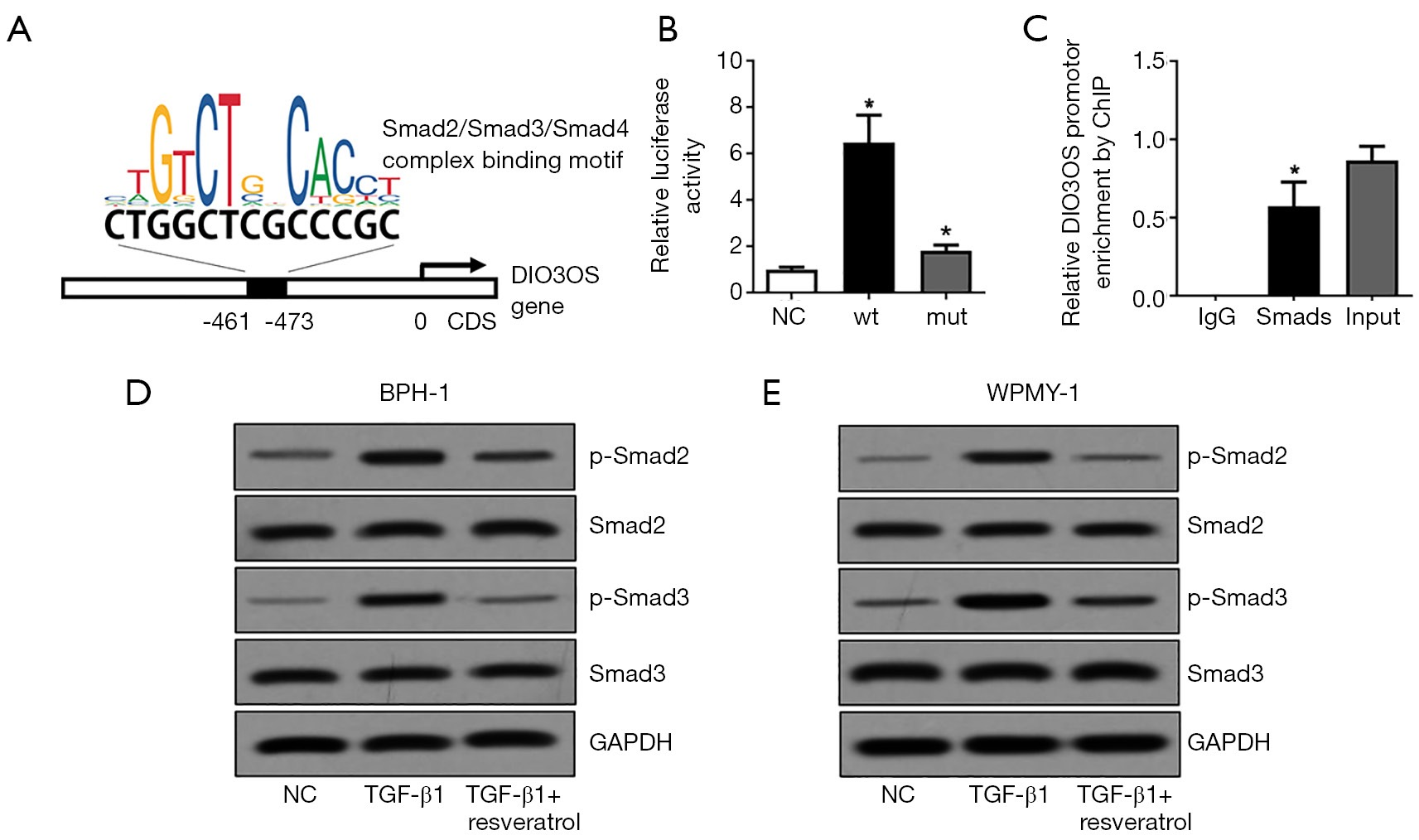 Figure 2 TGF-β1 and resveratrol mediates DIO3OS expression in a Smads dependent manner. (A) Potential Smad2/Smad3/Smad4 complex binding site in DIO3OS promotor region. (B) Validation of the predicted binding site by a luciferase reporter assay. (C) Validation of the interaction between DIO3OS promotor region and Smad2/Smad3/Smad4 complex by ChIP assay. (D,E) Phosphorylation of Smad2 and Smad3 in both BPH-1 cells and WPMY-1 cells mediated by TGF-β1 and resveratrol were analyzed by Western blot assay. *, P<0.05. 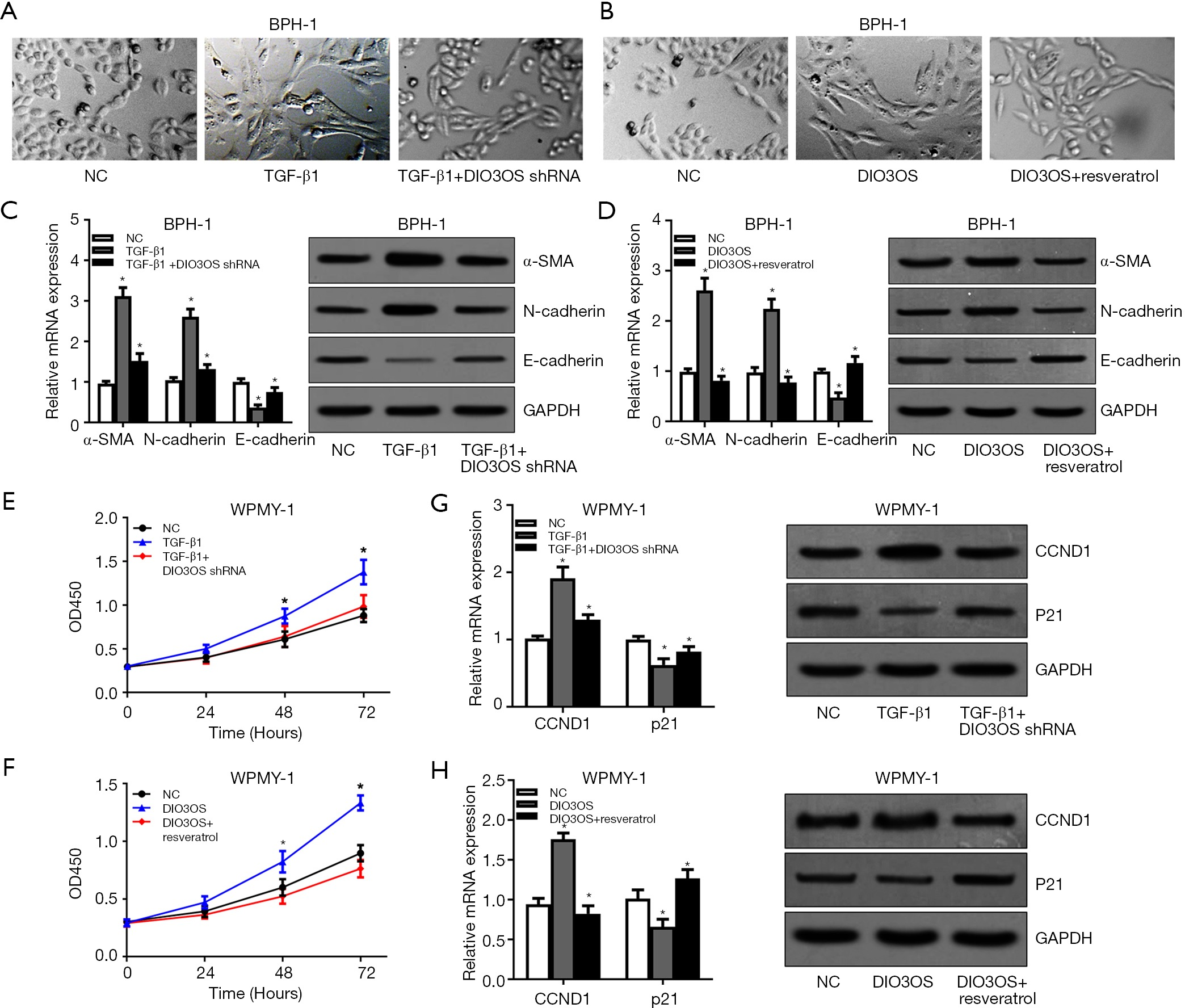 Figure 3 TGF-β1 promotes BPH-1 cells EMT and WPMY-1 cells proliferation via DIO3OS which can be blocked by resveratrol. (A,B) EMT of BPH-1 cells caused by TGF-β1, DIO3OS and resveratrol were evaluated by observing elongated fibroblast-like morphology with scattered distribution. (C,D) The mRNA and protein levels of EMT biomarkers including α-SMA, E-cadherin and N-cadherin were analyzed by qRT-PCR and Western blot assays. (E,F) Proliferation of WPMY-1 cells modulated by TGF-β1, DIO3OS and resveratrol were determined by CCK8 assays. (G,H) The mRNA and protein expressions of cell cycle related genes including CCND1 and p21 were tested with qRT-PCR and Western blot assays. *, P<0.05. 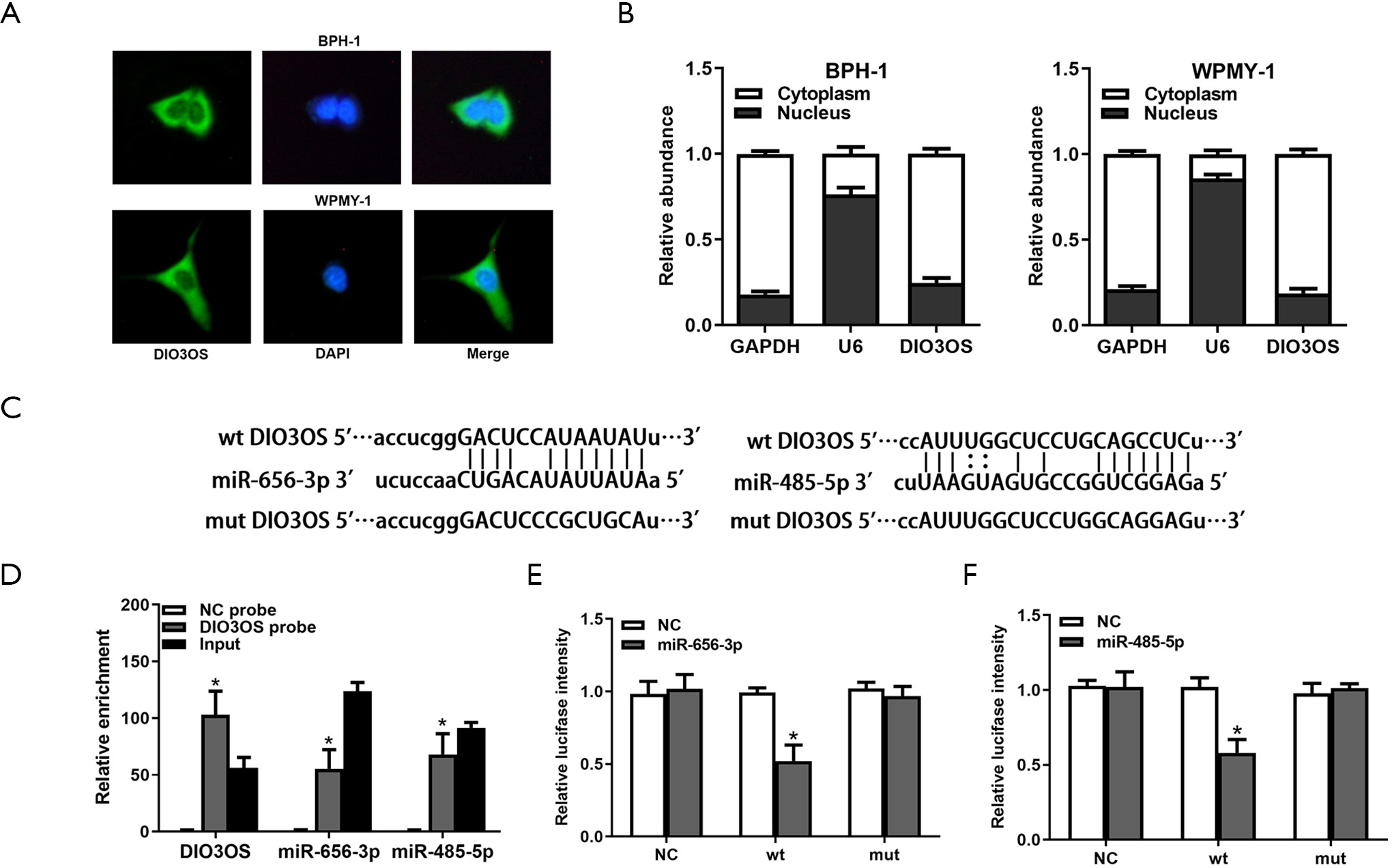 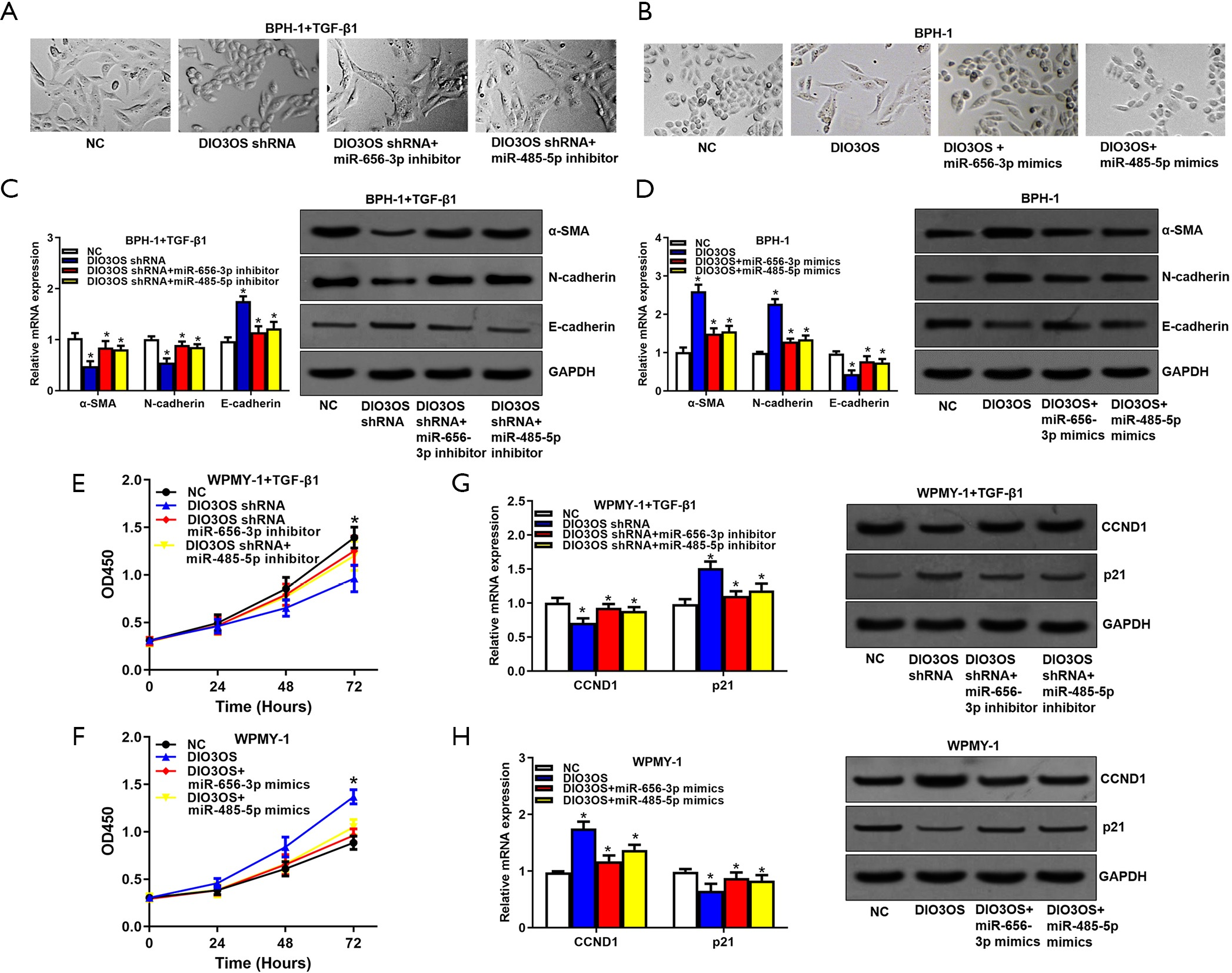 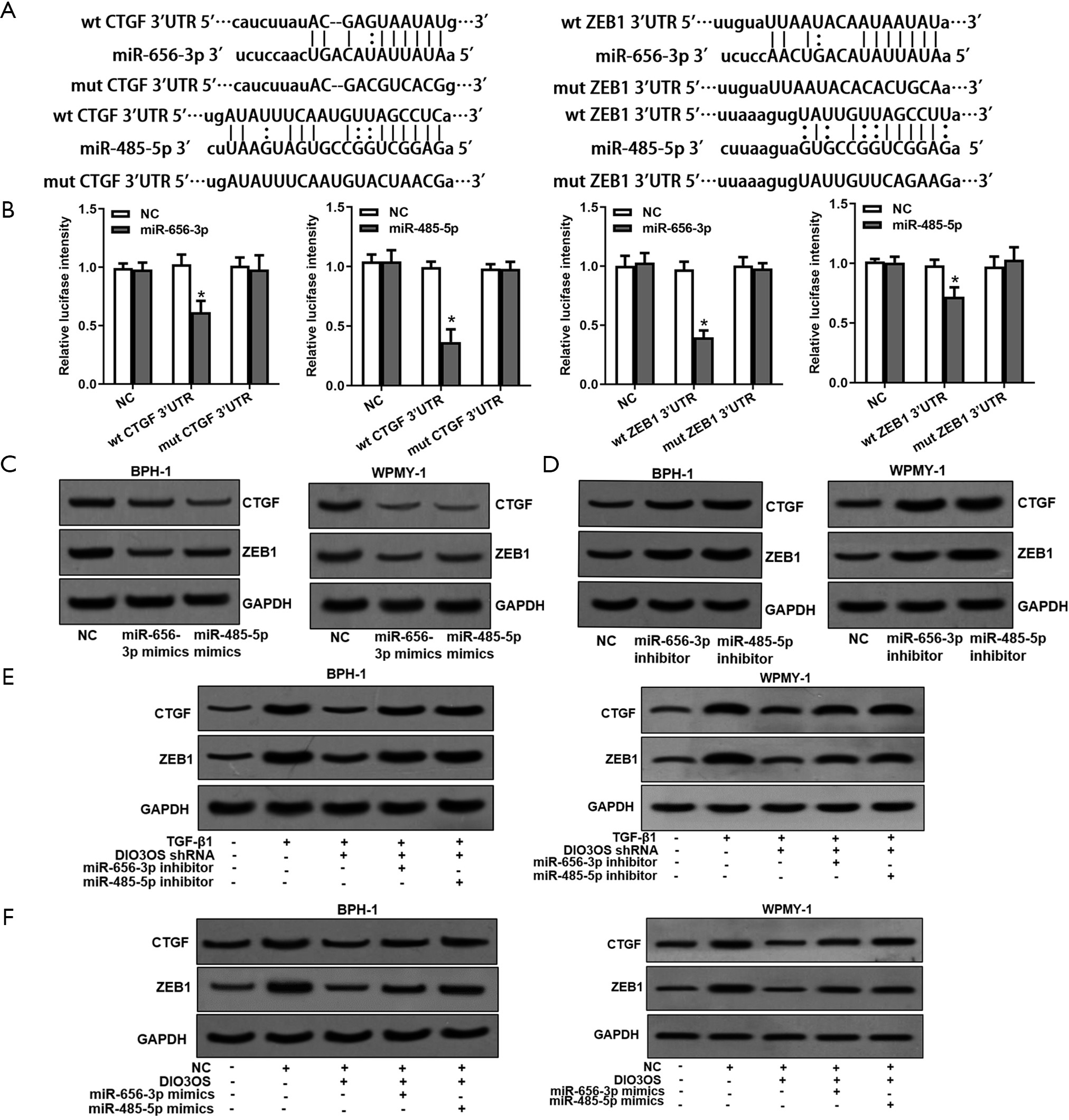 Emerging evidences indicate that the changes in lncRNAs are associated with the development of multiple diseases (16). Nevertheless, there are extremely few studies on lncRNAs in BPH. Herein, we identified a lncRNA DIO3OS which was significantly upregulated in BPH. In inflammatory bowel disease, the expression of DIO3OS is evidently decreased in tissues and plasmas of patients compared with in healthy individuals (20). DIO3OS probably also plays a role in Zearalenone mediated toxic effects on reproduction and development (21). In pancreatic cancer, DIO3OS facilitates PC cells growth and invasion by modulating the expression of ALDOA via miR-122 (22).

In current study, we displayed that DIO3OS could be upregulated by TGF-β1 and downregulated by resveratrol in both BPH-1 and WPMY-1 cells. Smad2/Smad3/Smad4 complex could bind to the DIO3OS promotor region and thereby enhanced its transcription. Hence, TGF-β1 and resveratrol mediated DIO3OS expression in a Smads dependent manner. Then, we showed that TGF-β1 promoted BPH-1 cells EMT and WPMY-1 cells proliferation via DIO3OS and this effect could be blocked by resveratrol.

Furthermore, our data revealed CTGF and ZEB1 were targets of both miR-656-3p and miR-485-5p and could be restrained by miR-656-3p and miR-485-5p. CTGF is an extracellular matrix-associated protein and a member of the CCN proteins family which functions in many cellular proceedings, including cell migration, proliferation, adhesion, and fibrosis (29). ZEB1 is the basic element of transcription factor network that mediates EMT and has been confirmed to be a vital molecule in the control of proliferation, differentiation, and metastasis (30). Both CTGF and ZEB1 are critical downstream molecules that response to TGF-β signals and involved in cellular and biological processes of cell proliferation and EMT (31,32). We consider that these factors including TGF-β1, resveratrol, DIO3OS, miR-656-3p and miR-485-5p finally realize their biological effects through modulating CTGF and ZEB1.

All in all, in our study, we verified that DIO3OS is highly expressed in BPH tissues and regulated by TGF-β1 and resveratrol in a Smads dependent manner. DIO3OS promotes BPH-1 cells EMT and WPMY-1 cells proliferation by upregulating CTGF and ZEB1 via miR-656-3p and miR-485-5p.

Reporting Checklist: The authors have completed the MDAR reporting checklist. Available at http://dx.doi.org/10.21037/tau-20-1169

Conflicts of Interest: All authors have completed the ICMJE uniform disclosure form (available at http://dx.doi.org/10.21037/tau-20-1169). The authors have no conflicts of interest to declare.

Ethical Statement: The authors are accountable for all aspects of the work in ensuring that questions related to the accuracy or integrity of any part of the work are appropriately investigated and resolved. Written informed consents were signed by all the participants. Current research was approved by the Ethical Committee of Shanghai Ninth People’s Hospital (No. 2017207) and strictly conformed to the 2013 Declaration of Helsinki.