With the development and extensive application of advanced imaging technologies such as ultrasound, computed tomography, and magnetic resonance imaging, an increasing number of adrenal incidentalomas are discovered in association with unrelated disorders, with a prevalence of 4–7% (1,2). Up to 50% of patients with adrenal incidentalomas may have hypercortisolism; the vast majority of such cases are subclinical Cushing’s syndrome (SCS) (3,4), which is characterized by abnormal biochemical indices of the hypothalamic–pituitary–adrenal (HPA) axis without the overt manifestations (e.g., moon face, buffalo hump, central obesity, plethora, striae rubrae, proximal myopathy, supraclavicular fat pad, thin skin, easy bruising, and unexplained osteoporosis or bone fractures) of Cushing’s syndrome (CS) (5-9). Diabetes mellitus (DM), cardiovascular events, hypertension, and vertebral fractures are common in patients with SCS (8,10,11).

There is no consensus on the clinical management of SCS (3,7); because of the absence of classic phenotypic features of CS, standard diagnostic tests for the latter are not applicable to SCS diagnosis (3). It is also unclear which treatment strategy [surgery or conservative (i.e., pharmacologic) treatment] should be considered first or which therapeutic regimen should be adopted prior to or following adrenalectomy (3). Compared to a conservative approach, adrenalectomy can effectively alleviate metabolic disturbances caused by SCS but may lead to adrenal insufficiency (AI) (12-17). Irrespective of cortisol level and the severity of hypercortisolism, most clinicians administer replacement therapy (RT) before, during, and after adrenalectomy (15,18-23); however, some only provide RT when serum cortisol concentration is <5 µg/dL (138 nmol/L) and/or when cosyntropin stimulation level is <18 µg/dL (497 nmol/L) in the morning after adrenalectomy (24), or to patients with plasma hypocortisolism or AI post surgery (25,26). In our medical team, hydrocortisone (200 mg) is intravenously administered once for AI. Given that acute Addisonian crisis is potentially fatal if untreated (26,27), timely identification of these patients is critical for avoiding adverse events.

The probability of developing postoperative AI is greater in patients with preoperative 1-mg dexamethasone suppression test (DST) >5 µg/dL (28). Reduced plasma adrenocorticotropic hormone (ACTH) concentration is a candidate marker for AI (29), but is by itself insufficient for diagnosis. Given the relationship between cortisol and inflammation as well as metabolism (i.e., of carbohydrates, lipids, and proteins), in this study we developed a quantitative predictive nomogram for postoperative RT based on a combination of multiple clinical indicators. We present the following article in accordance with the TRIPOD reporting checklist (available at http://dx.doi.org/10.21037/tau-20-1108).

Statistical analyses were performed with SPSS v23 (SPSS Inc., Chicago, IL, USA) or R v3.60 software. Data are presented as mean ± standard deviation. Comparisons between 2 groups were carried out with the t test or chi-squared test. Kaplan–Meier survival plots were generated along with the log-rank statistic using the survival package of R software.

We selected prognosis-related clinical parameters by univariate Cox proportional hazards regression (CPHR) analysis using the survival package of R software. CPHR is the most commonly used approach for analyzing survival data but is not suitable for multidimensional datasets (31). Therefore, using the glmnet package of R software, we applied the least absolute shrinkage and selection operator (LASSO) method for variable selection and shrinkage, which reduced coefficients toward zero along with the variance of these estimates (32). Finally, we constructed a model based on multiple clinical parameters identified by the LASSO method and multivariate CPHR to predict the therapeutic schedules of patients with SCS following adrenalectomy, which was visualized as a nomogram using the rms package of R software. A time-dependent receiver operating characteristic (ROC) curve and calibration curve were generated to assess the predictive performance of our model using the time ROC and rms packages, respectively, of R software. P values <0.05 were considered statistically significant except in univariate CPHR analysis, in which the significance level was set as P<0.1.

General characteristics of the study population 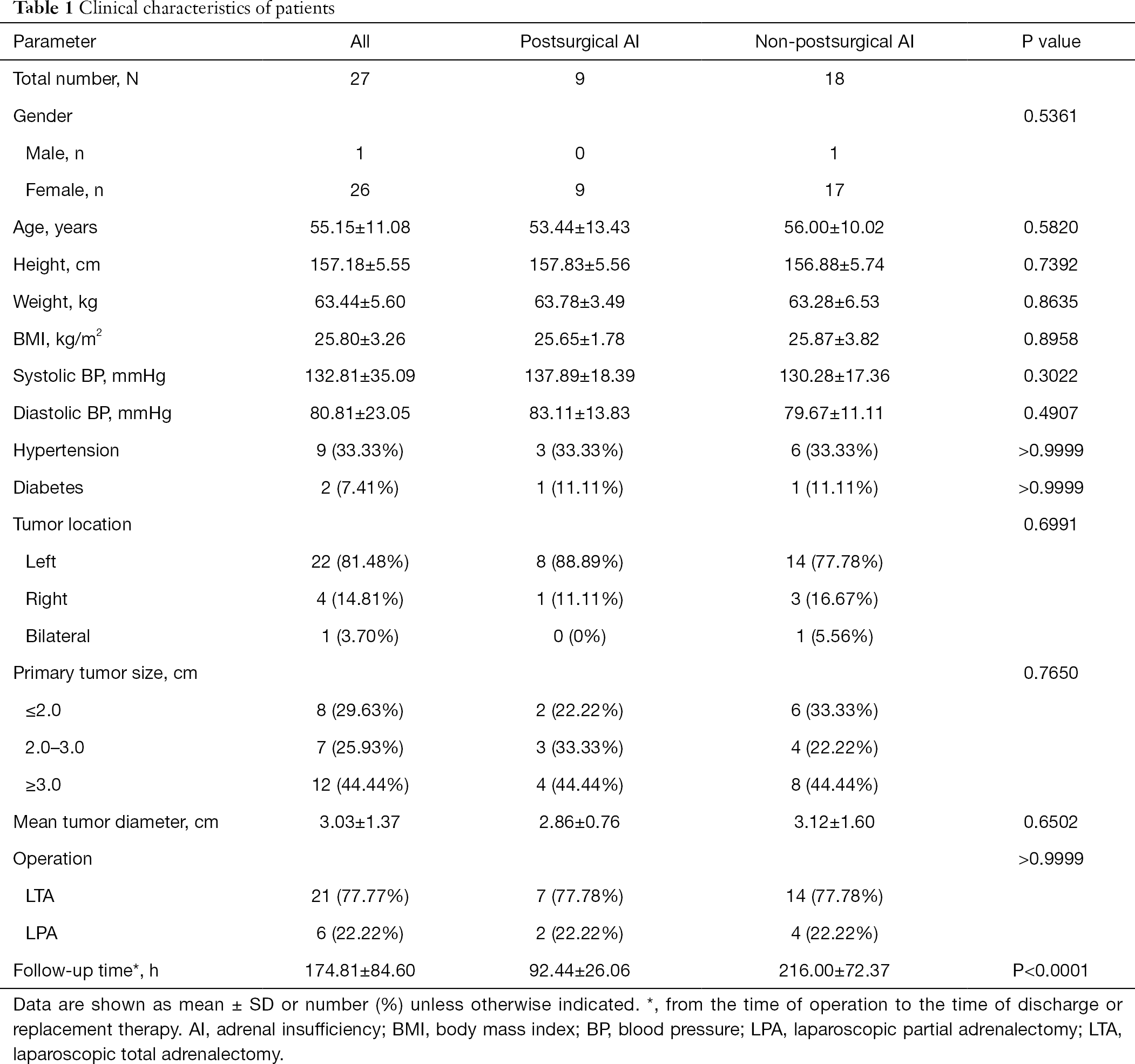 Differences in clinical parameters between NI and NAI groups 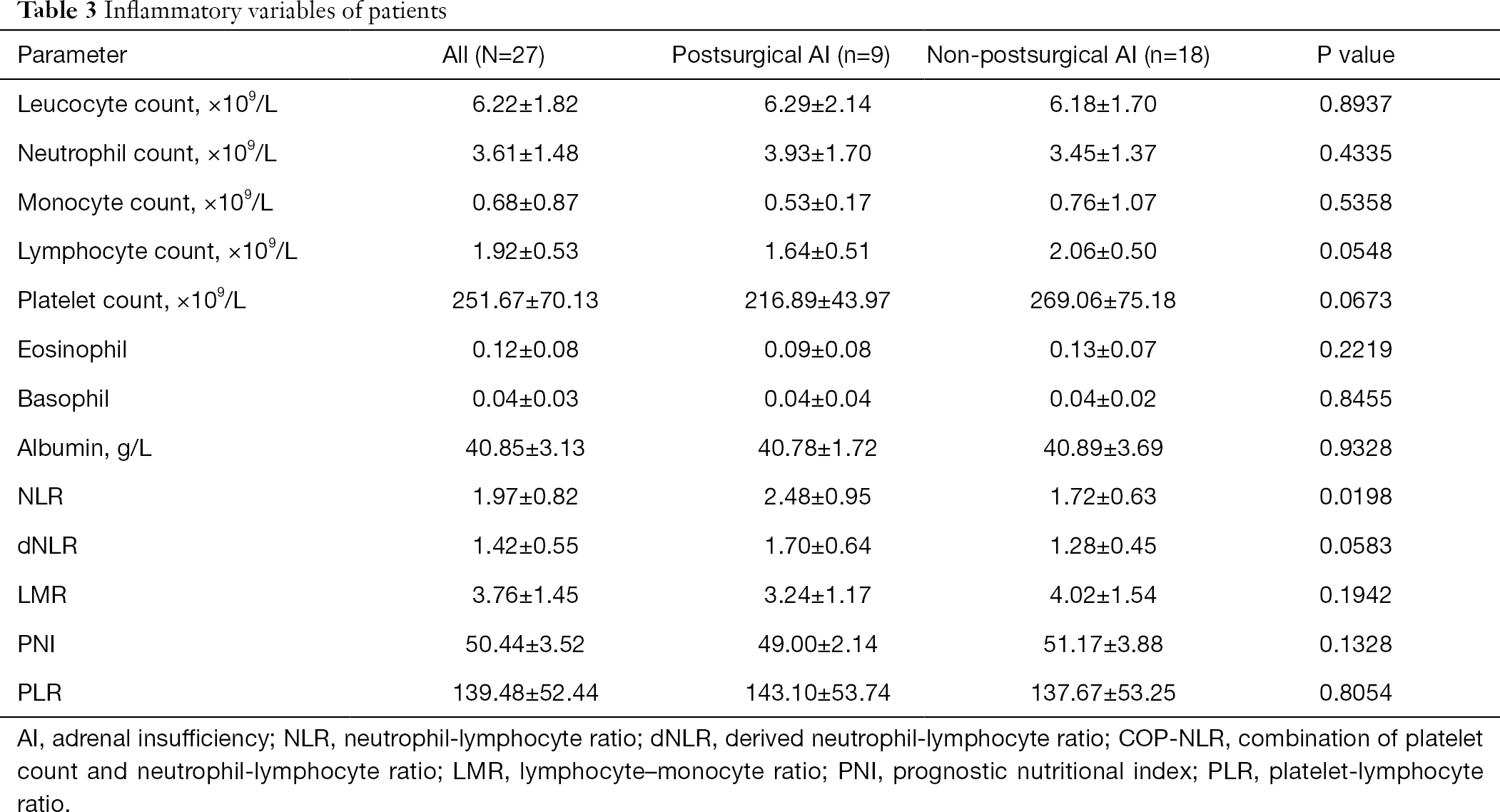 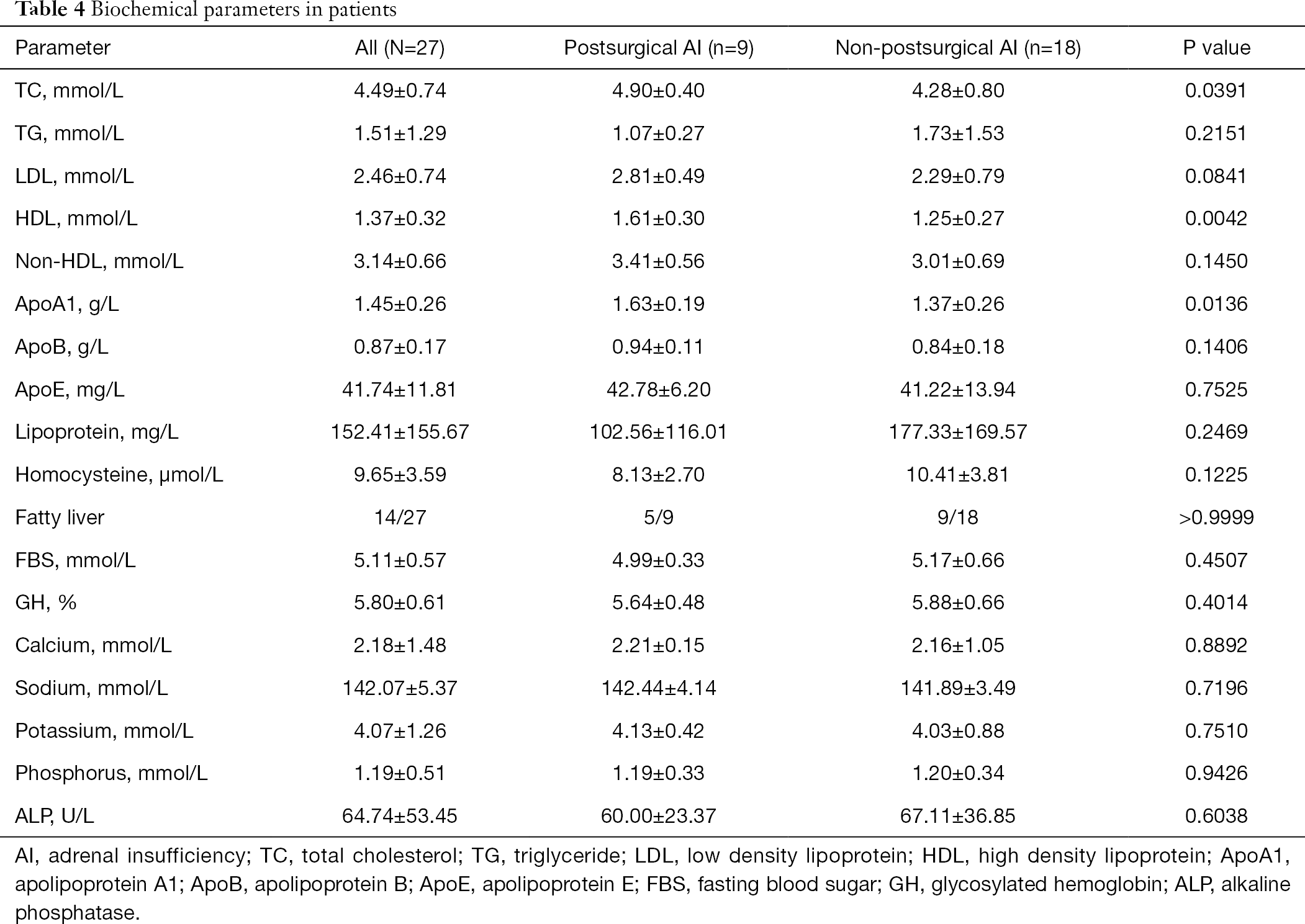 Construction of a prognostic model based on clinical parameters

In order to identify SCS patients with postoperative AI who would benefit from RT, we considered the time of surgery and time discharge or RT as the starting and end points, respectively. Parameters for which there was incomplete information such as height, weight, BMI, GH, etc. were excluded. To avoid excluding some potentially important factors, differences with a P value <0.10 were considered significant in the univariate CPHR analysis. Nine clinical parameters were initially selected—namely, HDL, ApoA1, NLR, dNLR, total cholesterol, lymphocyte, homocysteine, eosinophil count, and platelet count (Table 5). To avoid bias from collinearity among factors, we applied the LASSO Cox regression model and penalized maximum likelihood method to select factors that could most accurately predict RT in patients. A combination of 5 clinical parameters (ApoA1, NLR, total cholesterol, platelet count, and homocysteine) were identified as the best predictors of RT (Figure 1). These were used to calculate a risk score by multivariate CPHR (C-index=0.912, P=0.004). Total cholesterol had the highest hazard ratio (2660.76, P=0.045), followed by NLR (24.60, P=0.018) (Figure 2 and Table 5). Elevated total cholesterol (P=0.038), NLR (P=0.019), and ApoA1 (P<0.001) were correlated with postoperative treatment selection (Figure 3). Based on the median risk score (0.86), patients with SCS were stratified into low-risk (risk score ≤0.86, n=14) and high-risk (risk score >0.86, n=13) groups; the latter patients were more likely to require RT (Figure 3). 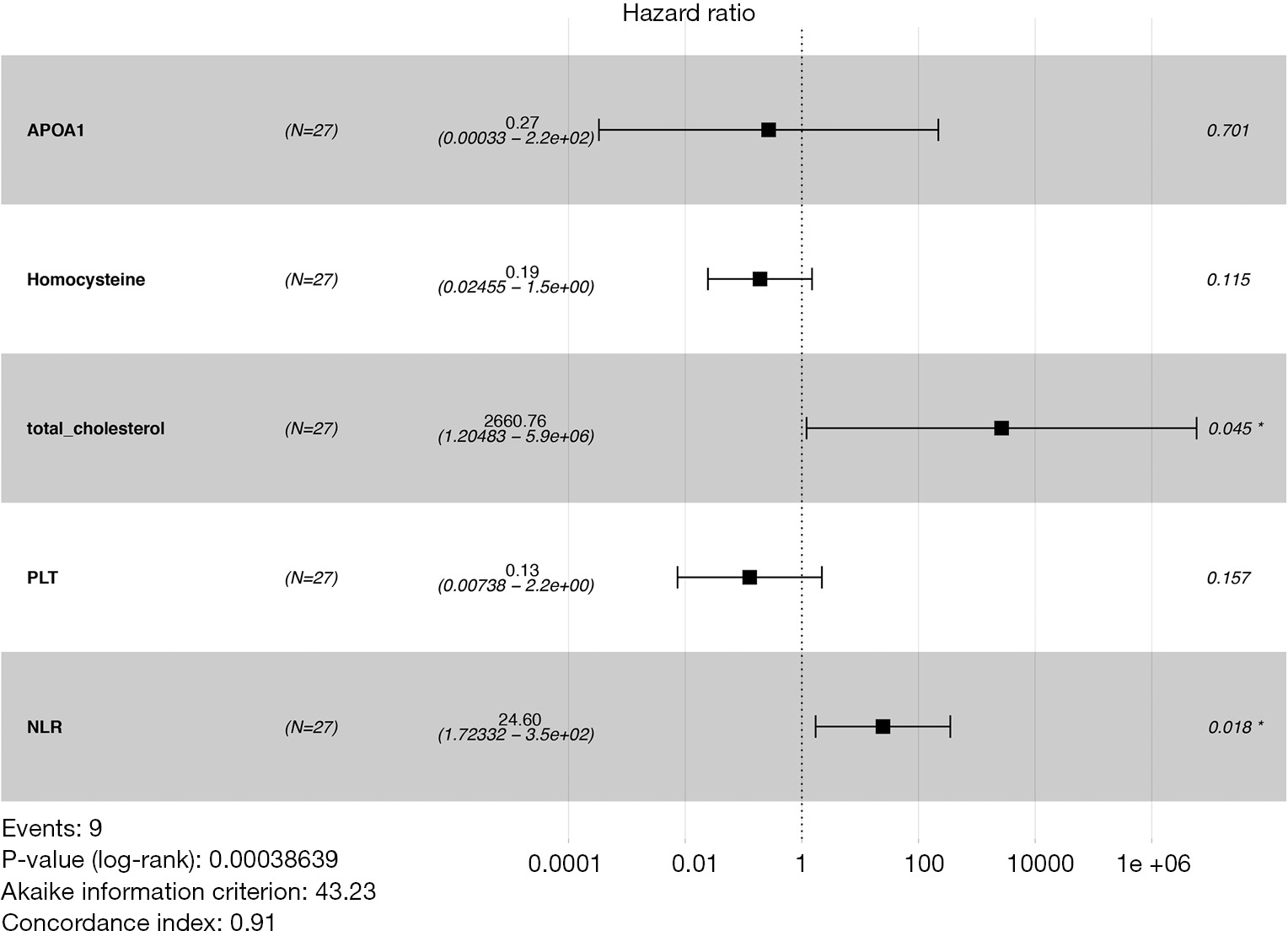 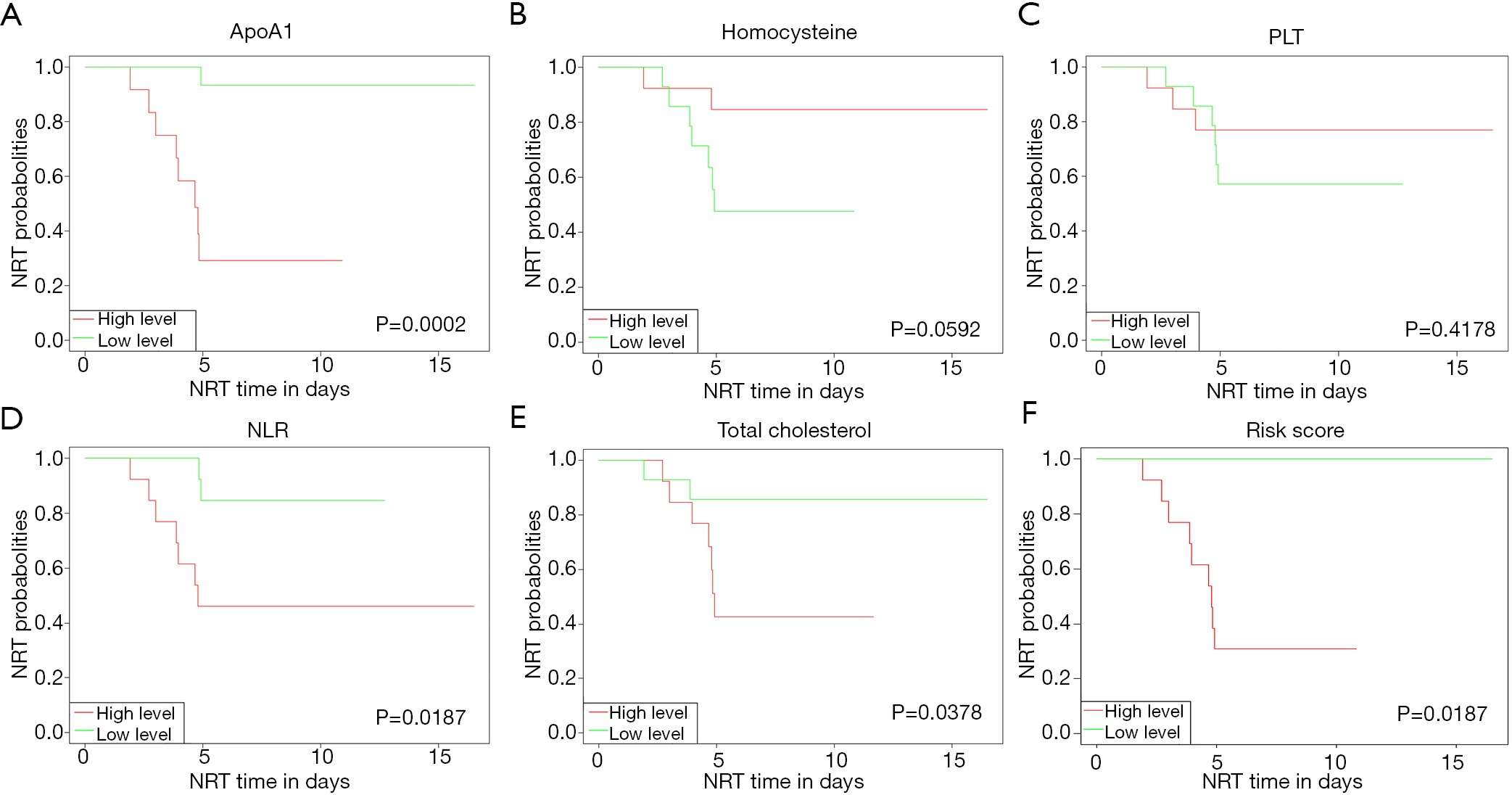 We developed a nomogram based on the above 5 independent RT-related markers to predict 3-, 4-, and 5-day NRT probability (Figure 4). The corresponding regression coefficients are shown in Table 5. 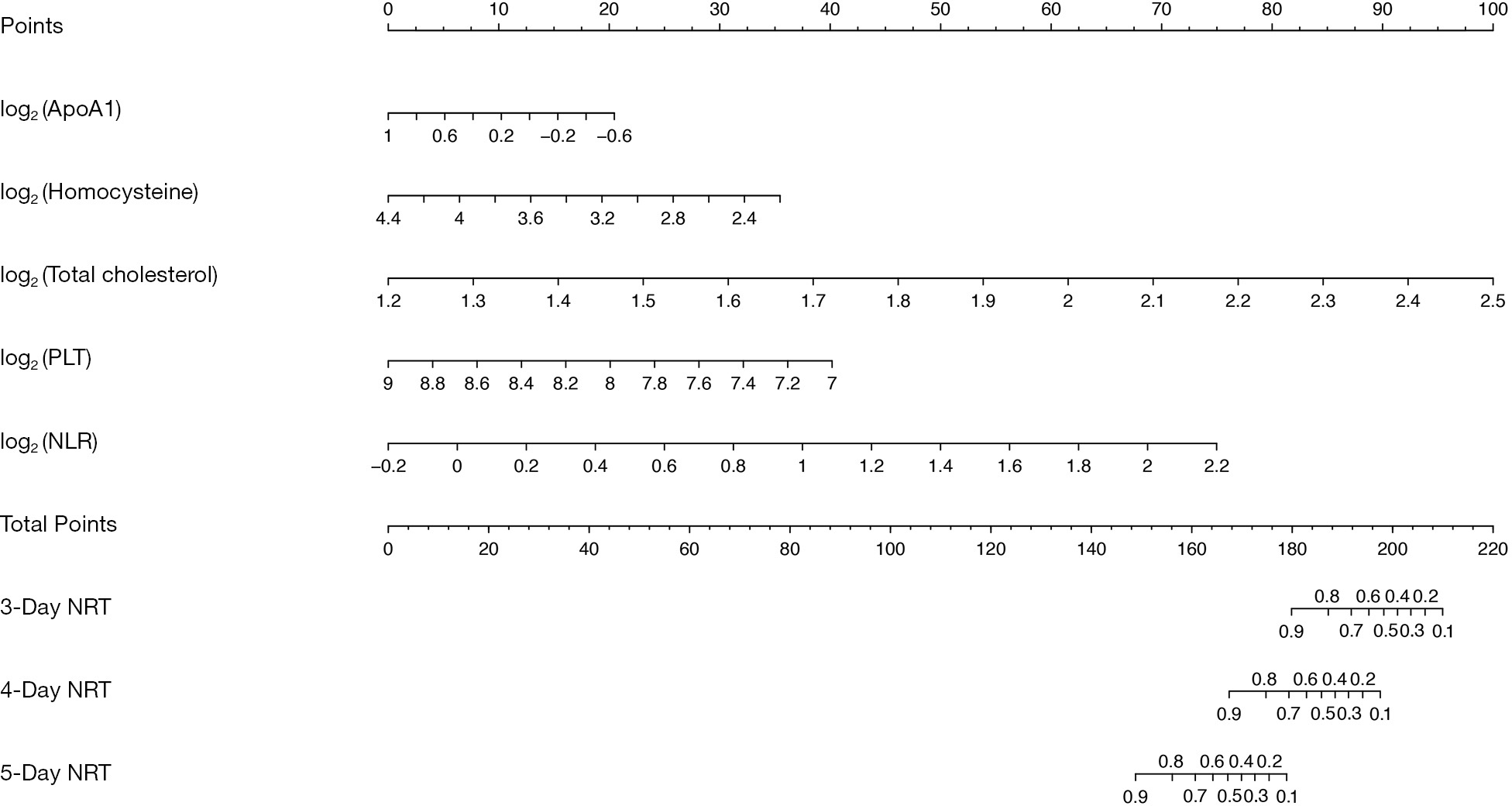 Figure 4 Nomogram based on the logarithm of 5 parameters predicting the probability of NRT after adrenalectomy.

Prognostic performance of the developed nomogram 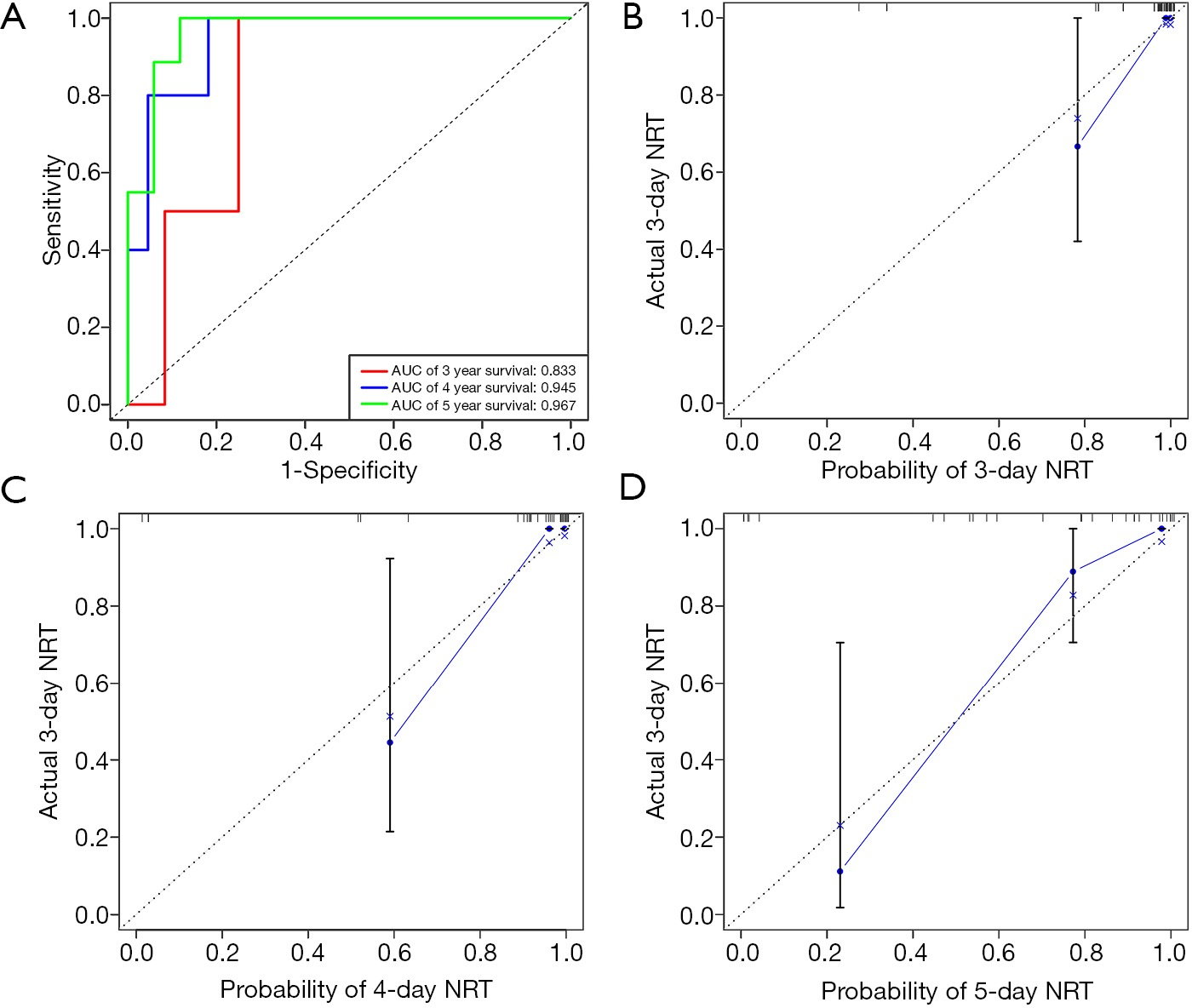 Although autonomous and uncontrolled cortisol secretion without pituitary feedback occurs in SCS, certain signs or symptoms related to hypercortisolism such as weight gain, skin atrophy, and increased facial fullness are lacking. Nonetheless, arterial hypertension, obesity, and impaired glucose tolerance/DM are more frequently observed in patients with SCS compared to the general population (29). Current treatment options for SCS include surgery or conservative treatment. The former is considered when the tumor size is >2 cm or when there is hypertension or insulin resistance/impaired glucose tolerance/DM. Laparoscopic surgery is relatively safe and reliable. All patients with SCS in this study underwent laparoscopic adrenalectomy and there were no perioperative deaths or complications or postoperative laparotomy. This is consistent with other reports that laparoscopic adrenalectomy has relatively low incidences of morbidity and mortality (0% mortality, 6.3% morbidity, and conversion to laparotomy in 4.7% of cases) (34). The safety and reliability of laparoscopic adrenalectomy have been confirmed in other studies (35-37). Plasma ACTH, urinary free cortisol, and post-dexamethasone cortisol suppressibility in patients who underwent this procedure were normalized within 1 year along with DM in 62.5% (5/8, P=0.619), hypertension in 67% (12/18, P=0.046), and hyperlipidemia in 37.5% (3/8, P=0.619) of patients, as evidenced by symptom relief or a reduction in drug dose. In contrast, patients who received conservative treatment showed no symptom improvement and in some cases even required a dosage increase (34). Other studies reported similar findings (29,38-42), suggesting that patients with SCS receive more benefit from surgery (improved hypertension, DM, and hyperlipidemia as well as weight loss) than from a conservative treatment approach.

Postoperative AI can be fatal if not treated in a timely manner (27,43,44). It remains unclear whether patients with SCS who undergo adrenalectomy require RT. Overtreatment with steroids can lead to severe infections or iatrogenic CS and suppress the HPA axis, thereby delaying its postoperative recovery (28,45-47). To avoid this risk, we developed a model based on a combination of 5 preoperative clinical parameters to identify patients at risk of postoperative AI who may require RT. The model—which includes ApoA1, NLR, total cholesterol, platelet count, and homocysteine—showed good prognostic performance, with AUC values ranging from 0.833 to 0.967 for 3- to 5-day NRT. The risk score based on the 5 parameters was used to divide patients into low- and high-risk groups; the latter were more likely to require RT, and should thus be closely monitored following surgery. Limitations of our study included the small sample size and the fact that steroid profile was not included in the model because of a lack of clinical data, except for plasma cortisol level at 08:00. Therefore, additional studies are needed to confirm the reliability of the nomogram and validate our conclusions.

We developed a nomogram based on 5 parameters (ApoA1, NLR, total cholesterol, platelet count, and homocysteine) that can help to identify CSC patients who are at risk for postoperative AI and would benefit from RT. The model showed good prognostic performance and is thus a useful clinical tool that can improve the outcome of CSC patients undergoing laparoscopic adrenalectomy.

Reporting Checklist: The authors have completed the TRIPOD reporting checklist. Available at http://dx.doi.org/10.21037/tau-20-1108

Conflicts of Interest: All authors have completed the ICMJE uniform disclosure form (available at http://dx.doi.org/10.21037/tau-20-1108). The authors have no other conflicts of interest to declare.

Ethical Statement: The authors are accountable for all aspects of the work in ensuring that questions related to the accuracy or integrity of any part of the work are appropriately investigated and resolved. The study has conformed to the provisions of the Declaration of Helsinki (as revised in 2013) and been approved by Ethics Committee of Zhongshan Hospital affiliated to Fudan University in China (No.2010-70), because of the retrospective nature of the research, the requirement for informed consent was waived.