In 2020, it is estimated that about 9610 new cases with testicular tumors will occur in the United States (1). Germ cell tumors (GCT) occupy 95% of testicular tumors, which can be divided into two histologic categories: seminoma and non-seminoma (2). Choriocarcinoma (CC) is one of the subtypes of non-seminoma, which only accounts for 7% to 8% of testicular tumors (3). Although the incidence is not high, it is the most common solid tumor in men between 20 to 39 years old, and the median age of patients suffering from testicular choriocarcinoma is only 29 years old (4). Moreover, unlike other GCT, it’s very aggressive and spread widely via hematogenous route, consequently with poor prognosis. In aspect of therapy, the primary treatment is radical inguinal orchiectomy, other various therapeutic regimens including retroperitoneal lymph node dissection (RPLND), chemotherapy and surveillance are applied according to patient’s pathological report, disease histology, stage and risk classification (5,6).

Due to the scarcity of cases and the complexity of the disease, the clinical features and prognostic factors of testicular choriocarcinoma are still not well characterized. Thus, we searched the Surveillance, Epidemiology, and End Results (SEER) database and summarized clinicopathological characteristics and survival outcomes for testicular choriocarcinoma in this study. Because seminoma is the most common malignant tumor among testicular tumors, we set it as a control group to show the clinical features of choriocarcinoma.

We present the following article in accordance with the STROBE reporting checklist (available at http://dx.doi.org/10.21037/tau-20-1061).

The patients who diagnosed as testicular choriocarcinoma and seminoma from 1998 to 2016 based on the third edition of the International Classification of Diseases for Oncology (ICD-O-3) were included in this study. Histology codes for each disorder were following: 9100/3 (Choriocarcinoma), 9101/3 (Choriocarcinoma combined with other germ cell elements) and 9061/3 (Seminoma). In the SEER database, Surgery therapy of testicular malignancies include local or partial excision of testicle, excision of testicle with or without cord and radical orchiectomy.

There are three main principals to filter the cases. Firstly, patients included in our study not only need be confirmed their malignant status by histology, but also their primary tumor limited to one site. Secondly, the cases lack of detailed follow-up information and cause of death were ruled out. Last but not the least, as radiotherapy is not recommended for patients with non-seminoma, in order to prevent selection bias, patients underwent radiation treatment were excluded from the cohort. Detailed screening process were shown in the flow diagram of Figure 1. 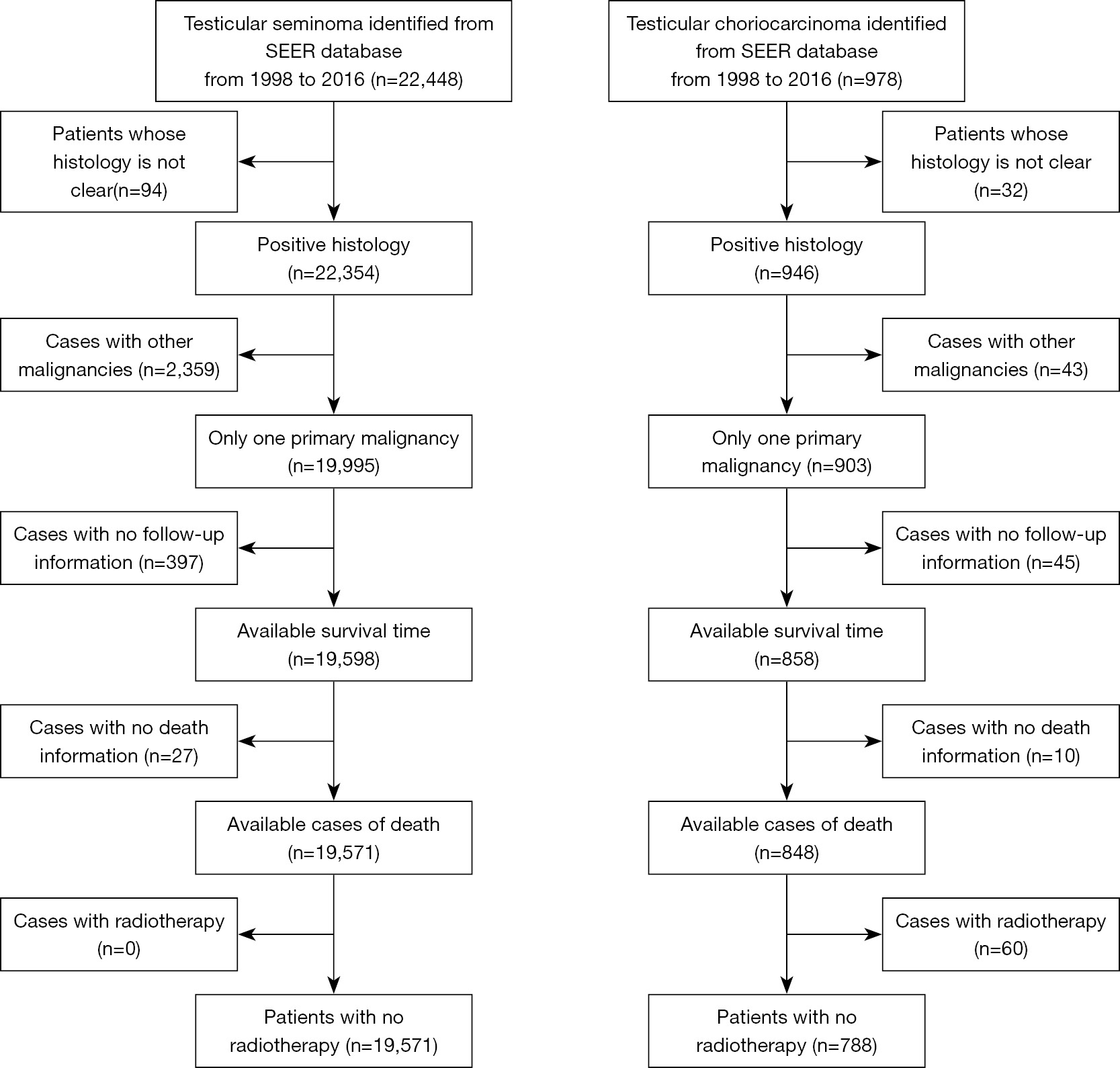 The study was conducted in accordance with the Declaration of Helsinki (as revised in 2013). Because the original data came from the SEER database, the study didn’t need to approved by ethics board of institution and the participants didn’t need to give informed consent before taking part.

The following SEER variables were selected for our study: age, marital status, laterality, tumor size, SEER stage, therapeutic methods (including: surgery and chemotherapy). Age was divided into two groups: ≤30 and >30 years; tumor size was categorized into two groups: ≤4 and >4 cm; SEER stages were classified into three groups by combination of the most precise clinical and pathological documentation recorded in the SEER program, which were localized, regional and distant. Localized meant “within organ”, regional defined by “extension to adjacent organs or to regional lymph nodes” and distant determined by “direct extension or metastasis”. Surgery was classified into “Yes”, “No” and “Unknown”. Chemotherapy was classified into “No/Unknown” and “Yes”. The primary survival outcomes were overall survival (OS) which calculated from diagnosis to any cause of death and cancer-specific survival (CSS) which calculated from diagnosis to death caused by testis carcinoma.

All the data were analyzed by R language (v4.0.0) software, and the elementary packages were “gmodels”, “nonrandom”, “survival” and “survminer”. Clinicopathological characteristics for testicular choriocarcinoma and seminoma were analyzed by using Chi-squared test or Fisher’s exact test. Propensity score matching was applied to process the analysis with a 1:2 ratio of choriocarcinoma to seminoma, for balancing the confounding bias in the study. Kaplan-Meier survival curves were used to show median survival time, and log-rank tests were used to determine the significance. The univariable and multivariable Cox proportional hazards models were used to assess the impact of related risk factors on OS and CSS. Two-sided tests were used and P<0.05 was deemed as statistically significant. 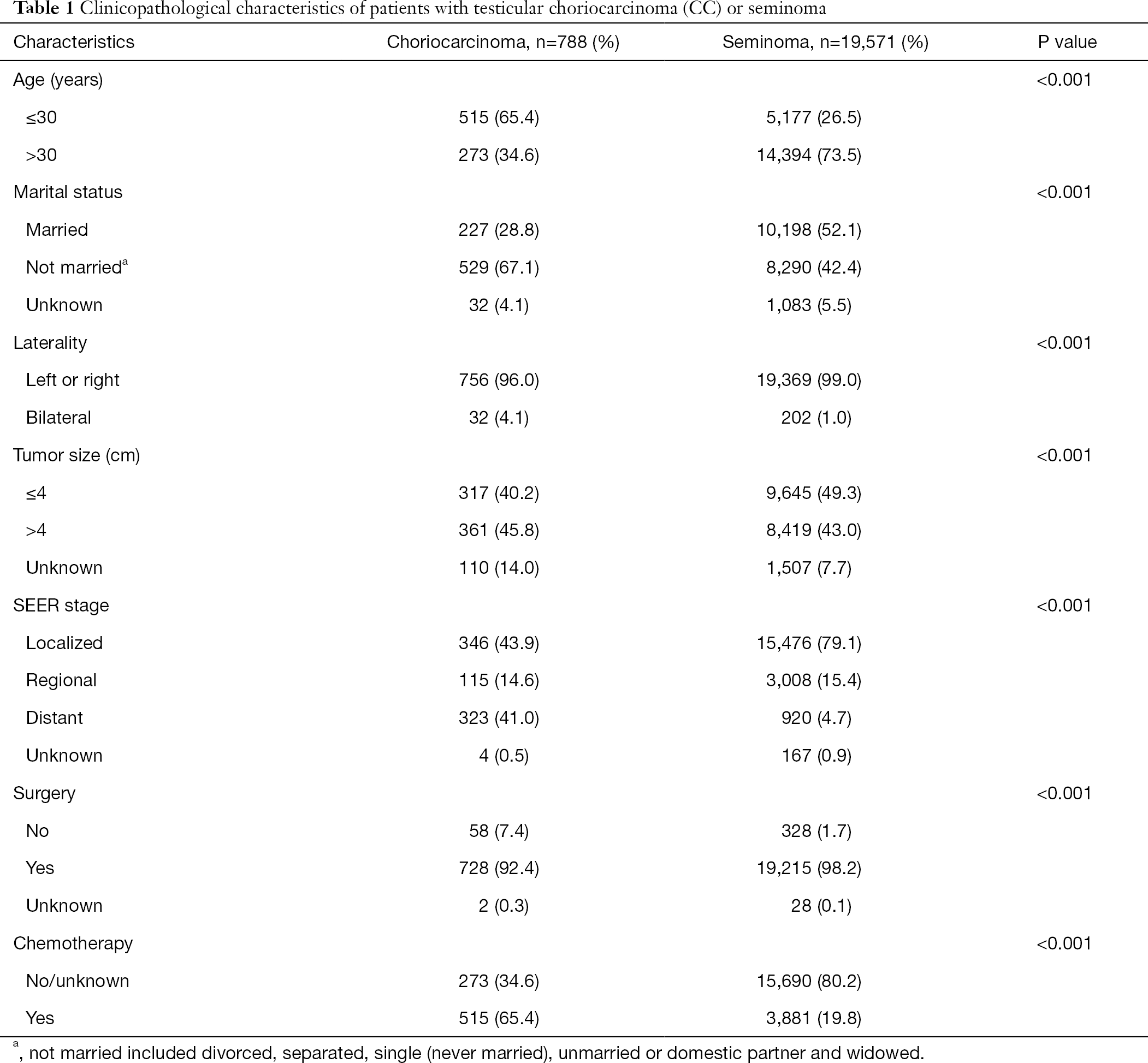 Due to the imbalance of variables between two groups, selection bias and confounding variables probably affected the results in the end. Consequently, in order to bring the result close to the effects of randomized controlled studies, we applied propensity score matching (PSM) to balance the confounding bias in the study. After PSM, no significant differences were found between two groups (Table S1). 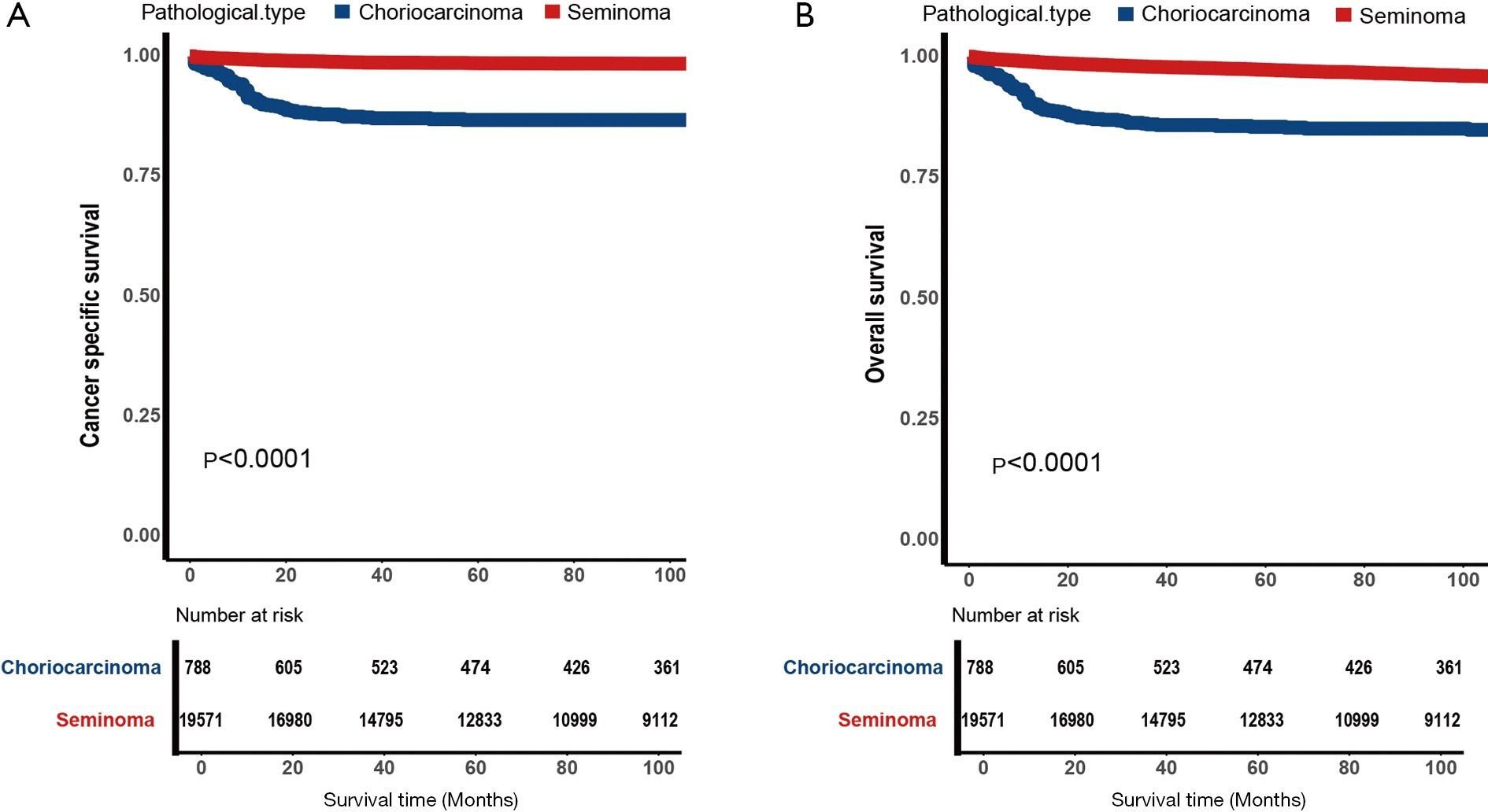 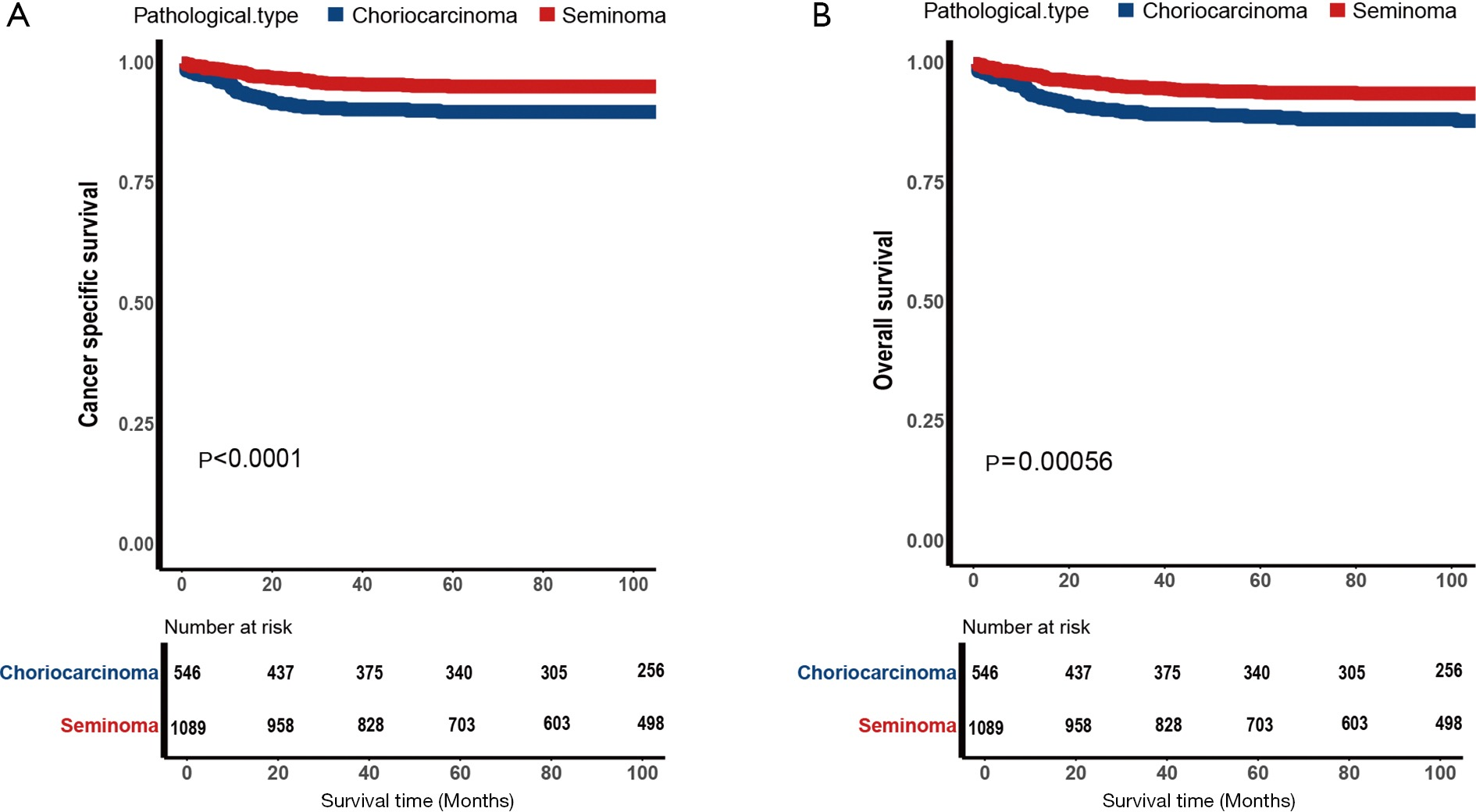 Prognostic factors for OS and CSS in testicular choriocarcinoma patients 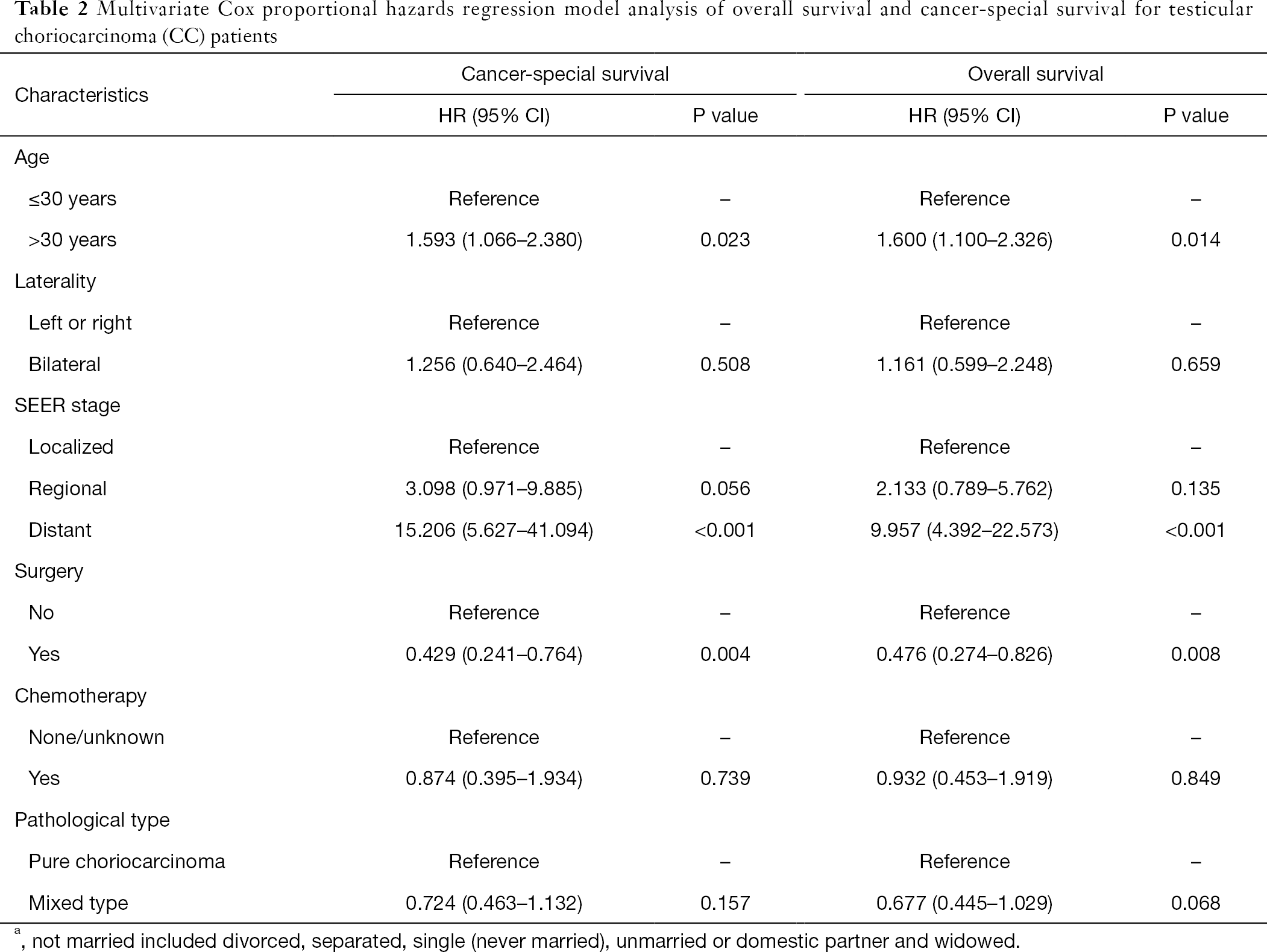 Although testicular cancer is uncommon which only accounts for less than 1% of all male tumors (7), the incidence of testicular cancer has been rising in the past 20 years (8). As a part of GCT, choriocarcinoma is a rare pathological type, whose pure form only accounts for approximately 0.5% of all testis tumors (9). Due to scarcity of cases, most of articles about it are case reports, hence, the clinicopathological features of the disease have not been well summarized so far. We collected 788 patients with choriocarcinoma and 19,571 patients with seminoma by searching SEER database. In our study, the patients in the choriocarcinoma group were younger, the ratio of bilateral tumors was higher, the size of tumors was larger, the SEER stage was more advanced, the ratio of receiving surgery was lower, the ratio of accepting chemotherapy was higher. Alvarado-Cabrero et al. published a series study on pure CC and predominant CC in GCT of the testis, 15 patients were included (10) with median age of 29 years old, the mean size of tumor was 6.5 cm, all of them presented with unilateral tumors and metastasized to distant sites. The age, SEER stage and tumor size were similar to our study, these features are indicators for worse prognosis of choriocarcinoma. The difference in laterality might be caused by limited sample size in Isabel’s study.

In our results, Distant metastasis accounted for 41.0% in all patients. High metastasis rate is a major feature of CC. The ability of invading to host vessels make CC an aggressive cancer which lead to a poor prognosis. Malek et al. suggested that chromosomal anomalies such as gaining or losing part of chromosome, e.g., i (12p) (11) might be the cause of early invasion of the tumor. Moreover, several studies indicated that vasculogenic mimicry, epithelial-to-mesenchymal transition and G protein-coupled receptor 1 expression may also contribute to the character of early vessel invasion (12,13).

In the survival outcomes, we found that 5-year rate of CSS were 86.8% in CC and 5-year rate of OS in CC were 85.5%, which were worse than that of seminoma patients. Stang et al. have done a research on different types of GCT in testis, and reported that 5-year relative survival for seminoma was close to 97.6%, non-seminoma was 93.3%, choriocarcinoma was the lowest, about 80.1% (14). Their study also validated the fact that the prognosis of CC is worse than that of seminoma. In addition, the results of our multivariable cox proportional hazards model suggested that age ≥30 and SEER stage in distant were adverse predictors for OS and CSS. Surgery was positive predictor for OS and CSS. Jiang et al. revealed that patients with 34 years old and younger had significantly longer OS (15). Stephenson et al. reported that by excluding clinical stage IIb non-seminoma patients from testicular tumor, the 4-year progression-free survival rate improved from 83% to 96%(16). which in agreement with our results that patients in younger age and localized tumor stage have better prognosis. Based on symptoms, physical examinations, imaging examinations on testes and serum tumor markers, all suspicious patients are recommended to have radical inguinal orchiectomy or inguinal exploration (2). Liu et al. analyzed various factors for prognosis in non-gestational ovarian choriocarcinoma patients and found that ovariectomy is a good prognostic factor for OS (17). Once choriocarcinoma is confirmed, subsequent treatment regimens such as: retroperitoneal lymph node dissection (RPLND), chemotherapy and surveillance are employed individually or in combination according to TMN stage, S stage and clinical risk factors. Mazzone et al. compared RPLND to no RPLND after primary treatment of stage I non-seminoma of testis, found that RPLND was associated with lower cancer-specific mortality (18). In our study, surgery is also regarded as a positive factor for patients’ prognosis. However, with the limitation of SEER database, not only RPLND wasn’t included in the surgery therapy, but also lack of specific analysis on different surgical methods (e.g., local or partial excision of testicle, excision of testicle with or without cord and radical orchiectomy). Consequently, more concrete studies are needed to verify our conclusion.

Although chemotherapy was not associated with better CSS and OS in our study, we still consider chemotherapy is beneficial for patient’s survival time. Tandstad et al. conducted a multicenter study on 745 patients with clinical stage I non-seminoma and showed that 41.7% of vascular invasion patients relapsed in surveillance group, but only 3.2% of vascular invasion patients relapsed in BEP chemotherapy group (19) over period of time. Oliver et al. studied survival events after adjuvant chemotherapy for Stage I non-seminoma and found that the recurrence rate of high-risk patients who accepted adjuvant treatment decreased by 24%, however, those who accepted active surveillance their recurrence rate declined only by 11% (20). Both of them demonstrated that chemotherapy is indispensable in the localized CC patients. In addition, Stephenson et al. found that with increasing patients received chemotherapy over time, their relapse-free survival were significantly improved from 84% to 98% for clinical stage IIA and IIB nonseminomatous germ cell testicular cancer (21).

NCCN guideline recommends radiotherapy to seminoma at stage Ia–IIb, but to non-seminoma, no specific instruction is stated on this regard. Feldman et al. have done a research on brain metastases from GCT and found out that patients with radiotherapy couldn’t change the course of tumor development (22). Doyle et al. studied the effect of whole brain radiation treatment on GCT patients and found that RT was not innocuous and could cause severe CNS toxicity (23). But no agreements were reached on this matter in the field. Casey et al. reported that patients suffered from non-seminomatous germ cell tumor (NSGCT) brain metastasis had a longer 4-year OS after radiotherapy (24). Further studies evaluating radiation therapy on NSGCT is in great need to clarify its efficacy.

There are several limitations in the study. First of all, there are selective bias and other confounding factors in a retrospective study. Next, data of chemotherapy coming from SEER database have inevitable bias. Last but not the least, comparison of efficacy between different treatment regimens may be affected by other supplementary therapeutic method applied in the process.

Choriocarcinoma is exceedingly rare disease with metastases at initial diagnose and has poor survival even after treatment. Old age and advanced tumor stage indicate a poor prognosis, while surgery therapy can improve prognosis. Nevertheless, longer-term studies with larger population of patients are needed to verify their biological behavior and therapeutic efficacy.

We sincerely thank You’e He for revising the language of this article.

Reporting Checklist: The authors have completed the STROBE reporting checklist. Available at http://dx.doi.org/10.21037/tau-20-1061

Conflicts of Interest: All authors have completed the ICMJE uniform disclosure form (available at http://dx.doi.org/10.21037/tau-20-1061). XZ serves as an unpaid editorial board member of Translational Andrology and Urology from Mar 2019 to Feb 2021. The other authors have no conflicts of interest to declare.

Ethical Statement: The authors are accountable for all aspects of the work in ensuring that questions related to the accuracy or integrity of any part of the work are appropriately investigated and resolved. The study was conducted in accordance with the Declaration of Helsinki (as revised in 2013). Because the original data came from the SEER database, the study didn’t need to approved by ethics board of institution and the participants didn’t need to give informed consent before taking part.