Bladder cancer (BCa) is a prevailing, invasive, malignant tumor in the urinary system (1). In 2019, there were 80,470 bladder cancer, with 17,670 deaths, occurred in America (2). Radical cystectomy (RC) is regard as the standard surgery of muscle-invasive bladder cancer (3). With the development of neoadjuvant chemotherapy (NAC), NAC combined with RC have been increasingly proved effective in BCa, which can improve patients’ survival and quality of life. However, most patients will still relapse and develop metastasis (4). In addition, bladder cancer patients need to monitor tumor recurrence throughout their lives, and full-course treatment of locally advanced bladder cancer (LABC) is so expensive that few patients could afford (5).

Current NAC and radical cystectomy (RC) are recommended by U.S. guidelines as the treatment of choice for LABC (6). NAC can reduce the stage of invasive bladder cancer and improve overall survival (OS) before RC (7). However, for patients with LABC (pT3–T4 or pN+, there is little existing evidence to guide treatment (8). Matthew D. Galsky (9) conducted a study involving 5,396 patients with LABC and concluded that there is a significant improvement in overall survival (HR 0.70; 95% CI: 0.64 to 0.76) for those who had adjuvant chemotherapy(AC) after RC. However, the current research on the efficacy of AC after NAC and RC is controversial. Some clinical studies suggest that the use of AC can prolong the survival of patients who received NAC and RC, but some researchers believed that using adjuvant chemotherapy is not beneficial to prognosis (7,8,10-13).

Here, a pooled-analysis was systematically performed to explore whether the prognosis of patients receiving AC after NAC and RC significantly improved.

This research was finished in accordance with the Preferred Reporting Items for Systematic Review and Meta-analyses (PRISMA) reporting checklist (available at http://dx.doi.org/10.21037/tau-20-571) (14). Because of the nature of the study design, no ethical standards approval or informed consent was required.

A comprehensive review of the literatures was performed in accordance with the PRISMA statement in January 2020 in PubMed (ncbi.nlm.nih.gov/pubmed), Embase (embase.com), and the Cochrane Central Search Library (cochranelibrary.com). We used following Search terms to search literature: "Neoadjuvant Therapy"[Mesh] OR (neoadjuvant chemotherapy OR Preoperative Chemotherapy)) AND (neoplasms OR cancer OR carcinoma) AND ("Urinary Bladder Neoplasms"[Mesh] OR (bladder OR urinary bladder)) AND ("Cystectomy"[Mesh] OR Radical Cystectomy) AND ("Chemotherapy, Adjuvant"[Mesh] OR Adjuvant Chemotherapy). We reviewed all abstracts and review studies about this topic and identified manually the references of original studies.

Two independent researchers (ZYC and JH) extracted the data of eligible studies. Argument was solved by discussing with a third researcher (HJ). We extracted individually the data from the literature and demographics. The following information were contained: author, ethnicity, area of study, study type, publication year, tumor stage, sample size, age, survival analysis, exposure or intervention definition, adjusted variables, Newcastle-Ottawa Scale (NOS) score, duration and median follow-up. An HR with a 95% CI was used to assess the association between adjuvant chemotherapy use and OS, CSS, and RFS after neoadjuvant chemotherapy and radical cystectomy. If the HRs, their 95% CIs and P values were available, they were obtained from the original articles. If not, we computed the HRs and 95% CIs according to the methods (15).

We took the HRs and 95% CIs together to survey the effect of using AC after NAC and radical cystectomy for outcomes. The HRs and 95% CIs directly were collected in the article if they were available. To avoid calculation errors, two independent researchers completed this process. We tested Statistical heterogeneity in studies by a formal Q-statistic and the chi-squared (I2) test. The degree of heterogeneity was investigated through the value of I2 (no heterogeneity: I2 <25%; moderate heterogeneity: I2 =25–50%; substantial heterogeneity: I2 >50%). The random-effects model was utilized when we found substantial heterogeneity. When we found moderate or no heterogeneity, the fixed-effects model was utilized. The level of statistical significance was set at 0.05 (16).We could not assess publication bias (17,18) because the amount of the included studies is small, so to appraise the stability of the pooled-analysis results, a sensitivity analysis was done using the leave-one-out cross validation. Review Manager (RevMan) v5.3 was used to perform this meta-analysis.

Eventually, we got 607 records through databases. Our present meta-analysis included six studies (7,8,10-13) in accordance with the inclusion and exclusion criteria, which completely investigated the effects of using AC after neoadjuvant chemotherapy and RC and their outcomes (Figure 1). Especially, data were available from four researches on the effects of using adjuvant chemotherapy on the OS of patients with LABC, three studies about RFS, and two studies about CSS. Three thousand ninety-six patients with pT3/T4 and/or pN+ were included; 76% (n=2,355) of them were in the exposure group and 24% (n=741) were in the control group. We summarized the main characteristics of the qualified studies in Table 1. The results are summarized in Table 2. To assess the quality, the Newcastle-Ottawa Scale (NOS) scores (Table S1) of the including studies ranged from 7 to 8. 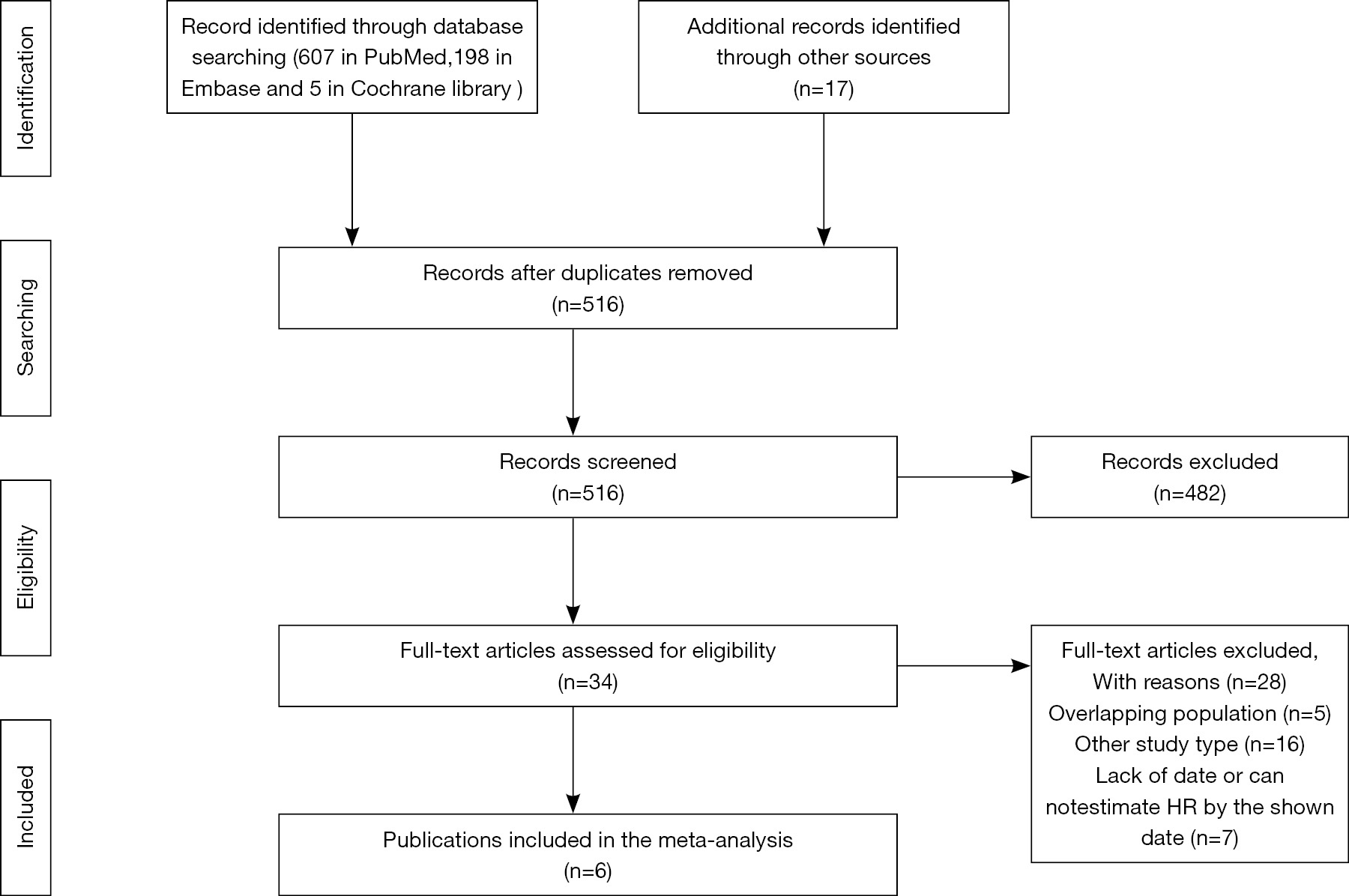 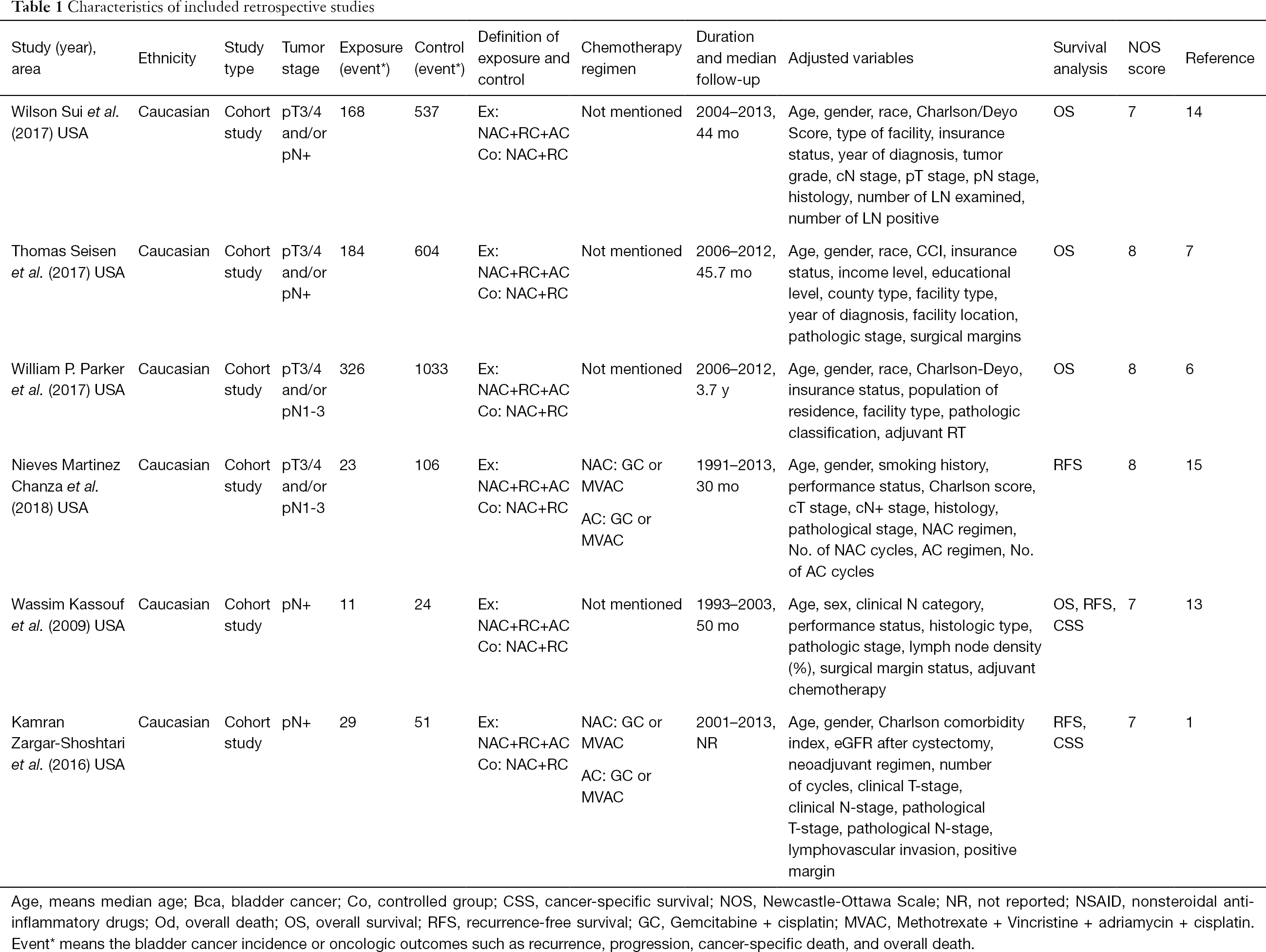 AC after neoadjuvant chemotherapy and RC improves OS for LABC

Adjuvant chemotherapy after NAC and RC improves CSS of LABC

Three studies recorded the effects of using AC after neoadjuvant chemotherapy and RC on the RFS of bladder cancer patients; 244 patients with pT3/T4 and/or pN+ were included {NAC+RC [181] vs. NAC+RC+AC [63]}. A random-effects model was utilized in the analysis because a substantial heterogeneity between the trials was found (I2 =53%; P=0.12). Mainly, we found no significant relationship between the use of adjuvant chemotherapy after NAC and RC and the RFS of patients with LABC (HR =0.52, 95% CI: 0.27–1.01; P=0.05) (Figure 4).

Sensitivity analysis and quality of studies

We performed a sensitivity analysis to evaluate the stability of the pooled-analysis results. Because the overall HR did not change significantly after removing the studies related to heterogeneity, the pooled-analysis was convincing and adequately stable (Figure 5). Two independent researchers assessed the quality of these studies through the NOS (Newcastle-Ottawa Scale) (16). High-quality studies: scores of 7 to 9; low-quality study: score of <7. 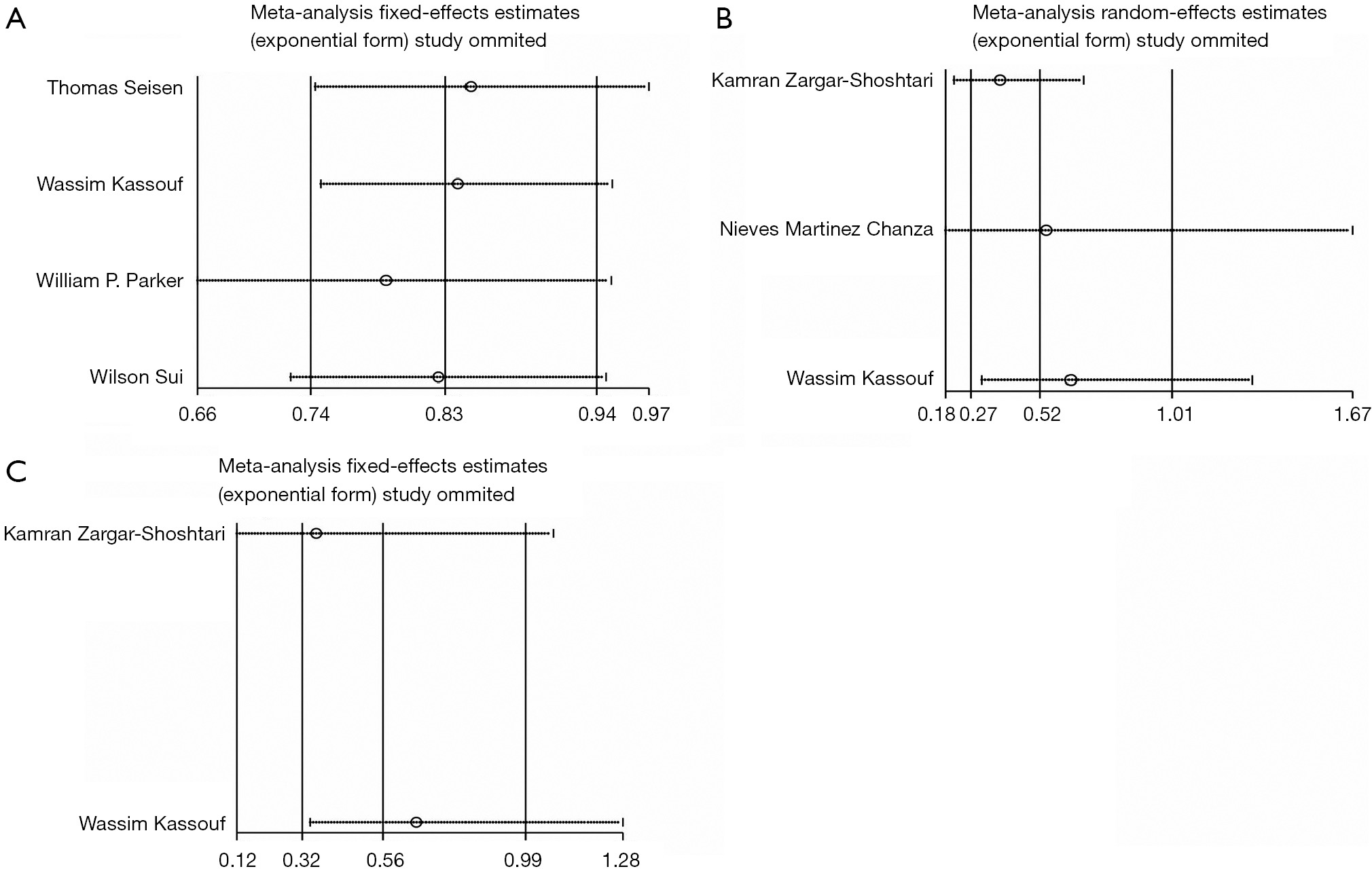 Six retrospective cohort studies investigated the effects of using additional adjuvant chemotherapy after NAC and RC on the OS, RFS, and CSS of LABC. In the study by Wilson Sui (13), the AC group had a longer median OS compared with the observation group (23 vs. 20 months), but the result was not statistically significant, and AC was not related to the risk of death in a multivariate analysis. This conclusion was also supported by W.P. Parker (8) and W. Kassouf (10) Conversely, Seison (12) reported that the AC group had a significantly longer OS than the observation group. There was also a disagreement about the CSS of the AC group between K. Zargar-Shoshtari (7), who concluded that AC was not associated with obvious improvement in CSS, and W. Kassouf (10), whose study presented a positive result, proposing that LABC patients receiving AC after NAC and RC could realize an improved CSS. W. Kassouf (10) and N. Martinez Chanza (11) supported the view that AC could improve the RFS of the patients, and K. Zargar-Shoshtari (7) reported that RFS which was not statistically significant appeared longer in the experimental group. The current pooled-analysis showed a significant association between using additional adjuvant chemotherapy after NAC and RC and the CSS and OS of patients with bladder carcinoma, but no effect on the RFS. Because the data provided by these six studies was not very comprehensive, larger prospective studies need to verify the outcomes.

Actually, this present study represents the first meta-analysis of an effectiveness evaluation of AC after neoadjuvant chemotherapy and RC. Indeed, 3096 patients were included in these six studies with pT3/T4 and/or pN+ disease after NAC and RC. 741 of them further used AC that was independently related to overall survival and CSS. The results concluded that using additional AC after neoadjuvant chemotherapy and RC could extend the OS and CSS of patients with pT3/T4 and/or pN+ BCa but added no obvious benefit to their RFS.

Node-positive bladder cancer was a type of LABC which means poor prognosis. As the limitation of pooled data, we could not conduct subgroup analysis on pN- or pN+ about OS or CSS for additional AC. Walz et al. considered that either MVAC or GC had no significant effect on CSS or OS after RC in high-risk patients which included positive node patients (28). However, Pak et al. argued that AC after RC was associated with improved OS in patients with node-positive bladder cancer (29). Consequently, the effect of additional AC on the node-positive patients is still unclear.

Furthermore, the results didn’t show whether all of LABC patients need to have an additional AC. However, there have been some studies indicated patients with different biomarkers had different sensitivity on chemotherapy. Woonyoung Choi et al. found that p53-like MIBCs were consistently resistant to neoadjuvant methotrexate, vinblastine, doxorubicin and cisplatin chemotherapy (31). Van Allen et al. found that Somatic ERCC2 mutations correlate with complete response to cisplatin-based chemosensitivity in MIBC (32). Consequently, we should stratify patients with different biomarkers.

Different from chemotherapy only era, with the rise of immunotherapy, more and more immunotherapy agents such as PD-1 blockade and PD-L1 blockade have been applied in therapy of LABC. Necchi et al. found that Median OS for those continuing atezolizumab (PD-L1 blockade) treatment after the previous platinum-based chemotherapy was 12.8 months, compared to 3.6 months for those not treated with atezolizumab (33). In another clinical trail—Keynote045, comparing pembrolizumab (blockade interaction between PD-1 and PD-L1) to chemotherapy after previously platinum-based chemotherapy. The median OS was 10.3 vs. 7.4 months (34). These studies showed that application of immunotherapy agents followed by NAC and RC probably have a better prognosis.

Some limitations also exist in our meta-analysis. First, the type of chemotherapy was not available, because these six studies used different chemotherapies. Some studies used platinum-based regimens, but some used carboplatin-based regimens, which probably resulted in different effects for patients. Second, although we confirmed the positive effects of using additional AC after neoadjuvant chemotherapy and RC for patients with pT3/T4 and/or pN+, we do not know whether using additional AC after neoadjuvant chemotherapy and RC could extend the OS or CSS of patients with pT0-2 bladder cancer, because these six studies selected only patients with pT3/T4 and/or pN+ cancer. Third, English is the only language of these qualified studies, so increased publication bias might be found in the exclusion of studies in other languages.

Our meta-analysis supported a favorable clinical role for additional AC for patients with LABC after neoadjuvant chemotherapy and RC. We found that using additional AC after neoadjuvant chemotherapy and RC could extend the OS and CSS of patients with LABC. Large, prospective, multicenter, randomized controlled trials are still essential to confirm the role of AC for LABC.

Reporting Checklist: The authors have completed the PRISMA reporting checklist. Available at http://dx.doi.org/10.21037/tau-20-571

Conflicts of Interest: All authors have completed the ICMJE uniform disclosure form (available at http://dx.doi.org/10.21037/tau-20-571). Dr. XZ serves as an unpaid editorial board member of Translational Andrology and Urology from Mar 2015 to Feb 2021. The other authors have no conflicts of interest to declare.