Renal cell carcinoma (RCC) accounts for approximately 90% of all renal tumors. Histologically, clear cell RCC (ccRCC) is the majority of RCC, accounting for 75–80% of total cases (1). Nowadays surgical treatment is still an effective measure option for early ccRCC, however the treatment of advanced and metastatic ccRCC remains challenging. What’s worse, more than 30% of ccRCC patients exhibit metastatic lesions at the time of initial diagnosis and the probability of metastases in the remaining patients is approximately 30% (2).

A cohort of 122 patients with RCC was admitted to the fifth affiliated hospital of Sun Yat-sen University from January 2018 to January 2020. Eligible patients were pathologically diagnosed as ccRCC, peripheral blood T lymphocyte subsets and computed tomography were underwent preoperatively. Finally, a total of 80 patients was enrolled into this study. All of the 80 ccRCC patients received neither neoadjuvant chemotherapy nor immunity therapy preoperatively, and no patients had any coexisting immune system disorders or known active infections before treatment. All procedures performed in this study were in accordance with the Declaration of Helsinki (as revised in 2013) and approved by the Ethics Committee of the Ethics Committee of the fifth affiliated hospital of Sun Yat-sen University (No.: 2020#L101-1). Because of the retrospective nature of the research, the requirement for informed consent was waived.

All patients were followed up every 3–6 months, with a range of 3–28 months and a mean follow-up of 13.3 months. Physical examination, routine blood test and chemistry analysis, chest radiography and abdominal ultrasonography or computed tomography were performed at each follow-up. The study endpoint was patient death. Overall survival (OS) was calculated as the time from the date of enrollment to death or the date of the last follow-up.

Distribution of T lymphocyte subsets in patients with ccRCC

Among the 80 patients with ccRCC, 51 (63.8%) patients were male and 29 (36.2%) patients were female, with a mean age of 54.9 years (range, 26–84 years). The distributions of clinicopathological characteristics in T lymphocyte subset group were shown in Table 1. 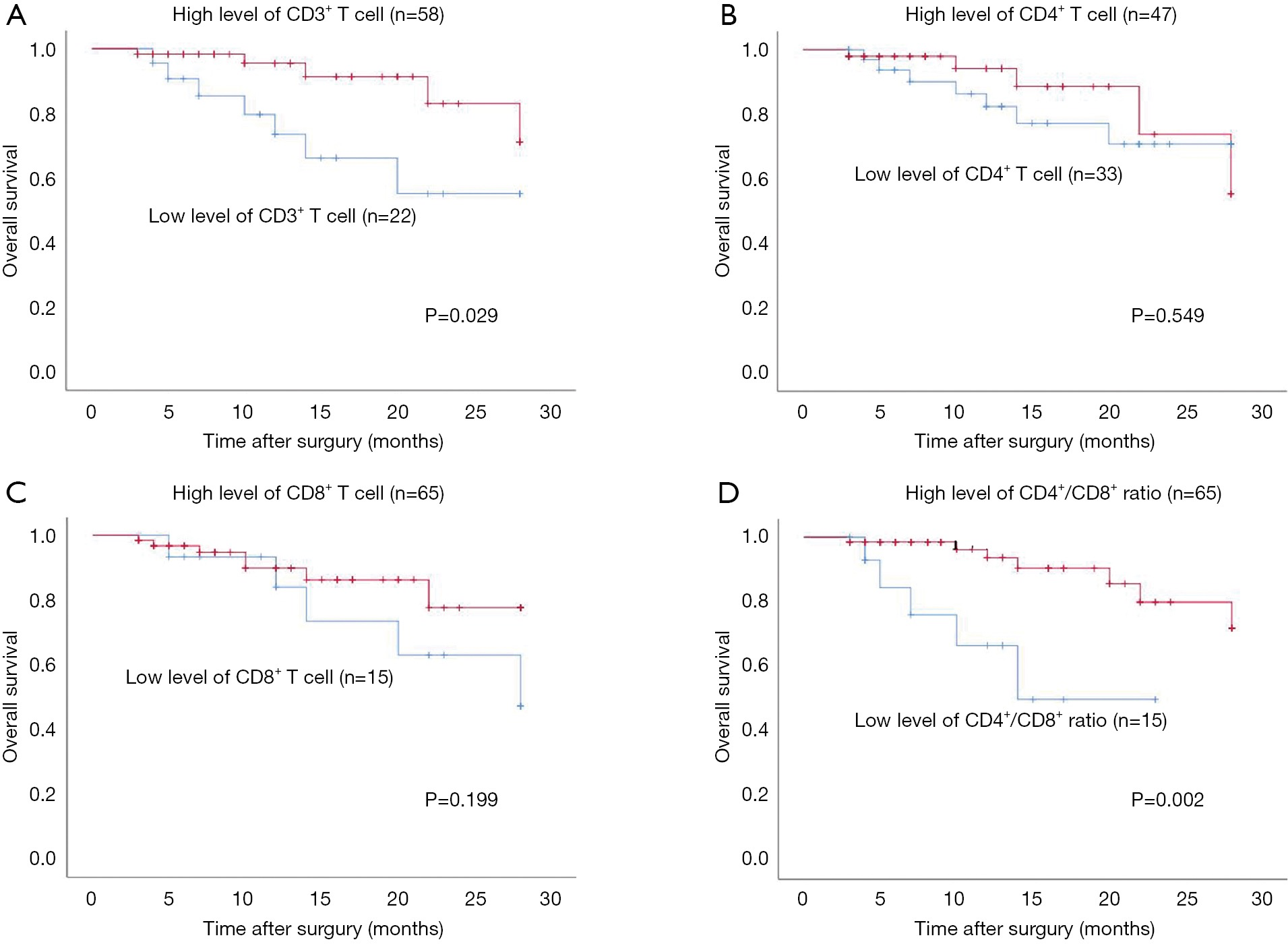 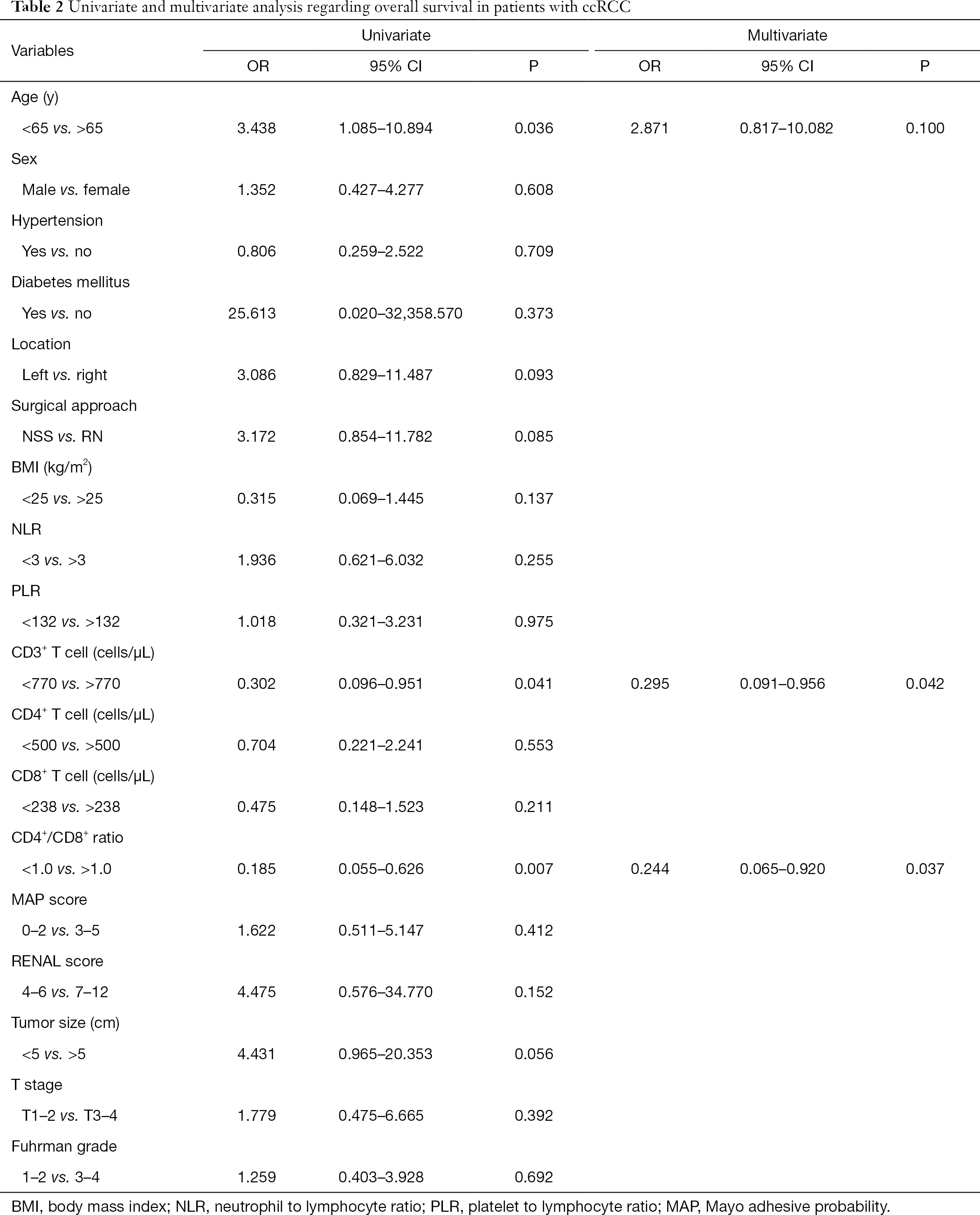 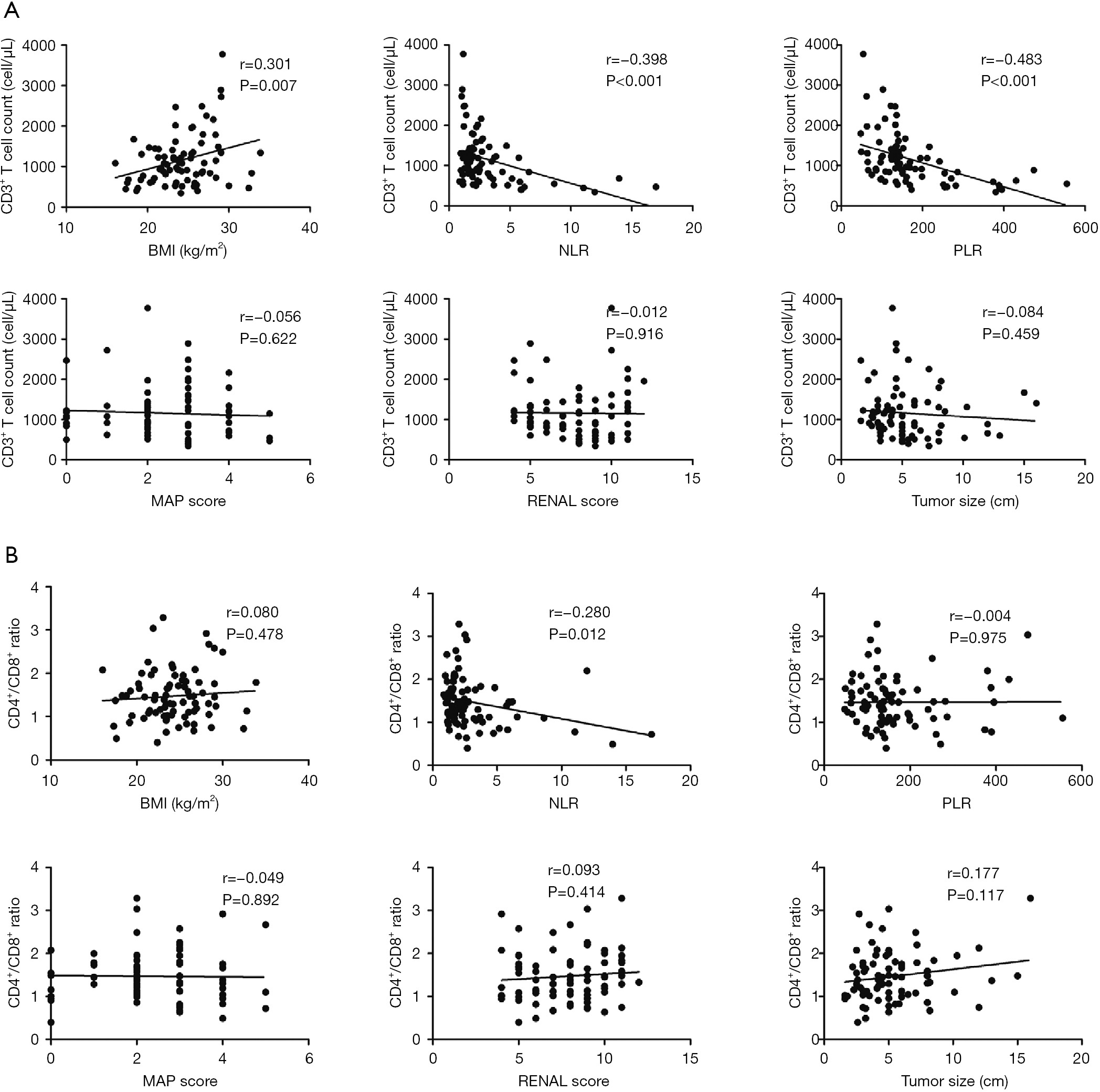 Prior studies have indicated that the prognostic and predictive value of T cells infiltrated in formalin-fixed and parrffin-embedded specimens in RCC (11,12). However, to the best of our knowledge, the present study is the first to identify the relationship between peripheral blood T lymphocyte subsets and the prognosis of patients with ccRCC. The current study shows that low CD3+ T cells and low CD4+/CD8+ ratio in peripheral blood were negatively associated with the OS in ccRCC patients.

One characteristic of most patients with malignant tumor is immune dysfunction, and inhibition of host immune system facilitates tumor progression. Increasing studies have demonstrated a prognostic and predictive role of systemic and local immunological markers in cancer patients (10,13). Clear cell renal cell carcinoma (ccRCC), representing the majority of RCC, is characterized by strong immunogenicity. As a result of it, immunotherapies targeting and blocking immune checkpoint, such as CTLA-4 and PD-1 are newly applied to patients with ccRCC during the last decade. CD3+ tissue infiltrating lymphocytes (TILs) forming memory T-cell and CD8+ TILs forming cytotoxic T-cell play a key role in immune defense (14). Local immune response in ccRCC, such as CD3+ and CD8+ TILs, has been analyzed in recent studies. It was reported that higher density of CD8+ TILs was associated with prolonged progression-free survival in ccRCC (15). In a cohort of 756 patients with ccRCC, the percentage of tumor-infiltrating CD3+ T cells in patients with better response to nivolumab was significantly increased (16). Moreover, lower T cell infiltrate significantly increased the recurrence of localized ccRCC following surgery (12).

Compared to local immunological markers by detecting tumor tissues, peripheral blood T lymphocyte subsets are indicators of systemic immune response and can be conveniently acquired. Changes of the peripheral blood T lymphocyte subsets response to various treatment and clinical outcomes are observed. For patients with various types of cancers after hyperthermia treatment, such as ovarian, gastric or endometrial cancer, the proportion of CD8+/CD28+ T cells was increased, while that of CD4+/CD25+/CD127+ cells was decreased (17). Excitingly, the prognostic role of the peripheral blood T lymphocyte subsets was also noted. The correlation between increased peripheral blood CD3+ and CD8+ T cells and improved survival was significantly positive in patients with pancreatic cancer after chemotherapy with 5FU (18). Similarly, for patient with small cell lung cancer, higher CD8+ T cells demonstrated better progression free survival (7).

NLR and PLR are widely used as inflammation-associated indexes. Recent studies have demonstrated their prognostic role in various types of cancers, including RCC (21,22). Moreover, higher NLR and PLR are associated with worse prognosis in immunotherapy for patients with RCC (23,24). High activity of inflammatory response is noted with elevated NLR and PLR, while chronic inflammation usually leads to tumor development by suppressing the immune system. Our data suggested that CD3+ T cells and CD4+/CD8+ ratio were correlated with NLR and PLR levels, which is consistent with the above studies (23,24).

The present study also has certain limitations. Firstly, our study was conducted in a single institution with a small sample size of 80 patients and a short-term follow-up of 3–28 months. To provide a better evidence, our results require larger samples and longer follow-up in a multi-center cohorts. Secondly, our study only focused on the T lymphocyte subsets in peripheral blood to reflect the immune status. Our results should combine the B lymphocyte cell and natural killer cell to monitor systemic immune function. Besides, TILs were not detected in our study. A better understanding of the correlation between peripheral blood T lymphocyte subsets and TILs will help to explain the prognostic role of T lymphocyte subsets in ccRCC patients.

Funding: This work was supported by the Fundamental Research Funds for the Central University (No. Sun Yat-sen University, 19ykpy49 to Y Zhou) and Wu Jieping medical foundation (No. 320.6752.1223 to Y Dai).

Reporting Checklist: The authors have completed the REMARK reporting checklist. Available at http://dx.doi.org/10.21037/tau-20-1066

Conflicts of Interest: All authors have completed the ICMJE uniform disclosure form (available at http://dx.doi.org/10.21037/tau-20-1066). The authors have no other conflicts of interest to declare.

Ethical Statement: The authors are accountable for all aspects of the work in ensuring that questions related to the accuracy or integrity of any part of the work are appropriately investigated and resolved. All procedures performed in this study were in accordance with the Declaration of Helsinki (as revised in 2013) and approved by the Ethics Committee of the Ethics Committee of the fifth affiliated hospital of Sun Yat-sen University (No.: 2020#L101-1). Because of the retrospective nature of the research, the requirement for informed consent was waived.