In the present study, we downloaded the expression profile datasets, GSE145467 and GSE108886, from the Gene Expression Omnibus (GEO) database. We then screened out common differentially expressed genes (DEGs) using combined GEO2R and VennDiagram package analyses. We performed Gene Ontology (GO) annotation and Kyoto Encyclopedia of Genes and Genomes (KEGG) pathway enrichment analyses of common DEGs. The protein–protein interaction (PPI) network was constructed by Cytoscape, and the hub genes were obtained using the Cytohubba plug-in of Cytoscape. In addition, potential micro RNAs (miRNAs) of hub genes were predicted by miRWalk 3.0. It is hoped the results of this study can provide insights into the molecular mechanism of NOA and identify potential biomarkers and therapeutic targets. We present our findings in accordance with the STROBE and MDAR reporting checklists (available at http://dx.doi.org/10.21037/tau-20-1029).

As all the data in this study were from the GEO public database (https://www.ncbi.nlm.nih.gov/geo/), the approval of the local ethics committee was not required.

The GEO2R tool (https://www.ncbi.nlm.nih.gov/geo/geo2r/) was used to screen DEGs in NOA tissues compared with matched OA tissues. The t-test and Benjamini–Hochberg method were used to calculate the P value and false discovery rate (FDR), respectively. The DEGs were screened out according to FDR <0.05 and |FC| ≥2.5. The common DEGs in the two datasets were screened out by the VennDiagram package.

GO functional and KEGG pathway enrichment analysis was conducted to determine the functions of common DEGs using the Database for Annotation Visualization and Integrated Discovery (DAVID; https://david.ncifcrf.gov/). The results of GO and KEGG pathway enrichment analyses were downloaded as a TXT file for subsequent analysis. The results were visualized using R software version 3.6.2. A P value <0.05 was set to represent a statistically significant difference.

The Search Tool for the Retrieval of Interacting Genes database (STRING; https://string-db.org/cgi/input.pl) is an online tool for analyzing the PPI information. We constructed a PPI network of common DEGs using the STRING based on a minimum required interaction score of 0.7. We then used Cytoscape software v3.7.1 (https://cytoscape.org/) to visualize the PPI network derived from the STRING database. Using the cytoHubba plugin in Cytoscape, the nodes in the PPI network were ranked according to the degree calculation method (12) with the top 20 genes being considered the hub genes. GO and KEGG pathway analyses for the hub genes were performed using the WebGestalt (http://www.webgestalt.org/). A P value <0.05 was considered a statistically significant difference.

Analysis of hub genes in the NOA subgroup

The NOA samples in the GSE108886 dataset were analyzed according to its two subgroups: the non-obstructive azoospermia with meiotic arrest (NOA-MA) subgroup contains five samples, and the non-obstructive azoospermia with pre-meiotic arrest (NOA-PreMA) subgroup contains three samples. The Wilcox test was used to determine whether there were differences in the expression of hub genes between the two subgroups. A P value <0.05 was considered statistically significant.

Validation of the hub genes

To further verify the differential expression of hub genes, we downloaded the GSE9210 dataset, which contains 47 NOA samples and 11 OA samples. The expression levels of genes in this dataset have been processed by lowess-normalized natural log [Cy5/Cy3] (13). The Wilcox test was used to compare the differential expression of hub genes between the NOA and OA samples in the GSE9210 dataset. A P value <0.05 was considered a statistically significant difference.

Twenty hub genes associated with NOA were imported into the miRWalk 3.0 software (http://mirwalk.umm.uni-heidelberg.de/) to screen for the miRNAs that regulate target genes. The miRWalk 3.0 software integrated the prediction results of TargetScan, and a score >0.8 was used as the cutoff criterion. Following this, a miRNA-gene regulatory network was constructed and visualized by Cytoscape. Moreover, miRNAs which targeted more than two genes were selected.

We performed R software version 3.6.2 for statistical analysis. The Wilcox test was used to compare the two groups. A P value <0.05 was considered a statistically significant difference.

Identification of DEGs in NOA 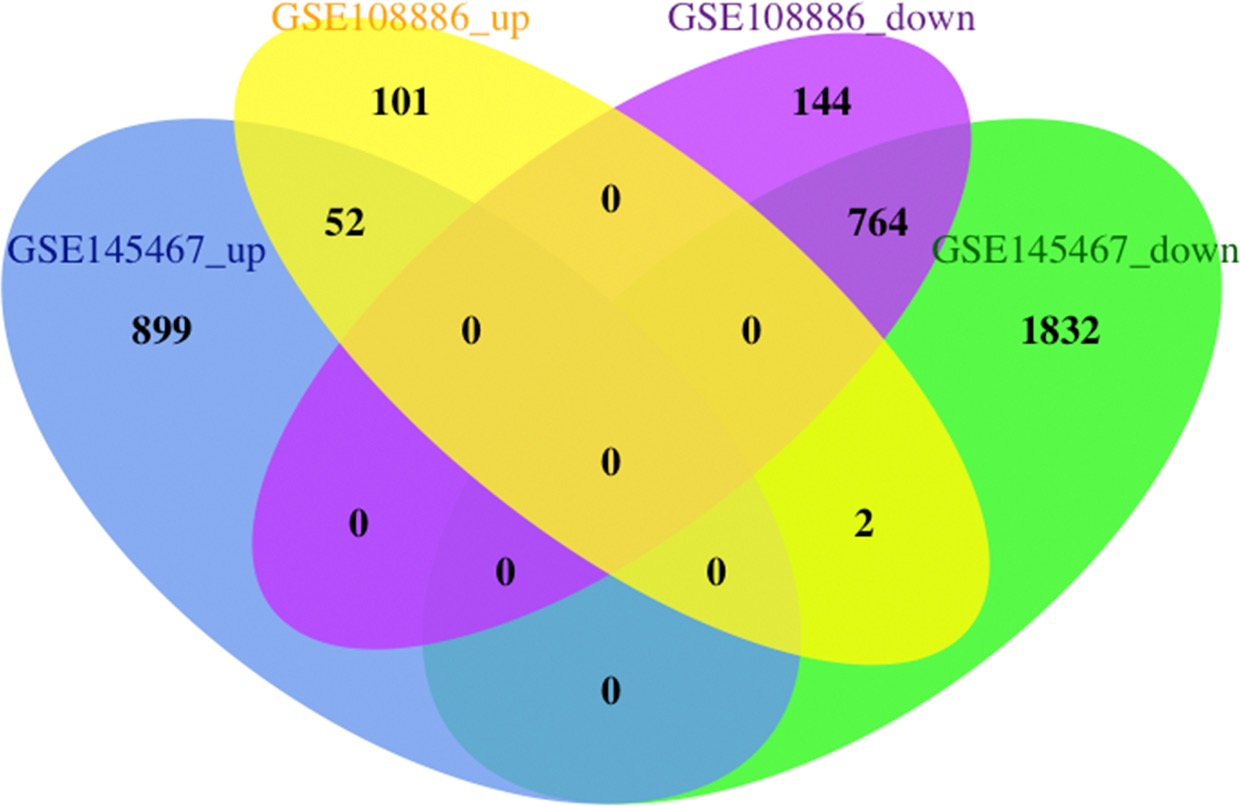 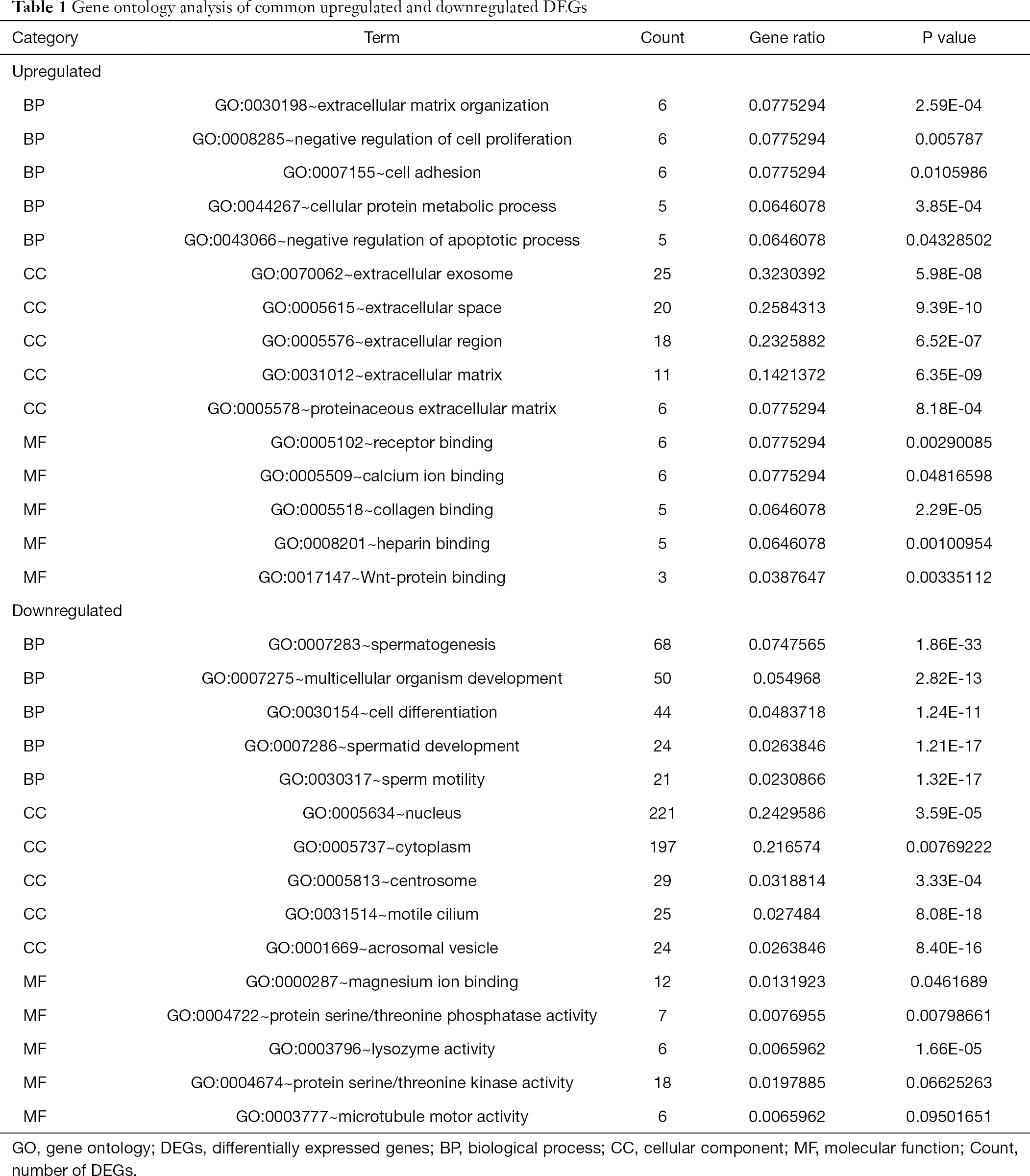 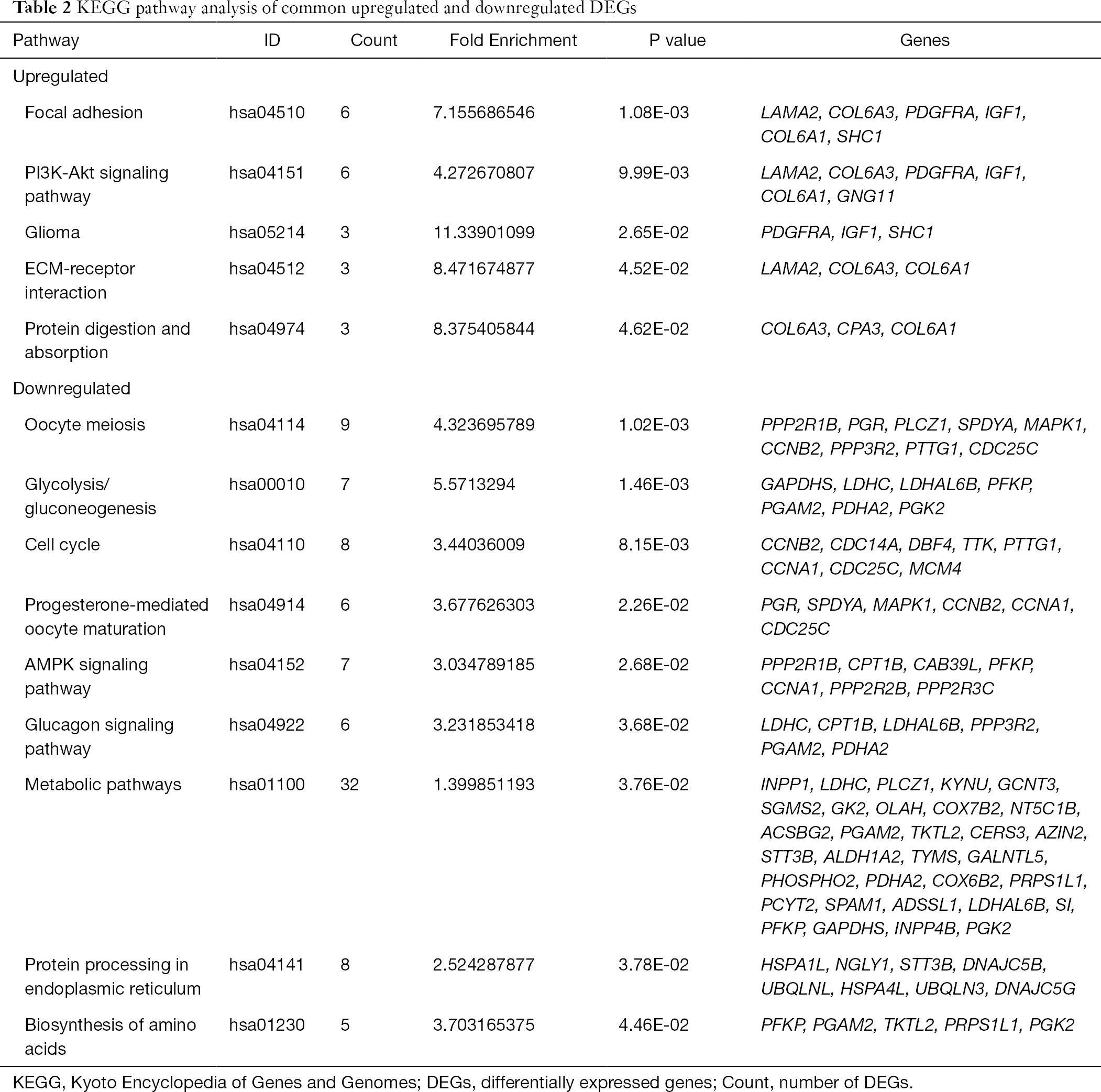 According to the STRING database, the PPI network of DEGs was constructed, with 328 nodes and 604 edges being mapped as presented in Figure 4A. The top 20 hub genes were evaluated using the Degree algorithm of the Cytohubba plug-in, as shown in Figure 4B and Table 3. GO and KEGG enrichment analyses of the 20 hub genes were performed using WebGestalt. As shown in Figure 5, the GO enrichment analysis was mainly involved in metabolic process, cellular component organization, biological regulation, cytosol, cytoskeleton, membrane, and protein binding. KEGG pathway enrichment analysis was mainly involved in cell cycle, oocyte meiosis, progesterone-mediated oocyte maturation, FoxO signaling pathway, one carbon pool by folate, and Huntington disease (Figure 6). 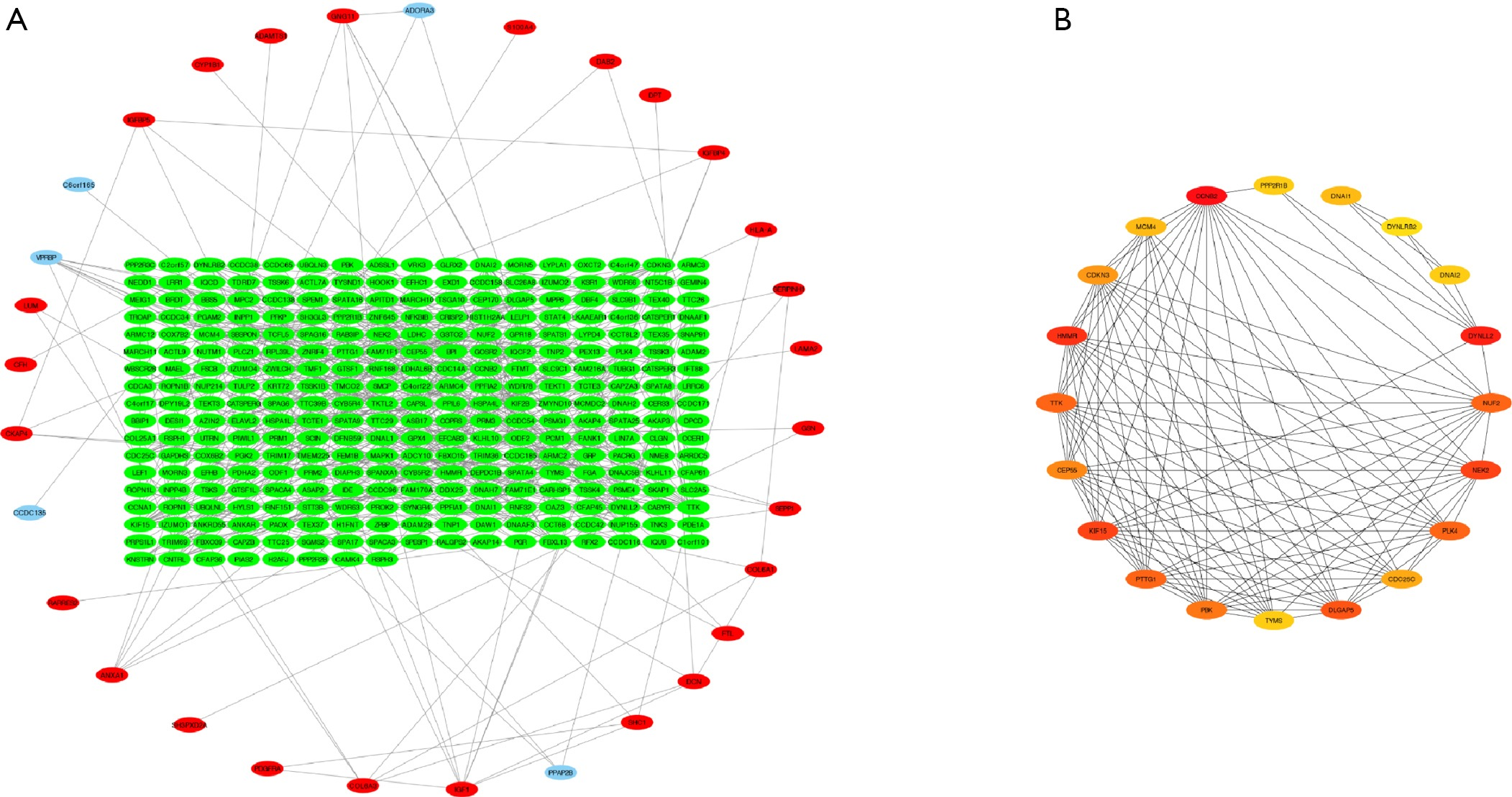 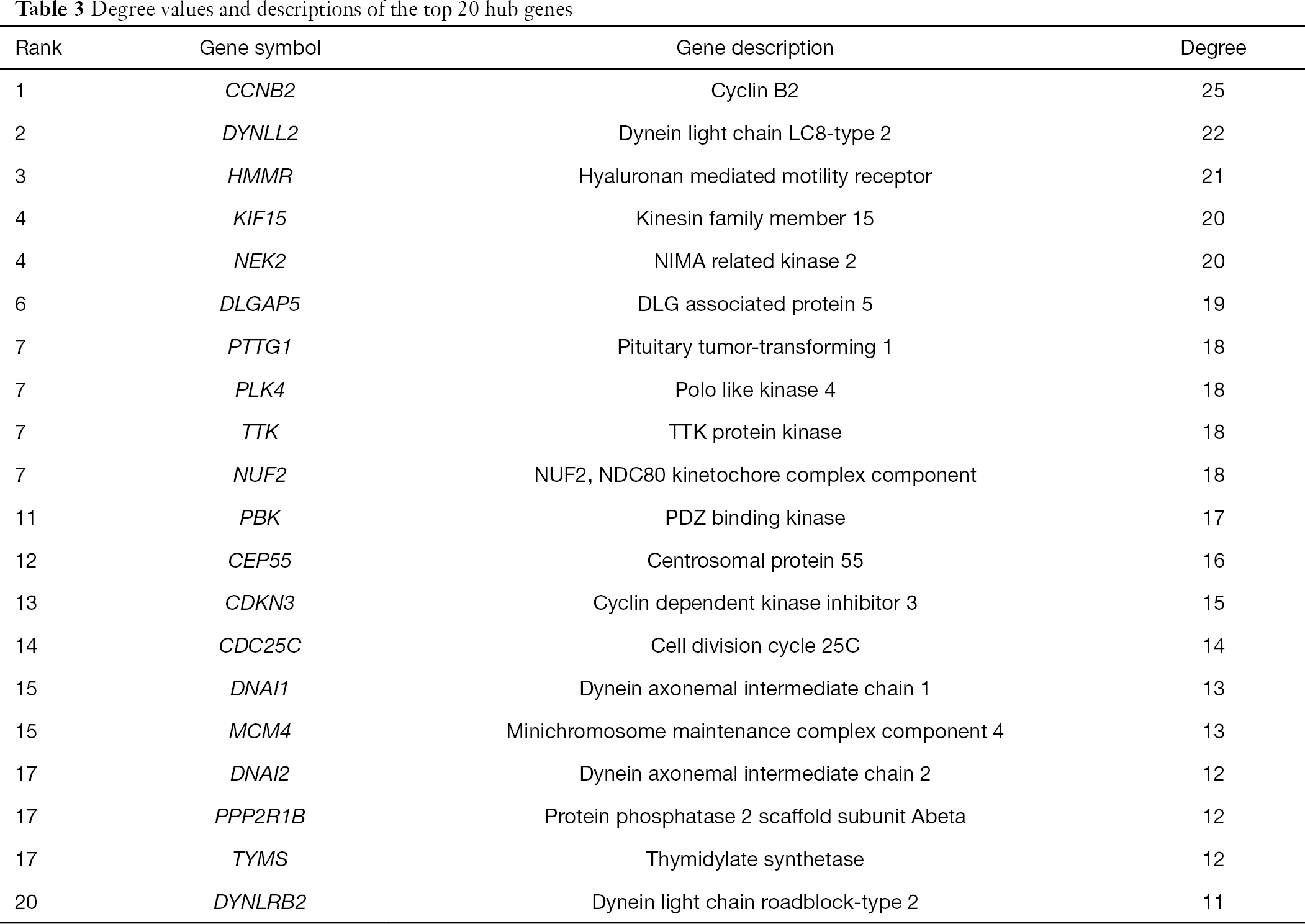 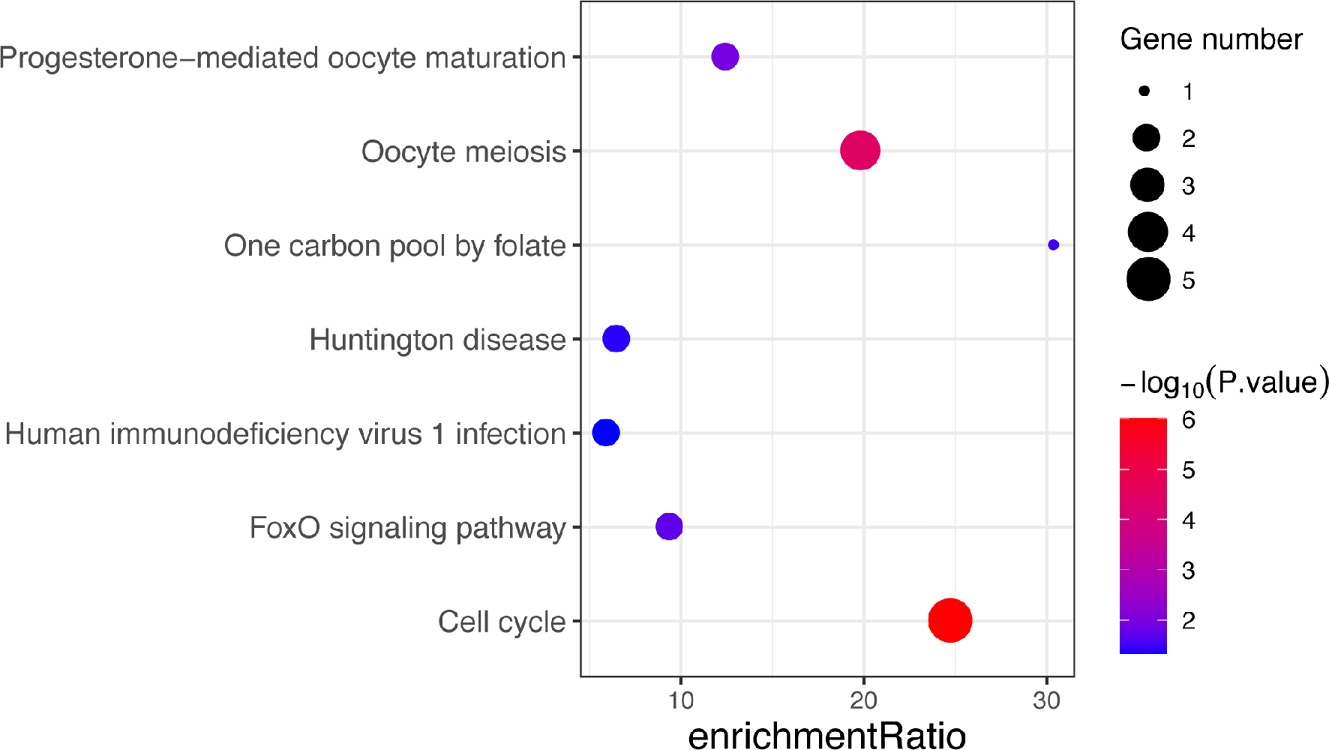 Analysis of hub genes in the NOA subgroup

There was no statistically significant difference in the expression of the 20 hub genes between the NOA-MA and NOA-PreMA subgroups of the GSE108886 dataset (Figure 7). 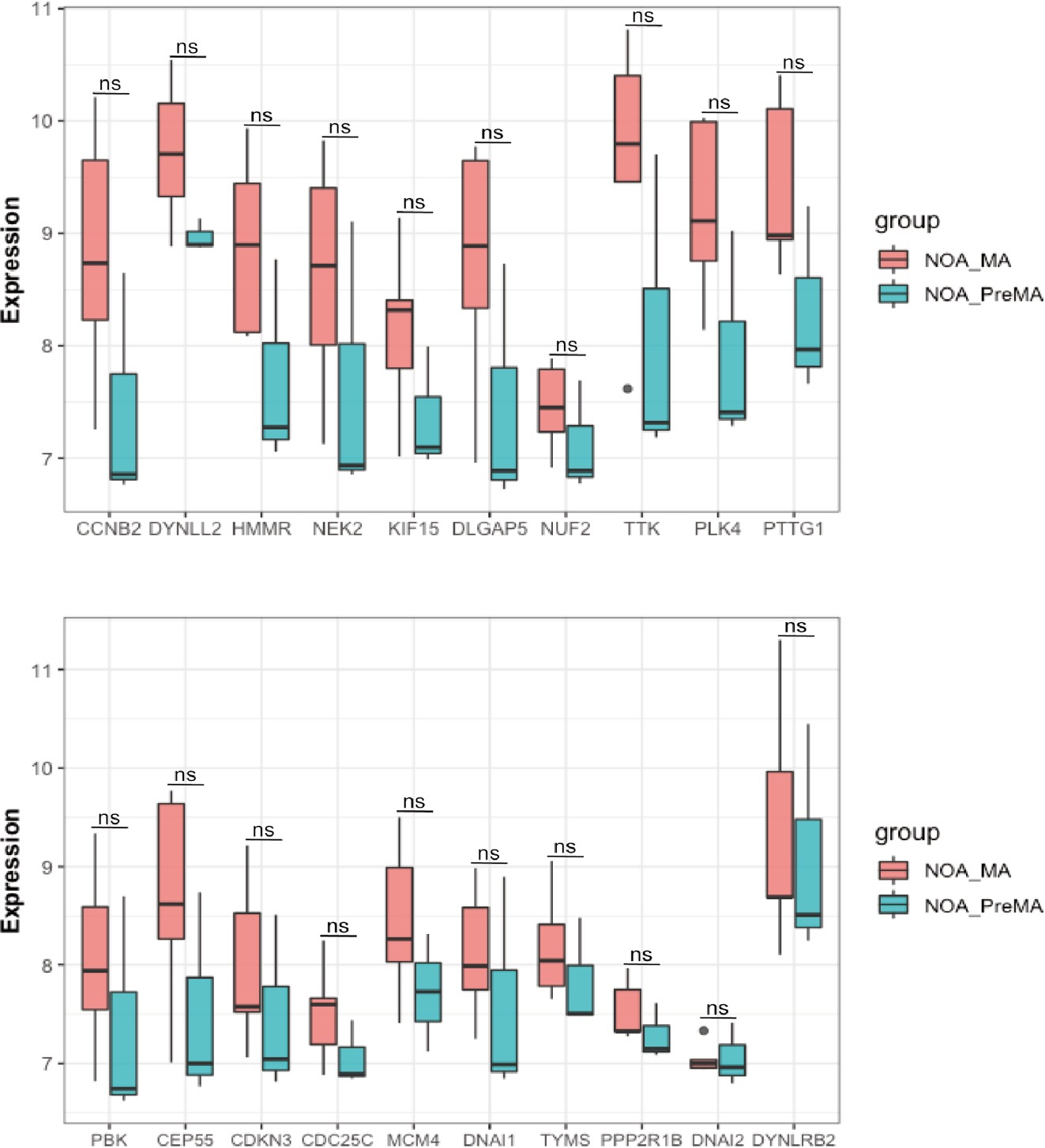 Validation of the hub genes 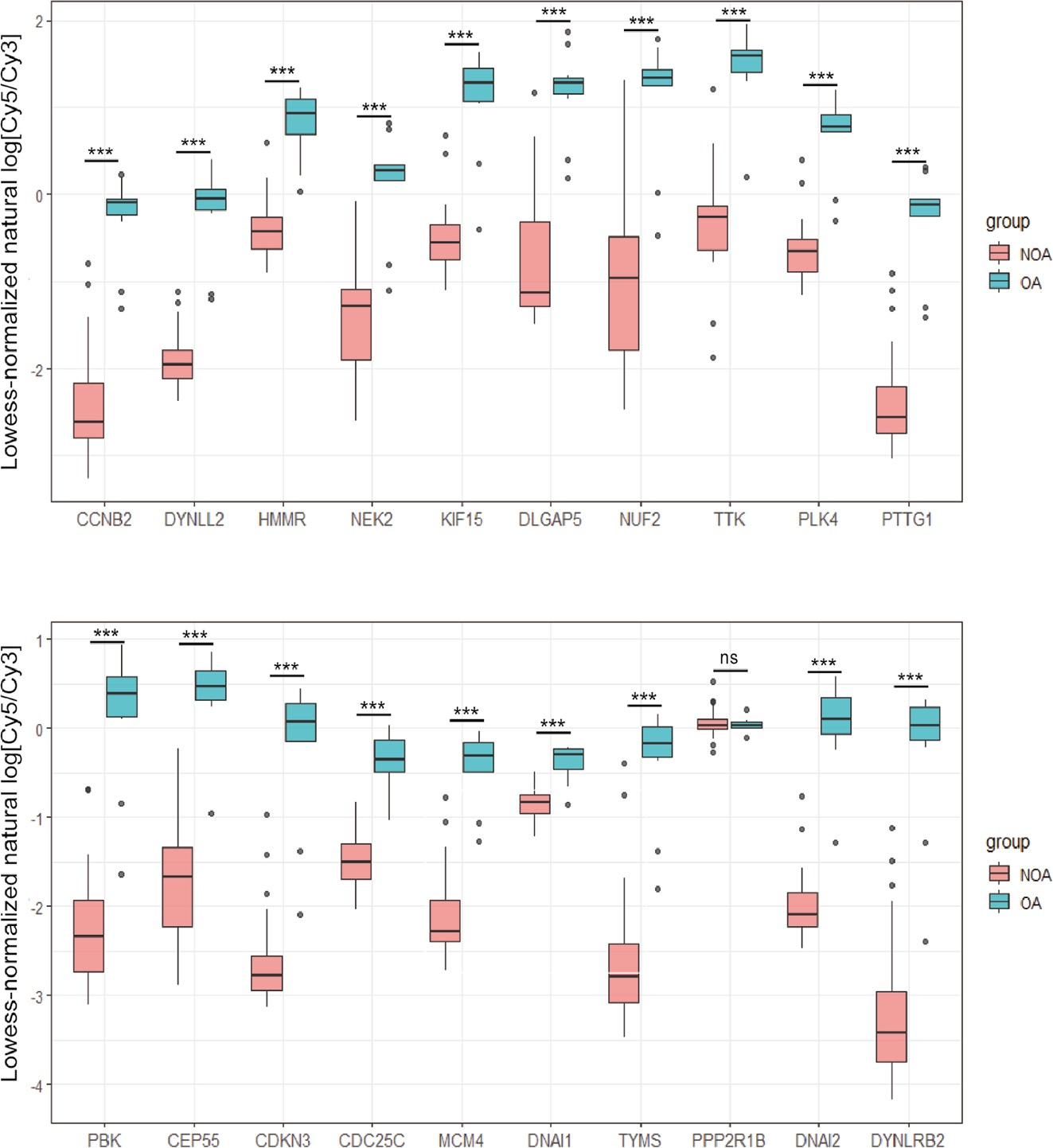 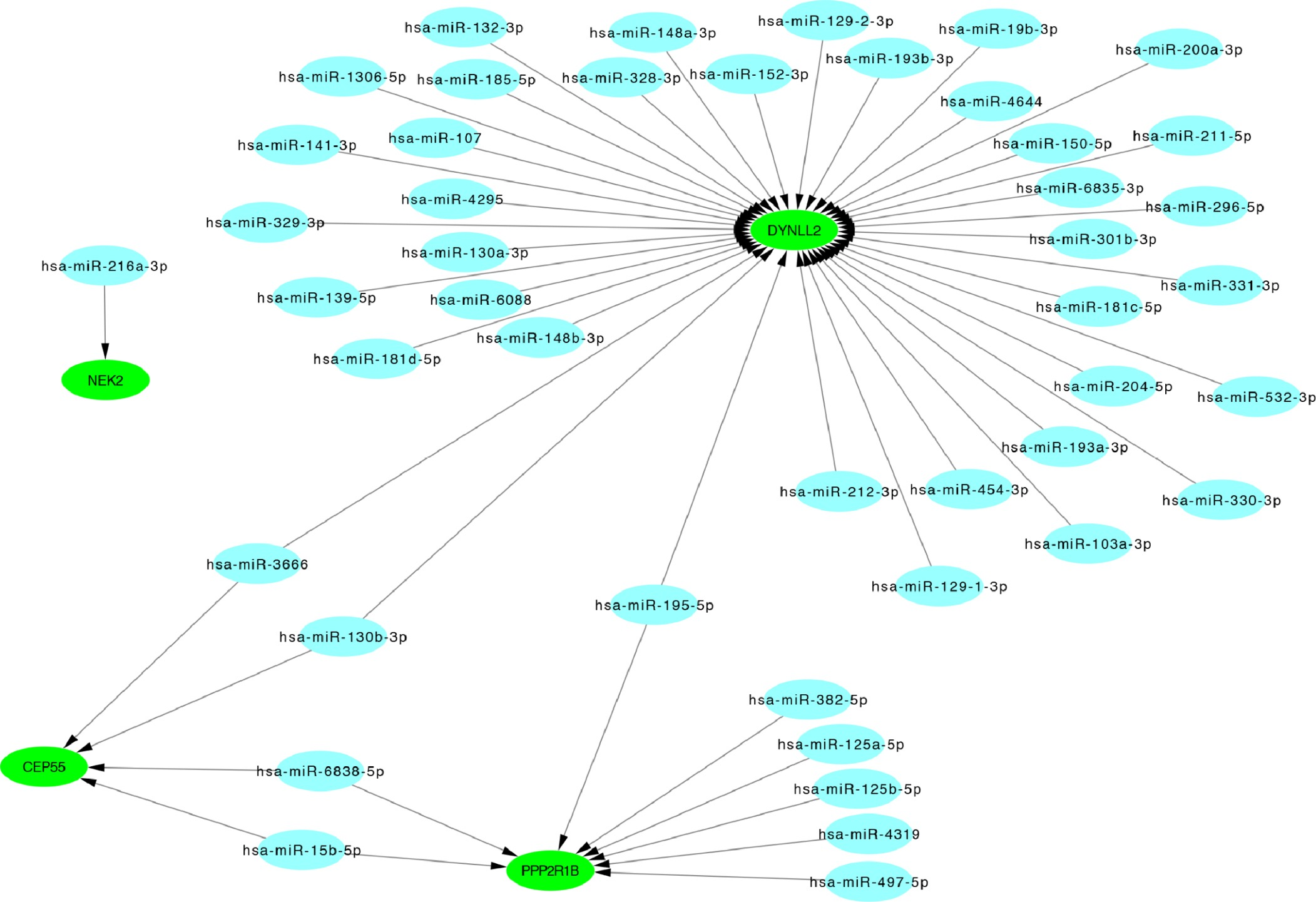 CCNB2 is a member of the cyclin B family, which contributes to G2/M transition in both mitosis and meiosis (19). Research has found CCNB2 to be continuously expressed in the medaka testis during the process of spermatogenesis (28). CDC25C is a member of the CDC25 family of protein phosphatases, which affects the G2/M phase transition of the cell cycle by activating CDC2 (26). One study reported that under the influence of selenite-induced oxidative stress, CDC25C was downregulated and p21 (a kinase inhibitor) increased (29). This resulted in the downregulation of the CDC2/cyclin B1 complex that regulates the G2/M phase checkpoint, thereby causing cell cycle arrest in male Balb/c mice (29). Lin et al. (30) examined the testicular messenger RNA (mRNA) transcription levels of 29 patients with NOA, including 18 patients with successful sperm extraction and 11 patients with failed sperm extraction. They found that the mRNA transcription levels of CCNB2 and CDC25C were significantly reduced in NOA patients with failed sperm extraction (30). This further indicates that CCNB2 and CDC25C might play an essential role in spermatogenesis. Hyaluronan-mediated motility receptor (HMMR), also known as receptor for hyaluronan-mediated motility (RHAMM), is a hyaluronic acid-mediated motor receptor (31). One study showed that the downregulation of HMMR is related to a decrease in sperm count, motility, and number of sperm with normal morphology (20). Meanwhile, NIMA-related kinase 2 (Nek2) is a serine/threonine kinase associated with G2/M phase transition of the cell cycle (21). In the testes of Oreochromis niloticus, Nek2 was generally found to be expressed in primary and secondary spermatocytes (21). Another study reported that Nek2 plays an important role in chromatin condensation during meiosis in male mice (32). TTK (or Mps1) is a dual specificity protein kinase with the ability to phosphorylate tyrosine, serine, and threonine. In reproductive tissues of male zebrafish, mps1zp1 mutation was found to reduce mitotic checkpoint activity, resulting in abnormal chromosomes in male germ cells, and severe developmental defects in aneuploid progeny (22). Polo-like kinases (Plks) are a conserved family of mitotic serine-threonine protein kinases that play a key role in centrosome function (33). PLK4 is a member of the Plks family and necessary for centriole duplication. In a study of PLK4 mutation, the majority of spermatids in Drosophila could not form flagella due to a lack of centrioles, while the depletion of PLK4 in human cells was also seen to induce apoptosis due to mitotic abnormalities (23). PLK4 mutations might also be associated with human Sertoli‐cell‐only syndrome (SCOS) (34,35). PDZ binding kinase (PBK) is a serine/threonine protein kinase, which was found in the outer cell layer of spermatogenic tubules by in situ hybridization, indicating that it plays an important role in the process of spermatogenesis (24). CEP55 (Centrosomal protein 55), located in the centrosomes of interphase cells, plays an important role in maintaining stable germ cell intercellular bridges during spermatogenesis and spermiogenesis in mice (25). In one study, the expression level of CEP55 in patients with maturation arrest was significantly lower than in patients with normal spermatogenesis (36). However, CEP55 overexpression causes change in the proportion of germ cells in mice, and it manifests as a Sertoli-cell-only–tubule phenotype, resulting in mouse infertility (37). Thymidylate synthase (TYMS) converts deoxyuridine monophosphate (dUMP) into deoxythymidine monophosphate (dTMP) using a 5,10-methylenetetrahydrofolate cofactor (38). The TYMS mutation has been associated with failed post-implantation development of the embryo in mice (38). DNAI1 and DNAI2 are members of the dynein intermediate chain family, and their mutations can lead to abnormalities in respiratory ciliary function and ultrastructure, which are important mechanisms of primary ciliary dyskinesia (PCD) (27). DNAI1 is also highly expressed in the testes (39). In male patients with PCD, infertility can be caused by sperm tail dysmotility (40). The DNAI1 mutation in male Drosophila has been associated with infertility caused by motile sperm (41). However, DNAI2 has not been reported in the literature with regard to spermatogenesis. Nine other hub genes, namely DYNLL2, KIF15, DLGAP5, NUF2, PTTG1, CDKN3, MCM4, PPP2R1B, and DYNLRB2, have also not been reported.

We compared the expression levels of 20 hub genes in the two subgroups (MA and PreMA) of NOA in the GSE108886 dataset and found no statistical difference. This suggests that these hub genes are not affected by NOA classification. This might have been due to the small sample size in the subgroup. A larger number of samples may be needed to confirm this.

In our study, we used WebGestalt for KEGG analysis of 20 hub genes and identified other pathways, including FoxO signaling pathway and Huntington disease. Studies have shown that these pathways are also related to spermatogenesis (42,43).

DYNLL2, CEP55, and PPP2R1B are three important target genes in the miRNA-gene regulatory network. CEP55 is described above. DYNLL2 was not involved in any KEGG pathways but could be regulated by most miRNAs, while PPP2R1B was involved in the oocyte meiosis pathway. Among these miRNAs, hsa-miR-3666, hsa-miR-130b-3p, hsa-miR-15b-5p, hsa-miR-6838-5p, and hsa-miR-195-5p have garnered the most research attention. However, these five miRNAs have not been studied in NOA, and further research is required.

A limitation in our study is that the potential miRNAs and hub genes in NOA need to be elucidated through experiments. Further research is required to verify and explore this in-depth.

The authors would like to thank the staff members of the GEO database and Yu Du at the Third Affiliated Hospital of Sun Yat-sen University for providing us with technical support.

Reporting Checklist: The authors have completed the STROBE and MDAR reporting checklists. Available at http://dx.doi.org/10.21037/tau-20-1029

Conflicts of Interest: All authors have completed the ICMJE uniform disclosure form (available at http://dx.doi.org/10.21037/tau-20-1029). The authors have no conflicts of interest to declare.

Ethical Statement: The authors are accountable for all aspects of the work in ensuring that questions related to the accuracy or integrity of any part of the work are appropriately investigated and resolved. As all the data in this study were from the GEO public database, the approval of the local ethics committee was not required.