Is a ureteral stent required before flexible ureteroscopy?

Urolithiasis is the third most common dysfunction of the urinary system, and affects 10–15% of the general population globally (1,2). The incidence of urolithiasis has increased over the past decades. Most patients who suffer from kidney stones are between 30 and 50 years old, and the recurrence rate is about 35–50% (3). Most stones that are 4 mm in diameter or smaller are spontaneously and asymptomatically eliminated from the body via urination. However, stones measuring 5 mm or larger are not typically removed from the body through the urine, and could cause severe pain, urethral obstruction, hydronephrosis, infection, and hemorrhage, and thus must be referred to a urologist (4,5). The diagnosis and treatment of urolithiasis is still a major challenge for urologists (4,6).

Over the recent decades, a variety of strategies have been developed and utilized for the surgical management of kidney stones, benefitting from many technological advancements (7). Generally, urologic surgical approaches are increasingly becoming less invasive and mainly include extracorporeal shockwave lithotripsy (ESWL), ureteroscopy (URS), and percutaneous nephrolithotomy (PCNL). The choice of surgical modality for ureteral and renal calculi are optimized individually on the basis of stone size, location, and composition (if known), as well as local expertise and patient preference (8). However, current European Association of Urology (EAU) guidelines recommend URS and PCNL endourological procedures, and ESWL has lost its place as the primary modality for active ureteral stone treatment, despite still being effective (1). At present, due to developing technologies in the endoscopic armamentarium, flexible ureteroscopy (fURS) has gained in popularity and become the primary therapeutic option for the treatment of renal stones (<2 cm) because of its high stone-free rates (SFRs) and low morbidity (8-11).

Some investigations have demonstrated that ureteral stent (Double-J tube) placement has been widely applied before fURS to dilate obstructed ureters and allow for better access to the upper tract during ureteroscopy, which could improve the efficiency of the procedure and significantly enhance the SFRs (12,13). Conversely, several studies have reported that there were no significant differences in the SFRs between pre-stented and non-stented patients who undergo fURS (12-15). Preoperative ureteral stents may also cause additional compilations, including urinary tract perforation, urosepsis, ureter avulsion, and bleeding with transfusion (12,13,16-18). Thus, it remains controversial whether a ureteral stent is required before fURS for patients without obvious ureteral strictures (19,20).

In this study, we performed a retrospective review of patients who had undergone fURS with and without preoperative stent placement. We compared and evaluated the differences in operative time, SFRs, re-operation rates, length of hospital stay, and hospital costs between the patient groups, and aimed to investigate whether a ureteral stent is required before undergoing fURS for patients suffering from upper urinary calculi.

We present the following article in accordance with the STROBE reporting checklist (available at http://dx.doi.org/10.21037/tau-20-1458).

All procedures performed in this study involving human participants were in accordance with the Declaration of Helsinki (as revised in 2013). This research was approved by the Research Ethics Boards of the People’s Hospital of Longhua Shenzhen. Written informed consent was obtained from the patients beforehand.

The included patients were classified into two groups depending on whether they had a ureteral stent placed prior to fURS. All patients had received ultrasonography, plain film of kidney-ureter-bladder (KUB), and computed tomography urography (CTU) examination before the operation. All routine experimental examinations, including urine analysis, urine culture, renal function testing, and coagulation profiling were performed prior to fURS. Clinical parameters such as gender, age, and comorbidities were retrieved and summarized in Table 1.

All surgical procedures were performed by four experienced urologists (QH, HL, JZ, and HW) using a standardized technique with last-generation flexible ureteroscopes. The decision to stent (F5 Double-J tube, Bard Medical, Covington, USA) or not to stent the patient prior to fURS was determined according to the discretion of the urologist. All patients had received general anesthesia and were placed in the lithotomy position. Subsequent ureteroscopic procedures were performed with zebra guidewires, including a safety wire (Sensor, Boston Scientific, Natick, USA). A ureteral access sheath was routinely used, and was typically 35 cm for women and 45 cm for men, with the sheath diameter determined according to the discretion of the surgeon.

The conventional F5 Double-J tube and F16 catheters were routinely placed postoperatively for all patients. Ultrasonic and KUB examinations were performed preoperatively, and at 1-month and 3-months after fURS to determine the residual calculus (representative images are shown in Figure 1). All patients were discharged from hospital in an outpatient setting.

A successful stone-free status was achieved if all endoscopically or radiographically visible stone fragments had been completely removed. The SFRs were determined and compared at 3-days and 1-month following fURS. The group B patients who had received preoperative stent placement showed a significantly higher SFR at 3-days after fURS than that of non-stented patients (51.6%, n=64/124 vs. 36.1%, n=43/119, P=0.0034). However, there were no notable differences in the SFRs between the two groups at 1-month after fURS (84.0% vs. 85.5%, P=0.895) (Figure 2). 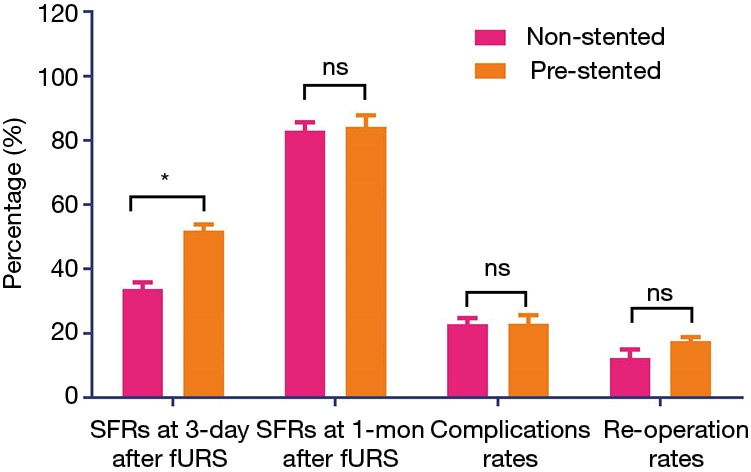 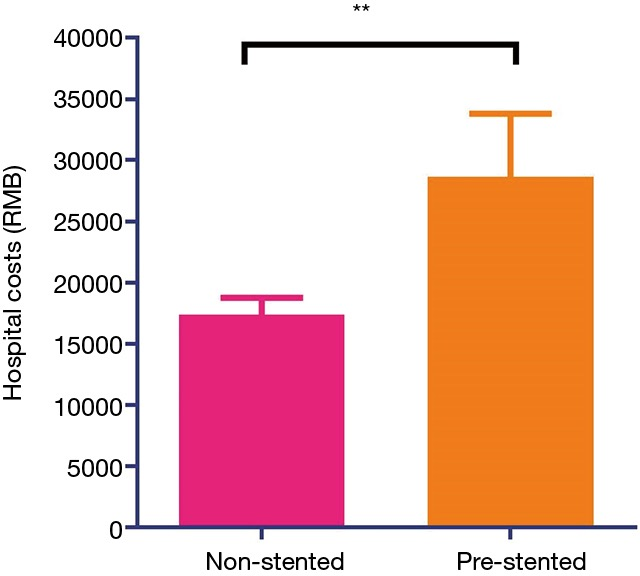 Figure 4 Comparison of hospital costs between the non-stented and pre-stented groups. **, P<0.001.

Benefitting from technical advancements and the introduction of a wide range of disposables, fURS has gained in popularity in recent years. The most recent EAU guidelines recommend fURS as the primary therapeutic option in the treatment of upper urinary tract stones <2 cm (9,21,22). Yet, the requirement for ureteral stent placement prior to fURS remains a topic of debate.

In the present study, we found that preoperative stenting could significantly increase the SFRs at 3-days after fURS, which seems to be consistent with several previous reports (12,17). However, the SFRs of stented and non-stented patients were quite similar with no significant differences at 3-months after surgery. In addition, the operative time was significantly reduced (by approximately 6 min) compared to that in the non-stented group. This could be attributed to the dilation of the ureter by preoperative stent placement, which enhanced the success rate of ureteroscopic access and provided improved vision of the ureteral tract (23). However, the reduced operative time makes little sense in clinical practice. Interestingly, several studies have claimed that the SFRs were significant higher in pre-stented patients who underwent fURS with no major complications (13,19,24-26). This difference might be due to an overall lower stone size and upper stone location in our series.

According to the results of our retrospective analysis, the complication and re-operation rates were not significantly different between preoperative stented and non-stented groups, which was similar to previous findings (12,14,17,27). No major complications were encountered during stent placement or ureteroscopy in presented patients in this study. Other complications, such as postoperative bleeding and ureteral mucosal injury, which might be caused during intraoperative flexible ureteroscope sheath insertion and Holmium laser lithotripsy (28,29), were not included in this study.

Although preoperative stent placement is significant in the treatment of upper ureteral calculi, it results in an increased hospital stay and hospital costs. This is likely attributable to the extra preoperative stenting procedure, which will inevitably extend the hospital stay and increase hospital costs. For patients with ureteral stone street, where large residual stones cannot be excreted via ESWL, rigid ureteroscopy or secondary fURS should be performed subsequently (30). However, this is not related to the preoperative placement of Double-J tubes.

There are some limitations in our study that should be noted. Firstly, the major limitation of our study was that the consensus for Double-J stent placement was not identified preoperatively. The urologists decided whether or not to stent independently, without guidelines or previous agreement. The preoperative stent size and duration of SFRs was unclear. Secondly, the number of included patients included is not large enough, owing to the fact that this study was performed in one single hospital. Thirdly, considering that this is a retrospective study, potential inherent selection bias cannot entirely be excluded.

In summary, we found that preoperative ureteral stent placement can help to decrease the operative time and improve the SFRs for patients undergoing fURS, but not significantly so. Preoperative stenting extended the length of hospital stay and increased hospital costs, but had no influence on complication and re-operation rates. These findings lead to the conclusion that preoperative ureteral stent placement before fURS for the treatment for upper urinary calculi is not reasonable. However, given the limitations of this study, more high-quality investigations including prospective randomized clinical trials are required to confirm our findings.

Reporting Checklist: The authors have completed the STROBE reporting checklist. Available at http://dx.doi.org/10.21037/tau-20-1458

Conflicts of Interest: All authors have completed the ICMJE uniform disclosure form (available at http://dx.doi.org/10.21037/tau-20-1458). The authors have no conflicts of interest to declare.

Ethical Statement: The authors are accountable for all aspects of the work in ensuring that questions related to the accuracy or integrity of any part of the work are appropriately investigated and resolved. All procedures performed in this study involving human participants were in accordance with the Declaration of Helsinki (as revised in 2013). This research was approved by the Research Ethics Boards of the People’s Hospital of Longhua Shenzhen. Written informed consent was obtained from the patients beforehand.