Complex upper urinary tract reconstruction operations are challenging for urologists. More importantly, another burning question is that the effect of this kind of procedure is hard to evaluate (1,2). Traditional methods, including contrast-enhanced CT, MRI and ultrasonography, mainly show the shape of the urinary system without allowing for dynamic observation. More difficult to interpret is the dilatation that remains after relief of obstruction. Diuresis renography could show the dynamic transport of urine in the upper urinary tract. The combination of classic image examination and diuresis renography is currently widely used to assess the patency of the upper urinary tract (3).

The upper urinary tract remains at different degrees of dilation for most patients who underwent ureteral reconstructive surgery, which makes it difficult to assess the obstruction (4). Failure to identify upper urinary tract obstruction before removing the nephrostomy tube may result in recurrent flank pain, fever, deterioration of hydronephrosis, impairment of renal function and secondary percutaneous nephrostomy. Video urodynamics can provide information on both dynamic process of urine delivery and functional parameters such as compliance, dynamic morphological changes and contractility. Therefore, video urodynamics is used for multiple lower urinary tract dysfunctions (5,6). However, it is regrettable that upper urinary tract video urodynamics is rarely used for various reasons. The lack of standardized operating procedures and its alleged inconsistent ability to predict the functional outcome make it difficult to popularize. Additionally, unphysiological approach and invasive manipulation for renal pelvis pressure measurement limits its application (7,8).

In this report, we aim to develop a modified Whitaker in assessing the surgical effects of complex upper urinary tract reconstruction and summarize our preliminary experience of this test with 12 patients in a single tertiary center. We present the following article in accordance with the MDAR reporting checklist (available at: http://dx.doi.org/10.21037/tau-20-1055).

From January 2016 to December 2018, 136 consecutive patients underwent upper urinary tract reconstruction operations. The complex reconstruction was defined as long ureter defects or multiple lesions that can not be treated with stricture resection and anastomosis, and failure of primary surgery that needs secondary reconstruction. Twelve patients who underwent complex reconstruction were assessed by the modified Whitaker test at 3 months after the surgery. Data on patients’ characteristics, etiology, laboratory data, imaging studies, surgery information and perioperative data were collected. The study was conducted in accordance with the Declaration of Helsinki (as revised in 2013) and the Harmonized Tripartite Guideline for Good Clinical Practice from the International Conference on Harmonization. This study was reviewed and approved by the Ethics Board of Peking University First Hospital (registration ID:2019-SR-134). All patients enrolled completed the informed consent form.

The patient was positioned supine. The bladder was drained by a 16F Foley catheter just before the test. All nephrostomy tubes were placed before the reconstruction operation for draining urine and were maintained after the surgery. The nephrostomy tube was checked to make sure it was unobstructed. Nephrostomy tubes and urinary catheters were connected to the pressure transducer respectively. Then, set the pressure measuring device to zero in vivo.

The diluted X-ray contrast medium was perfused through the water pump. Different from the flow rates suggested by Whitaker (7), the flow rate was initially set at 1 mL/min and increased gradually in this study. Based on the flow rate, the test was divided into two phases. In phase 1, the flow rate was set as the ordinary physiological rate of urine production (1–3 mL/min). Normal pelvis morphology is defined as no hydronephrosis in the renal pelvis and calyces. In phase 2, the function of the upper urinary tract was assessed by increasing the flow rate. The termination flow rate was achieved when the patient experienced loin pain, or the level of relative pressure (which was defined as renal pelvis pressure minus bladder pressure) quickly increased by more than 22 cmH2O, or the flow rate reached 25 mL/min. After the test was finished, the fluid remaining in the renal pelvis was drained. 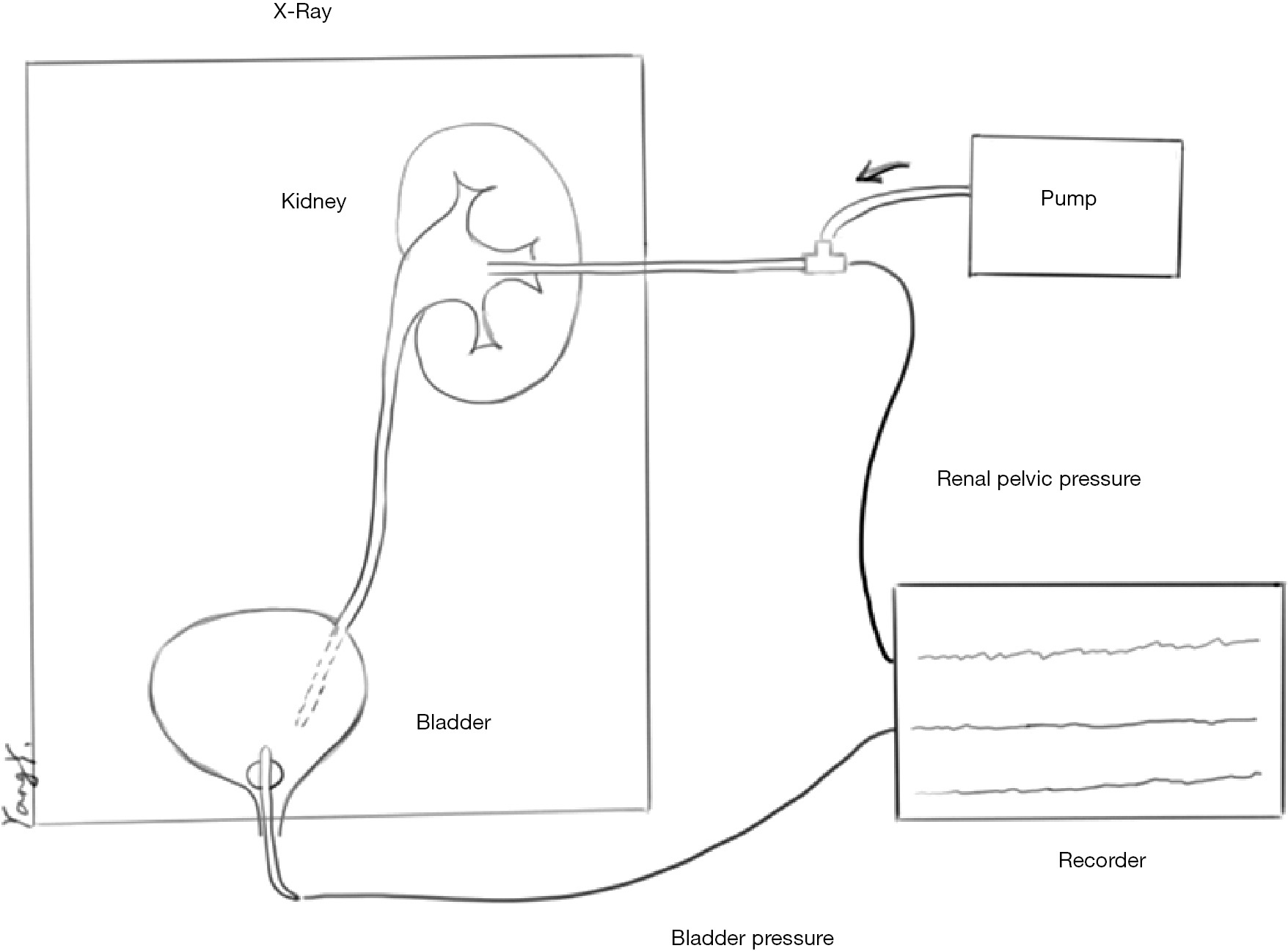 A total of 12 patients who underwent complex upper urinary tract reconstruction received modified Whitaker test. The characteristics were shown in Table 1. There were 6 males and 6 females. The mean age was 38 years (range, 16–60 years). The reconstructive surgery included ileal ureter replacement, bladder flap replacement of long ureteral stricture and secondary reconstruction. Each of these strategies had 4 patients. All tests were successfully completed without adverse reactions such as fever, severe black pain or extravasation of perfusion fluid. 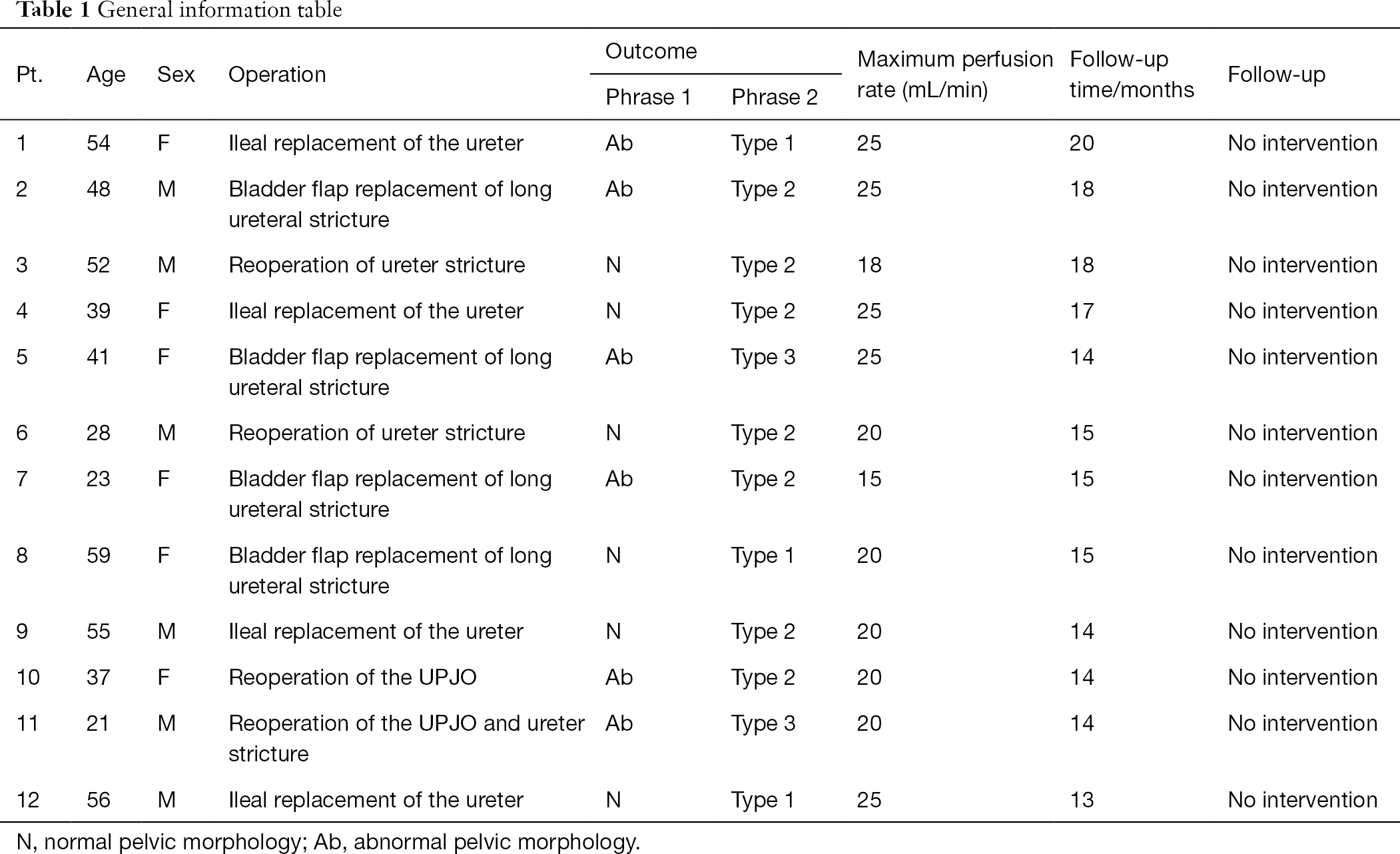 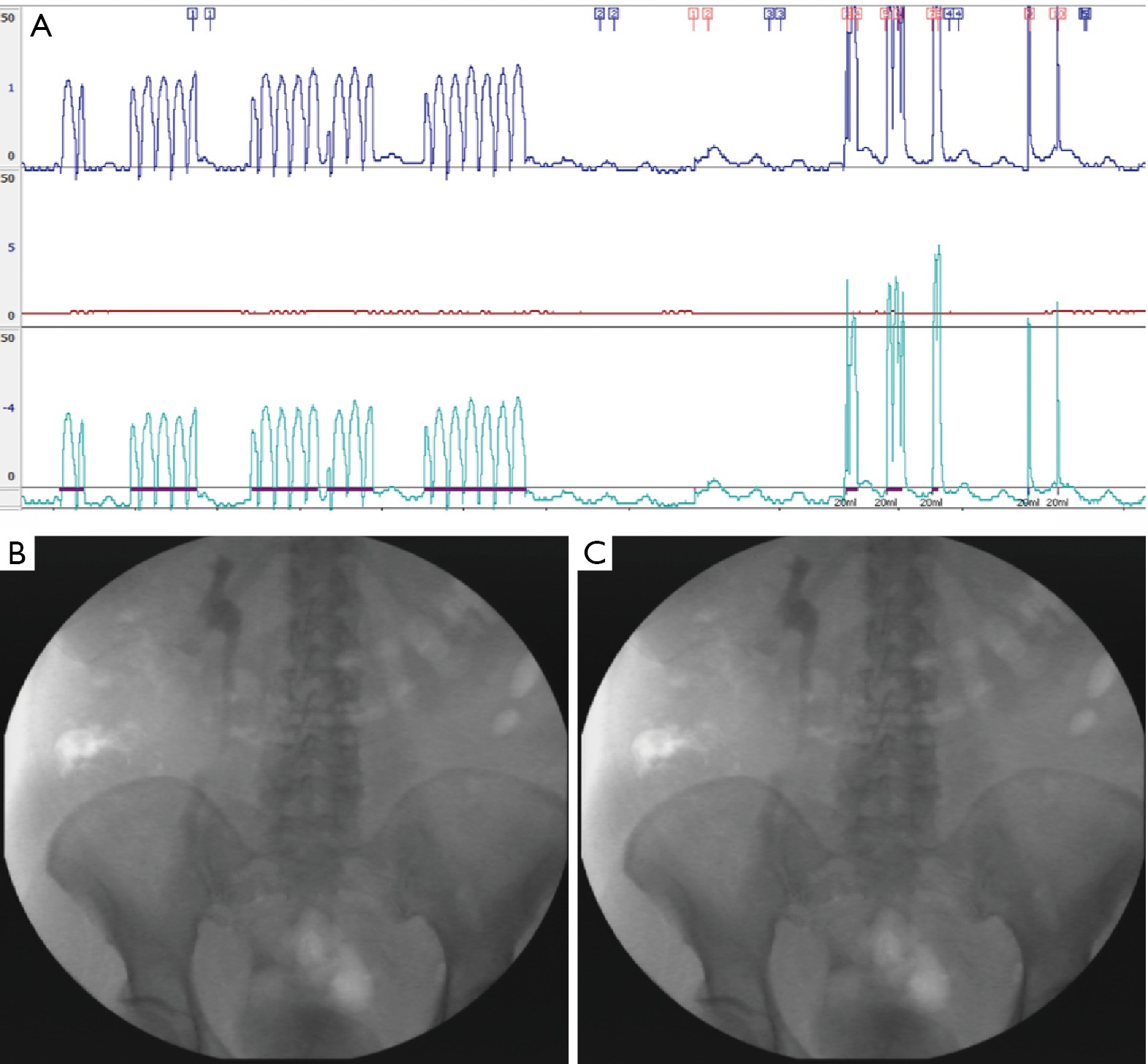 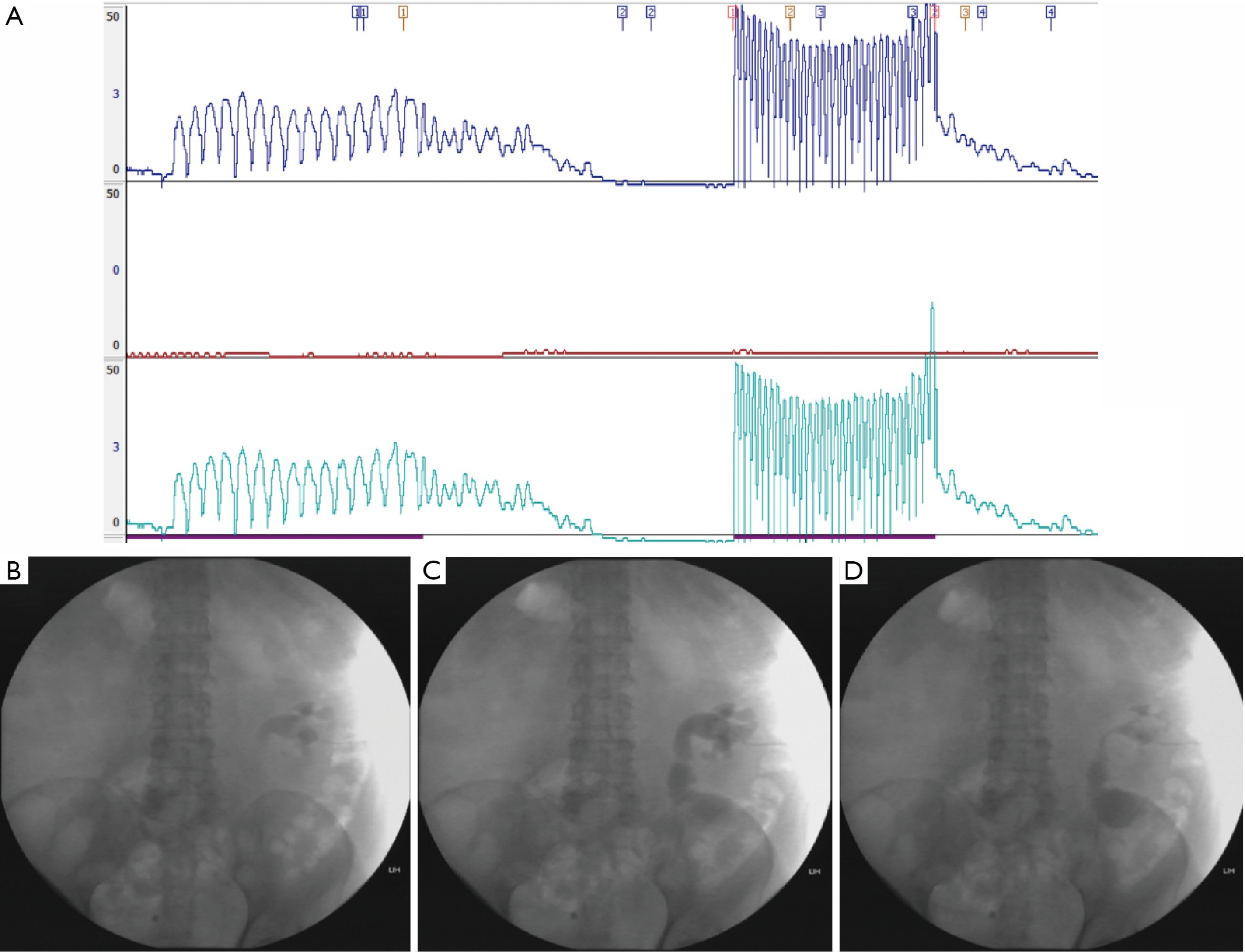 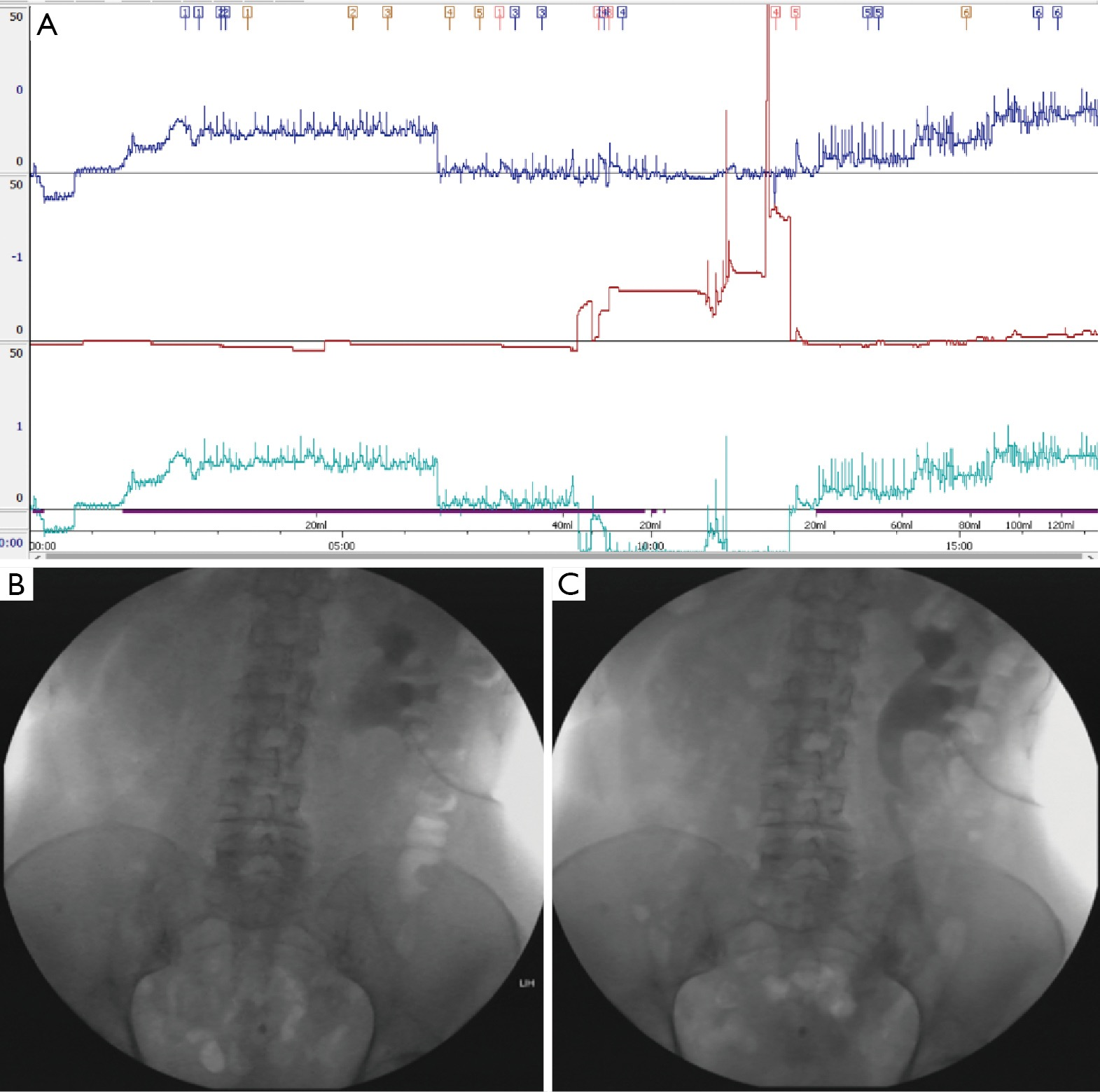 Due to poor urodynamic results, 2 patients with type 3 maintained the nephrostomy tube after the test. The nephrostomy tubes of both patients were clamped on the second day after the examination. During a close follow-up, it was confirmed that these 2 patients had no symptoms and hydronephrosis remained stable on B-ultrasound, and the tube was removed 2 weeks and 4 weeks after the examination. None of the 12 patients in this study received further treatment for recurrent symptoms and exacerbation of hydronephrosis.

Another difference from the traditional Whitaker test is the perfusion rate. In the classic Whitaker test, the perfusion rate was constant at 10 mL/min, which came from healthy volunteers. Because 10 mL per minute was considered close to the physiological maximum urine production rate (7). Therefore, the classic Whitaker test was theoretically performed in the physiological range. However, this fixed perfusion rate has since been questioned by several studies (15,16). In some specific physiological conditions, the urine output of a single kidney could easily exceed 10 mL/min. In addition, Lupton et al. suggested that a higher perfusion rate (12–20 mL/min) was necessary to unmask some obstructions (15). At the traditional perfusion rate, patients would have been classified into the non-obstructive group, but at higher perfusion rates, the relative pelvis pressure would exceed 22 cmH2O. The ratio was as high as 32.1% (9/28). Further examples showed that these patients with obstruction still needed further treatment to avoid deterioration of renal function (15). Some researchers believed that perfusion at up to 20 mL/min could diagnose so-called high-output obstruction. Others, while recognizing this phenomenon, doubted its clinical significance (17).

Both type 1 and type 2 patients in this study belonged to the non-obstructive group in the traditional Whitaker test. However, we found some interesting differences. Type 1 is interpreted as a super unobstructed type, and the relative pelvis pressure is maintained at the baseline level even under conditions of high-speed perfusion. Type 2 is interpreted as a general unobstructed type. The relative pelvis pressure in this type of patient will increase with perfusion, even exceeding 15 cmH2O, but with strong peristalsis of the ureter, the pressure will drop to close to the baseline level. This phenomenon is most typical in ileal replacement of ureter cases. Type 3 patients belong to the equivocal obstruction group in the classical Whitaker test. Although the relative pelvis pressure does not reach 22 cmH2O under conditions of high-speed perfusion, the ureteral peristalsis of patients in this group weakens or disappears, suggesting that close follow-up is needed afterwards. The renal pelvis typically holds 3–10 mL of urine (18). The accuracy of the Whitaker test will reduce in patients with severe hydronephrosis who had a renal pelvis volume of more than 70 mL (17). This may explain why the two patients belonging to the type 3 group in this article also had their nephrostomy tube safely removed and why the hydronephrosis remained stable during follow-up. However, patients of this type still need close follow-up to determine whether poor upper urinary tract motility causes damage to renal function.

An important factor that has long influenced the clinical application of the Whitaker test is that the test is invasive. Patients had to undergo a percutaneous nephrostomy for this test. A 25-year summary of experience reported that immediate testing was not recommended after indwelling nephrostomy tubes. Because the kidney status was unstable, it would affect the accuracy of the test results. Patients needed to have a nephrostomy tube 3–7 days before the test to obtain reliable results (9). This would undoubtedly bring more inconvenience to the living conditions of patients. In the present study, patients did not need to undergo more invasive procedures. This is a clear advantage of the Whitaker test in postoperative patients. These patients have a relatively long indwelling nephrostomy tube after surgery. It is necessary to pay attention to the occurrence of local infection and blockage of nephrostomy tubes before the examination.

This study is a preliminary discussion of the Whitaker test applied to patients after complex upper urinary tract reconstruction surgery and has many limitations. The first was the small sample size, which made comprehensive classification difficult. Second, all the patients enrolled in this study had undergone upper urinary tract reconstruction. Compared with patients who had not undergone surgery, the influencing factors were more numerous. In addition, the lack of controlled examination methods was also a deficiency of this study. Follow-up studies need to expand the number of cases, and studies for specific surgical methods need to be further carried out.

In conclusion, the modified Whitaker test is safe and feasible in postoperative evaluation of complex upper urinary tract reconstruction surgery. Detailed results can provide more evidence to judge whether nephrostomy tube could be removed safely. Large samples and long term follow-up result are necessary for verification of this modified procedure.

Reporting Checklist: The authors have completed the MDAR reporting checklist. Available at http://dx.doi.org/10.21037/tau-20-1055

Conflicts of Interest: All authors have completed the ICMJE uniform disclosure form (available at http://dx.doi.org/10.21037/tau-20-1055). XL has served as an unpaid editorial board member of Translational Andrology and Urology since March 2012. The authors have no other conflicts of interest to declare.

Ethical Statement: The authors are accountable for all aspects of the work in ensuring that questions related to the accuracy or integrity of any part of the work are appropriately investigated and resolved. The study was conducted in accordance with the Declaration of Helsinki (as revised in 2013) and the Harmonized Tripartite Guideline for Good Clinical Practice from the International Conference on Harmonization. This study was reviewed and approved by the Ethics Board of Peking University First Hospital (registration ID: 2019-SR-134). All patients enrolled completed the informed consent form.