Stretched penile length and its associations with testosterone and infertility

Male infertility is relatively common, affecting roughly 1 in 8 couples and 10% of all men; it is associated with a multitude of factors including genetics, trauma, hypogonadism, oncological diseases, and sexual dysfunction (1,2). In addition to these intrinsic factors, infertility has also been linked to environmental and lifestyle factors such as cigarette smoking, alcohol intake, drug use, obesity, psychological stress, advanced paternal age and diet (3). Previous studies have sought to identify anatomic findings that are associated with adult male fertility. The testicular dysgenesis theory postulates that certain genomic and environmental exposures (such as phthalates) during fetal development result in a related impact on the occurrence of hypospadias, cryptorchidism, testicular cancer and infertility (4).

One exam finding associated with male fertility is the anogenital distance (AGD), or the distance between the anus and the external genitalia. AGD is a sexual dimorphism that is approximately twice the length in males compared to female newborns (5). Fetal androgen exposure during a period known as the masculinization programming window (MPW) is critical for programming the adult dimensions of reproductive elements such as AGD and penile length (6-8). Endocrine disruptions during this period (between 8–14 weeks) can permanently alter genital development, growth, and function (7). While the potential adult size of these components is predetermined by androgen action within the MPW, their subsequent growth also depends on sufficient postnatal androgen exposure, including during puberty for penile length (6). A reduced male AGD is, therefore, potential evidence of disrupted pre- or post-natal androgen deficiency (9).

Deficient androgen exposure during the MPW results in various defects such as hypospadias, cryptorchidism, and low sperm production in addition to smaller adult testes, prostate, seminal vesicles, and penis (6,8,10-14). Significantly, all of these abnormalities are paralleled by reduction in AGD, a measurement found to be stable throughout adult life (9,15,16). Notably, a study by Scott et al. found that while testicular size is largely determined outside of the MPW, it still correlated highly with AGD, suggesting that some other factor is programmed by androgen activity during the MPW which affects final testis size (13). As such, correlations between AGD and various elements of reproductive development including penile length, testicular size, reproductive anomalies, sperm quality, and fertility have been demonstrated in both rodents and humans (17). Adult testicular function and infertility have been linked to a common fetal absence of androgen exposure (17). A shorter AGD has been significantly correlated with lower fertility, sperm density and total motile sperm count (18,19) as well as hypogonadal testosterone levels (20).

While penile length has been associated with androgen levels in infancy and puberty (7,14), it has not been correlated with adult testosterone levels (20). In addition, like AGD, penile length measurements have been suggested to be consistent throughout adult life (15). Furthermore, AGD and penile length have been shown to be highly correlated (14,21). As such, it is possible that common underlying mechanisms of fetal androgen exposure are responsible for both genital development (penile length/AGD) and fertility.

As other anatomical/genital developmental findings such as AGD have been correlated with adult fertility, we sought to identify whether adult stretched penile length (SPL) also carries this association.

The authors present the following article in accordance with the STROEB reporting checklist (available at http://dx.doi.org/10.21037/tau-20-788).

The study was approved by The University of Utah Institutional Review Board, IRB# 00098463. All procedures performed in this study were in accordance with the Declaration of Helsinki (as revised in 2013). Because of the retrospective nature of the research, the requirement for informed consent was waived. After obtaining institutional review board approval, we retrospectively reviewed data of all males age 18–59 presenting to a Men’s health clinic from 2014 to 2017. Patients were excluded if they had a history of Peyronie’s disease, prior penile surgery, prostatectomy, or if they were receiving any testosterone replacement therapy (including exogenous testosterone, clomiphene, anastrozole, or gonadotropins). SPL was measured from pubic symphysis to the tip of glans on the dorsal side using a non-flexible ruler, with penis on maximal stretch (22). SPL is an essential measurement in any male presenting with a sexual complaint, as such it was instituted as a standard exam component at our men’s health clinic prior to initiation of the study period. One of three providers performed the measurements over the study period. Data on testosterone levels, based upon early morning blood draws, were collected when available.

We used t-test and Chi-square test to compare baseline characteristics and testosterone levels between the two groups (infertile vs. other). Patients were included in the infertile group if they were presenting to the clinic with a complaint of male infertility. The “other” group consisted of those presenting with any other urologic complaint. Pearson correlation and scatterplots were used to measure and graph the correlations between baseline testosterone and SPL in both groups. Linear regression was used to assess the association between infertility and SPL after adjusting for patient age, BMI, race, and baseline testosterone.

Overall, 664 patients were included in the analysis, with 161 in the infertile group and 503 who were seen for other complaints, 218 patients were excluded based on the above criteria (Figure 1). Patients who presented with infertility were, on average, younger than men in the other group (33.2 vs. 42.1 years, P<0.001). BMI was similar with a value for both groups and the majority of men in both groups were white/Caucasian. A total of 360 patients had testosterone levels measured (152 infertile, 208 other group); there was no significant difference in mean total testosterone between the groups (Table 1) (Normal testosterone 300–720 ng/dL). 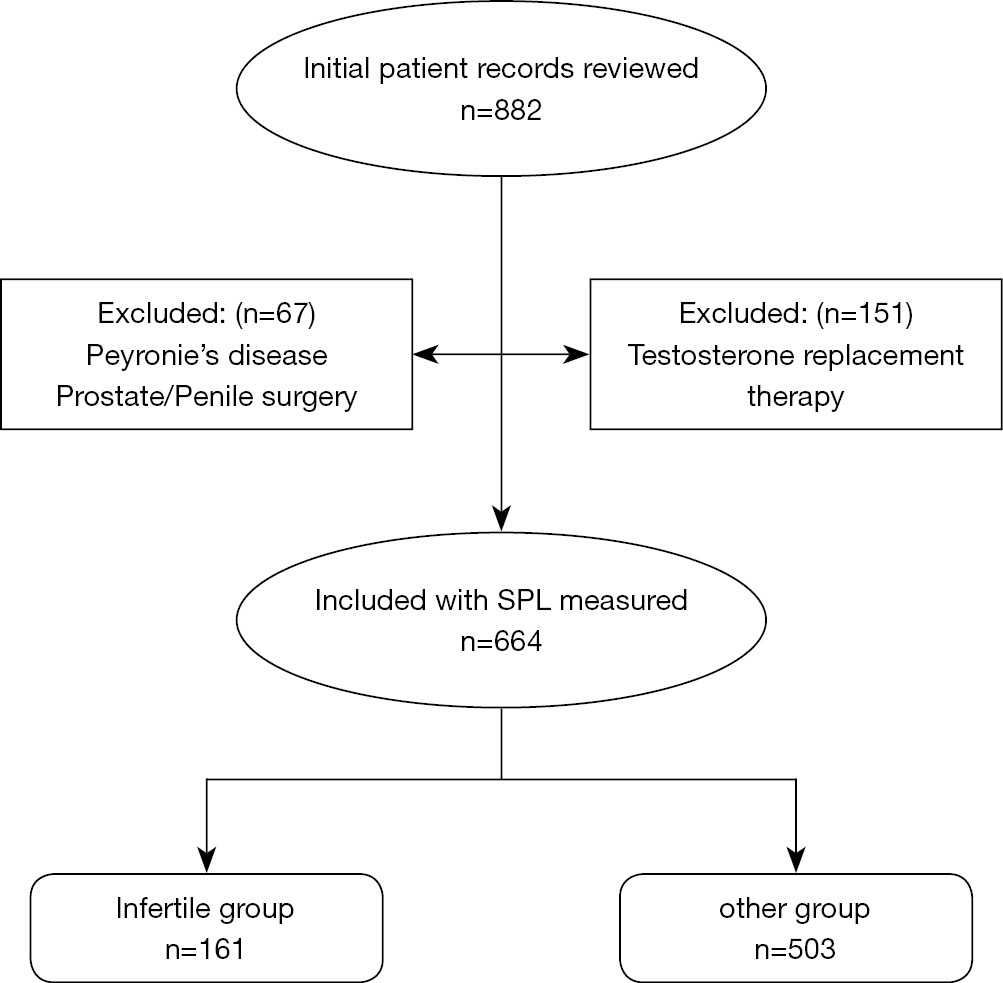 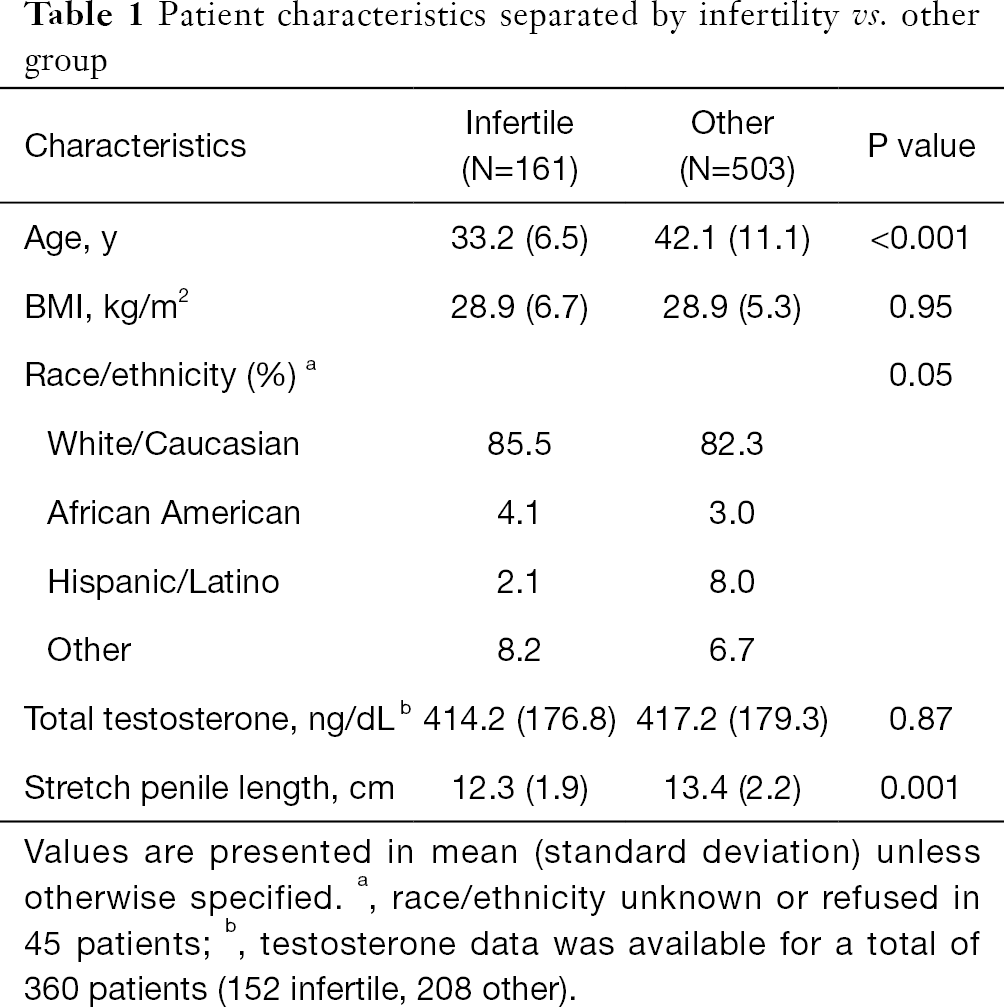 In our study we found an association between male infertility and shorter SPL. Men who presented with infertility complaints had on average 1 cm (95% CI: 0.52 to 1.53 cm) shorter SPL as measured during physical exam. Furthermore, there was a weak correlation between adult total testosterone levels and penile length. If variations in developmental androgen exposure are responsible for these findings, these differences did not persist into adulthood. These findings coincide with previous reports on AGD suggesting a common developmental pathway between AGD and SPL, supporting the testicular dysgenesis theory (4).

Patients who presented with infertility were an average of 9 years younger than those with other complaints. This is an expected finding as younger men likely present earlier when trying to conceive while older men present later with age-related hypogonadism, erectile dysfunction symptoms, and other complaints. The lack of variance in BMI was slightly unexpected considering that elevated BMI has been linked with male infertility (23-25). Perhaps this was offset by patients in the other group seeking medical attention for other comorbidities of obesity including erectile dysfunction.

Previous studies have demonstrated that while prenatal androgen exposure affects the growth and eventual size of the reproductive organs, postnatal androgen exposure is still required to obtain potential growth (6,8). While penile length has been shown to change prepubertally, adult penile length remains fairly constant (7,14,15). It is worth noting that the SPL values we reported of 12.3cm and 13.4cm for the infertile and other groups respectively, are both within the normal ranges according to reported nomograms and the difference is likely without clinical significant (26-28).

While adult SPL was slightly shorter in men presenting with infertility, it remains unknown if this difference is a result of genetic or congenital factors associated with infertility, underlying hormonal differences, or a result of other confounding variables. If these study results are valid, then it provides further evidence that the pathways of AGD and penile development are linked, and that sexual dysfunction/reproductive anomalies share a root cause as proposed by the testicular dysgenesis theory. Thus far these findings should be viewed as hypothesis generating and adding to the body of medical knowledge as a whole rather than used to inform patients in a clinical setting.

Caution on the interpretation of findings

Both male infertility and penile size are sensitive topics and remarkable sources for anxiety in men (30-33). Our findings suggest a potential association between men presenting with a complaint of infertility and a shorter SPL; but it is important to understand what these findings do not mean. This is not the same as suggesting that men with shorter penile lengths have reduced fertility. Likewise, one cannot conclude that all men with infertility have reduced penile lengths. As previously mentioned, the averages of both the “infertile” and “other” groups fall within normal sizes on reported nomograms, reinforcing the idea that the shorter length found in our study in the infertile group is still within the normal length ranges and should not be interpreted as “short.” In fact, the average difference between the two groups was only 1 cm (0.4 inch) and is unlikely to be of any clinical significance in terms of intercourse, sexual pleasure, and fecundity.

This study has a number of limitations. With lack of randomization and the retrospective nature of the study, not all confounding factors are accounted for. The “other” group does not necessarily represent “fertile” men or a random sampling of the general population as they all had some urologic complaint. Testosterone values were only available for a subset of patients and this might introduce some selection bias into our results when testosterone values are used; however, similar results were obtained when analyzing the whole patient cohort and also when testosterone values were not used in the analyses. Last, our study mostly consisted a homogenous population of young to middle-aged white/Caucasian men, thus our results might not be extrapolated to other populations with different race or ethnicity composition.

Our results show an association between SPL and male infertility. As SPL and AGD are both generated from similar pathways of sexual development and have each been correlated with infertility, SPL could provide similar information about testicular function and reproductive potential. Further studies should explore the possibility of an underlying link between AGD and SPL which may reveal its association with infertility and further the testicular dysgenesis theory.

Reporting Checklist: The authors have completed the STROBE reporting checklist. Available at http://dx.doi.org/10.21037/tau-20-788

Conflicts of Interest: All authors have completed the ICMJE uniform disclosure form (available at http://dx.doi.org/10.21037/tau-20-788). Dr. Brant reports personal fees from Boston Scientific, outside the submitted work; Dr. Hotaling reports other from streamdx, nanonc, andro360, inherent bioscience, other from turtle health, quara, outside the submitted work. Dr. Hotaling serves as an unpaid editorial board member of Translational Andrology and Urology from Aug 2019 to Jul 2021. The other authors have no conflicts of interest to declare.

Ethical Statement: The authors are accountable for all aspects of the work in ensuring that questions related to the accuracy or integrity of any part of the work are appropriately investigated and resolved. The study was approved by The University of Utah Institutional Review Board, IRB# 00098463. All procedures performed in this study were in accordance with the Declaration of Helsinki (as revised in 2013). Because of the retrospective nature of the research, the requirement for informed consent was waived.