Adult polycystic kidney disease (ADPKD) is one of the most common genetic diseases in the world. It is mostly caused by the mutation of gene PKD1 (chromosome 16p) and PKD2 (chromosome 4q). This disease becomes detectable at around the age of 40 and gradually progresses to end-stage renal disease about 10 years after initial diagnosis. Globally, the incidence rate of ADPKD is around 1–2.5% (1), and about 1.5 million patients in China are afflicted with this disease (2).

Polycystic kidney disease gradually induces a variety of symptoms. Cyst enlargement and compression of the surrounding organs leads to back pain, abdominal pain, and abdominal distension, while cyst bleeding results in repeated gross hematuria and anemia. If the cyst is infected, fever and backache can also occur (1). In addition, uremia patients with polycystic kidney disease suffer a higher incidence of renal tumor than do other patients (3). At present, the treatment of polycystic kidney includes gene treatment and symptomatic treatment. Gene therapy has been shown to be effective, but it needs to be applied in the early stage of the disease (1). However, about 20% of patients with polycystic kidney disease need to be resected due to various complications, while other patients also require kidney resection as preparation for renal transplantation (4).

We present the following article in accordance with the STROBE reporting checklist (available at http://dx.doi.org/10.21037/tau-20-1281).

The study was performed at the First Affiliated Hospital of Soochow University, Suzhou, China. Our research was a retrospective analysis approved by the medical ethics committee of the First Affiliated Hospital of Soochow University. Written informed consent was obtained from the patient. All procedures performed in this study involving human participants were in accordance with the Declaration of Helsinki (as revised in 2013). We collected the information of the patients between November 2015 and November 2018. The inclusion criteria were that the patient was diagnosed with ADPKD according to the clinical feature and family history. The exclusion criteria included uncontrolled hypertension, other diseases requiring surgery, abnormal blood coagulation and severe cardiopulmonary dysfunction. During this period, 15 person-time accepted preoperative embolization and retroperitoneal laparoscopic resection of polycystic kidney (laparoscopic group). Meanwhile, 10 person-time accepted open operation for resection of the polycystic kidney, and served as the control group. The laparoscopic group included eight males and five females. Two male patients underwent bilateral nephrectomy by stages, and were counted as four patients. The control group consisted of nine patients. One male patient underwent bilateral nephrectomy by stages and was counted as four patients. All patients underwent abdominal CT scan before operation to evaluate the size of the polycystic kidney and its relationship with the surrounding organs (Figure 1). One patient in the laparoscopic group accepted the operation as preparation for transplantation. The other patients in the laparoscopic group and control group were resected due to severe polycystic kidney symptoms that persisted after ineffective conservative treatment.

Figure 1 A computed tomography scan of an ADPKD patient before operation.

The patients in the laparoscopic group were treated with renal artery embolization in our interventional department 1 day before operation or on the day of operation. They were treated with analgesia and sedation before embolization. A gelatin sponge and spring coil were used for embolization (Figure 2). The patient was placed in a lateral decubitus position after general anesthesia. The surgeon and one assistant stood at the dorsal side of the patient. Another assistant stood at the ventral side of the patient. Monitors were located at the head of the operating table. The first hole (A point, Figure 3A) was built near axillary midline under the 12th costal margin. Forceps were used to separate into the posterior abdominal cavity. Then, the surgeon used a finger to free the cavity. A balloon was inserted into the cavity and injected with 500 mL of air. Under the guidance of fingers, a 12-mm trocar was punctured at the level of the iliac spine in the anterior axillary line to act as an observation hole (C point, Figure 3A). Next, carbon dioxide was injected into the retroperitoneal space through the observation hole. The first hole was the main operation port, and a 12-mm trocar was inserted. A 5 mm trocar was punctured between the main operation port and the observation hole (B point, Figure 3A). Another 12 mm trocar was punctured near the tip of the 11th rib in the anterior axillary line (D point, Figure 3A). The psoas major muscle was located, and the perirenal fascia was opened. If the space was too small, part of the cyst could be decorticated. If it was difficult to expose the pedicle, we cut through the middle of the kidney. We could then handle the renal pedicle. After lengthening the incision, the specimen was taken out in pieces, and the drainage tube was indwelled. 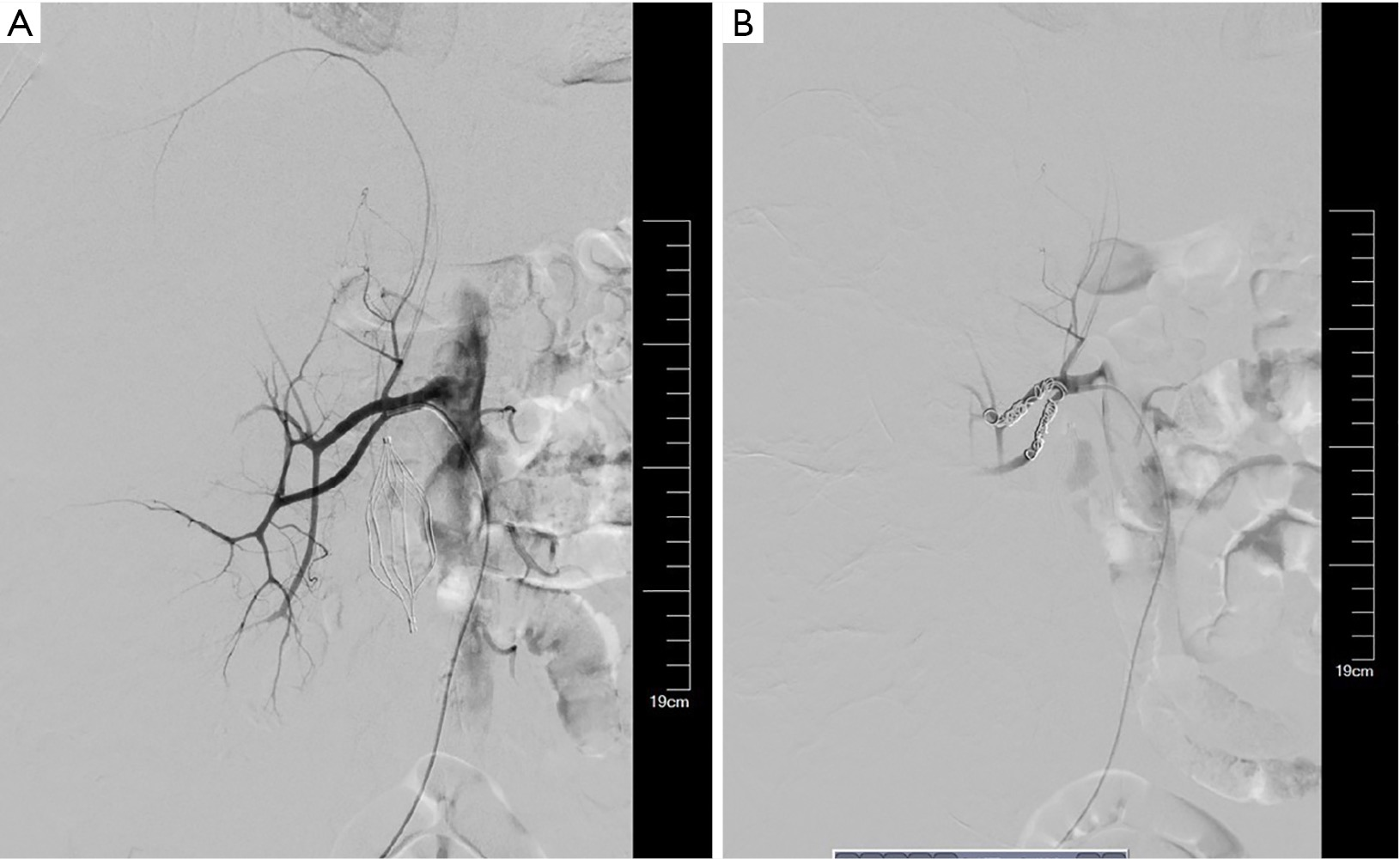 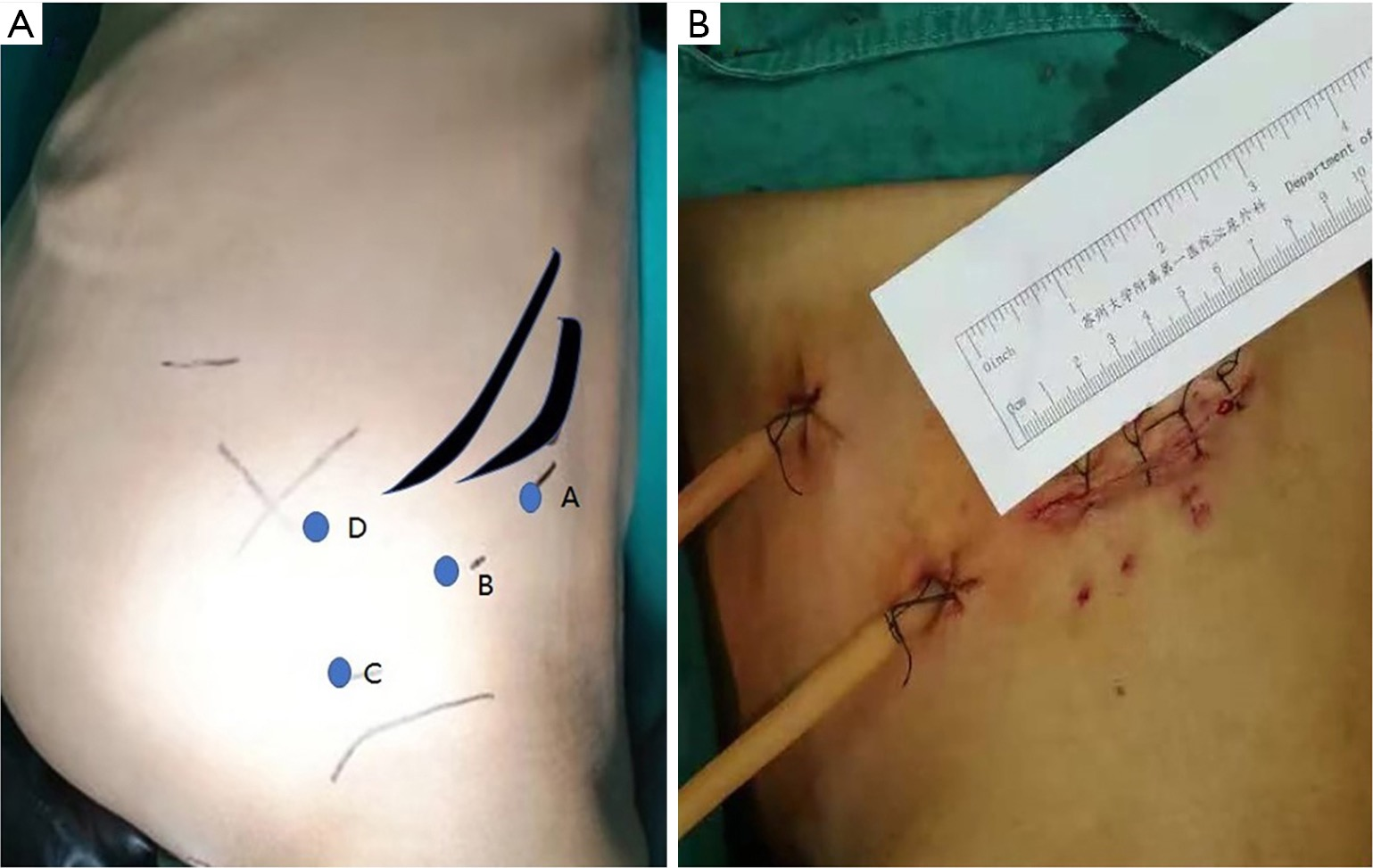 The patient was placed in a lateral decubitus position after general anesthesia. The skin, subcutaneous tissue, and muscular layer were incised layer by layer through a 12th-rib oblique incision, and the perirenal fascia was opened. The kidney was freed, and the renal pedicle was exposed. The renal pedicle and ureter were then ligated. At last, the kidney was completely removed. 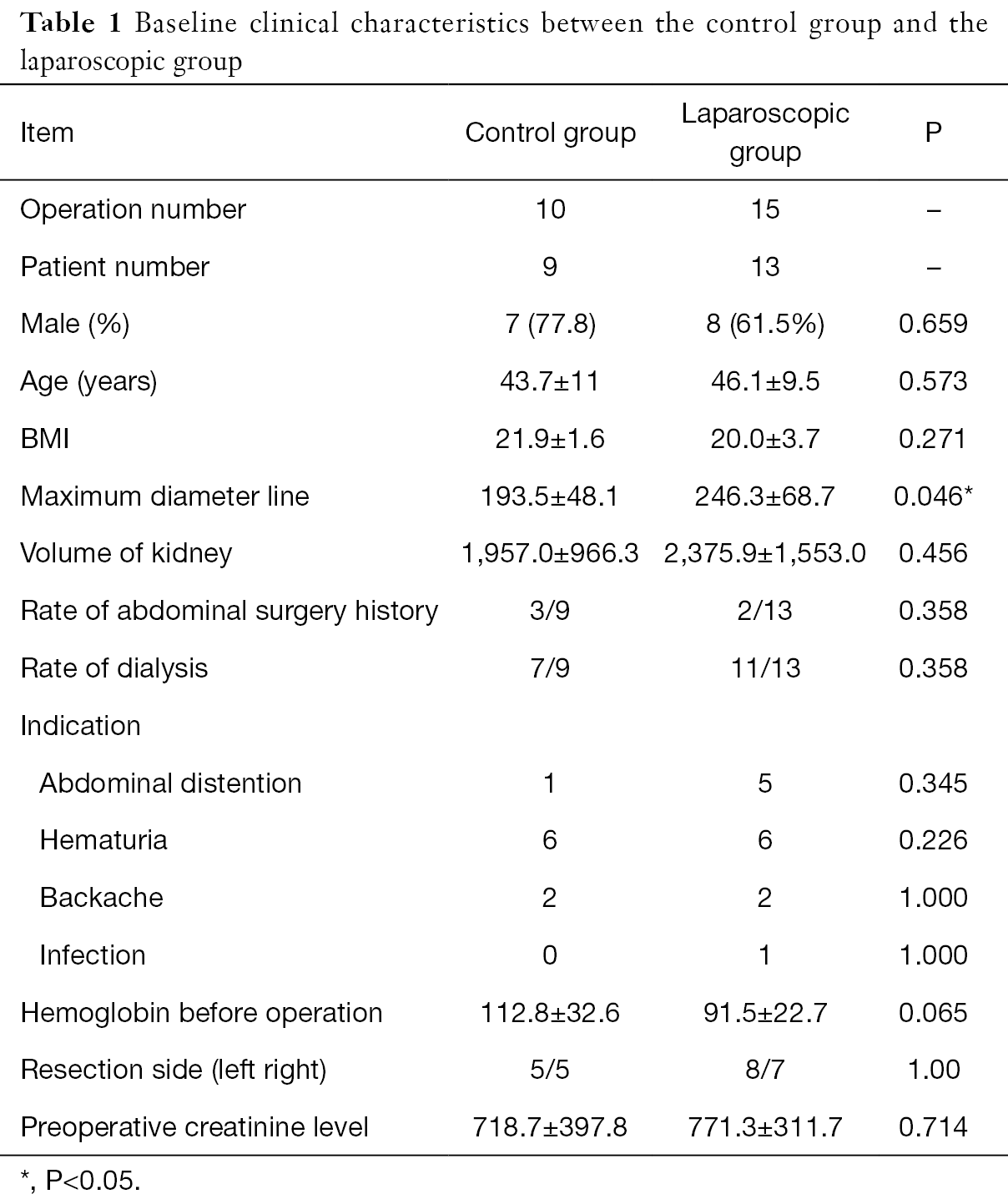 Comparison of complications after operation 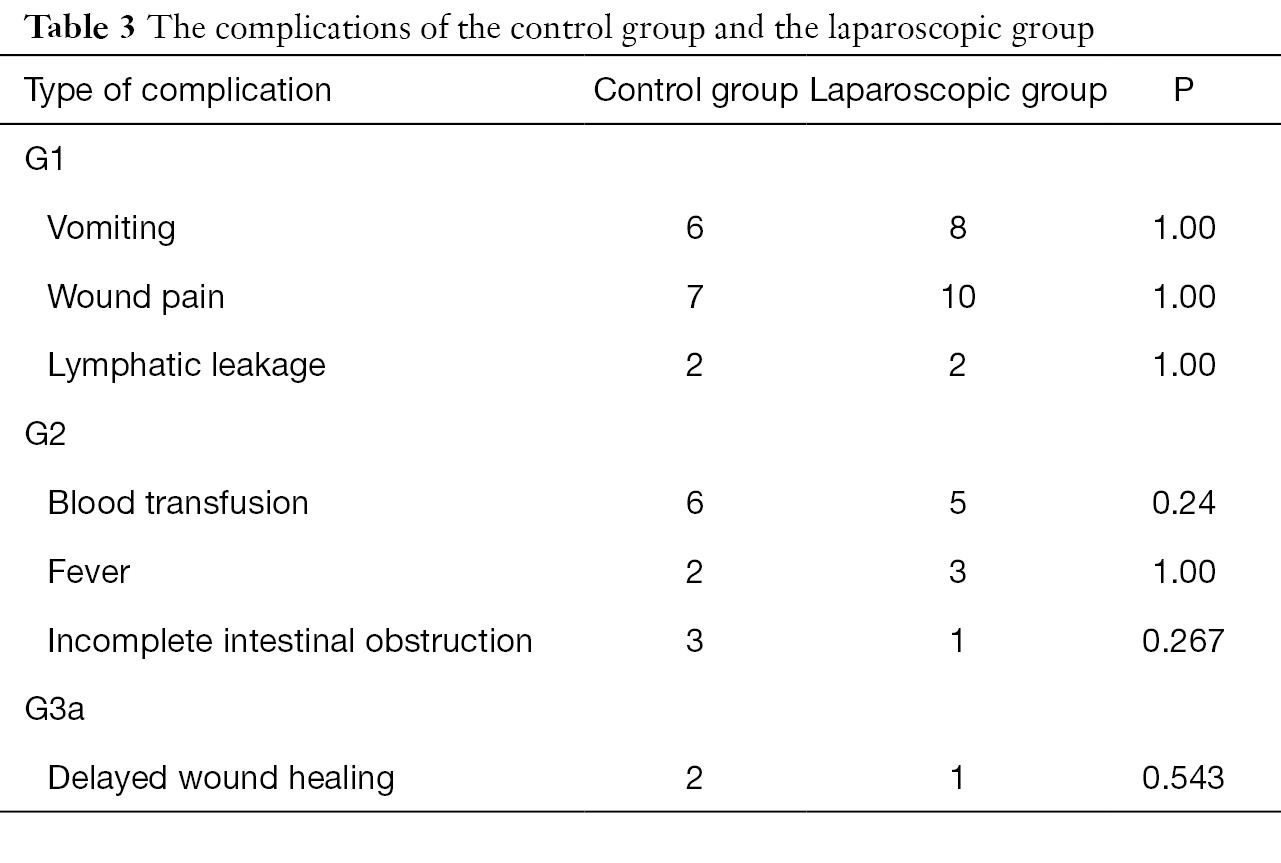 This study compared the two methods and found that the intraoperative blood loss in the laparoscopic group was significantly lower than that in the control group, while the rate of vascular complication was lower than that reported in another study (5). The advantage of our method is the pretreatment of the renal vessel. The embolization of the renal artery can reduce intraoperative bleeding, leaving the visual field of the operation clear and facilitating the exact management of the renal pedicle. The difficulty of retroperitoneal laparoscopic surgery for a polycystic kidney also includes the large volume of the polycystic kidney, the small retroperitoneal space, and the difficulty of exposing the renal pedicle. After renal artery embolization before operation, we can decorticate the renal cyst or even cut the kidney to reduce the volume of the kidney with a low risk of bleeding. Another advantage of this method is that it reduces the size of the large specimen, making it easier to remove, thus requiring a smaller incision.

In the past, the key point of laparoscopic nephrectomy has been the handling of the renal pedicle. Some experts advocated that the position of the observation port and main operation port should be close to the dorsal side (11). However, this can make managing the ventral side challenging, as it is easy to break the peritoneum. In our approach, there is no concern over bleeding due to the embolization of the renal artery. We can select the trocar position on the ventral side. When managing the renal pedicle, we can first remove the renal cyst or even part of the kidney, which conveniently exposes the renal vessels, and we can also more easily manage the ventral side. Compared with the transabdominal approach, the retroperitoneal approach has less impact on abdominal organs. The patients’ bowel function could recover faster after operation and the patients had lower probability of bowel related complications.

The present study compared the incidence of postoperative complications between a laparoscopic and open surgery (control) group. There was no significant difference in the probability of the various postoperative complications between the two groups. The incidence of postoperative wound pain was lower in the laparoscopic group by virtue of the small incision. The drainage tube extraction time and ambulation time of patients in the postoperative laparoscopic group were both longer than those of the open surgery group, although the difference was not statistically significant. These longer durations observed may be due to the small number of cases studied.

Our study showed that retroperitoneal laparoscopic technique assisted by arterial embolization is a good method to resect polycystic kidney. It has the advantages of less bleeding and faster recovery. However, it still entails a few disadvantages, including a long operation time, along with high cost and skill requirements for the operator. These drawbacks can be overcome through an improvement of the medical insurance system and the further development of medical technology. Ultimately, retroperitoneal laparoscopy combined with interventional embolization is an effective way to resect the polycystic kidney.

Reporting Checklist: The authors have completed the STROBE reporting checklist. Available at http://dx.doi.org/10.21037/tau-20-1281

Conflicts of Interest: All authors have completed the ICMJE uniform disclosure form (available at http://dx.doi.org/10.21037/tau-20-1281). The authors have no conflicts of interest to declare.

Ethical Statement: The authors are accountable for all aspects of the work in ensuring that questions related to the accuracy or integrity of any part of the work are appropriately investigated and resolved. The research was a retrospective analysis approved by the medical ethics committee of the First Affiliated Hospital of Soochow University. Written informed consent was obtained from the patient. All procedures performed in this study involving human participants were in accordance with the Declaration of Helsinki (as revised in 2013).