Exploration of the association between serum uric acid and testosterone in adult males: NHANES 2011–2016

Testosterone, the principal male sex hormone mainly secreted by Leydig cells in the testes, is responsible for the maturation of male sexual organs and development of secondary sexual characteristics. Hypogonadism is a clinical and biochemical syndrome that can occur across all ages and the diagnosis of hypogonadism is based on relevant clinical symptoms and low testosterone (9). Testosterone deficiency has become an increasingly concerning and controversial topic around the world, affecting approximately 7% of men in their 50s with an increasing prevalence with age (10). Testosterone is also an important hormone in the pathophysiology of metabolic diseases, and previous studies have shown the association between testosterone and obesity, metabolic syndrome and type 2 diabetes mellitus (T2DM). Hypogonadism is an important comorbidity of obesity (11,12). A nationwide study involves 2,615 participants have found that approximately 52.4% of obese men had low testosterone levels (13). Low testosterone levels are highly prevalent in men with metabolic syndrome and insulin resistance (14,15). Studies have found long-term testosterone replacement therapy can produce significant decrease in body mass index (BMI), improvement in insulin resistance and glycemic control (16,17).

The National Health and Nutrition Examination Survey (28), which was conducted by the Centers for Disease Control and Prevention of America every 2 years, is a cross-sectional survey that aims to assess the health and nutritional status of the U.S. population. The survey consists of an interview conducted in the home, followed by a standardized health examination in specially equipped mobile examination centers, which includes a physical examination administered by trained medical personnel as well as laboratory tests (29). The study was conducted in accordance with the Declaration of Helsinki (as revised in 2013) (30). Written informed consent was obtained from all participants prior to completing the NHANES, and all data was de-identified by the National Center for Health Statistics before being made publicly available. 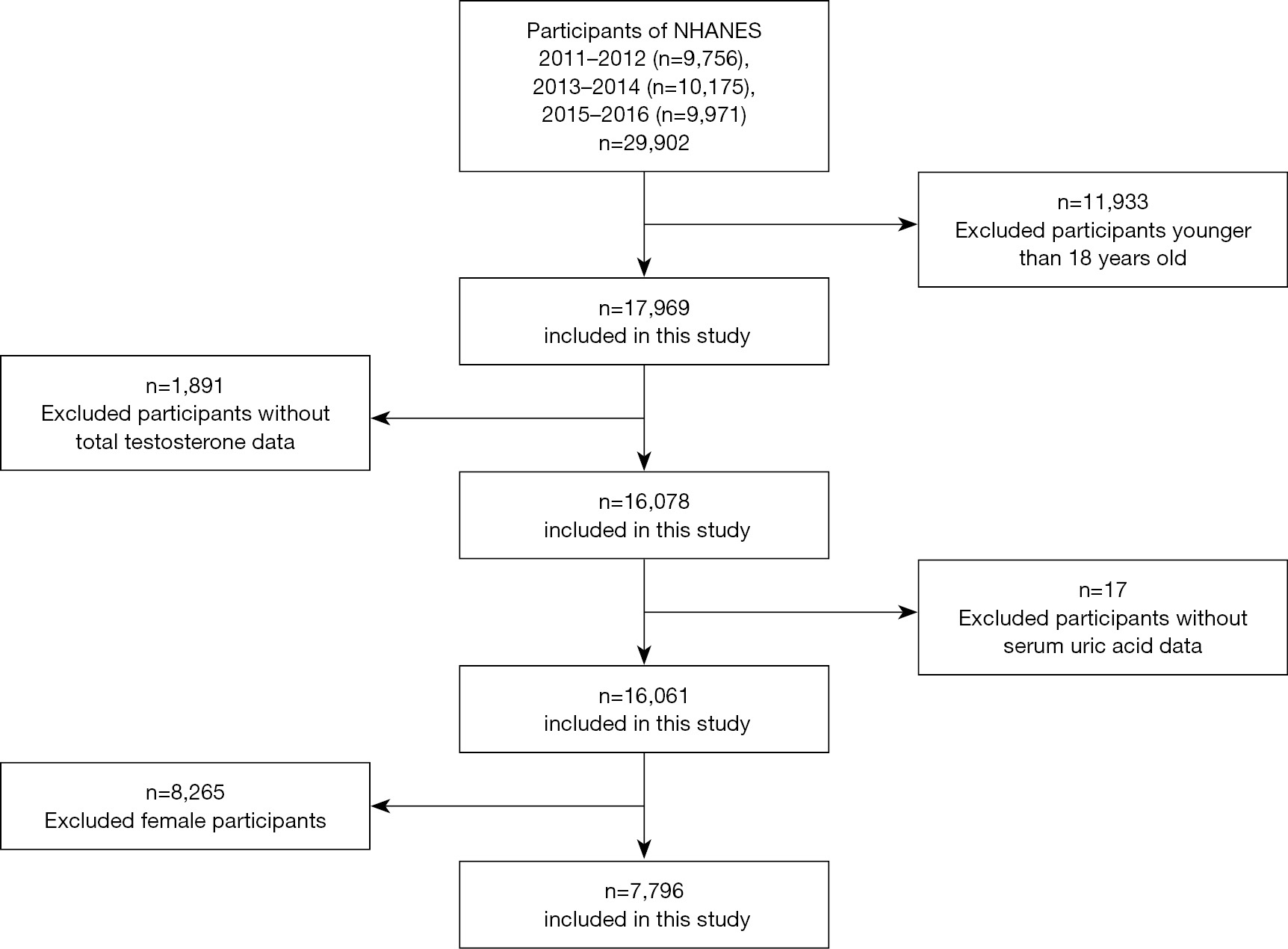 Figure 1 Flow chart of the screening process for the selection of eligible participants.

Potential confounding factors in this study include age, race (Mexican American, Other Hispanic, Non-Hispanic White, Non-Hispanic Black, and Other race), BMI (normal: below 25 kg/m2; overweight: between 25 and <30 kg/m2; obesity: ≥30 kg/m2) (35), total moderate-to-vigorous minutes of physical activity per week (MVPA, number of days do moderate-to-vigorous physical activities per week × minutes of moderate-to-vigorous physical activities on a typical day) was log-transformed for regression analysis, alanine aminotransferase (ALT) and aspartate aminotransferase (AST), anemia (defined as hemoglobin <13 g/dL) (36), the homeostasis model assessment-insulin resistance index (HOMA-IR) [fasting blood glucose (mmol/L) × fasting insulin (mIU/L)/22.5], a widely used insulin resistance marker (37). C-reactive protein (CRP) (an inflammatory biomarker which was associated with low serum testosterone and higher prevalence of metabolic syndrome) (38,39), sex hormone binding globulin (SHBG), estradiol. A history of hypertension or diabetes was defined as a self-reported physician diagnosis of hypertension or diabetes. Based on prior studies and theoretical considerations (40-43), above covariates were selected in this study.

All statistical analyses were conducted with SPSS 24 and STATA version 14. To account for the complex sampling design and ensure nationally representative estimates, all analyses were adjusted for survey design and weighting variables. The new sample weight (the original 2-year sample weight divided by 3) was constructed according to the analytical guidelines of the NHANES (44). The normality of continuous variables was tested with the Kolmogorov-Smirnov normality test. Normally distributed variables are described as the mean ± standard deviation, and nonnormally distributed continuous variables are described as the median (interquartile range). The median values among different SUA and testosterone groups were compared with the Mann-Whitney U test and Kruskal-Wallis test. The chi-square test was adopted to compare the percentages of categorical variables among different SUA and testosterone groups. The Bonferroni test was used for the intergroup comparison. We evaluate the correlation between each independent variable and testosterone by using univariate and multivariate linear regression models. Because the distribution of serum testosterone was skewed right, testosterone was log-transformed in the regression analysis. With serum testosterone as the dependent variable, regression coefficients, standard errors and P values were determined. Due to the limitation of data, serum estradiol, SHBG and CRP were only included in the 2015–2016 cycle linear regression analysis (Table S2). Because the concentration of serum testosterone was log-transformed, the percent differences of serum testosterone was calculated by the equation: percent change = (eβ-1)×100%. We performed a sensitivity analysis by excluding participants with serum testosterone <50 or >1,000 ng/dL or outliers (defined as more than 3 standard deviations from the mean). In addition, stratified analyses by age (group 1: 18≤ age <45, group 2: 45≤ age <65, group 3: age ≥65), BMI (normal, overweight and obesity), history of hypertension and diabetes were performed to examine the association between SUA and log-transformed testosterone. We analyzed the multicollinearity of the multivariate linear regression. The variance inflation factor (VIF) was less than 10, so there was no multicollinearity. A two-sided P<0.05 was considered statistically significant. 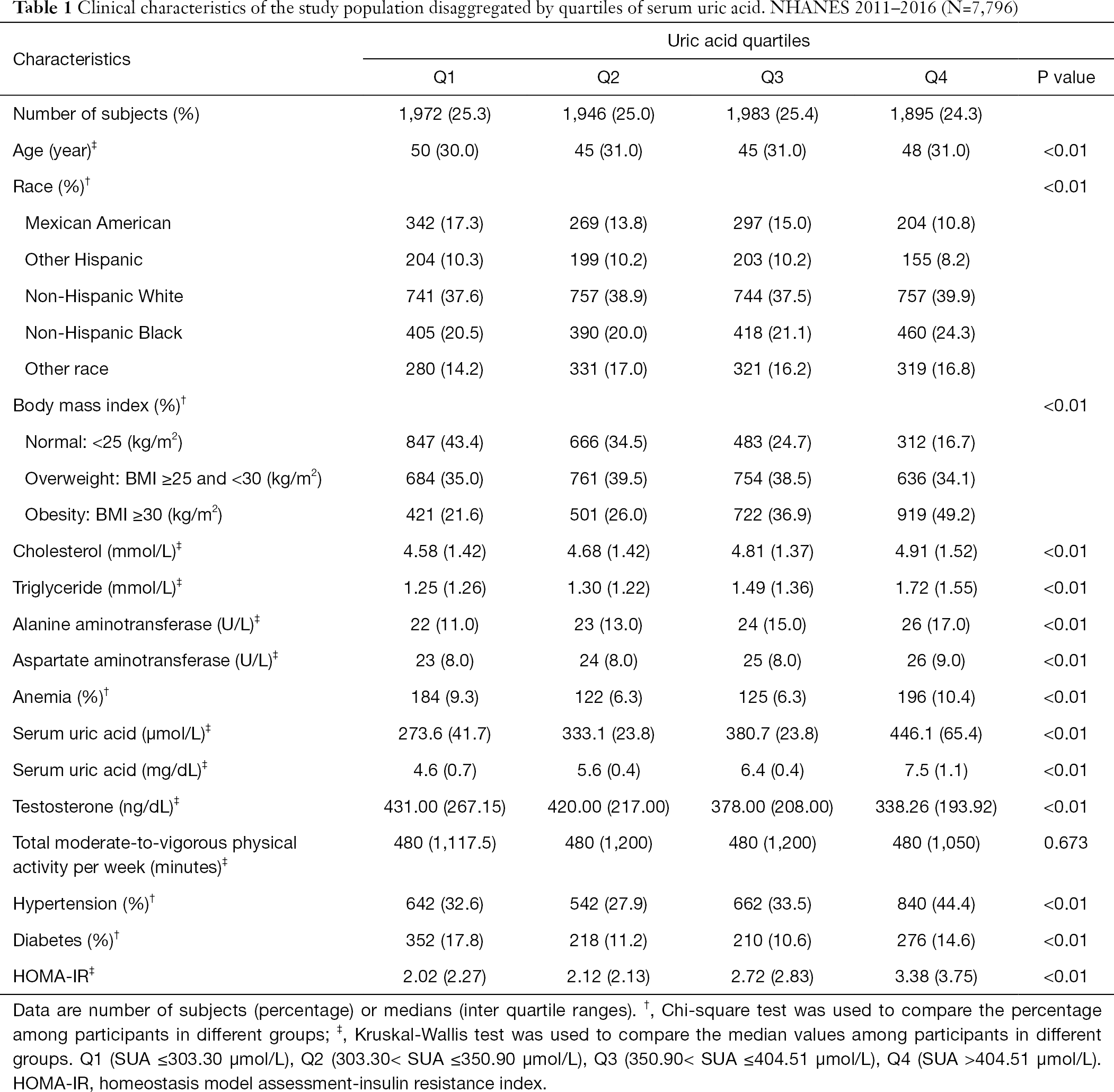 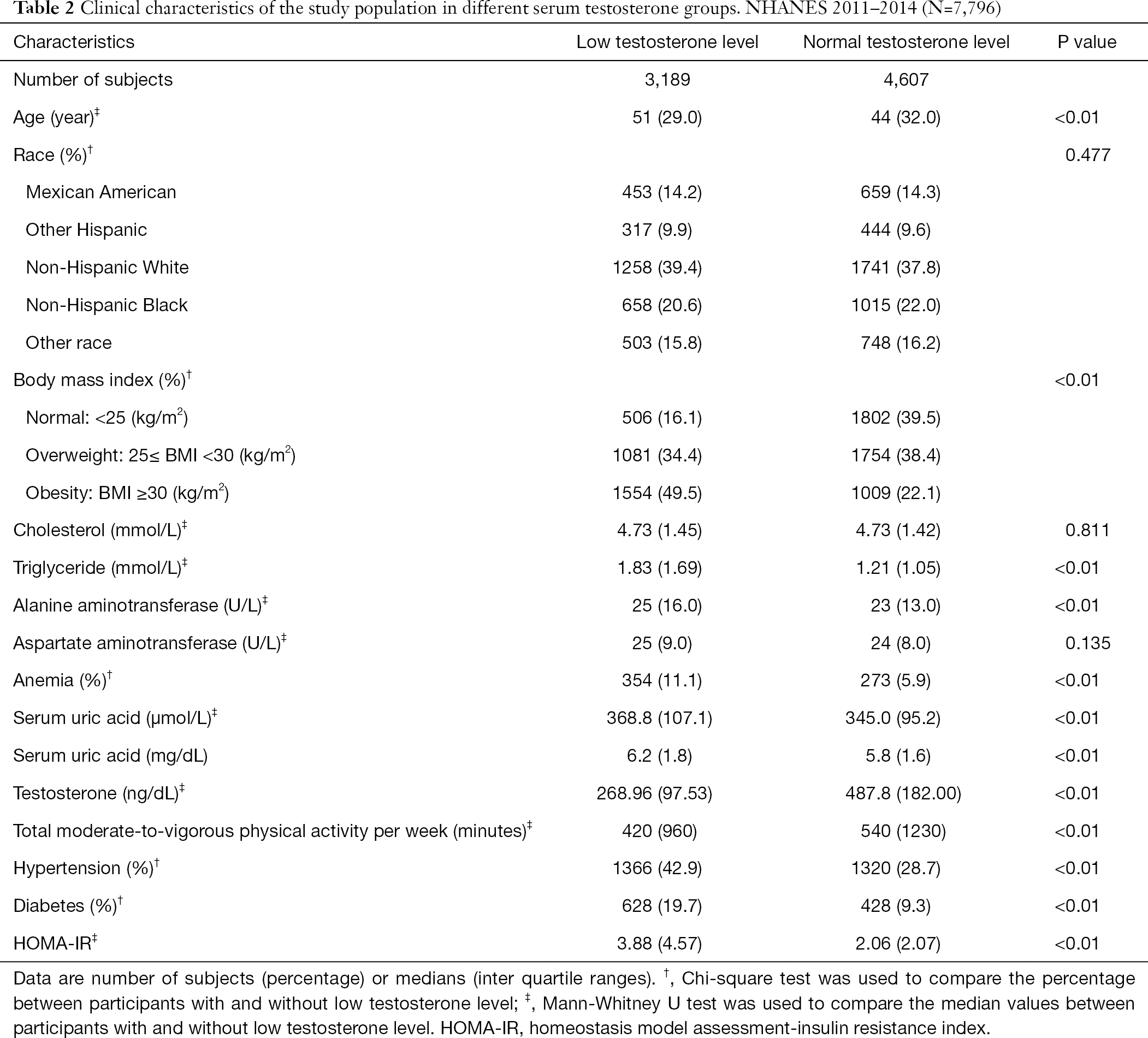 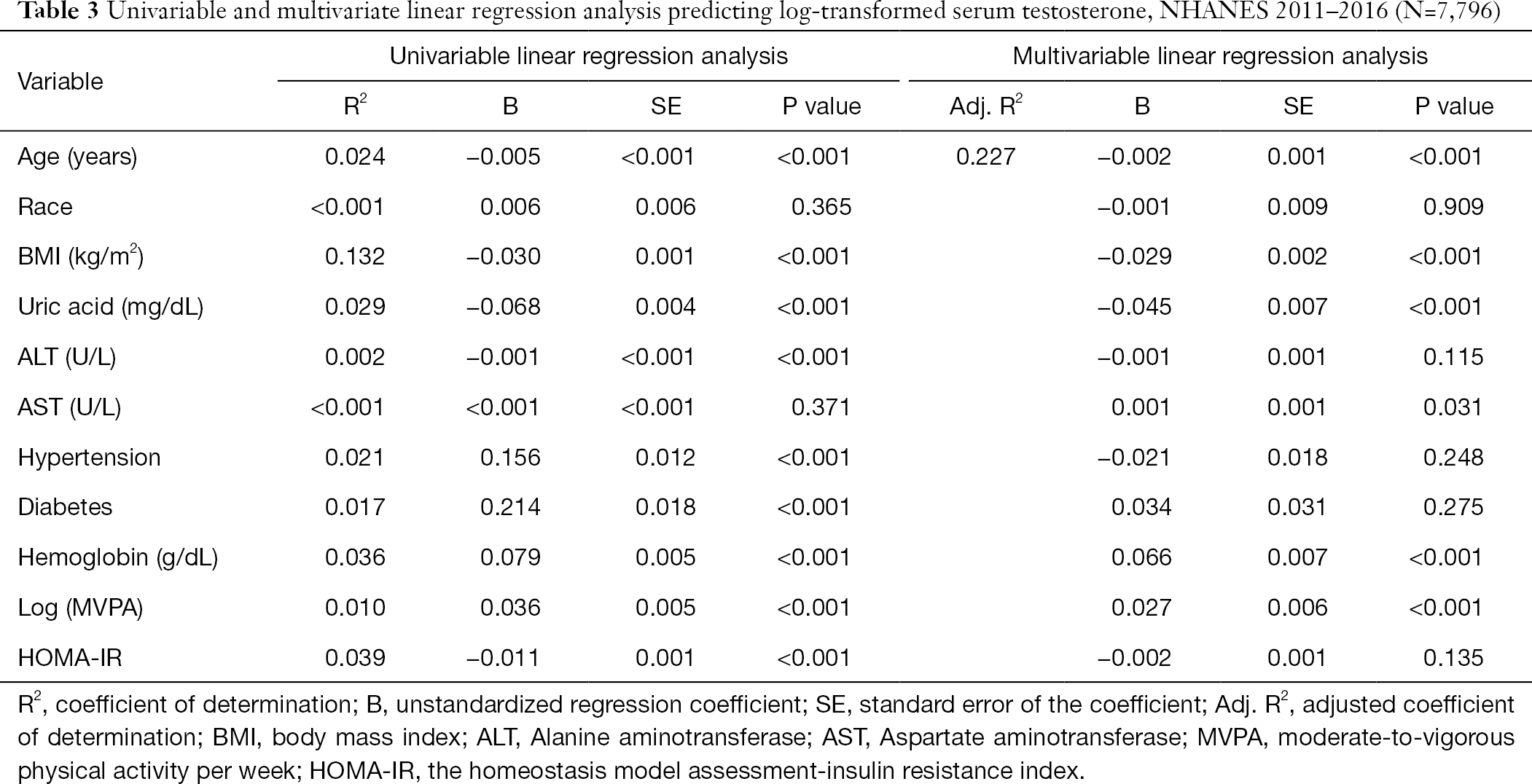 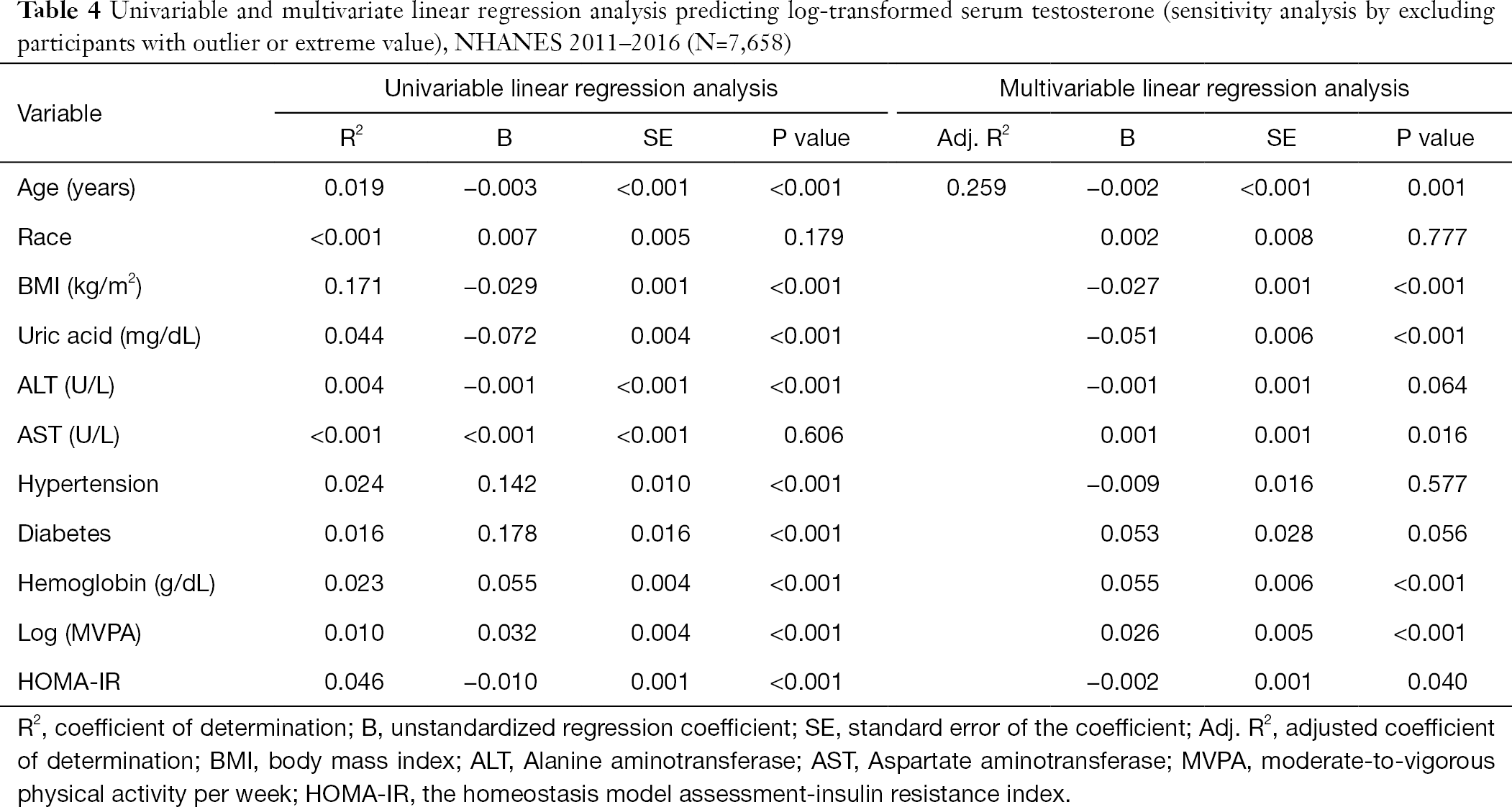 The results of stratified analyses by age, BMI, history of hypertension and diabetes were shown in Table 5. In stratified analyses by BMI and history of hypertension, the negative association between SUA and serum testosterone was still significant among different groups, but this negative correlation was not significant in man with diabetes or aged 65 and over. We then tested age and diabetes as an interaction with SUA in the model that adjusted for the same covariates. A significant interaction was noted between age (P<0.05), history of diabetes (P<0.05) and SUA. 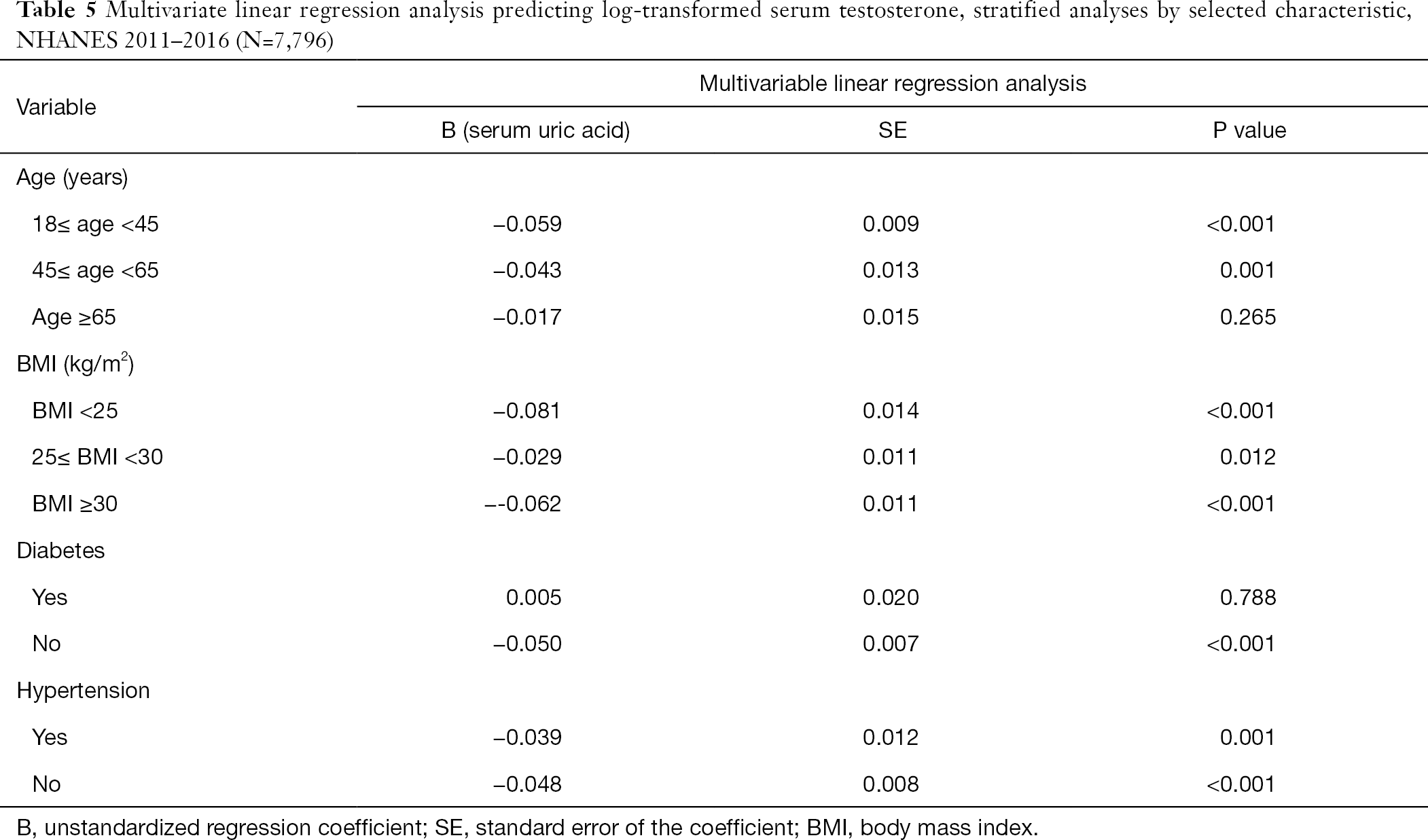 Table S2 represented the results of linear regression analysis with CRP, estradiol and SHBG were additionally adjusted. Due to the limitation of data, 2,590 participants from 2015–2016 cycle was involved. Our multiple regression model accounts for 66.2% (Adj. R2=0.662) of testosterone variation. In multivariate linear regression, we found that increasing age, SUA, BMI and HOMA-IR were associated with declining serum testosterone while increasing hemoglobin, estradiol and SHBG were associated with elevated testosterone levels.

In this study, we combined data from the NHANES 2011–2012, 2013–2014 and 2015–2016, and a total of 7,796 men aged 18 years or older were included. In both univariable and multivariate linear regression analysis, our study indicated that increased SUA might be negatively correlated with serum testosterone. The negative association of SUA with testosterone was still significant after excluding participants with outlier or extreme value. In stratified analyses, above association was not significant in men with diabetes or aged 65 and over.

Our results were consistent with some previous studies (18-21,23). A cross-sectional study conducted by Chao (18) indicated a significant negative correlation between SUA and testosterone levels in T2DM males. A study conducted by Gambineri, which involved 30 obese male subjects, was designed to investigate the impact of obstructive sleep apnea syndrome on testosterone levels and the main metabolic parameters and found that testosterone values were negatively associated with SUA (20). A prospective cohort study involving 51 men aimed at investigating whether testosterone treatment had an impact on cardiovascular risk factors in patients with T2DM and late-onset hypogonadism (LOH) found that testosterone-metformin combination therapy could help reduce SUA compared with treatment by metformin alone (21). In another prospective cohort of 31 men with LOH, 16 participants received intramuscular testosterone enanthate (100 mg weekly). After 4 months of therapy, increased testosterone levels and decreased UA levels were identified in patients treated with testosterone compared with the control group (23). However, there is also some controversial evidence (24,26,27,50). A prospective study spanning two years including 47 female-to-male transsexuals documented an ensuing significant increase in SUA and a decrease in FEUA (fraction excretion of uric acid) after cross-sex hormone treatment (24). Studies conducted by Marinello and Rosen pointed out that testicular endocrine function was normal in patients with gout, and no significant difference in serum testosterone levels was found between male patients with gout or asymptomatic hyperuricemia men and controls (26,27). Borbélyová found that gonadectomy and long-term hypogonadism in male middle-aged rats had no significant effect on uric acid (50). Possible explanations of the differences in the above research results included the following: (I) previous studies on the relationship between SUA and testosterone included a relatively small sample size; (II) the inclusion criteria of the above research were different, so there were differences in the research objects; (III) there were differences in the research methods, statistical analysis and adjusted covariates.

In conclusion, our study suggests that SUA might be negatively associated with serum testosterone levels in the general U.S. adult males. We hope that it can provide some information for the treatment of hyperuricemia and testosterone deficiency. The association we investigated in this study is biologically plausible, and further large-scale prospective studies are required to confirm the causal relationship between SUA and testosterone.

We acknowledge the support from the Capital Medical Development Research Fund. We acknowledge the staff at the National Center for Health Statistics at the CDC, who design, collect, and administer the NHANES data and release the data for public use. We are grateful to all study participants for their cooperation.

Funding: This work was supported by a grant from the Capital Medical Development Research Fund (2018-1-4012).

Reporting Checklist: The authors have completed the STROBE reporting checklist. Available at http://dx.doi.org/10.21037/tau-20-1114

Conflicts of Interest: All authors have completed the ICMJE uniform disclosure form (available at http://dx.doi.org/10.21037/tau-20-1114). The authors have no conflicts of interest to declare.

Ethical Statement: The authors are accountable for all aspects of the work in ensuring that questions related to the accuracy or integrity of any part of the work are appropriately investigated and resolved. The study was conducted in accordance with the Declaration of Helsinki (as revised in 2013). Written informed consent was obtained from all participants prior to completing the NHANES, and all data was de-identified by the NCHS before being made publicly available.