Inflammatory bowel disease (IBD), comprising ulcerative colitis (UC) and Crohn’s disease (CD), is characterized by chronic gastrointestinal tract inflammation. In the past decades, a significantly increased incidence of IBD has been observed worldwide, especially in eastern countries (1). IBD has been a great health burden to the society for its high morbidity and tight association with gastrointestinal malignancy (2-4), as well as numerous extraintestinal malignancies (5,6).

Though mechanism underlying IBD and oncogenesis has not been clearly elucidated, it was reported that inflammation not only serves as host`s response to malignant tumor but also elicit carcinogenesis (7,8). Moreover, immunosuppressant medications, which are widely used for IBD treatment, are believed to be responsible for elevated risk of cancers like non-Hodgkin lymphoma, acute myeloid leukemia, non-melanoma skin cancers and urinary tract cancers (9-12). From these knowledges, a concept about the interplay between IBD and malignancy could be established, which depicts the inflammation induced immune dysregulation and immunosuppressant medications use as key factors in IBD related malignancies. However, this indirect evidence-based hypothesis may not apply to all kinds of malignant tumors, especially extraintestinal tumors. Direct evidence from studies evaluating the association between certain malignancy and IBD could be of great value in prognosis predicting and providing guidance for cancer surveillance. To our knowledge, no meta-analysis has been performed to evaluating the risk of bladder cancer (BCa) or male genital cancer (MGCa) in IBD patients. A recent study reported an increased risk of prostate cancer (PCa) in IBD patients (13). With the aim of evaluating the risk of lower urinary tract cancers including PCa, BCa and MGCa in IBD patients, we performed this meta-analysis. We presented the following article in accordance with the PRISMA reporting checklist (available at http://dx.doi.org/10.21037/tau-20-1020).

We conducted this meta-analysis according to the guideline of Preferred Reporting Items for Systematic Reviews and Meta-Analyses (PRISMA) Statement (14). Electronic databases including PubMed, the Cochrane Library, Embase and Web of Science was initially searched from inception to April 2020 with no language limitation. We used the following Medical Subject Heading (MeSH) terms and related synonyms: “Inflammatory Bowel Diseases”, “Urinary Bladder Neoplasms”, “Prostatic Neoplasms”, and “Genital Neoplasms, Male”. The complete search strategy was described in the Supplementary file. We scrutinized all potentially eligible studies, regardless of the primary outcomes or language. Besides, references from related articles were also retrieved manually to ensure a comprehensive search.

Studies were regarded as eligible if they satisfied the following inclusion criteria: (I) patients developed with BCa, PCa, or MGCa after being diagnosed with IBD, irrespective of UC or CD; (II) standardized incidence ratio (SIR) or relative risk (RR) with 95% confidence intervals (CIs) were used to evaluate the association between IBD and risk of lower urinary tract tumors (BCa, PCa or MGCa); (III) population-based cohort studies or case-control studies; (IV) the follow-up of included studies should be more than 1 year. If the study population overlapped, we used the most recently published or most informative literature. Exclusion criteria were as follows: (I) any study which did not meet the inclusion criteria; (II) meeting abstracts, review or meta-analysis; (III) data not available. Figure 1 sketches the PRISMA flow diagram of this meta-analysis. 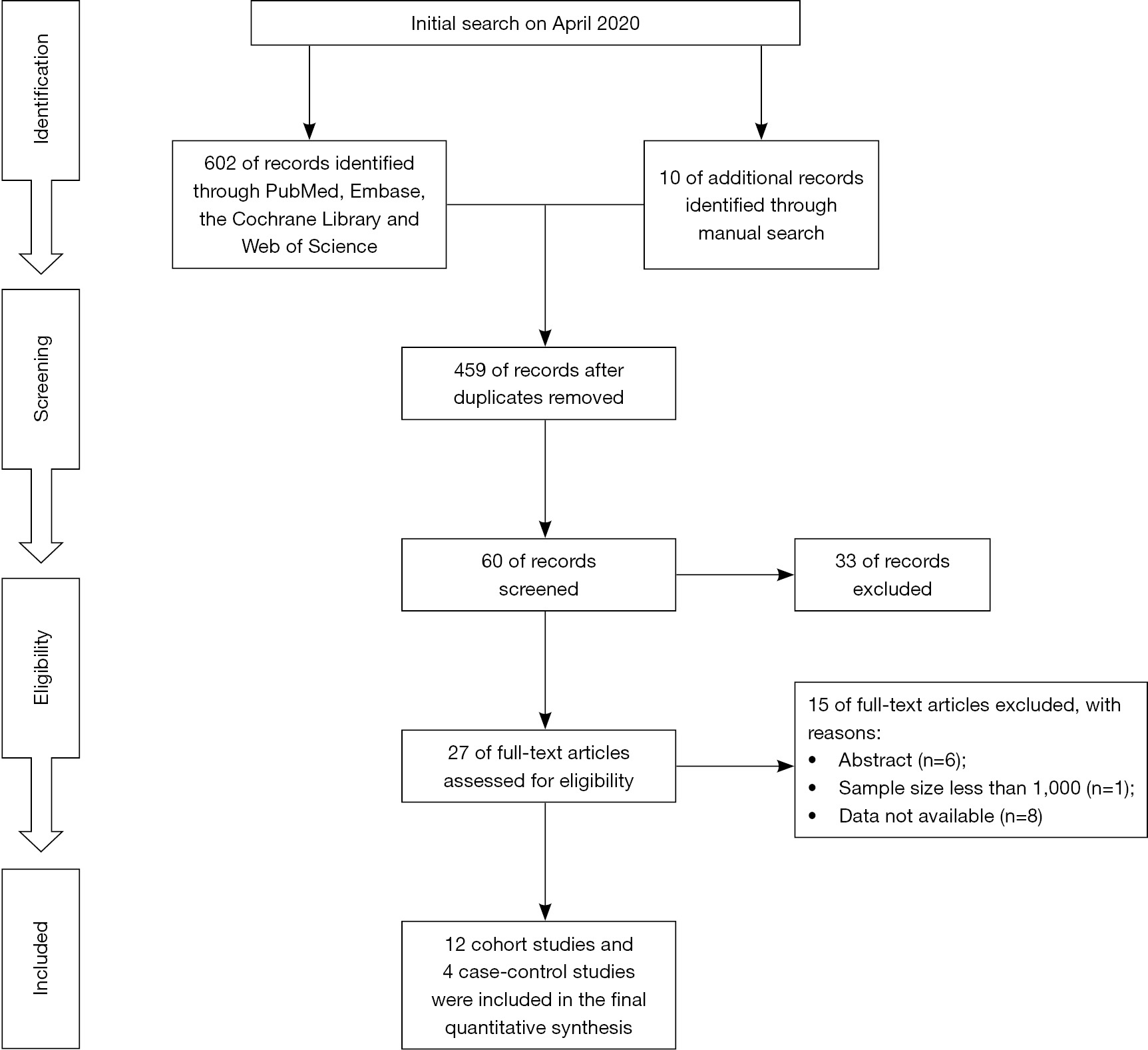 Figure 1 The PRISMA flowchart showing the study selection process of this meta-analysis.

Two authors independently evaluated the methodological bias of included studies through the Newcastle-Ottawa Scale (NOS) (15). The NOS used a “star system” to assess the quality of study from three perspectives: the selection of the studies, the comparability of studies, and the assessment of outcome. Whenever seven or more of nine stars were received, the study was considered as high quality. Moreover, two reviewers independently rated the level of evidence of the included articles using the Oxford Centre for Evidence-Based Medicine criteria (16); This scale graded studies from strongest (level 1) to weakest (level 5) strength of evidence on the basis of study design and data quality.

Data were expressed as SIR or RR with 95% CIs. The Q and I2 statistics were calculated to estimate the heterogeneity among studies. If P>0.1 or I2≤50%, we used the fixed-effect models. Otherwise, a random-effect model was used. Besides, we reported the pooled analysis according to the cancer types and IBD subtype. Funnel plots were used to assess the possibility of publication bias, and the asymmetry of funnel plots was evaluated by Egger’s test and Begg’s test; We considered significant publication bias as a p value less than 0.1. Furthermore, we conducted sensitivity analyses to evaluate the robustness of the pooled results. Statistical significance was set at P<0.05. This meta-analysis was completed by STATA version 14.2 (StataCorp LP, College Station, TX, USA).

Six hundred and twelve of records were initially identified through PubMed, Embase, the Cochrane Library and Web of Science from inception to April 2020, resulting 12 cohort studies (12,17-27) and 4 case-control (28-31) studies included in the final analysis based on title, abstract, and full text (Figure 1). A total of 511,259 participants were included in this population-based study. In the cohort studies, 10 of 12 studies with 174,094 patients reported available data for PCa, 9 of 12 studies with 136,502 patients were available for BCa and 6 of 12 studies were available for MGCa. In the case-control studies, a total of 4 studies containing 335,167 participants reported related outcomes of PCa, and 2 of 4 studies with 285,534 participants were available for BCa. Table 1 details the main characteristics of included studies in this study. 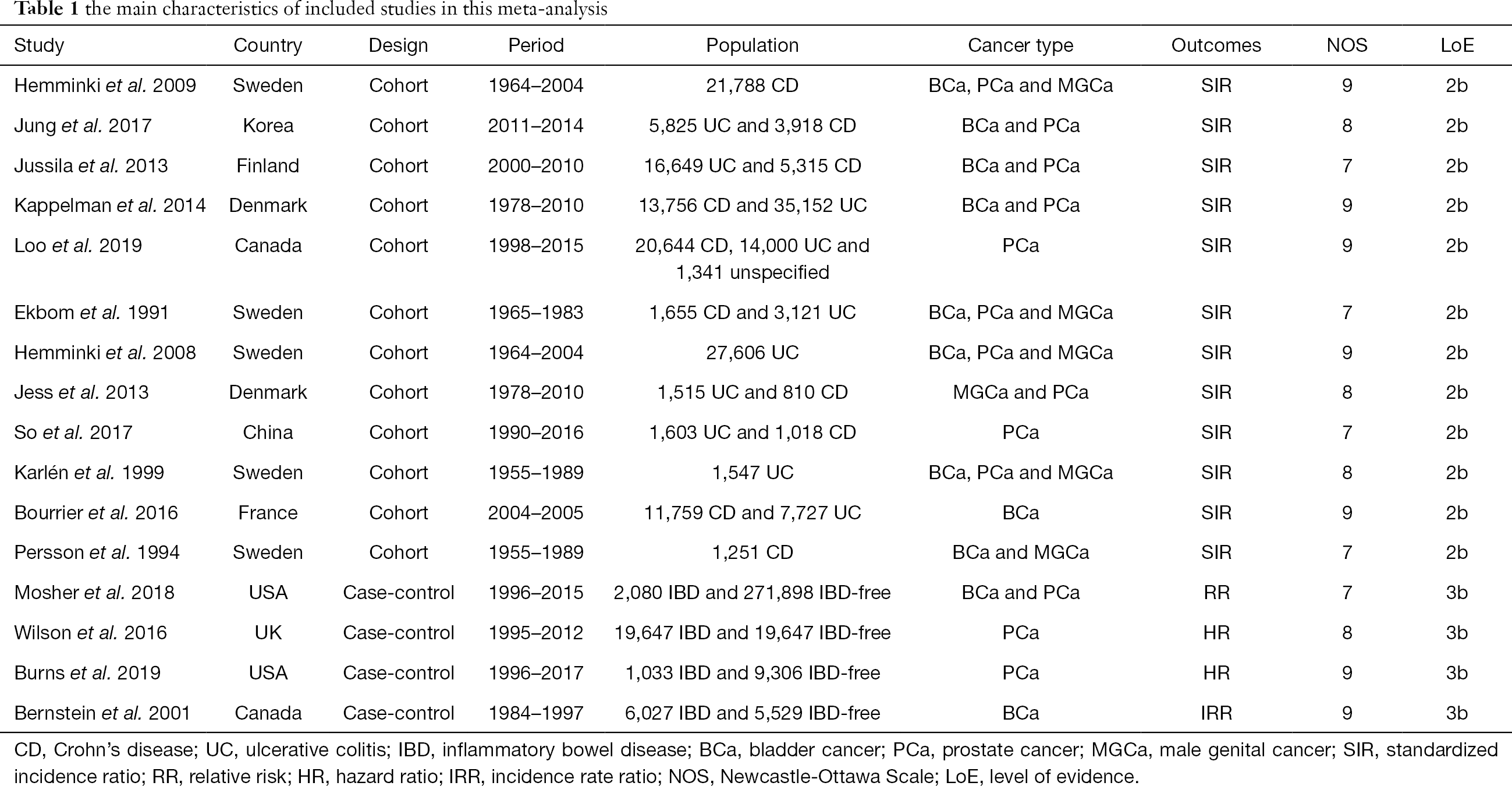 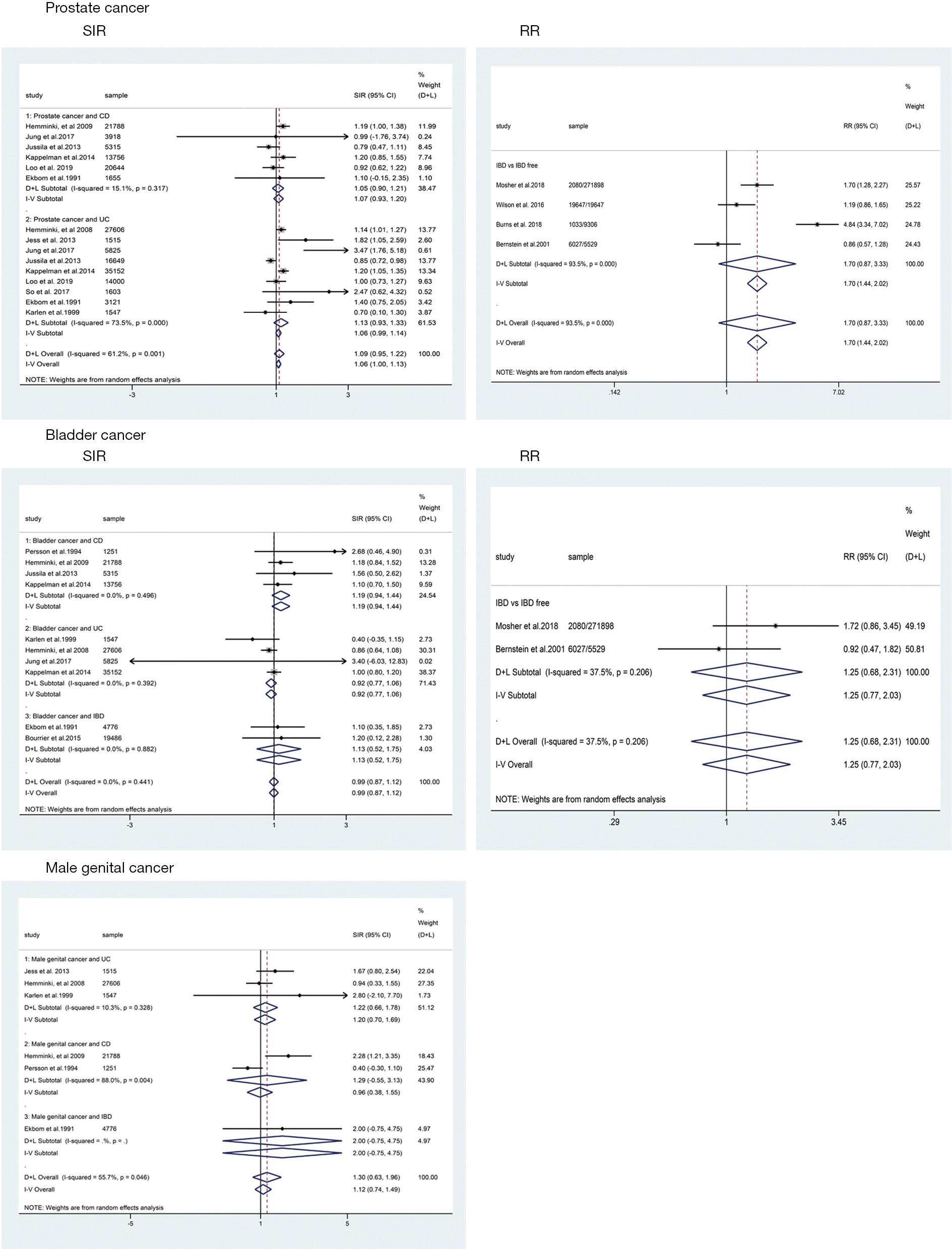 No significant asymmetry was observed in the present study in terms of PCa and BCa through the corresponding funnel plots (Figure 4). The P values of Egger’s test for PCa, BCa and MGCa were 0.234, 0.194 and 0.276, respectively. Furthermore, sensitivity analysis revealed that there was no significant change of the pooled results for all outcomes observed through excluding each study from the meta-analysis sequentially (Figure 4). 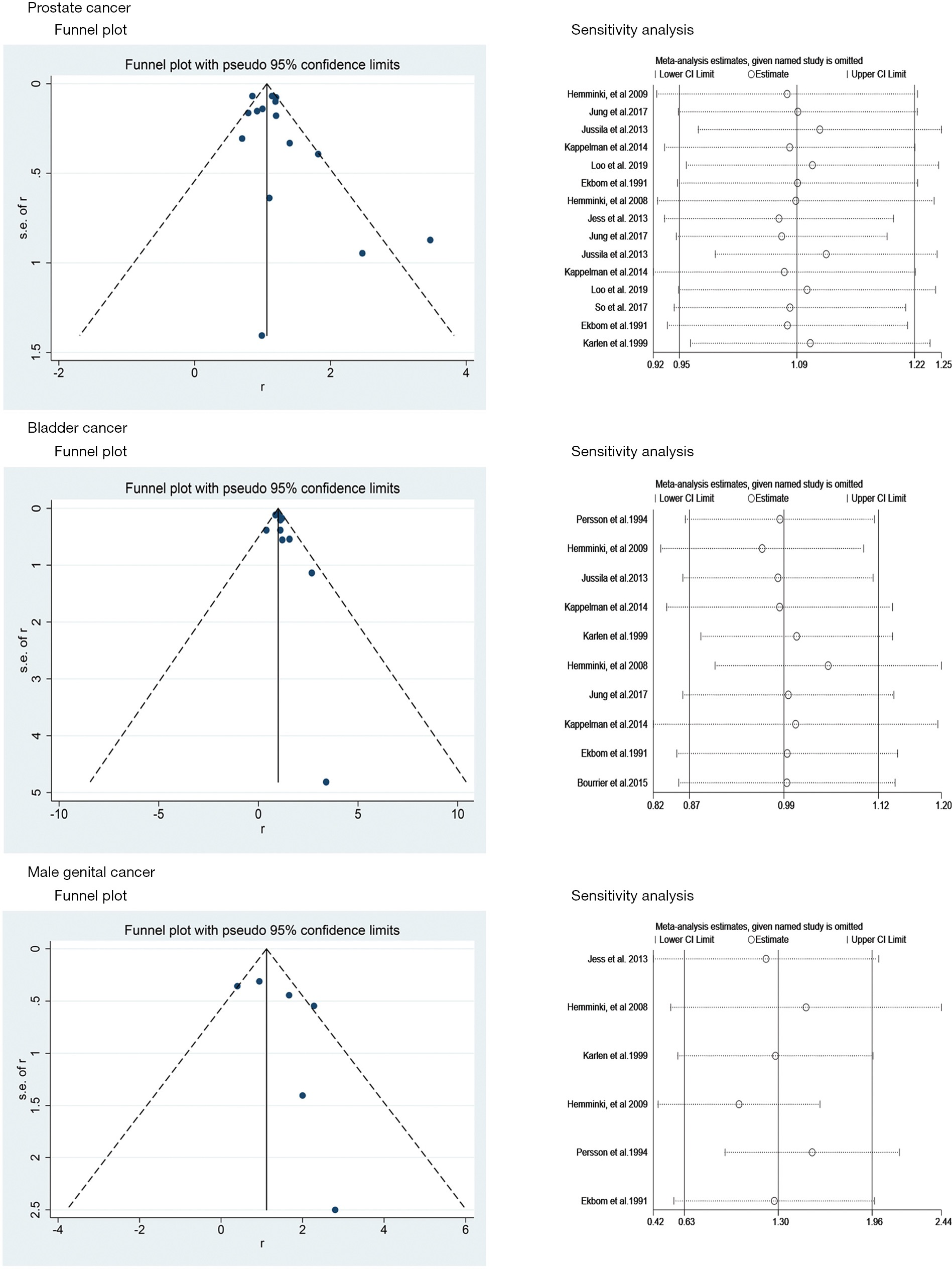 In this study, we found there was no significant difference between IBD patients and background population regarding the risk of PCa, BCa or MGCa. However, a trend toward higher risk of PCa was suggested in patients with IBD, CD, and UC. For BCa, CD patients seemed to have a higher risk. As was previously reported, lower incidence rate of PCa was observed in East Asian countries when compared with that in other regions (32), we performed a subgroup analysis to evaluate the risk of IBD related PCa in East Asian countries. Different from the general results above, a significantly increased risk of PCa in East Asian IBD patients was detected (SIR: 2.62; 95% CI: 1.38–3.87; I2=13.6%; Figure 3), especially for UC patients (SIR: 3.01; 95% CI: 1.75–4.27; I2=0.0%; Figure 3).

Great improvement has been made in understanding the interaction between inflammation and carcinogenesis. Current knowledge about the mechanism underlying inflammation related carcinogenesis mainly depicts inflammation induced epigenetic alterations and DNA damage as the key factors in carcinogenesis (33). IBD related malignancy has been the hot point for researchers in the past decades and agreement has been achieved on the increased risk of IBD related colorectal cancer (34). As discussed above, it is widely accepted that the chronic local inflammation in bowel is involved in the carcinogenesis of colorectal cancer (35). For extraintestinal cancers, previous epidemiological studies revealed a tight association between IBD and increased risk of numerous cancers like hematologic cancer, lung cancer and non-Hodgkin lymphoma (26,36). However, studies about the association between IBD and lower urinary tract cancers including BCa and MGCa are limited and no conclusive results are available. A previous meta-analysis evaluating the risk of extraintestinal cancers in IBD patients reported an increased risk of BCa (6). However, only 2 eligible studies were included in their pool analysis for risk of BCa, which could weaken the strength of their conclusion. For the risk of PCa in IBD patients, controversies still remain. Some studies reported that there was an association between increased risk of PCa and IBD (23,26,31). In contrast, in a previous meta-analysis of population-based studies, they found there was no increased incidence of PCa among IBD patients (6).

Though mechanism underlying increased risk of PCa among IBD patients in East Asian countries remains elusive, the findings of our study could still be of value in providing guidance for PCa surveillance in IBD patients, especially for those in East Asian countries. Meanwhile, as the risk of BCa was not statistically different between IBD patients and background population, we detected from the results a trend toward higher risk in IBD group. We believed that this might be due to the lack of data from Eastern countries in the included studies. These findings could be inconsistent with previous meta-analysis (6) and more qualitative studies are needed to yield a conclusive result in the future. Besides, although chronic inflammation was thought to be an important risk factor for extraintestinal cancer in IBD patients, mechanism for IBD related colorectal cancer and extraintestinal cancer might be different. Instead, immunosuppression medications that are widely used for IBD treatment have been demonstrated to be related to increased risk of numerous malignancies including non-Hodgkin lymphoma, acute myeloid leukemia and myelodysplastic syndromes, non-melanoma skin cancers and urinary tract cancers (9-12). Concerned the large range of immunosuppression agents currently available for IBD treatment and insufficient data from studies evaluating their effect on carcinogenesis in IBD patients, we were unable to perform a subgroup analysis to evaluate the effect of immunosuppression agents on the risk of cancer in IBD. Future studies conducted on this topic could be of great value in providing guidance in immunosuppression agent option for IBD treatment.

Reporting Checklist: The authors have completed the PRISMA reporting checklist. Available at http://dx.doi.org/10.21037/tau-20-1020

Conflicts of Interest: All authors have completed the ICMJE uniform disclosure form (available at http://dx.doi.org/10.21037/tau-20-1020). The authors have no conflicts of interest to declare.