OPNx was performed by a single fellowship trained surgeon at one institution via subcostal incision. The kidney was fully mobilized in each case to ensure safe hilar access and identification of the ureter. The perinephric fat was dissected to the renal capsule to allow adequate exposure of the renal tumor. An ultrasound probe was utilized to mark out the margins of the tumor prior to excision. The hilum was controlled using bulldog clamps and the tumor was excised. Disruptions in the collecting system were closed with a running absorbable suture and renorrhaphy was performed using the sliding-clip technique prior to removal of hilar clamp (5). Warm ischemia time (WIT) is defined as the time of renal artery clamp placement until clamp removal from the renal vein. There were no alterations in technique over the study period.

A single independent reviewer evaluated the preoperative imaging (CT or T1-weighted MRI) for each patient undergoing OPNx. The MAP score was calculated for each patient utilizing the measurement of posterior renal fat thickness and the measure of severity of perinephric stranding (1). Perinephric fat thickness was measured at the level of the renal vein as a direct line from the level of the renal capsule to the posterior abdominal wall in centimeters (<1 cm =0 points, 1.1–1.9 cm =1 point, >2.0 cm =2 points) (1).

Perinephric stranding was identified as soft tissue attenuation in the fat surrounding the kidney and graded according to severity if present (0= no stranding, 2= thin mild stranding, 3= diffuse stranding) (1). The 2 scores were combined to give a MAP score of 0-5.

APF was identified by the surgeon and defined as the requirement of subcapsular dissection for full exposure of the renal tumor (1).

All procedures performed in this study were in accordance with the Declaration of Helsinki (as revised in 2013) and approved by the Ethics Committee of the Mayo Clinic Hospital, (registration ID#20-008079). Because of the retrospective nature of the research, the requirement for informed consent was waived. We included 100 consecutive patients who underwent OPNx at our institution over an 11-year period. Five patients had two OPNx during the study period, however only the first case was used in our analyses. We excluded 13 procedures where the presence or absence of intraoperative APF was not recorded.

We assessed the ability of MAP score to discriminate between the presence and absence of APF in patients undergoing OPNx by estimating the area under the receiving operating characteristic curve (AUROCC) and corresponding 95% confidence interval (CI). To illustrate the ability of MAP score to predict APF, we plotted the observed proportion of patients who had APF along with exact binomial 95% CI according to MAP score. We additionally performed several supplemental analyses replicating those done by Davidiuk et al. [2014] and Davidiuk [2015] that are explained in the results (1,2). SAS statistical software (version 9.4M5, SAS Institute Inc., Cary, NC, USA) was used for statistical analysis and graphics. 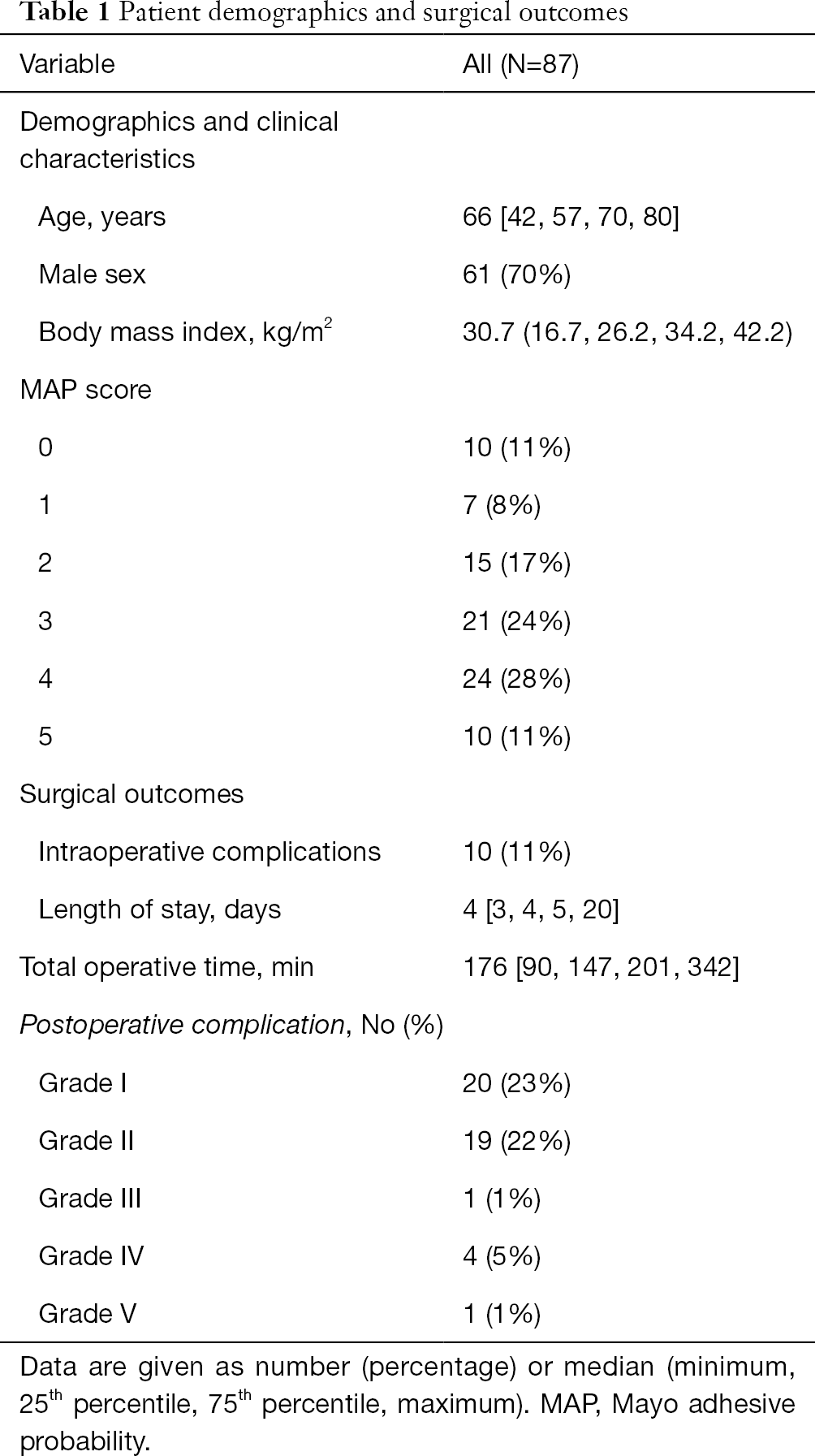 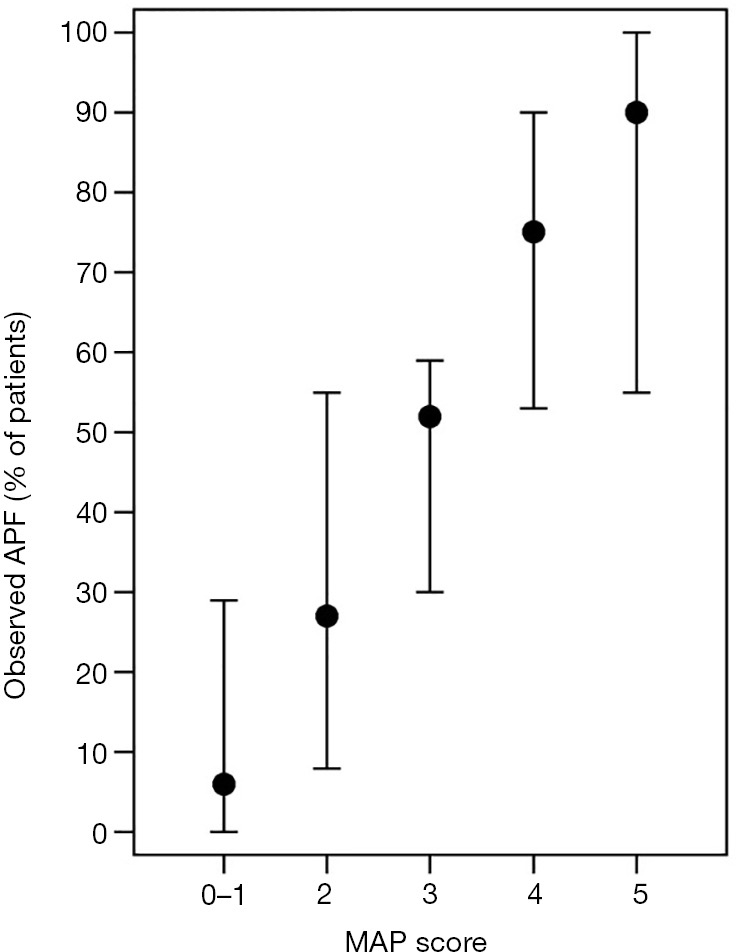 Associations of preoperative patient and tumor characteristics with APF in OPNx 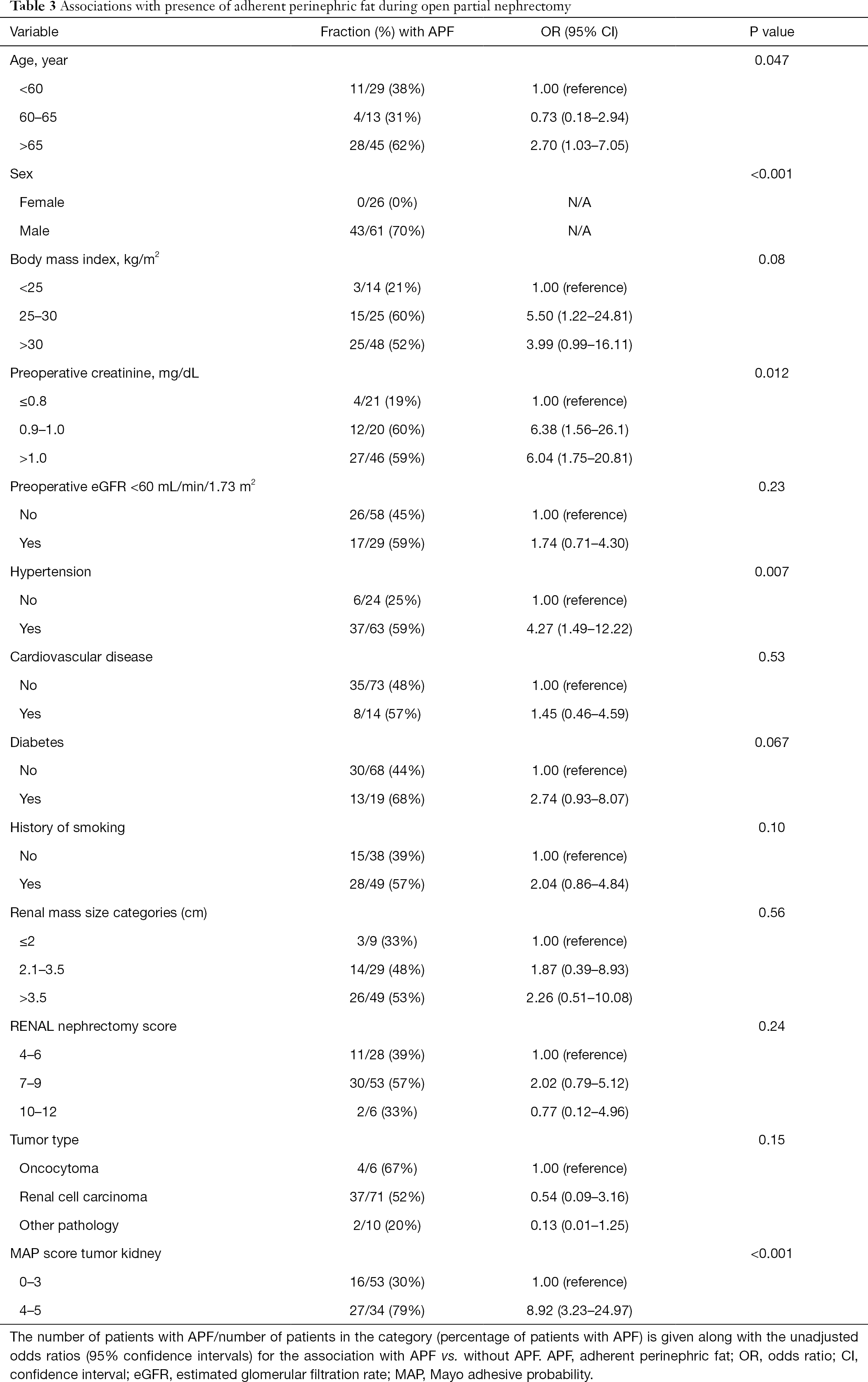 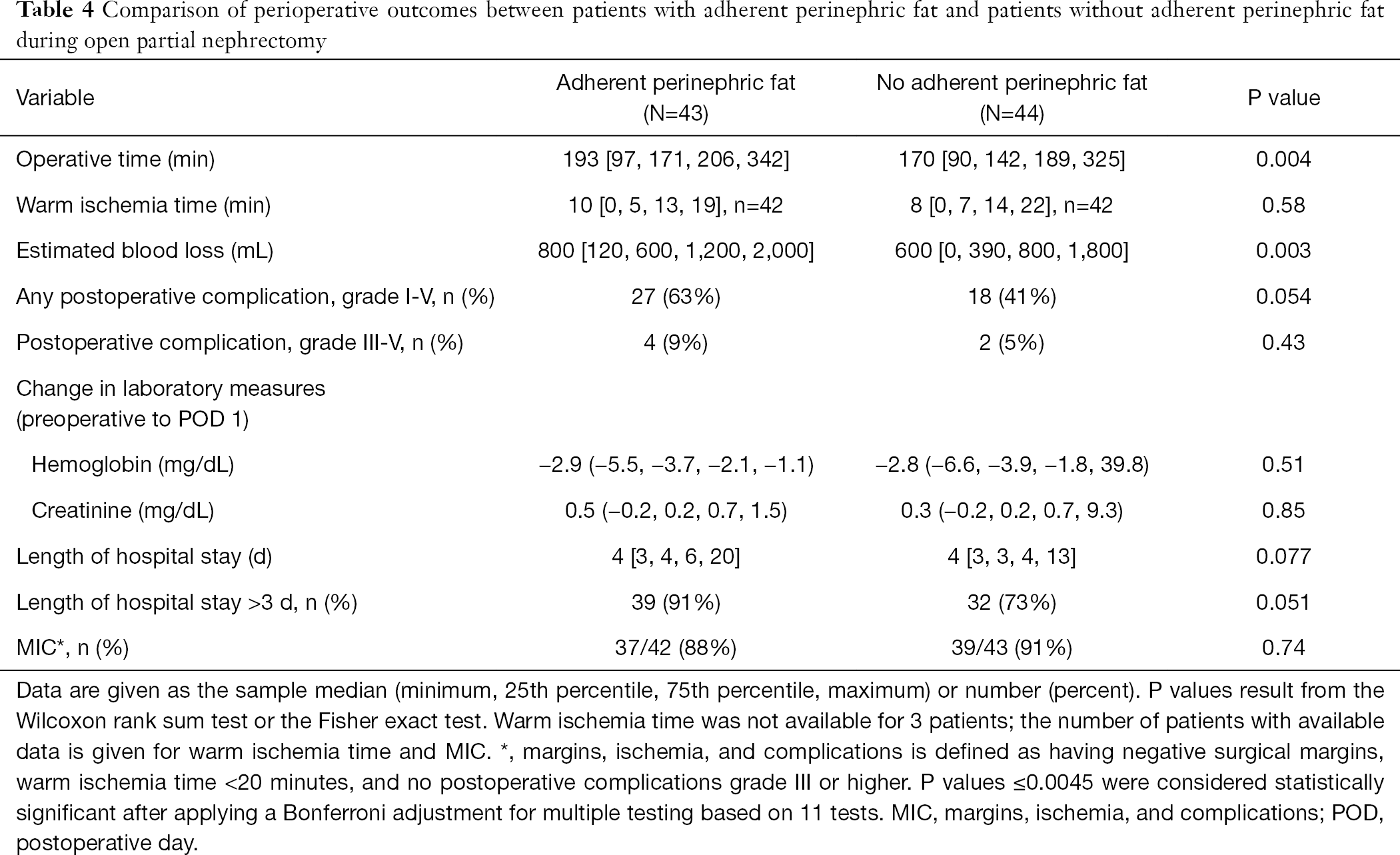 Nephron sparing surgery is an alternative treatment for small localized renal masses with variable postoperative outcomes (9). The presence of APF makes kidney dissection difficult which can result in excessive bleeding and decapsulation (2). The presence of APF may contribute to postoperative PN outcomes (4,10). MAP score, an image based score highly predictive of intraoperative APF during RAPN, utilizes posterior fat thickness and perinephric fat stranding as the two most reproductive variables to predict the presence of APF (1). Multiple studies have found that the presence of APF is associated with increased operative time and EBL (10). Among these studies, risk factors such as male sex, age, larger tumor size, perinephric fat stranding, increased BMI, hypertension, diabetes, waist circumference, and MAP score have been identified as predictors of APF (1,4,11-15). As such, we decided to evaluate if there is any association between APF and MAP score in patients undergoing OPNx.

Our study yielded notable findings. First, we found that MAP score is an excellent predictor of APF in OPNx. Furthermore, the presence of APF was associated with an increased operative time and higher EBL. There was evidence of an association of higher RENAL score with both longer WIT and higher postoperative complications. However, only postoperative complications remained statistically significant after adjustment for multiple comparisons.

Regardless of surgical approach, the presence of APF during PN has been estimated to be between 10.6–55.2% (16). APF was detected in 49% of patients in our study. In a previous prospective evaluation of APF in RAPN, we found the rate to be 30% (2). This higher percentage of APF in patients undergoing OPNx could be attributed to the choice to pursue OPNx over RAPN although that is not proven. At the same time, multiple studies have associated an increased prevalence of APF in elderly males (1,4,13-15). Based on our results, we support these findings. Fat distribution among men and women differ, men tend to have more visceral fat than women, and aging also contributes to an increase in the amount of visceral fat (17,18).

Dariane et al. conducted a retrospective study of 245 OPNx patients in which they looked for APF predictive factors. In this study, the presence of APF was noted in 40.8% of patients. MAP score was the most predictive factor for APF (P<0.001). They also found that there was a significant association between the general Clavien-Dindo classification and the presence of APF (P=0.05), but when this classification was rearranged into major and minor complications, this significance was lost (P=0.7) (4). In our cohort, we did find a possible association between APF and postoperative complications; however, it was not statistically significant. Martin et al. similarly studied a group of 86 patients who had OPNx, to assess the reproducibility of the MAP score. They found that the incidence of APF in their cohort was 50%. Age and diabetes were significant risk factors for the presence of APF. Moreover, stranding score, lateral fat thickness, posterior fat thickness and MAP score were a significant predictor for the presence of APF. After multivariate analysis, only MAP score and age remained statistically significant (15). Their results differed from our data in that there was no association between diabetes and APF.

Bylund et al., studied the association between clinical and radiological variables with the presence of APF (11). In this study, the presence of APF was determined to be 55.2%. However, this group did not find an association between APF and increased blood loss. They did find an association between high grade tumors and APF (11). We propose that the increase in blood loss could be due to the highly inflammatory state which leads to increased adhesion of the perinephric fat (10). Also, the increased total operative time could be attributed to the difficulty in tumor dissection when encountering APF, rather than the result of surgeon experience. Shumate et al., studied the association of APF in perioperative outcomes of 100 patients undergoing RAPN following elimination of the surgical learning curve. This group found that even after elimination of the learning curve, APF was associated with an increased operative time (19). Further studies should be conducted in order to identify additional factors that aid in the prediction of the presence of intraoperative APF in patients undergoing partial nephrectomy (20).

The strength of this study is the single surgeon nature of the evaluation to eliminate surgical technique variation as a contributor to outcomes. There are important limitations to this study. The study was performed using a cohort of patients undergoing OPNx by a high volume surgeon at a tertiary care hospital and which may limit generalizability to other populations. Additionally, the visualization of APF is subjective and can be limited by the expertise and experience of the surgeon. Thirteen out of 100 patients had no APF recorded. Lastly, our small sample size may limit the power of our conclusions. Therefore, the possibility of a false negative association might be considered.

MAP score accurately predicts the presence of APF in patients undergoing OPNx. APF appears to be associated with longer operative time and EBL in OPNx.

Reporting Checklist: The authors have completed the STROBE reporting checklist. Available at http://dx.doi.org/10.21037/tau-20-926

Conflicts of Interest: All authors have completed the ICMJE uniform disclosure form (available at http://dx.doi.org/10.21037/tau-20-926). Dr. DDT reports other from Auris Robotics, outside the submitted work. The other authors have no conflicts of interest to declare.

Ethical Statement: The authors are accountable for all aspects of the work in ensuring that questions related to the accuracy or integrity of any part of the work are appropriately investigated and resolved. All procedures performed in this study were in accordance with the Declaration of Helsinki (as revised in 2013) and approved by the Ethics Committee of the Mayo Clinic Hospital, (registration ID #20-008079). Because of the retrospective nature of the research, the requirement for informed consent was waived.