Chromatin remodeling is an important aspect of epigenetics, as it regulates DNA replication, repair, and recombination through dynamic structural changes in chromatin. SMARCC1, also known as BAF155, together with SMARCA4, SMARCA2, and SMARCB1, comprises the SWI/SNF protein family (1). SMARCC1 functions as a helicase and ATPase that can regulate the transcription of certain genes by changing the chromatin structure around these genes. SMARCC1 is part of the ATP-dependent SWI/SNF chromatin remodeling complex and contains a leucine zipper motif that binds to many typical transcription factors. It has been reported that the expression of SMARCC1 is correlated with some human cancers including prostate cancer, colon cancer, and pancreatic cancer (2,3). For example, the expression of SMARCC1 was shown to be upregulated and positively correlated with tumor recurrence and dedifferentiation in prostate cancer (3,4). MicroRNA-202-5p targets SMARCC1 and acts as a tumor suppressor in colorectal carcinoma (5). In addition, SMARCC1 expression mediates drug resistance in pancreatic cancer cells and is regulated by miR-320c (6). We present the following article in accordance with the REMARK reporting checklist (available at http://dx.doi.org/10.21037/tau-20-935).

Renal cell carcinoma (RCC), which is derived from the renal tubular epithelium, is the most common urological cancer (7). The four common subtypes of RCC are as follows: clear cell RCC (ccRCC), papillary RCC (PRCC), chromophobe RCC (ChRCC), and collecting duct carcinoma. ccRCC accounts for as many as 75–80% of all RCC cases, whereas the other three subtypes of PRCC, ChRCC, and collecting duct carcinoma account for the other 20–25% of RCC cases (8-11). In 2018, it was reported that mutations in or loss of SMARCC1 are associated with the dedifferentiation subsets of RCC (9). However, the mechanisms and regulatory roles of SMARCC1 in ccRCC require further research.

The aim of our study was to explore the expression of SMARCC1 in ccRCC as well as the correlation between SMARCC1 expression and the clinical parameters and overall survival of patients with ccRCC.

All 150 patients were diagnosed with ccRCC based on the World Health Organization/International Society of Urological Pathology (WHO/ISUP) classification system of renal cell tumors. All included patients in this study received no extra therapy from February 2008 to September 2010 before surgery, and were followed up after surgery until August 2015. All the patients with ccRCC were graded using the WHO/ISUP grading system and divided into two groups by tumor pathology: the clear cell renal carcinoma group and the clear cell renal carcinoma group with other pathological types (clear cell carcinoma with sarcomatoid degeneration, clear cell carcinoma with PRCC, and clear cell carcinoma with ChRCC). In addition, all the patients were divided into several sub-groups by gender (male or female), pathological grade (low pathological grade: grades I and II, high pathological grade: grades III and IV), and tumor size (≤5 or >5 cm). The American Joint Committee on Cancer (AJCC) 7th Edition Cancer Staging System was used for all included cases in this study. The clinical characteristics of patients were described in detail in Table 1. The study was conducted in accordance with the Declaration of Helsinki (as revised in 2013). Informed consent was obtained, and the study was approved by The Ethics Boards of Huashan Hospital (No. 2020-529). All experiments were carried out in accordance with institutional guidelines. Written informed consent was obtained from the patients undergoing surgery.

A total of 30 tissue samples (15 cancer tissues and 15 adjacent tissues) were prepared for the cDNA microarray (MecDNA-HKidE030CS01, Shanghai Outdo Biotech Co., Ltd.) according to the manufacturer’s instructions. Real-time PCR was performed using a SYBR® Premix Ex Taq™ II (Tli RNaseH Plus, RR820Q) in 96-well reaction plates according to the manufacturer’s instructions. The forward primer sequence was SMARCC1-F: 5'-TGAGGAGGATTATGAGGTGG-3', and the reverse primer sequence was SMARCC1-R: 5'-CGTGATTCTGTTGGTGTCG-3'. The PCR product length was 177 bp. β-Actin served as a reference gene, and the primers used were as follows: Human β-actin-F1: 5'-GAAGAGCTACGAGCTGCCTGA-3' Human β-actin 5'-CAGACAGCACTGTGTTGGCG-3'. The β-actin PCR product length was 191 bp.

The data of SMARCC1 expression in ccRCC tissues was analyzed by Npar Tests. The relationship between SMARCC1 expression and clinical factors was calculated using the Spearman rank correlation coefficient. The correlation between SMARCC1 expression and clinical data as well as the overall survival time was evaluated using the Kaplan-Meier method and the log-rank test. Finally, variables that were statistically significant in the univariate analysis were included in a Cox multivariate regression survival analysis. P<0.05 was considered statistically significant.

The expression of SMARCC1 in ccRCC tissues was significantly lower compared with their corresponding paired para-tumor tissues (4.370±2.036 vs. 6.167±1.162, P=0.001), especially in the cortex (Figure 1). Consistently, the result obtained from the ccRCC cDNA tissue microarray also showed that SMARCC1 mRNA expression in ccRCC tissues was significantly lower than that in para-tumor tissues. The results were shown in detail in Figure 2. 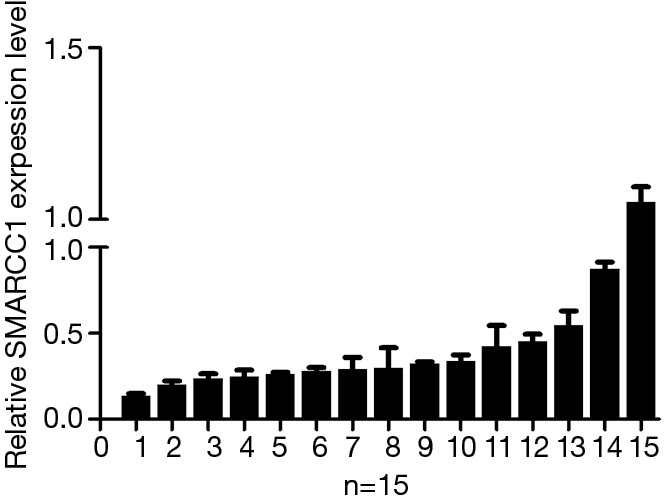 The expression of SMARCC1 was significantly correlated with high pathological grade

High SMARCC1 expression was correlated with a good prognosis in ccRCC 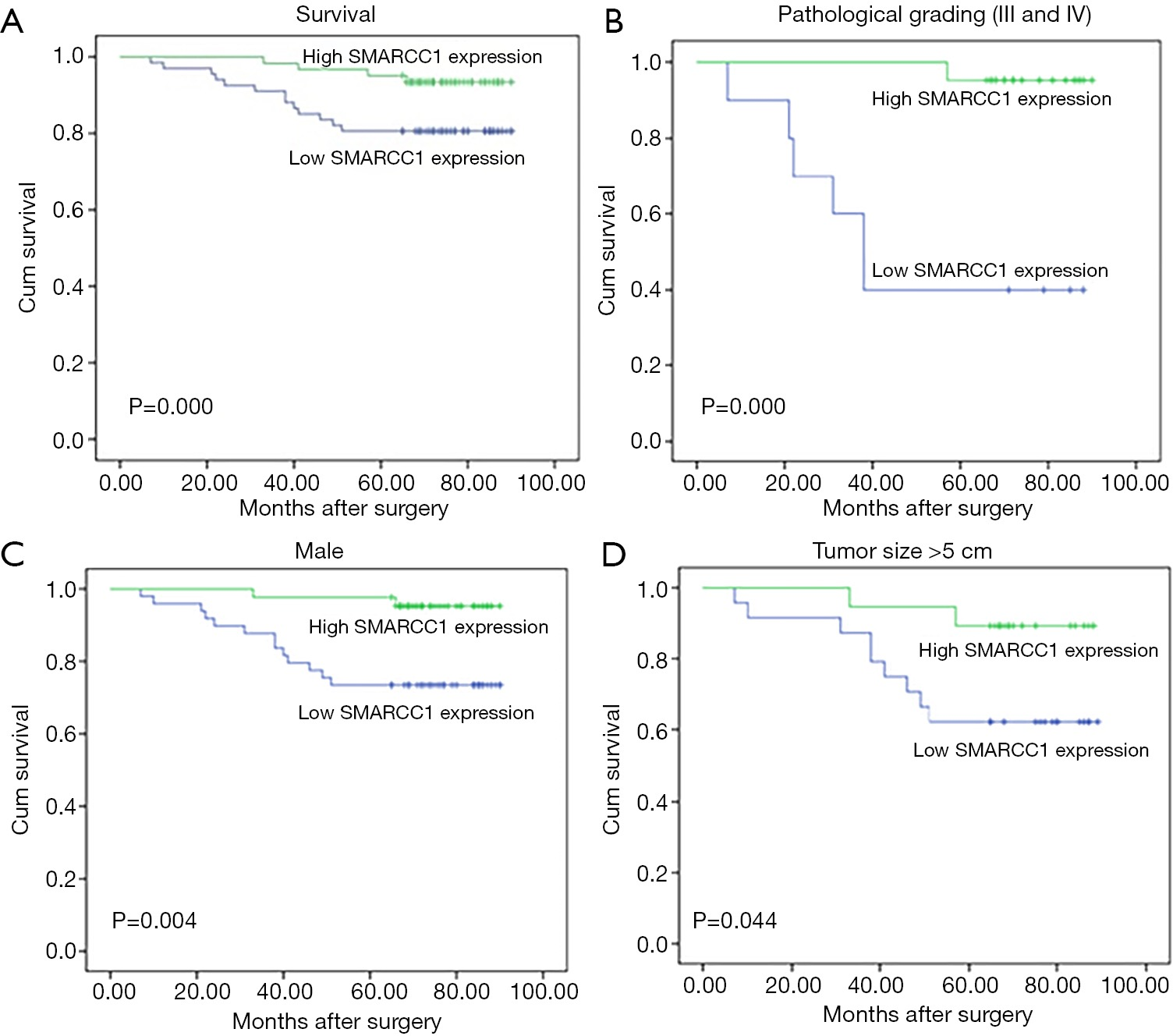 Subsequently, the multi-factor survival analysis showed that SMARCC1 expression could serve as an independent predictive factor for ccRCC (P=0.008). The results of the analysis were shown in detail in Table 3.

It has been reported that SMARCC1 plays a dual regulatory role of oncogene and tumor suppressor in cancer (12,13). SMARCC1 expression is up-regulated in prostate cancer and is positively correlated with tumor recurrence and differentiation (14). Moreover, the arginine methyltransferase CARM1 targets SMARCC1 to promote tumor progression and metastasis. However, higher SMARCC1 expression was found to be significantly correlated with a better overall survival in both colorectal cancer and prostate cancer (4,15).

Funding: This work was supported by grant from National Natural Science Funds of China (Multidimensional evaluation and mechanism research on iNSCs transplantation for cerebral nerve repair in AD mice, No. 81571655).

Reporting Checklist: The authors have completed the REMARK reporting checklist. Available at http://dx.doi.org/10.21037/tau-20-935

Conflicts of Interest: All authors have completed the ICMJE uniform disclosure form (available at http://dx.doi.org/10.21037/tau-20-935). QD serves as an unpaid editorial board member of Translational Andrology and Urology from Mar 2012 to Feb 2022. The other authors have no conflicts of interest to declare.

Ethical Statement: The authors are accountable for all aspects of the work in ensuring that questions related to the accuracy or integrity of any part of the work are appropriately investigated and resolved. The study was conducted in accordance with the Declaration of Helsinki (as revised in 2013). Informed consent was obtained, and the study was approved by The Ethics Boards of Huashan Hospital (No.2020-529). All experiments were carried out in accordance with institutional guidelines. Written informed consent was obtained from the patients undergoing surgery.