Bladder cancer (BCa) is the most common malignant tumor of the genitourinary system, with high mortality rates worldwide (1). BCa is categorized into two subtypes, including non-muscle-invasive bladder cancer (NMIBC) and muscle-invasive bladder cancer (MIBC). Most BCa patients are primarily diagnosed with NMIBC. However, approximately 50–70% of patients with NMIBC will experience disease recurrence within 5 years. Also, 10–30% of patients will develop MIBC, which currently has a poor prognosis (2). Although several therapeutic approaches, including surgical resection, chemotherapy, and radiotherapy, have been developed, the 5-year survival rate of MIBC patients is only approximately 60% (3,4). It is of vital importance to identify novel biomarkers and effective targets for BCa.

Circular RNAs (circRNAs) are a novel class of RNAs that are generated via endogenous splicing. These covalently closed-loop structures are resistant to exonuclease cleavage due to the absence of 5'-3' polyadenylation tails. The high stability displayed by circRNAs suggests they are strong candidates, as biomarkers (5,6). There is evidence that circRNAs play critical roles in cancer biology (7-9), and more specifically, in the development of BCa. One mechanism employed by circRNAs is via competition with microRNAs (miRNA). The competing endogenous circRNAs, known as ceRNAs, serve as miRNA sponges. For instance, a highly conserved circRNA, ciRS-7 (also termed CDR1as), exerts anti-tumor functions in BCa by sponging miR-135a (10). CircHIPK3 can effectively inhibit tumor aggression and metastasis of BCa by acting as ceRNAs of miR-558 (11). CircRIP2 accelerates BCa progression by targeting the miR-1305/Tgf-β2/smad3 axis (12). Meanwhile, CircFAM114A2 suppresses BCa progression via regulating ∆NP63 by sponging miR-762 (13). Circular RNA circPICALM inhibits BCa metastasis via influencing FAK phosphorylation by acting as ceRNAs of miR-1265 (14). These findings all together strongly suggest the importance of circRNAs as novel biomarkers in the regulation and development of BCa. However, many unidentified circRNAs remain to be investigated.

In this study, a circRNA microarray from the GEO database was used to screen differentially expressed circRNAs between BCa tissues and paired-matched adjacent normal tissues. To depict whether the differentially expressed circRNAs functioned as ceRNAs in BCa, we predicted their sponged miRNAs and miRNAs-targeted mRNAs. The signaling pathways of miRNA-targeted mRNAs were then analyzed, and a circRNA-miRNA-mRNA regulatory network was constructed. A protein-protein interaction (PPI) network was subsequently established, and the hub genes were subsequently identified. Our results provide significant insights into the molecular mechanisms that regulate the progression of BCa from the circRNA-miRNA-mRNA network. We present the following article in accordance with the MDAR reporting checklist (available at http://dx.doi.org/10.21037/tau-20-660).

Prediction of interactions between circRNAs and miRNAs was conducted using the CircInteractome database. MiRNAs with a context score percentile >98 were eventually selected.

Construction of a circRNA-miRNA-mRNA regulatory network

Establishment of PPI regulatory network and identification of hub genes

A PPI network was constructed by using the STRING (V 11.5) and visualized by the CytoCope 3.7.1 software. Additionally, the highly interacted hub genes from the PPI network were screened by the CytoHubba plugin in Cytoscape.

Verification of hub gene expression with the GEPIA database

All statistical analyses were performed using R (v.3.6.0) software and SPSS v.24.0 software (IBM Corp.). The correlation between miRNA expression and patients’ survival was assessed by Kaplan-Meier method. The expression of hub genes in different tissues was analyzed by Student’s t-test. The P value <0.05 was considered statistically significant.

The GSE92675 dataset from GEO was analyzed by the limma package in R (P value <0.05 and log2|fold change| >2), we identified 79 up-regulated and 28 down-regulated circRNAs (Figure 1). Also, a total of 1,229 differential expressed mRNAs (472 up-regulated and 757 down-regulated mRNAs) were identified from the TCGA database between BCa tissues and normal bladder tissues (FDR value <0.05 and log2|fold change| >2) (Figure 2). Subsequently, three circRNAs were selected according to the P value. The basic structure patterns of these three circRNAs (has_circ_0023642, has_circ_0047322, has_circ_0041151) are exhibited in Figure 3. 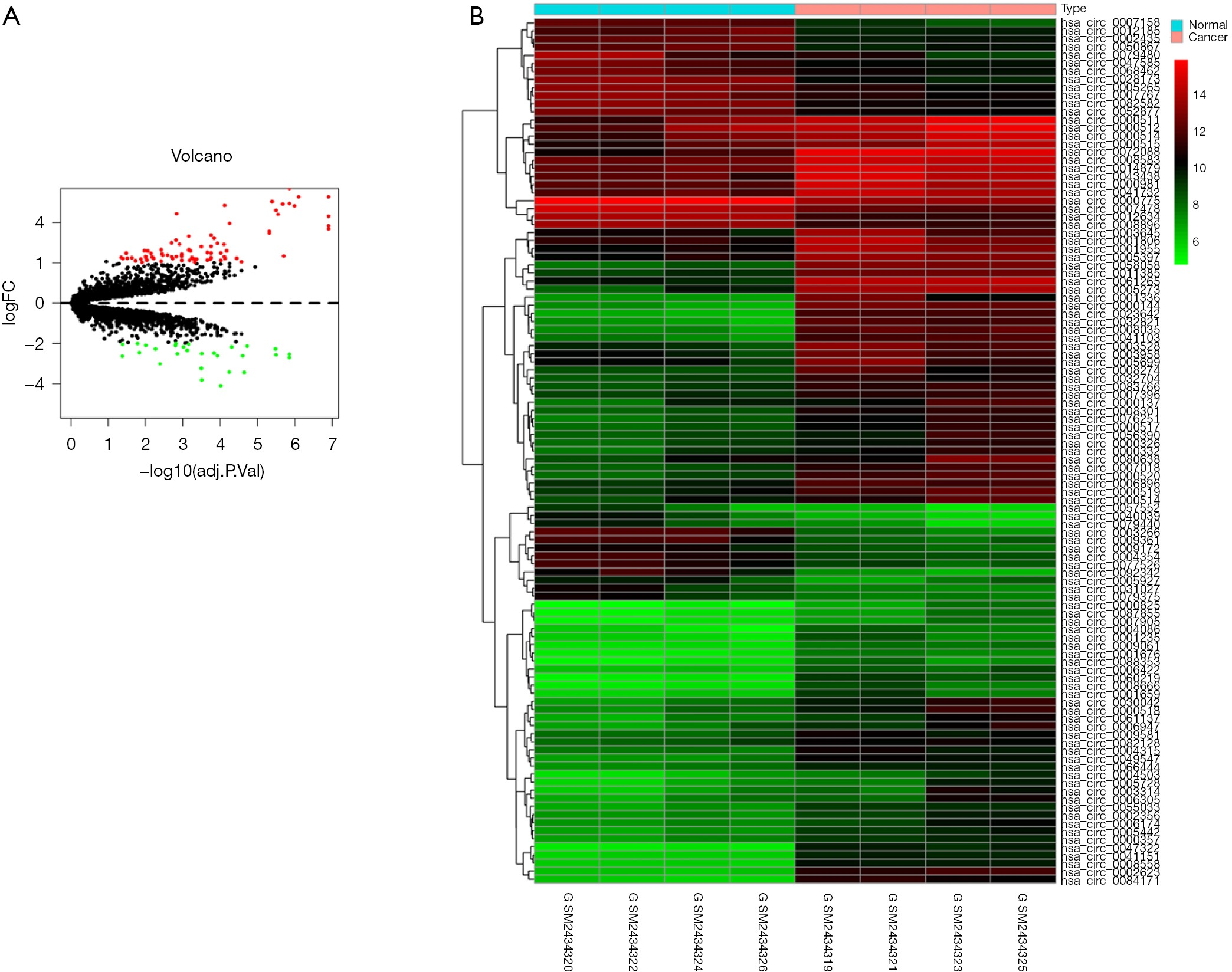 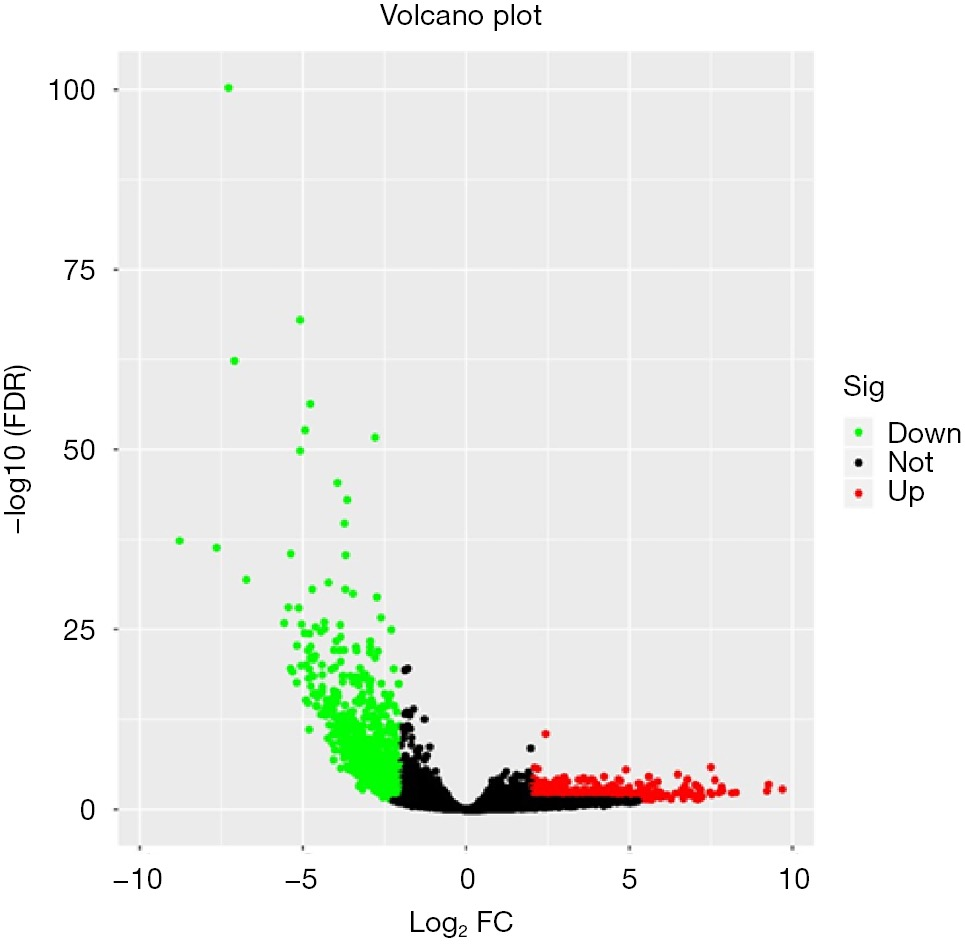 Accumulated evidence has demonstrated that some circRNAs derived from exons play crucial roles in tumor progression by acting as miRNAs “decoys” to sponge miRNAs. To identify whether these three circRNAs performed similar roles in BCa, we carried out a context score percentile screening in the CircInteractome database. Four miRNAs (miR-616, miR-515-5p, miR-647, miR-1178) with a context score percentile >98 were selected (Figure 4A). The specific binding sites between circRNAs and miRNAs were shown in Figure 4B. Enrichr was employed to explore the signaling pathways of these four miRNAs. As shown in Figure 5, all these four miRNAs are strongly associated with some cancer-related pathways. 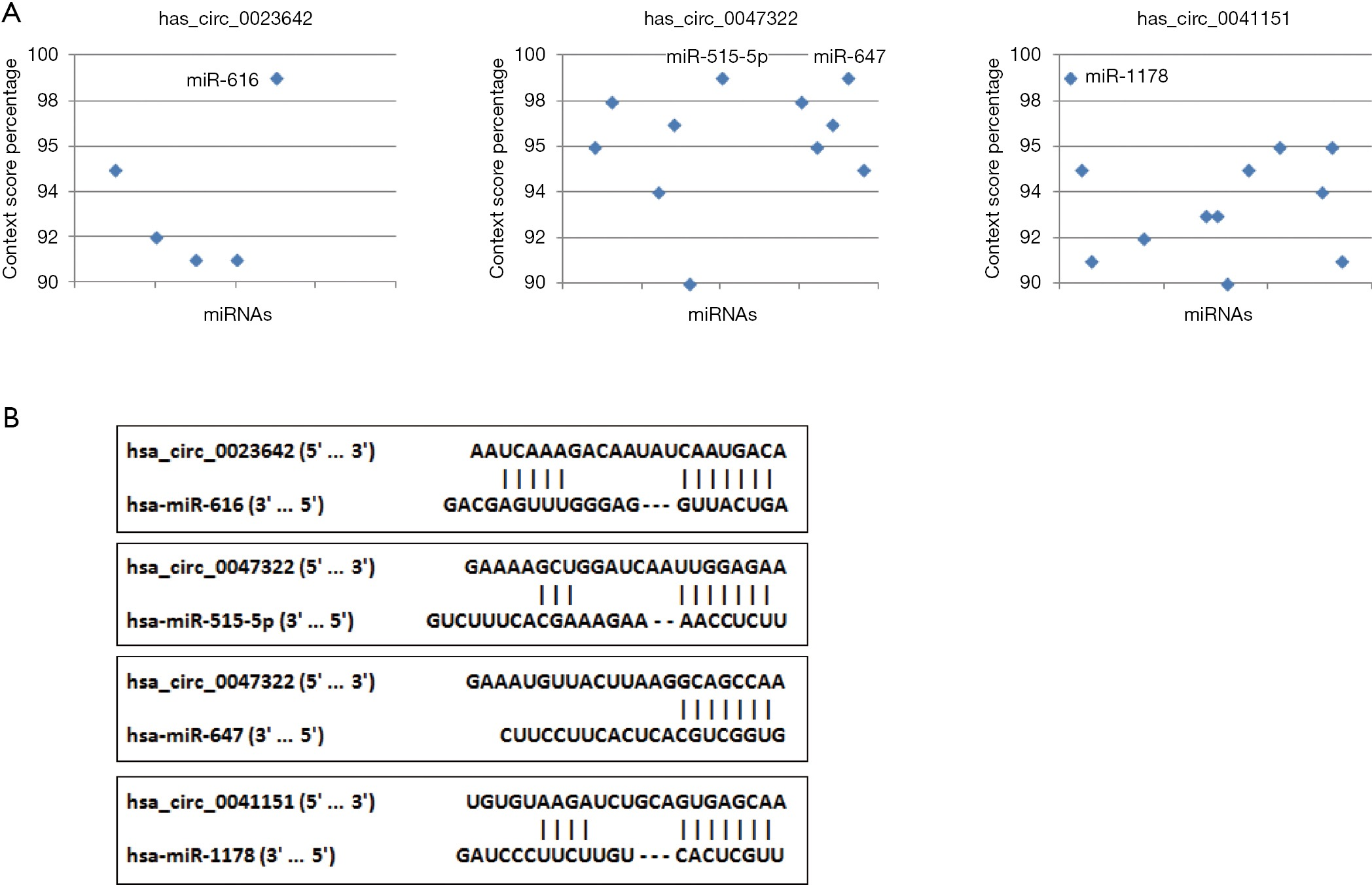 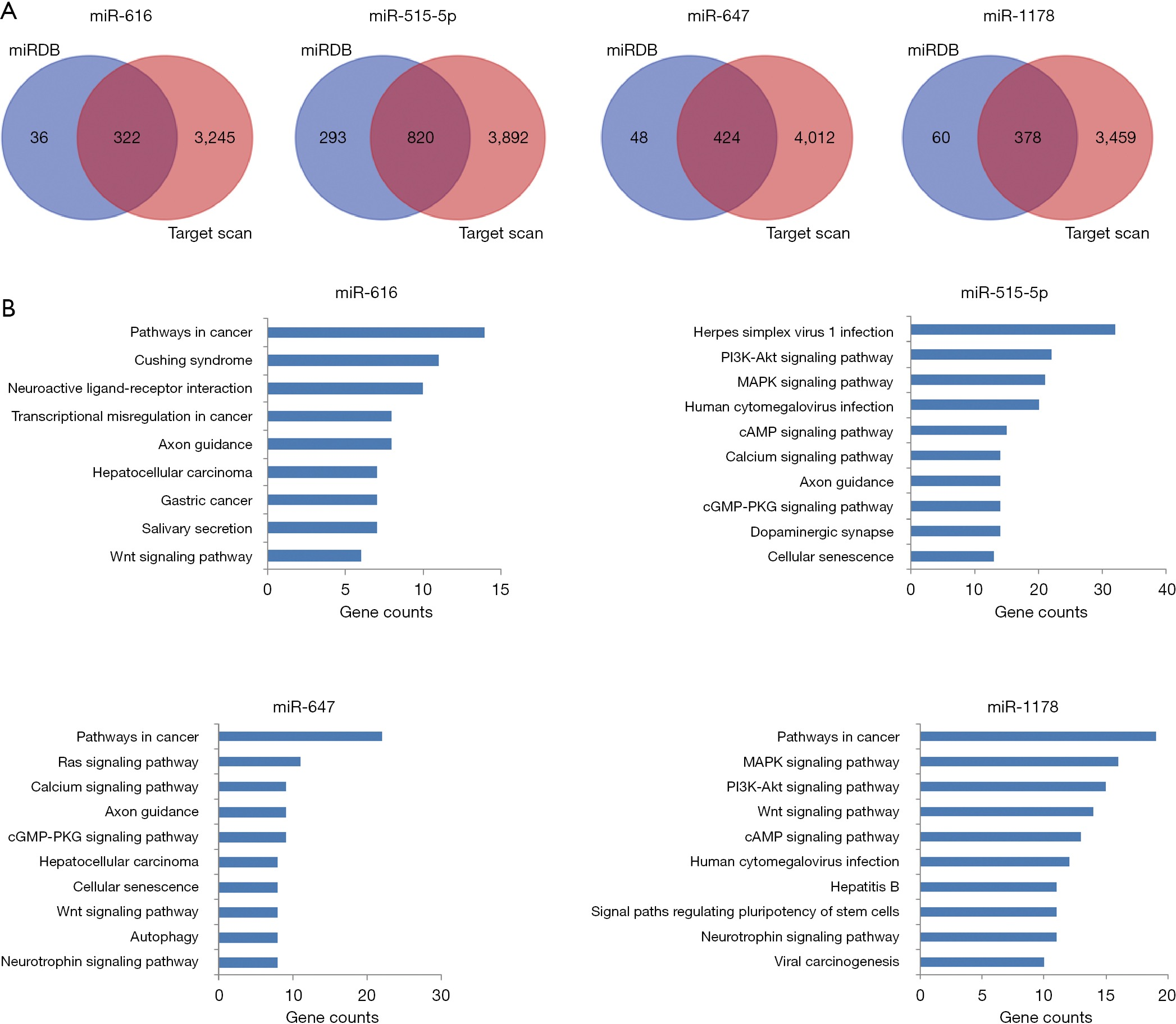 Figure 5 The potential signaling pathways of miRNAs. (A) Venn diagram of overlapping targeted mRNAs from TargetScan and miRDB. (B) Signaling pathway analysis of predicted miRNAs.

Expression of the four miRNAs with the Kaplan-Meier Plotter database 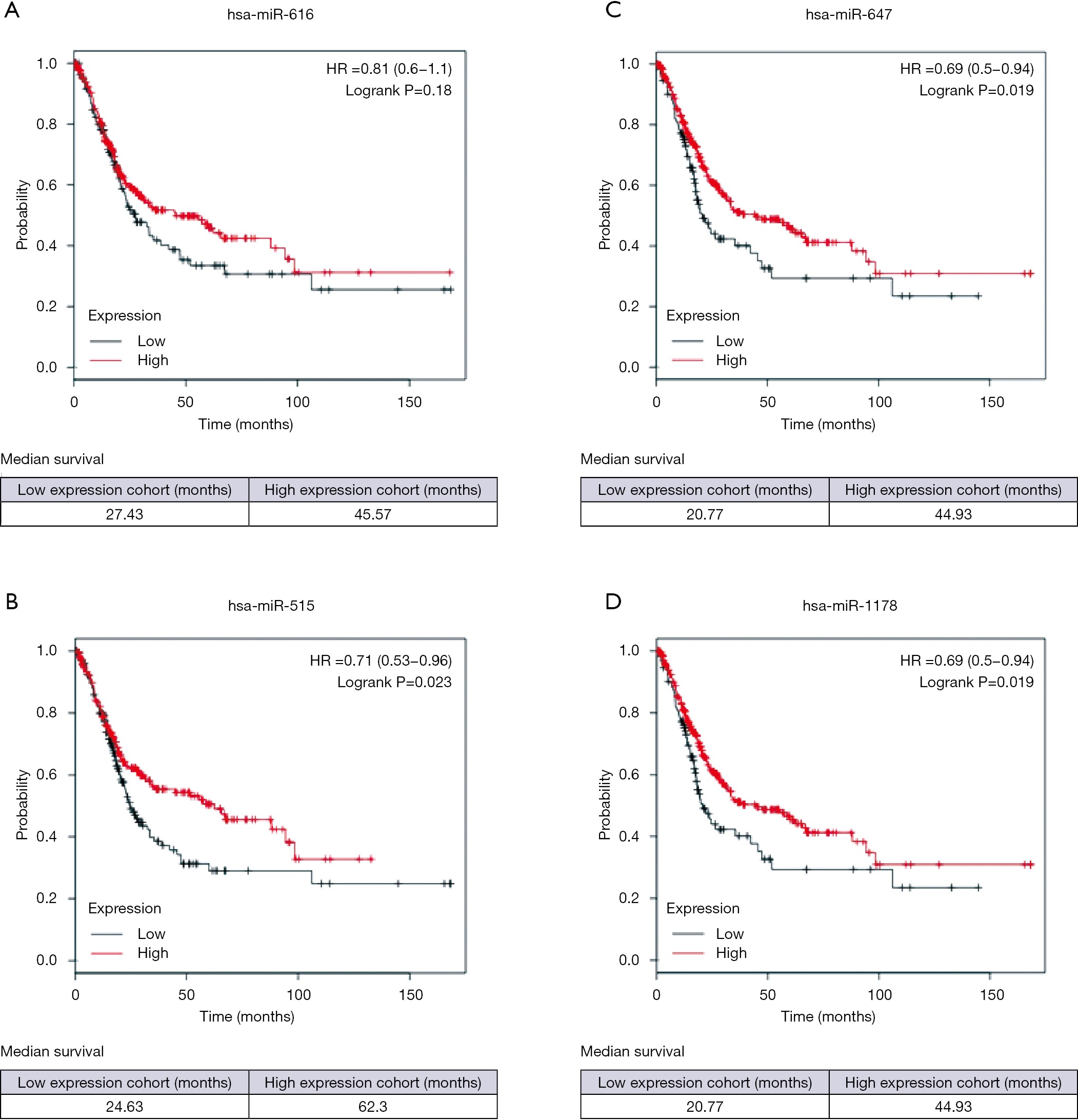 Figure 6 The survival analysis of the predicted miRNAs with the Kaplan-Meier Plotter database.

Ten thousand and seventy-one target genes of the four miRNAs mentioned above were obtained from the TargetScan prediction tool. Additionally, 472 up-regulated genes in BCa were identified from TCGA (Figure 2). These investigations led to the identification of 181 overlapping target genes that played critical roles in BCa (Figure 7A). 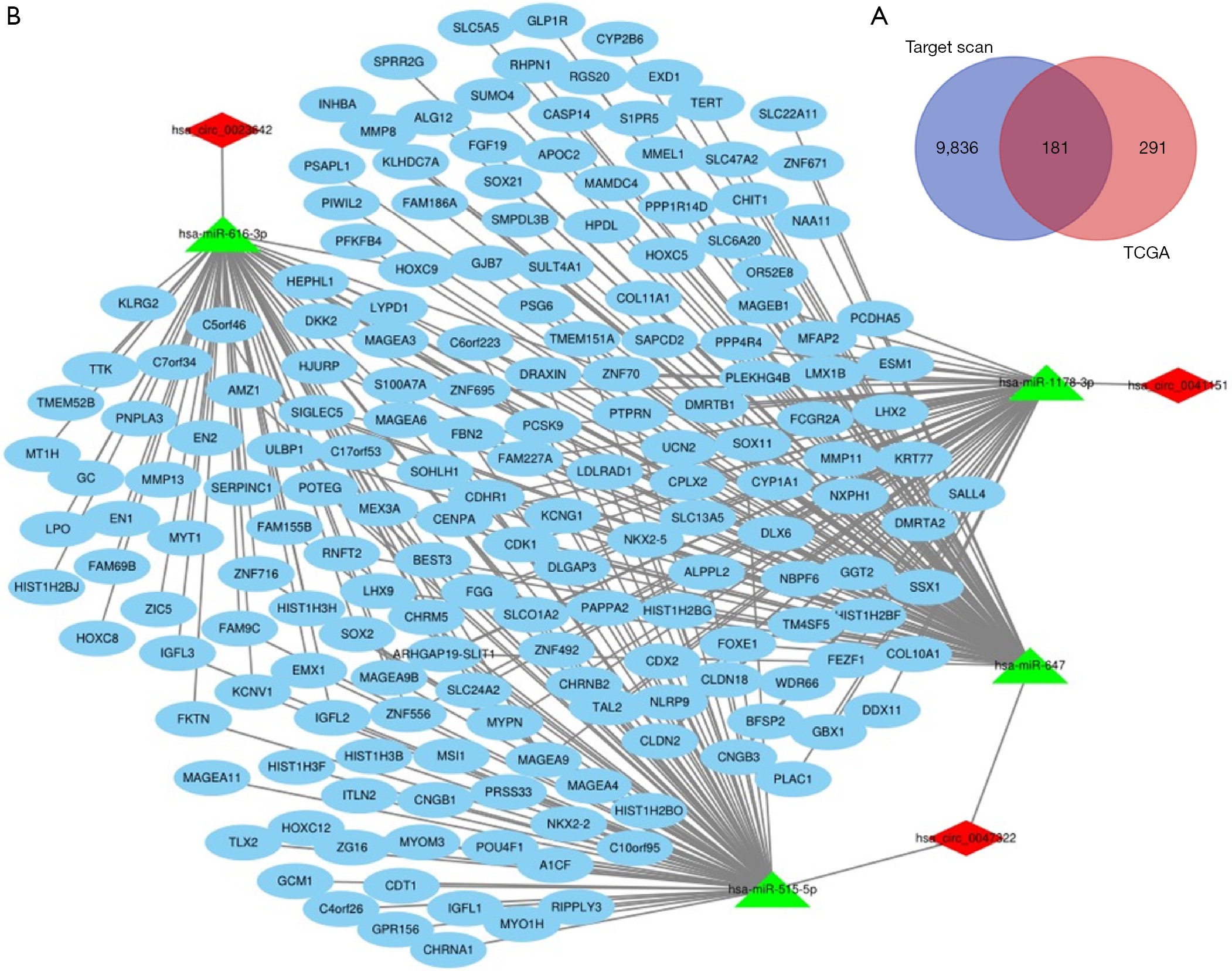 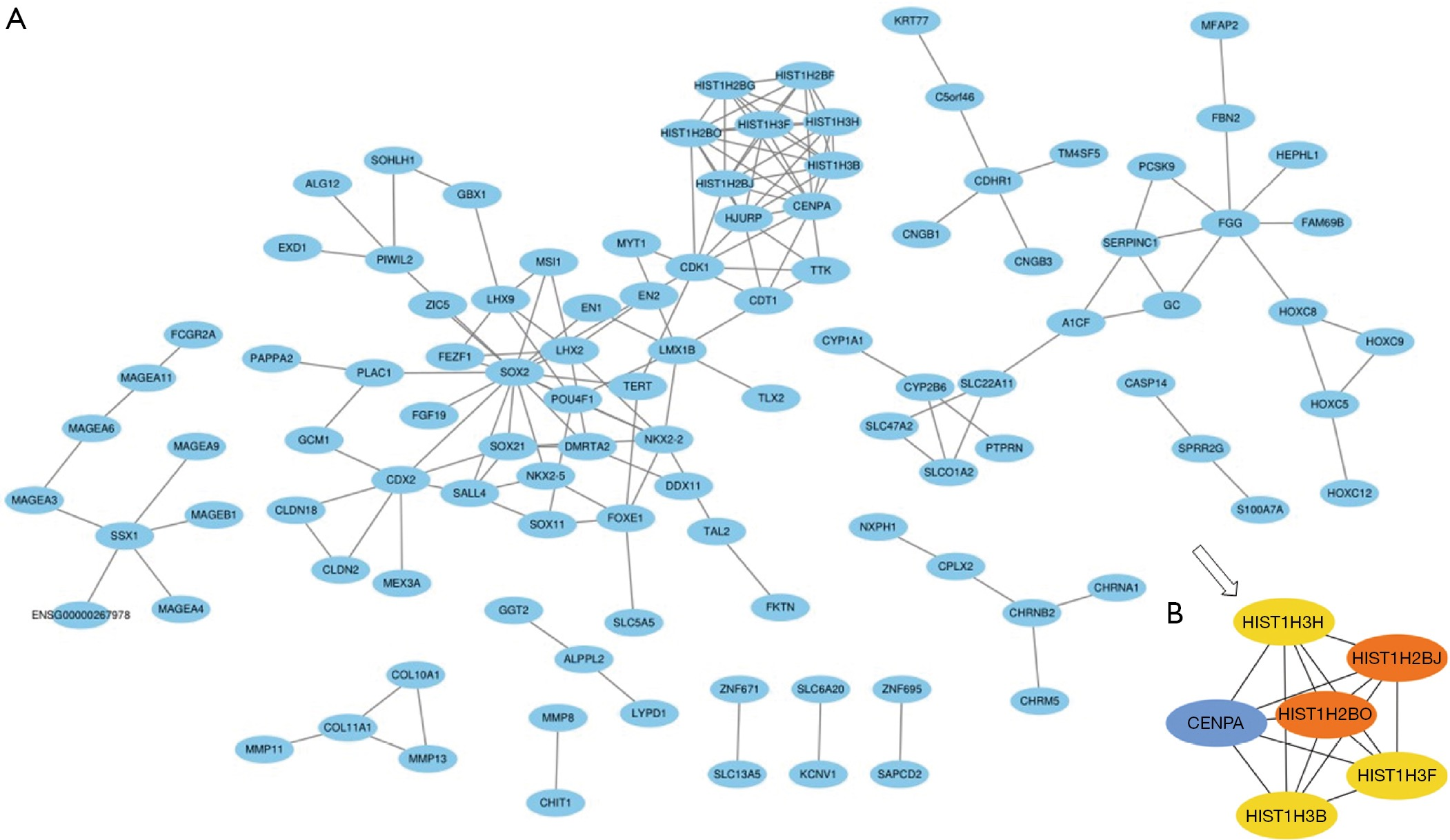 Figure 8 PPI network construction and hub gene selection. (A) PPI network was constructed by using the string database and visualizing it with Cytoscape software. (B) Top six hub genes selected from the PPI network by the CytoHubba plugin in Cytoscape. PPI, protein-protein interaction. 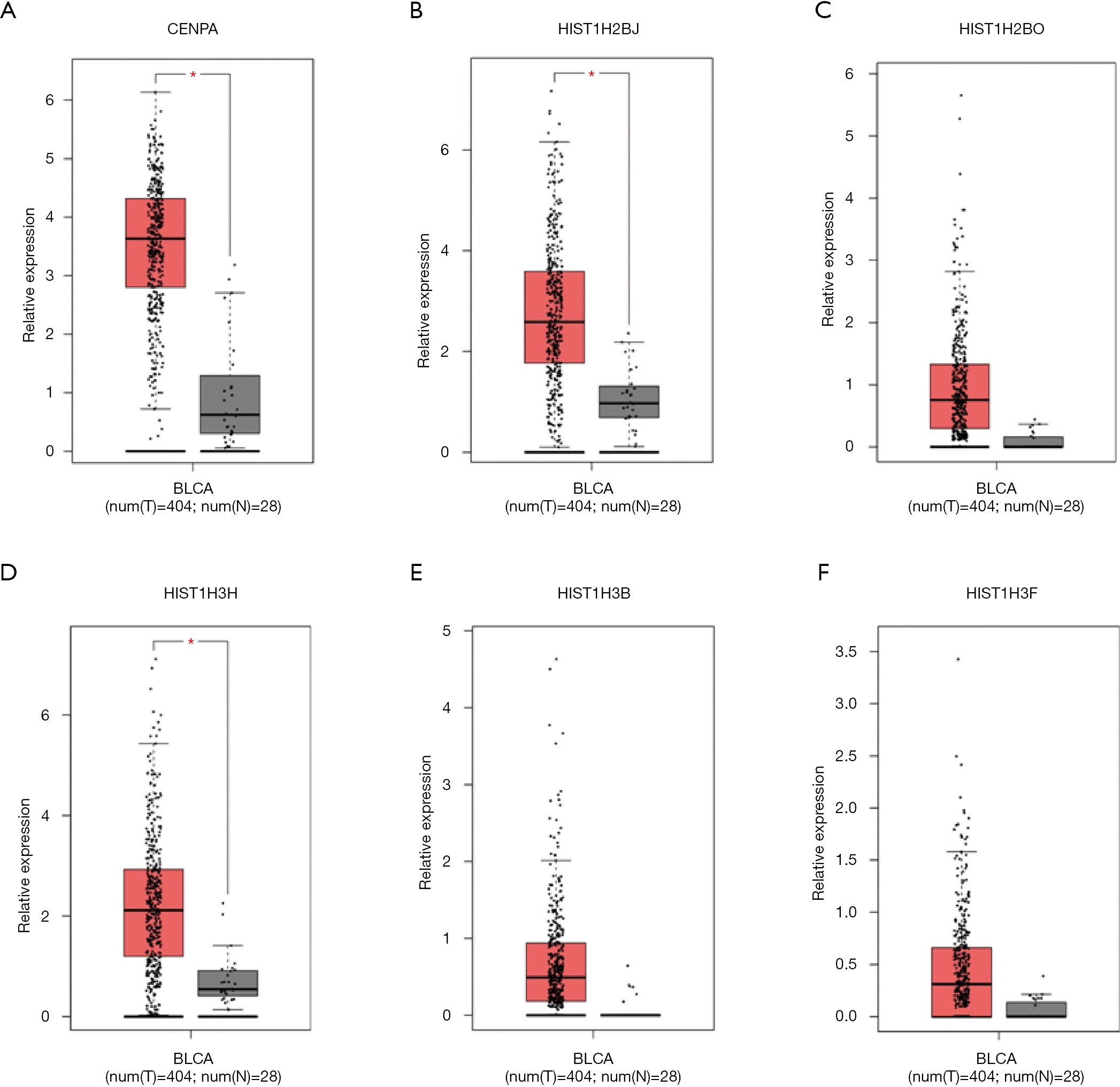 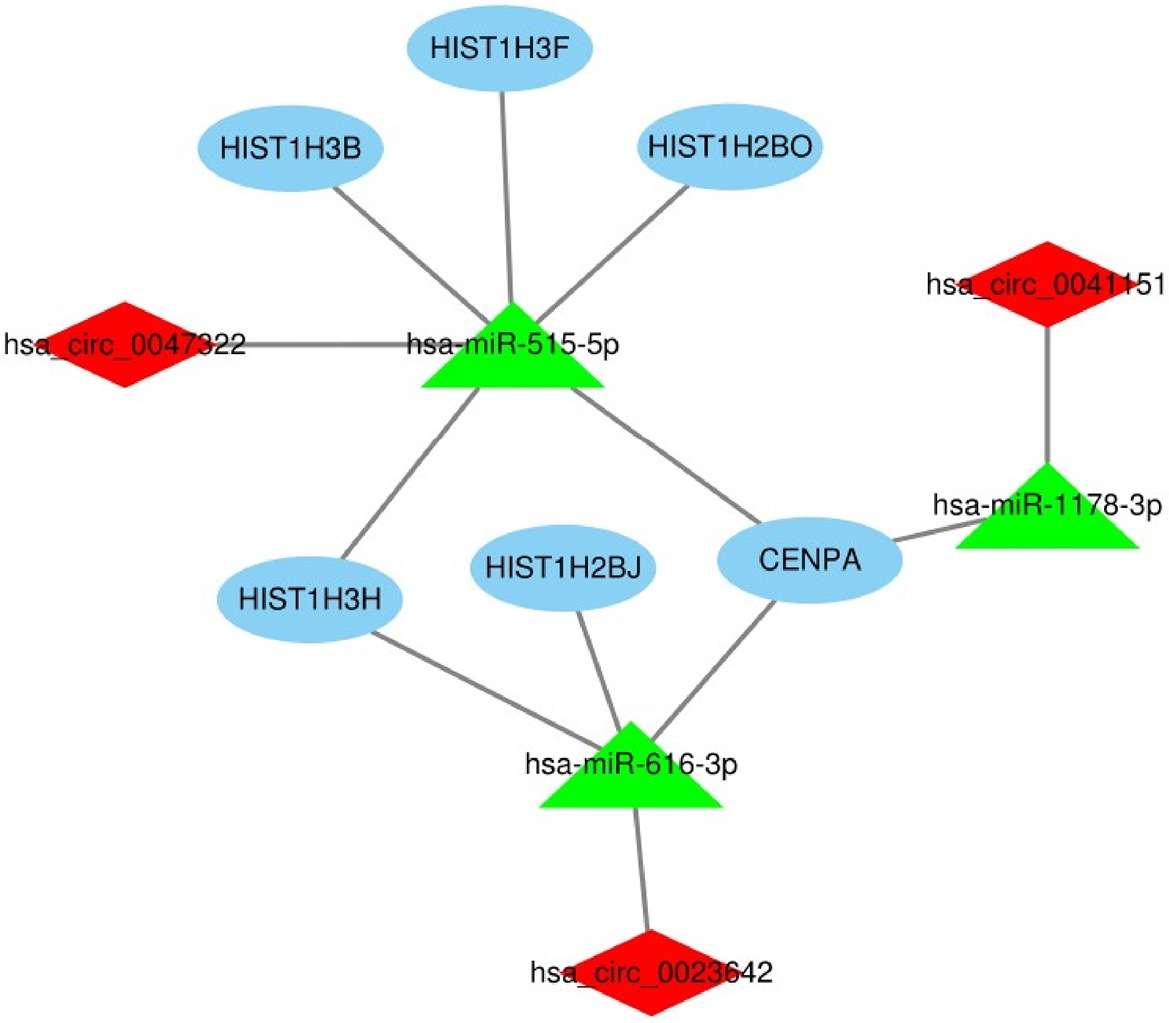 Accumulating evidence suggests that circRNAs are abundant and stable in eukaryotic cells, demonstrating high conservation and disease specificity (15-17). It has been reported that circRNAs that are abnormally expressed play crucial roles in various cancers (18-22). Their resistance to exonuclease cleavage due to their covalently closed structure has resulted in their routine use as prognostic and diagnostic biomarkers. In BCa, various circRNAs, including Cdr1as (10), circHIPK3 (11), circRIP2 (12), circFAM114A2 (13), circPICALM (14), circZKSCAN1 (23), circACVR2A (24), circDOCK1 (25), have been reported to exert crucial roles in regulating the disease progression. CircRNAs have also been used to aid in the clinical diagnosis of BCa and subsequent courses of therapy. However, many circRNAs remain unidentified.

In this study, microarray data were collected from the GEO database. Three up-regulated circRNAs (has_circ_0023642, has_circ_0047322, has_circ_0041151) were subsequently screened in BCa for further analysis. To ascertain whether those above three circRNAs function as miRNA sponges in BCa, the CircInteractome online tool was utilized to predict miRNAs with binding potential to circRNAs. Some circRNAs harbor abundant miRNA binding sites, thereby acting as “decoys” or “sponges” to regulate gene expression. Four miRNAs (miR-616, miR-515-5p, miR-647, miR-1178) were determined to have high binding potentials with these three circRNAs. We then analyzed the effect of the miRNAs on the survival of BCa patients via the online Kaplan-Meier Plotter database. According to the results, three miRNAs, including miR-515-5p, miR-647, and miR-1178, showed a positive association with the better survival of BCa, which suggested their potential tumor-suppressive functions in BCa.

Reporting Checklist: The authors have completed the MDAR reporting checklist. Available at http://dx.doi.org/10.21037/tau-20-660

Conflicts of Interest: All authors have completed the ICMJE uniform disclosure form (available at http://dx.doi.org/10.21037/tau-20-660). The authors have no conflicts of interest to declare.