Treatments for childhood cancer are often gonadotoxic and cause infertility up to 75% of male survivors (1). This adversely affects quality of life in adulthood (2). For post-pubertal males, semen banking is an effective method of fertility preservation. However, this is not the case for prepubertal children since they only have spermatogonia stem cells (SSC), the precursor cells for mature spermatozoa. As the cure rate of childhood cancer has increased to over 80% (3), the need for fertility preservation in prepubertal boys has been escalated (4).

A potential fertility preservation technique is to use stored SSC isolated from a testicular biopsy prior to cancer treatment. These cells could be cryopreserved and potentially transplanted back after cancer remission (5-7). While not yet demonstrated in humans, success has been achieved in multiple animal models including non-human primate (8). An important concern about this technique, especially in hematologic cancer patients such as leukemia is removing any malignant cells from the testicular biopsy to eliminate the risk of reintroducing cancer to the patient (9). It has been shown that germ cell transplantation with even minute contamination of leukemic cells could lead to transmission of leukemia (10).

We report a pediatric patient with B-cell acute lymphoblastic leukemia (ALL) who participated in the testicular tissue banking program at Wake Forest Institute for Regenerative Medicine (WFIRM) (11) and describe the different analysis technique utilized to optimally determine fertility preservation options that could be applied to him based on recent state of the art technologies.

We present the following article in accordance with the CARE reporting checklist (available at http://dx.doi.org/10.21037/tau-20-908).

An 11-year-old Hispanic male was diagnosed with B-cell ALL. His genitourinary exam at original diagnosis was normal, with Tanner stage I development, and he did not undergo testicular biopsy at that time. He achieved remission with standard chemotherapy.

Three years later, while on maintenance chemotherapy (age 14), he developed fatigue and weight loss. A complete blood count showed pancytopenia, and a bone marrow aspirate showed recurrence of the ALL. At that time, he had Tanner stage III genitalia and bilateral, painless testicular enlargement, right greater than left. Ultrasound of the testicles confirmed the exam findings and was concerning for recurrent leukemia. The results of pathological examination of testis tissue at different biopsies are shown in Figure 1. 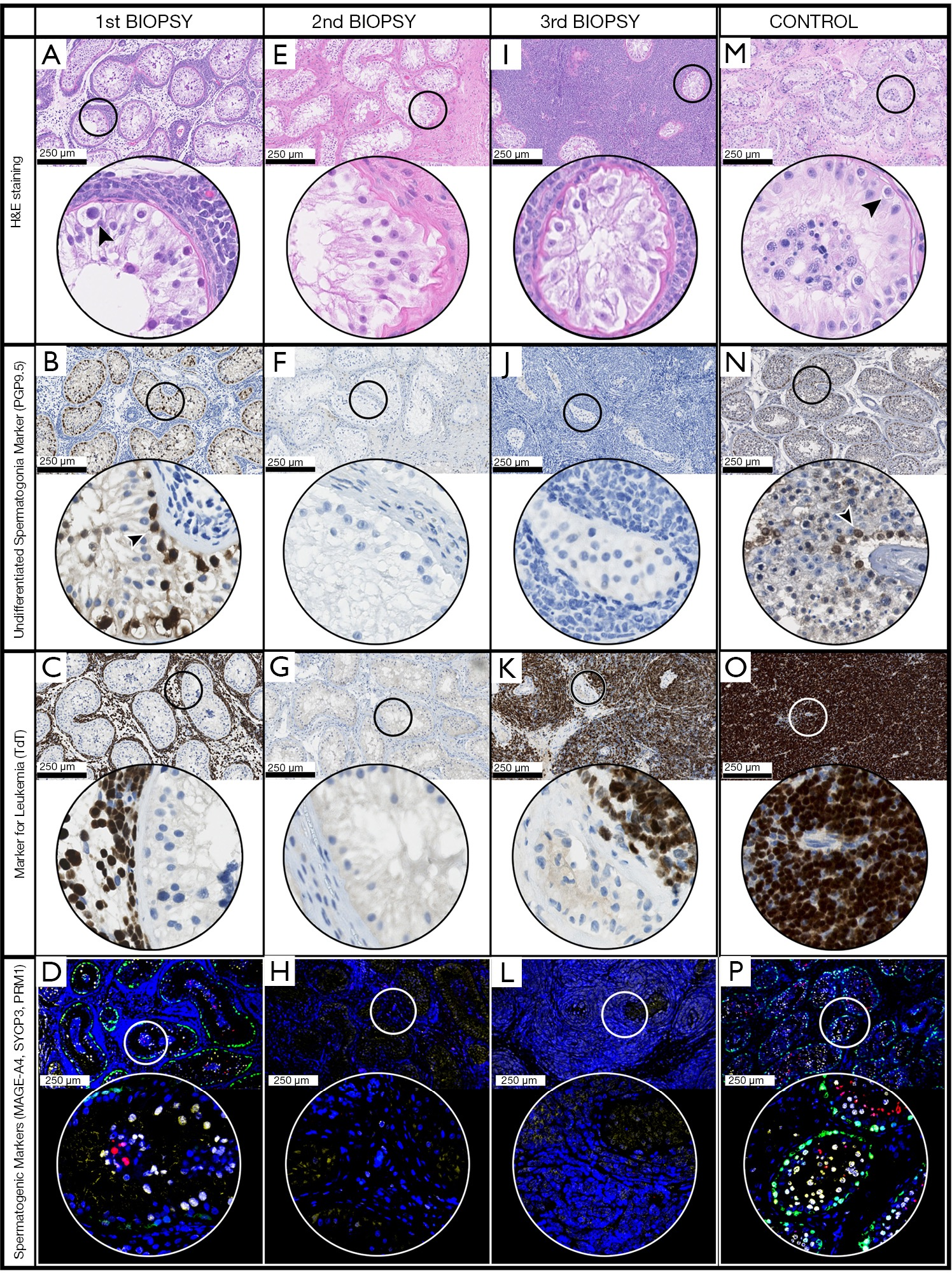 Under the same anesthesia for central line placement and a lumbar puncture, he underwent bilateral testicular biopsies for diagnostic purposes and oncofertility preservation. Testicular tissue showed the presence of germ cells including spermatogonia (Figure 1A,B,D), spermatocyte and round spermatid (Figure 1D). The numbers of the germ cells in the testes was much lower than in healthy age matched testis (Figure 1M,N,P). Hematoxylin and eosin (H&E) and immunohistochemical (IHC) analysis also showed leukemic involvement in the interstitial tissue of the testes without invasion into seminiferous tubules (Figure 1C).

One year later, another testicular biopsy was performed due to further additional asymmetrical enlargement. The second biopsy was unilateral; no germ cells were present, and it was inconclusive for leukemia cells infiltration (Figure 1E,F,G,H). The third biopsy was performed bilaterally 2 months later and confirmed extensive testicular leukemic infiltration and the absence of any germ cells (Figure 1I,J,K,L). Cerebrospinal fluid and bone marrow samples were both negative for ALL at that time.

Two weeks later, he then underwent bilateral orchiectomy. Pathology showed extensive involvement by B-cell lymphoblastic leukemia, and the complete absence of germ cells (data not shown). The timeline illustrating progress of the case is shown in Figure 2. No adverse event related to testes biopsies and orchiectomy were reported. Long term plan is “follow up with patient in andrology clinic for testosterone replacement therapy (TRT) and infertility treatment utilizing stored tissue including both SSC and round spermatid”.

Testicular Tissue Banking for Fertility Preservation in Boys and Men at Risk for Infertility (IRB00021686) was approved and launched in 2014 (11).

An automated alert was received from our electronic medical system (EMS) about a new oncology patient admission. This generated a referral from the Pediatric Oncology team to the Male Reproductive Urology (Andrology) and Regenerative Medicine teams. After consultation with the patient and his family, informed consent and assent forms were signed. Bilateral testicular biopsies were performed by the Surgery team under the same anesthesia utilized for a clinical indication such as central line placement. The testicular tissue was collected for spermatozoa identification, detailed histologic evaluation and cryopreservation (11).

To review the different types of testicular germ cells (i.e., spermatogonia, spermatocyte, round spermatid, elongated spermatid and spermatozoa) and the degree of leukemic infiltration of the testis, H&E staining was performed on Bouin fixed tissue by using a Leica autostainer (Leica Biosystems Inc., ST5010 Autostainer XL). A dedicated urogenital pathologist reviewed all H&E slides to define the spermatogenesis level in preserved tissue, as well as to evaluate for presence of malignant cells.

Fertility preservation for pediatric cancer patients is an evolving field. We are reporting an example of a pre/peripubertal cancer patient who would be eligible for and might benefit from participation in a fertility preservation program. This case also demonstrates the application of our current contemporary assessment techniques for evaluating pediatric fertility and preservation which might be used currently as well as future options for overcoming the lack of elongated spermatids or spermatozoa on biopsy (6,7).

This patient was prepubertal (Tanner stage I) when he was originally diagnosed, therefore not yet able to ejaculate and produce spermatozoa for cryopreservation.

At the time of his original diagnosis (age 11), our testicular tissue banking program for fertility preservation was not yet available, however, he would have been a candidate to undergo a testicular biopsy prior to starting treatment. This way his SSC could be used in the future when stem cell treatments for infertility become available in humans. SSC transplantation has already been successful and led to production of spermatozoa in different species including mouse (12), rabbit (12) and monkey (8,13) but has not yet been successfully accomplished in the humans.

This patient underwent three testicular biopsies when relapse was suspected. The first biopsy showed the presence of some spermatogonia, spermatocytes and round spermatids in his tubules after having gonadotoxic cancer therapy (Figure 1A,B,D). These findings suggest that banking should be offered at any timepoint in the patient’s cancer therapy, even after previously treated with chemotherapy. In this case, given the total lack of germ cells on the third biopsy, it was very important to preserve the testicular tissue prior to the patient’s need for a bilateral orchiectomy.

This patient had confirmed leukemic infiltration in his testes at the time of relapse (Figure 1C,K). One safe option for him would be to culture the SSC present in his testicular tissue to promote propagation (14,15) then mature them in an organotypic culture (16,17). This aims to achieve in-vitro spermatogenesis and spermatozoa production. Subsequently, these in vitro formed spermatozoa could be used for in vitro fertilization (IVF) to avoid the risk of reintroducing leukemia cells to the patient. While in vitro spermatogenesis has been successful in a variety of species, differentiation in the humans has only yielded round spermatids to date (18). Therefore, in vitro spermatogenesis is not yet an applicable clinical tool.

One of the patient’s biopsies showed the presence of round spermatids in his seminiferous tubules (Figure 1D). Round spermatids can successfully be used for injection into activated oocytes, a technique known as round spermatid injection (ROSI). So far, this technique has resulted in over 90 births of healthy babies in Japan (19). Round spermatids could be extracted from cryopreserved testicular tissue to be used for ROSI. In order to bring the ROSI to routine clinical practice, we have recently started the first clinical trial (NCT04298255) in United Stated to test the safety and efficiency of ROSI (20).

The major limitation to this study was the unavailability of data about the state of the testis before starting chemotherapy and before leukemic infiltration. That could provide more information about the effect of chemotherapy on patient’s testes, which would reflect upon our knowledge about the cumulative effect of gonadotoxic therapy.

This report demonstrates the use of contemporary fertility assessment and fertility preservation options for pediatrics male cancer patients. Options for fertility preservation should be tailored according to each case. We recommended consideration of testicular biopsy and SSC banking before starting gonadotoxic treatment, however if pretreatment banking cannot be achieved, i.e., before chemotherapy, banking can potentially still be performed. This should be done on a research protocol, as it is not yet a proven method. This patient still had some undifferentiated spermatogonia and post meiotic germ cells despite being treated with chemotherapy for 3 years. At relapse, this patient had significant leukemic infiltration in his testes. In order to avoid the risk of reintroducing the cancer to the patient after remission, in vitro spermatogenesis and IVF could potentially be the safest option for him when the technology becomes available. Additionally, given the presence of round spermatids on biopsy, ROSI could be a definite option. Options for fertility preservation should be tailored according to each patient’s condition.

Reporting Checklist: The authors have completed the CARE reporting checklist. Available at http://dx.doi.org/10.21037/tau-20-908

Conflicts of Interest: All authors have completed the ICMJE uniform disclosure form (available at http://dx.doi.org/10.21037/tau-20-908). The authors have no conflicts of interest to declare.