Partial nephrectomy is the current gold-standard procedure for the treatment of small renal masses. Since its introduction, robot-assisted partial nephrectomy (RAPN) has rapidly become well-established and widely used. During RAPN, it is important to recognize the relationships between positions of the renal artery and vein, tumor and urinary tract, and the depth of the tumor. Even during initial experiences with this procedure, an accurate understanding of these anatomical structures can enable reductions in the warm ischemic time (WIT), positive surgical margins, and range of resection, which will subsequently help to spare renal function.

Some studies have reported the development and use of three-dimensional (3D) printed models for RAPN (1-6). Although these models are useful for patient education, preoperative planning, and training, limited reports have discussed the effects of their use on clinical outcomes. In a report using 3D-printed soft-tissue physical models as preoperative simulation in 7 cases, it was also reported that bleeding was reduced (3). In this study, we describe the creation of a novel, simple, and inexpensive 3D-printed model of the kidney that contains the minimal anatomical information required for RAPN (e.g., the tumor, artery, vein, and urinary tract) (7). We aimed to determine the usefulness of this model during initial experience with RAPN and whether its use would contribute to the achievement of TRIFECTA, defined as the absence of perioperative complications, positive surgical margins, and a WIT of <25 min.

This retrospective study included all cases of RAPN performed by a single surgeon (TT) at Jichi Medical University Hospital between March 2016 and April 2019. During this period, all RAPN procedures were performed to treat patients with diagnosed clinical T1a renal cell carcinoma (RCC). The following data were collected from medical records of the patients: age, sex, body mass index (BMI), tumor side, tumor size, and R.E.N.A.L. nephrometry scores (10). All patients who were diagnosed with clinical T1a RCC were included in this study, and there were no exclusion criteria. There were 2 cases with a single kidney after nephrectomy. Chronic kidney disease, defined as an estimated glomerular filtration rate (eGFR) <60 mL/min/1.73 m2, was seen in 24.0% of cases.

Fifty cases before the surgeon started the second-generation surgical instruction were set as initial cases and analyzed.

The study was conducted in accordance with the Declaration of Helsinki (as revised in 2013) and the Harmonized Tripartite Guideline for Good Clinical Practice from the International Conference on Harmonization. This study was reviewed and approved by the Institutional Research Review Boards of Jichi Medical University with an opt-out system (No. A19-097). Written informed consent was obtained from all patients.

According to a previous article (7), each final printed model was actual size and had a square-block structure so that the inside could be seen (see Figure 1 for representative images). In the model, arteriovenous arterioles could be reproduced up to the tertiary branches and the branching of the quadratic branches. For each model, the average weight was 115 g, printing time was 22±4.9 h, and creation time was 13±7.7 h. The average total cost of production was US $10. 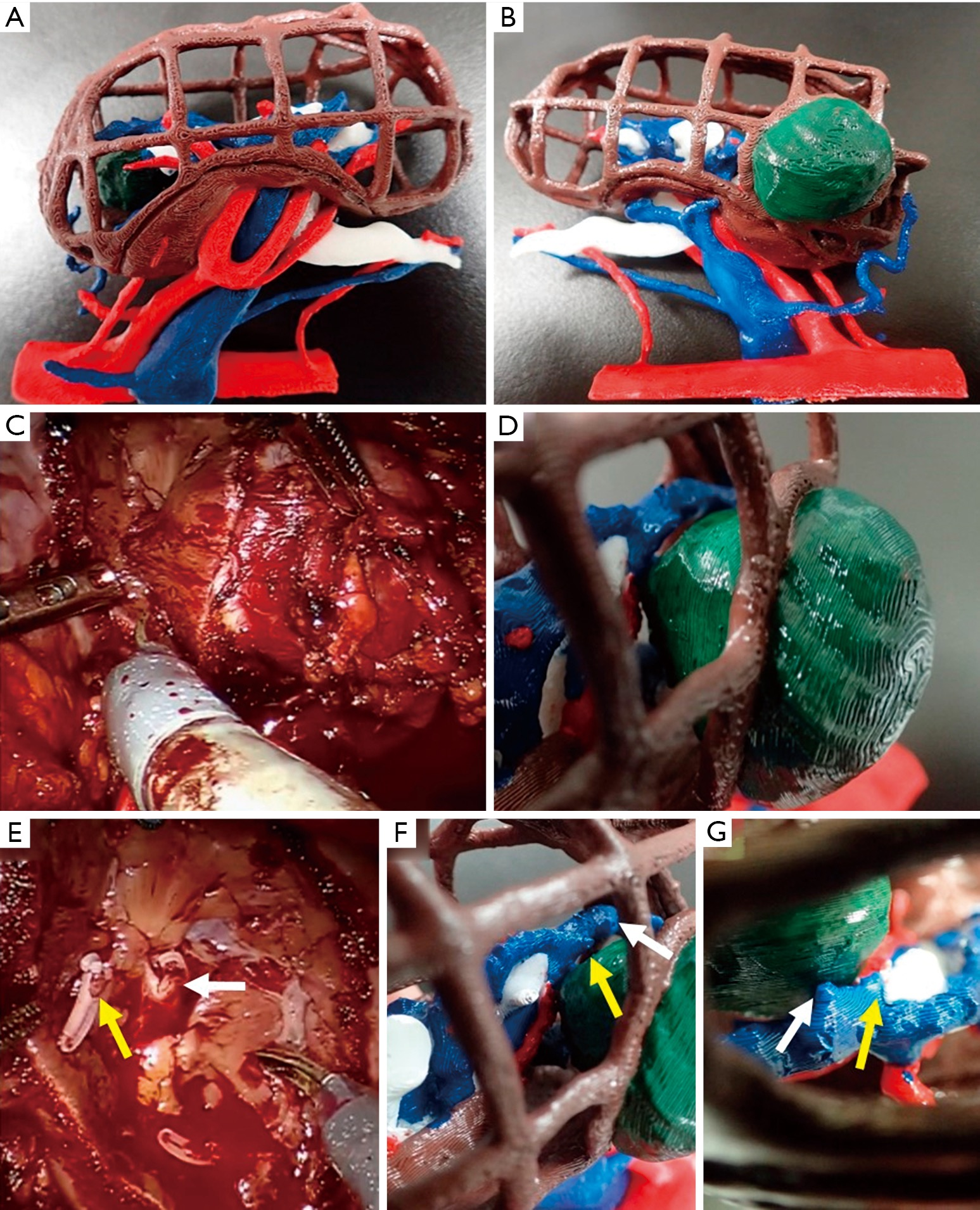 Figure 1 A three-dimensional (3D)-square model. (A, B) Green, brown, red, blue, and white color indicate the renal tumor, kidney, artery, vein, and correcting system, respectively. (C, D) Determining the direction to cut with reference to the 3D model. (E, F) After tumor resection, two clips on the vein (yellow arrow and or white arrow). By using the 3D model, small vessels flowing into the tumor were recognized preoperatively. (G) Due to a grid shape 3D model, blood vessels and the tumor could be confirmed from the opposite side.

All RAPN procedures were performed by a single surgeon with experience in more than 50 open partial nephrectomy and 60 robot-assisted radical prostatectomy procedures. RAPN was performed using the da Vinci Si® surgical system (Intuitive Surgical; Sunnyvale, CA) via the transperitoneal approach, except in cases with a posteriorly located tumor, which were treated via the retroperitoneal approach. The extra device arm was used for all patients, except for those with a small physique. Intraoperative ultrasound examinations were conducted using an ARIETTA 70 probe (Hitachi; Tokyo, Japan). Ultrasound images were observed as picture-on-picture images on the console screen using the TilePRO features of the da Vinci surgical system.

The 3D model was placed next to the console box, and the operator took the model off the console and examined it when needed. During surgery, the 3D model was used mainly to secure the renal artery and mark the tumor resection line by examining it from various angles in his hands. In particular, it was used to identify the location of the main trunk of the renal artery from the viewpoint of the renal vein and to confirm whether the secured renal artery was the main trunk. For entirely entophytic tumors, the tumor position was confirmed based on the 3D model, and the resection line was determined while confirming the positions of the renal calyx and inflowing blood vessels.

Peri- and postoperative outcomes, including console time, WIT, blood loss, tumor volume, transfusion, and complications, were determined for each case. Postoperative complications were graded using the Clavien-Dindo classification (14). Renal function was assessed preoperatively and at 1, 3, 6, and 12 months postoperatively (POM1, 3, 6, and 12, respectively). Renal function was measured using eGFR, calculated using the current equation established for the Japanese population (15). TRIFECTA was defined as described previously (16).

After surgery, the surgeon examined the subjective benefit of the 3D model with a self-assessment form using a scoring system based on a 5-point scale (1= not beneficial; 5= highly beneficial).

Overall, 44 of the 50 patients were diagnosed with malignancies, including 39 with clear cell RCCs and 5 with papillary RCCs, and the remaining 6 patients were diagnosed with benign or other lesion types, including 3 with angiomyolipomas (AMLs), 2 with oncocytomas, and 1 with adrenocortical adenoma. No patients had positive surgical margins. Postoperative contrast-enhanced CT was evaluated in 47 cases except in 1 case of iodine allergy and 2 cases of renal dysfunction. Only one Clavien-Dindo grade >3 complication was reported—a pseudoaneurysm requiring embolism. Accordingly, the TRIFECTA achievement rate was 86.0%.

The surgeon’s evaluation of the effectiveness of the 3D model in RAPN showed an average of 3.48 in all cases. The model was evaluated based on the surgeon’s experience and R.E.N.A.L. nephrometry scores; there were no significant differences among the scores for the items “E”, “N”, “A”, or “L”.

Table 2 compared clinical characteristics and perioperative outcomes according to R.E.N.A.L nephrometry scores and the surgeon’s level of experience. Notably, the only significant difference involved blood loss volumes between the low- and intermediate-/high-risk R.E.N.A.L nephrometry score groups. There were no significant differences in clinical characteristics or perioperative results depending on the approach (transperitoneal or retroperitoneal).

As noted above, few reports have discussed the impacts of 3D-printed renal tumor models on the clinical outcomes of patients. In this study, therefore, we investigated the effects of such models on peri- and postoperative outcomes of RAPN. During a 2-year period, we created 3D models for 50 patients with T1a kidney tumors and achieved a TRIFECTA rate of 86.0%. Our 3D model can be created inexpensively using a commercially available 3D printer and contains the minimum information required for performing RAPN (7).

Surgeons may require experience with as many as 20 cases of robotic surgery before approaching an optimized console time, whereas more than 30 cases may be needed to achieve a decrease in WIT (17). In a previous report of 99 cases by Buffi et al. (18), the TRIFECTA achievement rate improved to 66.7% during the initial 33 cases and to 87.9% in the latter 33 cases, suggesting an effect of surgical experience. In contrast, we observed no significant difference in the achievement of TRIFECTA when we compared the initial and latter 25 cases in our study, as shown in Table 2. We suggest that preoperatively, the 3D model can be taken many times to stereoscopically image tumor dissection as described above, hemostasis of blood vessels flowing to the dissection surface, and repair of the opened urinary tract. This prior realistic image training can compensate for a relative lack of surgical experience.

We further note that all cases in our sample had negative surgical margins and experienced minimal postoperative reductions in renal function. We attribute these good outcomes to the ability to set an appropriate resection line in each case according to the grid shape in this model while avoiding resection of the normal surplus renal parenchyma. Moreover, we did not observe any significant difference in the achievement of TRIFECTA when we stratified cases by R.E.N.A.L nephrometry scores. Given the small number (n=4) of cases with high-risk R.E.N.A.L. nephrometry scores, we combined these together with the moderate-risk score cases. However, we note that TRIFECTA was achieved in all four high-risk cases. This result suggests that the 3D model enables the achievement of TRIFECTA even when a highly complex tumor is treated by a less-experienced surgeon.

In Table 3, we present the TRIFECTA achievement rates reported for previous series of approximately 100 cases (18-22). Previously, the hospital and surgeon volumes were identified as factors that strongly influenced the achievement of TRIFECTA during RAPN (23). However, we achieved comparable results with a surgeon without prior experience at a lower-volume institution. Our findings suggest that this 3D model is useful for institutions with a smaller number of cases and less-experienced surgeons.

The present study had several limitations. First, this was a retrospective study conducted at a single institution. Further large-scale prospective studies will be needed to confirm our outcomes. Second, the study featured a single-arm design and thus lacked a control arm without a 3D model. Third, urologists and radiological technologists were involved in the creation of the models used in this study. However, generalization would require a system that can be used by all technicians.

In conclusion, the present study demonstrated that the use of a simple and inexpensive 3D square-block-type kidney model during RAPN led to a high TRIFECTA achievement rate, regardless of the surgeon’s experience level. Future studies involving larger numbers of cases and surgeons are warranted.

Reporting Checklist: The authors have completed the STROBE reporting checklist. Available at http://dx.doi.org/10.21037/tau-20-927

Conflicts of Interest: All authors have completed the ICMJE uniform disclosure form (available at http://dx.doi.org/10.21037/tau-20-927). The authors have no conflicts of interest to declare.

Ethical Statement: The authors are accountable for all aspects of the work in ensuring that questions related to the accuracy or integrity of any part of the work are appropriately investigated and resolved. The study was conducted in accordance with the Declaration of Helsinki (as revised in 2013) and the Harmonized Tripartite Guideline for Good Clinical Practice from the International Conference on Harmonization. This study was reviewed and approved by the Institutional Research Review Boards of Jichi Medical University with an opt-out system (No. A19-097). Written informed consent was obtained from all patients.