Overactive bladder (OAB) is a common disease in urology and is defined by the International Continence Society as urinary urgency usually with urination frequency, with or without urgent urinary incontinence and without any urinary tract infection or other obvious pathological changes (1). The syndrome has become an increasingly serious problem worldwide. It is estimated that the prevalence rate of OAB among American adults is approximately 16.9% and increases with age (2). In China, the prevalence of OAB in adults is between 4.7% and 6.0%; among these adults, 19.9% are over the age of 40 years (3). The disease negatively affects patients’ quality of life (QoL) and increases the socio-economic health burden.

Electrical stimulation therapy has been used for more than 50 years since its first application by Caldwell for the treatment of urinary symptoms in 1963 (4). Current studies have shown that sacral neuromodulation (SNM) is a safer and more effective treatment for OAB in patients who are unresponsive to traditional conservative treatments (5,6). However, there is still a considerable proportion of patients who have previously undergone SNM treatment and still experience either recurrent symptoms or weakening of the degree of symptom improvement over time (7,8). Existing treatments for these patients include combining oral drugs; adjusting the stimulation frequency, intensity, and time; and other program-controlled methods. However, there are some patients (defined as black-zone patients) in whom none of the above treatment options are sufficiently effective in achieving targeted symptom reduction.

The successful development of a new type of SNM system (PINS, Beijing, China) with variable frequency stimulation (VFS) function has provided a new direction for the diagnosis and treatment of black-zone OAB patients. In March 2020, our hospital provided VFS-SNM to a black-zone OAB patient, and the ensuing follow-up outcomes were promising. In this report, we discuss the efficacy of using VFS-SNM over constant frequency stimulation (CFS)-SNM in the treatment of a black-zone OAB patient. We present the following case in accordance with the CARE reporting checklist (available at http://dx.doi.org/10.21037/tau-20-889).

A 50-year-old male patient presented to our hospital with frequent urination and nocturia for more than 10 years and progressive aggravation of symptoms for 3 years. Oral drugs, behavioral therapy, and other conservative treatments had been ineffective. In October 2016, after obtaining informed consent from the patient, SNM (PINS, G131) was performed. Two years later, the patient’s symptoms had worsened. Upon treatment with CFS-SNM, the patient was still urinating up to 11 times in day and 3 times at night; the patient remained dissatisfied even after multiple medication and program-controlled parameter adjustments. Hence, we upgraded the patient to the VFS-SNM program in March 2020 and followed-up on his progress through the telephone for 2 weeks after the treatment. Our results show a significant improvement in the symptoms and scores from those obtained after the CFS-SNM treatment. Furthermore, there were no operation-related complications.

We evaluated the OABSS (9) and OAB-QoL scores (10) of the patient at three stages [before SNM (baseline), after CFS-SNM, and after VFS-SNM]. An interference question on the OAB-QoL, “Overall, how much do your urinary symptoms interfere with your everyday life?”, was measured on a scale from 0 to 10. The two stimulation modes used in this case study were negative stimulation modes. The scores in all three stages and the detailed parameters of different stimulation modes are shown in Tables 1,2.

Both stimulation methods were found to significantly reduce the OABSS; compared with the baseline, the improvement rate after CFS-SNM was 30% and that after VFS-SNM was 50%. Further, VFS-SNM significantly improved both the daytime and nocturnal urination frequency. The score for Question 1 (daytime frequency) decreased from 2 points at baseline to 0 points after VFS-SNM, whereas the score for Question 2 (nocturnal frequency) decreased from 3 to 2 points. In contrast, the CFS-SNM treatment was less effective in improving these symptoms (the Q1 score decreased from 2 points to 1 point, and the Q2 score remained at 3 points). Moreover, on comparing the OAB-QoL scores, we found that VFS-SNM significantly reduced the patient’s OAB-QoL score. The improvement rate of OAB-QoL score after VFS-SNM treatment was 62.5%, while that after CFS-SNM was only 37.5%. The timeline picture was shown in Figure 1.

SNM has been used in the treatment of OAB for more than 10 years. With the rapid development of SNM therapy, it has become more popular in China in the past 4 years. However, there is still a considerable proportion of patients who receive SNM but cannot achieve satisfactory clinical efficacy after repeated treatments. We define these as black-zone patients. Effective treatment of these patients remains problematic for urologists.

Jia et al. of Tsinghua University first proposed VFS in 2015. In their study, patients with Parkinson’s disease received subthalamic nucleus-deep-brain stimulation after which the postoperative symptoms were analyzed. Even after repeatedly adjusting the stimulation parameters, when the improvement of clinical symptoms was not obvious, they attempted to use VFS at 60 Hz for 20 s and at 130 Hz for 30 s per cycle. Their results showed that VFS can significantly improve the clinical symptoms in patients more effectively than the traditional CFS (11). Similar conclusions were subsequently drawn by Wang et al. (12). In a more recent study, Jia et al. performed a randomized controlled trial to compare variable and constant frequency deep-brain stimulation for treating patients with advanced Parkinson’s disease (13). Based on these studies, we hypothesized that VFS could be applied to the field of urology, particularly in the case of black-zone patients, and may enable clinicians to obtain better postoperative results.

In our case, the patient’s symptoms improved more satisfactorily because the VFS-SNM controlled the frequency of urination within the range deemed acceptable by the patient, which greatly improved the QoL. After a thorough literature search, we found that ours was likely the first study to apply VFS-SNM for the treatment of urological diseases. Therefore, to improve the use of VFS in the clinical environment, we have explained the technology of the VFS-SNM system below.

VFS does not strictly refer to the alternation of high- and low-frequency bands; it can also be the alternation of relatively high and low frequency. The duration of frequency band stimulation is also one of the parameters that need to be adjusted. The main technical parameters of VFS are set as follows: frequency range, 2–250 Hz (62 levels adjustable); and duration of each frequency point, 0.1 s–24 h (145 levels adjustable). In the same program group, alternate stimulation can be performed at 1 to 5 different frequency points. The new SNM system with VFS function (PINS, Beijing, China) diversifies the selection of the programmed parameters and is expected to further improve the curative effect. 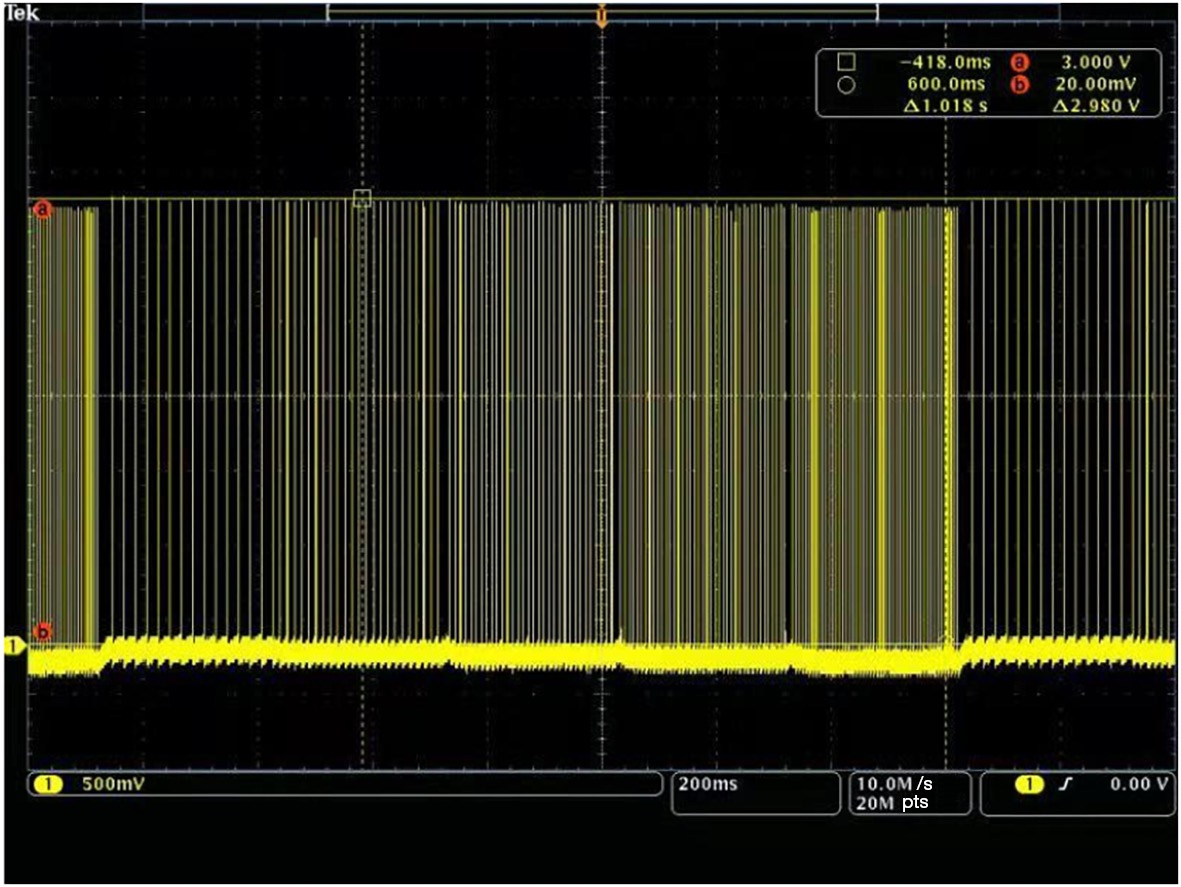 Fasano et al. (14) indicated that frequency modulation is the encoding of information in a carrier wave by varying the instantaneous frequency of the wave. In our study, the beneficial results lasted for 2 weeks. Based on our observations of this patient, we believe that for patients who have been treated with relatively low-frequency stimulation for a long time, two different frequencies of stimulation can be carried out in this low-frequency band when performing the VFS-SNM. The frequencies are selected based on the patient’s subjective sense of stimulation. After the patient adapts to the low-frequency band, the frequency is gradually increased to a relatively higher band to avoid sudden fluctuations in the patient’s symptoms as a result of the sudden increase in stimulation parameters. We expect a gradual adaptation of the patients to this new treatment model.

This study has some limitations. First, as this was a case report, the findings cannot be generalized. Second, the follow-up time was quite short; therefore, the long-term effectiveness and safety of VFS-SNM could not be determined. Last, our study failed to clarify the potential mechanism of VFS-SNM in improving symptoms in the black-zone OAB patients. Further randomized controlled trials with large samples are needed to provide a more convincing evidence base for the treatment of these patients.

We report the first known use of VFS-SNM technology for the treatment of a urological disease with satisfactory results. VFS-SNM was not inferior to CFS-SNM in the treatment of black-zone OAB patients. Our research team is currently conducting a randomized controlled study on the effectiveness and safety of VFS-SNM that aims at verifying the efficacy of VFS-SNM and improving the operating specifications, while providing new treatment ideas and methods for urological diseases.

Reporting Checklist: The authors have completed the CARE reporting checklist. Available at http://dx.doi.org/10.21037/tau-20-889

Conflicts of Interest: All authors have completed the ICMJE uniform disclosure form (available at http://dx.doi.org/10.21037/tau-20-889). The authors have no conflicts of interest to declare.