Novel mutations in response to vitamin B6 in primary hyperoxaluria type 1 after only kidney transplantation: a case report

Primary hyperoxaluria type 1 (PH1, OMIM Number: #604285) is considered an autosomal recessive hereditary disease, caused by mutations in gene AGXT and deficiency of liver-specific alanine-glyoxylate-aminotransferase (AGT) (1). The deficiency of AGT leads to massive accumulation of glyoxylate, which is rapidly converted to oxalate, generating calcium oxalate crystals after its reaction with calcium, a harmful end-product of human metabolism in the blood and kidneys. PH1 is the most common and harmful type of PHs (PH1, PH2, and PH3) (2). Approximately 70–80% of the cases with PH1 with delayed treatment develop into end-stage renal disease (ESRD) due to the persistent calcium oxalate crystal accumulation in the renal tubular cells and the renal interstitium (3). The clinical manifestations of PH1 include lithangiuria, renal calcareous deposition, and kidney damage. Serum oxalate analysis, urinary sediment analysis, and AGXT gene mutations sequencing can be used for diagnosis of PH1. Combined liver-kidney transplantation is considered the mainstream curative treatment (4-6).

A recent study revealed that abnormal post-transcriptional regulation by microRNAs results in reduced AGT activity (7). However, mutations, especially missense mutations in gene AGXT were found to be the major cause of PH1 (8). More than 150 functional mutations in the AGXT gene have been reported until now. Most of these mutations influence mainly protein folding, dimerization, and intracellular localization, thereby leading to AGT deficiency (9, 10). Dimerization is considered a crucial event that influences protein stability and intracellular fate (11). As an essential cofactor of AGT, pyridoxal phosphate (PLP) has been confirmed to be necessary for dimerization and protein stability at the protein and cellular levels. Vitamin B6 (B6) is a precursor of the PLP coenzyme; therefore, it can increase the plasmatic concentration of PLP and contribute to the dimerization and stability of AGT (12). In fact, B6 has been already used for almost 50 years. Compared with liver-kidney transplantation, B6 is a cheaper and more viable option for patients. A prospective clinical trial confirmed the efficacy of B6 application in 50% of the patients with particular mutations in the AGXT gene, mainly those with G170R and F152I (13). Another in vitro study also verified that B6 treatment exerted effects on R36H, G42E, I56N, and G63R (11). However, evidence of the response to B6 treatment in these genotypes is still lacking.

The published reports of PH1 in the Chinese population are scarce. It is noteworthy that significant heterogeneity exists in PH1 between Chinese and Western genotypes. On the other hand, it is still unclear whether B6 can be used as effective salvage therapy in PH1 patients receiving only kidney transplantation.

A 52-year-old man presented to our center in 2016 with frequent stone events and ESRD; he had subsequently undergone kidney transplantation. Sudden rising of serum creatinine within two months after the transplantation prompted AGXT gene mutations sequencing, which revealed the presence of A186V, R197Q, and I340M. The patient was diagnosed with PH1 and received B6 treatment. Below, we present the following article in accordance with the CARE reporting checklist (available at http://dx.doi.org/10.21037/tau-20-979).

A 52-year-old Chinese man with a ten-year history of hypertension and multiple bilateral renal stones presented to our center. His serum creatinine was around 515 µmol/L at hospitalization had regular dialysis for three months without receiving any drugs or therapy for stone prevention. The progression of his kidney disease over time before the transplantation is displayed in Figure S1.

The patient subsequently received (deceased) allogeneic transplantation on August 31, 2016. The clinical characteristics of the donor are presented in Table 1. The detailed immunosuppressive regimen after the transplantation was oral tacrolimus (3 mg bid), Myfortic (540 mg bid) and Prednisone (10 mg qd). The plasma concentration of tacrolimus was maintained between 7 and 8 ng/mL. The patient’s serum creatinine descended to 103 µmol/L 19 days after the transplantation, and he successfully recovered. 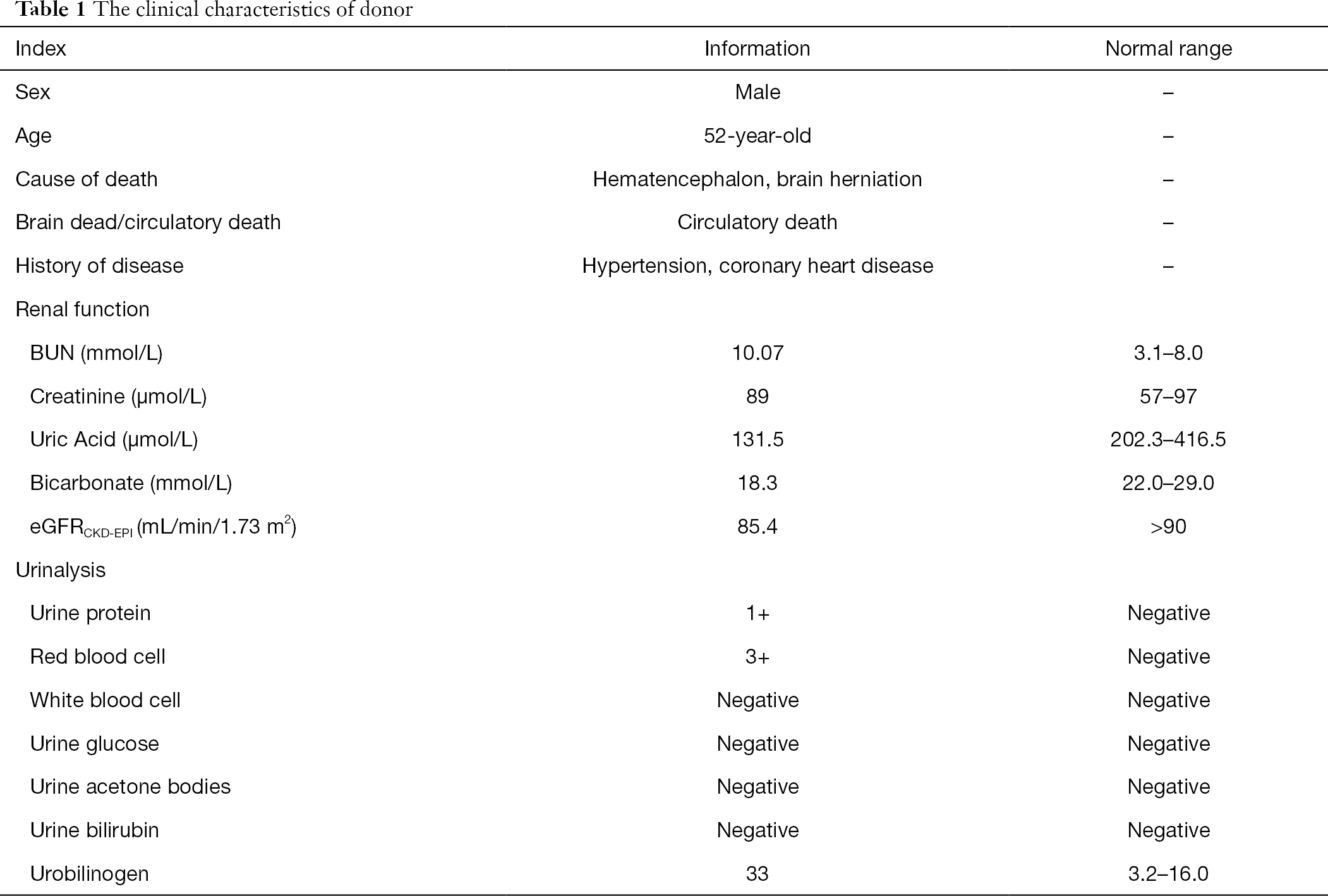 The patient presented to our center to have reexamination, and we found that the serum creatinine was suddenly augmented to 193 µmol/L. A subsequent color Doppler ultrasound examination of the renal allograft revealed elevated echogenicity and deposition around the double-J catheter. Allograft stones were suspected. Twenty-four-hour urine oxalate and calcium excretions were significantly elevated to 93.7 mg/24 h (reference value between 8.19 and 41.04 mg/24 h) and 594.6 mg/24 h (reference value between 108 and 300 mg/24 h), respectively (Table 2). These findings suggested a suspected diagnosis of PH1, which was further confirmed after genetic sequencing which detected three complicated mutations in gene AGXT (A186V, R197Q, and I340M) (14) (Figure S2). The patient’s parents were deceased and the genetic testing of his four brothers and sisters revealed that one of his sisters carried the mutations A186V and R197Q, whereas the other one carried the mutation I340M. Two sisters with heterozygous variations were asymptomatic. The pathogenicity was identified in our previous study (13). Fortunately, a subsequent renal allograft biopsy did not reveal distinct calcium oxalate crystals (Figure 1A,B,C). Furthermore, the biopsy found no BK virus infection (Figure 1D,E,F). Based on this evidence, we recommended liver transplantation as a curative treatment for PH1. Oral B6 therapy (50 mg tid) was started during the waiting period. Meanwhile, potassium sodium hydrogen citrate granules (MADAUS GmbH, Germany) were prescribed as therapy in addition to vitamin B6 administration. Surprisingly, during the 4-week treatment by oral B6 intake, the serum creatinine of the patient was reduced to 145 µmol/L. Furthermore, the indexes of twenty-four-hour urine oxalate and calcium excretions were normal. Therefore, the patient decided to deselect waiting for liver transplantation; he was advised to maintain oral B6 treatment. We adjusted the drug dose to 50 mg bid one year post-transplantation. At the final follow-up (after almost three years), his serum creatinine remained as low as 130 mmol/L. Therefore, we concluded that the patient responded positively to the B6 treatment. A timeline of interventions and outcomes was showed in Figure 2. 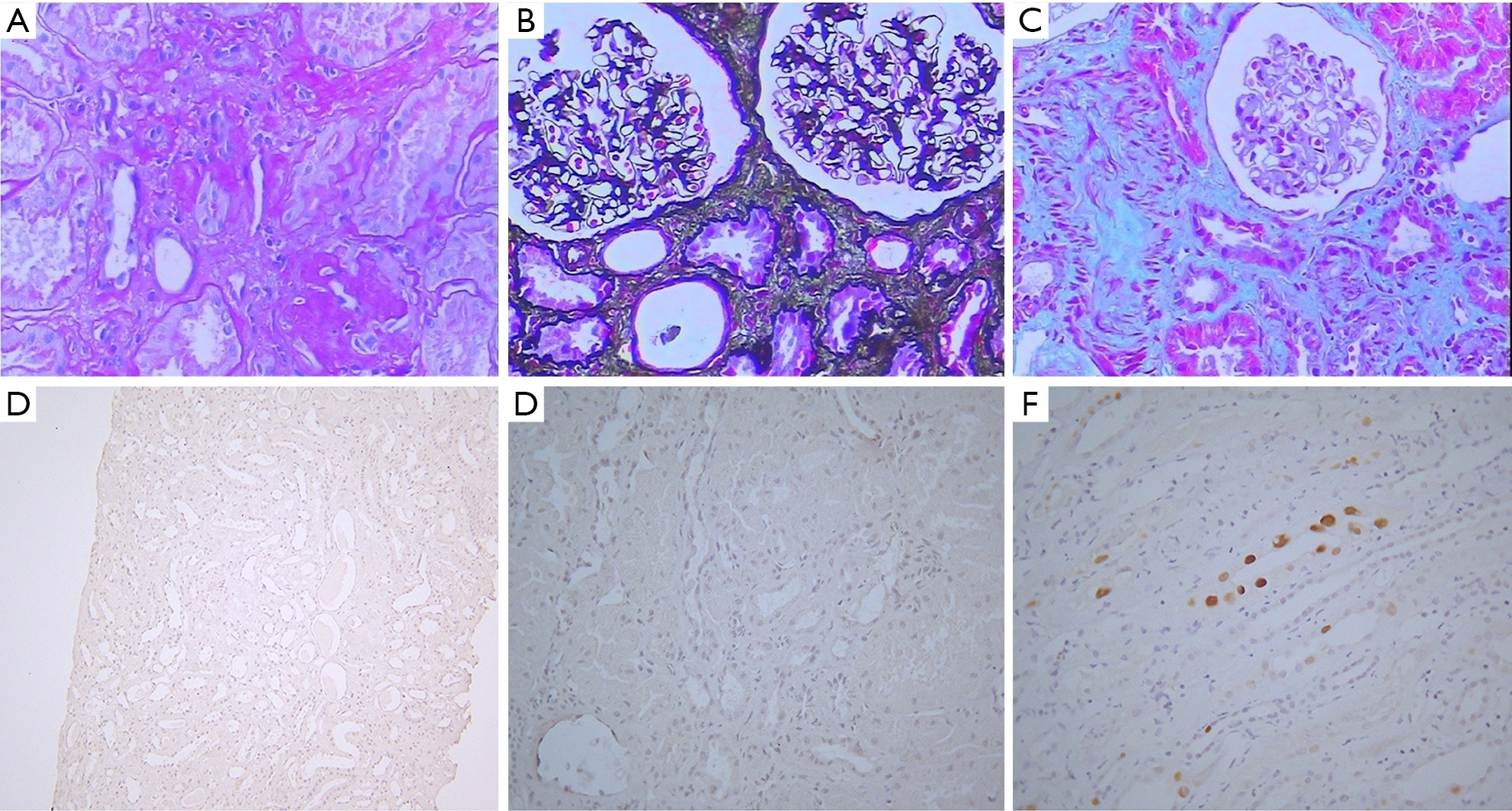 Figure 2 Timeline of interventions and outcomes.

This study was approved by the appropriate local institutional review boards on human subject research at the Tongji Hospital of Huazhong University of Science and Technology. All procedures performed in studies involving human participants were in accordance with the ethical standards of the institutional and/or national research committee(s) and with the Helsinki Declaration (as revised in 2013). Written informed consent was obtained from the patient.

In our case, we report an adult patient with PH1 diagnosed through genetic sequencing, who had elevated serum creatinine after kidney transplantation. Kidney allograft failure would have occurred inevitably without treatment. Whether performing liver transplantation or kidney-transplantation depend on if the renal injury is invertible. The renal allograft biopsy of this patient did not show distinct calcium oxalate crystals in the renal tubules and renal interstitium or acute/chronic rejection. Recently, the timely liver transplantation was the mainstream curative treatment. During this period, we used B6 for therapy to avoid deterioration. Surprisingly, in this case, the 4-week oral B6 therapy (50 mg tid) reduced the serum creatinine of the patient from 194 to 145 µmol/L, which revealed the positive response of this patient to the B6 treatment. Due to the high cost of liver transplantation and the increased risk of complications, the patient considered to refuse liver transplantation but continued his B6 therapy. At the three-year follow-up, the patient’s serum creatinine remained reduced to 130 mmol/L, without urinary excretion of oxalate. In this case, we used B6 as a retrospective therapeutic choice for PH1 treatment after kidney transplantation. Although kidney-liver transplantation is the only curative treatment for PH1, potential problems, such as the high cost and risks of surgery and inadequacy in infants with severe PH1, have negatively affected its wide application (15). Therefore, other feasible therapies such as cell therapy and RNAi and B6 treatment have been developed (13,16). Compared with cell and RNAi therapy, which have not been used in clinic, B6 has been applied in PH1 for almost 50 years. That was the reason we considered B6 treatment worthwhile in this case.

On the other hand, only a part of patients with specific mutations in gene AGXT (G170R, I244T, and F152I) are sensitive to B6 treatment. There is no clinical case to present additional B6-sensitive mutations to our knowledge. Actually, as a precursor of the PLP coenzyme of AGT, B6 has been confirmed to contribute to the dimerization and stability of AGT. Except for mutations which involve residues directly interacting with PLP, such as S81L, G82E, H83R, W108R, S158L, and D183N, most mutations should be sensitive to B6 treatment in theory (11). The mutations A186V, R197Q, and I340M in our report were all out of the PLP-binding domain. Hence, it was reasonable that the patient would respond to B6 therapy. In fact, only kidney transplantation can be considered as an option in individuals who respond to B6 treatment (15). A long-time follow-up was certainly necessary in this case. Meanwhile, considering the existing significant individual heterogeneity in B6 efficacy and genotype-phenotype correlations, we speculated that only kidney transplantation needs to be discreetly carried out even in patients with ERSD that were with confirmed responsiveness to B6.

It has been long challenging to separate PHs form kidney stones because of its clinical heterogeneity (5). In fact, the patient in our case suffered from inherited polycystic kidney, which was usually accompanied by multiple bilateral renal stones. Based on his family history, renal transplantation was performed without considering other diseases such as PHs. Furthermore, in mainland China, due to the limit of knowledge and experience, only several cases of PH1 have been reported, and their epidemiology remains unclear. In our previous study, we investigated several patients with PH1 who were diagnosed with the disease after kidney allograft failure (14). Recently, genetic screening has been used as the most effective method for diagnosis of PH1. Based on our previous clinical experience, we considered it was necessary to perform PHs-related gene screening in patients with stubborn bilateral kidney stones and renal dysfunction of undetermined etiology.

We were the first to observe that a patient that carried multiple mutations (A186V, R197Q, and I340M) was responsive to B6 treatment. Therefore, B6 therapy can be worthwhile as rescue therapy for patients with confirmed PH1 after only kidney transplantation. However, the study included only one case, and future studies with larger sample sizes are needed to further validate our finding in the recent study.

From my perspective as a patient, the article by Zhao et al. provides an interesting finding that carried novel multiple mutations (A186V, R197Q, and I340M) was responsive to B6 treatment. More cases should be collected to clarify the situation.

Funding: This study was supported by grants from the Science and Technology Foundation of Hubei Province (2019CFB659), the National Natural Science Foundation of China (81700300, 30772038), and the Non-Profit Central Research Institute Fund of Chinese Academy of Medical Sciences (2017PT32007).

Reporting Checklist: The authors have completed the CARE reporting checklist. Available at http://dx.doi.org/10.21037/tau-20-979

Conflicts of Interest: All authors have completed the ICMJE uniform disclosure form (available at http://dx.doi.org/10.21037/tau-20-979). The authors have no conflicts of interest to declare.

Ethical Statement: The authors are accountable for all aspects of the work in ensuring that questions related to the accuracy or integrity of any part of the work are appropriately investigated and resolved. This study was approved by the appropriate local institutional review boards on human subject research at the Tongji Hospital of Huazhong University of Science and Technology. All procedures performed in studies involving human participants were in accordance with the ethical standards of the institutional and/or national research committee(s) and with the Helsinki Declaration (as revised in 2013). Written informed consent was obtained from the patient.