Most male testicular tumors are mainly germ cell tumors (1,2). The incidence of sex cord-stromal tumors is low, accounting for about 4–6% of all testicular tumors (3,4). Mixed sex cord-stromal tumors (MSCSTs) are rarer, currently only four cases of mixed adult granulosa cell tumor (AGCT) with Sertoli cell tumor have been reported in the literature (3,5-7). This article summarizes the clinical, ultrasonic and histopathological features of this case. We present the following case in accordance with the CARE Guideline (8) (available at http://dx.doi.org/10.21037/tau-20-795).

A 49-year-old man was admitted to the hospital with “left testicular bloating and dull pain for 20 years, aggravating for 10 days”. Twenty years ago, the patient had no obvious incentive to develop discomfort and dull pain in the left testis, which can be relieved after rest, but no relief after application of anti-inflammatory drugs. After that, the above symptoms persisted and did not change significantly. Symptoms have worsened in the past 10 days. The patient denied other medical histories. He came to the hospital for further systematic diagnosis and treatment.

Physical examination revealed that the left testis was palpable, enlarged compared to the contralateral testis, hard in texture, obvious in weight, smooth in the surface, no abnormal nodules were touched, no obvious tenderness, and negative in light transmission test. The size of the contralateral testis was normal. The bilateral epididymis and vas deferens were no abnormalities.

Scrotal color Doppler ultrasound (Figure 1): the sizes of both testes and epididymides were normal, the outlines were regular and neat, the internal echoes were fine and uniform, and color flow signals could be seen in both testes. The bilateral spermatic veins were not widened. Anechoic areas were seen in both epididymides, the largest one was about 0.67 cm × 0.46 cm. There was a 1.09 cm × 0.79 cm low echo with clear outline in the left testis, and color flow signals can be seen inside. And there was an anechoic area in the left scrotum with a depth of about 0.63 cm. Examination opinions: a space-occupying lesion in the left testis, cysts in the epididymis, and left testicular hydrocele. Laboratory results revealed the serum carbohydrate antigen 19-9 (CA19-9) was 57.5 U/mL (normal <27 U/mL), and other markers were normal.

Figure 1 Ultrasound images of this case. Ultrasound revealed a 1.09 cm × 0.79 cm low echo with clear outline in the left testis (A), and colorful blood flow can be seen inside (B).

Based on the results of imaging and laboratory examinations, the tumor was diagnosed as a testicular tumor, and seminoma was highly likely. A radical left orchiectomy was performed on this patient. The patient recovered well after surgery and discharged with the consent of the attending physician. He had not received other treatments after the operation. He was in good condition and had no evidence of recurrence or metastasis. The timeline picture was shown in Figure 2.

Grossly, the tumor was located in the left testis with clear boundaries. The size of the tumor was about 1.0 cm × 0.7 cm. The cut surface was tan-white, and the texture was medium.

Histologically, the tumor was composed of two components, 90% were AGCTs and 10% were Sertoli cell tumors (Figure 3). In the AGCT areas, the tumor cells were densely arranged in diffuse or island shapes, and Call-Exner-like structures could be seen locally. The cytoplasm was lightly stained, and some nuclei were pale and ground-glass-like with grooves, and no necrosis and pathological mitotic figures were seen. The tumor cells in the Sertoli cell tumor areas were tubular differentiated. And the cells were more uniform in size with less cytoplasm and deep nuclear staining. Obvious fibrous components were found in the stroma, and normal intrinsic seminiferous tubules and germ cells could be found. 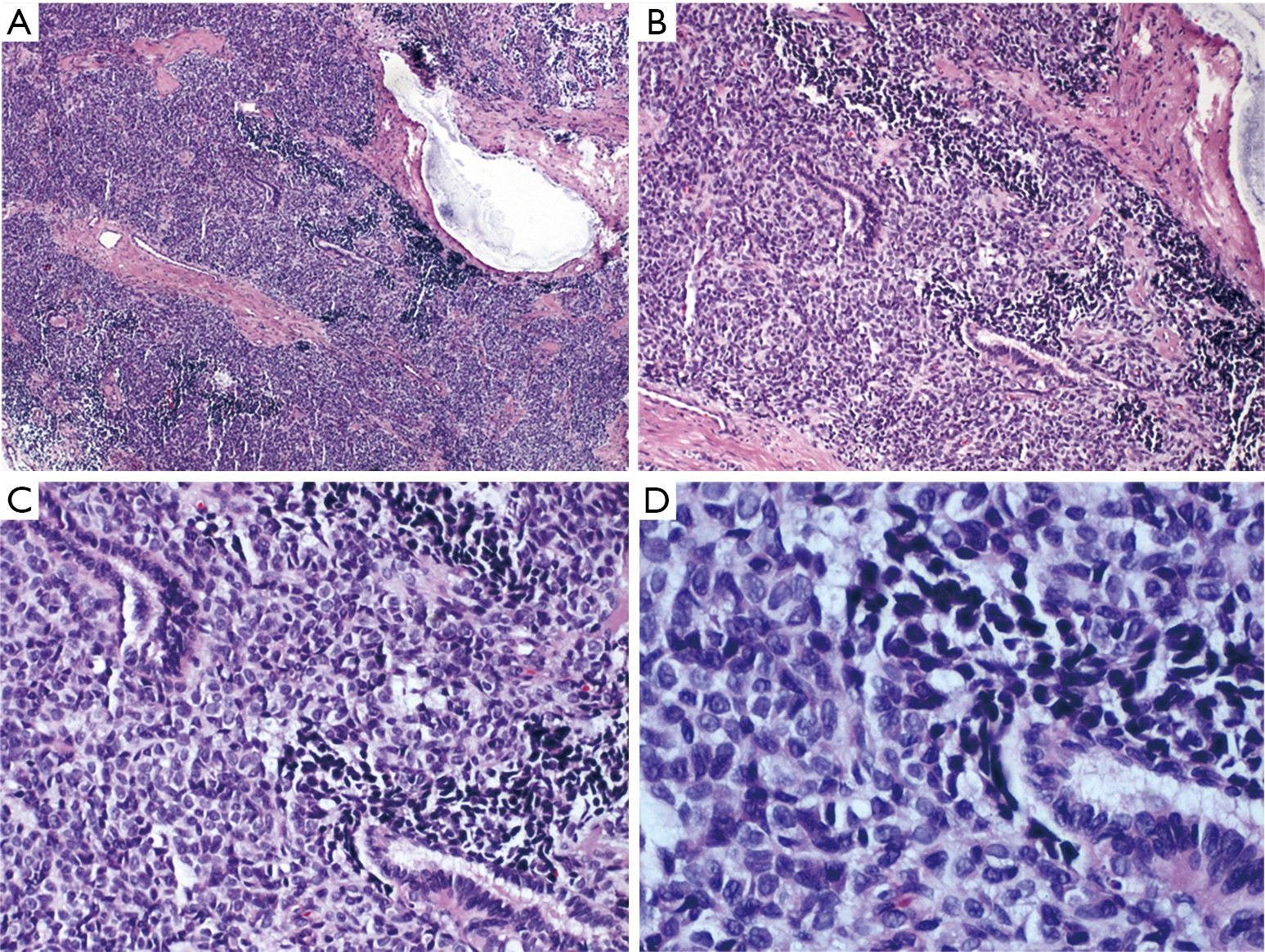 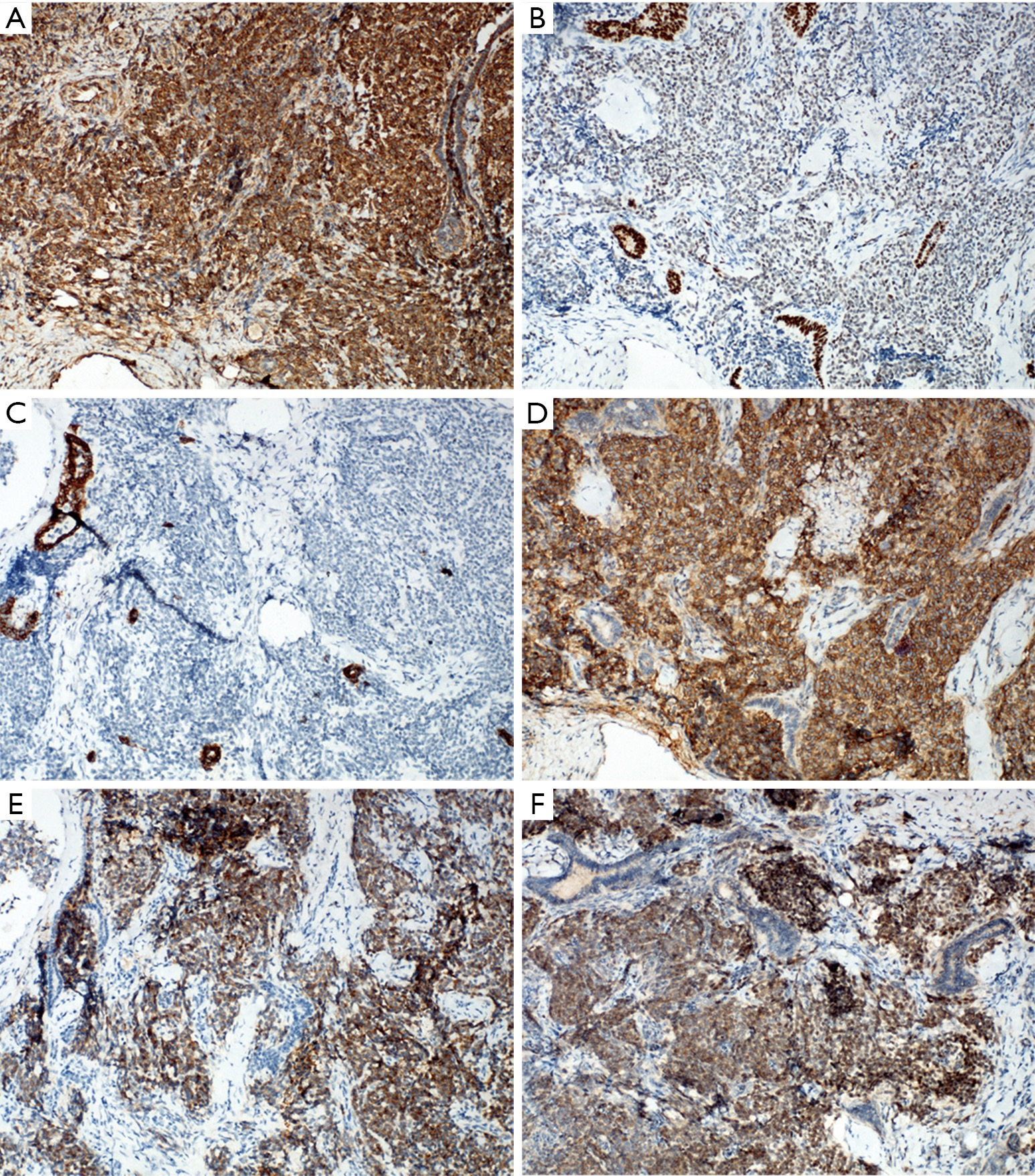 The postoperative pathological diagnosis was MSCST (AGCT with Sertoli cell tumor). The prognosis of this tumor is low-grade malignant tumor, with a certain risk of recurrence and metastasis.

According to the patient’s clinical information, ultrasonic features, histological features and immunohistochemical staining, the tumor was diagnosed as MSCST. Sex cord-stromal tumors mainly include Leydig cell tumors, Sertoli cell tumors, granulosa cell tumors, and also include mixed forms (which can be composed of any of the above types) and incompletely differentiated tumors (7). In the WHO classification 2016 of testicular non-germ cell tumors, the subgroups of “mixed” and “incompletely differentiated” forms of sex cord-stromal tumors have been replaced by “mixed and unclassified sex cord-stromal tumors” (9). MSCSTs refer to tumors containing two or more sex cord-stromal components. The incidence is extremely rare. They often occur in middle-aged and elderly men and show swelling or masses of testes. However, the immunohistochemical characteristics of each component of the tumors are consistent with their tumor types, which can help to identify. In addition, reticular fiber staining can also help define the diagnosis.

Gonadoblastomas consist of two cell types: germ cells [which can be similar to germ cell neoplasia in situ (GCNIS) cells] and sex cord cells similar to immature granulosa cells. The tumor cells of gonadoblastomas are often scattered in nests, with eosinophilic basement membrane material (10). GCNIS-like cells have clear cytoplasm and polygonal nuclei, with one or more prominent nucleoli. Other germ cells may have the morphological characteristics of spermatogonia, with less cytoplasm, granular chromatin, and insignificant nucleoli. Immunohistochemical results are often positive for PLAP, OCT3/4, and SALL-4. The sex cord cells have angulated nuclei with little cytoplasm, which can be nested, or surrounded by basement membrane deposits (Call-Exner-like pattern) or arranged around germ cells. Common positive immunohistochemical markers are WT1, inhibin-α and CD99.

Tumors are composed of Sertoli cells and Leydig cells in different proportions. There may be primitive gonad-stromal components and sometimes heterogeneous components in the medium-differentiated and poorly-differentiated tumors. It is described in detail in the WHO classification of tumors of female reproductive organs, and reported cases of testis are extremely rare (14). Sertoli cells form hollow or solid tubules and lack significant nuclear atypia or mitotic activity. There is a delicate fibrous stroma in which eosinophil-rich cytoplasmic Leydig cells are arranged in tubules, cords, and singly. Reinke crystals in the cytoplasm can be clearly confirmed. However, when Leydig cells are few or atypical, they are sometimes difficult to identify, making diagnosis difficult. Differences in immunophenotypes can help identify the individual components. Vimentin, CK, inhibin-α, and calretinin are positive, but the intensity of expression is different between Sertoli cell and Leydig cell areas. In addition, Sertoli cells are positive for CD56, steroidogenic factor-1 (SF-1), and WT-1, while Leydig cells tend to be negative, but express melan-A.

The MSCST (AGCT with Sertoli cell tumor) reported in this case is very rare. It is difficult to diagnose from the clinical and ultrasound features. Although there are certain morphological characteristics, the mixed components are not easy to identify. Therefore, immunohistochemistry is very important for diagnosis. However, it should be noted that the specificity and sensitivity of some tumor cells are not strong, which may bring some difficulties to diagnose. In addition, due to the relatively short follow-up time of this case and the rarity of such cases, it may not provide clinicians with sufficient information and experience.

Funding: This study was supported by Natural Science Foundation of Liaoning Province (Grant No. 201602859 to JW).

Reporting Checklist: The authors have completed the CARE reporting checklist. Available at http://dx.doi.org/10.21037/tau-20-795

Conflicts of Interest: All authors have completed the ICMJE uniform disclosure form (available at http://dx.doi.org/10.21037/tau-20-795). The authors have no conflicts of interest to declare.