Expression and clinical significance of interleukin-9 in renal tumors

Renal cell carcinoma (RCC) originates from the epithelial system of renal parenchyma and urinary tubules. Currently, the main treatment for localized RCC is surgical resection. For locally advanced RCC, targeted drug therapy is also necessary. The R.E.N.A.L. score was first proposed by Kutikov et al., to evaluate the difficulty of nephron-sparing surgery (1). It includes five aspects: radius: the diameter of the tumor; exophytic/endophytic rate of the tumor; nearness: the distance between the tumor and the collection system; anterior/posterior: tumor location on the ventral/visceral side of the kidney; and location: the location of the tumor along the longitudinal axis of the kidney. Higher scores correlate with more difficult nephron-sparing surgery. Nevertheless, there remains 30–40% of patients who experience metastasis or recurrence after treatment (2). Clear cell renal carcinoma (ccRCC) is the most common type of RCC, and some studies have found that destruction of the immune microenvironment is associated with ccRCC occurrence (3,4). For a long time in the past, IL-2 or IFN-α were the main treatments for advanced ccRCC (5-9). Large doses of HDIL-2 can produced toxic effects in some patients (10). This suggests that immunotherapy can be used as a treatment method for ccRCC.

Interleukin-9 (IL-9) is a cytokine secreted mainly by T cells; it has a directional regulatory effect on tumors (11). IL-9 significantly inhibited the growth of melanoma and squamous cell carcinoma in mice (12,13). IL-9 levels were low on pathological examination of colon cancer tissues; however, levels were high in adjacent normal tissues (14), suggesting that IL-9 had an anti-tumor effect. Nevertheless, high expression of IL-9 was measured in cells from liver cancer, pancreatic cancer and chronic lymphoblastic leukemia, suggesting that IL-9 may accelerate the pathogenesis of some tumors (11,15,16). The relationship between IL-9 and ccRCC has not yet been reported. Therefore, the purpose of this study was to measure expression levels of IL-9 in ccRCC and adjacent normal tissue, and to determine correlation between IL-9 expression and clinicopathological characteristics and progression-free survival (PFS). We present the following article/case in accordance with the REMARK reporting checklist (available at http://dx.doi.org/10.21037/tau-20-761).

Database data: the latest transcriptome data and clinical data of 33 kinds of tumors were obtained from the University of California Santa Cruz Xena (https://xena.ucsc.edu/) of The Cancer Genome Atlas database. The Ensembl ID was converted into gene ID, and the gene expression was extracted from the transcriptome data. The expression data were then combined with the survival data of patients with renal clear cell carcinoma. Perl (version 10.0.18362.836) and R software (version 3.6.2) were used for data processing. Because all data in this study were from TCGA database, patient consent was not required.

Raw data: patients who underwent surgical resection of renal tumors between January and December 2018 at the First Affiliated Hospital of Suzhou University with a pathological diagnosis of ccRCC were enrolled. Inclusion criteria for enrolled patients included complete case information and pathologically confirmed ccRCC after surgery. Exclusion criteria included a history of autoimmune disease or infectious disease. A total of 66 patients were enrolled, including 40 males and 26 females, age [35–82] years, with an average age of (61.62±10.87). There were 40 patients in which the tumor was less than 4 cm in diameter, 17 in which the diameters were 4 to 7 cm, and nine patients in which diameters were greater than 7 cm. There were 27 patients with R.E.N.A.L. scores of less than 6 and 37 patients with scores of more than 6. According to Fuhrman’s histological classification, 24, 28, 11, and 3 tumors were classified as grade I, II, III, and IV, respectively. According to TNM staging of American Cancer Federation in 2010, there were 46 tumors in stage I and 20 in stage II. The study was conducted in accordance with the Declaration of Helsinki (as revised in 2013). Our research was approved by the ethics committee of the First Affiliated Hospital of Soochow University (No. 209) and all the patients signed consent forms before the study.

We collected specimens from renal tumors and corresponding adjacent normal tissues (more than two centimeters away from the edge of the tumor and no invasion of tumor cells confirmed on post-surgical pathology). The specimens were fixed in formalin (10% formaldehyde solution) and then embedded in paraffin and sectioned for archiving.

Preserved paraffin slices were sequentially treated by dewaxing, hydration, phosphate buffer saline (PBS) washing and rinsing with citric acid buffer. To inactivate endogenous peroxidase, 3% hydrogen peroxide was dropped onto the slices, maintained at room temperature for 10 minutes and washed again in PBS. Subsequently, 5% bovine serum albumin 50 µL were added to the slides and incubated at room temperature for 10 minutes. After adding primary antibody against IL-9 (diluted at 1:200), the slices were incubated overnight at 4 °C, and washed with PBS thereafter. Next, second antibody was added, incubated at room temperature for 60 minutes and then washed with PBS again. Then sections were reacted with DAB color reagent for 5 minutes, re-stained with hematoxylin, dehydrated with a gradient concentration of ethanol, and finally sealed with neutral resin for microscopic observation.

Because IL-9 is mainly expressed in the cytoplasm, the appearance of pale yellow, brown yellow or brown granules in the cytoplasm at 200-fold magnification was considered positive. For a section to be judged positive, ten microscopic views with 400-fold magnification were randomly observed and scored according to the proportion of positive cells and staining intensity. Specifically, when the proportion of positive staining cells was less than 5%, 5–30%, 31–60%, and more than 60%, the scores were zero, one, two, and three, respectively. The scoring criteria for staining intensity were as follows: colorless scored zero, light yellow scored one, brown yellow scored two and brown scored three. Finally, the score of positively stained cell proportion was multiplied by the staining intensity score, and the product of less than two points were classified as negative (−); otherwise it was considered positive (+) (14).

Patients were followed up for six to seven months with the deadline of June 1, 2019. PFS was defined as the time from the day of surgery to the deadline or the time point when progression was observed. Patients with stage T1-T2 were followed up every six weeks after surgery, then every six months for up to three years, and annually thereafter. Patients with stage T3-T4 were followed up every six weeks after surgery, every three months up to two years, then every six months from the third year and annually thereafter. Follow-up was conducted by telephone and outpatient consultation.

Perl software and R software and related accessory packages. The quantitative data were expressed as mean ± standard deviation (SD). Qualitative data were expressed as ratios; comparisons between two groups were determined using the Mann-Whitney U test. The comparisons of cumulative data between two groups were examined by χ2 test. Statistical analyses were performed using SPSS 22.0. GraphPad Prism 8.0 was used to draw survival curves. Kaplan-Meier and Log-rank tests were used for survival analysis. All P values were considered statistically significant if P<0.05.

Figure 1 Expression of IL-9 in ccRCC. (A) There was a significant difference in the expression of IL-9 between tumor and adjacent tissues. (B) Effect of IL-9 expression on survival rate of patients. **, P<0.01. ccRCC, clear cell renal carcinoma; IL-9, interleukin-9.

Expression of IL-9 in ccRCC and adjacent tissues

Correlation between clinicopathological features and expression of IL-9 in ccRCC

Gender, body mass index (BMI), age, tumor diameter and TNM stage did not correlate with IL-9 expression in renal tumors (Table 2, P>0.05). Patients with R.E.N.A.L. scores ≤6 showed significantly higher IL-9 expression than did patients with R.E.N.A.L. score >6 (P=0.0277). The expression of IL-9 in tumor cells with medium-to-low differentiation was significantly lower than that of those with high differentiation (P=0.0041). 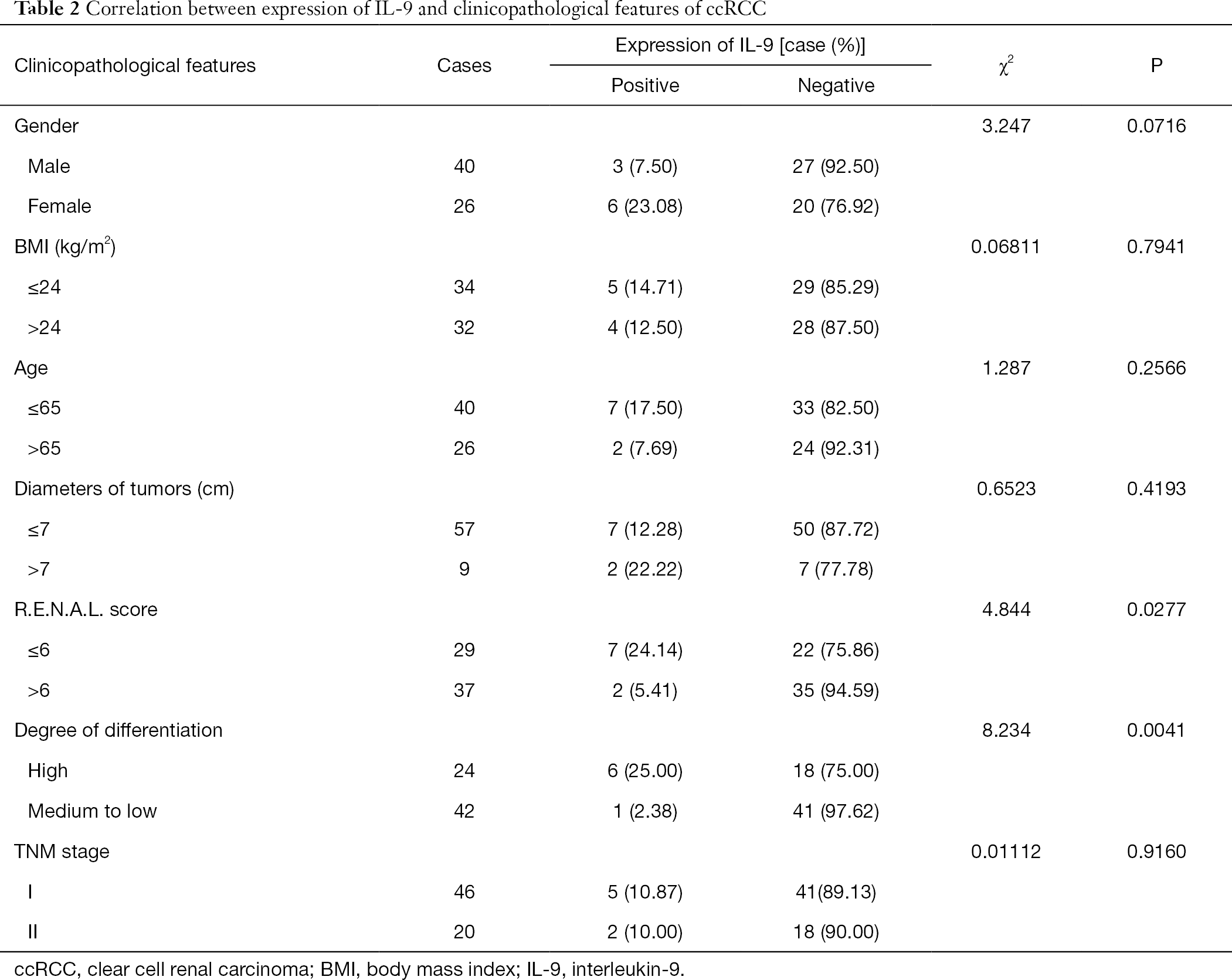 The correlation between expression of IL-9 and PFS in ccRCC 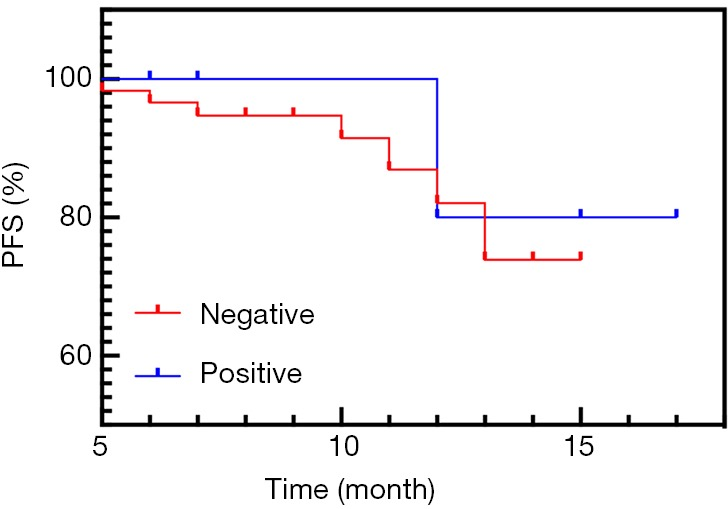 Ours is the first study of IL-9 in ccRCC. IL-9 is a cytokine with several biological effects, primarily synthesized by activated Th9 cells and secreted by neutrophils and mast cells in small amounts. IL-9 promotes the transcription and expression of relevant genes in the nucleus and plays a corresponding biological role by activating signal transducers and activator of transcription 1 (STAT1), START3, and STAT5 (17,18). Studies have found that the effector cells of IL-9, including cytotoxic T lymphocytes (CTL), dendritic cells (DC) and mast cells, play important roles in promoting cell inflammation, mediating immune diseases and tumor immunity (19,20).

In this study, we analyzed the data of 537 patients from a database using bioinformatics and found that there were differences in the expression of IL-9 in ccRCC. Furthermore, through survival analysis, we found that the patients with down-regulated expression of IL-9 and down-regulated IL-9 had lower survival rates and worse prognosis. In order to verify our inference, a small sample experiment was carried out. Through the experiment, we found that the expression of IL-9 in ccRCC was significantly lower than that in adjacent normal tissues. The relationship between IL-9 and tumors has not been fully clarified. On the one hand, IL-9 has been reported to inhibit the growth of melanoma and squamous cell carcinoma (12-14), possibly attributed to IL-9 in stimulating DC cells to enter sentinel lymph nodes, activating CTL cell antigens to initiate and intrude tumor tissues (21). On the other hand, high expression of IL-9 has been measured in the blood of patients with hematological malignancies such as lymphoma (22), and the use of antibodies to block IL-9 with antibodies slowed the progress of tumors (23). These data suggest that IL-9 also promoted tumor progression (15,16). In the present study, IL-9 was expressed at low levels in ccRCC but was highly-expressed in adjacent normal tissues, suggesting that IL-9 may inhibit the growth of ccRCC. This could be explained by the fact that the kidney, an important excretory organ with abundant perfusion, is more conducive to infiltration and aggregation of immune cells, and it secretes a variety of cytokines including IL-9. Nevertheless, ccRCC is mainly composed of renal parenchymal cells, and the immune effector cells in them are in a state of inhibition, resulting in less secretion of IL-9.

In summary, IL-9 may have anti-tumor effects on ccRCC; IL-9 levels correlated with R.E.N.A.L. scores and tumor differentiation. The immune mechanism of IL-9 against ccRCC still needs to be investigated. There were some limitations in our study, including the small size and short follow-up period, both of which need to be remedied in the future.

Funding: This work was supported by the Suzhou Science and Technology Project (SLC201906 and SYS2019053).

Reporting Checklist: The authors have completed the REMARK reporting checklist. Available at http://dx.doi.org/10.21037/tau-20-761

Conflicts of Interest: All authors have completed the ICMJE uniform disclosure form (available at http://dx.doi.org/10.21037/tau-20-761). The authors have no conflicts of interest to declare.

Ethical Statement: The authors are accountable for all aspects of the work in ensuring that questions related to the accuracy or integrity of any part of the work are appropriately investigated and resolved. The study was conducted in accordance with the Declaration of Helsinki (as revised in 2013). The study was approved by the ethics committee of the First Affiliated Hospital of Soochow University (No. 209) and informed consent was taken from all individual participants.