Renal cell carcinoma (RCC) is the most common solid lesion within the kidney and accounts for approximately 3% of all malignancies in humans. During the last 2 decades, the incidence of RCC has increased annually by 2% both worldwide and in Europe, leading to approximately 19.45/100,000 new RCC cases and 7.67/100,100 kidney cancer-related deaths within the European Union in 2018 (1,2). In China, according to the China Cancer Registration Annual Report, the incidence of RCC was 3.96/100,000 and 4.99/100,000 in 2005 and 2014, respectively (3). The most predominant pathological type is clear cell renal cell carcinoma (ccRCC), which accounts for 70–80% of all RCCs (3,4). Compared with other subtypes of RCC, such as papillary RCC (pRCC) and chromophobe RCC (cRCC), ccRCC is thought to be associated with a more aggressive clinical course and a significantly poorer prognosis, and patients are reported to have a 5-year disease-free survival (DFS) rate of 70% and a cancer-specific survival (CSS) rate of 24% (4-6). Tumour grade has been considered an independent prognostic factor for RCC (7,8). While numerous grading systems have been proposed for RCC, the Fuhrman grading system has been the most widely accepted and endorsed for routine clinical use (9,10). Despite its widespread use, it has become increasingly obvious that the system has a number of inherent problems, in particular those relating to poor interpretability and consequently poor inter-observer reproducibility, which resulted from the Fuhrman grading system requiring the simultaneous assessment of 3 nuclear parameters (i.e., nuclear size, nuclear irregularity, and nucleolar prominence); however, there are no guidelines that can be used to assign a weight to achieve a final grade when the features of any of the parameters appear to be discordant (11,12). To address these inherent difficulties, the International Society of Urological Pathology (ISUP) 2012 Consensus Conference recommended the use of the ISUP grading system, which proposed that for ccRCC, nucleolar prominence alone should be used to identify grade 1 to 3 tumours and extreme nuclear pleomorphism and/or sarcomatoid and/or rhabdoid morphology and/or giant size be used to identify grade 4 tumours (13) (Tables 1,2).

In this study, we assessed the value of the WHO/ISUP grade and the Fuhrman grade in predicting the prognosis of ccRCC in a Chinese population and compared the excellent predictive accuracy of these two systems. To the best of our knowledge, our study is the first to verify the predictive value of the WHO/ISUP grading system in a Chinese population. We present the following article in accordance with the STROBE reporting checklist (available at http://dx.doi.org/10.21037/tau-20-799).

The Clinical Research Ethics Committee of Xiangya Hospital, Central South University approved the study (No. 2017121011), and informed consent was waived due to the retrospective nature of the research. The authors confirm the study conformed to the provisions of the Declaration of Helsinki (as revised in 2013). A computerized search of the pathology database at our institution revealed 1,333 patients with ccRCC that had undergone radical nephrectomy or nephron-sparing surgery between July 2010 and May 2018. One hundred and twelve patients which identified as other subtypes of RCC or mixed with other subtypes of RCC were excluded because the biological aggressiveness is different. Patients who lacked prognosis information (N=143) and who followed-up less than 2 years (N=293) were excluded from our study. Furthermore, 15 patients treated by neoadjuvant therapy and 17 patients died for other reasons were also excluded. Therefore, 753 patients were eventually included in our study.

All pathologic data of the 1,333 patients were retrospectively reviewed by two pathologists (H Yin and G Gong, with 25 years and 6 years of experience, respectively, in uropathology). Evaluation of the histological subtype and pathological T stage of all patients was based on the 2016 WHO classification. All lesions were regraded using the criteria of Fuhrman et al., and those regraded using the WHO/ISUP grading system were assessed in line with the 2012 ISUP Consensus Conference recommendations (10,13) (Tables 1,2). Tumour grade was based on the highest grade present on any slide, even if focal. When there was a different opinion on a pathological slice, two pathologists re-evaluated the slices together and finally reached a consensus. The reviewers were blinded to the prognostic information.

The data were descriptively summarized using frequency counts and percentages for categorical variables and medians and ranges for measured variables. Survival curves were estimated using the Kaplan-Meier method and compared between groups using log-rank tests. The CSS interval was measured from the date of surgery to the date of death from RCC. The RFS interval was measured from the date of surgery until the detection of recurrence or metastasis. Multivariate analyses were undertaken utilising multivariate Cox proportional hazards models. We separately assessed the clinical outcomes in the Fuhrman group and the ISUP group and evaluated the predictive accuracy for clinical outcomes between the Fuhrman and ISUP groups with the concordance index (C-index), and evaluated the difference in C-index between the two grading systems with Z-test. The C-index refers to the area under the receiver operating characteristic curve. A C-index of 1.0 indicates a perfect predictive model, whereas a value of 0.5 indicates that the feature contains prognostic information equal to that obtained by chance alone. All tests were two-sided, and P values <0.05 were considered statistically significant.

Of the 753 patients that provided adequate pathology information and follow-up data, there were 511 (67.86%) males and 242 (32.14%) females, with a median age of 55 years (range, 5–87 years). A total of 533 patients underwent radical nephrectomy, and 220 underwent partial nephrectomy. The median postoperative follow-up period was 62 months (range, 27–114 months). The clinical characteristics of the patients are summarized in Table 3. 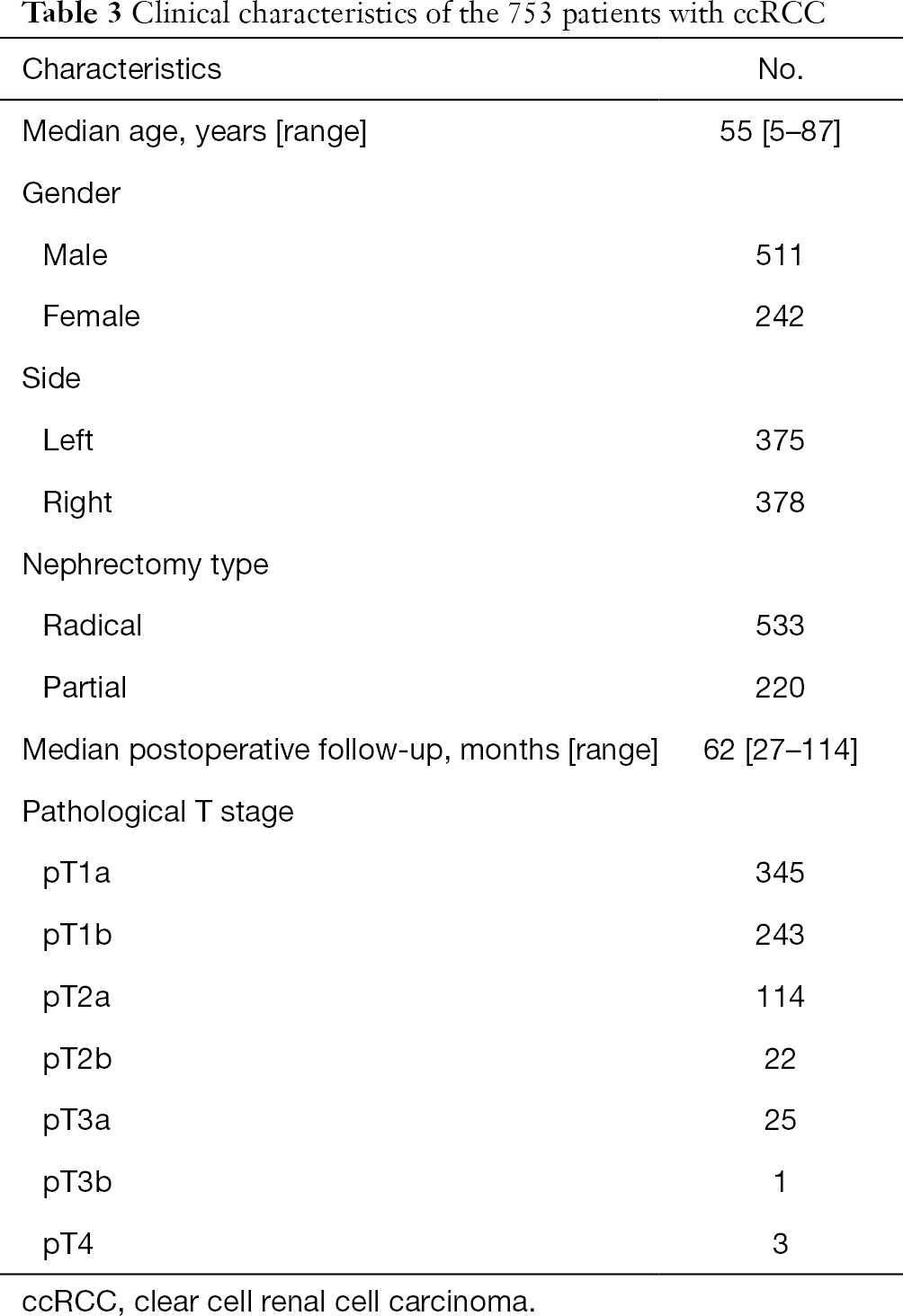 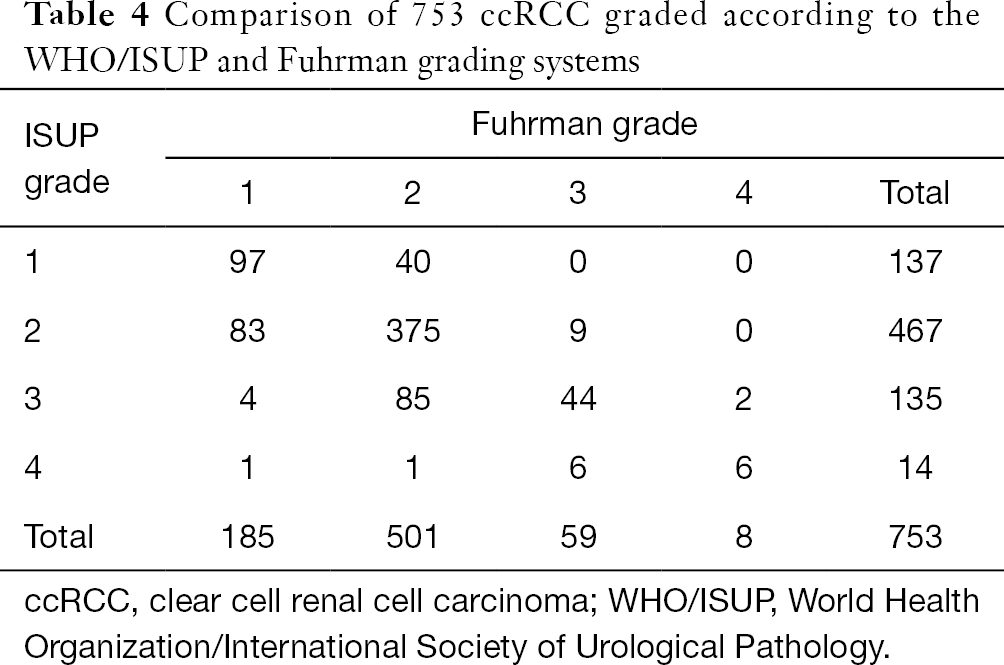 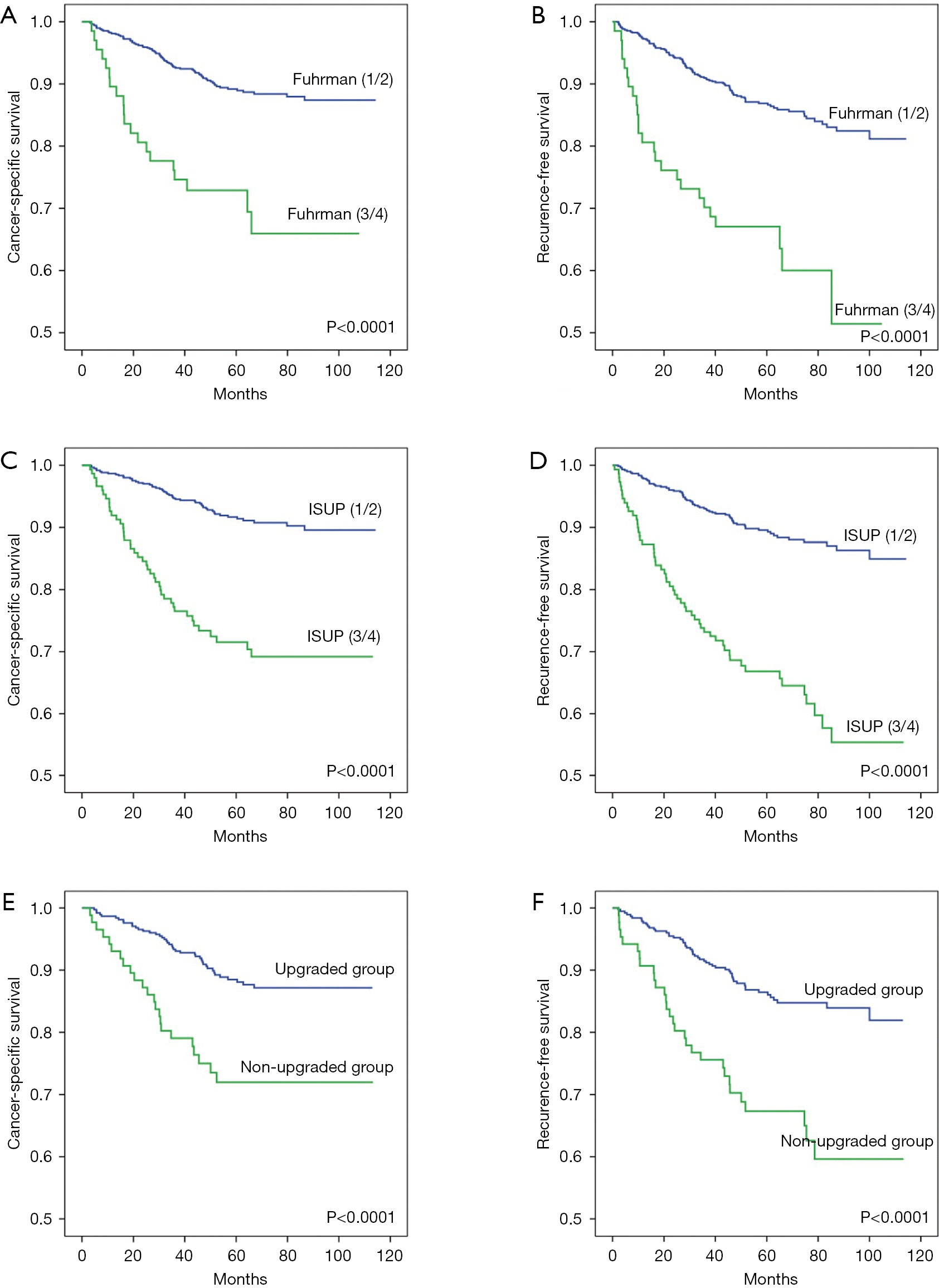 ccRCC is the most common subtype of RCC, accounting for 70–80% of all RCCs, followed by pRCC and cRCC, and its prognosis is significantly poorer than that of the other subtypes (4-6,22). Cheville et al. reported that Fuhrman grade lacked prognostic significance for cRCC (23,24). In addition, the WHO/ISUP grading system has replaced the Fuhrman grading system, and it can provide better grade separation, especially in grade 2 and 3 tumours (a drawback to the Fuhrman system), and this new system has exhibited a stronger association with patient outcomes. However, only a few studies have reported that the grading system relying solely on WHO/ISUP grade has shown a stronger association with patient outcomes compared with those relying on Fuhrman grade for ccRCC, and there is no similar study in the Chinese population (19). However, the Chinese are a heterogeneous population, with different obesity rates and smoking rates than others, which are precisely the pathogenic factors of RCC (25,26). For these reasons, our study focused on whether the WHO/ISUP grading system is superior to the Fuhrman grading system and more likely to indicate the prognosis of patients with ccRCC in the Chinese population. Therefore, we reviewed all pathological slides and reassigned pT stage and nuclear grade on the basis of the 2016 WHO/ISUP classification and the Fuhrman grading system. All potential clinicopathological factors for CSS and RFS were estimated by the Kaplan-Meier method; independent associations with CSS and RFS were calculated with Cox proportional hazards regression models.

The Fuhrman grading system has been widely adopted worldwide since 1982 (10). However, with its widespread use in contemporary pathology practice, there are many internal problems that are constantly emerging, especially those related to reproducibility (19,30-33). The final determination of Fuhrman classification requires the simultaneous assessment of nuclear size, nuclear shape, and nucleolar prominence, but the Fuhrman grading system does not specify the weight of each parameter, particularly when there is an inconsistency between any of the parameters; no standard exists to allocate a weight to arrive at a final grade. Moreover, there is obvious pathomorphological heterogeneity in RCC and scant defining details relating to some of the grading criteria, which results in the subjectivity of pathologists. Therefore, the Fuhrman grading system shows poor reproducibility (30,33). Furthermore, a previous study reported that of the three defined parameters of the Fuhrman grading system, only nuclear size and nucleolar prominence were associated with the clinical outcome of ccRCC (28). Delahunt et al. also noted that although the nuclear long axis was significantly associated with prognosis, the Fuhrman criteria overestimated nuclear size, and nucleolar prominence evaluated individually showed utility for grading purposes (28). Kim et al. reported that a high WHO/ISUP grade and a high Fuhrman grade were independent risk factors for CSS but not RFS in ccRCC patients. In addition, both grading systems were significantly associated with the CSS of ccRCC patients, but there was no significant difference in the C-index between the two grading systems (34). However, our study clarified that the two grades were independent prognostic factors for both the CSS and RFS of ccRCC patients and that the predictive ability of the WHO/ISUP grading system was superior to that of the Fuhrman grading system.

There were several limitations to this study. First, because this was a single-institution retrospective study, our results must be verified in larger, prospective multicentre studies. Second, some patients were lost to follow-up or lacked prognostic data. Third, we included only cases pathologically proven to be ccRCC and excluded other primary renal neoplasms. Finally, our study focused only on pathological grades and did not focus on tumour necrosis or vascular invasion.

In summary, to the best of our knowledge, the current study is the first to verify the correlations between postoperative prognosis and the WHO/ISUP grade of ccRCC in a Chinese population. Furthermore, our study confirmed that the WHO/ISUP grading system was superior to the Fuhrman grading system in predicting the clinical outcomes of ccRCC patients. Our study provides a certain clinical value for adopting the WHO/ISUP classification in the Chinese population.

Funding: This work was supported by the Shenghua Yuying talents program of Central South University.

Reporting Checklist: The authors have completed the STROBE reporting checklist. Available at http://dx.doi.org/10.21037/tau-20-799

Conflicts of Interest: All authors have completed the ICMJE uniform disclosure form (available at http://dx.doi.org/10.21037/tau-20-799). The authors have no conflicts of interest to declare.

Ethical Statement: The authors are accountable for all aspects of the work in ensuring that questions related to the accuracy or integrity of any part of the work are appropriately investigated and resolved. The Clinical Research Ethics Committee of Xiangya Hospital, Central South University approved the study (No. 2017121011), and informed consent was waived due to the retrospective nature of the research. The authors confirm the study conformed to the provisions of the Declaration of Helsinki (as revised in 2013).