Low intensity shockwave therapy (SWT) is an emerging treatment option for men with vasculogenic erectile dysfunction (ED). The efficacy of SWT in this setting has been evaluated in several randomized trials with varying benefit (1-7). While there is substantial heterogeneity in treatment regimens employed and the devices used, meta-analyses of these trials suggest men with vasculogenic ED experience a significant improvement in erectile function after SWT (8-11). To date, all pre-clinical and clinical trials thus far have utilized focused shockwave therapy (fSWT) (12). Radial wave therapy (rWT) is an alternative method of creating acoustic waves that is commonly utilized in orthopedics, physical therapy, and dermatology, but has not been evaluated for use in men with ED (13-16). The effect of rWT on men with vasculogenic ED, while often marketed as evidence-based ED treatment modality, is unknown.

Extracorporeal shockwaves used in medicine entail an acoustic wave of energy that travels through tissues and releases a rapid rise and fall of pressure at tissue interfaces, known as a shockwave. Acoustic waves can be delivered to tissues by two distinct mechanisms: focused shockwaves and non-focused radial waves. The two types of shockwaves differ substantially in their depth of tissue penetration, ability to focus the shockwave, and the rapidity of the rise and fall of pressure (shape of the shockwave). The different waveforms may produce varying biological effects, but these differences for specific indications remain largely unknown.

Focused shockwaves, which are the shockwaves used for extracorporeal shockwave lithotripsy treatment of urolithiasis, can be targeted to focal points at various tissue depths (up to 10–12 cm) by utilizing reflection of energy created by an acoustic wave source such that the waves convene at a focus point for maximal energy, limiting energy dispersion and collateral damage to adjacent tissues (17). The energy profile of a focused shockwave entails a rapid (10 nanoseconds) rise and fall of the pressure wave. Focused shockwaves are generated by initiating a pressure wave via three distinct mechanisms: piezoelectric, electromagnetic, and electrohydraulic. These create a unique pressure wave that can be directed at a focal point (18). fSWT devices are currently FDA class II devices, which limits use to physicians typically in IRB-approved research protocols.

In contrast, the maximal point of energy of a radial wave, sometimes referred to as a dispersive shockwave, is at the tip of the device (19). These acoustic waves then disperse radially away from the tip of the device with rapid energy attenuation. The depth of penetration of radial waves varies based on energy input, but can reach up to 3.5 cm in human tissues. The energy profile entails a slower (5–10 microseconds) rise and fall of pressure than a focused shockwave. Radial waves are generated by a mechanical concussion in which a ballistic projectile repeatedly strikes an endplate and generates the dispersive acoustic wave. There are two mechanisms used to force the bullet against the endplate: pneumatic air compression and an electromagnetic system. rWT devices are currently FDA class I devices that do not require regulatory approval and may be used by anyone, with or without medical training.

At our clinic we have used both types of machines for clinical trials and also offer therapy outside of these trials based on a clinical diagnosis of vasculogenic ED. The objective of this study is to compare the effectiveness of rWT and fSWT on ED. We hypothesize that rWT is non-inferior to fSWT for treatment of ED. We present the following article in accordance with the STROBE reporting checklist (available at http://dx.doi.org/10.21037/tau-20-911).

We performed an IRB approved retrospective review of all men with ED that were treated with either fSWT or rWT outside of other existing SWT research protocols between 2017 and 2019 at our institution in two clinical locations. 48 patients included in the study were evaluated by a single urologist (DS). The use fSWT or rWT was dictated by clinic location where the treatment was administered; the fSWT machine was located at one outpatient clinic location and the rWT machine at another, neither the patients nor the urologist chose the SWT modality. Patients were excluded from analysis if they had ED of known neurologic cause (e.g., post radical prostatectomy), untreated hypogonadism, or a clinical diagnosis of psychogenic ED. rWT was performed using the Zimmer enPuls Pro (Zimmer MedizinSysteme GmbH, Neu-Ulm, Germany), which utilizes an electromagnetically produced radial pulse. fSWT was performed using the UroGold 100TM (Tissue Regeneration Technologies LLC, Woodstock, Georgia), which utilizes an electrohydraulic pulse generator. In both groups, patients underwent six consecutive weekly treatments using the settings recommended by the manufacturer. The fSWT regimen entailed 3,000 shocks per session at 0.09 mJ/mm2. The rWT regimen entailed 10,000 shocks per session at 15 Hz and 90 mJ. The penis was manually, gently stretched for delivery of shockwaves to six treatment sites: one at each crus of the penis on the perineum and two locations on the shaft bilaterally. The study was conformed to the provisions of the Declaration of Helsinki (as revised in 2013). This study was reviewed and approved by the Cleveland Clinic Institutional Review Board (IRB No. 12-118). Informed consent was waived for this retrospective study as no direct interventions to the patient were present.

To assess the efficacy of rWT and fSWT we compared the pre- and post-treatment SHIM scores. The mean change in SHIM scores (delta SHIM) and the proportion of men achieving a grade 2 or better response between the two treatment groups (i.e., erections sufficient for penetration with or without PDE5i) were compared. Potential confounders include placebo effect due to nature of the intervention requiring a generator.

Intra-group comparisons of continuous data were made with a paired t-test, while an unpaired t-test was used for inter-group comparisons. Categorical data was compared with a chi-squared test. P values <0.05 were considered statistically significant. Statistical analyses were performed using SPSS version 23.0 (IBM, Armonk, New York, USA). 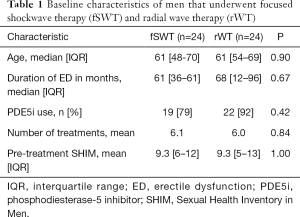 Figure 1 Box and whisker plots of pre- and post-treatment Sexual Health Inventory in Men (SHIM) scores for men treated by (A) focused shockwave therapy and (B) radial wave therapy (rWT). X-marks within the box plot denote the mean SHIM score.

None of the patients included in this study experienced an adverse event.

Low-intensity SWT is emerging as a non-invasive alternative or supplemental option to PDE5 inhibitors for men with vasculogenic ED. To date, preclinical and clinical studies have utilized fSWT to deliver shockwaves. Despite the absence of clinical studies, rWT use is becoming widespread, which may be due to the ease of use of these devices and minimal FDA restrictions. rWT is widely used in other fields for indications such as venous ulcers and plantar fasciitis with high-quality evidence to support its use (21,22). In this retrospective study, we demonstrated that rWT was clinically efficacious in treating men with a history suggestive of vasculogenic ED (mean SHIM improvement of 6.8), and clinical outcomes were not appreciably different between men treated by rWT and fSWT.

The proposed mechanism of action of SWT includes microtrauma that stimulates angiogenesis, stem cell proliferation, and nerve regeneration (23,24). In rat models of ED, SWT lead to increased vascular endothelial growth factor (VEGF) and endothelial nitric oxide synthase (eNOS) release within the corpus cavernosum (25). Because these studies were performed using focused shockwaves, the biological effects of rWT are less well-understood. Nevertheless, if the radial wave penetrates the tissue of interest and causes non-lethal trauma to the target cells, it is reasonable to assume that the injury response would be agnostic to the energy source of the wave, especially if an equivalent clinical response is seen. Side effects of both fSWT and rWT are minimal and short-term, including bruising, swelling, paresthesia, or pain in the treatment area (26).

Prior SWT trials have shown efficacy with fSWT generators such as Direx MoreNova (27), Stortz Duolith SD1 (28,29), and Omnispec ED1000 (1,2,27-29). Several meta-analyses have shown focused shockwave therapies to be clinically favorable in ED (8-11). In a meta-analysis of seven randomized sham-controlled trials, Clavijo et al. reported a SHIM improvement of 6.4 points after fSWT compared to 1.65 in those treated with sham therapy (8). Several subsequent meta-analyses demonstrated that men treated with fSWT experienced SHIM improvements of 2.0–4.23 (9-11,26,30). Most studies included in these meta-analyses prohibited PDE5i use during fSWT treatment, highlighting the independent efficacy of fSWT therapy in patients who likely did not respond to first-line PDE5i treatment. This data suggests utility of fSWT for ED in PDE5i non-responders or for its dual use with PDE5i.

rWT has garnered increasing use and attention in non-urological fields. The orthopedic field has extensively used rWT for treatment of conditions such as biceps tendinopathy (31), knee tendinopathy (15), and plantar fasciitis (15,31,32). A meta-analysis of fSWT and rWT in soft-tissue musculoskeletal injuries showed that the treatment modalities are equally safe, with varying efficacy for different injuries, although no direct head-to-head comparisons have been done (13).

This study has several limitations. The retrospective design, relatively small sample size, and unblinded nature of treatment preclude the ability to make definitive conclusions of efficacy of either modality against sham. Although 24% (6/24) and 46% (11/24) of patients reported no improvement in the rWT and fSWT groups, respectively, the small number of patients in each arm may have precluded the detection of a statistically significant difference. The findings from this pilot study are unable to provide definitive guidelines of superiority of one technique over another. However, larger studies powered for a superiority analysis may corroborate our findings more definitively. In keeping with most ED trials, a placebo effect likely accounts for a portion of the clinical benefit observed in both study arms. However, our data align with the clinical benefit observed in sham-controlled fSWT trials, suggesting the benefit is not due to placebo alone. The benefit seen in both the fSWT and rWT group in our study is strikingly similar. Long-term efficacy was not assessed as most patients were an out-of-town referral population. The usage of PDE5i is a potential confounding factor that limits the ability to draw conclusions about efficacy of SWT as a stand-alone treatment. However, 8/24 (33%) and 9/24 (37.5%) of men treated with rWT and fSWT, respectively, reported grade 3 improvement not requiring use of PDE5i after SWT, suggesting the independent efficacy of both SWT modalities in a sizable minority of men. Additionally, PDE5i use after SWT is commonly performed in clinical practice, and SWT may enhance the therapeutic effects of PDE5i in a synergistic manner (9).

In our patient population, low intensity SWT with either radial waves or focused shockwaves were clinically beneficial for men with a history suggestive of vasculogenic ED. Similar results were found between the two treatment modalities in our study; however, further studies with larger samples are needed to confirm our results before any recommendations on this topic are made. While limited by its retrospective nature, lack of randomization (although neither patient nor doctor had a choice of therapy) and lack of sham control, this suggests rWT is equally efficacious to fSWT in the treatment of vasculogenic ED and warrants further investigation in clinical trials.

Reporting Checklist: The authors have completed the STROBE reporting checklist. Available at http://dx.doi.org/10.21037/tau-20-911

Conflicts of Interest: All authors have completed the ICMJE uniform disclosure form (available at http://dx.doi.org/10.21037/tau-20-911). DAS serves as an unpaid editorial board member of Translational Andrology and Urology from Dec 2017 to Jul 2022. DAS reports investment from Triurol, paid consultant from UroGen, outside the submitted work. The other authors have no conflicts of interest to declare.

Ethical Statement: The authors are accountable for all aspects of the work in ensuring that questions related to the accuracy or integrity of any part of the work are appropriately investigated and resolved. The study was conformed to the provisions of the Declaration of Helsinki (as revised in 2013). This study was reviewed and approved by the Cleveland Clinic Institutional Review Board (IRB No. 12-118). Informed consent was waived for this retrospective study as no direct interventions to the patient were present.