Adequate antibiotic therapy is of pivotal importance in the treatment of infections in critically ill patients. However, the pharmacokinetics of those ill patients can be significantly altered due to augmented renal clearance (ARC) of drugs eliminated via kidneys (1). ARC has been reported in 30–65% of patients in the intensive care unit (ICU) (2). There is a clear association between ARC and subtherapeutic antibiotic concentrations, as well as literature suggesting worse clinical outcomes (3,4).

Currently, vancomycin is still suggested as the first-line treatment against infections with Gram-positive bacteria, especially for the treatment of methicillin-resistant Staphylococcus aureus (MRSA) infections. To achieve therapeutic concentrations and avoid nephrotoxicity, the Chinese guidelines recommend that target trough serum concentrations of 10–20 mg/L are required to achieve an area-under-concentration-time-curve (AUC) to minimum-inhibitory-concentration (MIC) ratio (AUC/MIC) of >400. As a result, optimizing of vancomycin therapy by therapeutic drug monitoring (TDM) is widely recommended (5). However, in the clinical practice, our previous study revealed that the serum trough concentration of vancomycin was even much lower than 10–20 mg/L when infused with the suggested dose from drug instructions or guidelines in patients with severe acute pancreatitis, and ARC may be the main risk factor (6). Since vancomycin is water soluble and can be cleared predominantly by kidney, infusion with an empirical dosage in patients with ARC would potentially result in failed treatment with low drug exposure or bacterial resistance (7). The present study was to provide pharmacokinetics-pharmacodynamics (PK-PD) parameters of serum vancomycin and to analyze the optimal dosage regimen in critically ill patients with ARC, hoping to explore precise and accurate dose adjustment methods for vancomycin. To our best knowledge, this is the first study suggesting the optimal dosage regimen of vancomycin in critically ill patients with ARC in the Chinese population.

We present the following article in accordance with the STROBE reporting checklist (available at http://dx.doi.org/10.21037/tau-20-1048).

All critically ill patients tested for steady-state trough vancomycin serum concentrations during the last 6 years (January 2013–November 2018) in which a tertiary level hospital was analyzed. The study was approved by the local Ethics Committee of Ruijin Hospital, who waived the need for informed consent in consideration of the retrospective and observational nature of the study, and the study was performed following the ethical standards laid down in the Declaration of Helsinki (as revised in 2013). Patients with poor renal function (eCLcr <80 mL/min), pregnant or lactating are excluded. Two hundred eighty vancomycin concentrations were eligible for analysis: 139 (50%) and 141 cases were assigned to the ARC (eCLcr, creatinine clearance, estimated by Cockcroft-Gault, >130 mL/min) and the non-ARC groups (eCLcr in the range, 80–130 mL/min), respectively.

Fifteen mg/kg initial dosage of vancomycin was administered intravenously every 12 h lasted for 2 hrs in the critically ill patients. Serum vancomycin concentrations were measured by the fluorescence polarization immunoassay method using an Integra700 or a Cobas6000 c501 analyzer (Roche Diagnostics, Shanghai, China). The lower and upper limits of quantification of the vancomycin assay were 0 and 100.0 mg/L, respectively. Pharmacokinetic parameters of vancomycin are estimated using the Bayesian estimator JPKD Ver. 3.1, which was developed with the population pharmacokinetic analysis with a two-compartment model in a Spanish population (8). AUC24h was calculated using the trapezoidal area method through the steady-state serial concentrations of 0, 1, 2, 4, 6, 8, 12, and 24 h before and after vancomycin administration, which was estimated via the above mentioned Bayesian estimator. The MIC of the Gram-positive bacteria (including Staph Aureus, Enterococcus faecalis, and Enterococcus faecium) were recorded, the AUC24h/MIC was calculated using the average MIC for each group, respectively. Vancomycin TDM has been implemented, and dose adjustment was with the trough level 5 days post vancomycin initiation. The desired daily dose successful in achieving the target trough levels (10 mg/L) of vancomycin was recorded using the Bayesian estimator JPKD Ver. 3.1.

Numerical variables are summarized as the mean ± standard deviation (SD). Parametric and nonparametric analyses were performed using SPSS statistical software (version 21.0, SPSS Inc., Chicago). Determination of the significant differences in parameters between both groups was performed by either the Student’s t-test or the Mann-Whitney U test. A P value of <0.05 was statistically significant.

The characteristics and the main pathogenies of the patients

The characteristics and the main pathogenies are summarized in Table 1. The ARC group contains more male patients (64.7%) with average age and CLcr of 40 years old (P<0.05) and 180.8 mL/min (P<0.001), respectively. The average daily dose of vancomycin was 15.0 mg/kg (q12h) and comparable among the groups. The patients with ARC exhibited higher vancomycin clearance (CL) and lower trough serum vancomycin concentration values than non-ARC patients. 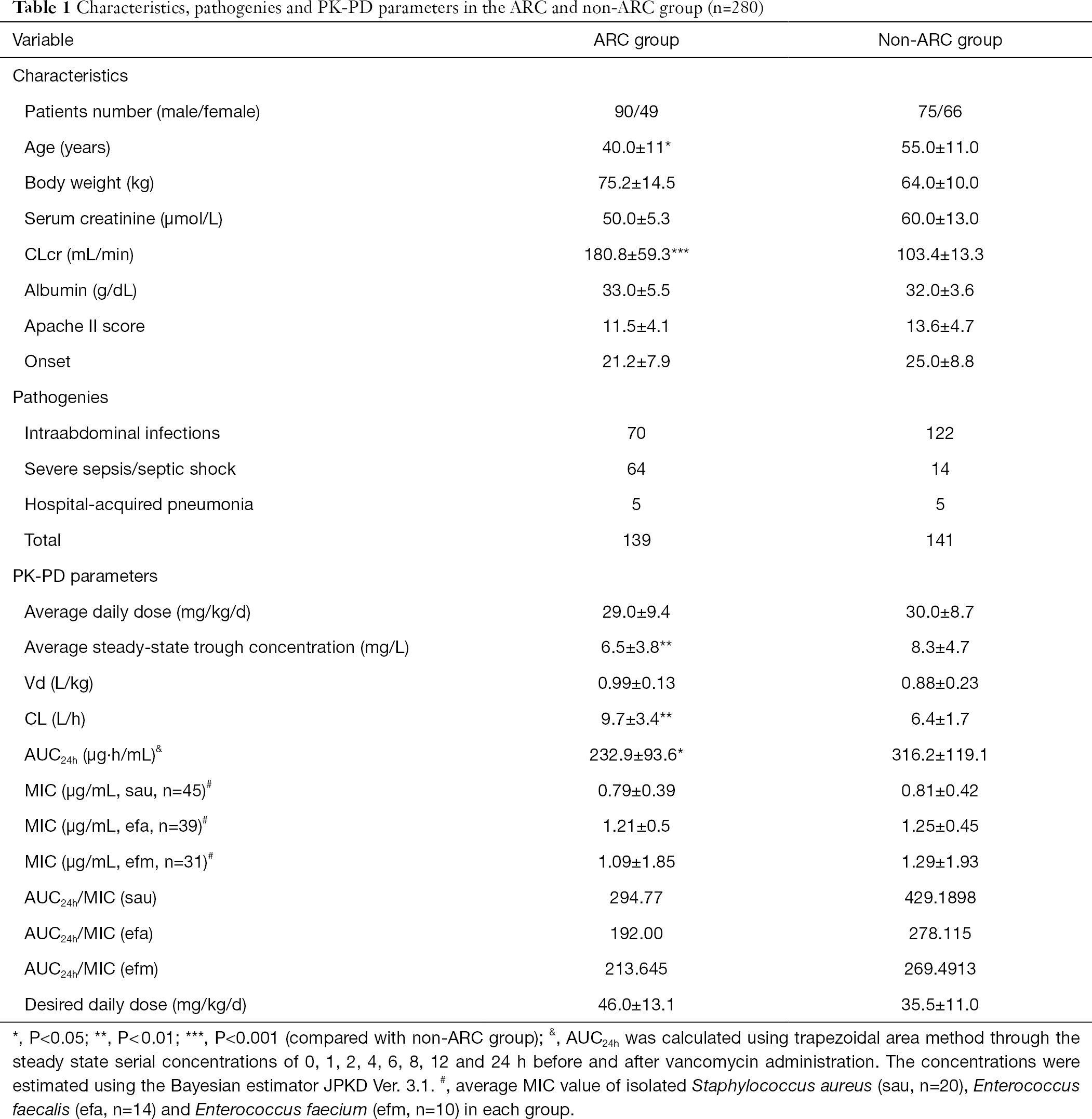 The PK-PD parameters of the patients

All the ICU patients demonstrated lower AUC24h values than the target level of 400 µg·h/mL recommended for S. aureus, and this value showed a lower trend in the ARC group than the non-ARC group (232.9 vs. 316 µg·h/mL). There was no significant difference in the apparent volume of distribution (Vd) for vancomycin between the patients with or without ARC (Table 1). The MIC values of the Gram-positive bacteria (Staph Aureus, Enterococcus faecalis, and Enterococcus faecium) were recorded, and the AUC24h/MIC was calculated using average MIC for each group, respectively (Table 1). Subtherapeutic trough concentrations of vancomycin (<10.0 mg/L) were observed in 77.7% of the ARC patients and 68.8% of the non-ARC patients (P<0.05). The proportion of patients with a trough concentration of 10–15 and 15–20 mg/L was 17.9% and 4.3%, respectively, in the ARC group and 24.8% and 2.8%, respectively, in the non-ARC group. A daily dose of 46.0 and 35.5 mg/kg of vancomycin is needed, respectively, in the ARC and non-ARC group to achieve a target trough concentration of 10 mg/L.

ARC is a commonly occurring clinical phenomenon with worse clinical outcomes in critically ill patients receiving antimicrobial therapy (9). Those patients are often exposed to factors that may increase the likelihood of ARC occurrences, including infection, trauma, pancreatitis, burns, major surgery, and using intravenous fluids, vasopressors, and inotropes. Minkutė et al. revealed new significant conditions to predict ARC: mechanical ventilation and hemodynamically unstable status, which are common in ICU (7). Udy et al. have reported that 65% of ICU patients with ARC, had at least 1 occasion of measuring ARC during the first 7 days of ICU admission (10). The present study focused on ICU patients with ‘normal’ renal function, and the results showed that ARC could be found in up to half of the patients with an average CLcr of 180.8 mL/min in this cohort of investigative patients. As vancomycin is suggested as the first-line treatment against infections with Gram-positive bacteria in these critically ill cases and subtherapeutic serum concentrations of vancomycin dominated in ICU patients, especially those with ARC in our study, this finding should be considered while prescribing vancomycin.

ARC was more relevant in younger male patients (7), and results of our study confirmed this statement: most patients with ARC are males (64.7%) with an average age of 40 years old while there were 53.2% males with an average age of 55 years old (P<0.05) in the non-ARC group in our study. Results in body weight and Apache II score were comparable without significant difference in both groups. However, higher CLcr and lower serum concentrations of vancomycin were more often detected in the ARC group (P<0.001 and P<0.01, respectively) under a comparable daily dose of 30 mg/kg/d. The usual dosage of the drug showed lower than 30% of therapeutic trough concentrations of vancomycin in both ARC (77.8% subtherapeutic and 22.2% therapeutic) and the control groups (68.8% subtherapeutic and 27.7% therapeutic). Comparable results were revealed by studies of Ocampos-Martinez et al., who reported higher proportions of insufficient vancomycin concentrations in patients with similar CLcr (11). Enhanced vancomycin clearance will lead to shorter drug half-life (t1/2) and lower AUC, which could have a direct implication on drugs’ pharmacodynamic effects. These PK-PD changes to drug therapy in ARC may have drastic implications on patient outcomes. Previous studies have established that steady-state vancomycin trough concentration is an adequate surrogate of AUC/MIC, which is, in turn, correlated with treatment success (12). An AUC24h/MIC >350 was associated with clinical success, and an AUC24h/MIC >400 indicated faster bacterial eradication in patients receiving vancomycin for Staphylococcus aureus pneumonia (13). In our present study, we revealed that all the ARC patients did not have AUC24h/MIC, levels above the target 350 µg·h/mL, and even lower than 300 µg·h/mL under a conventional dosage regimen, the values were much lower in those who were infected with Enterococcus faecalis and Enterococcus faecium, due to higher MIC values of these pathogens. Similar results were demonstrated by Carlier et al. who showed the target PK-PD was significantly lower in patients with ARC than those without ARC (50% fT>MIC and 100% fT>MIC, respectively) within 61 patients who received meropenem (1 g q8h) or piperacillin/tazobactam (4.5 g q6h) as an extended infusion for 3 h (14). In patients who did not reach the target 15–25 mg/L 48 h post-treatment initiation, in-hospital mortality was significantly higher than those who have attained a therapeutic target trough (OR =2.1, P=0.003) (14). These facts emphasize a general warning about the risk for underexposure in the case of critically ill should be warranted. They also highlight the need for dosing guidance, especially in those with ARC. In our present study, vancomycin TDM has been implemented, and dose adjustment was with the trough level 5 days post vancomycin initiation. A desired dose of 46.0 and 35.5 mg/kg/day were needed in patients with or without ARC, respectively, to reach the target trough levels of 10 mg/L. In severe cases, to achieve the target of 15 mg/L, our study suggested a loading dose of 25 mg/kg followed by a daily dose of 69 and 53 mg/kg for those with and without ARC, respectively. A vancomycin dosing algorithm could also be implemented to allow a rapid achievement of a target trough concentration by the estimation of ARC, which implies an adjustment of the dose of vancomycin, both in terms of loading and continuous infusion dose (15). Patients’ pathophysiological state and TDM results should always be stressed to adjust the dosage for individual administration.

A higher dose of vancomycin is needed in critically ill patients, especially those with ARC, and appropriate TDM-guided dose adjustment should be considered to achieve the targeted therapeutic range and to optimize the PK-PD properties. Further clinical studies are necessary to confirm these observations, which could help with the establishment of guidelines for vancomycin dosing strategy in ICU patients with ARC.

The authors thank the staff of the emergency ICU Department of Ruijin Hospital Affiliated to Shanghai Jiao Tong University School of Medicine, for their facilities and collaboration.

Reporting Checklist: The authors have completed the STROBE reporting checklist. Available at http://dx.doi.org/10.21037/tau-20-1048

Conflicts of Interest: All authors have completed the ICMJE uniform disclosure form (available at http://dx.doi.org/10.21037/tau-20-1048). The authors have no conflicts of interest to declare.

Ethical Statement: The authors are accountable for all aspects of the work in ensuring that questions related to the accuracy or integrity of any part of the work are appropriately investigated and resolved. Ruijin Hospital Institutional Review Board approved this study and the study was performed following the ethical standards laid down in the Declaration of Helsinki (as revised in 2013). Two hundred eighty patients were enrolled in the study, and informed consent forms were not available due to the retrospective and observational nature of the study.