Metastatic castration-resistant prostate cancer (mCRPC) remains a major concern because of its unavoidable lethality. Current management ‘only’ aims to prolong survival and the means to fulfill this objective include next-generation androgen receptor signaling inhibitors (ARSIs; abiraterone and enzalutamide and the recently approved apalutamide and darolutamide) and taxane-based chemotherapy (docetaxel, cabazitaxel and paclitaxel). The inevitable evolution of mCRPC to death implies that all patients receiving ASRI or chemotherapy will develop resistance to these agents, whether this resistance is primary (no response at treatment initiation) or secondary (initial response, which becomes exhausted and eventually disappears). When choosing between ARSIs and chemotherapy in clinical practice, there is clearly a tendency to favor ARSIs, presumed to be less toxic than taxanes whereas no randomized trials have been performed to compare taxane-based chemotherapy and ARSI in mCRPC. Some open studies performed comparisons that disclosed either no significant difference between the two regimen or improved outcomes with taxanes (1-6). Specifically after failure of first-line androgen-deprivation therapy, knowing if ARSI or taxane treatment will be more beneficial than the other or even if at least one or the other of these treatments will be effective would be an essential element of the therapeutic choice. In fact there is currently a severe shortage of a marker able to predict the response to these treatments in mCRPC patients. Such a marker, referred as theranostic, would therefore be a useful prerequisite towards personalization of treatment.

A recently published article by Howard Scher’s team relaunches the candidate for AR-V7, a variant of the androgen receptor (AR), as a theranostic marker of mCRPC (7). AR-V7 belongs to the growing family of AR variants which are produced from AR gene through structural gene rearrangement and alternative mRNA splicing (8). By contrast with the wild-type full-length AR (AR-FL, which contains four functional regions including the ligand-dependent transactivation domain and its binding site for natural ligands or antiandrogens), the truncated isoform AR-V7 lacks the C-terminal ligand-binding domain. It is therefore constitutively active: it does not need ligand binding to bind DNA responsive elements in AR target genes (its DNA-binding domain is conserved) and regulate their expression through its conserved N-terminal ligand-independent transactivation domain (8). In other words, AR-V7 is able to overcome androgen deprivation and therefore initiate all or part of the AR gene activation program even if androgens are lacking. It is therefore not surprising that its expression in prostate cancer cells has been soon correlated with poor prognosis (8,9). Even if studies have shown that AR-V7 gene activation program is in fact not exactly the same as the AR-FL program, AR-V7 expression became an important molecular mechanism to explain survival of androgen-dependent prostate cancer cells despite androgen deprivation, and consequently failure of castration (10,11). With other molecular mechanisms such as gene amplification, gene mutation or ligand-independent phosphorylation-mediated AR activation, production of truncated AR splicing variants is therefore a witness of the huge AR plasticity developed by tumor cells to overcome androgen deprivation.

The potential value of AR-V7 as a theranostic marker arose from the pioneer work of Antonarakis et al. in 2014: these authors not only suggested that AR-V7 expression is correlated with resistance to enzalutamide and abiraterone, but they also predicted its promising routine use by detecting its expression in circulating tumor cells (CTCs) (12). Biologically-significant circulating tumor materials (cells, DNAs, mRNAs) can indeed be detected in the bloodstream and used as witness of the intrinsic molecular biology of the tumors (13). Such characterization of circulating tumor materials has been called liquid biopsy to underline its ease of use in clinical practice. Using a modified version of the AdnaTest mRNA detection, Antonarakis et al. demonstrated that 39% and 19% of 31 enzalutamide- and 31 abiraterone-treated patients had detectable AR-V7 in CTCs, respectively, and that AR-V7-positive CTCs were significantly associated with shorter PSA response rate, PSA progression-free survival, clinical progression-free survival and overall survival (12). Of note, conversion from AR-V7-negative status to AR-V7-positive status was observed under enzalutamide or abiraterone treatment, suggesting that the presence of AR-V7 is at least revealed or even induced by these treatments (14). Several studies confirmed the theranostic role of CTC expression of AR-V7 (15), using the AdnaTest mRNA detection (epithelial cell adhesion molecule (EpCAM) enrichment capture followed by AR-V7 mRNA detection in pooled CTC aggregates) or variant techniques (16). A significant variation in AR-V7 detection came from the logical demonstration that nuclear AR-V7 expression is more clinically relevant than the sole mRNA identification in whole cells (17,18): AR-V7 can only exert its transcriptional activity when present in the nucleus and its cytoplasmic presence is likely to be biologically insignificant (19). This detection method uses the pathology slide-based Epic Sciences platform that allows assessment of AR-V7 protein presence and localization in individual CTCs as traditionally performed in tissue samples (19).

Propensity score analysis aims to address selection bias (as it happens here: ARSI or taxane) when random assignment is not feasible (20). To calculate a propensity score, the probability of assignment to a treatment has to be conditioned by a set of observed covariates. In short, in a (ideally) large cohort of patients receiving either of the treatments, multivariate logistic regression is first performed to associate assignment to a treatment with values specifically taken by interest covariates (see Table 1 for the covariate used in (7)). The obtained regression coefficients are then used to weight individual observations (propensity score weighting) and create new groups with characteristics similar to those created through random assignment. Graf et al. therefore measured physician propensity to choose either an ARSI or a taxane. They confirmed that physicians facing patients with mCRPC had a propensity to assign them to a taxane rather than an ARSI if the disease is more advanced (higher PSA, liver metastases, high alkaline phosphatase levels, bone metastases…) or if they were administered an ARSI immediately before (7). They also confirmed, after adjusting for physician propensity, that patients with nuclear-localized AR-V7 protein in CTCs had longer overall survival with taxanes over ASRIs. Conversely, AR-V7 negative patients trended to have longer overall survival on ARSIs over taxanes (7). Taken together, their results, obtained through the use of propensity score analysis reinforce the clinical value of the nuclear-localized AR-V7 biomarker in CTCs to guide treatment choice. 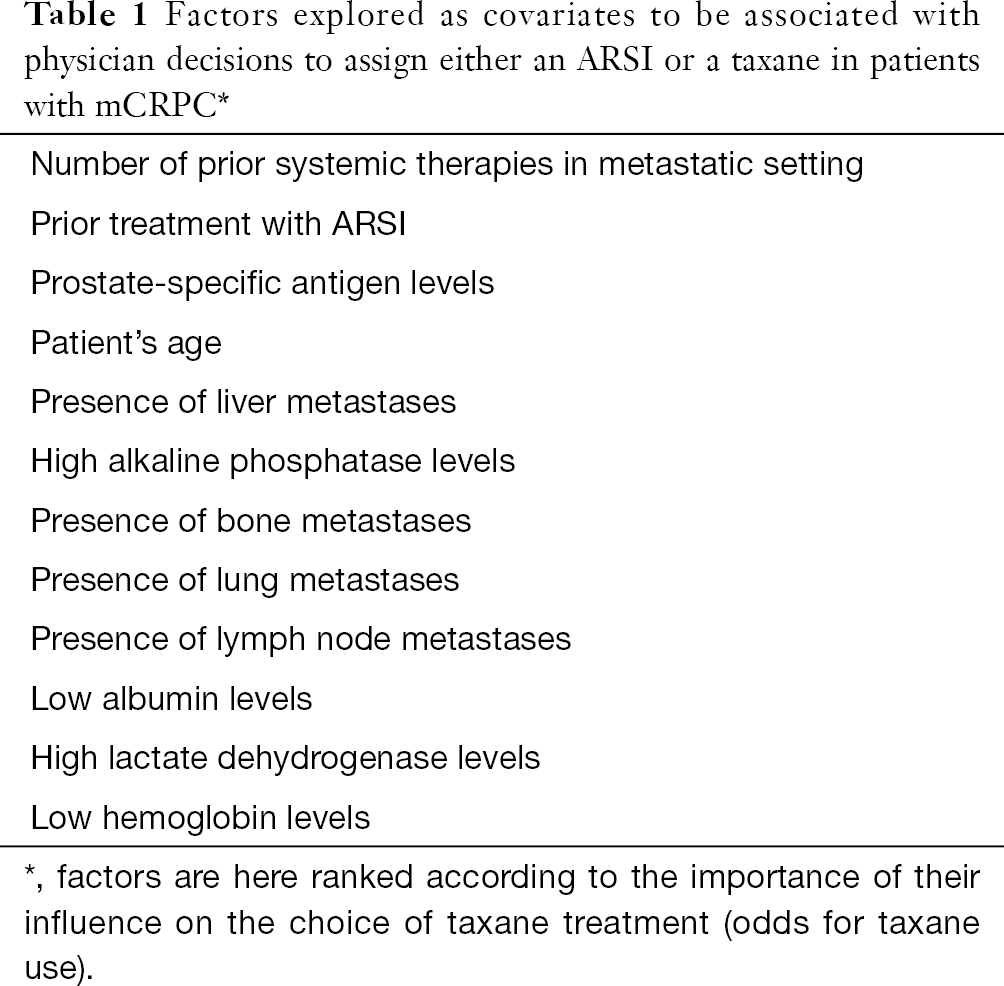 Authors of this relevant paper belongs to a team of experts both in the management of mCRPC but also in the use of the Epic Sciences platform. Whether their results would be applicable to all other centers, including those that do not have their expertise remains to be determined. First of all, they used the Epic platform and set the detection of the nuclear presence of AR-V7 as a standard. Many other authors, including pioneers (10,12,14,16), use a standardized AdnaTest mRNA detection method that detects presence of AR-V7 mRNA in the whole CTCs. Although nuclear localization of AR-V7 is required for target gene expression control, there is no clear demonstration that nuclear detection is more efficient than whole cell detection in predicting patients’ outcome under treatment. Whether AdnaTest mRNA detection would offer the same results is unknown. As stated by the authors themselves, precise AR-V7 subcellular localization requires scoring criteria to class CTCs as positive for nuclear AR-V7 staining: at least one CTC with an intact nucleus and nuclear-localized signal-to-noise level above an established background intensity per two pathological slides tested (7,17-19). The authors previously checked the analytical specificity of AR-V7 detection (19): AR-V7-negative and AR-V7-positive tissues as determined by the team’s pathologist(s) were included as part of a tissue microarray panel and were confirmed by the microarray evaluation as negative or positive. Whether another pathologist, less experienced in AR-V7 subcellular localization, would have obtained the same results remains to be determined. Another subject of caution is the choice of the covariates used by the expert team to perform their propensity score analysis: whether other teams use the same covariates with the same degree to choose treatment options in mCRPC patients cannot be ascertained. At least, even if cross-resistance is strongly suspected between next-generation ARSIs (apalutamide, darolutamide) and enzalutamide or abiraterone (21), it remains to ascertain whether AR-V7 detection is valuable and reliable before choosing these new ARSIs too.

AR-V7 detection in CTCs is a promising theranostic marker to help treatment decision in mCRPC patients. Although first publications appeared 6 years ago, several points still need clarification such as the detection method (subcellular fractions or whole cells—mRNA detection or antibody-directed protein staining) and the broad applicability as a routine assay in every urological or oncological team. Despite the unavoidable need of confirmation by other studies, the work presented by Graf et al. (7) is highly significant in that it affords solid arguments to consider nuclear AR-V7 as a valuable tool coming in addition to clinical criteria to choose between ARSIs and taxanes in the complex situation of mCRPC. When and how this tool will/would be integrated in valuable guidelines and therefore available in routine practice still remains to be determined.

Provenance and Peer Review: This article was commissioned by the editorial office, Translational Andrology and Urology. The article did not undergo external peer review.