U-shaped relationship of age at diagnosis and cancer-specific mortality in primary urachal adenocarcinoma: a cohort study

Bladder cancer is the most common cancer of the urinary system, with urothelial carcinoma constituting greater than 90% of pathological types. Urachal cancer is a rare form of tumor associated with a high degree of malignancy, late staging and poor prognosis, accounting for approximately 0.2–0.5% of all malignant tumors of the bladder (1-3). Adenocarcinoma is the most common histological subtype of urachal carcinoma (4,5). Primary urachal adenocarcinoma has been rarely studied due to its low incidence. Case series provide most of the available evidence in the medical literature. It has previously been observed that several disease-specific factors (e.g., stage of the disease (1,5-7), histologic subtype (6), presence of positive margins after surgery (8,9), pathological tumor grade (5,10), presence of positive lymph nodes and type of surgery (8) were closely related to the prognosis.

Age is known to be an important predictor in many tumors (11-14). However, the influence of age at diagnosis on outcomes in patients with primary urachal adenocarcinoma remains unclear. Ashley et al. analyzed the 50 years data from Mayo Clinic and concluded that older age was associated with malignant cell in a urachal mass (8). Wright et al. evaluated 151 patients in the National Cancer Institute’s Surveillance, Epidemiology, and End Results program (SEER) database and demonstrated that age was not an independent prognostic factor in urachal adenocarcinoma (6).

Understanding the association of age at diagnosis and outcomes may not only have prognostic implications but may also have important therapeutic significances for the development of molecular targeted cancer therapy and personalized medicine (13). In our study, we evaluated data from a large, nationwide, population-based database to investigate the effect of age at initial diagnosis on cancer-specific mortality (CSM) of primary urachal adenocarcinoma patients. We present the following article in accordance with the STROBE reporting checklist (available at http://dx.doi.org/10.21037/tau-19-863).

We used a retrospective cohort study design. The data was obtained from the National Cancer Institute’s SEER program, which includes approximately 28% of the U.S. population. We used the International Statistical Classifications of Diseases for Oncology, 3rd edition (ICD-O-3) site codes C677 and histology codes 8140–8147 and 8255–8490 to identify primary urachal adenocarcinoma. Additional inclusion criteria were as follows: (I) urachal adenocarcinoma that was the first malignancy; (II) patients for whom information about CSM, duration of survival (in months), and therapy provided were available; and (III) diagnosis was by histological confirmation only. Cases diagnosed by clinical presentation, radiography, or autopsy alone were excluded.

We were granted permission from the National Cancer Institute USA to access the SEER dataset for research purposes only (reference number: 18015-Nov2017). All the data from the SEER database were de-identified, and the extracted data did not require informed consent.

Continuous variables such as age are presented as median and interquartile range median (IQR). Categorical variables such as race are presented as counts and percentages. Two-sample t-test was used for continuous variable analysis, and chi-square test was used for continuous variable analysis. Univariate Cox regression analysis was performed to identify potential risk factors. After factors were identified, we explored the nonlinear relationship between age at diagnosis and cancer-specific survival using a smoothing plot. Using a trial method, the inflection point of age at diagnosis at which the relationship began to change was identified. The trial inflection point was moved along a predetermined interval to detect the inflection point to obtain the maximum model likelihood (15,16). Survival time between the different groups was compared using Kaplan-Meier survival curves. The X-tile software was used to identify the best cutoff value in the Kaplan-Meier curves. Then we used multivariate Cox regression model and a two-piecewise Cox regression model to explore the relationship of age at diagnosis on cancer-specific survival according to the smoothing plot. The log-rank test was used to compare the two curves. Data were analyzed using the statistical package R (the R foundation; http://www.r-project.org;version3.4.3) and EmpowerStats software (www.empowerstats.com, X&Y solutions, Inc. Boston MA). 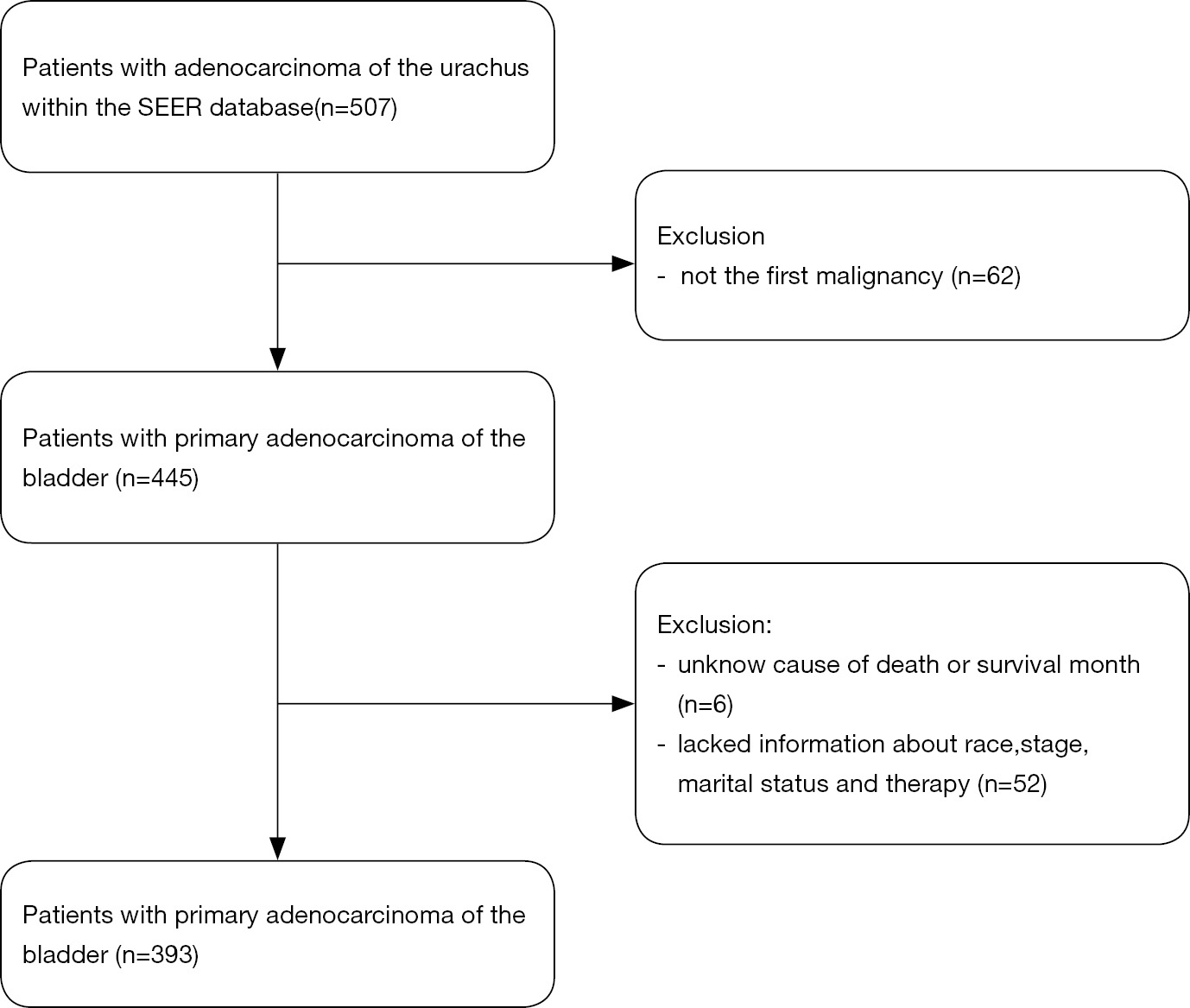 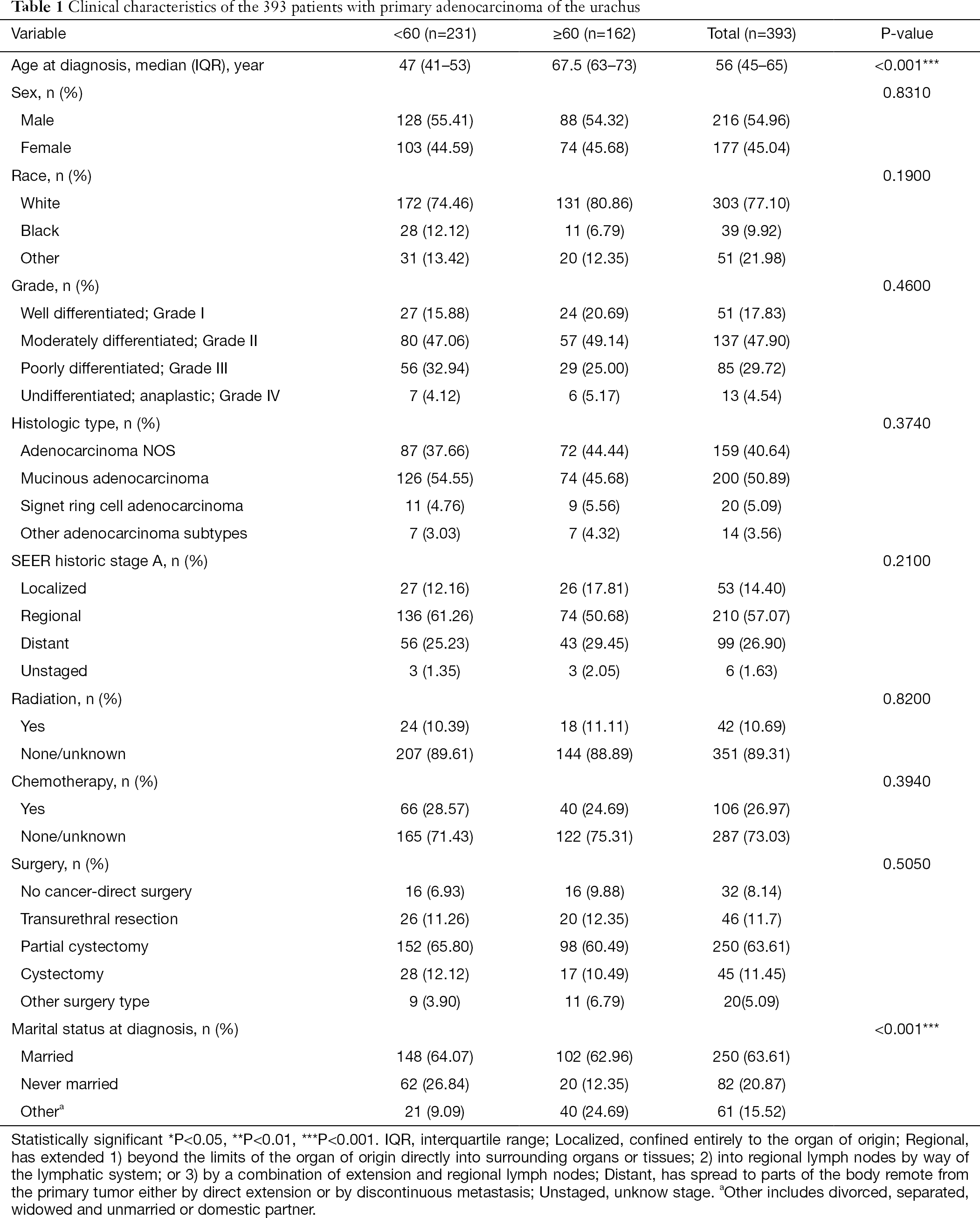 Correlation between age at diagnosis and cancer specific death 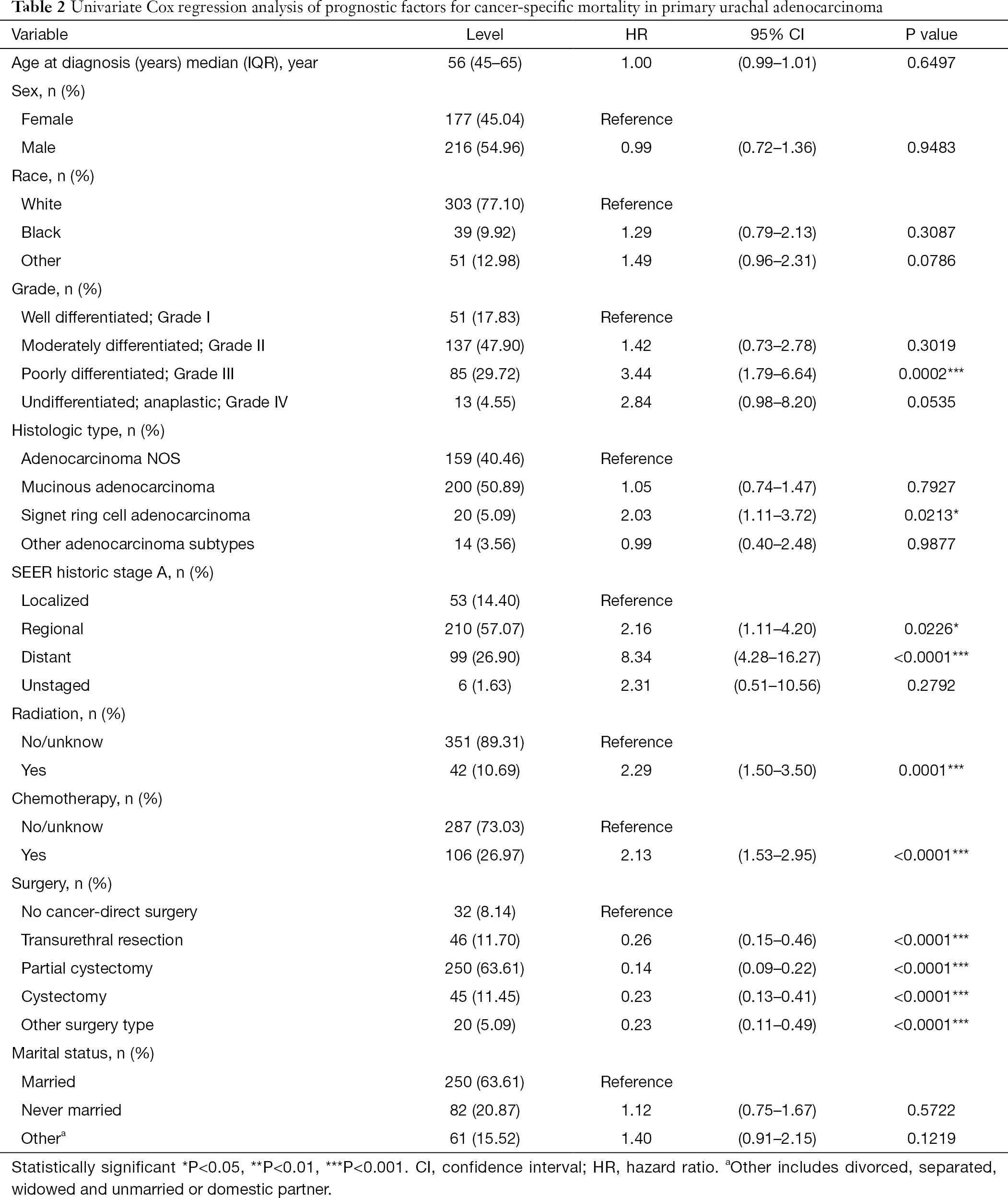 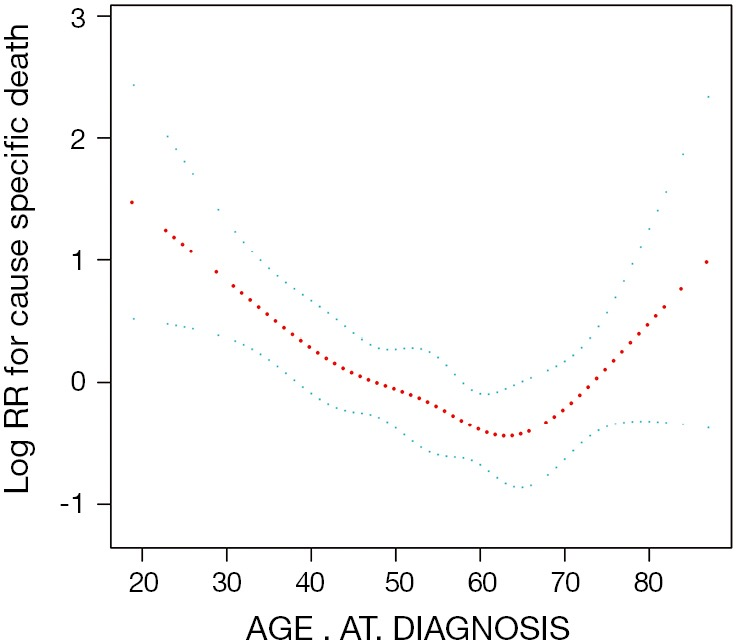 Figure 3 Kaplan-Meier curves of cancer-specific mortality in patients <60 years old (A); ≥60 years old (B); in the entire cohort (C).

The urachus is a remnant of the allantois and forms the medial umbilical ligament after birth. Urachal carcinoma occurs mostly in the patent urachal duct (17). Urachal cancer is a rare malignant tumor, first described by Begg in 1930 (18), representing less than 1% of bladder cancers. The median diagnosis age is 52 years which is earlier than that of non-urachal adenocarcinoma (8,10,19).

Several staging approaches have been proposed for urachal cancer (e.g., the Sheldon system and the alternative Mayo, Ontario, and TNM systems). However, no staging system has been verified (7,8,10). In this study, we used the SEER historic stage A (localized, regional, distant and unstaged) classification system because it is the only staging system that was used continuously throughout the study period from 1973–2015. Several studies have shown that the presence of an advanced stage is associated with a poor prognosis (1,6,7).

In this study we found that the relationship between age at diagnosis and mortality is nonlinear and takes on a U-shaped curve. Both younger and older ages at initial diagnosis were associated with increased CSM. The risk of cancer-specific death in older patients (≥60 years) was markedly increased, which may be expected considering the possibility of less healthy patients, decreased overall life expectancy, and inability to tolerate invasive surgery or other regimens. Survival outcomes are not necessarily improved in younger patients, although they are generally healthier and have fewer comorbidities than older patients, which may reflect differing biology. This finding is contrary to results of previous studies in which age at diagnosis was not an independent covariate associated with CSM in patients with primary urachal adenocarcinoma (6). A possible explanation for this might be that the non-linear association is difficult to identify using a single-piecewise cox regression model. In the era of molecular targeted cancer therapy and personalized medicine, our finding may have both important prognostic and therapeutic implications (28).

We should admit that there are some limitations in our research. First, our research was retrospective, which is inevitably associated with selection bias. Second, the distinction between urachal and non-urachal primary adenocarcinoma has always been a challenge problem in clinically and pathology (29-31). Therefore, there is a potential misclassification bias. Considering this situation, we performed an additional analysis after excluding the primary site of dome lesions; however, there was no significant change in our result (not shown in the article). Third, the SEER database lacks information about treatment strategies, family history, occupation, tumor markers, biochemical factors and immunological factors, which may cause bias. However, this is a real-world study based on a large sample, and these limitations do not weaken our conclusions.

In summary, our study suggested that the relationship between age at diagnosis and cancer-specific survival is nonlinear and takes on a U-shaped curve. Both younger and older ages at initial diagnosis were associated with increased CSM. Further studies are needed to evaluate the actual role of age at diagnosis in CSM as well as the underlying biological mechanism.

The authors are grateful to all the staff at the National Cancer Institute (USA) for their contribution to the SEER program.

Reporting Checklist: The authors have completed the STROBE reporting checklist. Available at http://dx.doi.org/10.21037/tau-19-863

Conflict of Interest: All authors have completed the ICMJE uniform disclosure form (available at http://dx.doi.org/10.21037/tau-19-863). The authors have no conflicts of interest to declare.

Ethical Statement: The authors are accountable for all aspects of the work in ensuring that questions related to the accuracy or integrity of any part of the work are appropriately investigated and resolved. We were granted permission from the National Cancer Institute USA to access the SEER dataset for research purposes only (reference number: 18015-Nov2017). All the data from the SEER database were de-identified, and the extracted data did not require informed consent.