Expression of VEGF, CD73 and their relationship with clinical pathology, microvessel density, and prognosis in renal cell carcinoma

Renal cell carcinoma (RCC), a tumor originating from renal tubular epithelial cells, has the second highest incidence of any adult urogenital tumor. However, fewer than 15% of RCC patients have observable local symptoms, and, in most cases, patients exhibit no obvious symptoms in the early or even late stages of the disease, which seriously affects the prognosis (1). Tumor neovascularization is a key process in tumor proliferation, invasion, and metastasis. Microvessel density (MVD) can be indicative of the number of blood vessels in tumor tissues and has a close relationship with tumor prognosis (2). The diagnosis and prognosis of RCC are related to a variety of molecular markers, including molecular of tissue source, serum source and urine source, which have been extensively and deeply studied by scholars. Vascular endothelial growth factor (VEGF), as a pro-angiogenic factor, can promote angiogenesis by changing the extracellular matrix and increasing the permeability of blood vessels. And it may be related to MVD (3). Once the tumor occurs, expression of VEGF will be activated and secreted periodically, resulting in increased vascular permeability, plasma protein extravasation and fibrin aggregation of the tumor, further maintaining the infinite growth of the tumor and providing a basis for tumor invasion and metastasis (4). Multiple studies have shown that VEGF is an independent predictor of the prognosis of RCC patients (5). Extracellular 5'-nucleotidase (CD73) is a key enzyme in the production of extracellular adenosine. Highly expressed in a wide range of tumor tissues, CD73 participates in tumor immunosuppression and influences prognosis (6). CD73 has been shown in recent studies to be highly expressed in lymphatic lymphocytes and vascular cavity cells, which can enhance the vascular endothelial barrier function, induce angiogenesis. It is also closely related to tumor neovascularization (7). This study aimed to analyze the expression of vascular VEGF and CD73 and their relationship with clinical pathology, microvessel density (MVD), and prognosis in RCC, and to explore the mechanism of high VEGF and CD73 expression levels in cancer tissues, and their significance and value in treating RCC.

We present the following article in accordance with the STROBE reporting checklist (available at http://dx.doi.org/10.21037/tau-20-904).

The clinical data of 76 patients with RCC who underwent radical nephrectomy between October, 2011 and October, 2013 in the Affiliated Hospital of Chengdu University of Traditional Chinese Medicine were retrospectively analyzed, and the postoperative paraffin specimens were collected. Patients were included if they: (I) had not received antitumor treatment before surgery; (II) had RCC pathologically confirmed after surgery; (III) were not lost to follow-up after surgery; and (IV) had well-preserved paraffin specimens. Patients were excluded if they: (I) had undergone radiotherapy or chemotherapy or taken other antitumor drugs before surgery; (II) had other serious diseases, such as dysfunction of important organs; or (III) had incomplete clinical data.

Detection of VEGF and CD73 by immunohistochemistry (IHC)

The specimens were fixed, dehydrated, and paraffinized. Followed by being sliced at 4 µm using a microtome, dried in an incubator, conventionally dewaxed with water, antigen-repaired by EDTA. The specimens were treated with 3% hydrogen peroxide in order to remove endogenous peroxidase, and blocked in serum solution for 10 min. Then, primary antibody was added and the specimens were incubated at 4 °C overnight. Biotin-labeled secondary antibody, horseradish-labeled streptavidin, and DAB coloration were added sequentially, before the specimens were counterstained with hematoxylin, dehydrated with gradient ethanol, rendered transparent with xylene, and mounted with neutral balsam. A breast cancer specimen was used as a positive control, and PBS was used in place of the primary antibody as a negative control.

The total RNA in RCC tissues was extracted using the TRIzol kit, and the purity and concentration of it was determined by spectrophotometer. The cDNA synthesized using the reverse transcription kit, according to the instructions to reverse transcribe 1 µg of RNA for each reaction. And then using RT-PCR instrument (Roche, Switzerland) for PCR amplification and followed by drawing dissolution curve after the amplification. The relative expression of VEGF and CD73 on the mRNA levels were calculated as 2-ΔΔCt.

The protein expression of VEGF and CD73 was detected by Western blotting. First, 30 mg tissue was taken, crushed, and lysed with RIPA lysis (supplemented with an appropriate amount of protease or phosphatase inhibitor), and ultrasound to obtain supernatant. After then quantified the concentration using BCA kit, the proteins of equal concentration were separated by the SDS-PAGE gel electrophoresis, transferred onto the membrane, incubated with primary and secondary antibodies, and finally detected using the ECL reagent. The relative protein expression levels of VEGF and CD73 were calculated by semi-quantitative analysis with gel analyzer.

All statistical analyses were performed using SPSS 20.0 software [IBM Corporation (SPSS Co.)]. Categorized data of VEGF and CD73 expression were expressed as n (%). Non-ranked data was analyzed by chi-square test, and rank data by rank-sum test. Continuous data such as MVD were expressed as mean ± SD (±s) and analyzed using t-test. The correlation between the expression of VEGF and CD73 and MVD was analyzed by Spearman’s correlation analysis. Results with P<0.05 were considered to be statistically significant.

All procedures performed in this study were in accordance with the Declaration of Helsinki and the study was approved by Chengdu University of Traditional Chinese Medicine (No. SYXK-20200037). Because of the retrospective nature of the research, the requirement for informed consent was waived.

The expression of VEGF and CD73 in RCC tissues 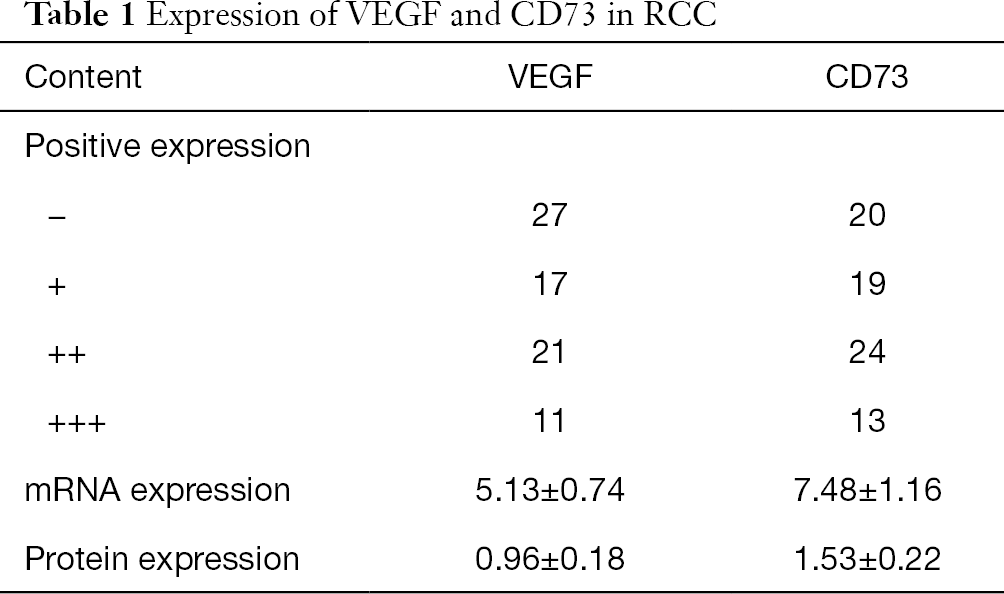 Table 1 Expression of VEGF and CD73 in RCC
Full table 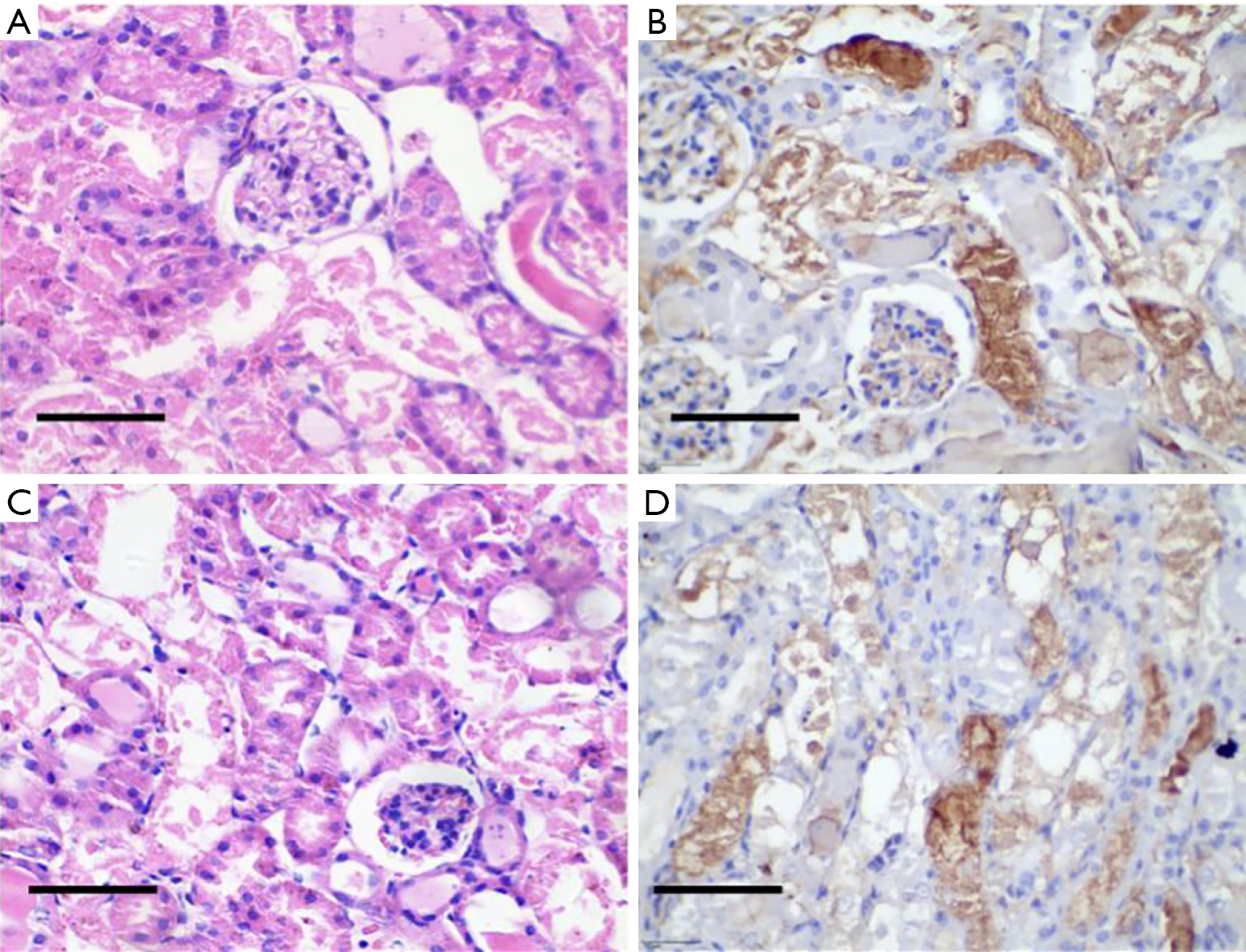 Correlation between VEGF and CD73 expression and MVD

As of October 30, 2018, after 5 years of outpatient or telephone follow-up, 45 patients had survived and 31 patients had died. The causes of death were all related to the recurrence or metastasis of the primary tumor.

Correlation between the expression of VEGF and CD73 and prognosis

As revealed by a study in 2018, the incidence of RCC in China in 2014 was approximately 4.99/100,000, and was accompanied by a mortality rate of 1.87/100,000. Despite the rates of morbidity and mortality not being high, but the rates have increased significantly in recent years (11). RCC can easily metastasize and mostly does so through the lymphatic and hematological systems. Tumor neoangiogenesis supplies nutrients to support the proliferation of cancer cells in RCC, but also directly facilitates its invasion further (12).

Tumor angiogenesis is a key factor of supporting tumor growth. The vascular network can be developed and maintained by the continuous expression of VEGF, which can promote tumor growth and metastasis (15). Therefore, the results of this study indicated VEGF expression to be closely related to tumor malignancy, invasion ability, and metastasis in RCC. As a powerful vascular permeability factor, the ability of VEGF to enhance microvascular permeability is 50,000 times that of histamine (16). It can also increase the permeability of tumor blood vessels and cause extravasation of circulating macromolecules such as fibrin and plasma proteins, thus forming a fibrous extracellular matrix that can support fibroblasts and endothelial cells endogenously, and creating the basis substance of tumor cell growth and neovascularization (17). In the same study it was found that patients with high expression levels of VEGF accounted for a higher proportion of those with poor prognosis, and the 5-year mortality rate of VEGF-positive patients was significantly higher than that of VEGF-negative patients, which indicates that VEGF could serve as a predictor of poor prognosis in patients with RCC. VEGF overexpression reflects the aggressiveness and degree of active growth of the tumor, promotes neovascularization, and paves an easier path for the local recurrence and distant metastasis of tumors (18).

This study showed that the positive expression rate of CD73 was higher in RCC patients with grades G3–G4, stages III–IV, and lymph node metastasis, which suggests that CD73 expression is also closely related to tumor malignancy, invasion ability, and metastasis in RCC. Adenosine, which is found in abundance in the tumor microenvironment, is a key contributor to anti-tumor immunosuppression. CD73 is pivotal in the production of adenosine and shows significant immunosuppressive activity (19). As well as hypoxia and adenosine-rich conditions, other important factors in the upregulation of CD73 expression in tumor tissues include high levels of transforming growth factor β (TGFβ), interferon, and tumor necrosis factor (TNFα) in the tumor microenvironment (20). The results of a study by Ghalamfarsa et al. evidenced the close relationship between CD73 and tumor neovascularization, and showed that its high expression in lymphatic lymphocytes and vascular lumen cells could enhance vascular endothelial barrier function and induce angiogenesis, while less angiogenesis occurred in CD73-deficient mice (21). In this study, the MVD count of patients with positive CD73 expression was higher than that of patients with negative CD73 expression, and it was significantly positively correlated with the expression level of CD73. This indicates that the expression of CD73 in tumor tissue of patients with RCC could also reflect the microvascular formation status of a tumor. A similar phenomenon has also been discovered in non-small cell lung cancer tissues, which suggests that CD73 may be related to the neovascularization of various malignancies (22). It has been observed in previous literature that cells with CD73 high expression show more resistance to radiation and DNA-damaging agents (23). Therefore, the high expression of CD73 in RCC tumor tissues might not only influence tumor immunosuppression, development, metastasis, and tolerance to chemoradiotherapy, but might also promote tumor neovascularization, resulting in tumor proliferation, development, and deterioration, thus affecting patient prognosis. This study also showed that patients with positive CD73 expression had a higher five-year mortality rate and a poor prognosis. Therefore, CD73 could be used to evaluate the poor prognosis of patients with RCC. However, there are still limitations in this study. The number of cases included is small and it is a single-center study, so more cases need to be included in the follow-up study to further support the above conclusions.

In summary, the expression of VEGF and CD73 in RCC tumor tissues can reflect the degree of malignancy of tumors as well as their invasion and metastasis ability. VEGF and CD73 are closely related to microvessel formation in cancer tissues and the poor prognosis of patients, and could provide great value in the evaluation of RCC prognosis.

Reporting Checklist: The authors have completed the STROBE reporting checklist. Available at http://dx.doi.org/10.21037/tau-20-904

Conflicts of Interest: All authors have completed the ICMJE uniform disclosure form (available at http://dx.doi.org/10.21037/tau-20-904). The authors have no conflicts of interest to declare.

Ethical Statement: The authors are accountable for all aspects of the work in ensuring that questions related to the accuracy or integrity of any part of the work are appropriately investigated and resolved. All procedures performed in this study were in accordance with the Declaration of Helsinki and the study was approved by Chengdu University of Traditional Chinese Medicine (No. SYXK-20200037). Because of the retrospective nature of the research, the requirement for informed consent was waived.