Nutrients from fruit, vegetable and micronutrient are well known antioxidants in that they can affect the cell growth and differentiation of prostate, which may reduce the potential risk of benign prostatic hyperplasia (BPH) with lower urinary tract symptoms (LUTS) (1-3). Although several studies have focused on this issue, their results were conflicting, especially regarding LUTS, and moreover, there has been limited evidence regarding the relationship between sodium preference and LUTS.

Recently, sodium preference has been focused widely on throughout the whole medical field including hypertension (HTN), cardiovascular disease (CVD), and chronic kidney disease (CKD) (4-6). From the view of global health, sodium intake is an important issue because it is directly related with CVD mortality (7,8).

Among BPH/LUTS, urinary storage symptoms were more prevalent in HTN patients than in patients without HTN (5). Indirect effect of sodium intake with LUTS lies in the hyperactivation of the autonomic nerve system, especially innervation of prostate and bladder (12). Moreover, HTN induced by sodium intake could diminish treatment efficacy of alpha blockers (10). Among the nutrients, protein intake was a risk factor for aggravating voiding symptoms, and sodium intake was a risk factor for storage symptoms and for the need of prostatic surgery due to severe BPH (2,13). The direct effects of sodium on LUTS are mostly introduced by experimental studies (6,11). High sodium intake could evoke storage symptoms by the upregulation of epithelial sodium channel.

The main hypothesis of this study is that sodium preference may indirectly impact BPH/LUTS via aggravation of the circulation system including BPH, hyperactivation of adrenergic nerve system, and direct stimulation of the bladder epithelium. We investigated the association between sodium preference and LUTS, and we also investigated possible moderator effect of fruit and vegetable intake. We present the following article in accordance with the SURGE reporting checklist (available at http://dx.doi.org/10.21037/tau-19-808).

This study used data obtained from the 2011 Korean Community Health Survey (KCHS) for cross-sectional analysis. This study has been approved by Institutional Review Board of Soonchunhyang University Seoul Hospital. The KCHS has been conducted annually since 2008 by the Korean Centers for Disease Control and Prevention in order to produce community-based comparable health statistics for the evaluation of disease prevention programs and community health promotion. The KCHS used multistage sampling design so as to ensure national representativeness. First, a primary sampling unit was extracted through the number of households in each of the smallest governmental administrative units using a probability proportionate to the size sampling method. Next, five sample households on average were extracted in sampling point using systematic sampling methods. Finally, every member of a household who was 19 years or older were interviewed (14). In KCHS, a trained investigator visited the selected households and conducted a face-to-face interview. At least three visits were made to the target household to minimize selection bias. This study excluded 142,589 respondents who were female, who reported currently receiving treatment with prostatic hyperplasia to prevent the bias that may affect on LUTS, who have missing data in International Prostate Symptom Score (IPSS), dietary behavior variables, or covariates. Finally, 86,637 respondents were included in study subjects (Figure 1). 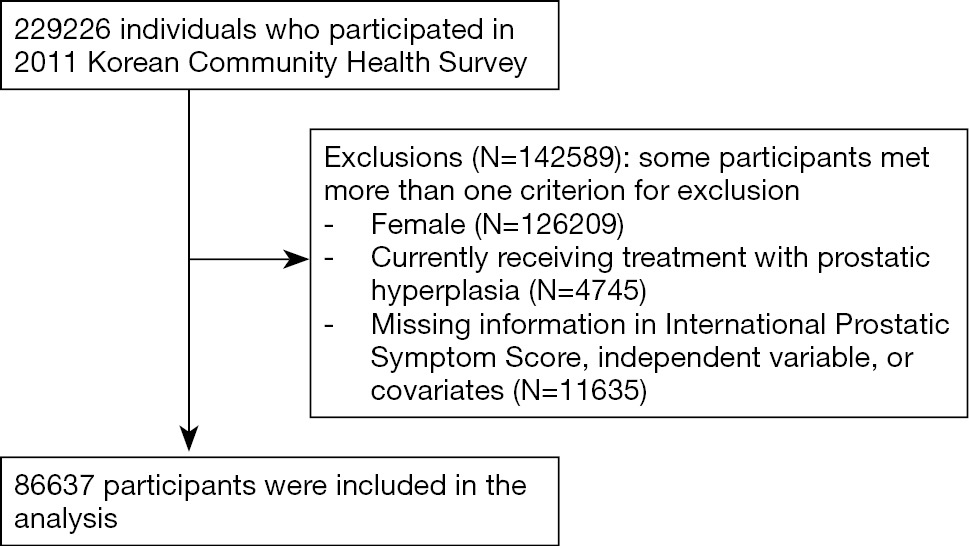 The covariates considered socio-demographic factors, comorbidities, and dietary behaviors. The socio-demographic variables included age, marital status, education level, household income, and residence. Age was categorized as “19–29”, “30–39”, “40–49”, “50–59”, “60–69”, “70–79”, “80–89”, and “90 or higher”. Marital status was categorized into four categories, corresponding to either “married”, “separated, divorced, or widowed”, or “never married”. Education level was categorized as “elementary school graduate or lower”, “middle school graduate”, “high school graduate”, or “college graduate or higher”. Household income was divided into quartiles. Residence was based on 16 governmental administrative districts and categorized as “capital” (Seoul), “urban” (included Busan, Daegu, Incheon, Gwangju, Daejeon, and Ulsan), or “rural” (included Gyeonggi, Gangwon, Chungbuk, Chungnam, Chungbuk, Chungnam, Jeonbuk, Jeonnam, Gyeongbuk, Gyeongnam, and Jeju). Comorbidities were comprised of hypertension, diabetes mellitus, and dyslipidemia which showed the highest prevalence rates among adults (15). These were assessed by the physician’s diagnosis and based on responses to questionnaires. Dietary behaviors included breakfast eating, intake of fruit, and intake of vegetable. The breakfast eating was ascertained by the question, “How many days do you eat the breakfast in last week?” Responses were classified into “5–7 days”, “1–4 days”, or “Never eat in last week”. The intake of fruit and vegetable were assessed on a monthly basis. Responses of “3 times/day”, “2 times/day”, “1 time/day”, “less than 1 time/day”, and “never eat in last month” were categorized into “once or more/day”, “less than once/day”, or “never eat in last month”.

Descriptive analysis was conducted in order to describe the socio-demographic and LUTS characteristics of the study population. The frequency and percentage by IPSS grade were reported. A Chi-squared test was performed in order to identify the group differences. Considering the characteristics of each dependent variable, a set of multivariable regression models were estimated in order to investigate the relationship between LUTS measured by IPSS and salt intake among Korean male adults. The negative binomial regression (for the IPSS total, IPSS voiding, and IPSS storage symptoms), ordinal logistic regression (for the IPSS grade), and binomial logistic regression (for the IPSS nocturia symptoms) were conducted so as to adjust the independent variables and covariates. The adjusted odds ratio (OR) or coefficient from each model with 95% confidence interval (CI) estimates were reported by applying complex sampling design and benchmark weight from KCHS to ensure the reliability. In order to differentiate the effect between socio-demographics, comorbidity covariates, and dietary behaviors, a two-step approach was used. The first model was adjusted for socio-demographic factors and comorbidities. The second model was additionally adjusted for dietary behaviors. All statistical procedures were carried out using Stata version 14.2 (StataCorp LP, College Station, Texas, USA). The threshold for statistical significance was 0.05 (two-tailed).

Table 1 summarized the socio-demographic and LUTS characteristics of study subjects. Among 86,637 study subjects, 77,332 (89.3%) were classified as “mild”, 7,525 (8.4%) were “moderate”, and 1,777 (2.1%) were “severe” symptoms according to IPSS grade. Those who being older, separated, divorced, or widowed in marital status, lower education level or household income, residing in rural region, having hypertension, diabetes mellitus, or dyslipidemia, regularly eat breakfast, eat less fruit or vegetables, and prefer salty taste were tending to be have worse IPSS grade condition compared to their counterparts. The distribution of study subjects by IPSS grade showed significant difference in all the independent variables and covariates (P<0.01). 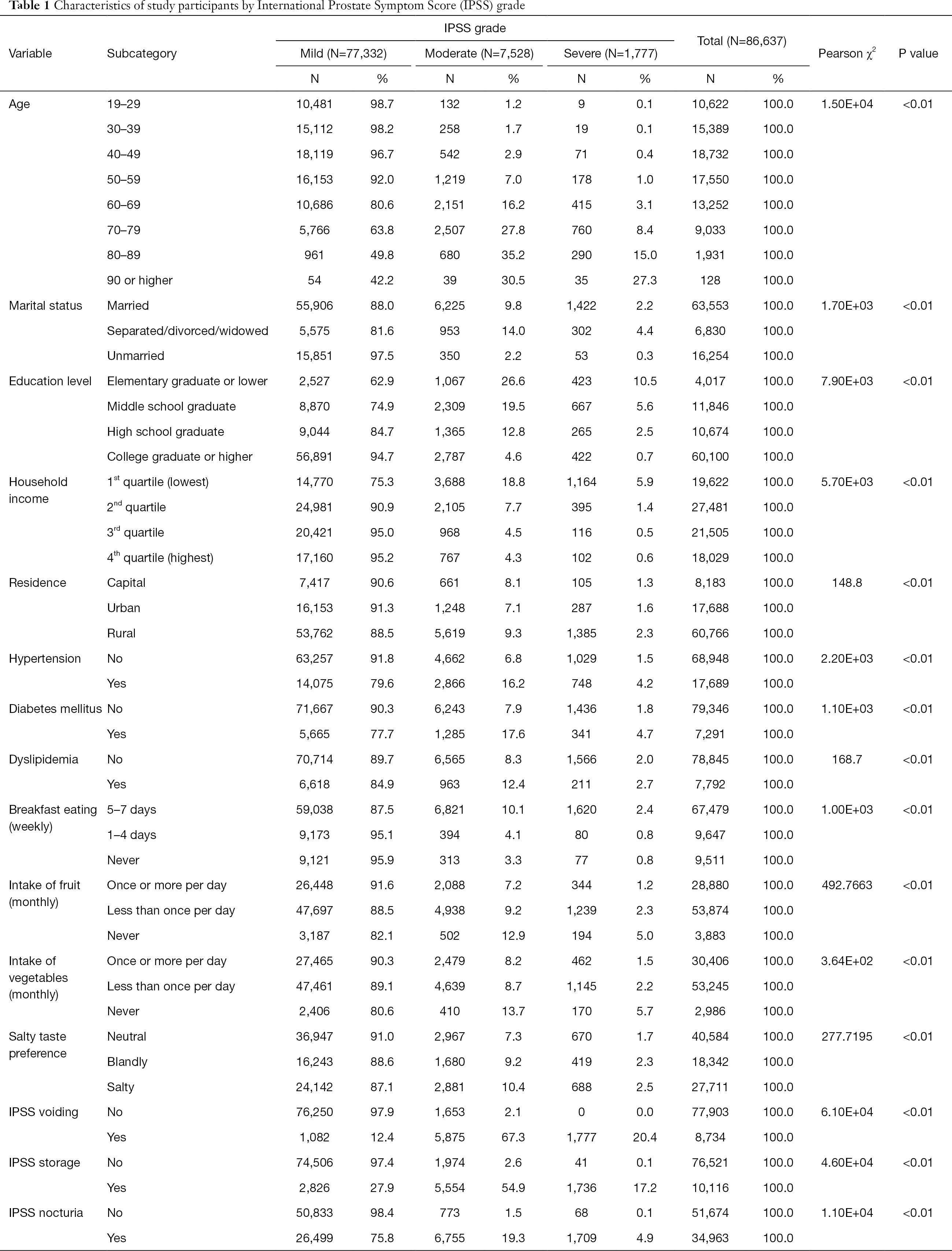 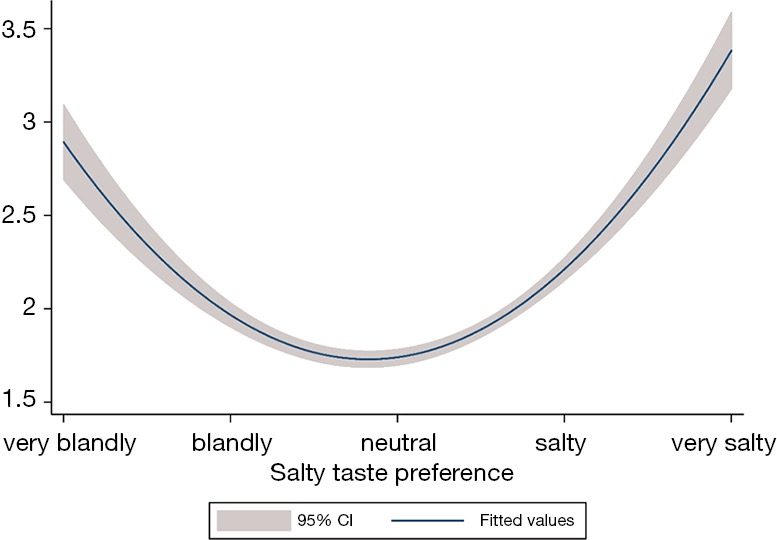 Figure 2 Distribution of severity of lower urinary tract symptoms according to degree of sodium preference. 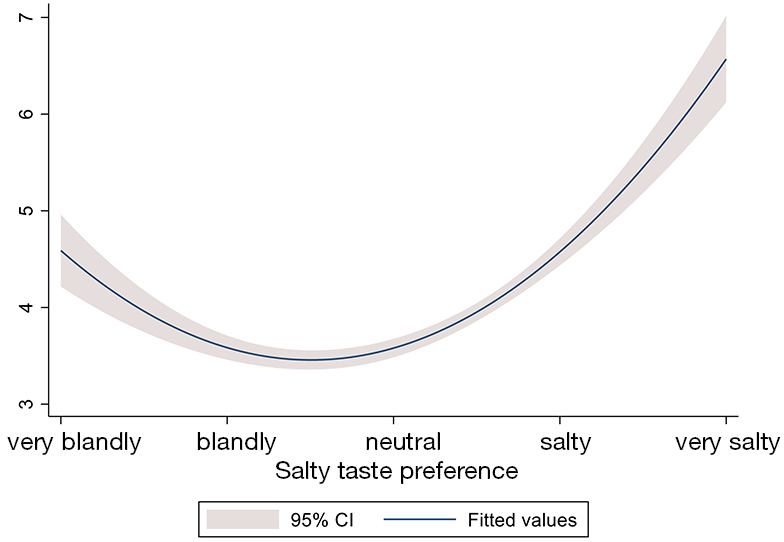 Figure S1 Distribution of severity of lower urinary tract symptoms according to degree of sodium preference: aged 50 or higher. 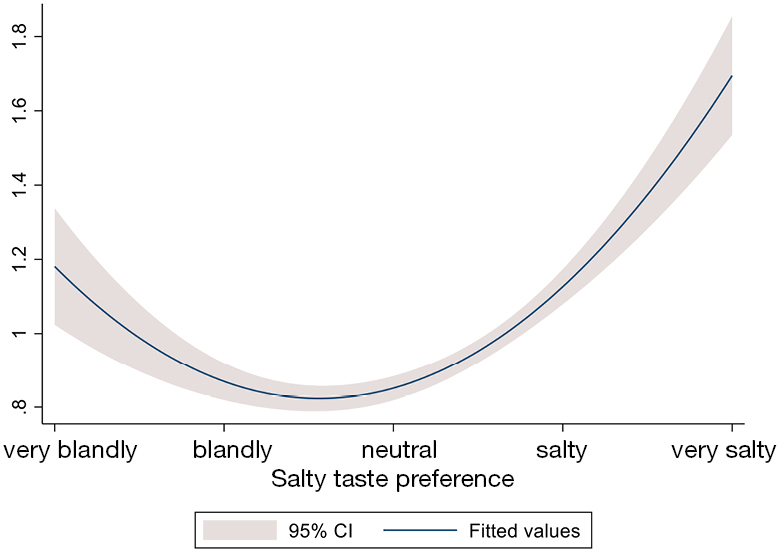 Figure S2 Distribution of severity of lower urinary tract symptoms according to degree of sodium preference: aged under 50.

Sodium preference is a crucial issue considering its potential impact on the circulation system, which it is well known that sodium preference aggravates HTN and increases CVD mortality (7,8,16). Considering the close and complex links among HTN, metabolic syndrome, artherosclerosis, fatty liver, and BPH/LUTS, it could be postulated that not only HTN but other circulatory components may influence BPH/LUTS as well.

To date, only limited evidence exists regarding the association between sodium intake or preference and the severity of LUTS. Maserejian et al. (2) reported that sodium intake showed a significant positive association with LUTS in their cross-sectional analysis of random population sampling. Although they reported that men with higher sodium intake were likely to have a higher severity of LUTS (OR =2.25; 95% CI, 1.26–4.03), this linear trend was strong for storage LUTS specifically and there was no consistent association for voiding LUTS. Tavani et al. (13) reported in their case-control study that sodium intake was related with significant high risk (OR =1.30) for the diagnosis of surgically treated BPH.

Other indirect effects include neurotransmitters such as catecholamine which is overexpressed in HTN. Increased sympathetic activation and neurotransmitters stimulate not only the bladder but also the prostate such that they affect smooth muscle tone in prostate, which aggravates the BPH/LUTS (21). Sympathetic hyper-innervation also charges for the pathogenesis of BPH, which could result in ventral prostate hyperplasia (22). Moreover, nerve growth factor is involved in the pathogenesis of BPH in response to sympathetic hyper-innervation (23). In our study, not only storage LUTS but also voiding LUTS was significantly related with sodium intake.

Although we have performed thorough analysis, there are still several limitations remaining. First, cross-sectional study design hampers the establishment of a causal effect of sodium preference on the severity of LUTS. However, designing a randomized controlled trial with this issue is not easy. Second, BMI data is missing in our analysis. Although several studies have showed that obesity is related with the severity of LUTS (27), to date, the association between BMI and severity of LUTS remains controversial (28). Third, the degree of sodium preference has been measured by subjective questionnaire. Measurement of urinary sodium is important to truly quantify the degree of sodium preference, as shown in other studies (8).

Fourth, respondents who may have poor nutritional or eating habits were excluded from the study due to missing information in socioeconomic factors. Those who refuse to report characteristics such as household income or education level tend to be have low socioeconomic status which might be associated with bad dietary patterns or nutrition quality. Lastly, the U-shaped distribution between sodium preference and the severity of LUTS could not be fully explained. However, as shown in the similar distribution between sodium preference and CVD mortality, reverse causation could be a possible factor for explaining the association between low sodium preference and aggravation of LUTS, which implies that those patients with HTN or CVD are not willing to intake sodium to prevent future CVD aggravation. However, in our study, the U-shaped distribution was still consistent after adjusting for HTN. Another possible reason for this U-shaped distribution is the activation of the renin-anagiotensin-aldosterone (RAA) system. As is well known, sodium is an essential component for maintaining human physiology and a level of below 3.0 g/day could cause the activation of the RAA system (31-33). Interestingly, the activation of RAA is related with the aggravation of BPH such that angiotensin II peptide in the basal layer of prostate and angiotensin1 receptor on stroma of prostate were expressed, which suggests that angiotensin II may be ted with paracrine functions on hyperplasia of epithelial cells and hypertrophy of smooth muscle of prostate (34).

Funding: The present research was supported by the research fund of Dankook University in 2019.

Reporting Checklist: The authors have completed the SURGE reporting checklist. Available at http://dx.doi.org/10.21037/tau-19-808

Conflicts of Interest: All authors have completed the ICMJE uniform disclosure form (available at http://dx.doi.org/10.21037/tau-19-808). The authors have no conflicts of interest to declare.

Ethical Statement: The authors are accountable for all aspects of the work in ensuring that questions related to the accuracy or integrity of any part of the work are appropriately investigated and resolved. The procedures of this study were reviewed and approved by the Institutional Review Board of University Seoul Hospital with a waiver for informed consent (No. 2018-07-017). The KCHS data is openly accessible at the national public repository (http://chs.cdc.go.kr). There are no confidentiality risks to the participants of this study because the survey data were completely anonymized.