Renal cell carcinoma (RCC) is one of the most common urologic cancers with an estimated incidence of 4.4/100,000 worldwide (1). The standard treatment of localized disease is surgery with the option of a nephron sparing approach, depending on tumor size and localization (2). In larger tumors or when the localization of the tumor is unfavorable, radical nephrectomy is recommended. Even large tumors involving the vascular system can be surgically removed providing beneficial impact for tumor related prognosis. In metastatic disease, multiple pharmacological treatment options are available. Even in metastatic disease, nephrectomy and metastatectomy in selected cases can be performed in order to improve of cancer-specific survival (CSS) (3,4).

The extracellular domain of SDC1 can be shed resulting in a biological active ectodomain (15), which is able to trap the above-mentioned ligands acting as a competitive antagonist to the intact transmembrane protein, thus downregulating downstream receptor cascades (16).

Little is known about the role of SDC1 in RCC. Therefore, the aim of the present study was to assess the correlation of serum/tissue levels of SDC1 with clinicopathological parameters and follow-up data in RCC.

We present the following article in accordance with the REMARK reporting checklist (available at http://dx.doi.org/10.21037/tau-19-787).

This retrospective study included 413 patients who underwent rule-based surgical therapy for RCC between 1990 and 2005. Preoperative serum samples were available for 100 patients, while formalin-fixed paraffin embedded (FFPE) tissue samples were available for 343 patients. In 52 cases, both FFPE tissue and serum samples were available. The study was performed according to the Declaration of Helsinki and the institutional ethics committee approved the study protocol (14-5738-BO). The primary endpoint of this study was overall survival (OS) and the secondary endpoints were CSS and recurrence free survival (RFS). All patients were followed from baseline (date of surgery) until December 2016. Clinical and pathological data was obtained from patients’ medical reports.

Diagnosis was conducted in line with the WHO classification-scheme (24). FFPE tumor samples were available from 343 RCC patients. A tissue microarray (TMA) was constructed with three cores from each tumor sample after selection and labeling of the corresponding area on a hematoxylin & eosin slide.

Staining procedures for SDC1 were performed as described previously (25). Combined quantitative and qualitative evaluation of IHC results were performed by one pathologist blinded to clinical/follow-up data using a semiquantitative approach. Staining intensity was assessed as strong (3 points), moderate (2 points), weak (1 point) and no immunoreactivity (0 points) of all tumor cells.

Data are presented as medians ± SEM. Statistical significance was assigned at the level of P<0.05. Data lacking normal distribution were analyzed by the non-parametric two-tailed Wilcoxon rank sum test (Mann-Whitney) for paired group comparisons. Proportional distribution of the immunhistochemical results were analyzed using the Fisher’s exact test. OS, CSS and RFS analyses were done by uni- and multivariable Cox proportional hazard survival regression analyses and Kaplan-Meier survival analyses with log-rank (Mantel-Cox) test, using the IBM® SPSS® (version 24.0, Chicago, IL, USA) and GraphPad Prism® (version 6, La Jolla, CA, USA). As cut-off for serum expression, the median serum expression value was chosen. In the IHC results, strong and moderate signal was compared to weak and no signal. Perioperative variables with a P value of at least 0.05 in the univariable Cox-regression analyses were included in the multivariable models.

Beside membranous SDC1-reactivity in tumor cells, SDC1 (CD138) is typically positive in plasma cells and also in the plasma itself (Figure 1). 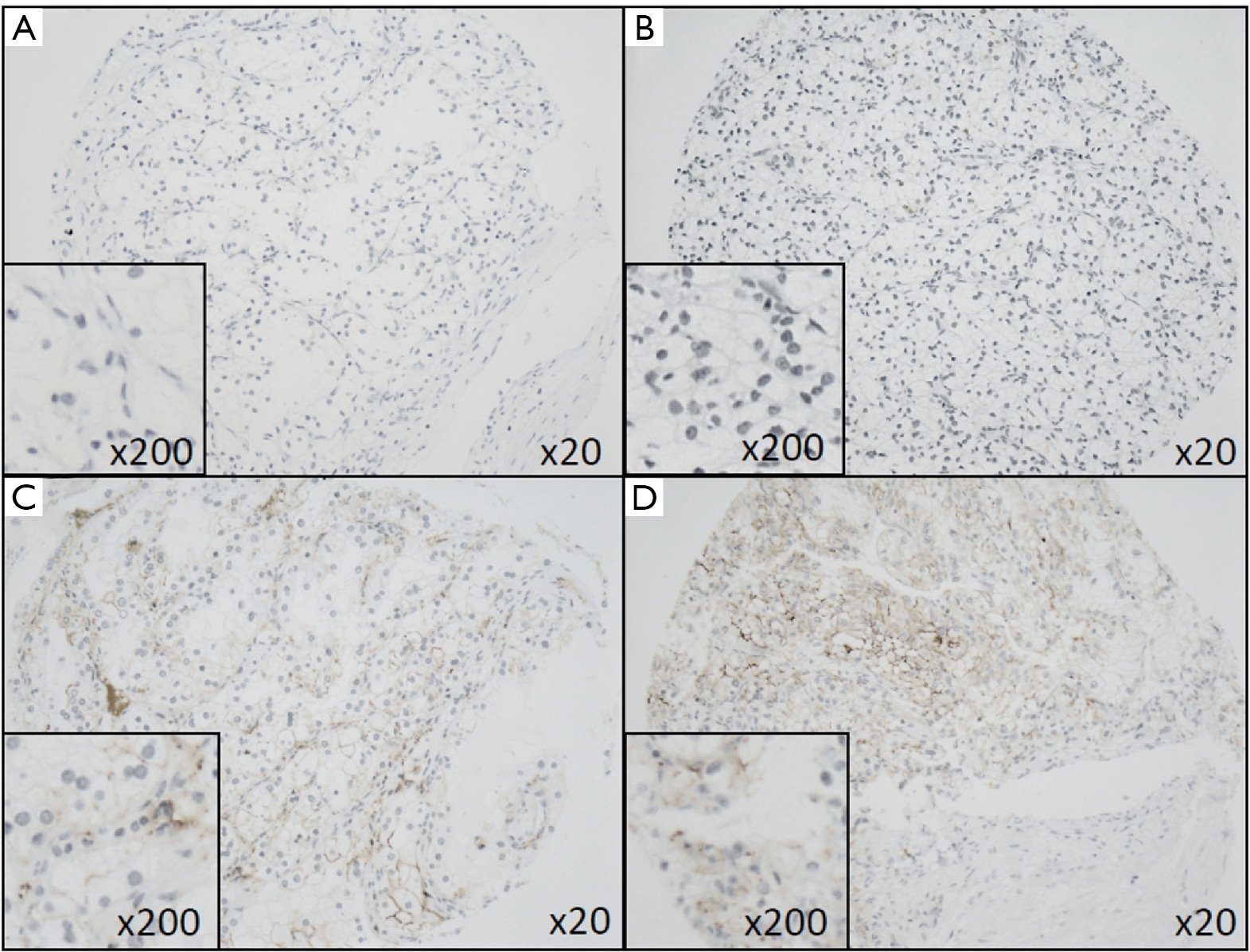 Figure 1 SDC1 (CD138) staining characteristics in RCC cases. In these cases with clear cell histology (original magnification 20×), no staining is detectable in (A) while in (B) a faint membranous SDC1-immunopositivity can be noted. In (C) a moderate and in (D) a focal strong SDC1-immunoreactivity can be seen. SDC1-reactivity can be identified in plasma cells and the plasma itself (C). RCC, renal cell carcinoma. 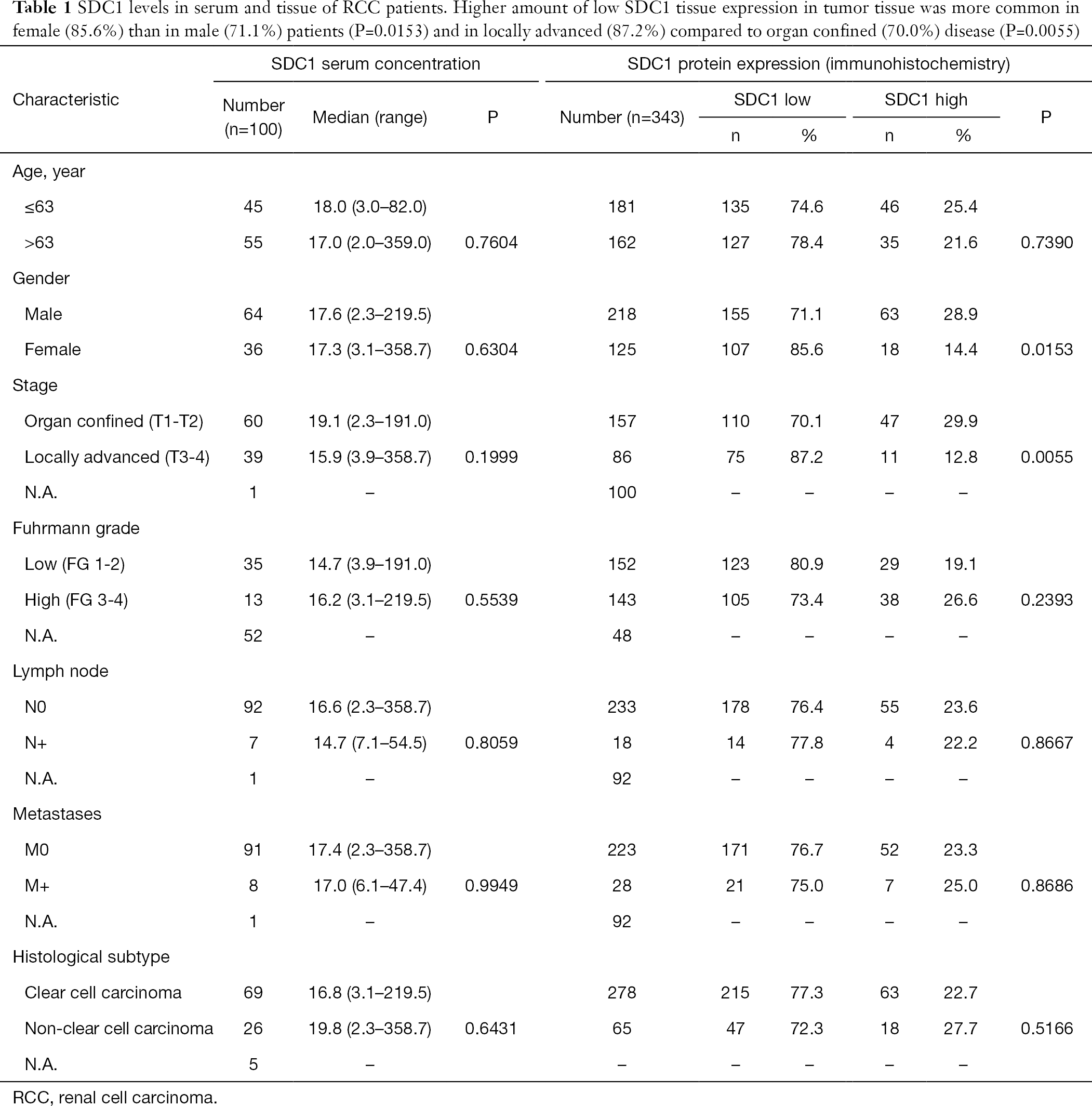 In case of 52 patients both, serum and tumor tissue samples were available. We found no correlation between sSDC1 serum levels and tissue immunoreactivity (P=0.7363). 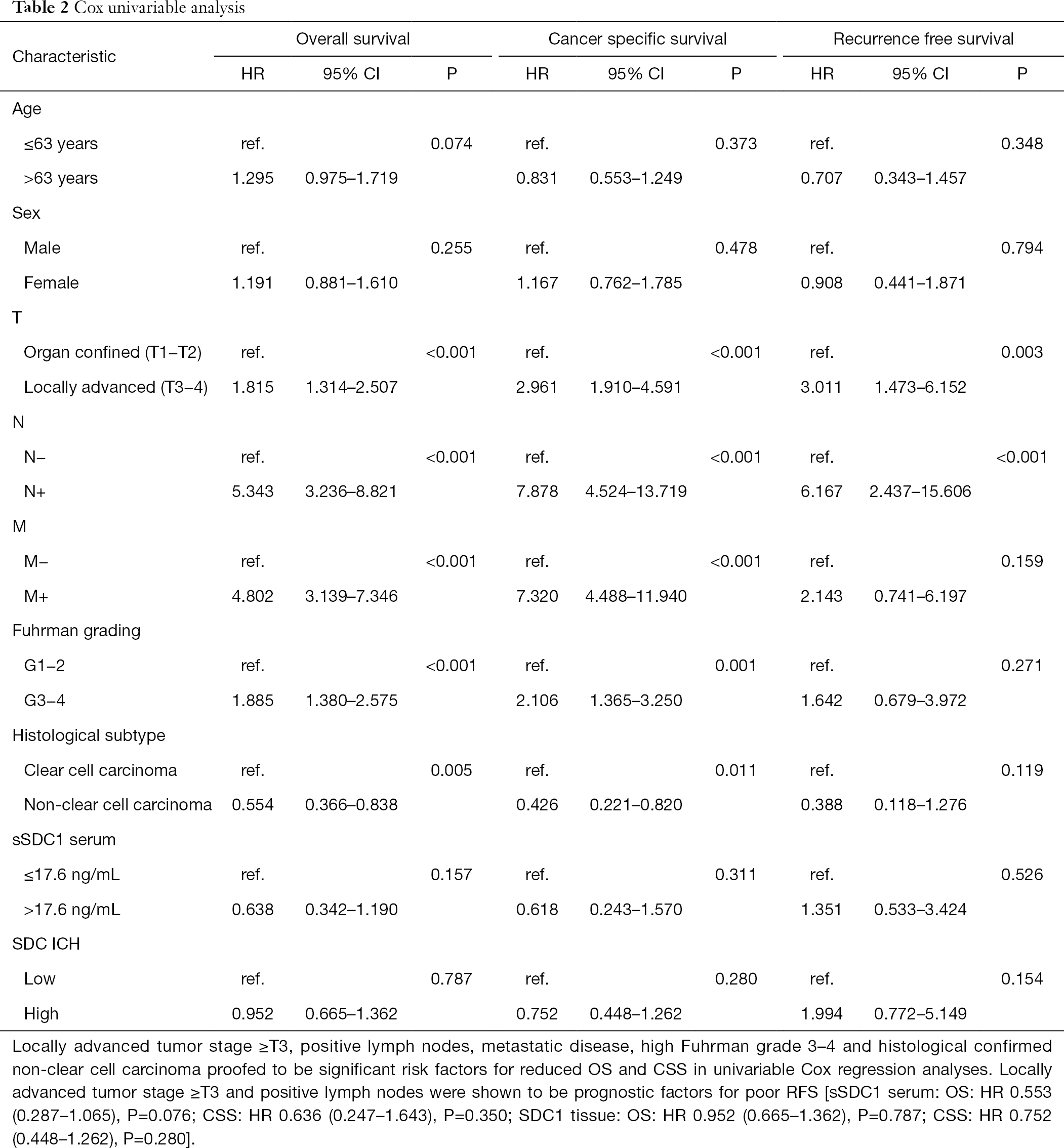 Dysregulation of SDC1 expression was frequently observed in various cancers. Both enhanced and decreased tissue expressions were found to be associated with clinicopathological parameters and patients’ prognosis in tissue-specific manner (17,18). For hematological tumors, SDC1 seems to have a significant clinical potential, as its enhanced serum levels were consistently shown to be associated with poor prognosis in chronic lymphocytic leukemia (26), large B-cell lymphoma (27), Hodgkin’s lymphoma (28) and multiple myeloma (29). Inconsistent results were shown for some solid tumors especially breast cancer, where dysregulation of SDC1 showed discrepant results. On the one hand elevated protein SDC1 expressions in immunhistochemical analyses showed reduced OS and CSS with reduced cancer related prognosis in advanced breast cancer (30-32). Other studies in contrast could not confirm this observation and showed no impact of SDC1 expression levels in ductal carcinoma of the breast (33) or adverse results with elevated numbers of high grade malignancies and reduced cancer related prognosis in invasive ductal breast cancer patients (34). A meta-analysis of ten studies with 888 colorectal carcinoma patients found decreased SDC1 expression levels in tumor compared to normal tissue as well as in low grade and low stage compared to high grade and high stage disease. However, pooled data analyses revealed no impact for SDC1 on patients’ survival (35).

SDC1 (also known as CD138) tissue expression is a well known marker for plasma cells in IHC. In a study with 50 RCC specimens (40 clear cell, 6 papillary and 4 chromophobe) SDC1 protein staining showed membranous immunoreactivity for clear-cell and chromophobe RCC whereas immunoreactivity was located at the basal cytoplasm in papillary RCC. Decreased SDC1 protein expression was associated with increasing nuclear grade. Correlations between SDC1 and tumor stage or histological subtypes could not be identified (39). In addition, our data on a larger number of RCC tumor samples showed a higher proportion of tumors with low SDC1 immunoreactivity in advanced stages of RCC. Interestingly, low SDC1 protein tissue expression was more often found in females compared to male patients.

None of the formerly published studies assessed the correlation between SDC1 and patients’ prognosis in RCC. Thus, to best of our knowledge, the present study is the first to assess this topic. Our data suggest that SDC1 tissue expression has no impact on OS, CSS or RFS in RCC. Similarly, analyzing the soluble SDC1 levels in preoperative serum samples of RCC patients for the first time, we found no correlation between SDC1 concentration and clinicopathological parameters or patients’ outcome. In our study, multivariable Cox survival analyses confirmed that clinical parameters including tumor stage, presence of lymph node or distant metastases as well as histopathological features such as histological subtype and Fuhrman nuclear grade are independent prognostic factors for RCC.

The present study has some potential limitations. First, the retrospective character of the study limits its informative value as all data of retrospective investigations should be interpreted critically. Further, a semiquantitative immunohistochemical approach is associated with increased susceptibility of systemic bias as the choice of antibody, staining method and subjective nature of the evaluator can influence the results.

Reporting Checklist: The authors have completed the REMARK reporting checklist. Available at http://dx.doi.org/10.21037/tau-19-787

Ethical Statement: The authors are accountable for all aspects of the work in ensuring that questions related to the accuracy or integrity of any part of the work are appropriately investigated and resolved. Written informed consent was obtained from the patients for publication of this Original Article. The principles of the Helsinki Declaration were followed during the study. Patients were treated according to the Treatment Guidelines of the European Association of Urology and approved by an interdisciplinary tumor board. The Committee for Research of the Faculty of Medicine, University Hospital Essen, University Duisburg-Essen approved the study protocol (ID 14-5738-BO). Confidentiality of the patients’ data was guaranteed and all data was anonymized. Future management of the patients is not affected by the present study.