Renal cell carcinoma (RCC) is one of the most common malignant tumors of the urinary system, and it is the 6th most common cancer in men and the 10th in women. RCC accounts for 5% of all tumors in men and 3% of all tumors in women (1). Although most patients are diagnosed at early stages, a considerable proportion of renal cancer is only diagnosed in the local advanced stage, and 17% of patients have distant metastasis at the time of diagnosis (2). In recent years, due to the great progress of anti-angiogenic drugs and immunotherapy (3,4), many patients with advanced renal cancer have achieved good therapeutic effect, which has changed the natural course of renal cancer. Therefore, urologists urgently need a simple, effective, accurate clinical biomarker to screen out patients with poor prognosis and identify patients with a high risk of recurrence and poor prognosis as early as possible. Identifying such a biomarker can also provide accurate clinical decision-making and active follow-up monitoring.

Fibrinogen is a kind of glycoprotein that is mainly produced in the liver and secreted into the serum. A number of recent epidemiological studies have shown that fibrinogen not only participates in coagulation but also plays a role in the occurrence and development of tumors. Previous studies have shown that an increase in preoperative fibrinogen is associated with the progression and poor prognosis of malignant tumors (5,6). In addition, hypoproteinemia has been found to be associated with poor prognosis in a variety of cancers, including lung cancer, gastric cancer, and colon cancer (7-9). The fibrinogen-albumin ratio (FAR), as well as fibrinogen and albumin as single factors, are related to poor prognosis in esophageal cancer, liver cancer, and other tumors (10,11). Therefore, we assume that the FAR has potential value in evaluating the prognosis of patients with nonmetastatic renal cancer. The purpose of this study was to evaluate the prognostic value of the preoperative FAR in patients with renal cancer after resection and to compare it with established systemic inflammatory immune biomarkers, including the neutrophil-lymphocyte ratio (NLR), prognostic nutrition index (PNI), and controlling nutritional status (CONUT) score.

We present the following article in accordance with the STROBE reporting checklist (available at http://dx.doi.org/10.21037/tau-19-873).

From 2010 to 2012, 279 patients with renal cancer who underwent radical nephrectomy or partial nephrectomy were collected from the Urology Department of Peking University First Hospital. All cases were confirmed by postoperative pathology. All patients had no history of other types of malignant tumor, no lymph node metastasis or distant metastasis, no thrombotic disease, and no history of anticoagulation treatment. The clinicopathological data were obtained from the patient’s electronic medical record, and the pathological and clinical data of all cases were complete. During the follow-up of this study, the patients or their relatives were informed about the content of this study in detail and got their oral consent. The study was approved by the central ethics committee of our hospital.

The end point of this study was overall survival (OS). OS was defined as the time from the operation to death from any cause.

SPSS 24.0 software was used to analyze the data. The best cutoff value for the FAR was calculated by receiver operating characteristic (ROC) curve analysis. Patients were divided into two groups based on the best cutoff value (high-FAR and low-FAR), and the clinical and pathological characteristics between the two groups were compared, including age, gender, hypertension, diabetes, Fuhrman grade, tumor classification, pathological T stage, histological subtype, and operation method. χ2 test was used for the comparison of count data. The Kaplan-Meier method was used to calculate the survival rate and draw survival curves. The log-rank test was used to compare survival differences between groups. Cox hazards regression model was used to analyze the prognostic factors and determine the independent predictors of OS. A bilateral P<0.05 was considered statistically significant.

Determination of the optimal cutoff value of the FAR 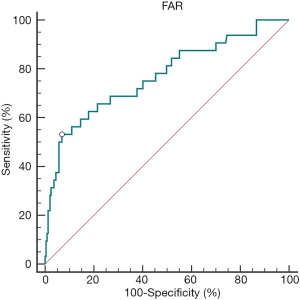 The relationship between the preoperative FAR and clinicopathological factors of RCC

Of the 279 patients included in the study, 195 were men and 84 were women. The median follow-up time was 65 months (range, 2–75 months). Table 1 summarizes the detailed baseline characteristics of the selected patients. According to the best cutoff value of the FAR as determined by ROC curve analysis, the patients were divided into two groups. There were 35 patients in the high-FAR (>0.116) group and 244 patients in the low-FAR (≤0.116) group. A FAR >0.116 was significantly correlated with high Fuhrman grade (P<0.0001) and late pathological T stage (P<0.0001) (Table 1). There was no significant correlation between FAR and age, gender, diabetes, hypertension, tumor histology, or operation method. 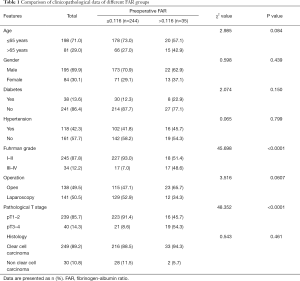 The relationship between clinicopathological features and prognosis of RCC 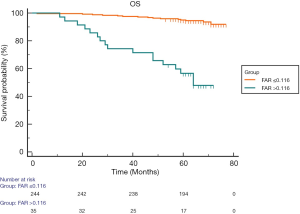 Figure 2 Kaplan-Meier survival curves for RCC patients. The OS of patients with a FAR >0.116 was significantly shorter than that of those with a FAR ≤0.116 (P<0.0001, log-rank test). RCC, renal cell carcinoma; OS, overall survival; FAR, fibrinogen-albumin ratio.

Comparison of the AUCs for the FAR, NLR, PNI, and CONUT score 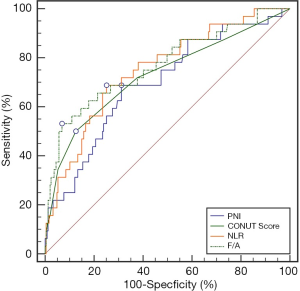 Table 3 Comparison of the areas under the curves for the FAR, NLR, PNI, and CONUT score
Full table

Prognostic significance of the FAR based on Fuhrman grade

The FAR reflects the ratio of fibrinogen to albumin, and it has been shown to have good prognostic value in esophageal cancer (10) and hepatocellular carcinoma (HCC) (11). Inspired by this, we explored the prognostic value of the FAR after radical nephrectomy. To our knowledge, this is the first study to focus on the impact of the FAR on the prognosis of RCC.

In this study, we explored the FAR as a predictor of renal cancer prognosis. We divided the patients into two groups based on the best cutoff value for the FAR as determined by ROC curve analysis. There were 35 patients in the high-FAR (>0.116) group and 244 patients in the low-FAR (≤0.116) group. A high FAR was significantly correlated with high tumor grade (P<0.0001) and late pathological T stage (P<0.0001) (Table 1). In addition, multivariate Cox regression analysis showed that Fuhrman grade and the FAR were independent prognostic factors of OS. Both fibrinogen and albumin are routinely measured in the clinic. Therefore, using the FAR to assess prognosis would be cheap, convenient, and repeatable.

The nuclear grade, pathological stage, and pathological type of tumor have commonly been used as indexes to evaluate the prognosis of patients with RCC (14). However, these indexes are obtained by postoperative pathology, and more accurately identifying patients with poor prognosis before operation and carrying out tumor risk stratification is vital to determine treatment plans and guide postoperative follow-up. Therefore, finding biomarkers that can accurately predict tumor prognosis is of great interest. As early as the 19th century, Professor Rudolf Virchow first showed that there might be a connection between inflammation and cancer by observing the leukocytes in tumors. It is now generally believed that inflammation affects every step of tumor development, from tumorigenesis to metastasis (15).

Fibrinogen is not only an important factor to maintain normal coagulation function but also an acute phase reactive protein that can reflect the systemic inflammatory response. The systemic inflammatory response and coagulation are closely related to tumor development (16). Many recent studies have shown that preoperative peripheral blood fibrinogen levels are related to survival in a variety of malignant tumors. Further, higher plasma fibrinogen levels are related to poor pathological characteristics and can predict survival in lung cancer, breast cancer, ovarian cancer, colon cancer, prostate cancer, and other tumors (17-21). This may be related to the direct involvement of fibrinogen in the interaction between vascular endothelial growth factor, transforming growth factor-β, platelet-derived growth factor, and fibroblast growth factor to regulate angiogenesis. Fibrinogen also plays a key role in cell proliferation, angiogenesis, and hematogenous metastasis of tumor cells (22-24).

At present, serum albumin levels are the most direct laboratory index to evaluate the nutritional status of patients. Studies have shown that the inflammatory response and tumor state also affect serum albumin concentration. Low albumin levels may weaken the immune system, increase the chance of infection, and further accelerate the development of malignant tumors (25). Albumin has been reported to be of prognostic value in a variety of human malignant tumors: the lower the serum albumin level, the worse the prognosis of cancer patients, including in head and neck cancer (26), non-small cell lung cancer (27), ovarian cancer (28), and adenocarcinoma of the gastric cardia (29). In addition, serum albumin is one of the components of the Child-Pugh classification system reflecting liver function. Studies have shown that hypoproteinemia is an independent prognostic factor for poor prognosis in patients with liver cancer (30).

Other preoperative blood indexes based on inflammation and nutritional metabolism, such as the NLR, PNI, and CONUT score, have recently been reported as useful prognostic indexes of renal cancer (12,13,31,32). We compared the FAR to these common indexes in predicting the 5-year OS after surgery and found that the FAR had the same or better accuracy in predicting the 5-year OS.

Other predictive biomarkers, such as Glasgow predictive score (GPS), platform to lymphocyte ratio (PLR), C-reactive protein to albumin ratio, in different studies, the results have a certain predictive effect on the prognosis of renal cancer (33-35). In this study, we found that FAR is a new and simple prognostic factor for renal cancer patients after surgery. However, there are some unavoidable limitations in this study. First, this is a single-center retrospective study. The results may be affected by selection bias. Whether our findings are applicable to other centers needs to be verified. Second, many other factors affect the FAR, such as acute and chronic infection and chronic liver disease; this may affect the accuracy of prognosis prediction based on this ratio. In addition, because the study population collected in this study was relatively early, many patients received different treatment measures due to tumor recurrence during follow-up, which affected OS.

In conclusion, despite these limitations, our study is the first to prove that the preoperative FAR is a new and simple prognostic factor for renal cancer patients after surgery, especially for patients with low Fuhrman grade. It is a simple and sensitive method to evaluate the prognosis of renal cancer patients that does not increase the economic burden or physical pain of patients and a promising biomarker.

Funding: This work was supported by the National Natural Science Foundation of China (Grant No. 81572510 and 81872088 to QZ) and the Scientific Research Seed Fund of Peking University First Hospital (Grant No. 2018SF026 to YG).

Reporting Checklist: The authors have completed the STROBE reporting checklist. Available at http://dx.doi.org/10.21037/tau-19-873

Conflicts of Interest: All authors have completed the ICMJE uniform disclosure form (available at http://dx.doi.org/10.21037/tau-19-873). QZ serves as an unpaid editorial board member of Translational Andrology and Urology from May 2019 to Apr 2021. The other authors have no conflicts of interest to declare.

Ethical Statement: The authors are accountable for all aspects of the work in ensuring that questions related to the accuracy or integrity of any part of the work are appropriately investigated and resolved. The study was approved by the Central Ethics Committee of our hospital (No. 2018-386).