Current evidence suggests that the effect of urinary bladder cancer (UBC) related single nucleotide polymorphisms (SNPs) may depend on smoking exposure (1-4). However, it remains unknown if gene-environment interactions (GxE) can be differential across UBC subtypes and characteristics.

To date, studies on gene-tobacco interactions (GxT) for UBC have only considered the overall risk of UBC as an outcome. These investigations have resulted in overlapping findings, collectively reporting multiple significant loci (2-4). Some of the most commonly reported genes (NAT2, UGT1A6) are regulatory of phase II detoxification, a pathway for metabolizing tobacco-related carcinogens (i.e., aromatic amines) (2,3,5). As polymorphisms in NAT2 and UGT1A6 alter smoking-related carcinogen clearance, their effect naturally becomes limited to smokers. Concurrently, the effect is reduced (2) or almost absent for never smokers (5). Importantly, the level of smoking exposure has shown to be an important aspect in GxT, revealing an important pattern of certain genotypes interacting with smoking in a dose-dependent manner (2,4-7). Some genotypes, namely GSTM1-null status (3), appear more important for non-smokers, although significant effects are present regardless of tobacco use. Expectedly, the effect of these genotypes on UBC risk does not vary within smoking intensity categories (6).

UBC is one of few cancers with an established GxE (4), yet previous research has not distinguished between muscle invasive bladder cancer (MIBC) and non-muscle invasive bladder cancer (NMIBC) groupings. Given our continually-evolving knowledge of the pathogenesis of MIBC and NMIBC (8), not stratifying for these categories in genetic analyses could result in overlooking important biological mechanisms. Furthermore, it is now known that genetic loci for UBC risk are not relevant for UBC prognosis (9), which continues to highlight the complexity of genetic associations. Finally, little evidence is present for genetic associations with specific characteristics such as tumor size, grade, stage or patient age (2,5). However, these characteristics are especially influential for NMIBC outcomes (10), and are more specific entities than the more broadly-defined prognostic outcomes such as recurrence or progression.

We have previously carried out a genome-wide association study (GWAS) on NMIBC tumor and patient characteristics in the Bladder Cancer Prognosis Programme (BCPP) cohort, potentially identifying novel genetic associations (11). In the current study, we have investigated if smoking status and/or smoking intensity interact with the effect of discovered variants on key NMIBC characteristics of tumor grade, stage, size and patient age within the BCPP cohort.

BCPP is a prospective cohort of 1,544 participants (12). Baseline clinical tumor characteristics (stage, grade, size) were collected from medical records, while demographic and smoking data were retrieved from records of semi-structured interviews conducted at baseline. Largest tumor size was estimated visually during cystoscopy. Blood samples of 888 participants were genotyped on the Illumina Infinium OmniExpress-24 BeadChip array (previously known as The HumanOmniExxpress-24 BeadChip) at deCODE genetics (Reykjavik, Iceland) (13).

QC for the initial GWAS was carried out in PLINK v1.90 (released 17th November 2016) (14,15) and is described in more detail elsewhere (11). In brief, genotype samples yielding inconclusive sex calls, excessive missingness, low or increased heterozygosity rate were excluded from the analysis. Related individuals and participants presenting as population outliers [identified in the principal component analysis (PCA)] were additionally excluded from the study. Genetic markers deviating from the Hardy-Weinberg equilibrium (HWE), those with high missingness rate and low minor allele frequency (MAF) were excluded. All QC steps resulted in a pre-imputed dataset consisting of 653 individuals and 597,764 SNPs.

A two-step imputation was performed with Eagle v2.3.2 (16) for haplotype phasing and IMPUTE2 (17) for genotype imputation, using 1000 Genomes Phase 3 (released 2nd May 2013) (18) as a reference panel in the genome build 19 (GRCh37/hg19). Post-imputation QC consisted of deleting markers having info score of <0.3 and MAFs of <1%, resulting in a dataset containing 11,914,228 markers that were used for GWAS analysis with tumor and patient baseline characteristics. The exact thresholds applied and number of exclusions per step are outlined in detail in Figure 1. 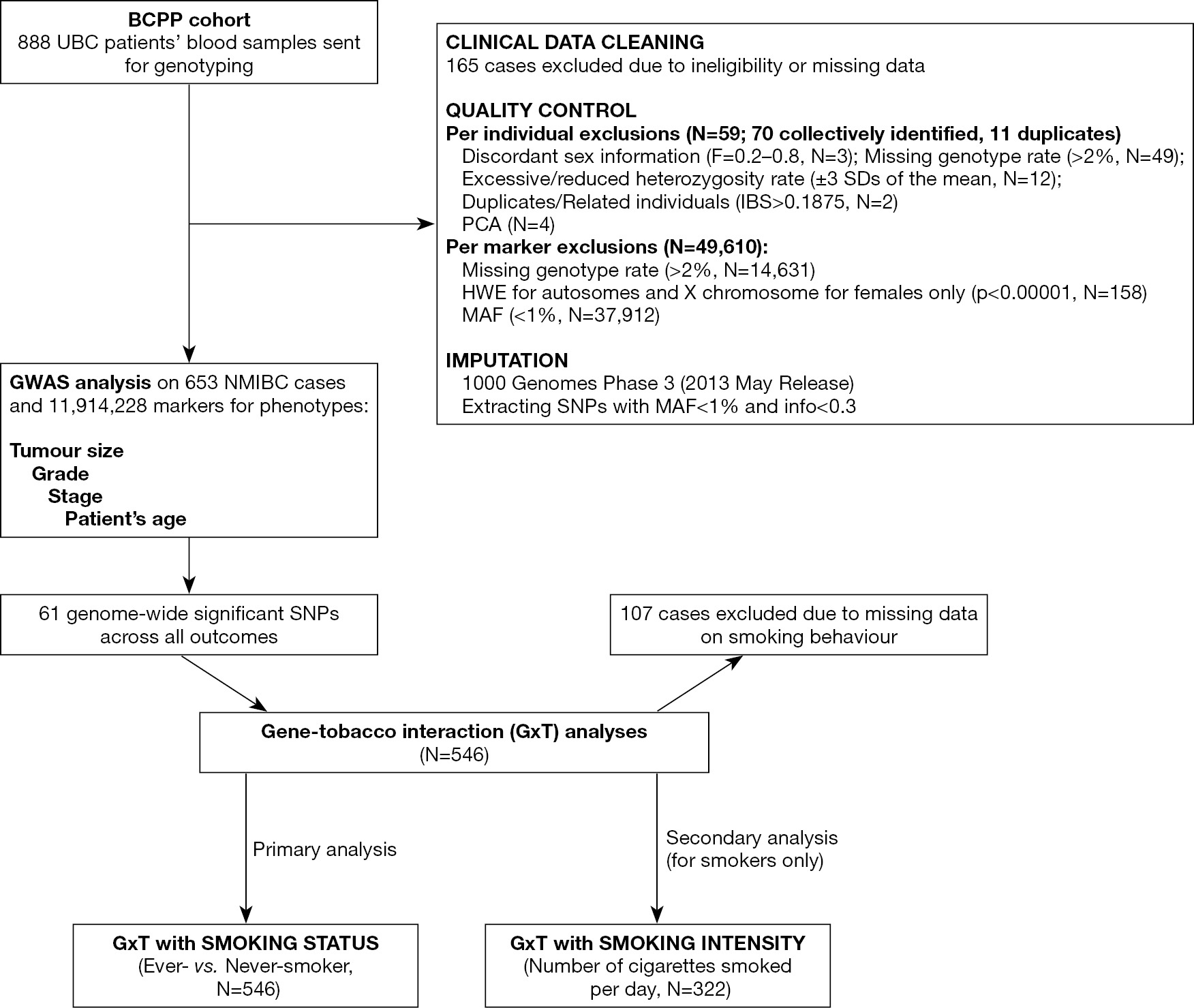 As studies on genetic associations with NMIBC baseline characteristics are scarce, we have used results of a previously-reported GWAS in the BCPP cohort (11). Hence, a total of 61 discovered variants were used to test for GxT. The outcomes were as follows: tumor size (centimeters), stage (T1 vs. Ta/Tis), grade (G3/G2 vs. G1), and patients’ age [years as a continuous outcome and a binary variable with sample mean as a cut-off value (</≥69.9 years, representing sample mean age)]. Our analyses were restricted to NMIBC cases only (corresponding to recorded stage at the time of diagnosis of Ta, T1, or Tis) who also had valid records on tobacco use, resulting in 546 patients.

Smoking exposure was modelled as two variables: smoking status (ever vs. never smokers) and smoking intensity (number of cigarettes smoked daily for smokers only). GxT with smoking status was considered as a primary analysis (including 546 subjects), while analysis on smoking intensity was considered secondary (consisting of 322 smokers with valid data on number of cigarettes smoked per day).

To test the interaction terms that account for the uncertainty of imputed genotypes, QUICKTEST software was used (19). All analyses were adjusted for gender and first five genetic principal components to increase estimate precision.

A total set of 61 SNPs that were discovered in the previous GWAS analysis of the BCPP cohort (11), were tested. GxT term (depicted as SNP × smoking or SNP × smoking intensity) was modelled for each discovered association. An interaction term was deemed to be significant if P value <0.05.

All identified significant SNPs were annotated to an overlapping or closest gene using a web-based SNPnexus tool (20,21), with Ensembl (22) (version 74) as a functional annotation system. Gene-Tissue Expression (GTEx) database (23) was queried for all significant SNPs to identify expression quantitative loci (eQTL).

BCPP patient characteristics are presented in Table 1. Out of the total sample of 546 participants, 72 were never-smokers, whilst 474 had a history of tobacco use. Participant gender was predominantly male (chi-square statistic =9.97, P=0.002). No other statistically significant differences in baseline characteristics between smokers and never-smokers were observed. 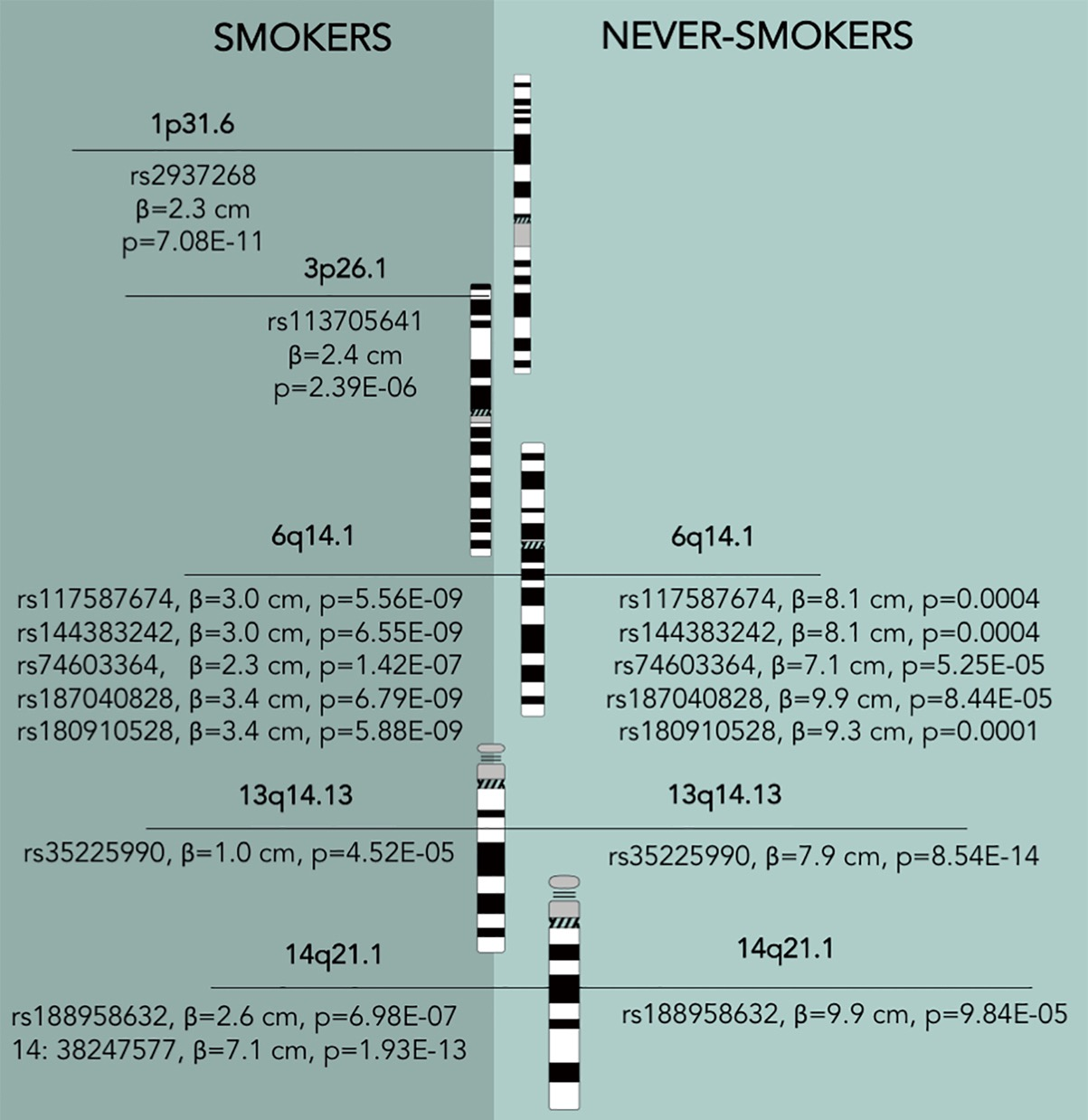 Five variants on 6q14.1 were statistically significantly associated with NMIBC tumor size among both strata of smoking behavior; however, β estimates for never-smokers were universally higher, more than doubling the effect sizes for ever-smokers (Table 2, Figure 2). All five SNPs (rs180910528, rs74603364, rs187040828, rs144383242, and rs117587674) have mapped to intergenic regions (Table 3). Interestingly, two of these SNPs (rs144383242 and rs117587674) are recorded in the GTEx database as having an effect on the expression of HMGN3-AS1 in the tibial nerve tissue (Figures S1,S2, available online) (23). None of the 6q14.1-located SNPs have shown significant interaction between tumor size and smoking intensity in our sample. 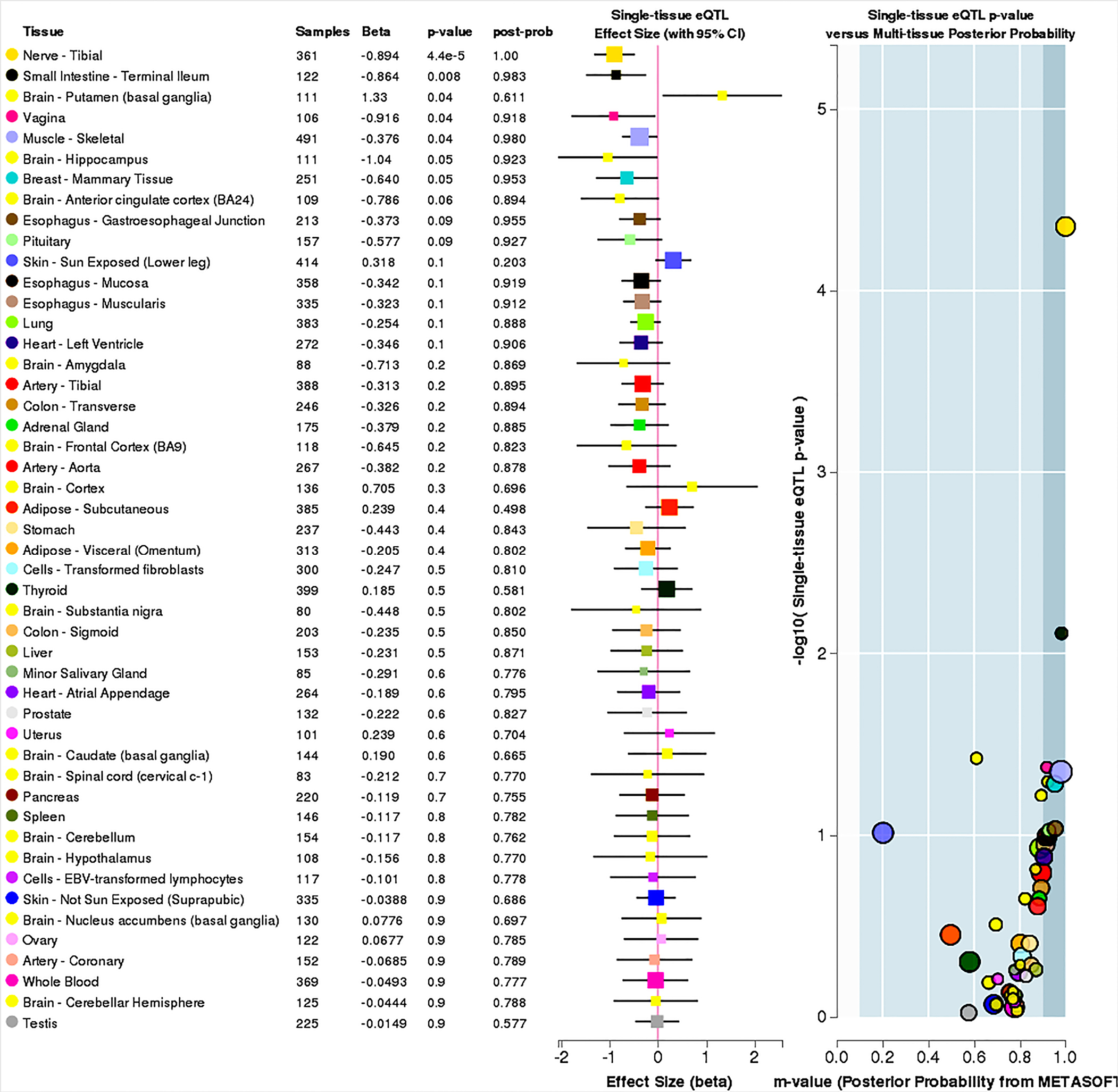 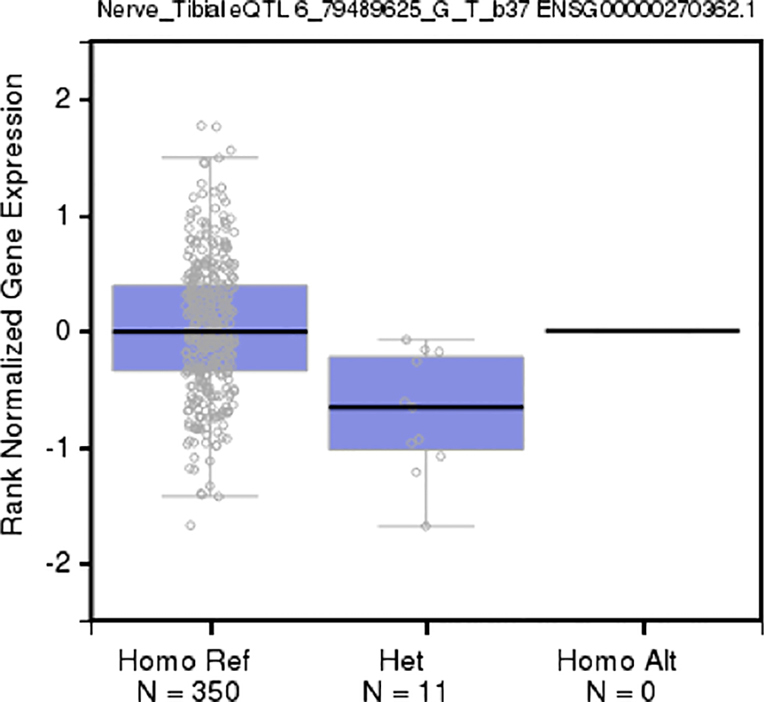 Rs113705641 maps to a long non-coding RNA molecule, and reports on its function are lacking, therefore we are unable to postulate on a potential biological mechanism of interaction.

On the other hand, phosphodiesterase 4B (PDE4B) enzymes are well described to regulate cyclic adenosine 3’,5’-monophosphate (cAMP) concentration in cells by breakdown to non-active molecules (25). The PDE4 family is cAMP-specific, and four existing isoforms of PDE4B account for most cAMP-degradation in a cell (25).

In our analysis, cAMP seems to be the overlapping component between PDE4B and smoking, which results in a counter-effect of cAMP regulation (i.e., overexpressed PDE4B decreases cAMP, while smoking increases cAMP). Thus, we hypothesize that smoking interacts with PDE4B mutation status and results in a smaller tumor size increase than the PDE4B mutation itself. This pattern would explain the difference between a main effect exhibited by the SNP in PDE4B (resulting in 2.6 cm increase in tumor size) and a surprising reduced estimate of a joint effect of the SNP and smoking exposure (2.1 cm increase in tumor size).

Smoking, when considered as an independent factor, is the main external risk factor for developing UBC (42). Our described interaction is conditional on the overexpression of PDE4B enzyme; thus, it should be viewed not as a case for the benefits of smoking, but one describing a potential cAMP-related pathway of bladder cancer pathogenesis.

In contrast, variants on 13q14.13 and 6q14.1 have reached significant values for main effects among all participants. However, the clinical importance might be higher for never smokers as they showed substantially higher effect sizes than for smokers. The mapped FAM194B (ERICH6B) gene (13q14.13) is recorded in the GTEx database as excessively expressed in testis tissue (23), but other reports on gene function or phenotype associations are scarce, thus precluding a discussion on its potential biological pathway. SNPs in 6q14.1 were mapped to intergenic regions, with rs180910528 and rs187040828 located between protein coding genes of PHIP and HMGN3. Interestingly, four of the total five SNPs in 6q14 region (rs180910528, rs187040828, rs144383242, and rs117587674) are recorded in the GTEx database as having a cis-regulatory effect on an RNA gene of HMGN3-AS1 (23). Antisense RNAs bind to messenger RNA molecules, preventing them from being translated into protein (43). Thus, lower expression of HMGN3-AS1 may cause higher levels of proteins coded by HMGN3 gene. HMGN is a family of nucleosome-binding proteins that alter chromatin structure and regulate essential cell functions, such as differentiation and development (44).

Our study has several limitations. Current analysis was carried out on a relatively small sample of individuals, and false-positives are naturally not to be excluded. The associations between genetic variation and NMIBC tumor size should be interpreted with caution, as they lack validation (11). Besides tobacco, other variables, such as occupational-related exposures with aromatic amines might have independent GxE effects and were not adjusted for in our analyses (45). Larger samples with detailed clinical data are a next step to exploring and validating reported GxEs with smoking for NMIBC. Until robust evidence exists for including genetic variance into NMIBC prognostication tools, our study is complementary to other proof-of-principle reports (2).

In summary, our study suggests smoking might alter the outcome between genetic variance and NMIBC tumor characteristics. These results may provide more evidence on the complexity of the joint influence of genetic background and external exposures on bladder cancer.

Conflicts of Interest: All authors have completed the ICMJE uniform disclosure form (available at http://dx.doi.org/10.21037/tau-19-523). RTB has contributed to advisory boards for Olympus Medical Systems and Janssen. The other authors have no conflicts of interest to declare.

Ethical Statement: The authors are accountable for all aspects of the work in ensuring that questions related to the accuracy or integrity of any part of the work are appropriately investigated and resolved. All procedures performed in studies involving human participants were in accordance with the ethical standards of the institutional and/or national research committee and with the 1964 Helsinki declaration and its later amendments or comparable ethical standards. Informed consent was obtained from all individual participants included in the study.