Editorial comment: the effect of neoadjuvant chemotherapy on tumour downstaging and outcomes in patients with muscle invasive bladder cancers

Urothelial carcinoma of the bladder (also known as transitional cell carcinoma of the bladder) is the second most common malignancy of the mal genital tract in the word. It is the 10th most common cancer. Based on the data of GLOBOCAN 2018, the estimated new cases were 549,000 and the estimated deaths was 200,000. Bladder cancer is more common in men than in women with the male/female ration of 4. The incidences were 9.6/100,000 and 3.2/100,000 in men and women respectively (1). It is the ninth most common cancer in Morocco according to Casablanca published in 2016. Tobacco is the strongest risk factor of bladder cancer worldwide and Schistosoma haematobium is the most common etiology in Egypt (2).

Radical surgery involving cystoprostatectomy in men and pelvectomy (cystectomy plus hysterectomy) in women, plus pelvic lymph node dissection, is the standard of care of muscle invasive bladder cancer (MIBC). However, in the last two decades, neoadjuvant chemotherapy (NAC) has been widely investigated in the management of patient with clinical stages T2-T4a MIBC (3). In fact, two randomize trial and one meta-analysis confirmed the positive impact of neoadjuvant cisplatin combination before radical cystectomy (RC) in MIBC. The Southwest Oncology Group (US intergroup) trial randomly assigned 317 patients to radical cystectomy (RC) versus 3 cycles of MVAC chemotherapy followed by RC (4). NAC significantly improved outcomes of patients MIBC. Pathologic complete response rate (pCR) in MVAC group was 38% vs. 15% (P=0.001). Median overall survival (OS) was 77 vs. 46 months (P=0.06), in favor of NAC. In both groups (NAC and no NAC), improved survival was correlated with the occurrence of complete downstaging (CD), defined as the absence of residual disease (ypT0N0) in the cystectomy specimen. Five-year OS rate for patient with CD was 85%. In fact, pCR is currently considered as a powerful surrogate marker of response to NAC. The largest neoadjuvant trial was conducted by the EORTC intergroup and enrolled 976 patients with stages T2/T3 and T4 bladder cancers. Patients were randomized to either radical treatment (surgery or radiotherapy) or NAC followed by radical treatment. Median OS and 3-year OS were 44 months and 56% in the NAC group, as compared to 37.5 months and 50%, respectively in the radical treatment group (5). In a meta-analysis involving more than 3,000 patients from 11 randomized trials, cisplatin neoadjuvant chemotherapy was associated with a positive absolute overall survival benefit of 5% at 5-year (6).

More recently, several chemotherapy regimens have been investigated in neoadjuvant setting. Dose dense MVAC (dd-MVAC) was investigated in a large transverse comparative study (n=1,113). Patients who received neoadjuvant dd-MVAC showed a significantly higher rate of pathologic complete downstaging (called ypT0N0 or pCD) (41.3% vs. 24.6%) and longer OS as compared to those treated with neoadjuvant gemcitabine plus cisplatin. In addition, there is a surrogate association of pCD disease status with OS (7). Neoadjuvant dose dense gemcitabine (2,500 mg/m2 on day 1) plus cisplatin (cisplatin 35 mg/m2 on days 1 and 2) (ddGC) delivered every 2 weeks for 6 cycles was investigated in a recent phase II trial conducted by the MSKCC group and showed pCR rate of 15% (8). The most common toxicities with ddGC were anemia (12%; grade 3) and hyperglycemia (12%; grades 3 and 4).

In their article entitled “Tumor Downstaging as an Intermediate Endpoint to Assess the Activity of Neoadjuvant Systemic Therapy in Patients with Muscle-Invasive Bladder Cancer”, published in Cancer, Martini and colleagues from Tisch Cancer Institute evaluated the impact of NAC on tumor downstaging and outcomes in patients with MIBC (9). Overall, 189 and 2,010 patients were analyzed from tow cohorts, the Retrospective International Study of Cancers of the Urothelial Tract (RISC) and the National Cancer Database (NCDB) cohorts, respectively. Tumor downstaging was defined as pathologic stage (TNM) less than clinical stage. To analyze the impact of pDS (excluding pCR), the authors examined 3 subgroups: patients with no response to NAC, patients with pDS excluding pCR, and patients with pCR. Results showed that NAC is significantly associated with a significant increase in the rate of pDS as compared to cystectomy alone. In NAC group, pDS was achieved by 33% and 35% of the cases in RISC and NCDB, respectively. pCR was achieved by 20% and 15% of the cases in RISC and NCDB, respectively. In addition, pDS and pCR are associated with improved OS: 5-year OS was 73% for patients achieving pDS and was 93% for those achieving pCR. Finally, good response to NAC (pDS excluding pCR or pCR) was associated with higher OS as compared to the absence of response to NAC.

The authors should be congratulated for this interesting work using a large dataset evaluating the effect of NAC on tumor downstaging and outcome in patient with MIBC. Their study further illustrates the significant impact of NAC in the management of MIBC and they demonstrate that pDS excluding pCR is associated with improved OS (9).

However, the study presents several limitations which warrant discussion:

Only a few studies have investigated the effect of NAC on tumour downstaging (downstaging excluding pCR) and outcomes and the value of pDS as marker of response to NAC in patients with stage T2-T4N0M0 MIBC (Table 1). 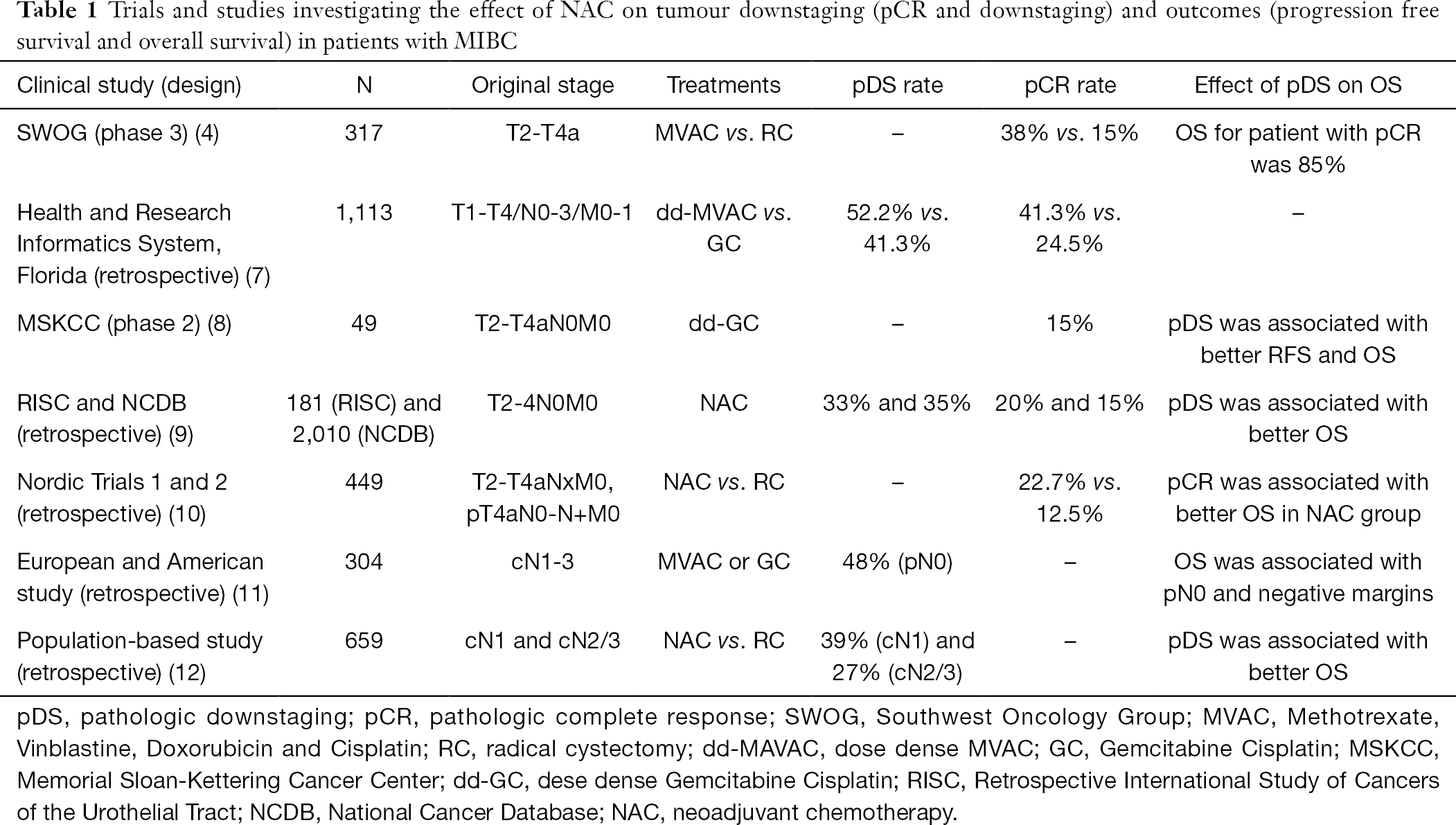 The MSKCC phase II trial enrolled 49 patients with clinical stage T2 to T4aN0M0 disease to investigate the effect of induction ddGC chemotherapy on tumor downstaging (< pT2) and outcomes. The primary end point of the study was met, the pathologic response rate and pT0 rates were 57% and 15%, respectively. For patients who underwent RC, responders to chemotherapy (< pT2N0) had significantly better RFS compared with non-responders (≥ pT2N0 disease) (P=0.004). The 2-year RFS and OS rates in responders and nonresponders were 96–96%, and 52–84%, respectively (P=0.043) (8).

The effect of NAC on tumour downstaging was also explored in patients with node positive disease. Zargar-Shoshtar et al. reported a pCR and pDS rates of 14.5 and 27%, respectively, in a multi-institutional study (European and American) of cN1-3 patients who were treated with induction MVAC or GC chemotherapy followed by RC. Median OS was not reached, 45 and 14 months for patients with ≤ pT1N0, pT2-4aN0 and pTxN1-3 disease, respectively (P<0.001). pN0 rate was 48%. On multivariate analysis, OS was associated with pN0 and negative margins (11).

In conclusion, NAC for stage T2-T4 N0/N+ M0 MIBC is associated with a clinically significant pathological response (pPD/pCD), even in cN1-3 disease. The best outcomes are seen for patients receiving induction ddMVAC and ddGC chemotherapies. Pathologic downstaging is associated with improved PFS and OS and should be considered as a powerful surrogate marker which can be used to assess the efficacy of new neoadjuvant treatments.