Urothelial cancer (UC) is the most common malignancy of the urinary tract and the ninth most common cancer with 510.000 new cases diagnosed worldwide in 2015 (1). After treatment for muscle-invasive bladder cancer (BC) by radical cystectomy, around 35% of patients develop local or distant recurrence, resulting in a 5-year recurrence-free survival (RFS) of 58.3–68.0%. Median cancer-specific survival (CSS) after recurrence is only 6.9 months (2,3). Over two-thirds of patients with UC recurrence after radical cystectomy die within 12 months (3).

Metastasis-directed therapy (MDT) is common practice in different fields of oncology. Some patients with limited UC recurrence, also referred to as oligometastatic UC, could be considered candidates for MDT by surgical resection or targeted radiotherapy. Retrospective uncontrolled series, limited by low granulation in data, suggest a benefit of surgical removal of UC recurrence in highly selected patients, mostly in combination with systemic CHT (6-8). We aimed to identify prognostic factors for OS, CSS, and secondary RFS (RFS2) after metastasectomy for patients with oligometastatic UC in a single high-volume center.

We queried the UC registry of the University Hospitals Leuven from 1999 to 2018 after approval of the Ethics Committee Research UZ/KU Leuven (local study number S59188) to identify patients with metastasectomy for oligometastatic UC. The following search terms were used: “urothelial cancer” (and synonyms) in combination with “metastasis”, “metastases”, “oligometastic” or “solitary metastasis”. A retrospectively chart review was performed by a doctoral researcher (TM) who was not involved in the treatment. Patients were identified by reviewing admission notes and surgery reports of the Departments of Urology and Thoracic Surgery. We defined oligometastatic UC as recurrence of UC in a single organ with ≤3 metastases. Inclusion criteria were initial treatment with curative intent with pathology-proven UC, metastasectomy with curative intent of metastasis in a single organ with ≤3 metastases, and good performance status (ECOG ≤2). Exclusion criteria were palliative resections without curative intent, duration of follow-up <90 days, and inconsistency between pathology of the primary tumor and the metastasis.

Follow-up was performed every 3 months for 2 years, then every 6 months for 3 years and annually thereafter. We defined loco-regional recurrence as recurrence within the cystectomy bed and/or the pelvic lymph node template. Distant metastases were defined as lymph nodes above the aortic bifurcation for BC, non-regional lymph nodes for UTUC, bone metastases and/or visceral metastases.

Analyses were performed in R (version 3.4.3) using the ‘dplyr’, ‘survival’, and ‘survminer’ packages. Summary statistics were presented for continuous variables as median with interquartile range (IQR) and for categorical variables as frequencies and proportions. Kaplan-Meier plots were used to visualize survival data. Log-rank was used to compare survival between groups.

After applying inclusion and exclusion criteria (Figure 1), we identified a total of 22 patients whom underwent metastasectomy for UC recurrence with a median interval between primary surgery with curative intent and metastasectomy of 28 months (IQR: 11.1–48.6). Median follow-up after metastasectomy was 24.9 months (IQR: 11.9–82.1) with a minimum follow-up of 4.0 months. Clinical and pathological characteristics, locations of UC recurrences, and type of primary surgery are summarized in Table 1. Nineteen patients (86.3%) developed metastasis following radical surgery, while 3 patients (13.6%) developed a metastasis following transurethral resection of bladder tumor (TURBT): 1 patient with pTa BC and endoscopically treated pTa UTUC, 1 patient with pT1 BC without UTUC, and 1 patient with pT2 BC without UTUC who was diagnosed with a solitary lung lesion 20 days after TURBT and received radical treatment after the metastasectomy. Neoadjuvant CHT (Gemcitabine-Cisplatin) was administered to 3 patients who underwent radical cystectomy as primary treatment. CHT was administered to 2 patients before undergoing metastasectomy: in 1 patient with liver metastasis and 1 patient with testicular metastasis. Both patients had good response to CHT and metastasectomy was performed as consolidation therapy. Other reasons to opt for metastasectomy were: histopathological confirmation of metastatic disease (68.2%), resection of limited loco-regional recurrence (13.7%), surgery due to intolerance to CHT (4.5%), and resection of tumoral seeding in an afunctional renal transplant (4.5%).

Table 1 Clinical and pathological characteristics of all patients
Full table

Survival in all patients 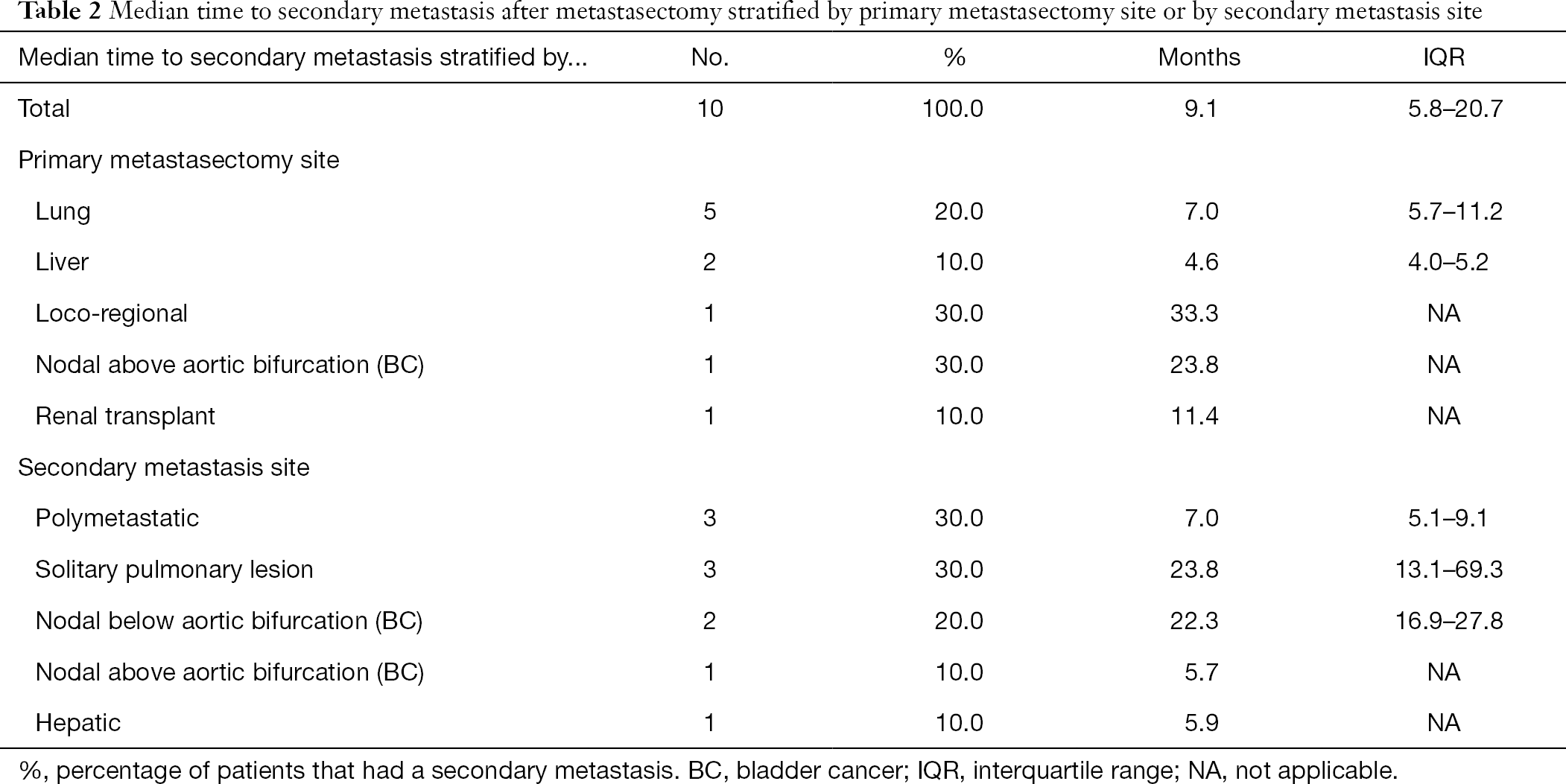 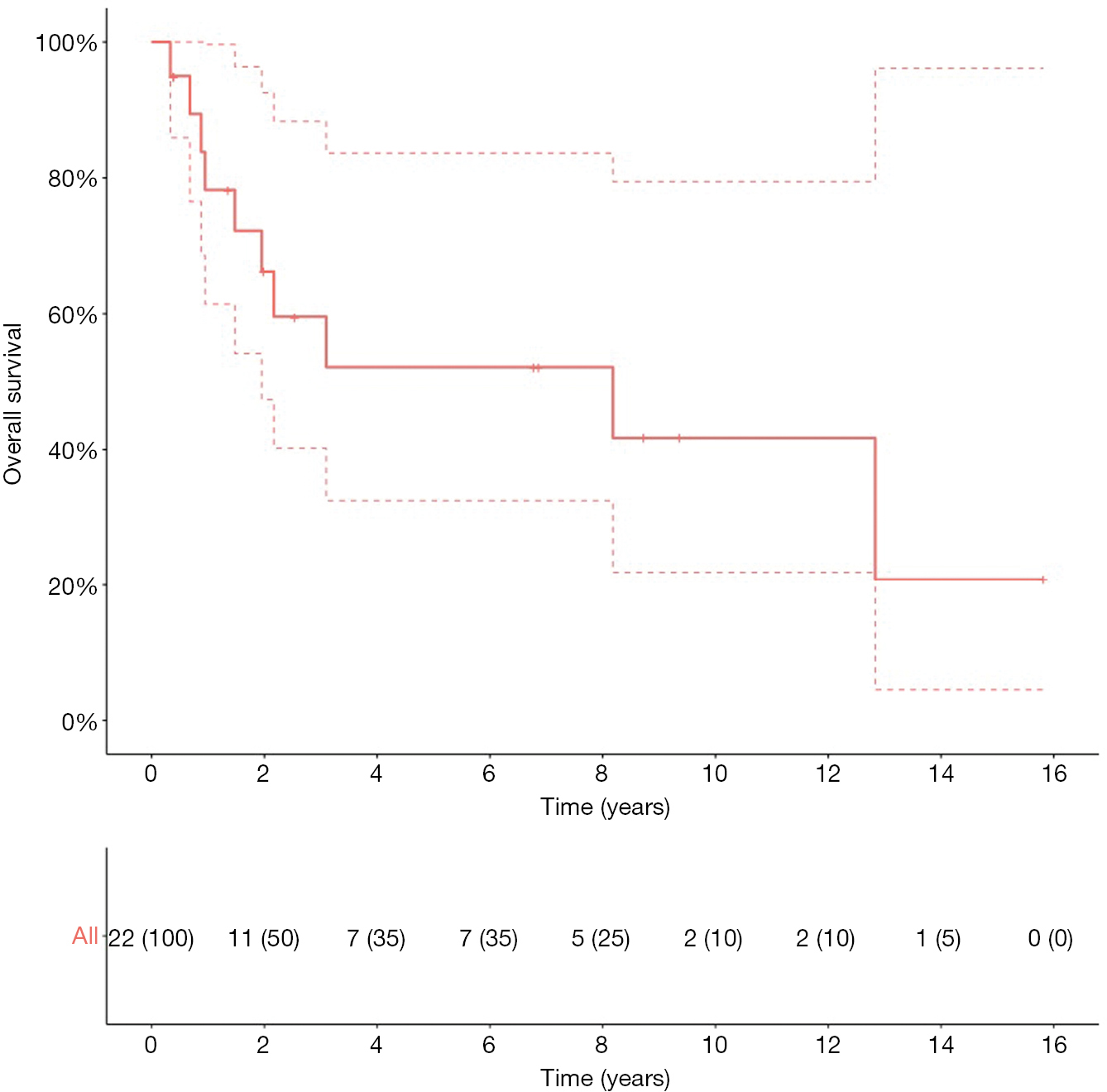 Figure S1 OS of all patients (n=20) that did not receive any CHT prior to metastasectomy with a median OS of 98.2 months (IQR: 23.4–NR). Dotted lines are the CI. OS, overall survival; CHT, chemotherapy; IQR, interquartile range; NR, not reached; CI, confidence interval. 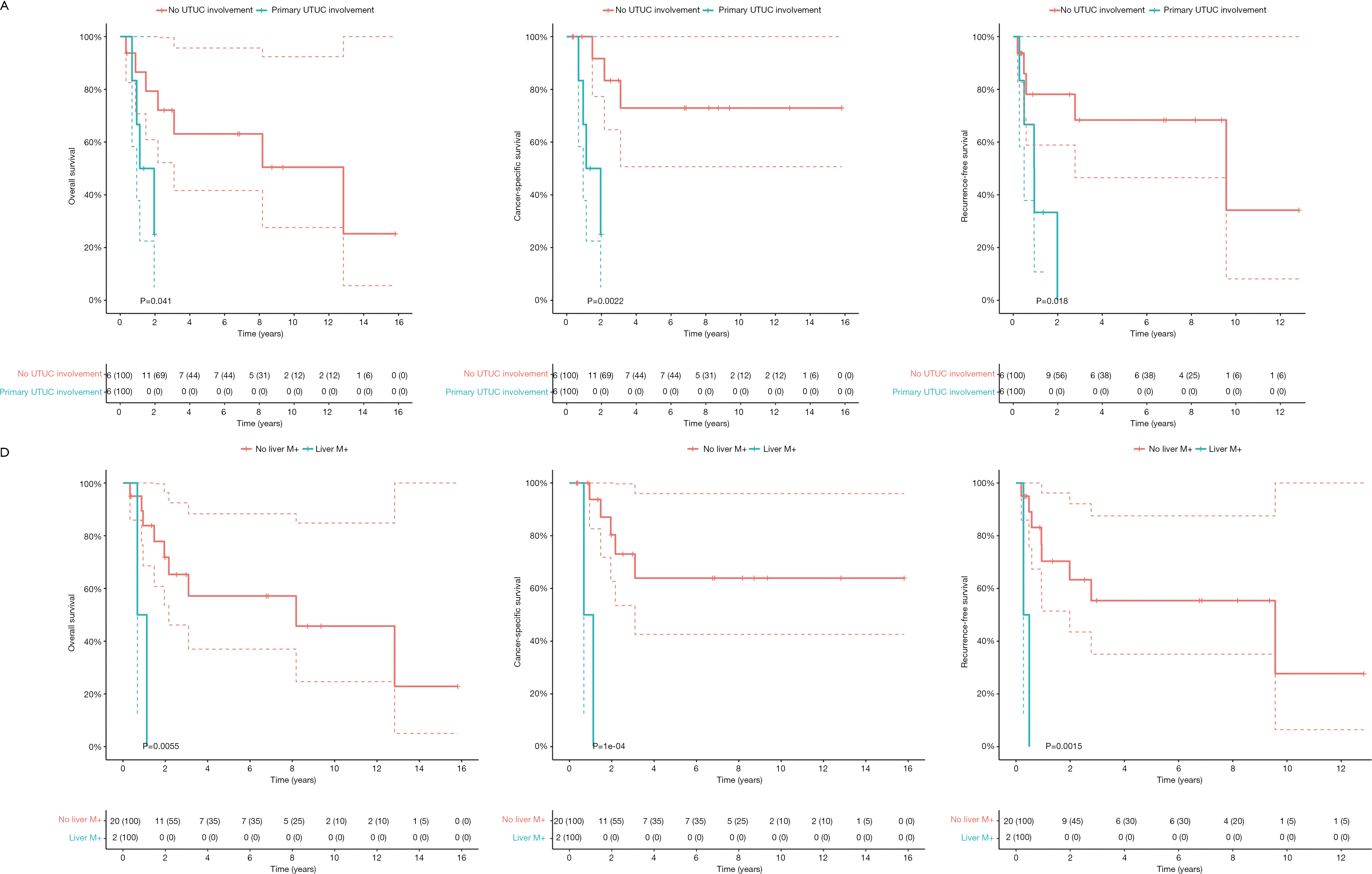 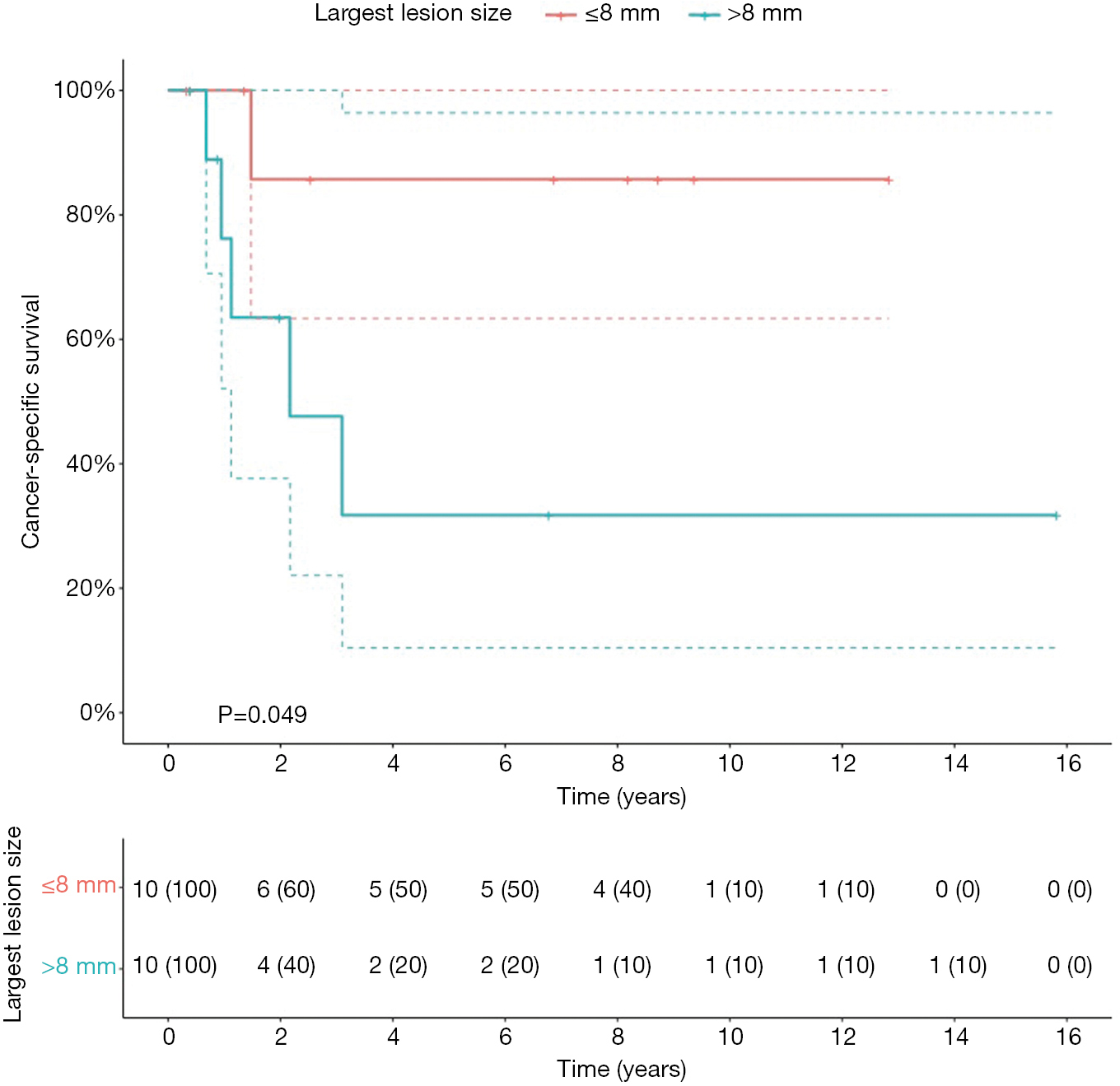 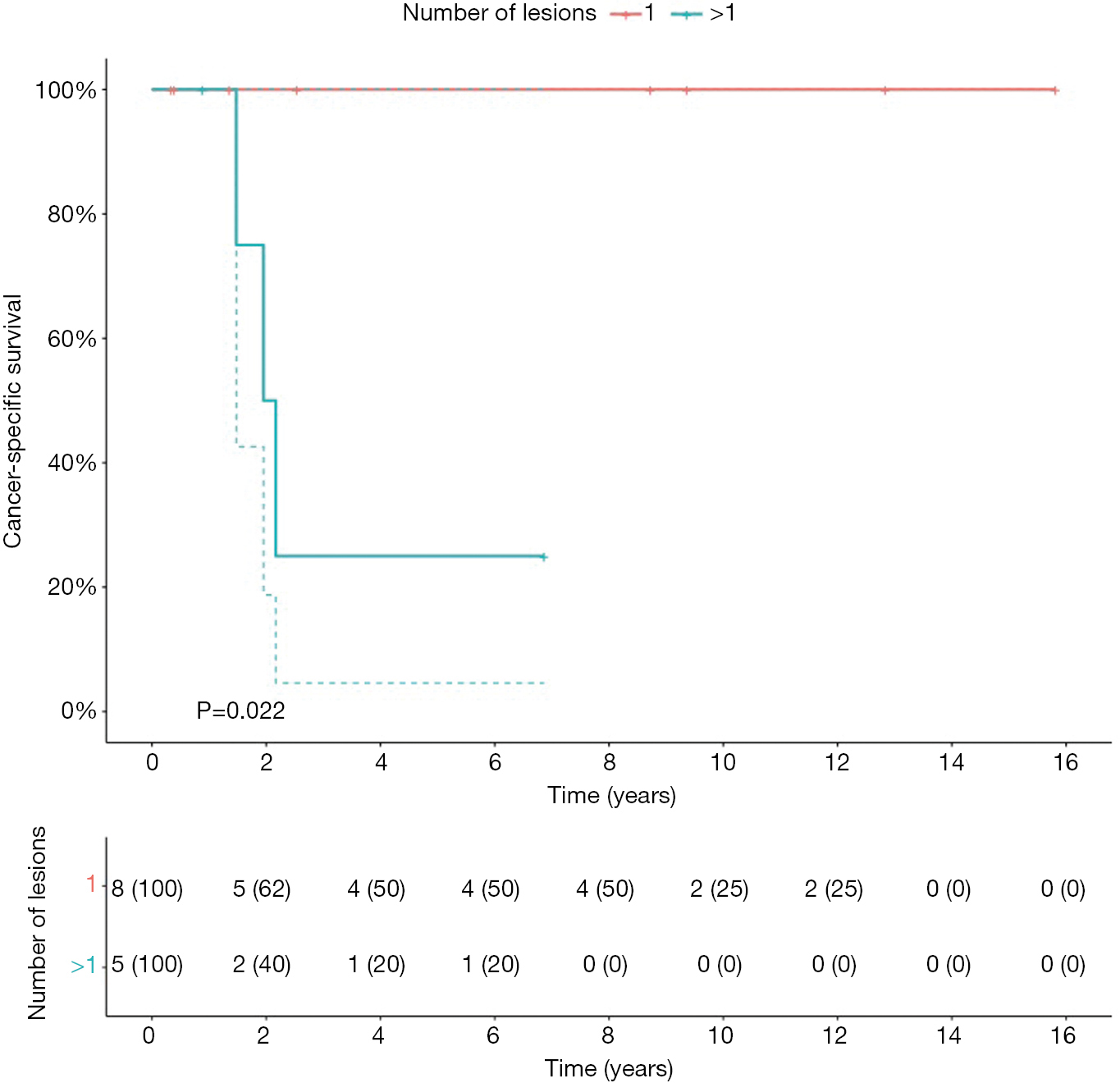 Figure S4 CSS of patients treated with pulmonary metastasectomy (n=13) stratified by number of lesions: solitary vs. >1. Patients with more than one lesion had a significant worse CSS. Dotted lines are the CI. CSS, cancer-specific survival; CI, confidence interval. 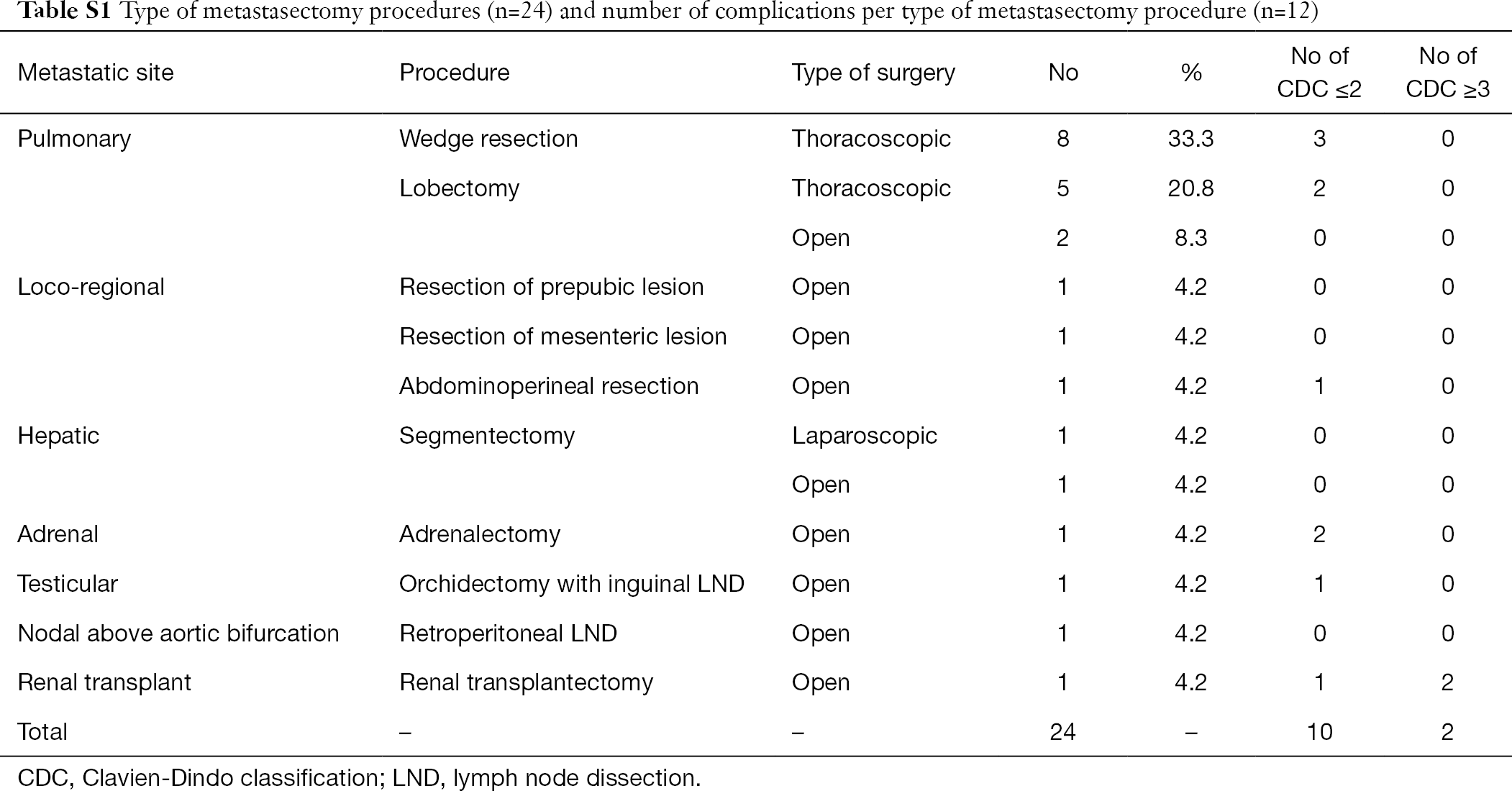 We report a single-center series of 22 patients with oligometastatic UC who were treated with metastasectomy with a 5-year OS of 51.4%. In this study, we identified several clinical variables that were prognostic for survival. First, our results suggest that patients with primary UTUC involvement or with hepatic metastasis have significant worse OS, CSS, and RFS2. Patients with a lesion size >8 mm demonstrated significant worse CSS. Second, patients who underwent a pulmonary metastasectomy had a long median OS of 154.0 months and a 5-year OS of 55.9%. Third, patients who underwent a pulmonary metastasectomy had a significantly worse CSS if they had >1 lesion. Patients with a solitary pulmonary lesion had a 5-year OS and CSS of 87.5% and 100%. Finally, we demonstrate the feasibility of metastasectomy as a procedure, with only two complications of CDC grade 3B that were both non-procedure related.

Patients in our series were treated within a 19-year long time span, in which clinical practice, imaging and therapies for metastatic UC have changed. Although treatment options for patients with metastatic UC have been limited during the last decades, CHT regimens have improved outcome in this patient population (7). Furthermore, the treatment landscape of metastatic UC has revolutionized with the advent of ICIs, which successfully target the PD-1/PD-L1 axis (11). Although these novel drugs deliver promising results, the ORRs remain limited. Therefore, selected patients could benefit from other treatment types such as a metastasectomy. Accumulating data show that survival can be improved with metastasectomy (12,13). The benefit of metastasectomy has been demonstrated in other cancer types such as colorectal and renal cancer with a similar proliferation index as UC (14). However, patient selection is key. Patients with UC metastases who are amenable for metastasectomy are those with a relative long interval between primary surgery and UC recurrence, and with a good performance status. Our findings suggest that patients with pulmonary metastases benefit most from MDT. Moreover, better results were observed with small (≤8 mm) or solitary pulmonary lesions. Our lesion size cutoff of 8 mm was chosen based on statistical significance on univariate analysis. Other series have suggested a cutoff of 3 cm for pulmonary lesions, which could not differentiate significantly between patient groups in our cohort (15). Our results suggest that patients with primary UTUC involvement or hepatic metastases should be counseled cautiously for metastasectomy, as our results show that these patients had worse outcome after metastasectomy. The advantages and disadvantages of the procedure should be discussed with the patient during the attempt to increase their survival without putting the patient at risk of increased complications. Although we cannot draw strong conclusions from our retrospective cohort, our results can help clinicians when selecting appropriate patients for metastasectomy.

Our results confirm the findings of other retrospective series and suggest that patient selection could be based on number, location and size of metastasis (7). In this way, systemic platinum-based CHT and/or ICIs can be spared for further recurrences. Our reported 5-year OS of 51.4% and median OS of 98.2 months are longer than reported by other series, however, within the limits reported by the meta-analysis of Patel et al. for metastasectomy in which various metastatic sites were included (6,16-18). Our 5-year OS of patients treated for any pulmonary metastasis (55.9%) and for a solitary pulmonary metastasis (87.5%), were in concordance with the results of pulmonary metastasis-only patients in the same meta-analysis (6). Moreover, we report a limited complication rate with a total of 12 complications for 24 metastasectomies. Only 2 complications were CDC grade 3B and occurred after the same procedure and were non-procedure related, which illustrates the feasibility of this approach.

Till now, due to retrospective studies with limited number of cases, no strict criteria for the selection of patients for metastasectomy could be determined. Different centers have used their own eligibility criteria, with most of them being similar, such as good response to CHT, recurrence at the site of initial surgery, a solitary metastasis, feasibility of complete surgical resection of metastasis, no evidence of rapid progression at another metastatic location, or as a consolidative treatment with a period of disease stability (i.e., 3 months) between CHT and metastasectomy (17-19). In a similar concept, we meticulously selected our patients: most patients had a good performance status (ASA ≤2 and ECOG ≤2), had metastases that could be completely resected with negative surgical margins, and were willing to undergo aggressive treatment. Therefore, this cohort remains a highly selected subgroup of patients.

The difference in survival after metastasectomy between patients with primary BC or primary UTUC has not been demonstrated in all retrospective series (7,20). The limited survival of patients with primary UTUC involvement in our cohort could be explained by the fact that both diseases are actually different disease entities with a different pattern of metastasis (21). The differences in primary disease being either primary BC, primary UTUC, or a combination of both could also have an impact on outcome, which could have biased our results.

This study is not devoid of limitations. The retrospective non-randomized design of our study leads to an inherent selection bias, which could overestimate survival outcome compared with a real-life patient population, as the treated patients were deemed fit enough for metastasectomy. Heterogeneity in type of metastases, and type of metastasectomy procedure combined with a relatively small number of patients are the main limitations of our study. Due to the small number of patients, our statistical analyses were limited to univariate log-rank tests, which limits the strength of our conclusions.

Our study challenges the dogma that patients with metastatic UC are incurable and should be treated with systemic therapies only. We believe that the future lies in a multimodal approach in patients with oligometastatic disease that consists of a combination of surgery, radiotherapy and standard or new emerging systemic therapies that addresses the metastatic lesion(s) and also the presence of possible systemic disease. Future randomized clinical trials incorporating a molecular work-up using predictive biomarkers for treatment selection are urgently needed in the setting of oligometastatic UC.

Metastasectomy of oligometastatic UC recurrence is feasible and can achieve durable cancer control in a highly selected subgroup of patients. Our results suggest that patients with hepatic metastases, primary UTUC involvement or larger lesions (>8 mm) can be considered as poor candidates for metastasectomy, while patients with a solitary pulmonary lesion might benefit most. Metastasectomy should always be discussed within a multidisciplinary team. Well-designed multi-center randomized clinical trials should be performed to define patient selection criteria for metastasectomy in this setting.

Conflicts of Interest: All authors have completed the ICMJE uniform disclosure form (available at http://dx.doi.org/10.21037/tau-19-624). The authors have no conflicts of interest to declare.

Ethical Statement: The authors are accountable for all aspects of the work in ensuring that questions related to the accuracy or integrity of any part of the work are appropriately investigated and resolved. All procedures performed in this study working on human participants were in accordance with the ethical standards of the institutional research committee and with the 1964 Helsinki Declaration and its later amendments or comparable ethical standards. For this type of study, formal consent is not required.