Bladder cancer is one of the most common cancers of the urogenital system (1). About 25% of patients diagnosed with bladder cancer for the first time are diagnosed with muscle invasive bladder cancer (MIBC). Of patients diagnosed with non-muscle invasive bladder cancer (NMIBC), about 20–30% progress to MIBC (2,3). MIBC is an aggressive disease with high risk of metastasis and poor prognosis (4). The standard treatment for MIBC is radical cystectomy with pelvic lymph node dissection (PLND) (5,6). Despite radical cystectomy, 10-year cancer-specific survival (CSS) rate after radical cystectomy for MIBC patients is only about 67% (7). In the case of node positive patients, the 10-year CSS rate is about 17% regardless of the stage of the primary tumor (7). Many patients tend to relapse after surgery probably due to micro-metastasis at or before radical cystectomy (8,9). To improve these results, neoadjuvant chemotherapy (NAC) has been used since the 1980s (10). It has been shown that cisplatin-based NAC can increase overall survival (OS) by 5–8% (11). NAC is recommended for patients with clinical T2, T3, or T4a N0M0 in several guidelines (11,12). In the Southwest Oncology Group (SWOG) Intergroup study, radical cystectomy after NAC improved complete pathologic response by 23% and median OS by 31 months compared with cystectomy alone (5). In a randomized control study for cT2–4N0 patients, NAC and radical cystectomy improved the OS by 16% and complete response by 21.2% compared to radical cystectomy alone (6). However, the role of NAC in patients under T2 is controversial. The purpose of this study was to compare the clinical course differences in patients with pathologic T2N0M0 or lower after NAC and those with pathologic T2N0M0 or less who did not undergo NAC.

The Institutional Review Board of Seoul National University Hospital approved this retrospective study and waived the requirement to obtain informed consent from patients. All research and related protocols used in this study complied with the principles of the Declaration of Helsinki. We retrospectively reviewed medical records of patients who underwent radical cystectomy with bladder cancer from January 1991 to December 2016. Patients with T2 or less N0M0 were included in this study. All patients underwent radical cystectomy and standard PLND or extended PLND. Only pathologically confirmed patients with urothelial carcinoma (UC) were included. Patients with previous chemotherapy history except NAC were excluded, Patients with previous other cancer treatment or with metastasis were also excluded. Patients were divided into two groups: those who received NAC and those who did not. TNM stage and tumor grade were classified according to the 2010 American Joint Committee on Cancer classification and the 2004 World Health Organization/International Society of Urologic Pathology consensus classifications. We collected information such as patient age, body mass index (BMI), sex, American Society of Anesthesiologists (ASA) physical status, clinical TNM stage, pathological TNM stage, margin positive, number of lymph node (LN) removed, whether to perform NAC, number of NAC cycles, and various oncologic results including recurrence and mortality. In the absence of recurrence or metastasis, most patients underwent a routine test every 3 months for 3 years after surgery and every 6 months for 4 to 5 years. Thereafter, routine test was conducted once a year. Routine test included laboratory test, urine test, urine cytology, and bladder cystoscopy. Patients with neo-bladder included a post-voided residual urine check using ultrasonic bladder scan. Radiological test such as chest computed tomography (CT), abdomen-pelvis CT, and bone scan were performed once a year. NAC used cisplatin and gemcitabine regimen or methotrexate, vinblastine, doxorubicin, and cisplatin (MVAC) regimen. The number of NAC cycles was 2 or 3. Continuous variables are expressed as means and standard deviations (SDs) or median values and intermediate ranges (IQRs) while categorical variables are expressed by the frequency of events (%). Primary endpoint was OS. Secondary endpoint was recurrence-free survival (RFS). All survival results were analyzed by Kaplan survival analysis and log-rank test. Cox regression analysis was used to analyze factors associated with various oncologic outcomes. All statistical tests were performed using IBM SPSS Statistics, version 22.0 (IBM, Armonk, NY, USA) and STATA version 14 (StataCorp LP, College Station, TX, USA). A P value of less than 0.05 was considered to indicate statistical significance.

A total of 857 patients underwent radical cystectomy with bladder cancer from January 1991 to December 2016 in a tertiary institution. All patients with pathologic findings of UC and less than pT2N0M0 were included in this study. The total number of patients included in the study was 526. Patients were divided into three groups according to the presence or absence of NAC: (I) non-NAC, those who did not receive NAC; (II) partial NAC, those who received less 3 cycles of NAC; and (III) complete NAC, those who received 3 cycles of NAC. 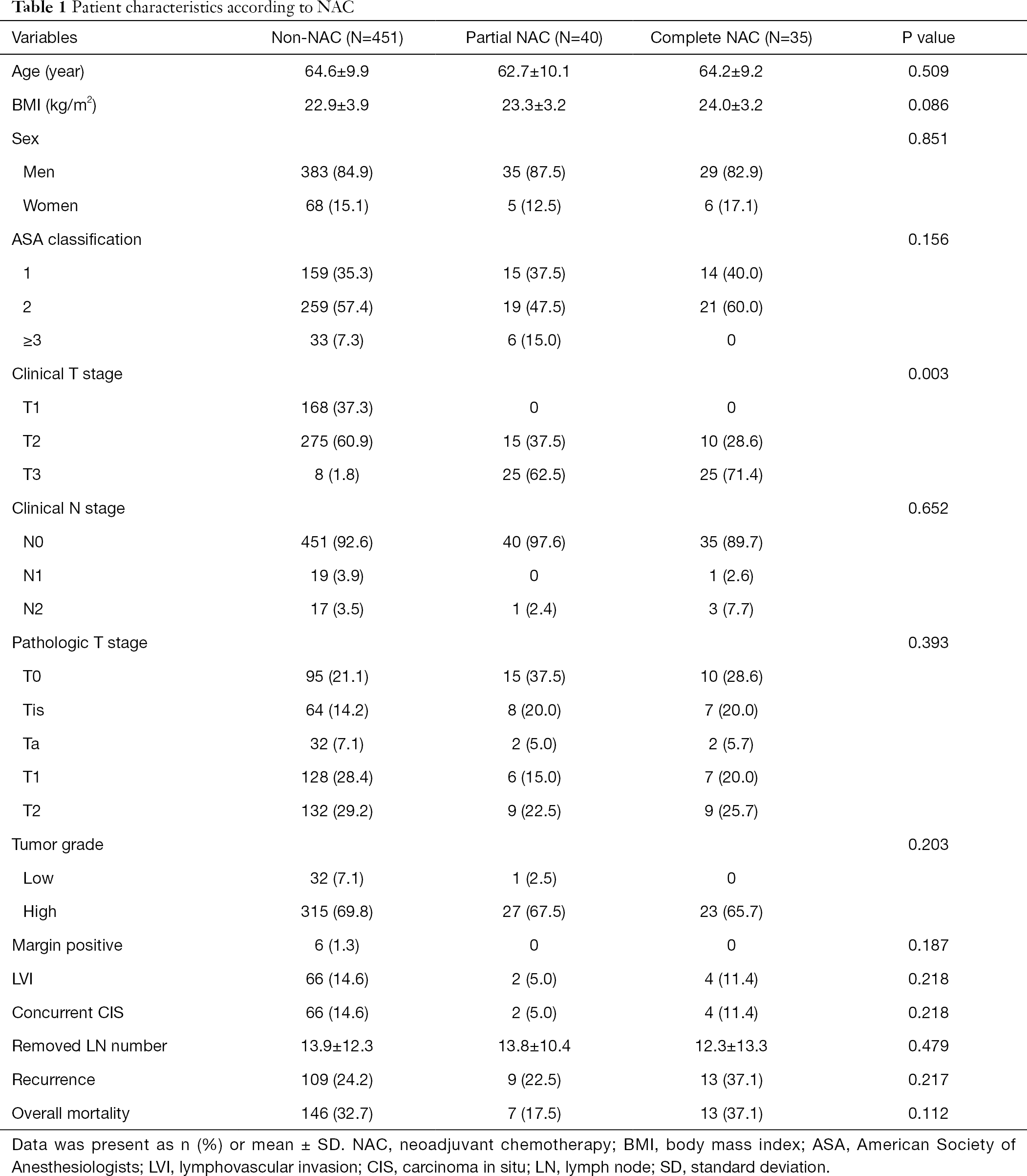 Survival outcomes according to NAC 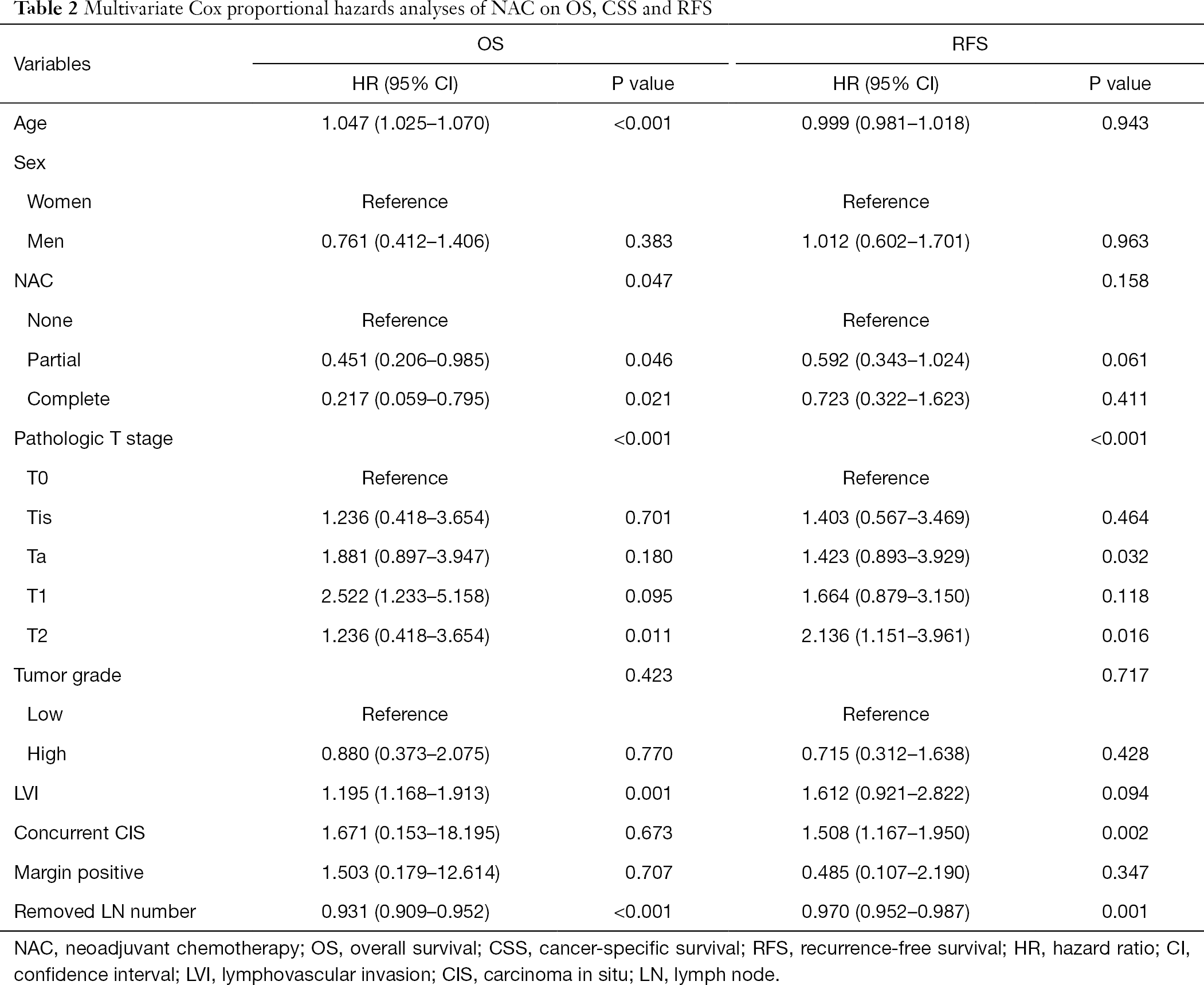 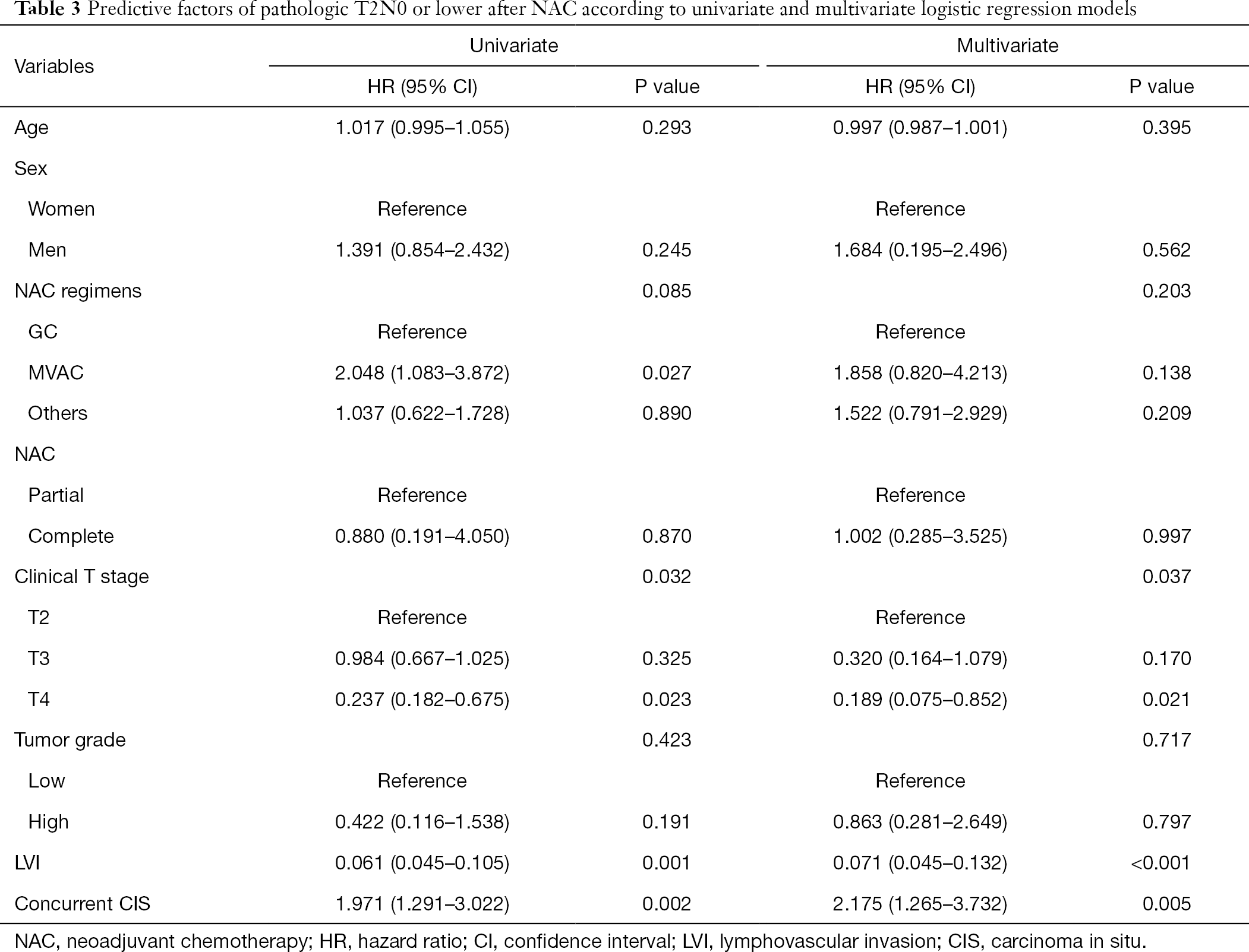 The purpose of NAC before radical cystectomy is to reduce preoperative microinvasion and recurrence (distant recurrence and locoregional recurrence) (13). In several guidelines, NAC is recommended for patients with T2–T4a N0M0 (2,12) because microinvasion is thought to be higher in T3 or T4 with more tumor burden than T2 with smaller tumor burden (14). In the present study, the percentage of high stage above cT3 was higher in the partial and complete NAC groups than that in the non-NAC group. NAC has several advantages. One of them is that NAC affects pathologic status, enabling pT0 or pN0 postoperatively and enabling negative surgical margin (5,13). In clinical T stage, cT2 and cT3 in NAC-administered group was higher than in the non-NAC group. However, in pathologic T stage after surgery, the ratio of T0 in NAC-administered group was similar to or higher than that in the non-NAC group (Table 1).

In a study of MD Anderson’s clinical risk stratification, patients with pT0–4N0/+ were included. And patients were divided into high- and low-risk groups according to hydroureteronephrosis, LVI, micropapillary or neuroendocrine features, and cT3b–4a stage. The 5-year survival rate for low-risk patients with RC without NAC was 68% (15). In other studies, the 5-year survival rate of low-risk patients who underwent RC without NAC ranged from 77% to 100% (9,16). Based on these studies, the authors recommend ACH after RC rather than NAC in low-risk groups (9,15,16).

Our research has several limitations. First, it was a retrospective study rather than a randomized study. Second, the significant difference may be insufficient for T0 downstaging with various oncological outcomes and survival rate because it is a prime number of NAC group compared to non-NAC group. Third, those who had missing data were included in this study. Due to the nature of this retrospective study, some patients did not receive NAC for preoperative low renal function or had poor performance status. This might lead to some bias for the result of survival outcome. Fourth, we considered NAC without considering previous TURB or intravesical treatment. Fifth, there may be diversity or limitations of potential interoperability with data from a single center.

NAC is eligible for low-risk patients with stage below pT2N0. NAC showed favorable results in T0 down-staging and below pT2 downstaging. A patient with a high tumor burden prior to NAC treatment showed similar prognosis to patients with a low tumor burden after NAC. This will serve as a basis for appropriate treatment selection for MIBC patients.

Funding: This work was supported by a Basic Science Research Program through the National Research Foundation of Korea (NRF) funded by the Ministry of Education (NRF-2019R1F1A1050507).

Conflicts of Interest: All authors have completed the ICMJE uniform disclosure form (available at http://dx.doi.org/10.21037/tau-19-705). JHK serves as an unpaid editorial board member of Translational Andrology and Urology from Jan 2020 to Dec 2021. The other authors have no other conflicts of interest to declare.

Ethical Statement: The authors are accountable for all aspects of the work in ensuring that questions related to the accuracy or integrity of any part of the work are appropriately investigated and resolved. The study was approved by the Institutional Review Board of Seoul National University Hospital (H-1811-108-987) and waived the requirement to obtain informed consent from patients.