Overall, 60% of UTUCs are invasive diseases when diagnosed (2). Therefore, patients with UTUC usually feature with poor prognosis when tumors invade the muscle wall. Currently, the 5-year specific survival was less than 50% for pT2/pT3 diseases and less than 10% for pT4 diseases (3). Therefore, it was of great significance to explore the prognostic factors to improve the survival outcomes for UTUC patients. It was reported that the prognostic factors of UTUC can be divided into preoperative factors and postoperative factors, respectively (4). Preoperative factors mainly included age, sex, ethnicity, tobacco consumption and etc. (4-6), while tumor stage and grade, lymph node involvement, lymphvascular invasion and surgical margins were regarded as postoperative factors of UTUC (3,7-9). Unfortunately, the prognostic value of these parameters remained inconspicuous and accurate predictive tools were rare for UTUC patients.

Such dilemma can be attributed to relatively low prevalence of UTUC and the relative preponderance of urinary bladder carcinoma (UBC), so that much of the clinical decision of UTUC was made according to the evidence based on the UBC cohorts. While significant similarities exist between the two disease, ignorance of important difference may hinder us from optimizing therapy in patients with UTUC. Therefore, large cohort studies of UTUCs from multi-centers are necessary to achieve high-grade recommendations for UTUC management (2).

The purpose of our study was to explore the promising prognostic factors for UTUC based on the SEER database and to establish relevant nomograms to predict survival for UTUC patients.

SEER*Stat software (Version 8.3.6; NCI, Bethesda, USA) was applied to investigate the original data of patients diagnosed with UTUC from the Surveillance, Epidemiology, and End Results (SEER) database (http://seer.cancer.gov/). The SEER program is a population-based database which sorts out data on clinical data from 18 registries and covers about 28% of the United States population. Patients included in our study should meet the following criteria: (I) diagnosed as UTUC (International Classification of Diseases for Oncology: 8,120/3, 8,122/3, 8,130/3, 8,131/3) with positive histology; (II) primary site: C65.9 for renal pelvis and C66.9 for ureter; (III) age at diagnose was greater than or equal to 40 years old; (IV) complete data were available with active follow-up. In the meantime, the exclusion criteria of this study were as follows: (I) UTUC was not the first primary malignancy; (II) missing/unknown data existed in the included variables; (III) type of reporting source was death certificate only or autopsy only. Certainly, the final enrolled patients were all diagnosed between 2010 to 2015 to ensure a relatively long follow-up period.

To develop the survival nomograms and perform further validation, the final included patients were divided into two cohorts (the training cohort and the validation cohort) randomly at a ratio of 7:3 with the method of random-number generation. Comparisons of clinical characteristics between two groups were made utilizing the chi-square test.

Uni- and multivariate Cox proportional hazards regression analysis were conducted to explore the variables which can affect the OS and CSS significantly. Meanwhile, hazard ratios (HRs) with its corresponding 95% confidence intervals (CIs) of the risk factors were calculated. Then, prognostic nomograms to predict 3-year and 5-year survival probability were constructed according to the results of multivariate Cox proportional hazards regression analysis. Additionally, survival curves for different variables were performed by Kaplan-Meier (KM) analysis and were compared utilizing the log-rank test.

Finally, predictive ability of the survival models was evaluated. Calibration and the discrimination of the nomograms were measured both in the training cohort and the validation cohort. Discrimination was assessed by the Harrell's concordance index (C-index) and the receiver operating characteristic (ROC) curve (10,11). The area under the ROC curve (AUC) and the C-index range from 0.5 to 1.0, with 1.0 indicating a perfect discrimination ability and 0.5 suggesting the total chance (12). Furthermore, consistency between the expected survival and the observed survival was identified by calibration curves.

The chi-square test and Cox proportional hazards regression analysis were conducted using SPSS 23.0 software (SPSS Inc, Chicago, IL, USA). Rms and survival package were utilized to construct and validate the survival nomograms via RStudio software (Version 1.2.5001). During the whole analysis process, all tests were two sided, and P value <0.05 was considered to be statistically significant.

Three thousand five hundred and fifty-six patients diagnosed with UTUC between 2010 to 2015 were eventually included in this study (flow chart was present in Figure 1). Two thousand four hundred and ninety-two patients were divided into the training cohort while 1,064 patients were in the validation cohort. The training cohort was applied to develop and undergo internal validation of the survival nomograms while the validation cohort was assigned for external validation. 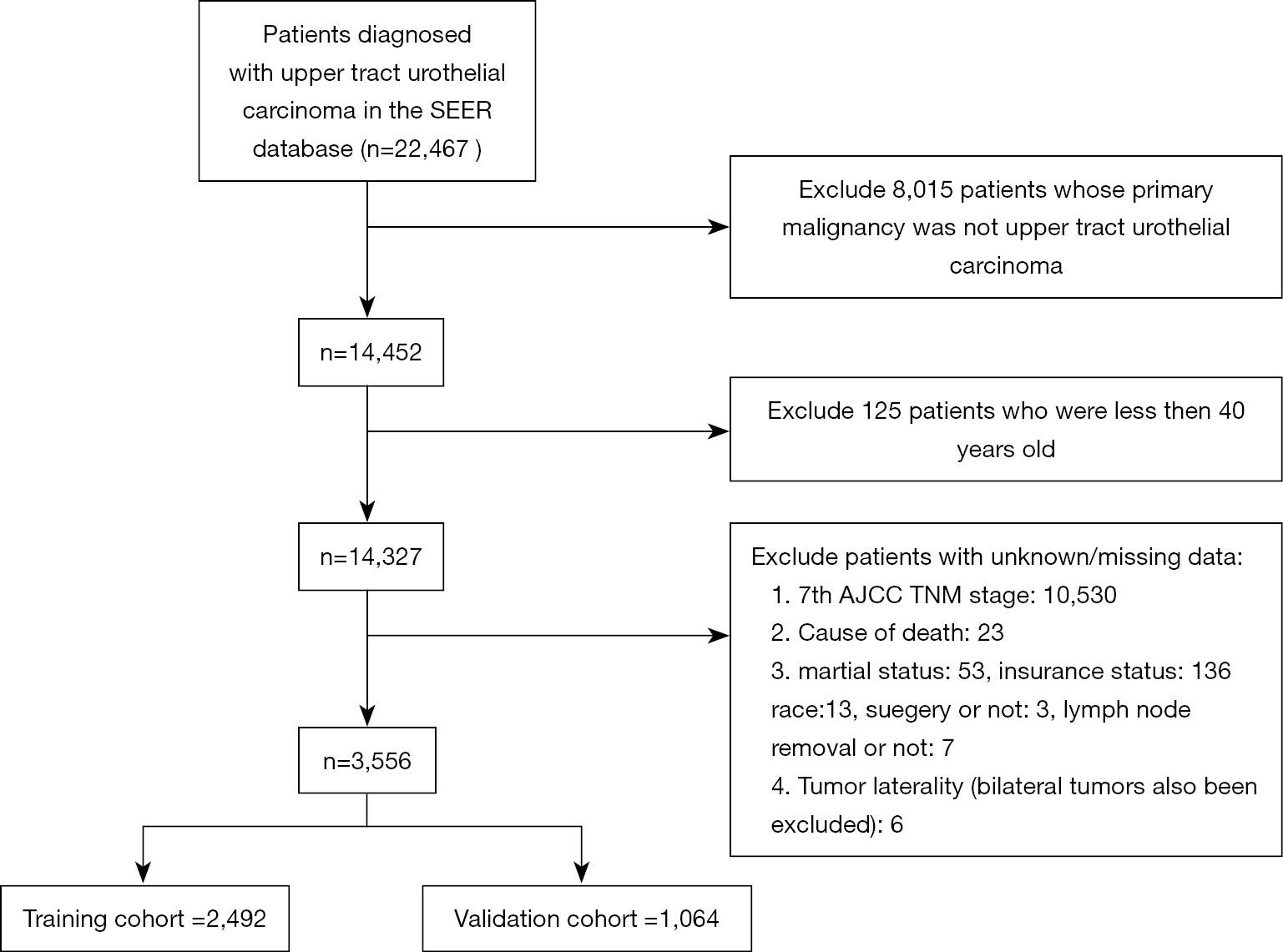 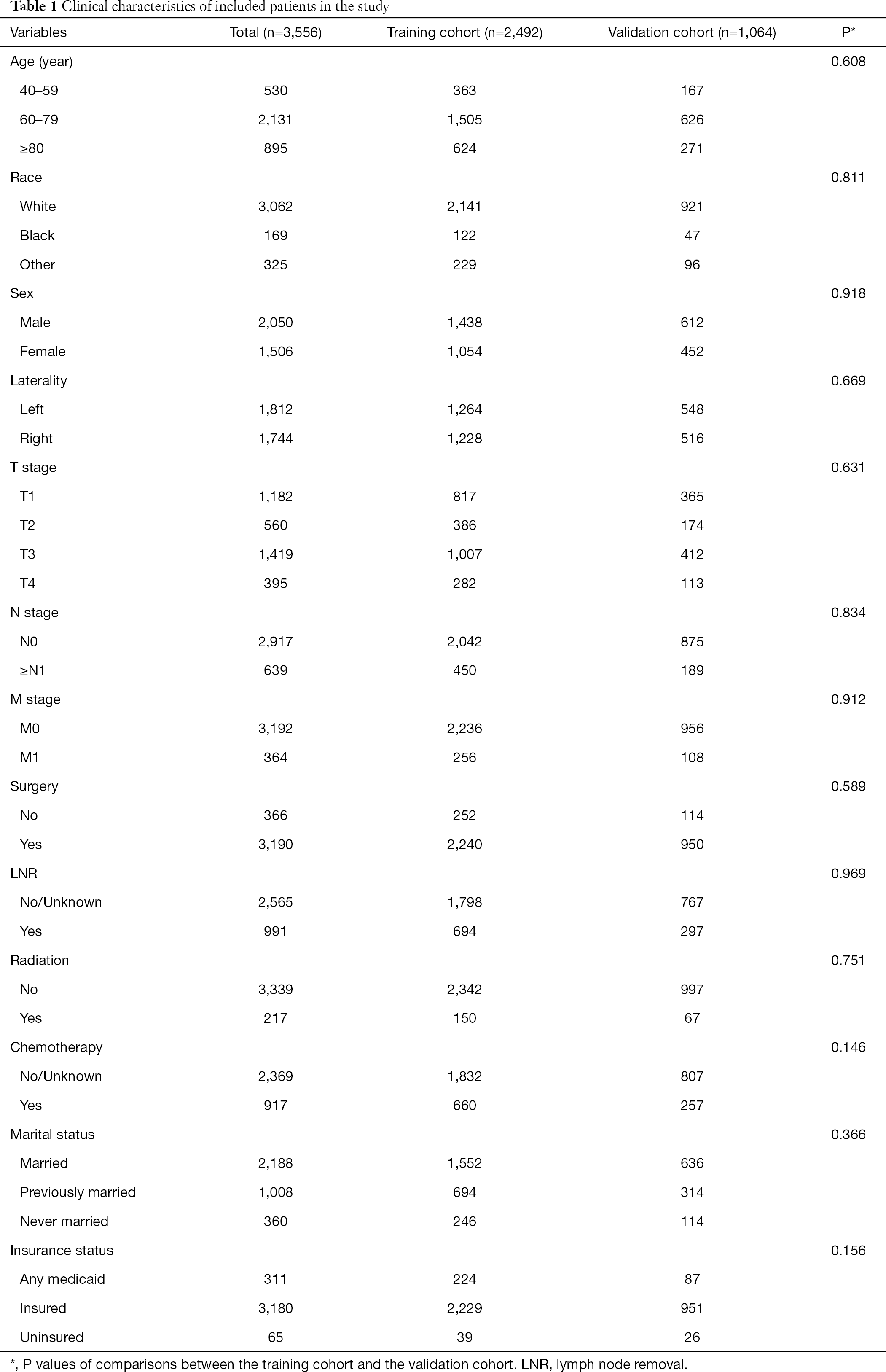 Twelve variables were enrolled in univariate Cox proportional hazards regression analysis, including age, race, sex, tumor laterality, TNM stage, use of surgery/chemotherapy/radiotherapy/LNR, insurance status and marital status. Then, 8 variables for OS and 9 variables for CSS were included in the multivariate Cox analysis for further exploration (Table 2 and Table 3, respectively). According to the results of multivariate Cox analysis, prognostic nomograms were conducted to predict the 3-year and 5-year OS and CSS probability (Figure 2). In the nomograms, a total point can be calculated by adding the score of each variable, from which survival probabilities can be assessed easily. Finally, KM survival curves for OS and CSS were generated to learn the actual effect of different variables (Figures 3,4). 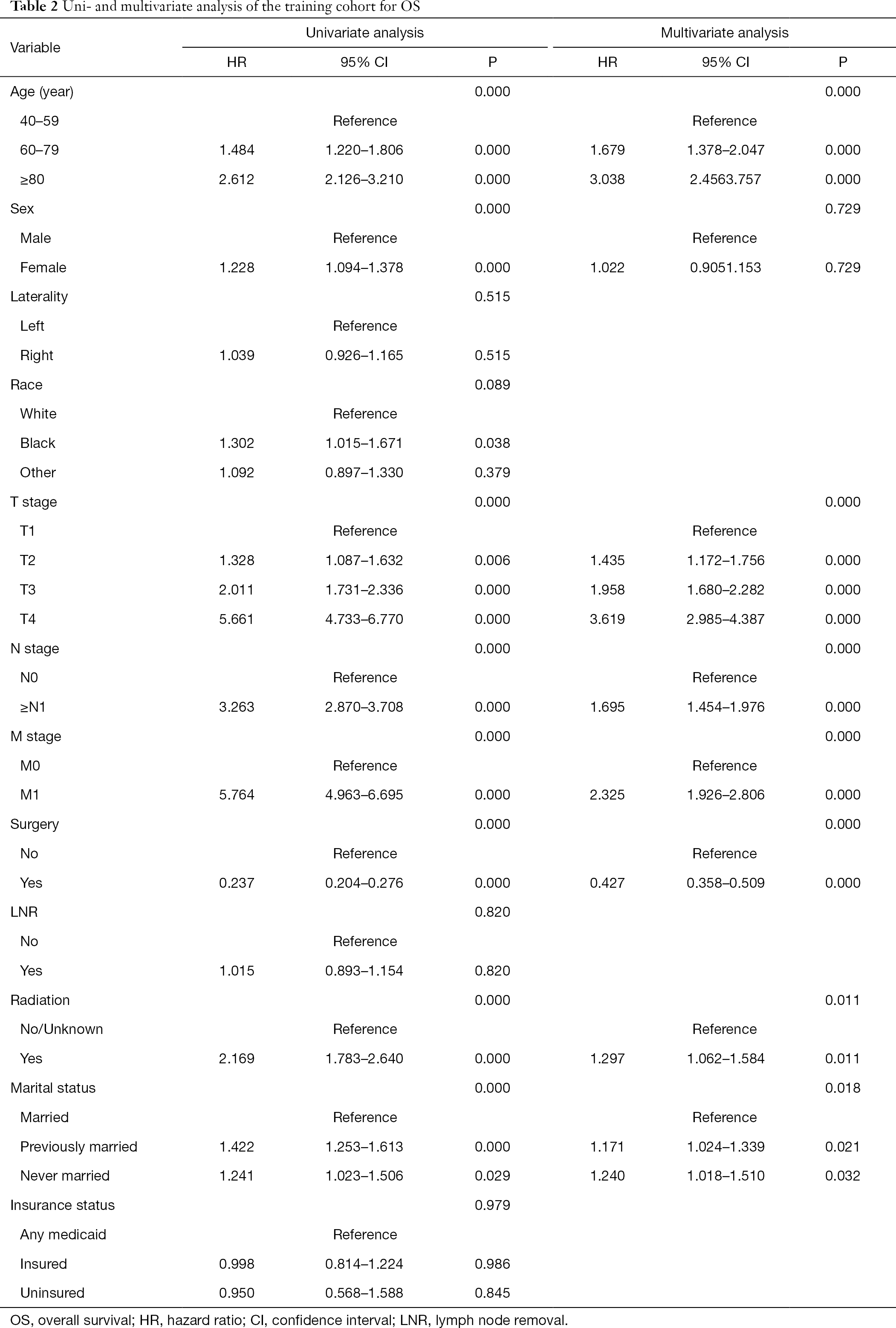 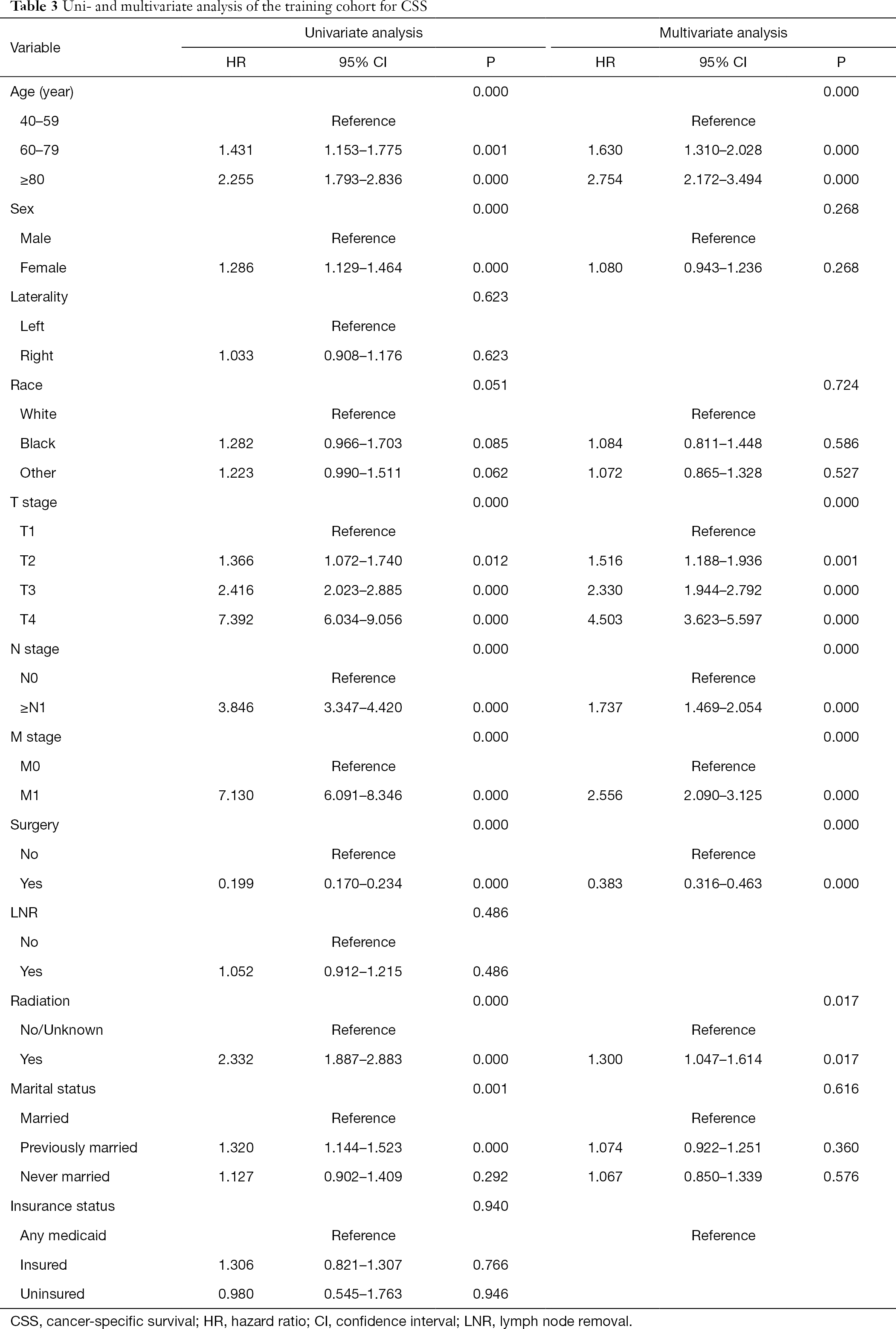 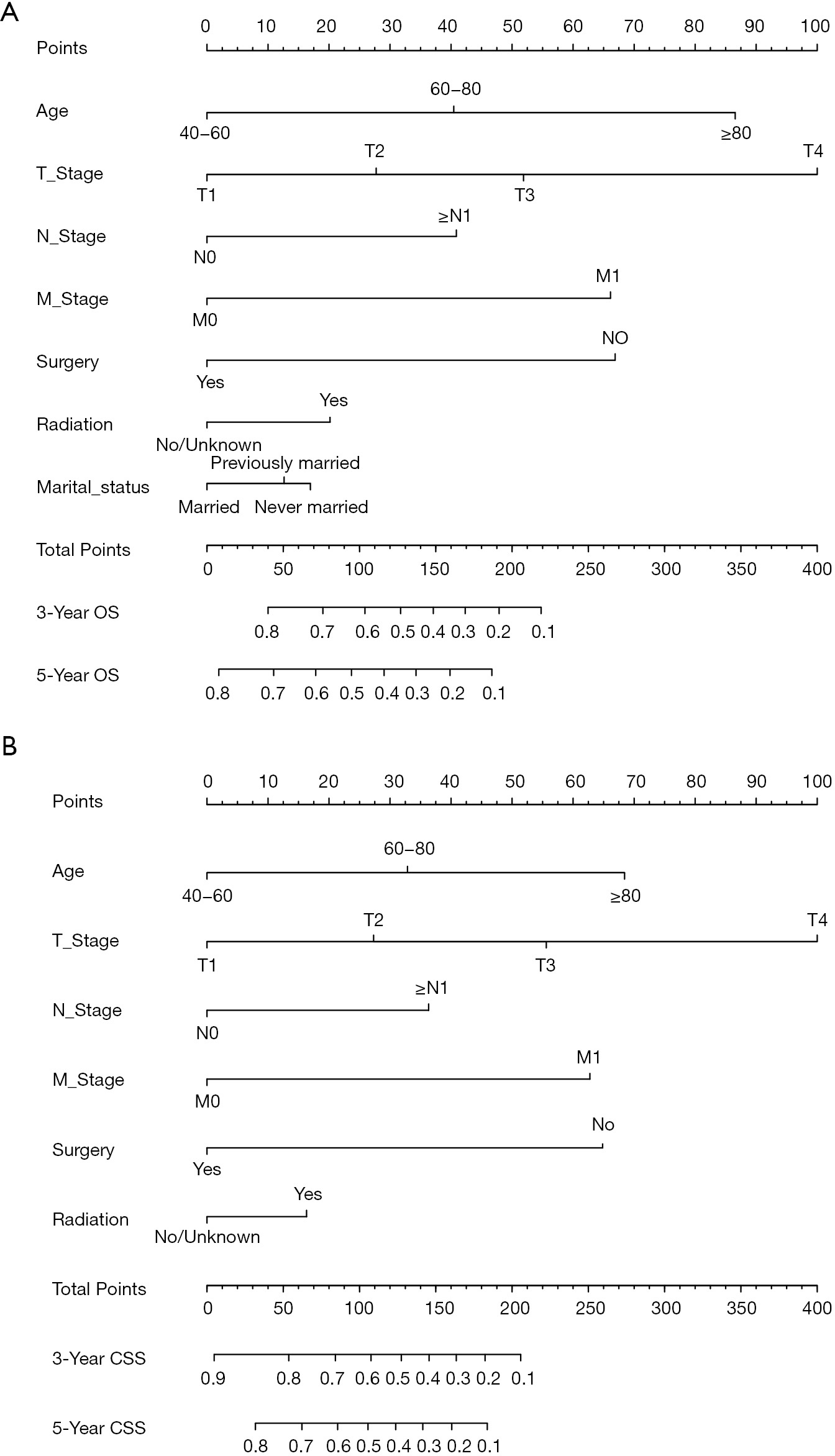 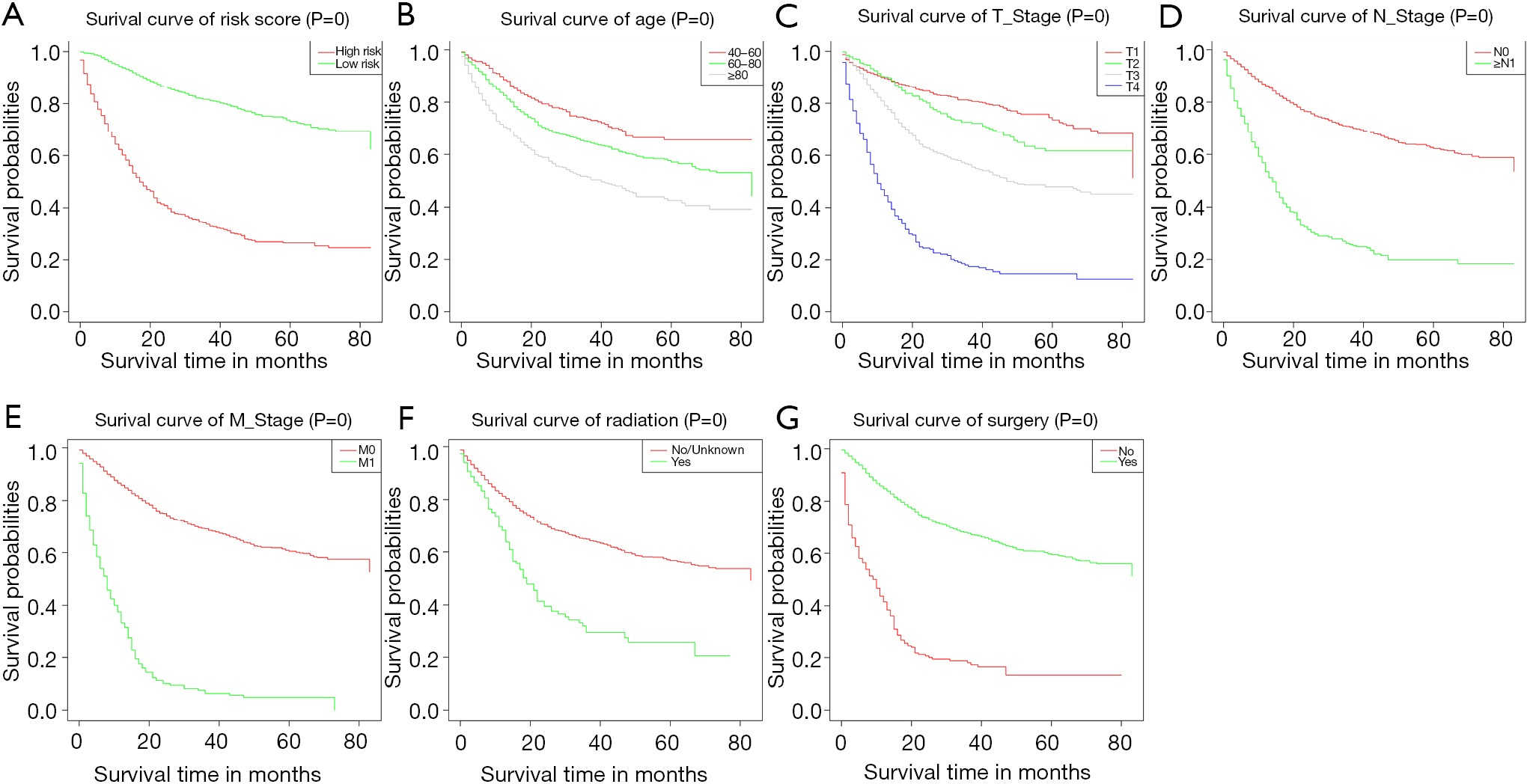 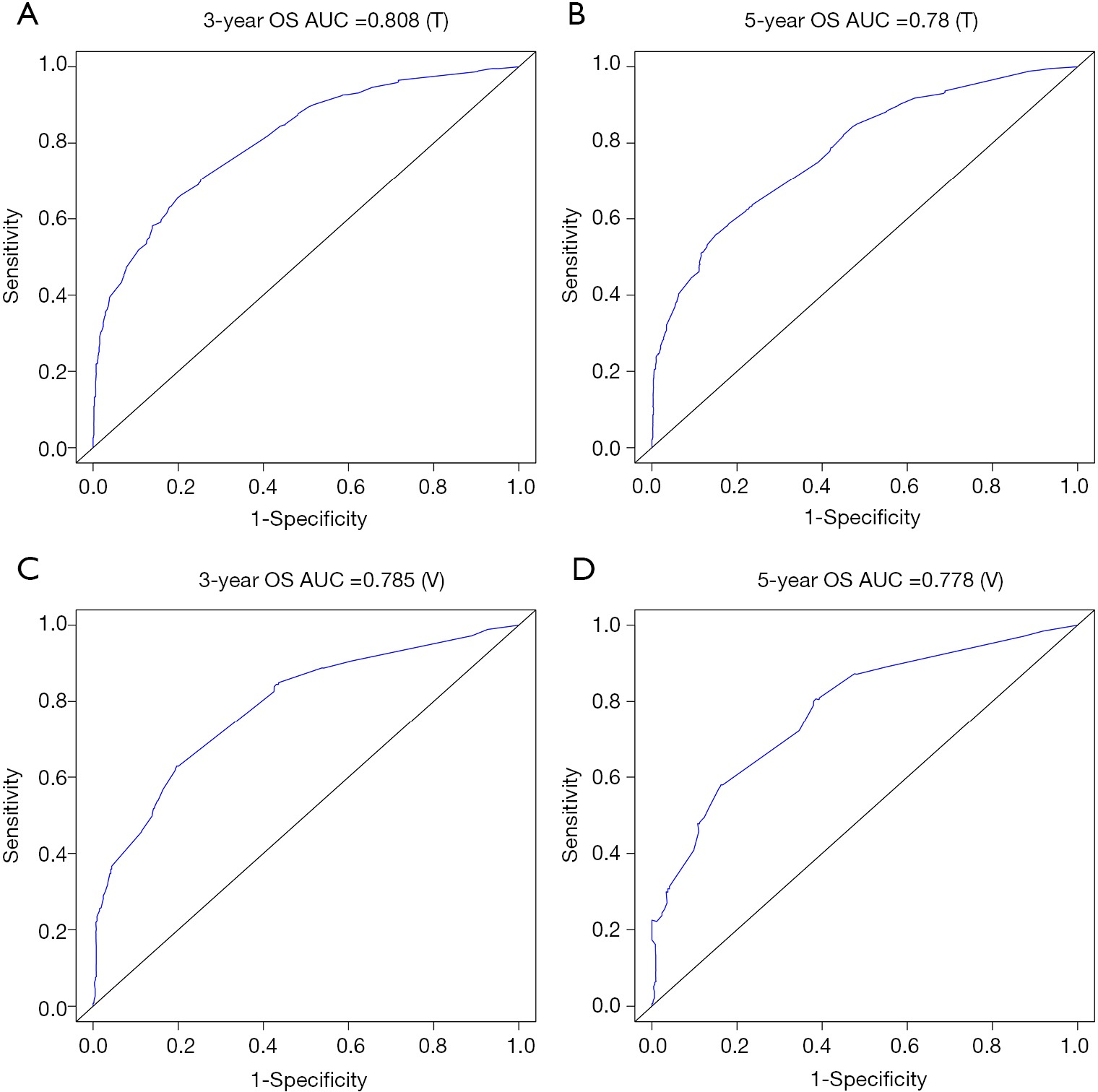 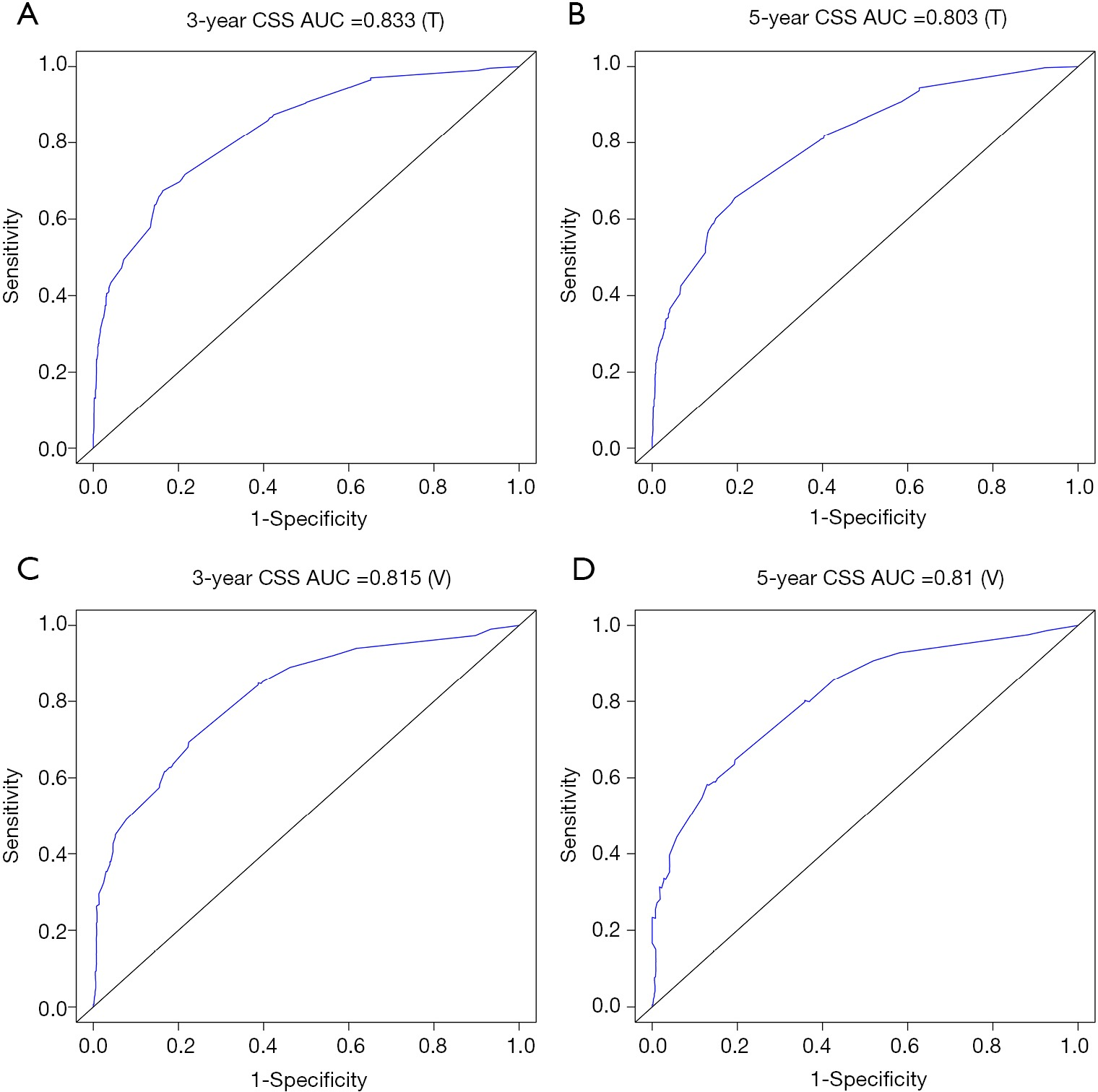 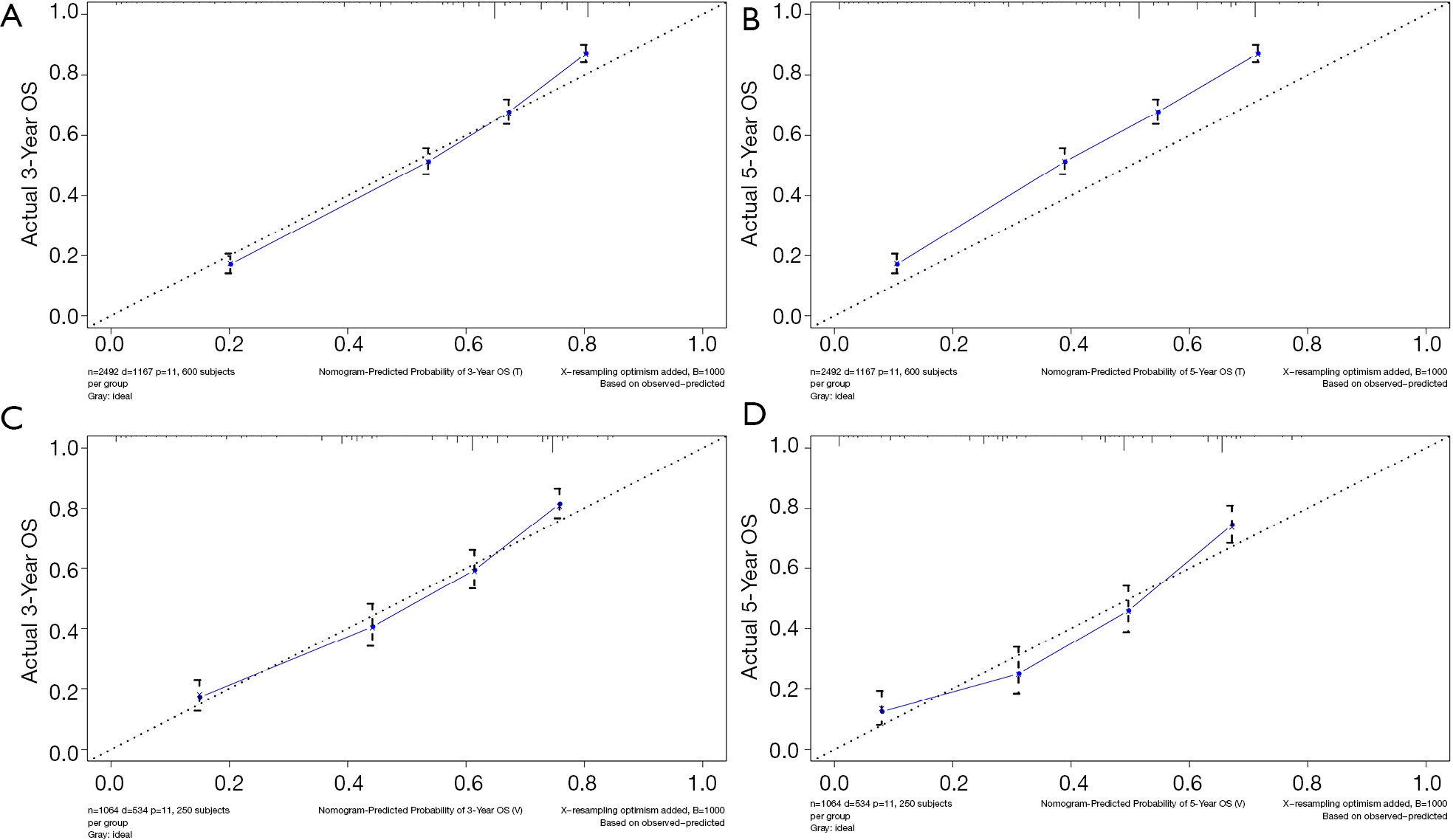 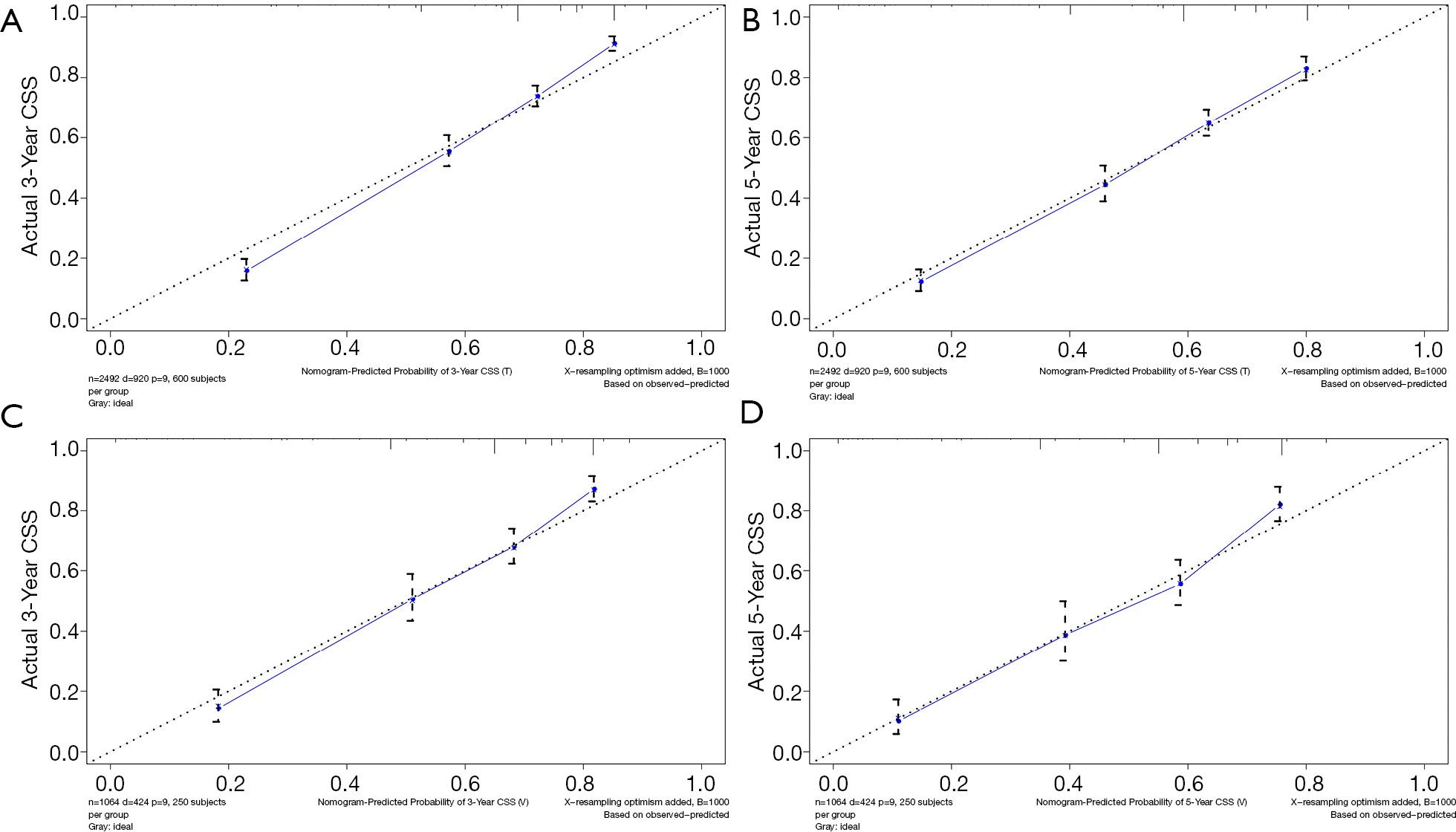 Urothelial carcinomas were the fourth most common tumor in the world, consisting of tumor from the lower (bladder and urethra) or the upper (renal collecting tubes, calyces and pelvis) urinary tract (4). UTUC accounted for only 5–10% of all urothelial malignancies, with an estimated annual incidence of 1–2 cases per 100,000 (1). Due to the combination of improved endoscopic techniques and improved bladder cancer survival, the occurrence rate of UTUC seemed to be rising in the last decades. As mentioned above, 60% of UTUCs were invasive (2) and UTUCs usually had a very poor prognosis when the tumor invaded the muscle wall. Currently, the 5yr specific survival was less than 50% for pT2/pT3 diseases and less than 10% for pT4 diseases (3). However, the low prevalence of UTUC and the relative preponderance of UBC leaded limited studies exploring the independent prognostic factors of UTUC. It was of great significance to determine the potential prognostic factors in order to improve the prognosis of patients with UTUC. Nomograms have its advantage in predicting the survival risk by combining and quantifying the importance of various prognostic factors, thus being comprehensively applied in clinical oncology assessment.

Our study demonstrated that age, TNM stage, use of surgery/radiotherapy and marital status were independent prognostic factors for OS. Moreover, age, TNM stage, use of surgery/radiotherapy was closely associated with CSS. Nomogram were established on account of these prognostic factors to predict OS and CSS for 3 and 5 years in patients with UTUCs postoperatively. In the validation cohort, the nomograms showed good discrimination performance.

According to the study from Raman et al. (13), the mean age of patients who was diagnosed as UTUC over the last three decades were from 68 to 73 years, and there were few patients who was diagnosed as UTUC before 40 years old. Therefore, patients below 40 years old were excluded in our study in order to eliminate the population bias. Consistent with the studies from Shariat et al. and Chromecki et al. (14,15), we confirmed that elderly patients had lower CSS and OS. This finding could be attributed to the different biologic potential of the tumor, which UTUCs become more aggressive in elderly patients.

In our study, patients with higher TNM grades had lower OS and CSS. Various studies have also shown that endoscopic evaluation and biopsy grade can predict the prognosis of patients with UTUC (16-18). However, unlike bladder urothelial carcinoma, the clinical staging of UTUC was much more difficult due to the thinness of the muscularis, so that biopsies that included underlying muscle were difficult to obtain. Therefore, except for the assessment of large extension or the presence of metastasis, imaging had poor predictive value and the result of biopsy grade should be evaluated with great consciousness (19). In conclusion, although clinical UTUC tumor staging might be unreliable, TNM grading could provide a fundamentally important parameters that predicts the recurrence and survival.

Our research was based on the population-based database (SEER database), which can perfectly solve the problem of the low prevalence rate of UTUC. However, cases in this study were from retrospective cohorts, therefore more prospective, randomized clinical trials should be conducted to further explore the efficacy of this model. In conclusion, several independent prognostic factors were identified for both OS and CSS of patients with UTUC in our study. Furthermore, a nomogram prognostic assessment model for the patients with UTUC was established by integrating these independent prognostic factors, providing surgeons an effective tool to assess individualized survival rates of patients with UTUC.

Conflicts of Interest: All authors have completed the ICMJE uniform disclosure form (available at http://dx.doi.org/10.21037/tau.2020.03.28). XL serves as an unpaid Section Editor of Translational Andrology and Urology from Oct 2019 to Dec 2021. The other authors have no other conflicts of interest to declare.

Ethical Statement: The authors are accountable for all aspects of the work in ensuring that questions related to the accuracy or integrity of any part of the work are appropriately investigated and resolved. This study was exempt by Institutional Review Board (IRB) approval because the original data were from a public database.