Variability in surgical management of kidney cancer between urban and rural hospitals in Queensland, Australia: a population-based analysis

The kidney is the ninth most common site of primary cancer in Australia, and incidence is increasing (1); age-standardised incidence rates have risen from 6.2 per 100,000 in 1982, to 12.4 per 100,000 in 2017 (2). Most kidney cancers are managed surgically, through resection of all (radical nephrectomy) or part (partial nephrectomy) of the cancer-affected kidney. Although these procedures have similar oncological outcomes (3,4), partial nephrectomy is recommended by international guidelines when technically feasible, due to perceived benefits with respect to nephron preservation leading to better postoperative kidney function (5,6).

The aim of this study was to explore associations between patient- and hospital-level characteristics and the likelihood of undergoing partial nephrectomy in Queensland, with particular focus on how geographical factors affected the type of surgical management.

All 3,799 patients diagnosed with kidney cancer between January 2009 and December 2014 in Queensland (Australia) were identified using the Queensland Cancer Registry. Reporting cancer incidence to state-based registries is a legal requirement in Australia, therefore ascertainment of all cases is likely close to complete. Patients who were aged <18 yrs (n=47), did not receive surgery (n=988), or had end-stage kidney disease (ESKD) before surgery (n=17) were excluded. Patients who had ESKD before surgery were identified using administrative data linked to international classification of disease-10 codes, per our previous study (18). The final sample included 2,747 patients.

Data were extracted from the Queensland Cancer Registry on the 14th of September 2017, and linked to electronic hospital admission and discharge data as previously described (18). American Society of Anesthesiologists (ASA) classification was recorded at the time of surgery, and linked to cancer registry data from hospital records, before being provided to investigators. ASA classification was grouped as 1–2 and ≥3. Urban/rural place of residence and hospital location were assigned based on the Accessibility/Remoteness Index of Australia (19), and grouped as major city, inner regional, and rural (outer regional/remote/very remote). Patients were evaluated by area-level socioeconomic status, grouped by tertiles (disadvantaged/middle/advantaged) based on the Australian Socioeconomic Indexes for Areas (Index of Relative Socioeconomic Disadvantage) (20). Patient-level socioeconomic status and urban/rural status were determined from the postcode of the patient’s usual place of residence recorded in the cancer registry, and provided in the data extract. Hospital location was also assigned based on postcode. Hospital volume was reported as the average number of cases/yr, estimated by dividing the total number of oncological nephrectomies performed during the study period at each centre by the length of the study period (6 yrs).

The main outcome was whether a patient was managed with partial nephrectomy. Multivariable logistic regression was used to evaluate whether various patient- and hospital-level characteristics affected the likelihood of undergoing partial nephrectomy. Models were adjusted only for potential confounders, identified using directed acyclic graphs. When adjusting for health-service characteristics, clustering by hospital code was accounted for using robust sandwich estimators. Analysis was performed using Stata 14.0 (StataCorp, College Station, TX, USA).

To evaluate the geographical distribution of kidney cancer cases in Queensland, cases that were managed surgically during the study period were grouped by geographical region (Statistical Area Level 2—Australian Bureau of Statistics), with rates standardised to the 2011 population of each area. This was visualised with a heat map generated using Microsoft Excel (Microsoft Corporation, Albuquerque, NM, USA). Geographical boundaries were imported from the Australian Bureau of Statistics data cube “Statistical Area Level 2 (SA2) ASGS Ed 2016 Digital Boundaries in ESRI Shapefile Format” (http://www.abs.gov.au/AUSSTATS/abs@.nsf/DetailsPage/1270.0.55.001July%202011). A map showing hospitals in Queensland that performed a nephrectomy during the study period was produced using Google Maps.

Characteristics of the study population are presented in Table 1. Of 2,747 included patients, 637 were managed with partial nephrectomy (25%). The cohort was predominantly male (65%), and the median age was 62 yrs. 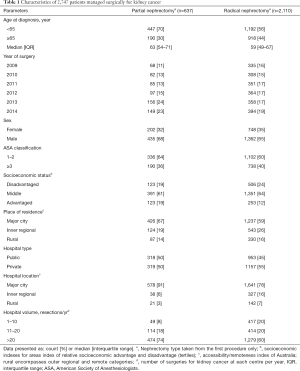 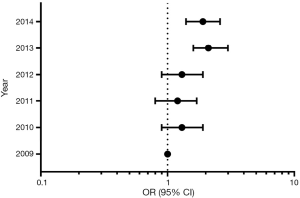 Characteristics of patients compared by hospital location are presented in Table 3. Changes in the number/proportion of partial nephrectomies performed over time compared by hospital location is presented in Figure 2. The number of cases performed at outer regional hospitals more than doubled between 2009 and 2014, and the proportion of partial nephrectomies increased from <1% to 21% over the same period. 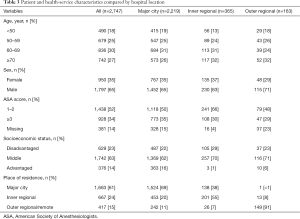 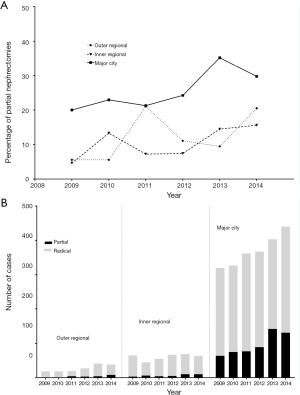 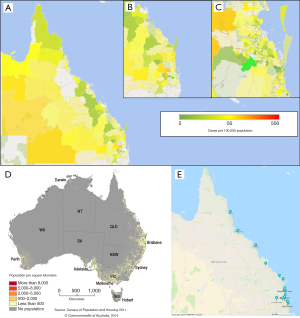 There are many reasons why management at rural and smaller-volume hospitals may lead to a lower likelihood of undergoing partial nephrectomy, which could relate to inequality of resource allocation, as well as staffing and infrastructural limitations (21). As partial nephrectomy is generally more technically-difficult than radical nephrectomy, and this difficulty can be compounded by both tumour factors (e.g., size and location relative to vessels and collecting system) and patient factors (e.g., comorbidities and functional status), it is conceivable that medically complex cases were referred to a tertiary centre located in a major city. This is likely to have driven down the percentage of partial nephrectomies performed in regional centres. Although data on tumour factors were not available, the fact that most patients who underwent partial nephrectomy in a rural setting had an ASA score of 1–2 supports the assertion that complex cases were likely to have been referred to larger centres. Despite the fact that partial nephrectomy was generally less likely to be performed in rural hospitals, over time, the number of nephrectomies performed in rural settings has increased, as has the proportion of rural patients who were managed with partial nephrectomy. This reflects global trends favouring nephron-sparing procedures, and indicates that practice is evolving in rural centres, in line with international consensus.

In most regions of Australia, the majority of the population lives within 500 km of the capital city of a state or territory. Queensland is the exception, where multiple population centres fall outside this 500 km radius (Figure 3D). This population distribution introduces unique challenges for the public health system, and several factors need to be considered for policy development. These include considerations related to the provision of quality health services that are close to patient’s place of residence, minimising transfer and accommodation costs, and optimising the quality of health service delivery in regional areas. In terms of kidney cancer surgery in Queensland, these considerations taken together tend to indicate that centralisation is likely not cost-efficient; this is in contrast with states like Victoria, where centralisation of care may be a feasible and cost-effective option, due to the relative proximity of the majority of the population to the state’s capital city (Melbourne). Accordingly, the authors advocate for health service policy and delivery models that support regional surgeons.

There were some notable differences in patient characteristics compared between the hospital locations: ASA score, socioeconomic status, and place of residence varied substantially between hospital location. Both socioeconomic status and place of residence are likely attributable to geographical factors, where patients living in rural areas were more likely to be managed at rural hospitals, and areas that are lower socioeconomic status are disproportionately more likely to also be in rural locations (22). The differences in distribution of ASA score are likely to reflect the fact that complex patients were more likely to be managed at tertiary referral centres, which are located in metropolitan areas. This is despite the fact that patients from rural areas tend to have poorer baseline health, higher rates of obesity, and higher incidence of chronic conditions (23).

In this study, 25% of patients managed surgically for kidney cancer between January 2009 and December 2014 underwent partial nephrectomy. This was comparable to other states in Australia, but lower than other countries such as Canada and the United States (Figure 4) (8,15,16,20,29,30). For example, based on data from the American Board of Urology certification/recertification logs, 39% of patients managed surgically for kidney cancer underwent partial nephrectomy between November 2009 and November 2014 (8). This may reflect a lower tendency for surgeons to perform partial nephrectomy over radical nephrectomy in Queensland. This is consistent with survey data from a recently published study including 32 Queensland urologists, where 77% agreed that partial nephrectomy was the treatment of choice for T1a renal cell carcinoma (24). The authors of the study speculated that this could have been due to the lack of high-quality evidence favouring partial over radical nephrectomy in international evidence-based guidelines (24).

Strengths of this study include its large sample size and population-based sampling strategy. The major limitation was that characteristics of the tumour were not available, as the tumour size, stage and location is likely to confound the association between hospital location/volume and type of surgery performed. It is also possible that the proportion of higher-stage tumours varies between rural and urban areas, due to differences in healthcare access.

Conflict of Interest: All authors have completed the ICMJE uniform disclosure form (available at http://dx.doi.org/10.21037/tau-19-775). The authors have no conflicts of interest to declare.

Ethical Statement: The authors are accountable for all aspects of the work in ensuring that questions related to the accuracy or integrity of any part of the work are appropriately investigated and resolved. Human research ethics approval for this study was obtained from the University of Queensland (2017001010). An application to access patient data without consent was granted under the Queensland Public Health Act (RD007218). All aspects of this study were conducted in accordance with the Declaration of Helsinki.