Chronic pelvic pain syndrome (CPPS) is considered a regular urological disorder (1). The incidence is stated to be about 15% (2). There are several symptoms of CPPS, such as erectile dysfunction (ED) and pain in the prostate, perineal, and suprapubic regions, which may last for more than three months (3). The patients usually suffer from a lot of pain and restrictions, which are like those after a heart attack, angina pectoris, and Crohn’s disease (4).

There are currently no causal or standardized therapeutic approaches to CPPS. Anti-inflammatory agents, analgesics, antibiotics, α-receptor blockers, and 5α-reductase inhibitors are reported to be used separately or in combination (5,6), but there is no convincing evidence to demonstrate the efficacy of each treatment type. Consequently, non-drug treatment options have received increased attention. Low-intensity extracorporeal shock wave therapy [low-intensity extracorporeal shock wave therapy (LI-ESWT)] has so far been used to treat musculoskeletal disorders (7), male ED (8), non-healing wounds (9), and myocardial infarction (10). This study will focus on evaluating the effectiveness and safety of LI-ESWT on patients with CPPS.

Patients with CPPS refractory to the traditional 3-As therapy (antibiotics, alpha-blockers, and anti-inflammatories) were enrolled from Beijing Jishuitan Hospital between May 2018 and July 2019. Participants gave informed consent before the study. The local ethics committee approved the study. The study inclusion and exclusion criteria are seen in Table 1.

The patients received LI-ESWT treatment once a week for four weeks in an outpatient setting without local or systemic anesthesia. At each therapy session, 3,000 impulses were applied on the perineum at 6 different anatomical sites, with a total energy flow density of 0.25 mJ/mm2, 3 Hz. After every 500 pulses, the location of the shock wave transducer was changed to virtually scan the entire area of the prostate and pelvic floor. In the supine position, LI-ESWT was performed. The duration of treatment for each participant was 18 min. An electro-pneumatic shock wave unit with a shock wave source (MASTERPULS, MP100, Storz Medical, Tägerwilen, Switzerland) was used for this study.

The grade of pain was measured using a Visual Analog Scale (VAS, 0–10). Validated questionnaires [specific complaints with the NIH chronic Prostatitis Symptom Index (CPSI)] were used to investigate the CPPS-related complaints. The follow-up assessments were carried out at 1, 2, 4, and 12 weeks after the first LI-ESWT session. Any adverse effects associated with LI-ESWT were recorded during the follow-up (Figure 1).

Thirty-two patients were included, with a mean age of 36±13 years. The mean CPPS history was 33 months (range, 6–36 months). After four weeks of a course of treatment, all of the patients took the pain VAS and the NIH-CPSI, and both were significantly reduced (P<0.05; Table 2).

For each domain, the NIH-CPSI has been evaluated as shown above. The score of pain domain, as well as the total score, showed significant improvement at week 4, and the treatment effect could be preserved until week 12 (P<0.05).

Compared with baseline parameters such as NIH-CPSI total score and VAS, the NIH-CPSI total score and VAS showed significant improvement at weeks 4 and 12, and the highest change was reached at week 4. Meanwhile, the other parameters showed the maximum effect at 4 weeks but a slight deterioration at week 12. No significant side effects were observed, and it is unnecessary for any type of analgesia during the whole course of treatment.

There are only hypothetical models for the pathogenesis of CPPS so far. The pathophysiology of CPPS has not yet been explained. The manifestations of CPPS often comprise a myofascial pain syndrome, an abnormal tone of the periprostatic musculature, an increasingly visible neurological component, and dysfunctional effects (11,12). There were many complaints associated with the autonomous nervous system and the interplay between smooth and cross-striated muscles. Acute and chronic inflammations involved sympathetic endplate, which may result in the endogenous generation of pain via nociceptive nerve endings and receptors. Furthermore, some psychological stress may result in abnormal electromyographic activity and myofascial pain syndromes (13). Therefore, it is feasible to use myofascial trigger points, cognitive behavioral therapy, and biofeedback and relaxation training to treat those disorders associated with CPPS (14).

Low-intensity extracorporeal shock waves, as a kind of electro-pneumatic shock wave, were transformed into biochemical signals in a process named mechanotransduction, which may hyperstimulate nociceptors and interrupt the former pain memory nerve impulses to achieve ‘reprogramming’ (15). Furthermore, cavitation bubbles will be generated and popped, which may regenerate secondary energy waves called microjets that lead to additional mechanical forces, increase local microvascularity (16), reduce pain, and help to heal tissue (17).

LI-ESWT has effects on the periprostatic pelvic floor muscles. Consequently, local muscle relaxation may result in the disorder improving due to a reduction in functional muscle shortening (18). This mechanism showed the short-term effect of the shock waves, since the pain sensation may be prevented relatively transiently without enduring modulation in the sensitivity of the treatment area. In the present study, according to the follow-up of 12 weeks, the VAS and NIH-CPPS were significantly improved, the pain intensity associated with CPPS was reduced by about half, the maximum alleviation was at 4 weeks after the first treatment session, and the pain slightly increased at 12 weeks after LI-ESWT. However, the therapeutic effect was still significant. As expected, the patients’ symptoms were improved via pain reduction by LI-ESWT, which was still valid over several weeks. In our research, the length of follow-up was limited to 12 weeks (16,19-22). The longer-term effect of LI-ESWT may involve some other mechanisms. In previous studies, LI-ESWT induced cell membrane modifications and functional changes and conducted a series of cell signaling and biological activation processes, such as cell proliferation, angiogenesis, peripheral nerve regeneration, increased cell permeability, and anti-inflammation (23,24).

It is noted that limited studies on LI-ESWT have reported the improvement of CPPS (16,19-22,25-27). In the current investigation, studies reported since 2008 were reviewed and are listed in Table 3. Zimmermann et al. first reported using LI-ESWT for the treatment of CPPS in 2008 (19). Five included trials were randomized controlled trials with sham therapy (16,20,21,25,26). However, most of the included trials had small samples. The largest sample included in these reviews was only 41 patients (27). In most of the studies, follow-up was restricted to 12 weeks, while in some studies it was as long as 24 weeks. The long-term effect of LI-ESWT is still equivocal (25-27). According to the literature review in Table 3, both of the cohort and randomized controlled studies revealed statistically significant improvements in NIH-CPSI, QOL, and the pain domain scores after LIESWT in short-term follow-up (16,19-22,25-27). 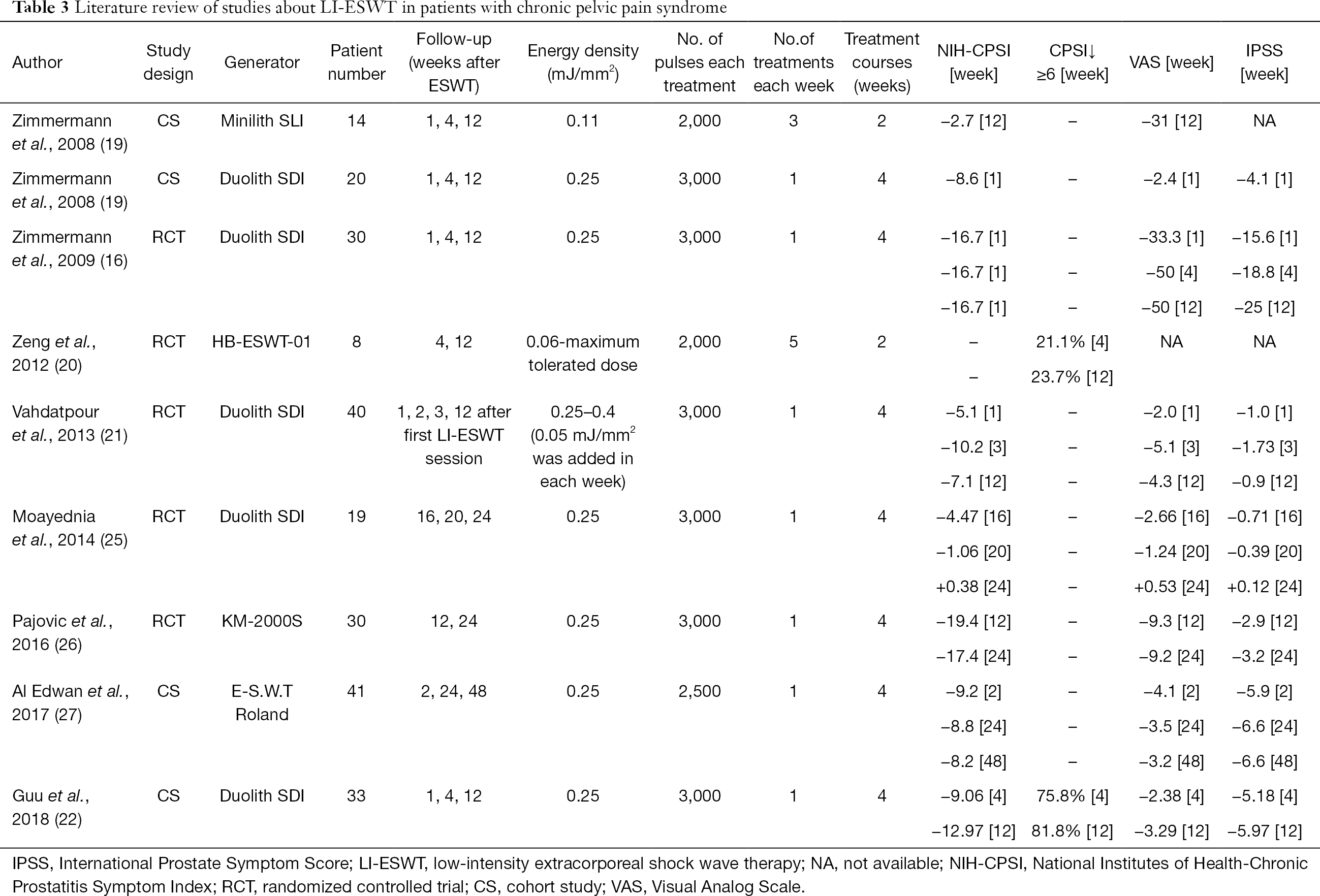 The weakness of our study was that it employed an open-label clinical trial lacking a controlled group and a small sample size. In our study, the number of shock waves and the energy level were decided empirically. Furthermore, as discussed above, the term of follow-up was only 12 weeks. The number of treatments, the treatment intervals, and the number of pulses per session was calculated from previous clinical application trials, so it is uncertain which formulation should be used in the treatment protocol. The present mechanisms cannot explain the longer-term effect of LI-ESWT. Compared with week 1, there was some deterioration in total NIH-CPSI, pain, the urinary scores, and QoL at week 24 of follow-up in some studies (25-27).

The strength of our study was that all of our included patients did not achieve satisfactory results from all other traditional modalities of treatments such as combined alpha-blockers, simple analgesia, and antibiotics. There were no significant side-effects during or after treatment, and it is convenient for the patients to undergo an out-patient treatment. However, it is still necessary to define a sufficient therapeutic protocol such as energy density, probe location, pulse numbers, and session numbers, and to determine crucial predict factors regarding successful response to LI-ESWT in patients with CPPS.

In conclusion, LI-ESWT may be considered necessary for CPPS treatment, since it is convenient to apply without side effects. For the first time, it is possible to employ LI-ESWT to provide a rapid and thrifty outpatient therapeutic option for CPPS by using a standard unit as well as a treatment which was time-saving and can be repeated as demanded. A double-blind placebo-controlled study, including a sham treatment and an extended follow-up, is expected for further evaluation of this method.

Funding: This work was supported by the Beijing Municipal Science & Technology Commission No. Z171100001017133.

Conflicts of Interest: Both authors have completed the ICMJE uniform disclosure form (available at http://dx.doi.org/10.21037/tau.2020.04.07). Both authors report grants from Beijing Municipal Science & Technology Commission, during the conduct of the study.

Ethical Statement: The authors are accountable for all aspects of the work in ensuring that questions related to the accuracy or integrity of any part of the work are appropriately investigated and resolved. The local ethics committee approved the study (No. 201901-07). Participants gave informed consent before the study.