Bladder cancer is one of the most common types of cancer and is a prominent cause of cancer-related deaths all over the world (1). Bladder cancer is more likely to affect older people and men (2), and along with the growing and ageing global population, the number of cancer-related deaths has dramatically increased, which in part can be attributed to its recurrence rate of up to 75% (1,3).

Due to international differences in the incidence and mortality of bladder cancer, the burden of bladder cancer is becoming more noticeable (4,5). Necessary data to inform health policies with respect to urologic cancer at a global level, including cancer control and implementation plans, are not widely available. This study therefore aims to describe the global burden of urologic cancer from 1990 to 2016 according to age, sex, region, and sociodemographic index (SDI) (a summary indicator of income per capita, educational attainment, and fertility), and then forecast worldwide bladder cancer incidence and mortality rates for the next 15 years. Understanding these factors is critical for providing detailed information on bladder cancer etiologies and their trends over time, without which targeted prevention strategies are impossible to design and evaluate, and for promoting strategic investments into research and clinical resources.

Methodology and research processes for the Global Burden of Disease (GBD) Study have been reported previously in many publications (6-11). Herein, we present methods for the incidence, mortality, trends, and 15-year prediction of bladder cancer from 1990 to 2030 based on the data collected from the GBD study. Our study complies with the Guidelines for Accurate and Transparent Health Estimates Reporting (GATHER) and the detailed methodology also complies with the GATHER guidelines (12). Tables, which can be found in the Supplementary materials (Tables S1-S9), record the estimation steps and other detailed information about the methodology (7,13-15). The International Classification of Diseases 10 (ICD-10) codes corresponding to bladder cancer incidence and mortality are C67-C67.9, Z12.6-Z12.79, Z80.52, Z85.51 and C67-C67.9, D09.0, D30.3, D41.4-D41.8, D49.4, respectively. 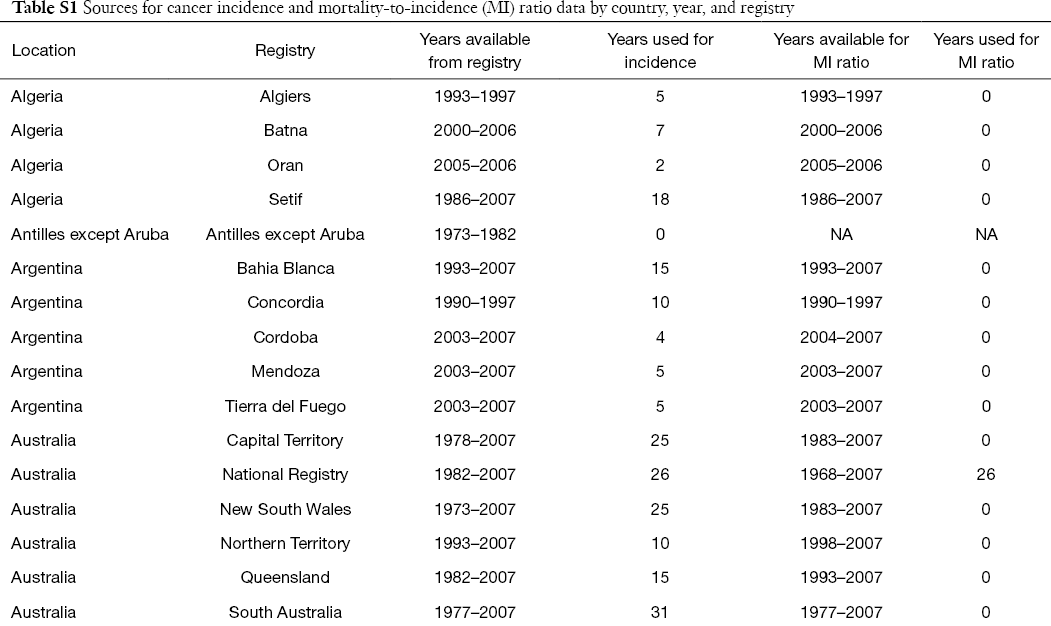 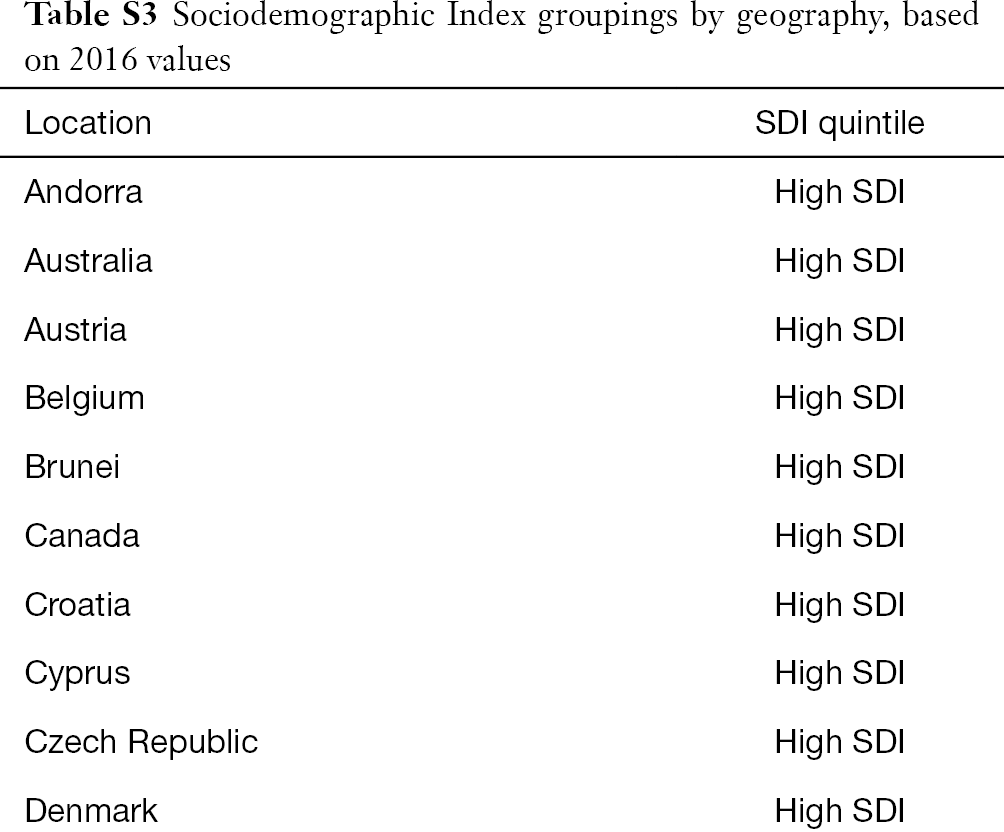 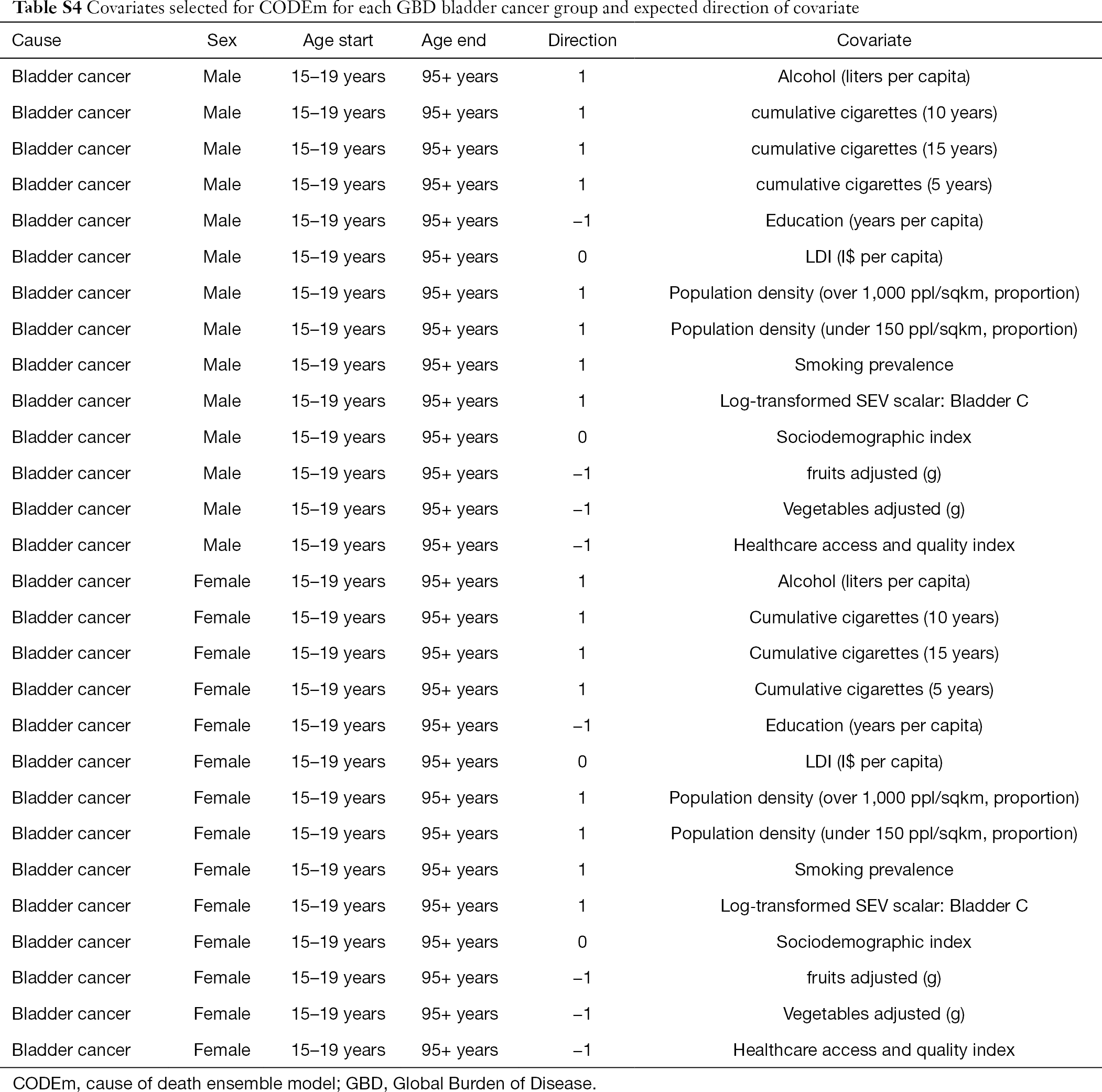 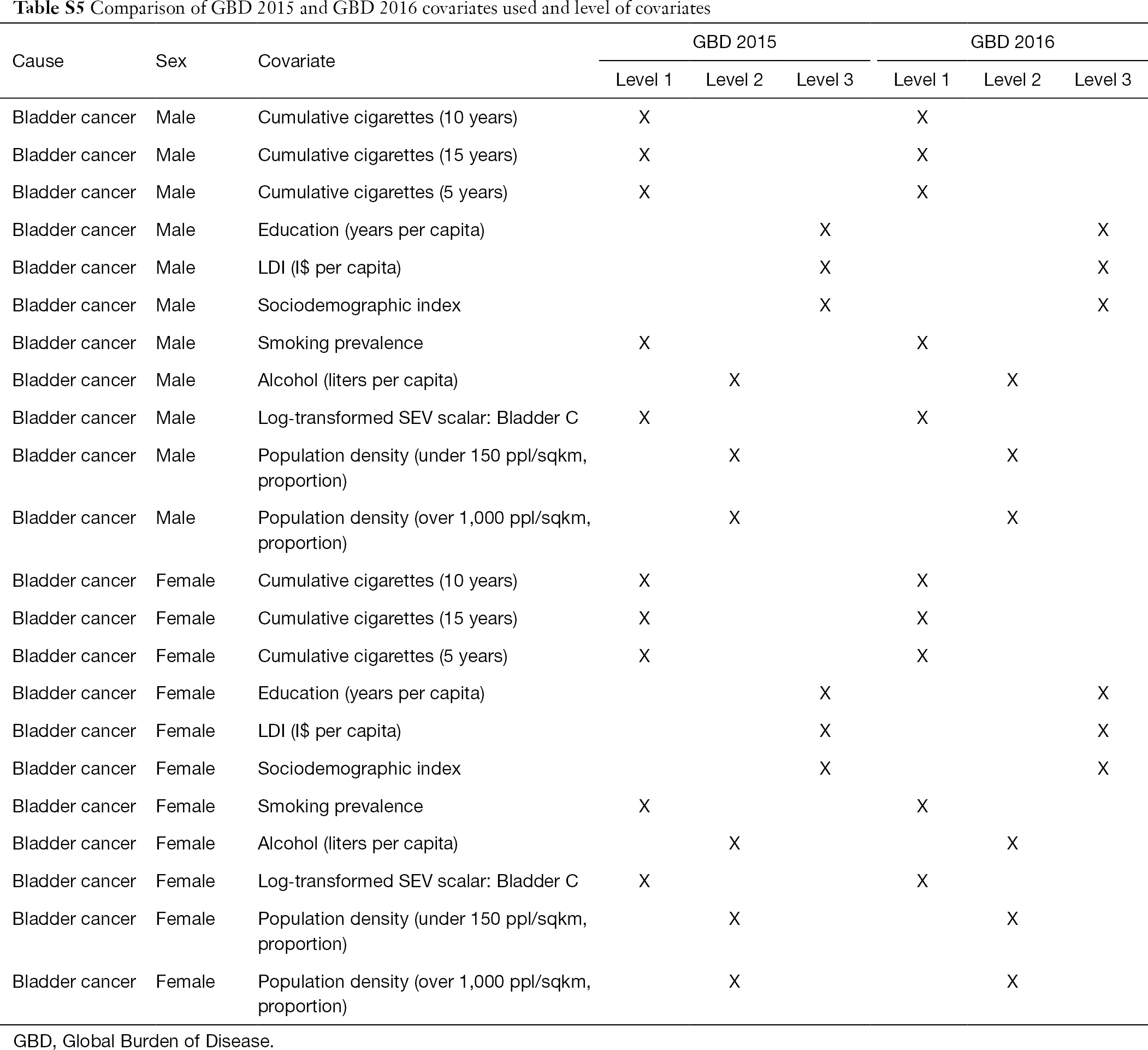 Table S7 Percent change before and after Cod Correct by bladder cancer for all ages, both sexes combined, 2016
Full table

Table S9 Decomposition analysis of bladder cancer incidence trends at the global and regional levels, and by SDI quintiles, both sexes, 2006 to 2016
Full table

The GBD estimation process starts with cancer mortality. Data sources for bladder cancer mortality include vital registration systems and cancer registries. Cancer incidence data are used to model mortality in places where without cancer mortality data by multiplying incidence by a separately modelled mortality-to incidence ratio. These mortality estimates are used in a cause of death ensemble model (CODEm) (7,11). Each cancer type is estimated separately using covariates with a causal connection. Cancer incidence is estimated by dividing final cancer-specific mortality estimates by the mortality-to-incidence ratio. We also estimated the contributions of population ageing, population growth, and the change in age-specific rates on the change of incident cases between 2006 and 2016, which are available in the Supplementary materials (6).

Table 2 Global and regional age-standardized bladder cancer incidence and death rates with 95% uncertainty interval and percent change by geography, gender, and SDI between 1990 and 2016
Full table 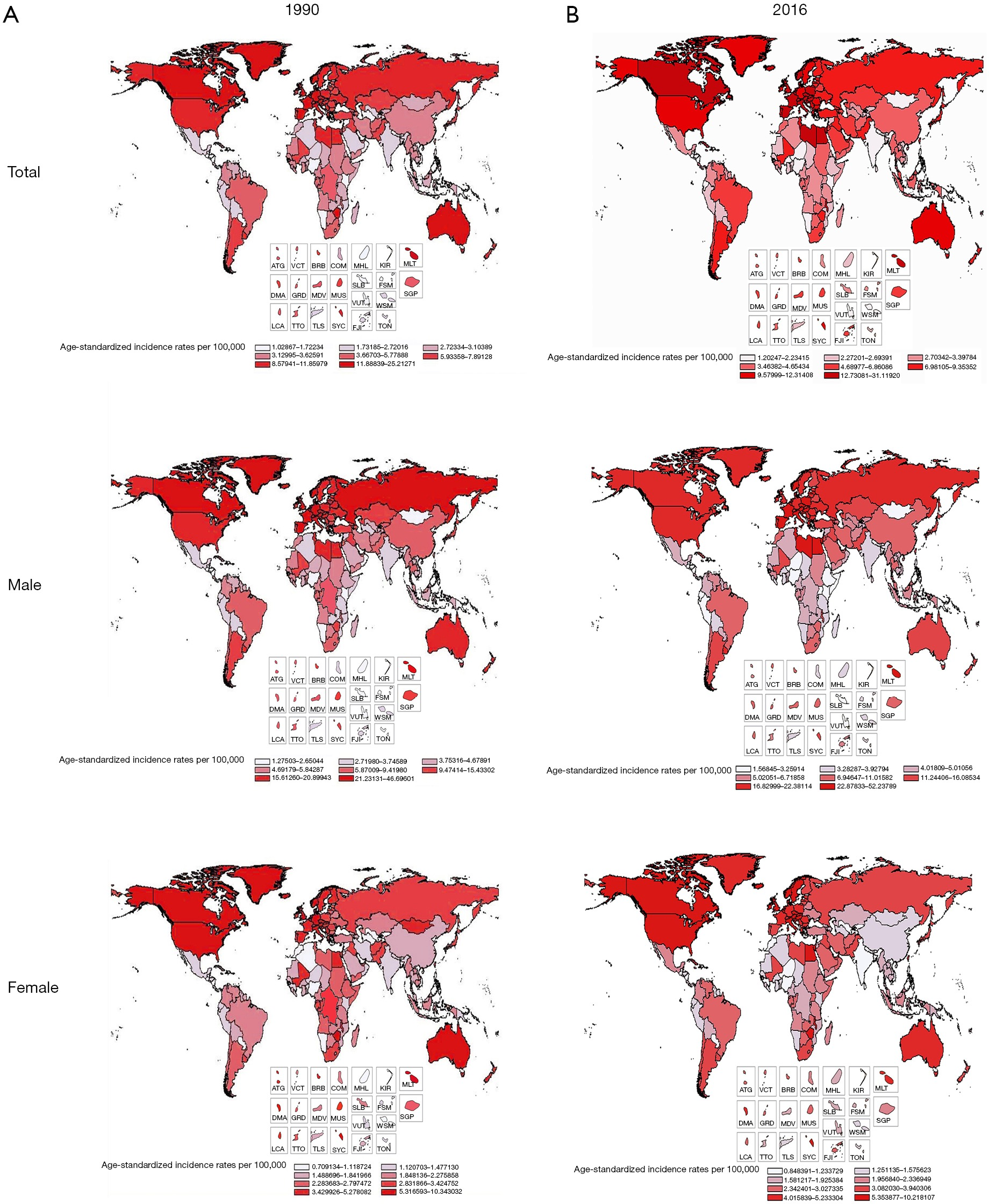 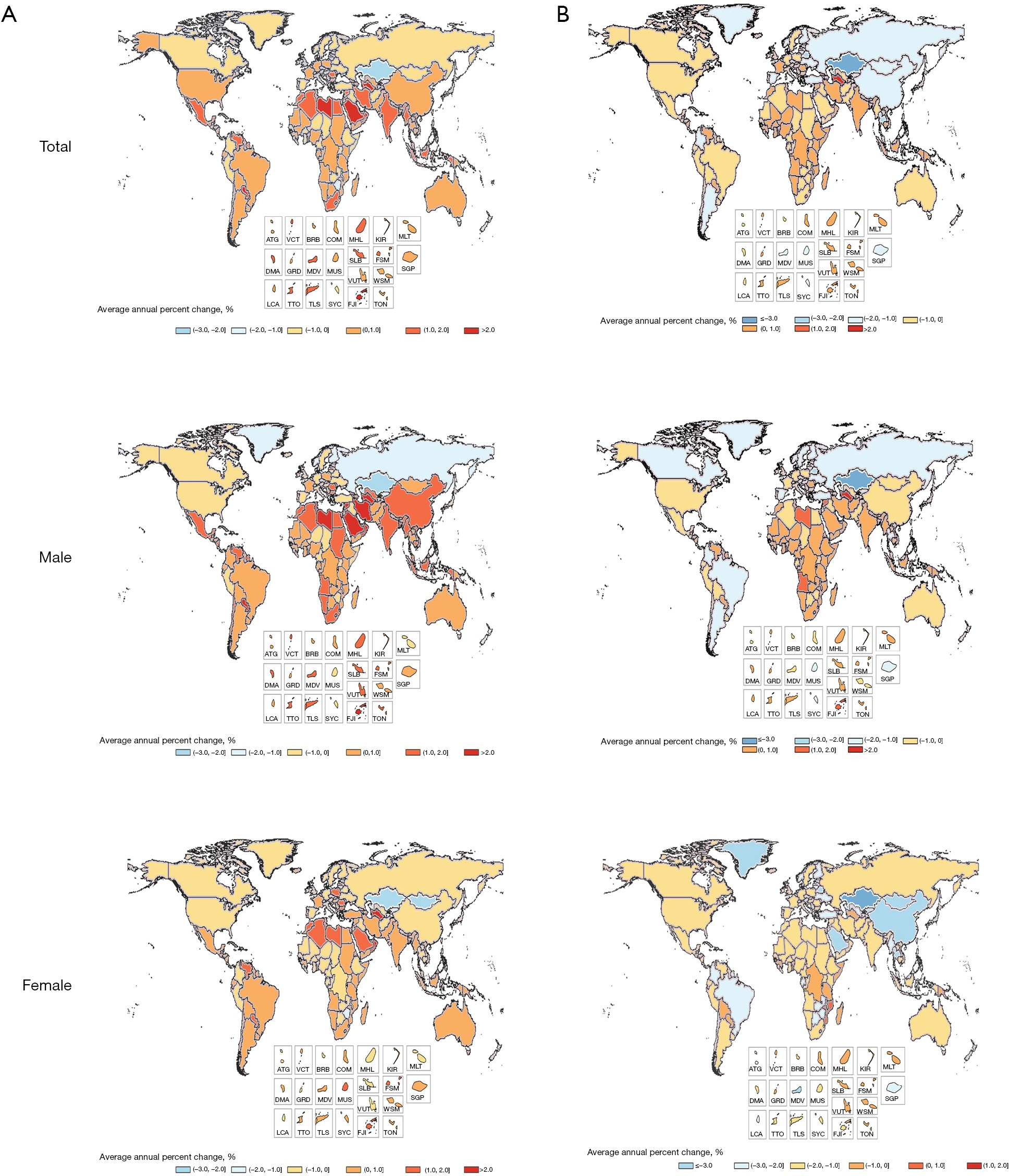 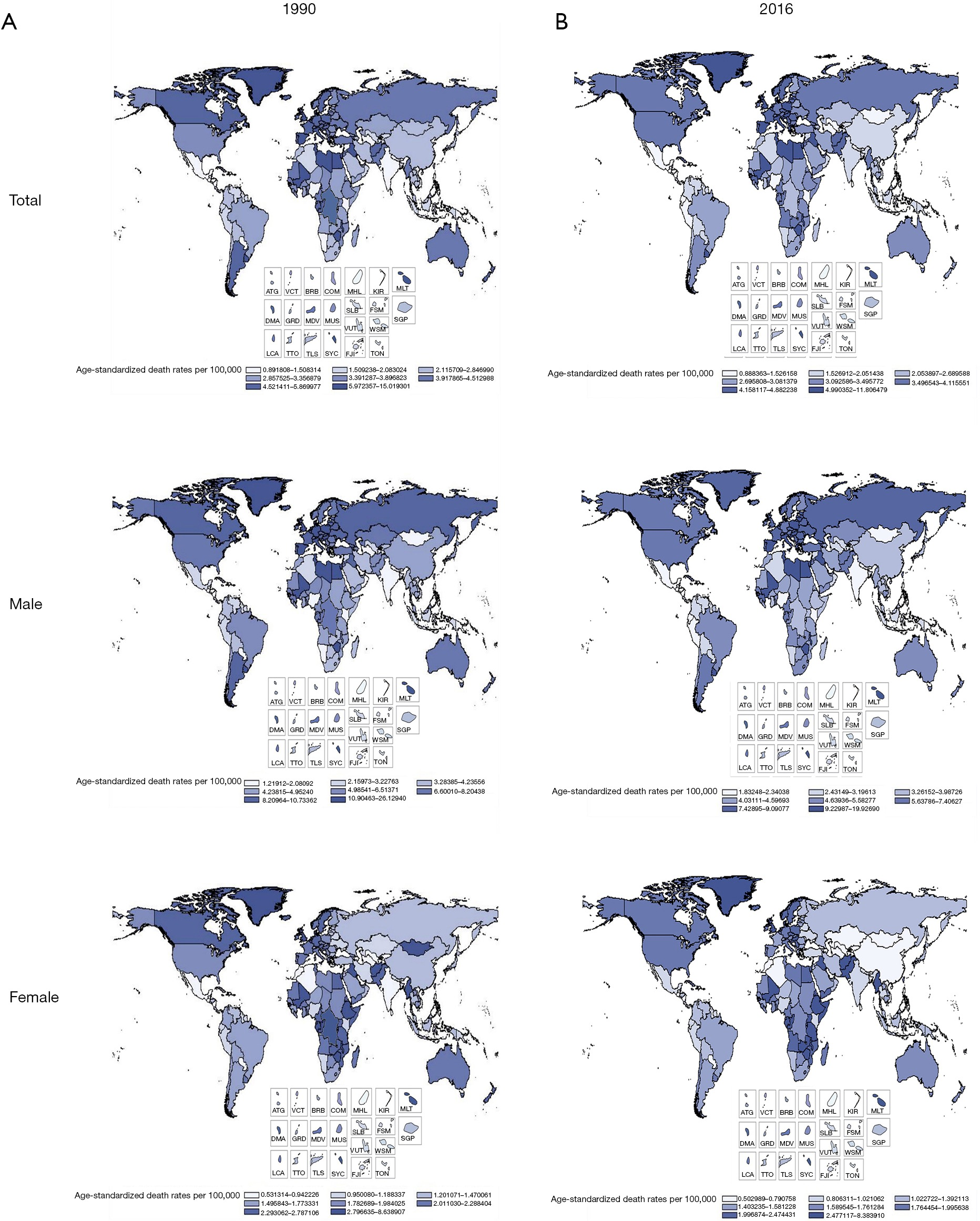 Projections of bladder cancer incidence and mortality from 2017 to 2030 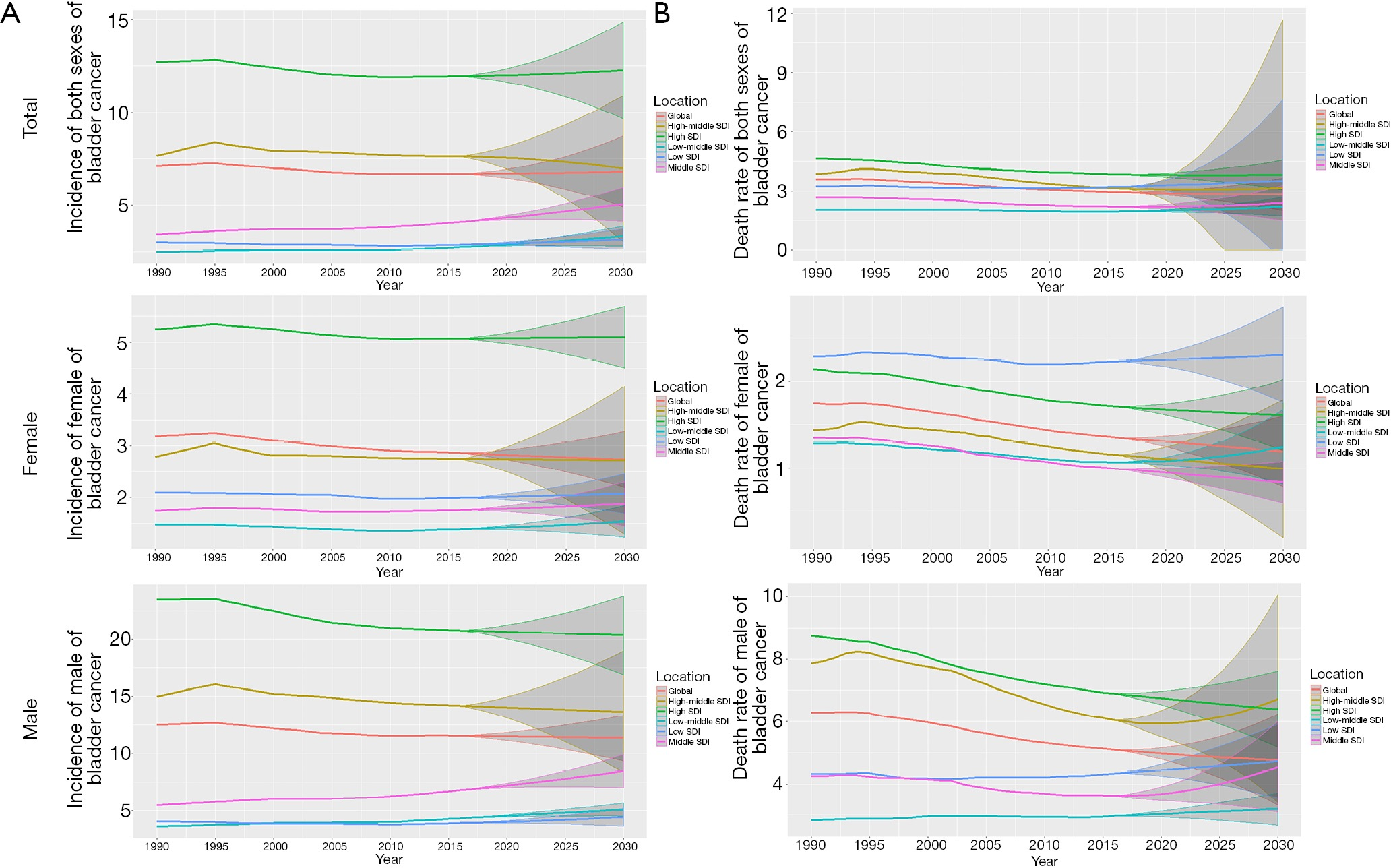 Conflicts of Interest: All authors have completed the ICMJE uniform disclosure form (available at http://dx.doi.org/10.21037/tau.2020.02.24). The authors have no conflicts of interest to declare.