Comparison of intrarenal pelvic pressure and postoperative fever between standard- and mini-tract percutaneous nephrolithotomy: a systematic review and meta-analysis of randomized controlled trials

Currently, percutaneous nephrolithotomy (PCNL) has been an established procedure primarily used to treat urinary calculi greater than 2 cm due its higher stone clearance and cost-effectiveness when compared to other alternative procedures such as extracorporeal shock wave lithotripsy (ESWL) and retrograde intrarenal surgery (RIRS) (1). Recently, modifications of standard PCNL (SPCNL) technique, namely minimally invasive PCNL (MPCNL), have been proposed by some experts as alternatives to decrease the operation-related complications through smaller renal access sheaths, such as micro-PCNL (4.5 Fr outer sheath), ultra-MPCNL (7.5 Fr nephroscope and 11–13 Fr outer sheath), and super-MPCNL (7.5 Fr nephroscope and modified 10–14 Fr outer sheath) (2). These improved techniques are also known as “mini perc” or “mini-PCNL”.

Our latest meta-analysis (3) comparing MPCNL to SPCNL showed that MPCNL has the advantage of less bleeding, fewer transfusion and higher stone-free rate (SFR) but the disadvantage of a longer time to dislodge stones. Besides, there was no significant difference between the two groups for renal stones ≥2 cm in terms of SFR. However, we did not assess the effect of intrarenal pelvic pressure (IPP) on surgical safety. It is common for urologists to pressurize the irrigation to provide a clear field of view and facilitate removal of the calculi fragments (4). Unfortunately, poor drainage of irrigation may provisionally increase IPP, and this may cause systemic absorption of bacteria and endotoxins from the irrigation ﬂuid, further triggering postoperative fever (POF) and sepsis (4,5). In this situation, a systematic review and meta-analysis of existing controlled studies was conducted to explore this relationship between MPCNL and SPCNL.

Eligible randomized controlled trials (RCTs) were identified from electronic databases including PubMed, the Cochrane Library, Embase, Web of Science and WANFANG up to November 2019 in accordance with the PRISMA guidelines (6) with no limitation to the language. Additionally, the manual searches of the reference lists of all related articles were supplemented to broaden the search. The following keywords or Mesh terms were searched in title/abstract: “pelvic pressure” and “percutaneous nephrolithotomy”. All trials reporting the outcomes of interest were included. A statement of ethics approval and patient inform consent was not required because all studies included in this article was derived from published records online.

The eligibility of studies was defined using the PICOS method: Patients (P): kidney stone; Intervention (I): PCNL; Comparison (C): publications comparing MPCNL to SPCNL; Outcomes (O): the primary outcomes were IPP, POF, procalcitonin and white blood cell; the secondary outcomes were SFR, operation time and bleeding; Study design (S): RCTs. The present meta-analysis only reported IPP, POF, SFR and operation time, because only a few studies described bleeding, procalcitonin and white blood cell so that we are unable to conduct a meta-analysis. 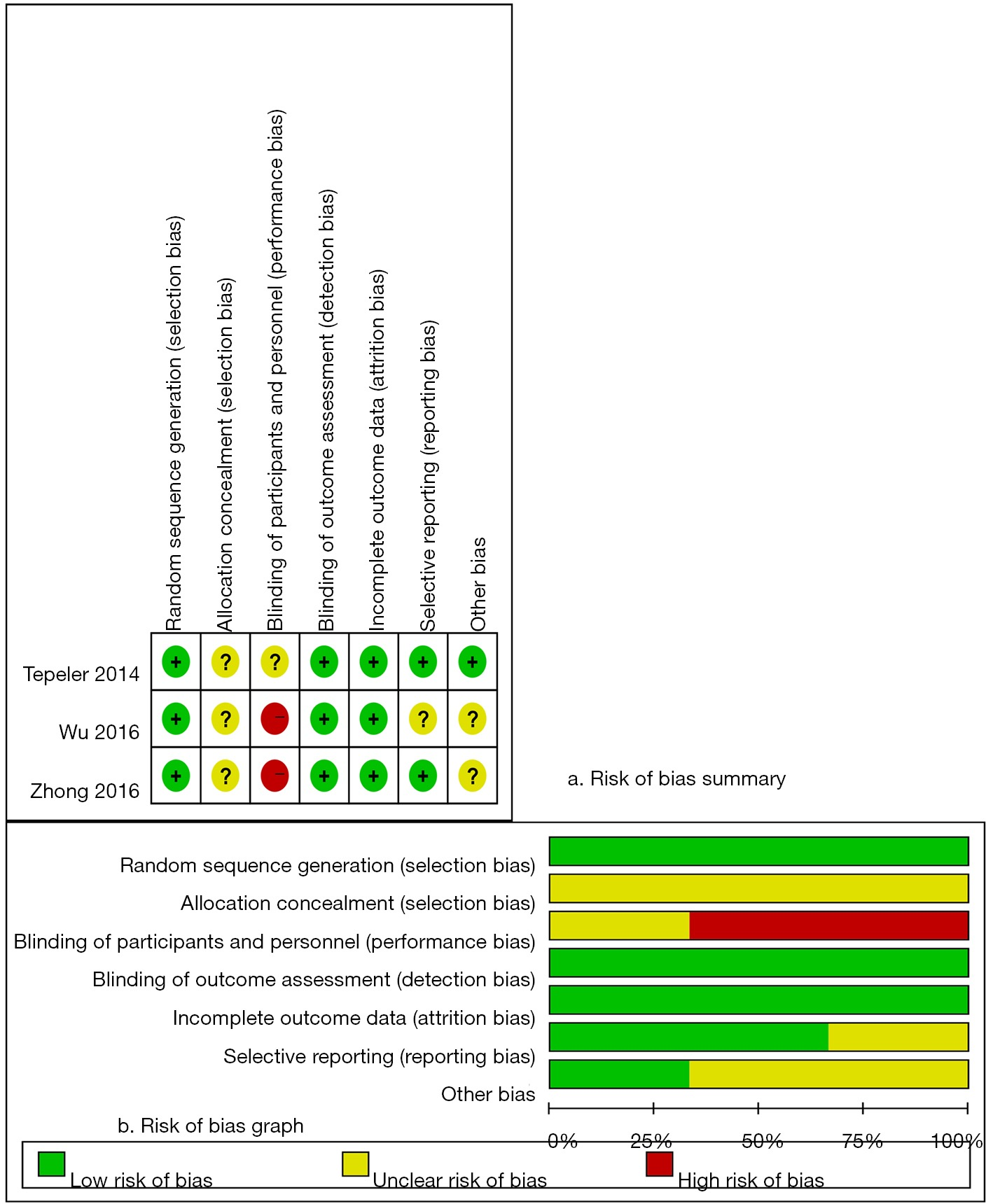 The continuous and dichotomous variables were described as means ± standard deviation (SD) and proportions, respectively. Median and range were used to estimate mean and SD (7). The percentiles, 25th and 75th percentiles as well as 5th and 95th percentiles, were transformed to SD through the following formula: SD ≈ Norm IQR = (P75 − P25) ×0.7413 (IQR: inter-quartile range, P75: 75th percentile, P25: 25th percentile) (8). We calculated pooled estimates of the mean difference (MD) or standard mean differences (SMD) and odds ratio (OR) for continuous and dichotomous variables, respectively. We used the Cochran Q test to evaluate between-study heterogeneity (9). We also did I2 testing to assess the magnitude of the heterogeneity with values ≤50% regarded as being acceptable heterogeneity (10). The fixed effects model was used unless there exists heterogeneity (P<0.1), and significance was set at P<0.05. This meta-analysis was accomplished by RevMan5 (version 5.3).

We identified 95 possible studies and three trials (11-13) reporting the outcomes of interest were included in the final analysis after duplicates removed, titles and abstracts screened and full-text articles assessed. The three trials (11-13) contained 331 patients (167 in the MPCNL and 164 in the SPCNL), and the number of males was 199. The study selection process is shown in Figure 2, and Table 1 details the main characteristics of included studies. 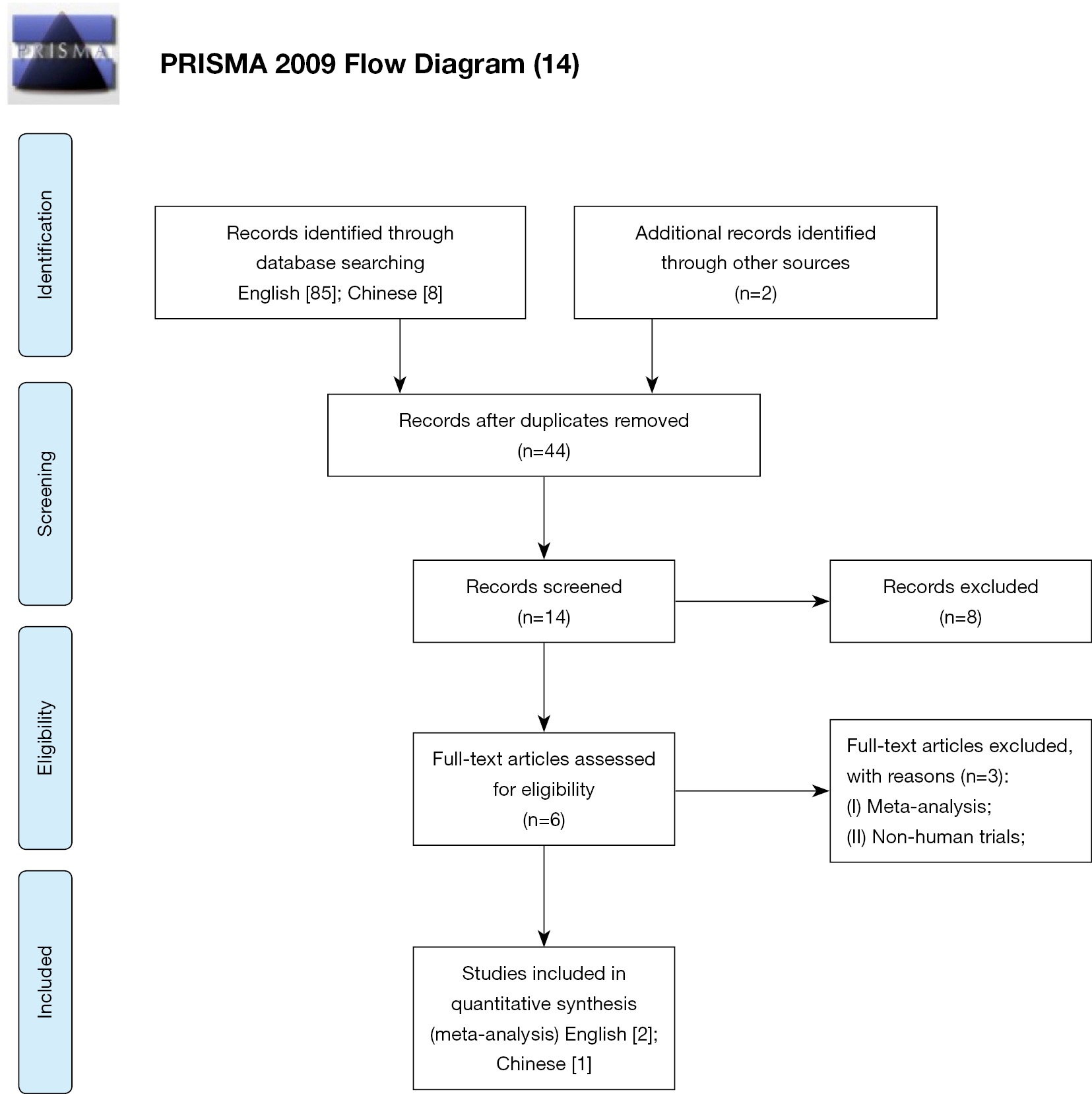 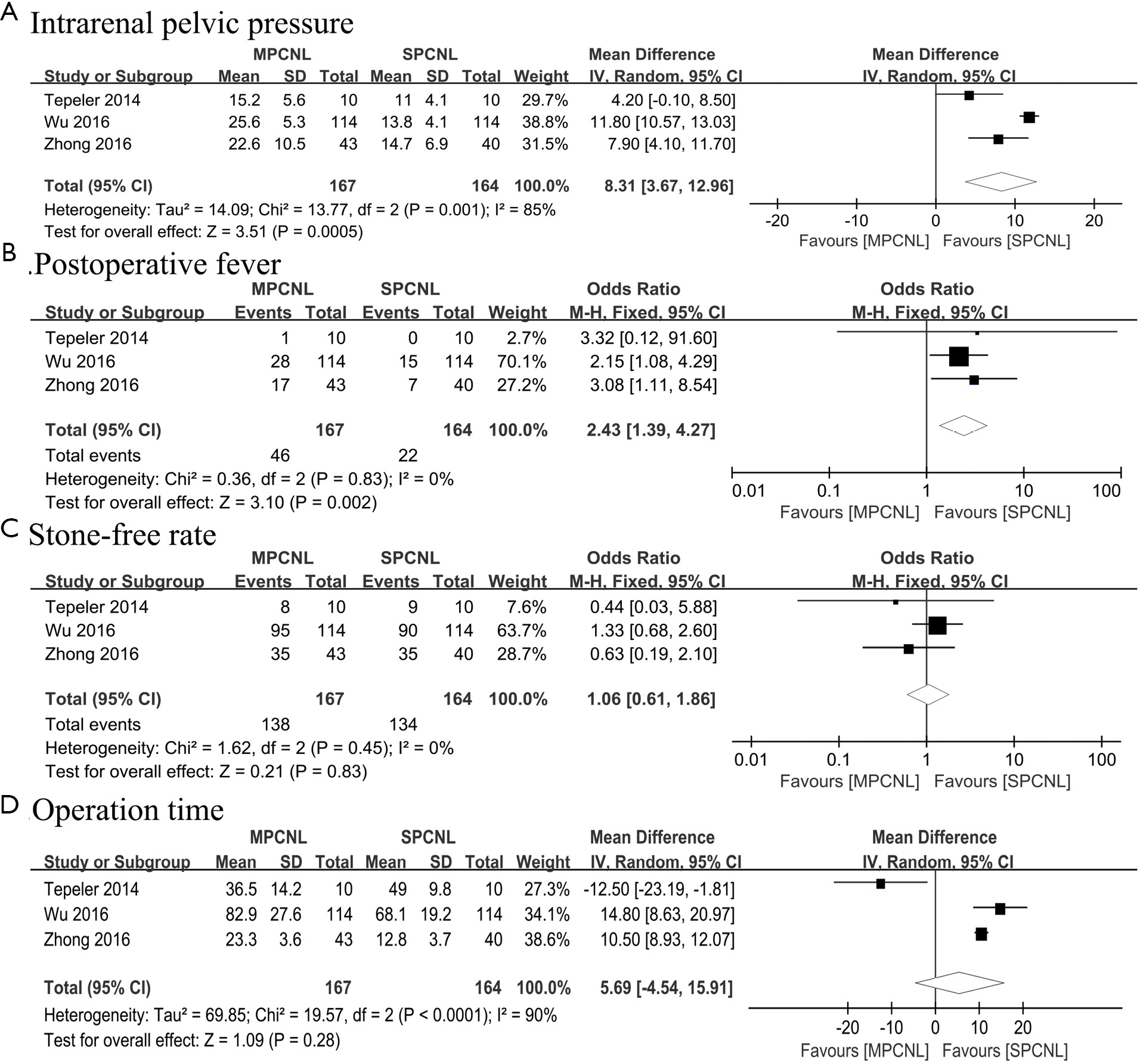 Kidney stone is a common urinary disease, and the goal of treatment is to remove the stone as much as possible and protect the renal function. At the present, PCNL has been the most extensively used procedure for the treatment of renal stone larger than 2 cm (1). The first PCNL technique was described by Fernstrom and Johansson in 1976 (16). This procedure removed calculus from the renal collecting system through percutaneous access tracts with a nephoscopy or ureteroscope (4,16). Owing to the large trauma to renal parenchyma and severe complications like bleeding, Jackman et al. (17) firstly introduced the “miniperc” technique in children in 1998 and Lahme and colleagues (18) shared their experience of mini-PCNL with a 12-French rigid nephroscope and 15-French Amplatz sheath firstly in adults in 2001. Subsequently, the improvements continued over the past decades with the introduction of micro-PCNL (19), ultra-MPCNL (20) and super MPCNL (21) techniques. Technically speaking, MPCNL has a smaller percutaneous tract and a smaller field of vision compared to SPCNL. Additionally, MPCNL requires special equipment and is more difficult to operate. However, this was not the case. MPCNL sacrifices its technical advantages to achieve higher surgical results. Specifically, MPCNL has advantage of decreased trauma to renal parenchyma, less pain, less bleeding and shorter length of stay than SPCNL which has been demonstrated by the previous meta-analysis (3). Elevated IPP might be attributed to incomplete positioning of the nephroscopy sheath within the collecting system and endoscopy through a narrow infundibulum (22). Moreover, Zhong and his colleagues (4) found that smaller tract contributes to higher IPP and POF rate by comparing IPP of different percutaneous tracts (14- to 18-French). The possible mechanisms of increased IPP induced by MPCNL may be attributable to the following aspects. Firstly, irrigation outflow principally goes through the interspace between scope and peel-away sheath, and little was passed through the ureter (4). Consequently, smaller tracts are prone to cause poor drainage of irrigation outflow from the interspace between endoscope and peel-away sheath. Secondly, we use the impulsive stream with high pressure produced by microcomputer control pump to prompt removal of the calculi fragments, and we continuously pressurize the irrigation to provide a clear field of view for the urologists throughout the period of MPCNL (4). Besides, the complexity of operation may also contribute to the elevation of IPP. High renal pelvic pressure results in systemic absorption of irrigation fluid containing bacteria or endotoxins, which induces POF (4,5). Although the previous meta-analysis (3) indicated that MPCNL was a safe and effective alternative to SPCNL, IPP should not be ignored during PCNL. Currently, little was known about IPP and its association with POF between MPCNL and SPCNL. Thus, the emphasis of this meta-analysis lies in comparison of IPP and POF between MPCNL and SPCNL.

Similar to the previous meta-analysis (3), our study showed no significant difference in SFR between MPCNL and SPCNL in terms of renal stones ≥2 cm. Therefore, our study confirms the efficacy of MPCNL. Notably, IPP generally remains lower than the backflow level (30 mmHg) during MPCNL via a 14- to 18-French percutaneous tract (4). Any factors that caused poor drainage would result in temporarily elevated IPP greater than 30 mmHg, and many such occurrences of high pressure would have an accumulating effect, which means enough backflow to cause bacteremia and POF (4). Specifically, the threshold of accumulated time of IPP greater than 30 mmHg may be 50 s (4). Besides, there was also no significant difference in operation time between the two groups, which was different from the previous study (3). However, due to the limited RCTs and great heterogeneity, we are unable to make definitive conclusions.

To our knowledge, our study is the first meta-analysis that compares IPP and POF between MPCNL and SPCNL. However, our present study does have the following limitations. Foremost, the broad heterogeneity in study populations, designs and definitions of outcome measures. Secondly, we are unable to perform a meta-analysis on hematology-related infection indicators such as procalcitonin and white blood cell due to limited RCTs and unavailable data, despite these indicators seemed to be higher in MPCNL group (11,13). Thirdly, the limited number of RCTs and sample size make our conclusions unstable and unreliable.

Although MPCNL has been established to be an alternative to SPCNL, it is unlikely to completely replace SPCNL due to the limited sheath diameter. MPCNL represents an extension of the indication for SPCNL that it can replace in no way, and smaller tracts do not mean better effects. Too small tract might not provide enough interspace between the scope and pee-away sheath for irrigation outflow, and thereby increase IPP causing POF and even sepsis. We should pay attention to the cumulative effect of IPP during MPCNL. Besides, the relationship between percutaneous tract and the number, size, type and components of stone remains the focus of research in the future.

Current evidence indicates that MPCNL is an effective alternative to SPCNL with comparable SFR. IPP and POF is significantly higher during MPCNL compared to SPCNL. Intraoperative detection of IPP is of great significance for ensuring safety and reducing postoperative complications, especially for patients with MPCNL and the duration of stone fragmentation. Further large well-designed trials are warranted to confirm our findings.

Funding: The study was supported by the 1.3.5 project for disciplines of excellence, West China Hospital, Sichuan University (ZY2016104) and Pillar Program from Department of Science and Technology of Sichuan Province (2018SZ0219).

Conflicts of Interest: All authors have completed the ICMJE uniform disclosure form (available at http://dx.doi.org/10.21037/tau.2020.03.30). The authors have no conflicts of interest to declare.