Radical prostatectomy (RP) remains the most commonly used first-line treatment option for patients with clinically localized prostate cancer and a life expectancy of at least 10 years (1). Since RP provides excellent long-term results in terms of cancer-specific and overall survival, an increased focus should lie on the most common adverse effects which negatively affect patients’ quality of life: erectile dysfunction and urinary incontinence (2,3). Rates of functional outcome (erectile function and urinary continence) after RP vary widely depending on multiple factors including study design, patient age, preoperative erectile status, definition of functional outcome, and comorbidities (4,5).

Recovery of erectile function after RP is especially of increasing importance due to a shift towards earlier stage and younger age at diagnosis (6,7). Therefore, surgeons use nerve-sparing operation techniques for neurovascular bundle preservation which is the major predictor of erectile function recovery (8,9). Montorsi et al. first introduced the idea of penile rehabilitation with intracavernosal injections (ICIs) of alprostadil in 1997 (10). Several clinical studies about penile rehabilitation followed, mainly focusing on common erectile aids e.g., oral phosphodiesterase type 5 inhibitors (PDE5-I), ICI therapy, intraurethral alprostadil [Medicated Urethral System for Erection (MUSE®)] therapy, and vacuum erection devices (VED) (11,12). For men who fail these more conservative strategies, inflatable penile prosthesis implantation might be a definitive ED treatment (13) with an excellent cost-effectiveness (14). The basic idea of the aforementioned more conservative strategies of penile rehabilitation is prevention of hypoxia in the penile tissue related to cavernous nerve neuropraxia after RP which leads to fibrosis and atrophy of the corporal smooth muscle cells (15). Iacono et al. showed that 2 months after RP, elastic fibers and smooth muscle cells were already significantly decreased whereas collagen content was significantly increased (16). These tissue alterations cause subsequent veno-occlusive dysfunction and consequently reduce the chance of long-term recovery of erectile function. Capogrosso et al. showed recently that, despite the advancements in surgical and post-RP care, erectile function outcomes after RP have not improved over the last 10 years. The authors claimed further strategies to improve recovery of erectile function (17).

Data of patients who underwent nsRP between 11/2013 and 03/2016 at our institution was analyzed. All patients with neo- or adjuvant therapy and patients with preoperative erectile dysfunction [defined as IIEF-EF <22 (23) and EHS <3 (24)] were excluded. All data [preoperative (0), 6, 12, 24, and 36 months after nsRP] was collected prospectively. Written informed consent was obtained from all patients. The study was approved by the ethical review committee of the Technical University of Munich.

Follow-up data was collected by mail 6, 12, 24 and 36 months after surgery using standardized, self-administrated questionnaires. To determine recovery of erectile function, two validated, standardized questionnaires (IIEF-EF and EHS) were analyzed. Similar to previous studies (28-30), we used an IIEF-EF cut-off of ≥17 to define recovery of erectile function. Rigidity of the penis was analyzed using the EHS and erectile function was defined as EHS ≥3. Frequency of morning erections was assessed by the question “How often did you have morning erections (including incomplete erections) in the past 4 weeks?”. Recovery of erectile function was defined as the occurrence of morning erections at least occasionally (occasionally; often/mostly; almost ever/ever). Urinary continence was evaluated by the number of used pads, their condition after 24 h (dry; moist; wet) and defined as the use of a maximum of one dry safety pad per 24 h. Besides parameters of the functional outcome, we additionally assessed use of erectile aids (PDE5-I, ICI, MUSE®, VED) and masturbation behavior during follow-up. 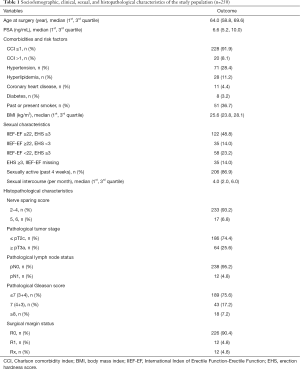 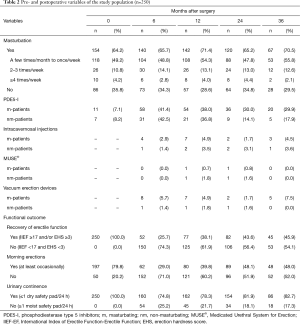 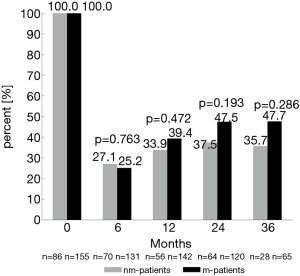 Figure 1 Postoperative rates of moderate to good erectile function (IIEF ≥17 and/or EHS ≥3) in nm- and m-patients. 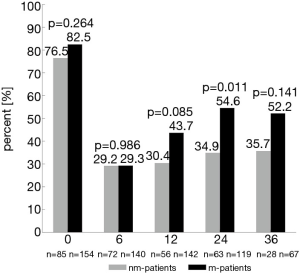 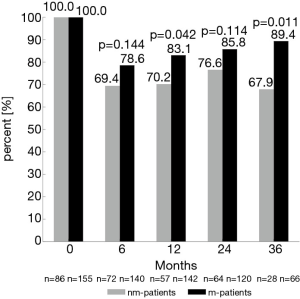 While previous studies assessed erectile function after nsRP using the IIEF-EF, we used both the IIEF-EF and the EHS. Since the IIEF-EF is not applicable to patients without sexual intercourse, by additionally using the EHS we could therefore include almost a third more preoperatively potent men in our analysis. Overall, the rates of erectile function among our patients were 38.1% and 43.6% after 12 and 24 months, respectively. These rates appear to be low compared to potency rates in a systematic review and meta-analysis by Ficarra et al. ranging between 47% and 94% 24 months after nsRP (4). However, it should be noted that most of these studies included only highly-selected young patients with low-risk prostate cancer whereas the median age of our patients was 64.0 years and almost a quarter were either not organ-confined (≥ pT3a) or had a pathological Gleason score ≥7 (3+4), thus representing a more heterogeneous sample. Compared to other large prospective studies with similarly heterogeneous samples concerning age, comorbidities, and tumor stage, our rates of erectile function were similar or even slightly higher (17,31).

Funding: This work was supported by the German Research Foundation (DFG) and the Technical University of Munich within the funding program Open Access Publishing.

Conflicts of Interest: All authors have completed the ICMJE uniform disclosure form (available at http://dx.doi.org/10.21037/tau.2020.03.19). The authors have no conflicts of interest to declare.

Ethical Statement: The authors are accountable for all aspects of the work in ensuring that questions related to the accuracy or integrity of any part of the work are appropriately investigated and resolved. The study was approved by the ethical review committee of the Technical University of Munich. Written informed consent was obtained from all patients.