Identification of miR-21-5p and miR-210-3p serum levels as biomarkers for patients with papillary renal cell carcinoma: a multicenter analysis

Accounting for about 3% of adult malignancies, renal cell carcinoma (RCC) is the most common neoplasm of the adult kidney (1). Additionally, it bears a comparably high mortality rate of up to 40%, which stresses the clinical importance of this entity (2). Papillary renal cell carcinoma (pRCC) accounts for 15–20% of all RCCs and represents a heterogeneous disease regarding disease progression, therapy response and patient outcome (3-5). To more accurately stratify aggressive disease from indolent tumours, Delahunt and Eble proposed a morphological subtyping of pRCCs in 1997 into two subgroups: first, there is type 1 pRCC, which is often found multifocal, holding small cuboid cells arranged into layers and a predominantly indolent clinical course; on the contrary, there is type 2 pRCC, with voluminous eosinophilic cells in pseudostratification patterns and a more aggressive clinical behaviour (6). This subclassification pattern and its prognostic value was confirmed in various clinical studies (7).

Unfortunately, besides morphological characterization, there have been no investigations whether serum biomarkers might be useful to detect and/or distinguish pRCC and its subtypes from other malign entities of the kidney. MiRNAs are predestined for this particular task: their expression profiles not only allow distinguishing malignant and non-malignant tissue, but also different tumor entities (8). MiRNAs are circulating in a cell-free form in blood (9-11), very likely in exosomes which protect them against RNase degradation (9,11). MiRNA-signatures in blood are similar in men and women, as well as individuals of different age (10). Furthermore, miRNA expression levels are comparable both in plasma and serum, and are not disturbed by repeated freeze/thaw cycles as well as by prolonged storage at room temperature (11).

So far, circulating miRNAs have not been investigated in patients with pRCC regarding their potential diagnostic (compared to healthy controls) or discriminative (regarding the two subtypes) implications. Several groups analysed miRNA-expression in pRCC tissue specimen with conflicting results (12-14). We therefore designed our study to identify and validate potential miRNA serum-candidates in a multicenter setting.

This study was approved by the local human research ethics committees of the three participating medical centres (Charité Berlin: No. EA1/134/12, University of Bonn: No. 036/08, University of Würzburg: No. 136/08) and was conducted according to the standards set by the declaration of Helsinki; all patients provided written informed consent before being enrolled.

We collected preoperative serum samples of n=67 patients suffering from pRCC, divided into n=34 pRCC type 1 and n=33 pRCC type 2 cases who consecutively underwent surgery at the participating centers between 2008–2014. The clinical and pathological patient characteristics are shown in Table 1. Sera of healthy subjects (n=33) not suffering from urological or other malignancies were used as controls. 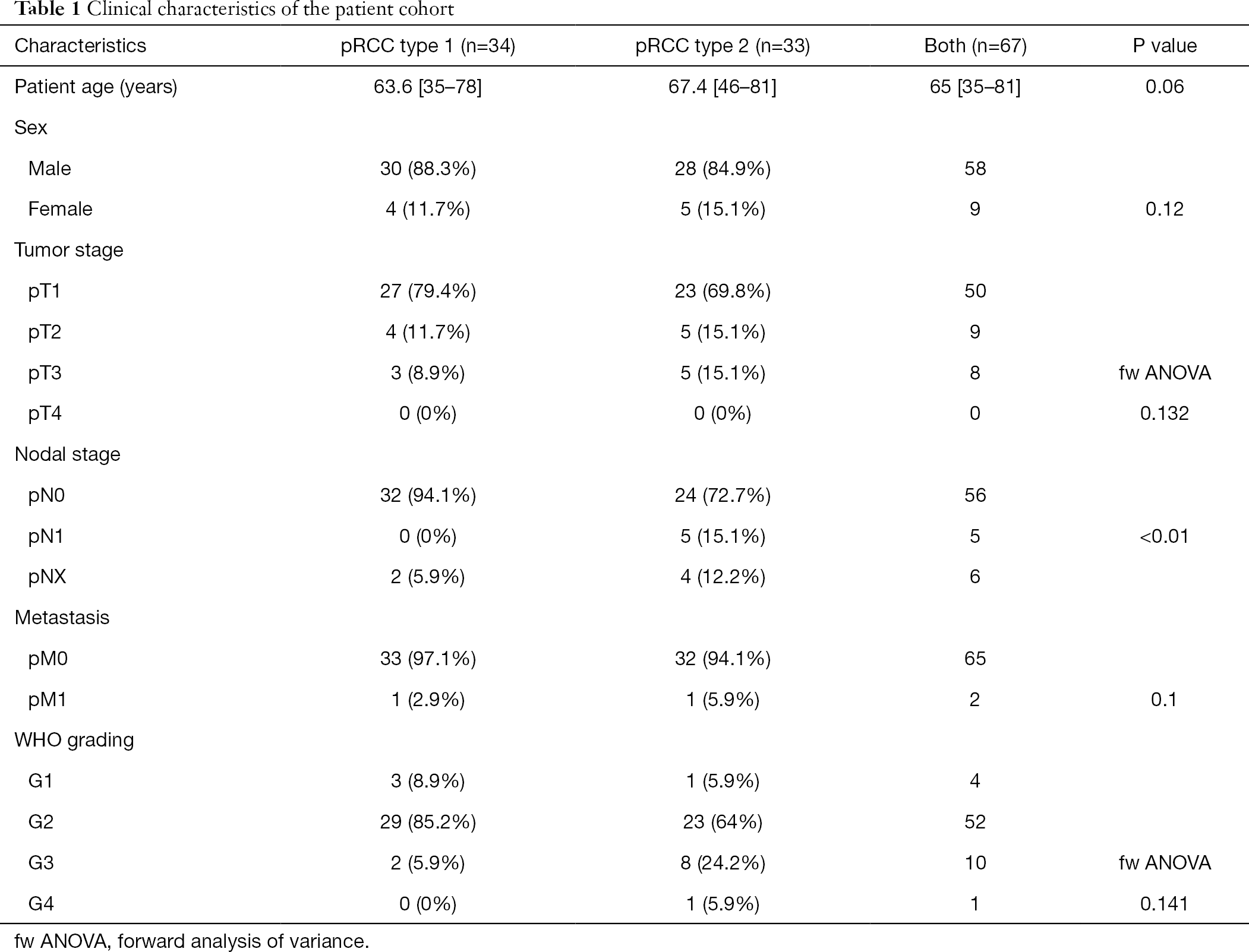 Potential miRNAs were identified based on their elevated expression in pRCC, their elevated expression in either type 1 or type 2 pRCC and high overall expression levels on the basis of previously published results (12-14). To allow the identification of a robust and sensitive serum marker, we further selected only miRNAs that were already present in serum in detectable levels in healthy controls (11,15). An overview of the experimental setup is shown in Figure 1A. 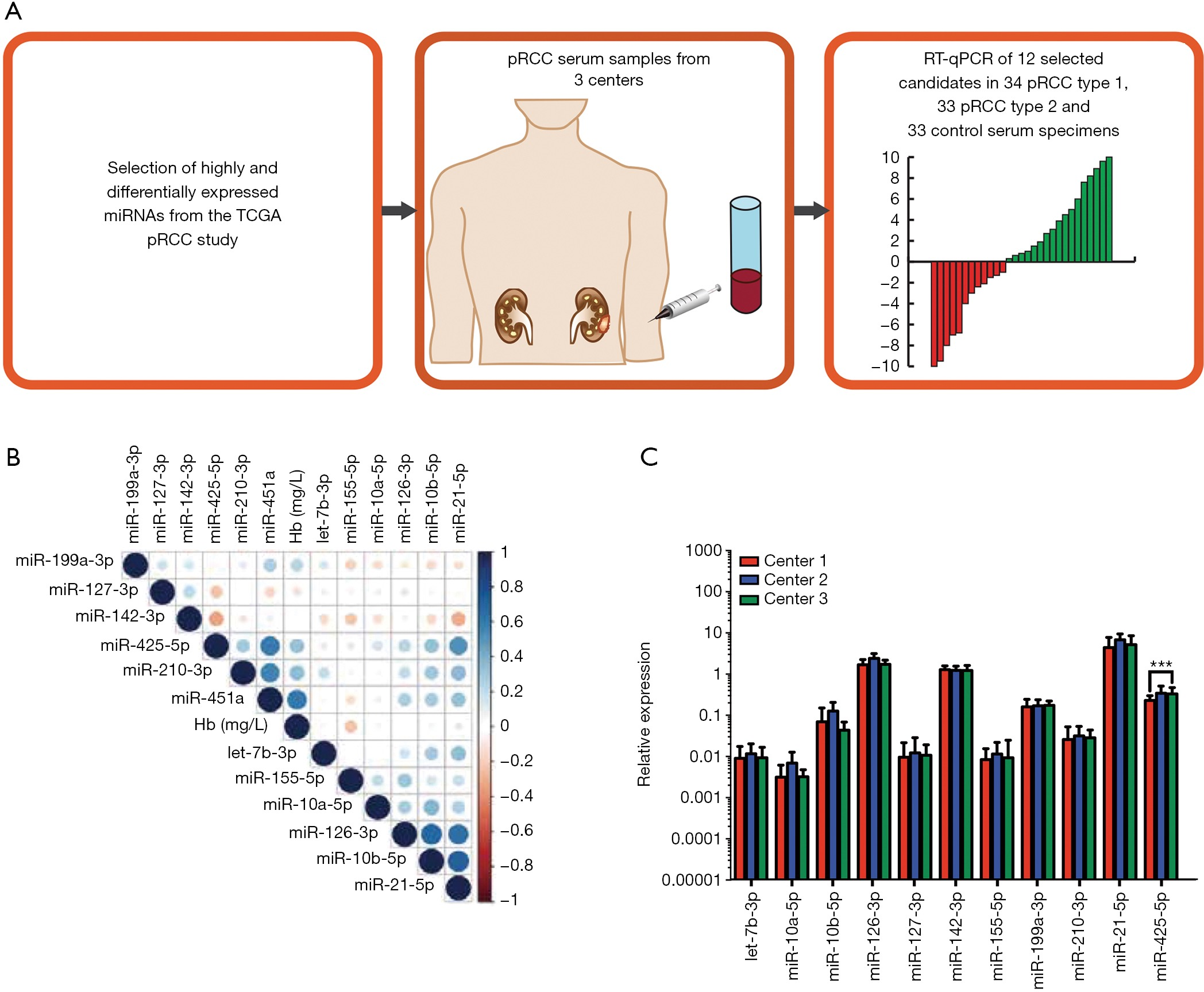 Comparability validation: normalized relative miR-expression in relation to their center of origin

We performed PCA of normalized miRNAs to identify relevant patients’ subgroups. However, miRNA expression was not able to cluster serum samples and the first two components were only able to explain 50% of the observed variance (Figure 2A). Likewise, supervised hierarchical clustering clearly shows that miRNA expression did not differentiate tumor samples from healthy controls (Figure 2B). The hierarchical clustering also indicated that no single miRNA was clearly differentially expressed between subtype 1 and subtype 2 sera (compare samples marked in red and blue), which was confirmed by direct comparison of each miRNAs in the pRCC samples and healthy controls (Figure S1). 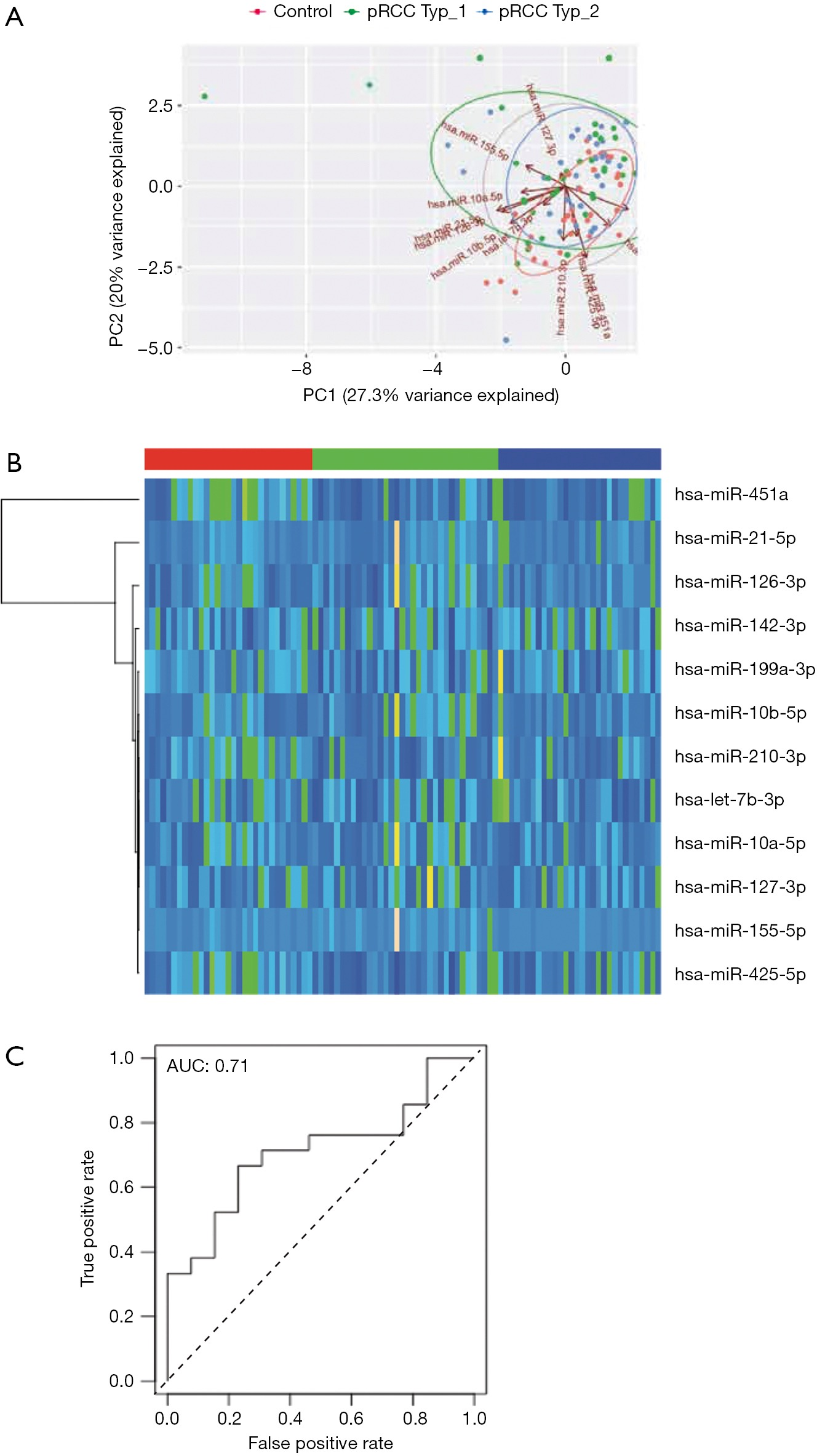 In line with the PCA and hierarchical clustering, logistic regression analysis did not identify a single independent diagnostic marker and a model with all miRNA only resulted in an AUC of 0.71 in ROC analysis (Figure 2C).

Detailed expression data with regard to centres and subclasses are presented in Figure S1.

Association of miRNA expression and clinicopathological parameters in pRCC sera

To explore prognostic liabilities of the assessed miRNA expression profiles, we correlated the expression of all examined serum miRNAs with clinicopathological parameters, grouping patients into a localized (pT1-2 and/or pN0 and/or pM0) or advanced (defined as pT>3 and/or pN+ and/or pM+) disease group. miR-21-5p was significantly higher expressed in advanced samples in comparison to non-advanced samples and control sera in the Berlin cohort as well as in the cross cohort comparison (Figure 3) and showed a borderline significance in the Wurzburg cohort. As the Bonn cohort only contained two advanced disease sample, we did not consider this cohort separately. While several other miRNAs appeared differentially expressed in advanced samples in one cohort all of the results were not confirmed when combining the data of all cohorts. For example: while miR-10b-5p appeared highly expressed in advanced samples in the Charité and Würzburg cohorts it failed to show a statistically significant result in the cross cohort comparison (see Figure S2 for an overview of all miRNA expression patterns grouped into the single centres and combined). 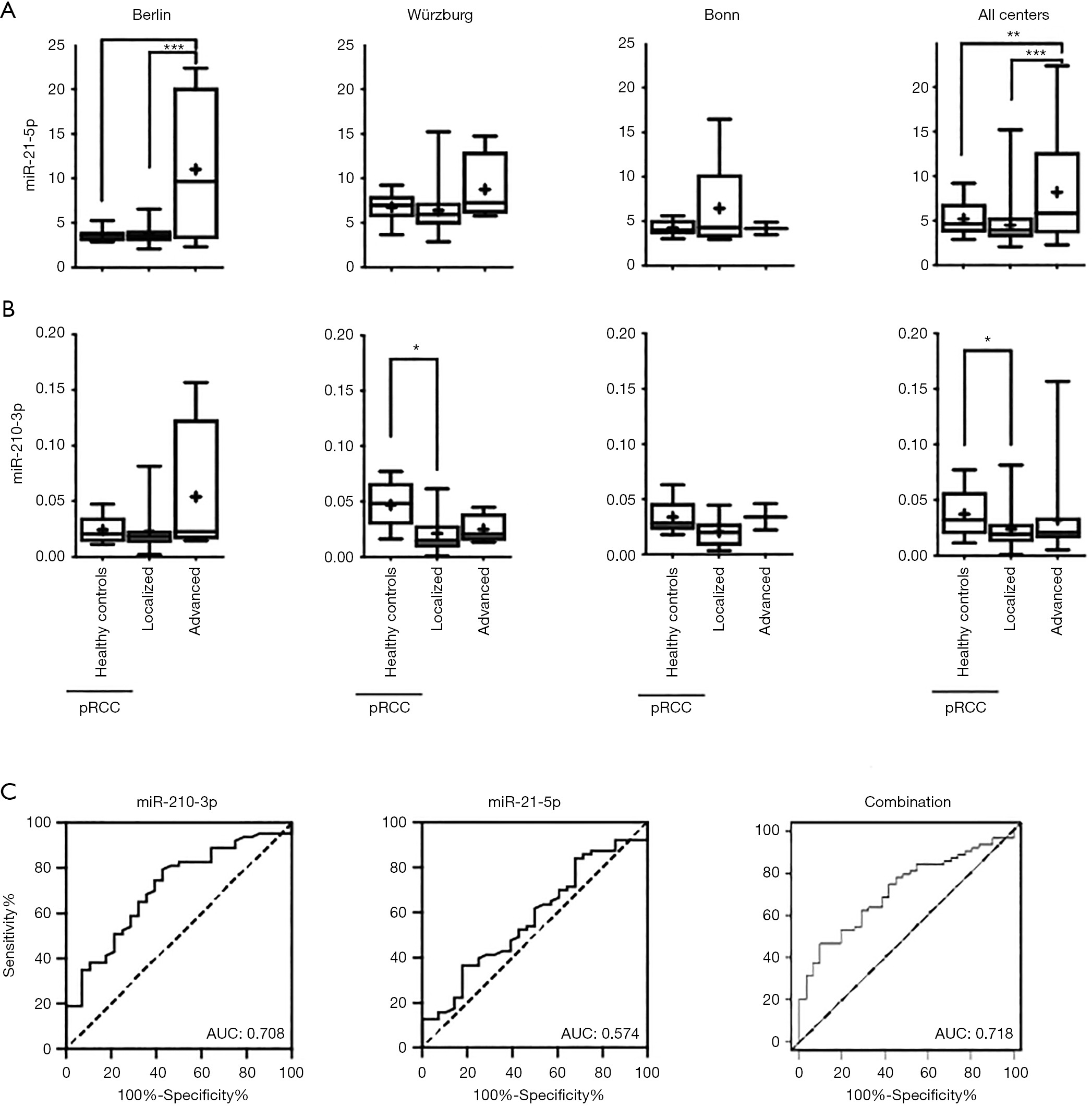 The potential of circulating miRNAs as diagnostic and/or prognostic biomarker has been investigated in RCC in the past years. However, these studies focussed on the most common subtype clear cell RCC (16,17). The analysis of serum/plasma miRNAs in pRCC patients was limited to few patients so far and these were usually part of a larger cohort comprising of patients with all histological subtypes (18-20). As a result, there is no reliable information regarding the relevance of circulating miRNAs in these patients. We thus studied serum miRNA expression in a multi-centre cohort including 67 pRCC patients and 33 healthy individuals.

We chose 11 miRNAs for analysis in serum samples based on their potential role as diagnostic (13,14) or pRCC type 1 vs. type 2 discriminative tissue markers (12) in tissue. Somewhat disappointingly we did not observe a significant different expression of any serum miRNA in patients with pRCC and healthy controls. However, miR-21-5p levels were significantly increased in patients with advanced pRCC. In general, miR-21 is one of the most frequently upregulated miRNAs in solid malignancies (21) and considered to be a typical “onco-miR” as most of its targets are tumour suppressors (22). Notably, miR-21 serum levels were earlier correlated with advanced clinical stage in ccRCC patients (23). Tusong et al. further reported that serum miR-21 levels decreased following nephrectomy in patients with ccRCC (24). We thus assume that serum miR-21 expression could be helpful to identify RCC patients with advanced disease.

Our study has several strengthens: the multi-centre designs allowed us to analyse the expression of serum miRNAs in a relevant number (n=67) of pRCC patients. In addition, the multi-centre setting stands out from most of earlier studies reported in patients with RCC so far. Finally, the quality control by analysing haemolysis-associated miRNAs (miR-23a-3p and miR-451a-5p) as well as the analysis of three reference miRNAs (miR-23a-3p, miR-191-5p and miR-103a-3p) for normalization was superior to other studies in the field of RCC (16,17).

However, there are also limitations to this study. We did not perform global screening of miRNA expression in pRCC tissue in comparison to healthy controls. This resulted in lack of identifying a sensitive miRNA-based marker for pRCC detection and subtype differentiation. Our selection process was based on the hypothesis that upregulation of miRNA expression in pRCC tissue should be reflected by higher miRNAs serum levels. miRNAs can either be actively secreted by the miRNA-expressing cells in in vesicles or bound to Ago proteins or they can be passively released from apoptotic and necrotic cells (17). Passive release of miRNAs should result in serum miRNA levels reflecting the observed deregulation of miRNAs in tissue. Active release on the other hand will result in a different distribution of miRNAs in serum and tissue. Our findings report apparent discrepancies in tissue and serum, making a global screening in serum mandatory for the identification of potential non-invasive miRNA markers.

Our data also raise the question on whether serum miRNA serum levels are sensitive enough to be used as diagnostic markers. While we observed reduced miR-210-3p serum levels in localized and elevated serum miR-21 levels only in advanced cancers, the discriminative power of both miRNA biomarkers even in combination was moderate. We also observed an increased but not statistically significant elevation for a number of other miRNAs in advanced disease, raising the possibility that only few miRNAs will be released in sufficient levels to the blood stream to be suitable for cancer diagnosis. We will add however that we only studied a limited number of miRNAs. It might well be that we will identify miRNAs, whose levels are elevated in patients with early stage disease by global screening approaches in future studies. Further, we suggest the validation of our findings for miR-21-5p and miR-210-5p in a larger cohort.

The analysis of serum miRNAs did not provide diagnostic information in patients with pRCC and was not able to differentiate type 1 and type 2 subtypes. Serum miR-21-5p expression was increased in patients with advanced pRCC, whereas miR-210-3p expression was down-regulated in localized pRCC in our multicenter approach. We thus propose that these two miRs – after validation in larger patient cohorts—could be useful as prognostic biomarkers in this subtype of a clinically relevant disease.

Funding: This publication was funded by a twinning research grant of the Berlin Institute of Health.

Conflicts of Interest: All authors have completed the ICMJE uniform disclosure form (available at http://dx.doi.org/10.21037/tau.2020.03.18). The authors have no conflicts of interest to declare.

Ethical Statement: The authors are accountable for all aspects of the work in ensuring that questions related to the accuracy or integrity of any part of the work are appropriately investigated and resolved. This study was approved by the local human research ethics committees of the three participating medical centres (Charité Berlin: No. EA1/134/12, University of Bonn: No. 036/08, University of Würzburg: No. 136/08). All patients provided written informed consent prior to being enrolled in the study.