The annual incidence of renal cell carcinoma (RCC), the form of renal tumor most frequently suffered by adults, is rising (1). Although clear cell, papillary and chromophobe RCC account for most diagnoses, other histological subtypes with type-specific clinicopathological characteristics and prognoses may also present. Partial nephrectomy (PN) is the preferred treatment recommended by current guidelines for patients with T1N0M0 RCC, and histological subtypes are not taken into consideration in this recommendation (2). Sarcomatoid renal cell carcinoma (SRCC), a rarely encountered variant of RCC, comprises about 5% of RCC cases. SRCC arises from any subtype of epithelial RCC, such as clear cell, papillary, or chromophobe, and presents as a deeply dedifferentiated tumor (3). SRCC is associated with poor clinical outcomes and advanced clinicopathological features (4). Currently there is no reliable evidence that supports the recommendation that PN can be an effective option for T1N0M0 SRCC. In the present study, cases of T1N0M0 SRCC were retrieved from the National Cancer Institute’s Surveillance, Epidemiology, and End Results (SEER) program to inform comparisons between the differences in the survival of patients treated by either PN or radical nephrectomy (RN) after adjusting for other variables influencing survival.

A cohort of SRCC patients diagnosed between 2004 and 2015 was established based on data obtained from SEER, which brings together high-quality data from 18 cancer registries, accounting for about 27.8% of Americans according to the United States’ 2010 census (5). SRCC includes the union of histologic type ICD-O-3 8318 (RCC, sarcomatoid) and conventional RCC with Kidney Parenchyma CS Site-Specific Factor 4 code 010, while conventional RCC includes the union of histologic type ICD-O-3 8310 [clear cell adenocarcinoma, not specified (NOS)], 8312 (RCC), 8260 (papillary adenocarcinoma, NOS), 8317 (RCC, chromophobe type) and 8255 (adenocarcinoma with mixed subtypes). RCC, its size smaller than 7 cm and confined to the kidney was defined as stage T1 (≤4 cm as T1a, 4–7 cm as T1b) according to American Joint Committee on Cancer (AJCC) TNM staging system. Only “microscopically confirmed” RCC patients were included in our study. Cases without follow-up time or vital status were excluded. Ultimately, only patients with T1N0M0 SRCC were included.

Multivariable Cox regression analysis was used to identify variables that significantly impact the overall survival (OS) or cancer-specific survival (CSS) among patients with T1N0M0 SRCC. The OS and CSS of T1N0M0 SRCC patients treated by either PN (derived from using RX Summ-Surg Prim Site code 30) or RN (derived from using RX Summ-Surg Prim Site code 40, 50, 80) were compared after propensity score matching (PSM) of patient cohorts to reduce potential confounding effects and the treatment selection bias. PSM was conducted by R version 3.5.3 and the MatchIt package (6). Propensity matching included variables significantly related to OS and CSS based on the results of multivariable Cox regression analysis. Nearest-neighbor matching with a 1:1 ratio and a caliper distance of 0.2 was used.

A total of 3,655 SRCC cases of SRCC were identified on the SEER database, of which 452 were stage T1N0M0 (160 cases of T1aN0M0 and 292 cases of T1bN0M0). The median follow-up period in PN-treated T1N0M0 SRCC was 38 months (ranging from 2 to 132 months), while that in RN-treated cases was 39 months (ranging from 0 to 150 months). Patients’ clinical and pathological characteristics at baseline were shown in Table 1. 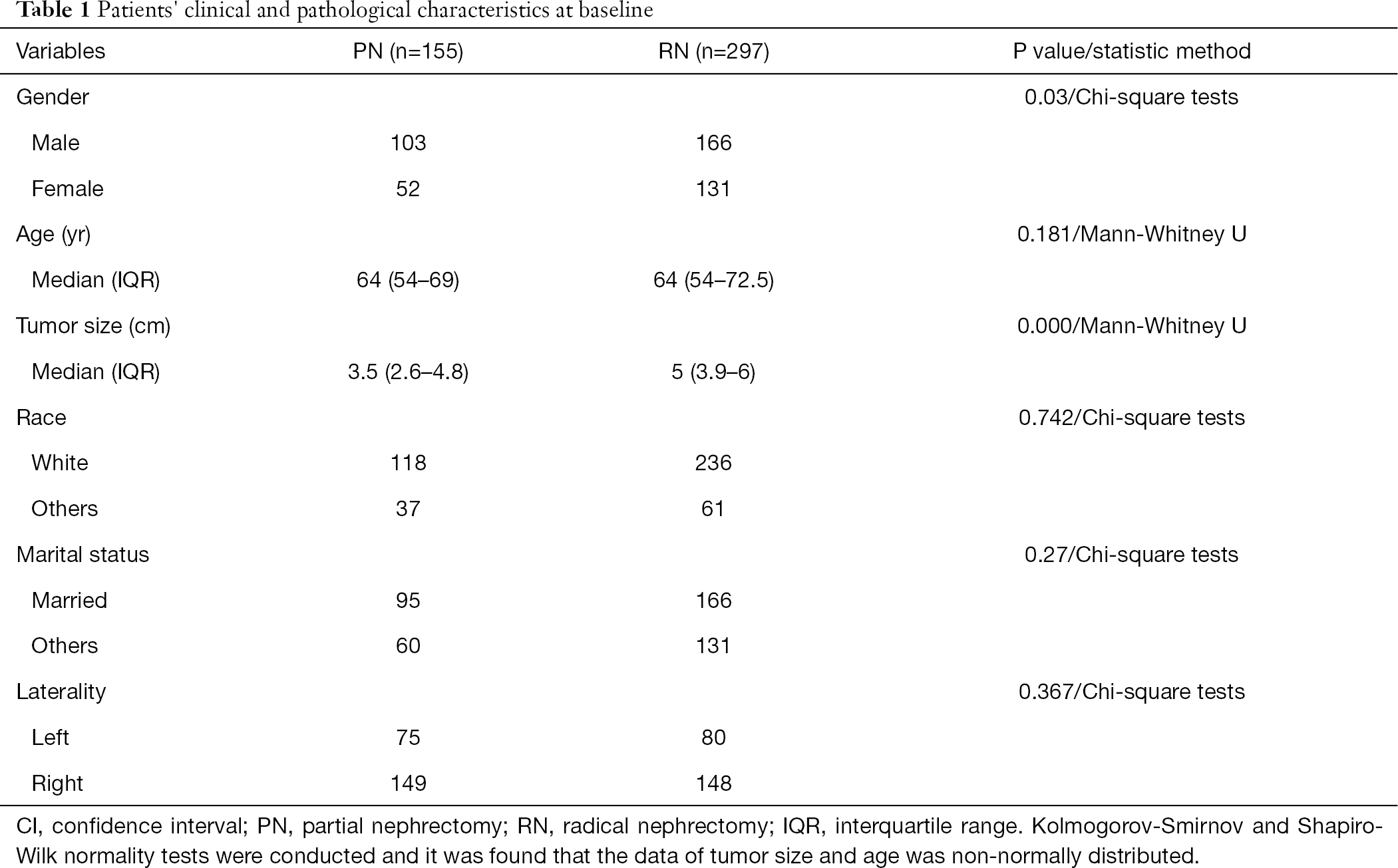 Outcomes of T1N0M0 SRCC patients treated by PN or RN 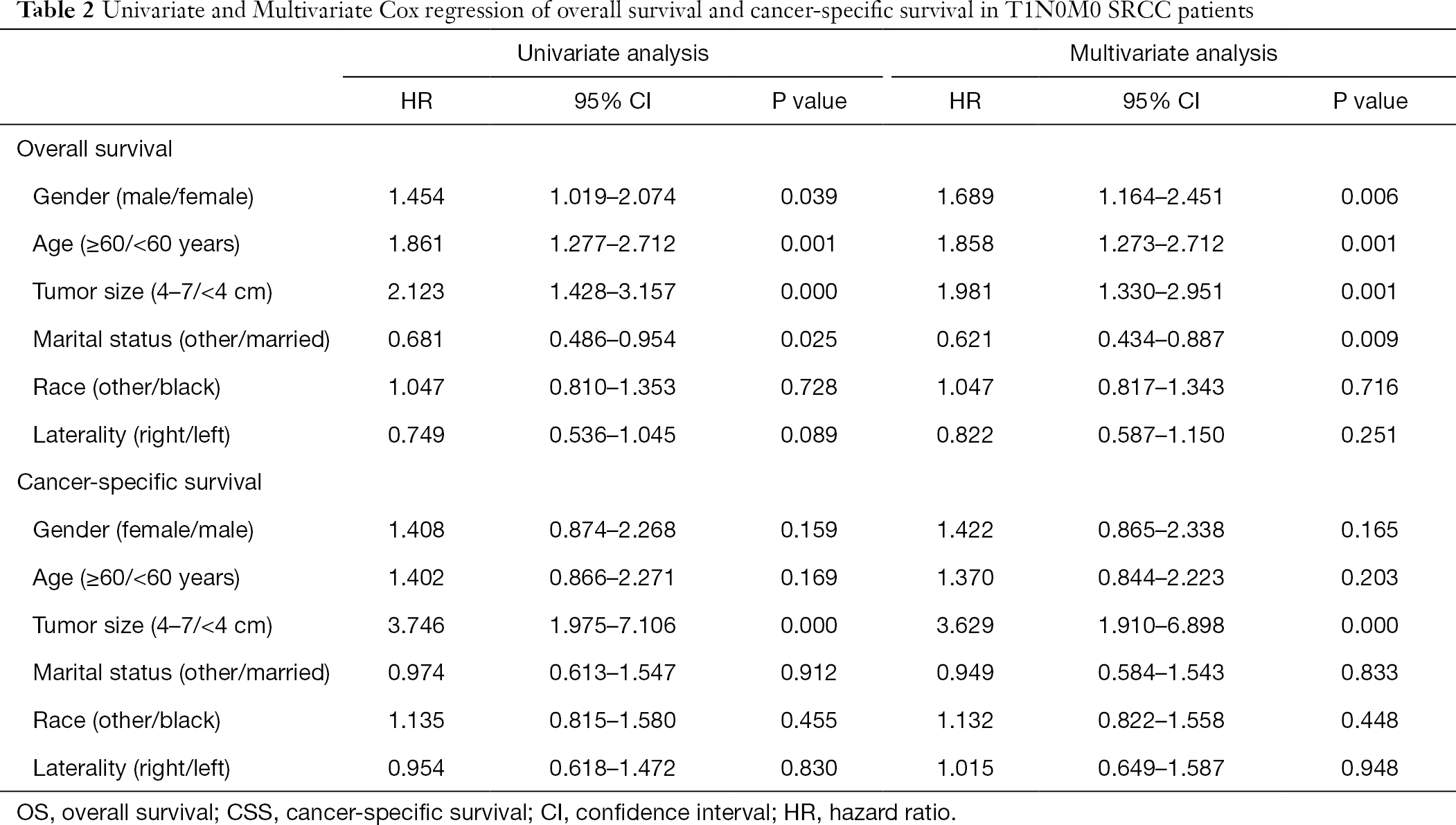 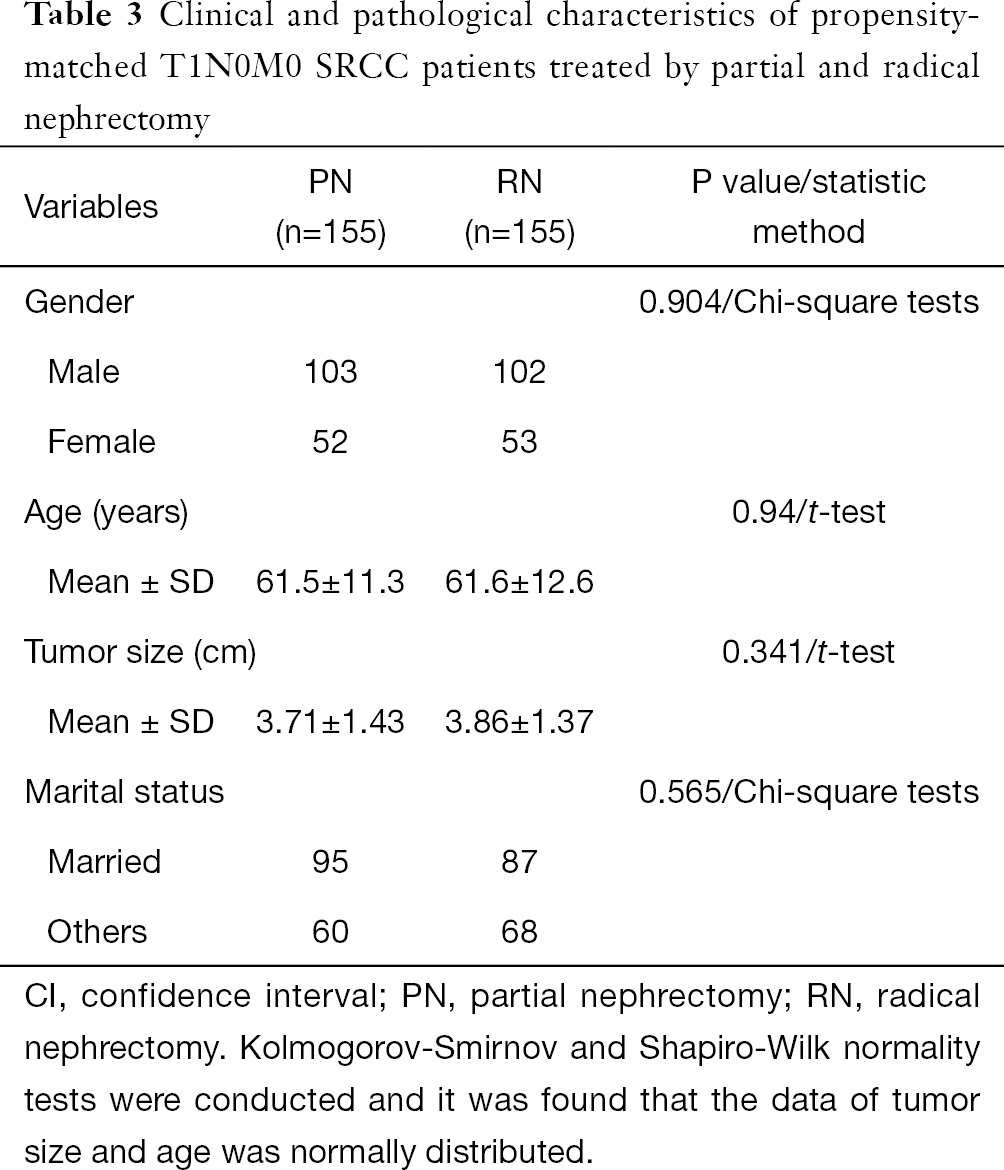 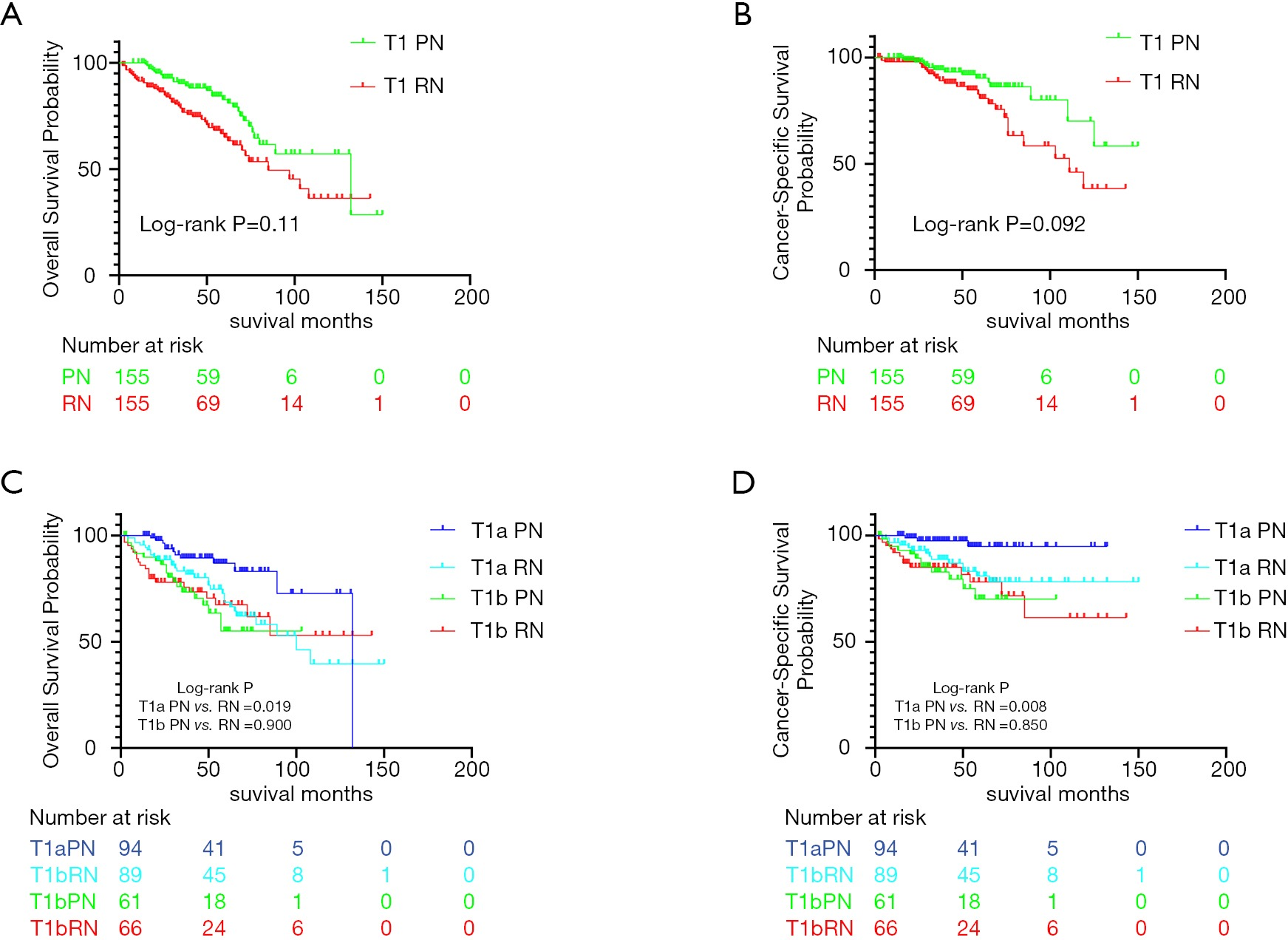 We compared OS of PN- and RN-treated SRCC patients in T1aN0M0 and T1bN0M0 subgroups and in subgroups according to age (>60 or ≤60 years old), after balancing other variables impacting survival. A survival benefit was found in patients treated by PN in the T1aN0M0 subgroup, while there was no significant difference in OS in T1bN0M0 SRCC or T1N0M0 SRCC between patients older or younger than 60 years treated by PN or RN (Figure 2). 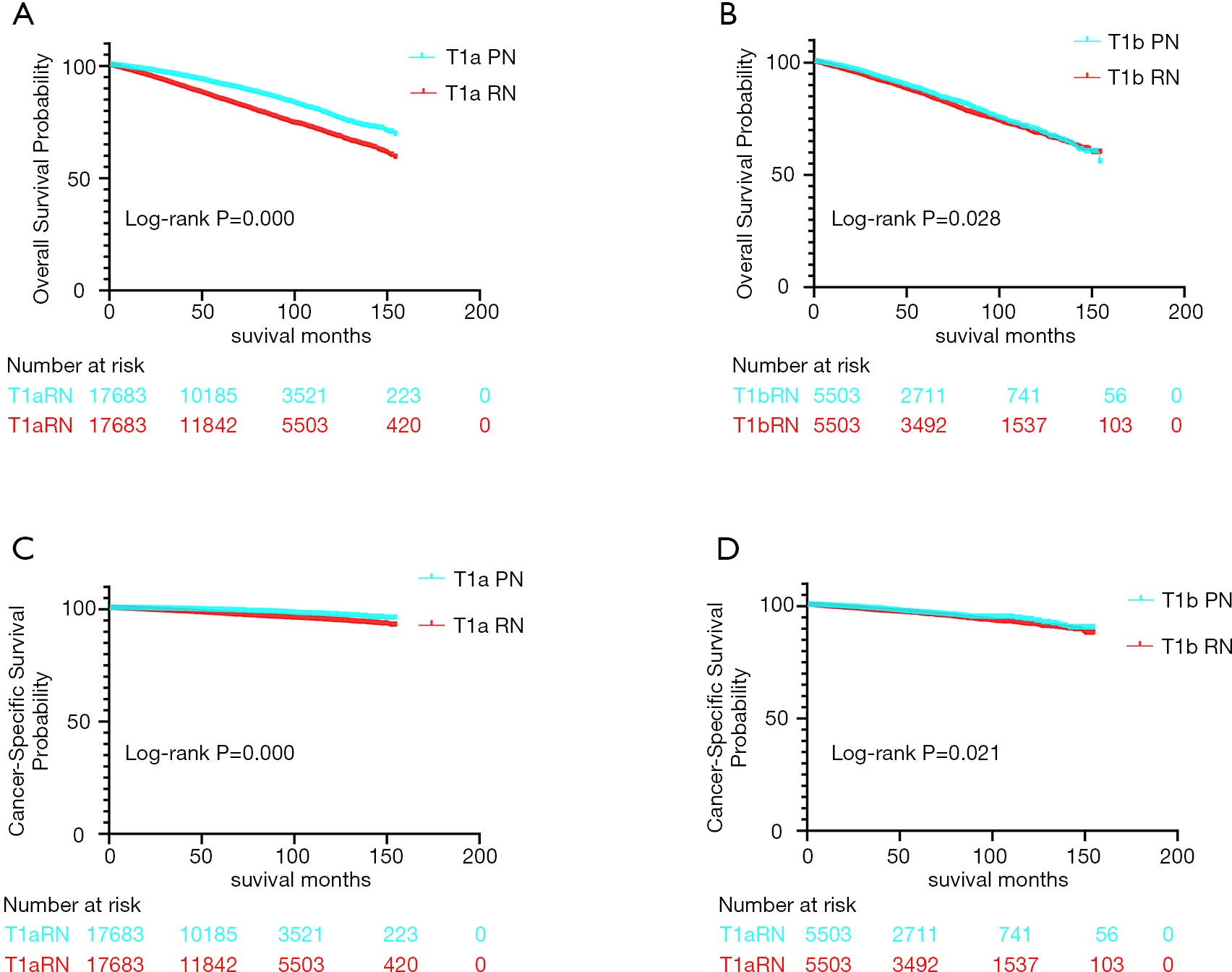 Currently, PN is the preferred surgical treatment for T1N0M0 RCC in clinical practice, although the only existing randomized controlled trial (RCT), EORTC 30904, did not find that T1N0M0 RCC patients with a normal contralateral kidney treated by PN had superior OS compared to those treated by RN (7). Because patients with SRCC have the worst prognosis of all renal tumor patients (8), SRCC should be managed differently to conventional RCC. Empirically, PN is not recommended for patients with SRCC (3). Ideally, RCTs to compare PN and RN for T1N0M0 SRCC should be conducted. However, it is difficult to conduct such RCTs since there is currently no reliable preoperative method to identify SRCC (9). In clinical practice, few PNs are performed at a single center because the presence of large and bulky tumors can make the surgery impossible. For example, only 2 out of a series of 77 cases of localized SRCC at MD Anderson Cancer Center underwent PN (10). Therefore, it is difficult to systematically assess the outcomes of T1N0M0 SRCC treated by PN.

In this population-based study, 155 T1N0M0 SRCC patients who underwent PN were retrieved from the SEER database, forming the largest cohort of such cases reported to date. After adjusting for preoperative features associated with survival, the OS and CSS of the T1N0M0 patients treated by PN were not inferior to those of RN-treated patients. The survival benefit treated by PN was not found in T1N0M0 SRCC patients, while found in T1N0M0 non-sarcomatoid RCC in the present study. One possible cause for this result may be the differential prognostic role of histological feature. Although we found a survival benefit treated by PN in T1aN0M0 SRCC patients, it is still not clear whether this was result from the selection bias between PN- and RN-treated groups or PN really providing superior OS in these patients. Several other retrospective analyses had demonstrated improvements in OS treated with PN in T1 RCC patients (11). However, Brian S el al. conducted a SEER-Medicare matched cohort study, which compared RCC surgical groups with separate controls, and found that the survival advantage conferred by PN was likely due to the selection bias (12). No survival difference existed between PN- and RN-treated T1N0M0 SRCC patients younger or older than 60 years, which is consistent with previous studies. Subgroup analysis of OS in EORTC 30904 trial of PN Versus RN also showed no difference in older or younger patients (13). An et al. also found OS and CSS were equivalent between PN- and RN-treated T1-T2 renal masses patients older than 65 years (14).

There are several limitations of the present study. First, the bias that impacted the survival of patients treated with PN and RN may exist, and might have not been completely removed using PSM, partly because of the limitations of SEER data. SEER data may be influenced by the variables, which are not recorded, not fully reported, incomplete, lacking uniformity in coding and reporting of data, or the movement of patients into or from the areas covered by the SEER program. Second, lacking information about the percentage of sarcomatoid component in each SRCC patient and the involvement of pathologists with different expertise limit the quality of pathology diagnosis. Previous studies have demonstrated that a greater percentage of sarcomatoid was associated with a worse outcome (15). Third, the difference between tumor mass complexity and surgical approaches or techniques may also impact the survival. However we had not balanced them between PN- and RN-treated groups, due to lacking information of nephrometry scores of renal mass (like RENAL or PADUA score), and the type of surgical approaches and techniques in SEER database. Fourth, based on the experience of Capitanio et al. (16), EAU guidelines recommend offering an extended lymph node dissection (eLND) to patients with adverse clinical features. There were only 9 patients in the 297 RN-treated, while no one in the 155 PN-treated SRCC patients who accepted eLND, if we regarded a cutoff of 4 or more regional lymph nodes removed as eLND. In this context, it is hard to analyse the impact of eLND on the present study. Sixth, in the cohort of SRCC patients retrieved for our study, only the sixth edition of AJCC TNM classifications could be retrieved, while several modifications have been made to the T and N stages in the current (eighth) edition. However, given that we only investigated patients with T1N0M0 RCC in the present study, it should not be significantly impacted by TNM stage modifications in the sixth, seventh, and eighth editions.

The present study was a retrospective analysis based on one public database, thus it just obtained results with the low-level evidence. The further investigation considering more databases data and multicenter prospective studies, is needed to verify the results of present study. If SRCC can be identified preoperatively in biopsy tissue, or with molecular biomarkers or imaging, then RCTs to compare the outcomes of PN versus RN for T1N0M0 SRCC may provide more definitive results. In the real world, where there is currently neither a reliable method for detecting SRCC preoperatively nor a large number of T1N0M0 SRCC cases treated with PN in single centers, results of our population-based study may supply the only evidence available for informed clinical decision making. For example, if SRCC is identified postoperatively in T1N0M0 tumors treated with PN, some clinicians may wonder whether salvage radical surgery should be performed because of the infiltrative nature of SRCC. Based on the results of our present study, salvage radical surgery may not be necessary for patients treated with PN for a T1N0M0 renal mass that is confirmed postoperatively as SRCC.

We thank AME Editing Service for editing this manuscript.

Conflicts of Interest: All authors have completed the ICMJE uniform disclosure form (available at http://dx.doi.org/10.21037/tau.2020.02.19). The authors have no conflicts of interest to declare.

Ethical Statement: The authors are accountable for all aspects of the work in ensuring that questions related to the accuracy or integrity of any part of the work are appropriately investigated and resolved. Informed consent was not required because personal identifying information was not involved. We obtained the permission to access the SEER database with the ID number 19012-Nov2017 via Internet access method. Ethical approval was waived by the local ethics committee, as SEER data is publicly available, de-identified.