Morbidity following prostate brachytherapy is relatively common, with approximately 50% of men reporting a complication within 2 years of the procedure (1). The mechanism of injury generally stems from the location of the radioactive brachytherapy seeds, which are placed into the prostate (2). The radioactive brachytherapy seeds ideally produce only local damage to the cancerous regions but may also irradiate neighboring structures. Urinary symptoms are most frequent (34%), followed by bowel (21%), and erectile (17%) symptoms (1,3). Suspected cases of pudendal nerve injury following brachytherapy are less common and often exhibit chronic pain, hyperesthesia, and paresthesia of the sensory innervations of the pudendal nerve (4,5). These symptoms make common activities such as urinating, sitting, or having intercourse difficult and result in substantial reductions in quality of life. Case reports of chronic pain following brachytherapy exist, but appear complicated by other comorbidities such as chronic bacterial prostatitis (5). Further, there are no confirmed cases of pudendal nerve injury in which the brachytherapy seeds were visualized with certainty near the pudendal nerve.

High-resolution magnetic resonance neurography at 3 Tesla (3T MRN) enables the visualization of small nerves and their surrounding soft tissue structures, and can often diagnose peripheral nerve injury and neuropathy (8). However, 3T MRN may be limited in the setting of brachytherapy-mediated injury due to magnetic resonance (MR) image artifacts created by metallic brachytherapy seeds. Using high-resolution metal artifact reduction MRN techniques (9), we report a case presenting with signs and symptoms of pudendal nerve injury after brachytherapy seed placement, where 3T MRN demonstrated the seeds in close proximity with the pudendal nerves, subsequent confirmation of pudendal nerve-mediated symptoms through selective nerve blocks, and successful treatment through surgical resection of the perineal branches of the pudendal nerve. We present the following case in accordance with the CARE reporting checklist (available at ).

The data presented in this case report were obtained under an internal review board-approved protocol for prospective data collection and with informed consent from the patient.

A 67-year-old man with a past medical history of hyperlipidemia, benign prostatic hyperplasia (BPH), and prostate cancer (Gleason score 3+4=7) presented to our clinic with intractable pain of the penis and scrotum accompanied by a burning sensation during urination that was so severe he could not void completely. The symptoms developed within one month following brachytherapy treatment consisting of 104 brachytherapy seeds that were placed with transrectal ultrasonography guidance for a local dose of 125 Gy. The patient’s symptoms consisted of excruciating pain on urination with an International Prostate Symptom Score (10) of 35/35, urinary bother symptom score (10) of 6/6, and a pain severity of 10/10 on an 11-point visual analog scale where 10 is the maximum imaginable pain. The patient’s pain was exacerbated by sitting and there were no sensory or motor deficits.

High-resolution 3T MRN with high bandwidth-based metal artifact reduction technique (9) showed the brachytherapy seeds located in close proximity to the right and left pudendal nerves (Figure 1), raising the possibility of radiation-induced pudendal nerve injury. Because the MRN appearance of the pudendal nerves was otherwise normal without findings to indicate neuropathy, selective MRN-guided nerve blocks were performed in Alcock’s canal and proximal to the perineal branches, in order to test the hypothesis that the pudendal nerve was the pain generator. 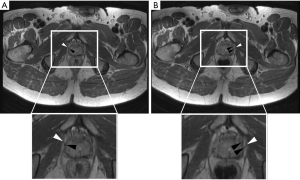 Prior to procedure, a urination challenge produced 5/10 pain on a visual analogue scale. The procedure utilized a clinical 3T MRI system. Two 20-gauge MR-conditional injection needles were advanced under intermittent MRI using metal artifact reduction MRI into the right and left posterior aperture of Alcock’s canal, just next to the pudendal nerves (11). Each pudendal canal was injected with 7 mL of local anesthetic mixed with long acting corticosteroid (6 mL of 1% ropivacaine mixed and 1 mL/6 mg of betamethasone injectable suspension) (Figure 2). Procedural MRN images confirmed distention of the pudendal canal and circumferential perineural distribution of the injectants around the pudendal nerves on each side. There were no complications.

Sixty minutes after the procedure, the patient was able to urinate normally, which was painless and similar to his pre-brachytherapy state. In addition, sitting on a chair with a hard surface did not produce his typical sitting pain over a period of 20 minutes. On the evening of the day of the nerve block procedure, his symptoms recurred. The functional results of the perineural blocks confirmed the pudendal nerves as the pain generators and supported the hypothesis that the radioactive brachytherapy seeds located next to the pudendal nerves were inducing a local neuropathy. Over the following 2 weeks, there were no symptom-relieving effects attributable to the injected perineural steroids.

Given the patient’s favorable response to pudendal nerve blocks, the patient and care team discussed the risks, benefits, and alternatives to surgical resection of the perineal branches of the right and left pudendal nerves (12). The patient elected to undergo the operation after providing written informed consent. The operation was conducted under general anesthesia and without complications by two experienced surgeons. Briefly, the patient was placed in the dorsal lithotomy position and 4-cm incisions made bilaterally using a No. 15 blade. Bipolar cautery and sharp dissection were used to visualize the ischiorectal fossae. Fibrosis in the ischiorectal fossae was noted, with shiny white scar tissue replacing native adipose tissue on the left more than right (Figure 3). The perineal branches of the pudendal nerves were identified (Figure 3) and traced back to the exit of the Alcock’s canal where the perineal branches were cauterized. Of note, the patient’s left perineal branch of the pudendal nerve was grossly thicker than the right branch. The resected tissue was sent for pathological analysis. The proximal branches of each nerve were then buried in Alcock’s canal. Bleeding during the operation was minimal and all incisions were closed in standard fashion. 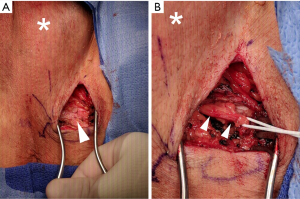 Two weeks after the operation, the patient reported significant improvement in his pain and quality of life as well as remained sexually active. Of note, he no longer required morphine, amitriptyline, or intrarectal diazepam to urinate. His exam was stable at 3-, 7-, 16-month follow-up visits. Figure S1 provides a detailed timeline of the patient’s diagnostic and therapeutic course. 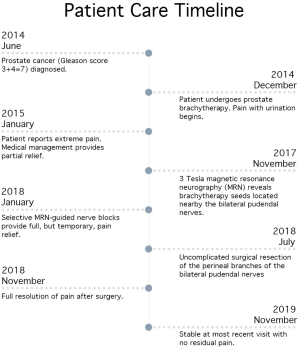 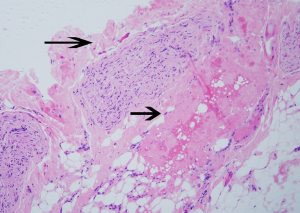 We report the successful diagnosis and treatment of pudendal nerve injury secondary to prostate brachytherapy seeds with diagnostic and interventional 3T MRN and subsequent surgical decompression and sensory branch neurectomy, which resulted in resolution of patient’s pain.

Treatment for pudendal nerve injury is multimodal and includes both oral pain medications, perineural steroid injections, thermal ablation including cryoneurolysis and radiofrequency ablation, and surgical resection or decompression (14-17). In our case, local anesthetics with steroid injections provided short-term pain relief allowing for a diagnosis of pudendal nerve-mediate pain, but the steroids did not result in a long-term pain-relieving effect. While thermal ablation may result in sustained pain relief, loss of pudendal motor function, main sensory sexual functions, and pain recurrence may occur (18). Thus, surgical decompression and neurectomy of the perineal sensory branches represented the best option. As demonstrated in this case, surgical decompression and sensory perineal branch neurectomy can provide longer-term pain relief and preservation of sexual function.

In conclusion, we report a case of pudendal nerve injury secondary to brachytherapy seeds placed outside the prostatic capsule. MRN visualized the extra-prostatic seeds and otherwise normal pudendal nerve. MRN-guided nerve blocks proved valuable for this patient as they provided functional proof that the patient’s pain was pudendal nerve-mediated, which was corroborated by histopathology demonstrating perineural fibrosis suggestive of inflammation and perineural scarring. As brachytherapy seeds are not retrievable, neurectomy of the sensory branches was curative resulting in long-lasting pain relief.

Reporting Checklist: The authors have completed the CARE checklist. Available at

Ethical Statement: The authors are accountable for all aspects of the work in ensuring that questions related to the accuracy or integrity of any part of the work are appropriately investigated and resolved. The data presented in this case report was obtained under an internal review board-approved protocol for prospective data collection and with informed consent from the patient.