Retrograde intrarenal surgery (RIRS) is one of the treatments considered primarily for kidney stone with diameter less than 2 cm (1). Ureteral access sheath (UAS) is an essential and commonly used tool for RIRS (2). The benefit of the use of UAS in RIRS has been proven in various studies. UAS is advantageous as it facilitates repeated intra-ureteral insertion of the flexible ureteroscope and allows irrigation fluid to be increased while maintaining low pressure in the kidneys, thus facilitating perfusion and vision during endoscopic surgery (3-5).

However, sometimes the sheath does not fit well, causing difficulty in operation. For ureter with a very small diameter, UAS insertion might not be possible. It has been reported that up to 10% of patients are unable to insert UAS because of the diameter of a small ureter or a small orifice, because of their small ureteral diameter (6). To avoid failure, a variety of methods have been used to enable UAS insertion when performing RIRS (6). One such method is a manual dilation of the ureter via pre-operative stent insertion and the method is considered as effective and safe (7). However, as the operation is performed in two stages, there exist possibilities of increase in patient’s discomfort and cost of surgery (6). Several studies have reported that preoperative ureteral stenting affects the outcome of ureteroscopic stone surgery (8-10). Some authors have also argued that the preoperative ureteral stent can extend the ureter passively (7). However, none of the studies has reported the relationship between preoperative ureteral stenting and success rate of accessed sheath insertion. Therefore, the objective of this study was to investigate the relationship between preoperative ureteral stenting and UAS insertion and analyze the effect of renal stone surgery on outcome.

The study was approved by the Institutional Review Board of Inje Universisy Sanggye Paik Hospital (approval code: H-2018-10-003). This was a retrospective study and exempted from patient written consent. All contents and protocols related to this study followed the Helsinki guidelines. The primary endpoint was the stone free rates (SFRs) between the ureter and preoperative groups. And the secondary endpoint was related to the operation duration, complication rates, access sheath insertion success rates, and clinical SFRs (less than 4 mm). The inclusion criteria were those age 18 or older who underwent RIRS surgery with renal stones October 2014–June 2017. Only those cases wherein UAS was performed during the RIRS surgery were included. Some patients had delayed RIRS surgery after the ureteral stent was inserted because the ureteroscopic lithotripsy (URS) was not inserted. Some patients had a pre-stenting plan before surgery. Some patients have had surgery for renal stones after the ureteral stent was inserted for a variety of reasons, including pain, acute kidney injury, infection, and hydronephrosis. Medical records of 122 patients who underwent RIRS with renal stone from October 2014 to June 2017 in a single institutional hospital were retrospectively analyzed. Patients who underwent previous stone surgery, such as RIRS, URS, percutaneous nephrolithotomy (PCNL), minimally invasive PCNL, or laparoscopic ureterolithotomy were excluded. Patients who underwent ureter surgery such as pyeloplasty and those who had ureteral stricture, were also excluded. Eligible patients were divided into prestented group and non-stented group. Preoperative ureteral stent insertion was performed under local anesthesia. First, retrograde pyelography using cystoscopy and the open-ended 5-Fr ureteral catheter was performed and the ureteral stent was inserted using hydrophilic and stiff guide wire. The size of the ureteral stent inserted before surgery was 6–7 Fr. The preoperative ureteral stent indwelling period was 1–2 weeks. RIRS was usually performed about 1–2 weeks subsequent to stent insertion. All patients, except those with urine culture positive, generally administered third-generation cephalosporin (ceftriaxone 2 g) one hour before surgery. In the case of symptomatic systemic infection or urine culture positive, antibiotics were used for 1–2 weeks. After confirming that the culture was negative, surgery was performed. All patients underwent surgery under general anesthesia. UAS insertion was attempted prior to the flexible ureteroscopy procedure. A flexible ureteroscope was inserted under a hydrophilic guide wire for patients with narrow ureter and in whom UAS insertion was a failure. The size of the UAS was mostly 12/14 Fr. In some cases, it was 10/12 Fr or 11/13 Fr. UAS insertion routinely tries 12/14 Fr UAS first. If the 12/14 Fr UAS does not fit, try the 11/13 Fr and 10/12 Fr with smaller inner diameters. The average length was 45 cm for men and 35 cm for women. Stone fragmentation was performed using holmium: yttrium-aluminum-garnet (Holmium YAG) laser. Removal of the stone was done using a stone basket to the maximal extent possible. Dusting was performed on the remaining residual stone. Ureter injury was confirmed by examining the inside of the ureter when removing the UAS, accompanied with the flexible URS, and removing the UAS and descending from the renal pelvis to the distal ureter. If there were no postoperative complications such as a ureter injury, the postoperative ureter stent was removed one week after the operation routinely. SFR was defined as the diameter of the residual stones on CT, 0 and <4 mm. CT was generally performed three months after RIRS.

In statistical analysis, continuous variables were expressed as median value and range or mean values and standard deviation using technical statistics. Nominal variables are expressed as a probability (%) through frequency analysis and crossover analysis. The primary endpoint was SFR analyzed based on two criteria: the complete free rate of 0 mm and a clinical free rate of less than 4 mm. The secondary endpoint was the difference in operation time and success rate of access sheath insertion according to the use of a preoperative ureteral stent. One-to-one propensity score-matched analysis was performed. The propensity score was calculated by preoperative covariates using multivariate regression analysis for each patient. Covariates were age, BMI, sex, Cr level, eGFR, hydronephrosis, and stone characteristics. All statistical tests were performed using IBM SPSS Statistics, version 22.0 (IBM, Armonk, NY, USA) and a P value of less than 0.05 was considered statistically significant. 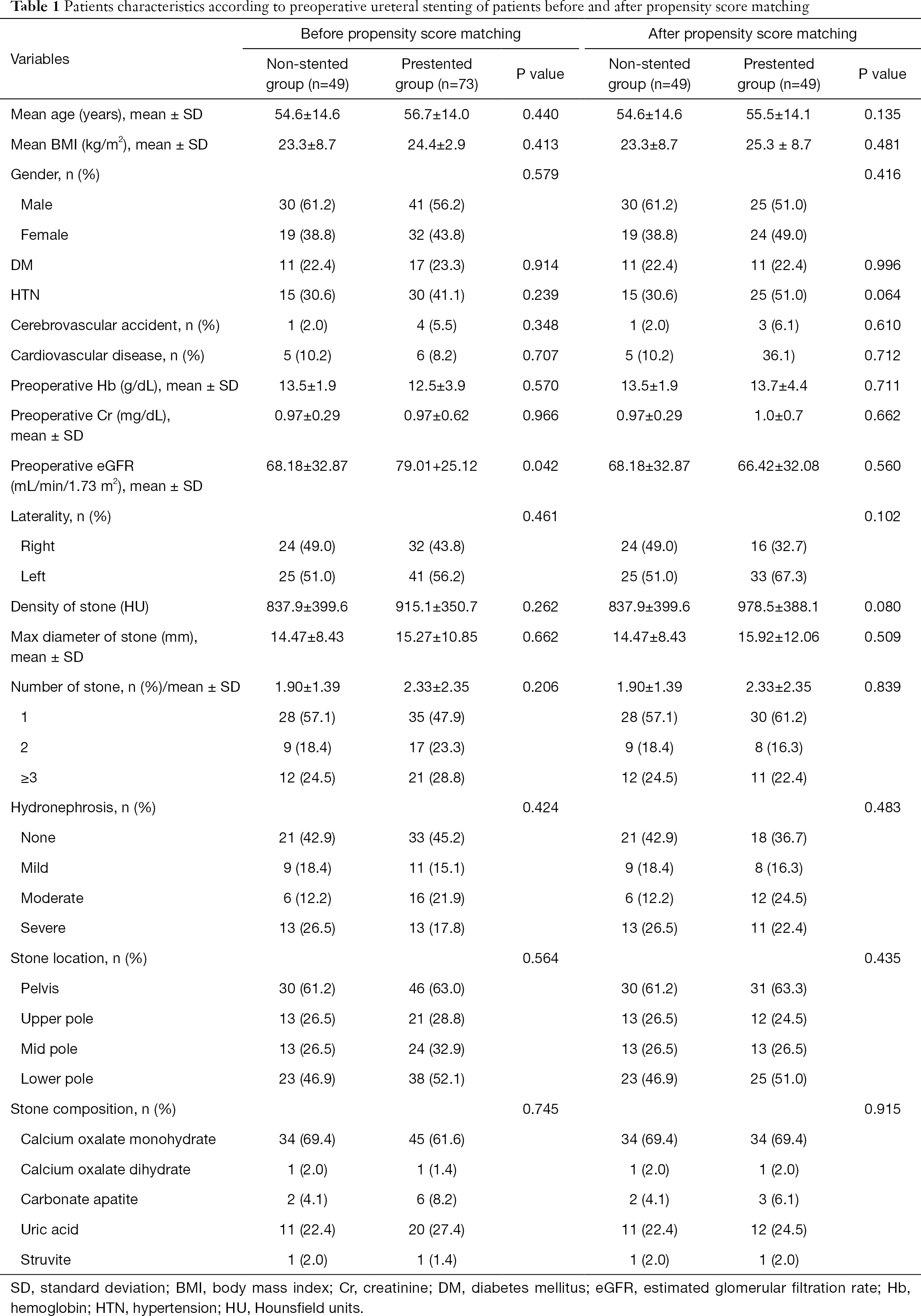 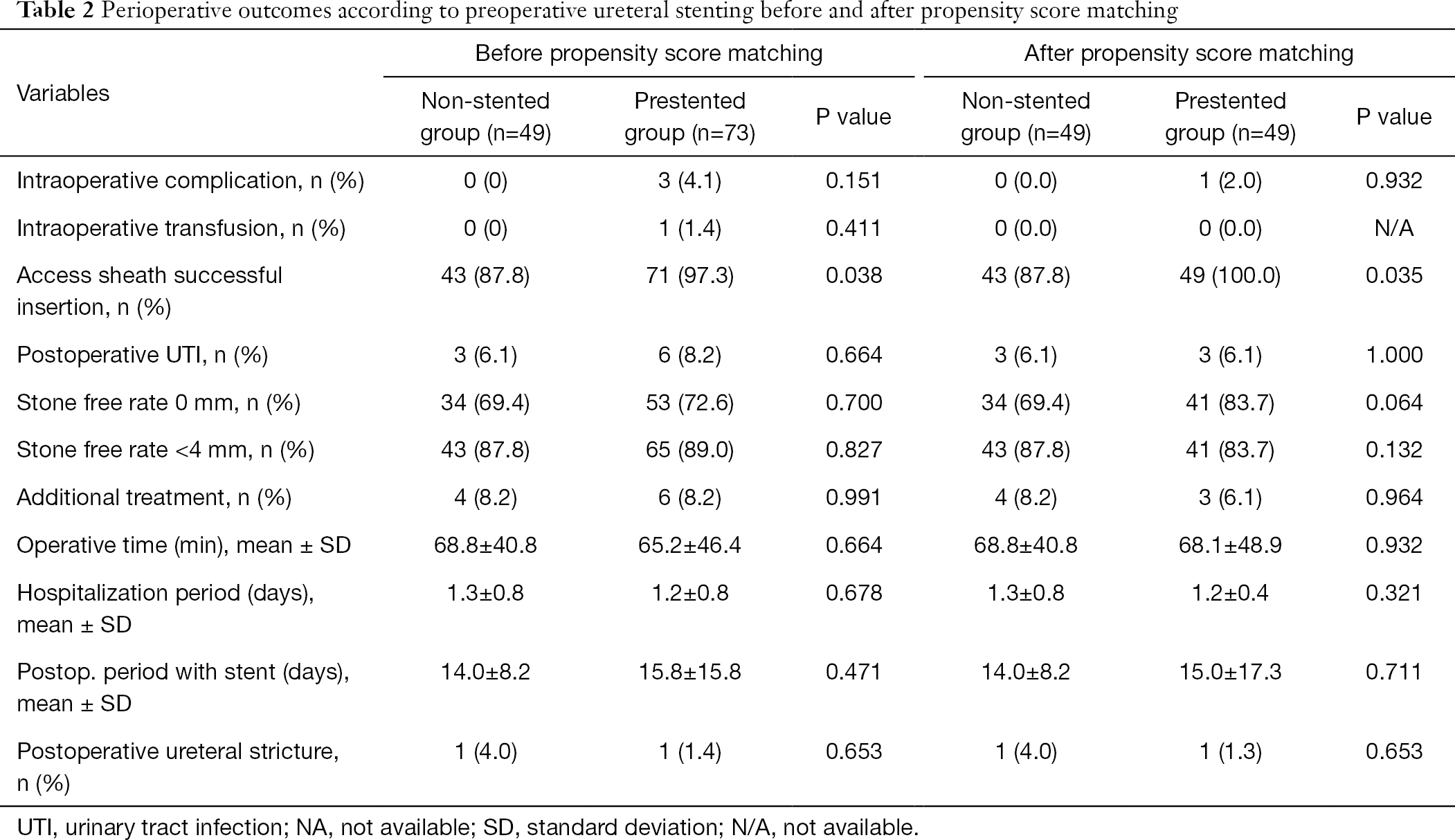 Flexible RIRS procedure was first introduced by Bagley et al. in 1987 (11). Since then, the development of optical technology, the advancement of surgical methods and instruments, and expansion of RIRS have led to an increase in the role of RIRS in primary treatment for kidney stones with a diameter less than 2 cm (1,7,12,13). One of the advanced tools is UAS. UAS in RIRS allows rapid and repeated entry into the ureter and kidney. It also prevents pyelovenous backflow during surgery and maintains low renal pressure, thus lowering renal injury while providing a better view (4,14-17). Despite the usefulness of UAS, we cannot insert UAS into the ureter during every surgery. In previous studies, the failure probability of UAS insertion varied from 3% to 22% (9,18-20). The causes of failure of UAS insertion is usually because of narrow ureter orifices or narrow ureter diameters relative to the diameter of the UAS. The diameter of the native ureter is usually 6–9 Fr, and the diameter of the outer sheath of a commonly used UAS is 11–14 Fr (21). In the case of RIRS without UAS, the renal pelvis pressure increases, and the increased pressure forms a pyelovenous backflow. The increased pyelovenous backflow leads to renal damage or increased infection risk. As such, UAS insertion may be closely related to postoperative complications (22).

A significant difference in preoperative eGFR was observed (P=0.042). The value of eGFR was 68.18±32.87 mL/min/1.73 m2 in the non-stented group and 79.01±25.12 mL/min/1.73 m2 in the prestented group. It is hypothesized that the ureter stent might have solved the obstruction caused by renal stone and upper ureter stone. Several studies have reported that preoperative ureteral stent indwelling can affect the outcome of RIRS (25,26).

This study has some limitations. First, it was a retrospective study. Second, we did not perform random preoperative stent insertion. Therefore, there is a possibility of the presence of selection bias. However, preoperative ureter catheter insertion is more likely to be performed for difficult or symptomatic cases. It is believed that correction of adverse conditions would generate more significant results. Thirds although propensity matching was conducted, the number of patients was limited, and the power of the conclusions obtained may be insufficient.

Funding: This work was supported by the 2010 Inje University research grant.

Conflicts of Interest: All authors have completed the ICMJE uniform disclosure form (available at http://dx.doi.org/10.21037/tau.2020.03.09). The authors have no conflicts of interest to declare.

Ethical Statement: The authors are accountable for all aspects of the work in ensuring that questions related to the accuracy or integrity of any part of the work are appropriately investigated and resolved. The study was approved by the Institutional Review Board of Inje University Sanggye Paik Hospital (approval code: H-2018-10-003). This was a retrospective study and exempted from patient written consent.