The main reason for few studies on the efficacy of changing modifiable lifestyle factors by prospective trials lies on inconsistent results from many observational studies. Before medication treatment, patients are generally educated to modify their lifestyle factors including changing volume of fluid intake, less caffeine, and less alcohol (1). However, these recommendations could only be adopted by limited portion of patients with LUTS. For better and broader application of changing lifestyle factors, more reliable evidences are needed.

Considering the importance of cigarette smoking and alcohol intake for general health of our entire body, more objective studies are needed using large population sample to validate their relationships with LUTS. The objective of the present study was to investigate the relationship of LUTS severity with cigarette smoking and alcohol intake using validated questionnaire.

This study used data obtained from the 2011 Korean Community Health Survey (KCHS). The KCHS is a nationwide public health survey annually conducted since 2008 by the Korean Centers for Disease Control and Prevention. The purpose of KCHS is to estimate community-based health statistics, morbidity, and prevalence of diseases among Korean adults. The KCHS adopted a multi-stage sampling design to ensure that the sampling unit was representative of the nation’s population. In the first stage, a primary sampling unit (district, town, and village) was extracted according to the number of households in each of the smallest governmental administrative units. A probability proportionate to the size sampling method was used when extracting samples. In the second stage, average of five sample households was extracted using systematic sampling methods at selected sampling point and every member of a household who was 19 years or older was interviewed. This study was ultimately carried out using data from 86,707 subjects after excluding 142,519 respondents who were females (N=126,209), who reported currently receiving treatment with prostatic hyperplasia (N=4,745) to prevent bias that might affect LUTS, and who had missing data for International Prostate Symptom Score (IPSS), dietary behavior variables, or covariates (N=11,565) from 229,226 participants originally included in the 2011 KCHS (Figure 1).

This study measured the LUTS of survey participants based on responses from the Korean version of IPSS Questionnaire on KCHS, one of the most widely used tools for evaluating LUTS. As independent variables, frequency of alcohol consumption and smoking status were measured by self-reported questionnaires. Alcohol consumption frequency was classified into “non-drinker”, “drink less than once per month”, “drink two to four times per month”, “drink two to three times per week”, and “drink four or more times per week”. Smoking status was determined by four categories: daily smoker, non-daily smoker, former smoker (smoked in the past but currently quitted), and never smoker (individuals who had smoked fewer than 100 cigarettes in their lifetime). Dependent variables were IPSS grade {mild: IPSS total [0–7], moderate [8–19], severe [20–35]}, IPSS voiding [sum of IPSS Q1 (incomplete emptying), Q3 (intermittency), Q5 (weak stream), Q6 (straining); 5 or higher score categorized as having symptoms], IPSS storage [sum of IPSS Q2 (frequency), Q4 (urgency), Q7 (nocturia); 4 or higher score categorized as having symptoms], and nocturia (IPSS Q7; 1 or higher score categorized as having symptoms).

Descriptive analysis was performed to summarize LUTS and socio-demographic characteristics of the study population. The frequency and percentage by IPSS grade were reported. To analyze group differences, a Chi-squared test was conducted. Ordinal logistic regression (for the IPSS grade) and binomial logistic regression (for the IPSS voiding, storage, and nocturia symptoms) were performed to identify the relationship between LUTS measured by IPSS and alcohol consumption or smoking among Korean male adults after controlling for independent variables and covariates. Adjusted odds ratio (OR) with 95% confidence interval (CI) estimates were reported and threshold for statistical significance was set at 5% (two-tailed). All analysis applied benchmark weight provided from KCHS to adjust for complex sampling design to produce reliable design-based estimates and ensure national representativeness. Data were analyzed in Stata version 14.2 (StataCorp LP, College Station, TX, USA).

Procedures of this study were reviewed and approved by the Institutional Review Board of Soonchunhyang University Seoul Hospital with a waiver for informed consent (2018-12-011). KCHS data are openly accessible at national public repository (http://chs.cdc.go.kr). There were no confidentiality risks to participants of this study because all KCHS data were deidentified.

Table 1 summarizes socio-demographic and LUTS characteristics of study subjects. Of a total of 86,707 study subjects, 77,398 (89.3%), 7,532 (8.7%), and 1,777 (2.0%) had mild, moderate, and severe symptoms, respectively, according to IPSS grade. Those who were older, separated, divorced or widowed in marital status, with lower education level or household income, residing in rural region, having hypertension, diabetes mellitus, or dyslipidemia, smoked in past but currently quitted, non-drinker or drinking four or more times per week tended to be have worse condition based on IPSS grade compared to their counterparts. The distribution of study subjects by IPSS grade showed significant differences in all independent variables and covariates (all P<0.01). 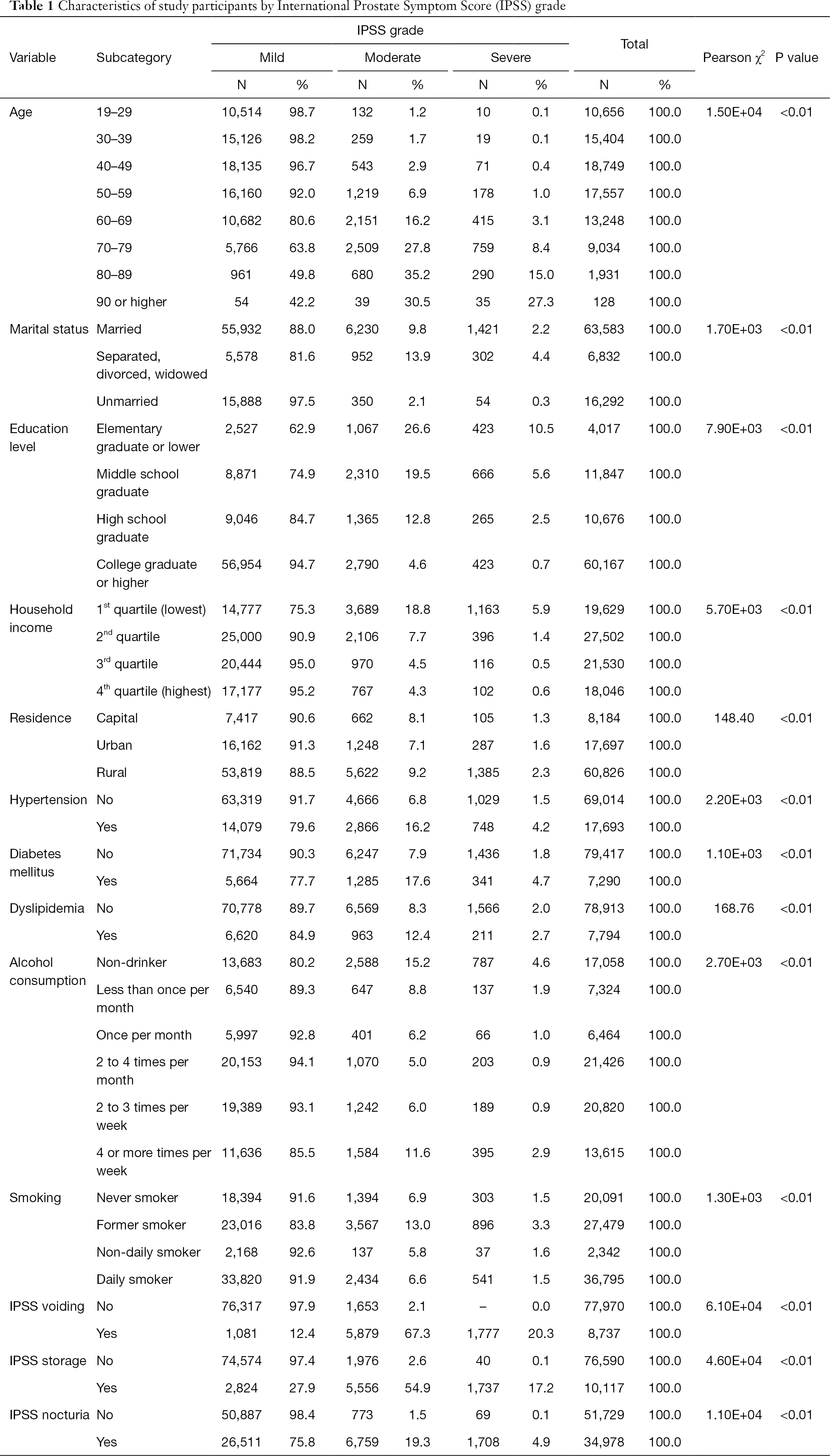 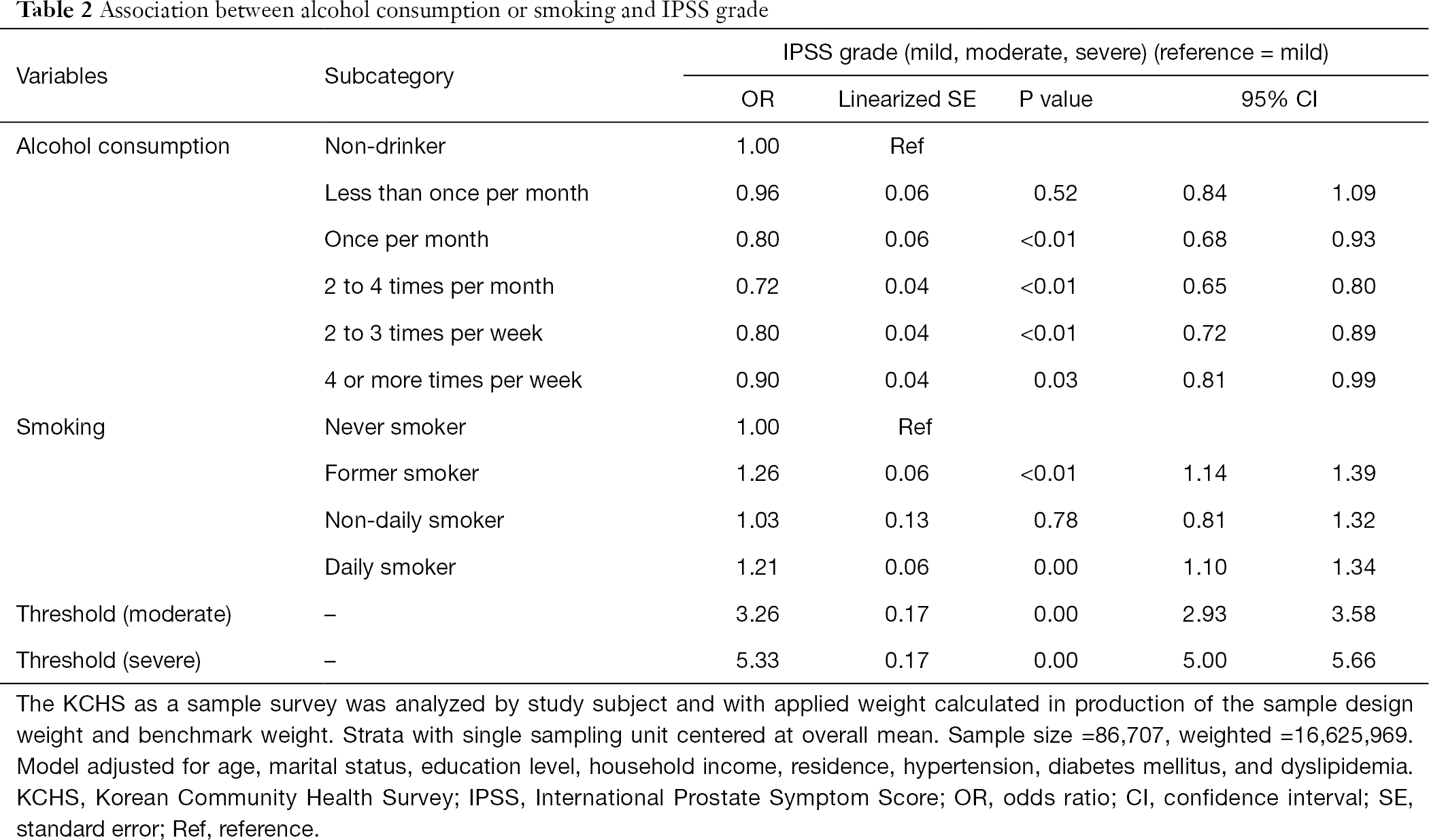 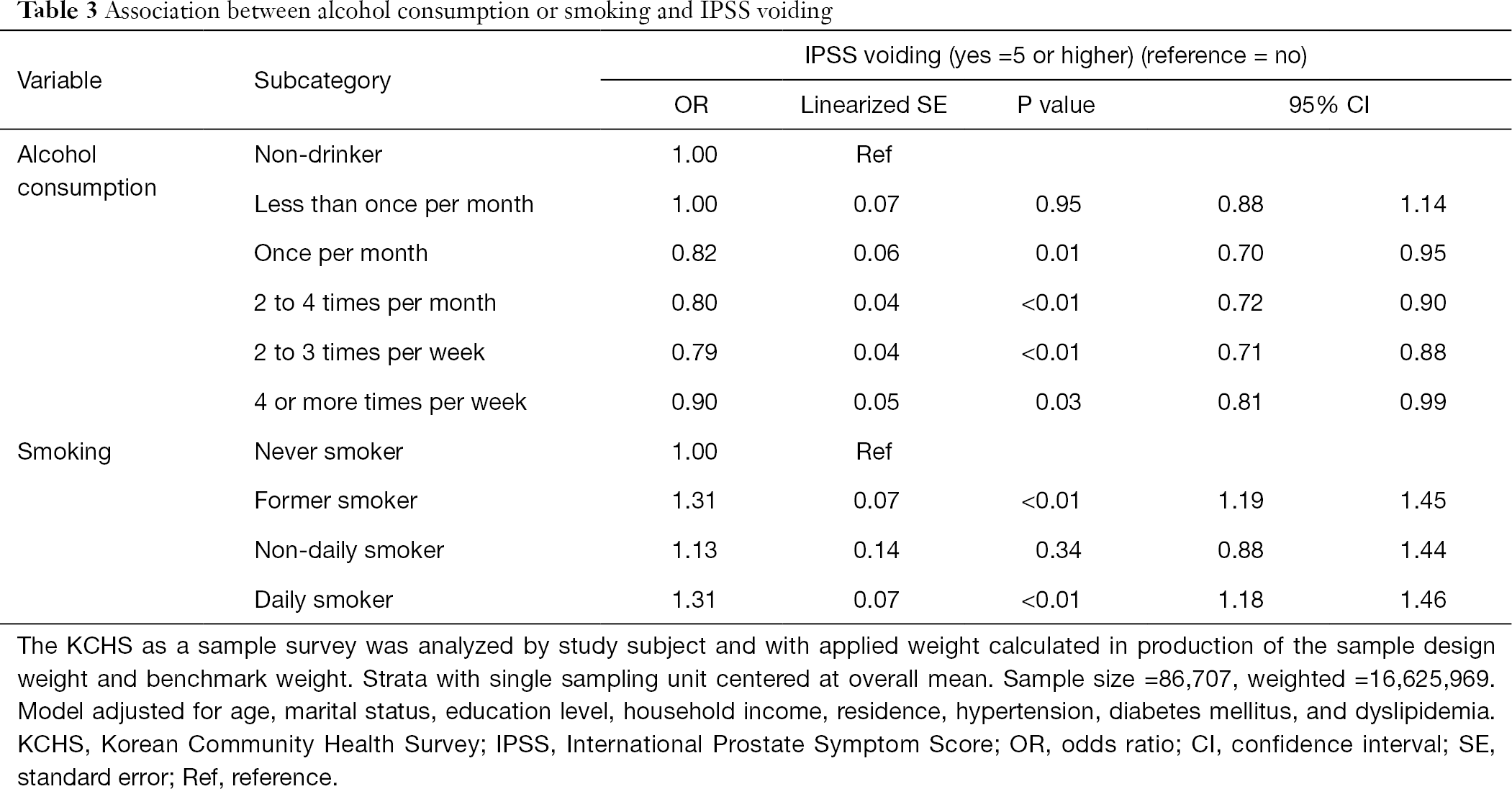 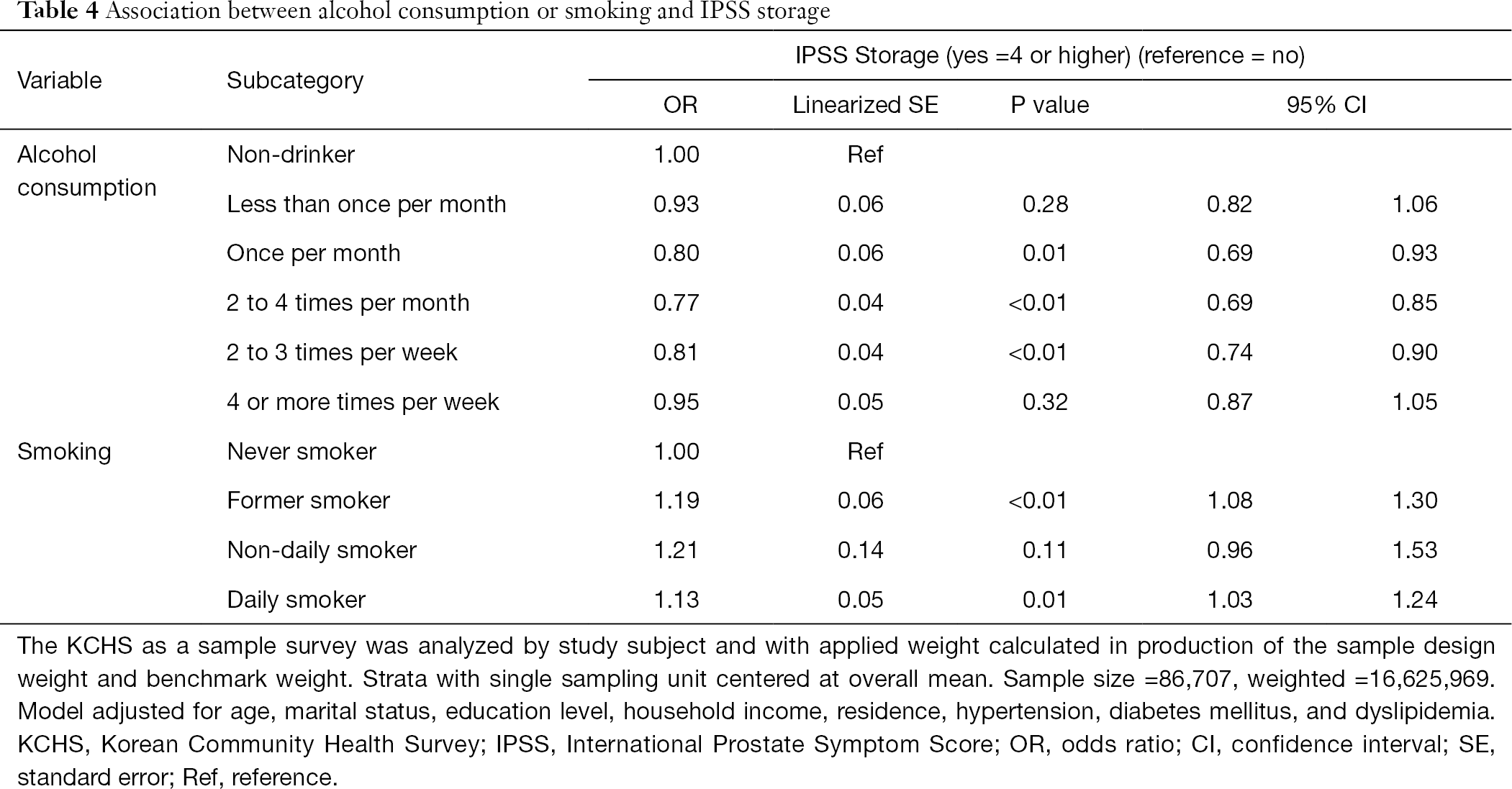 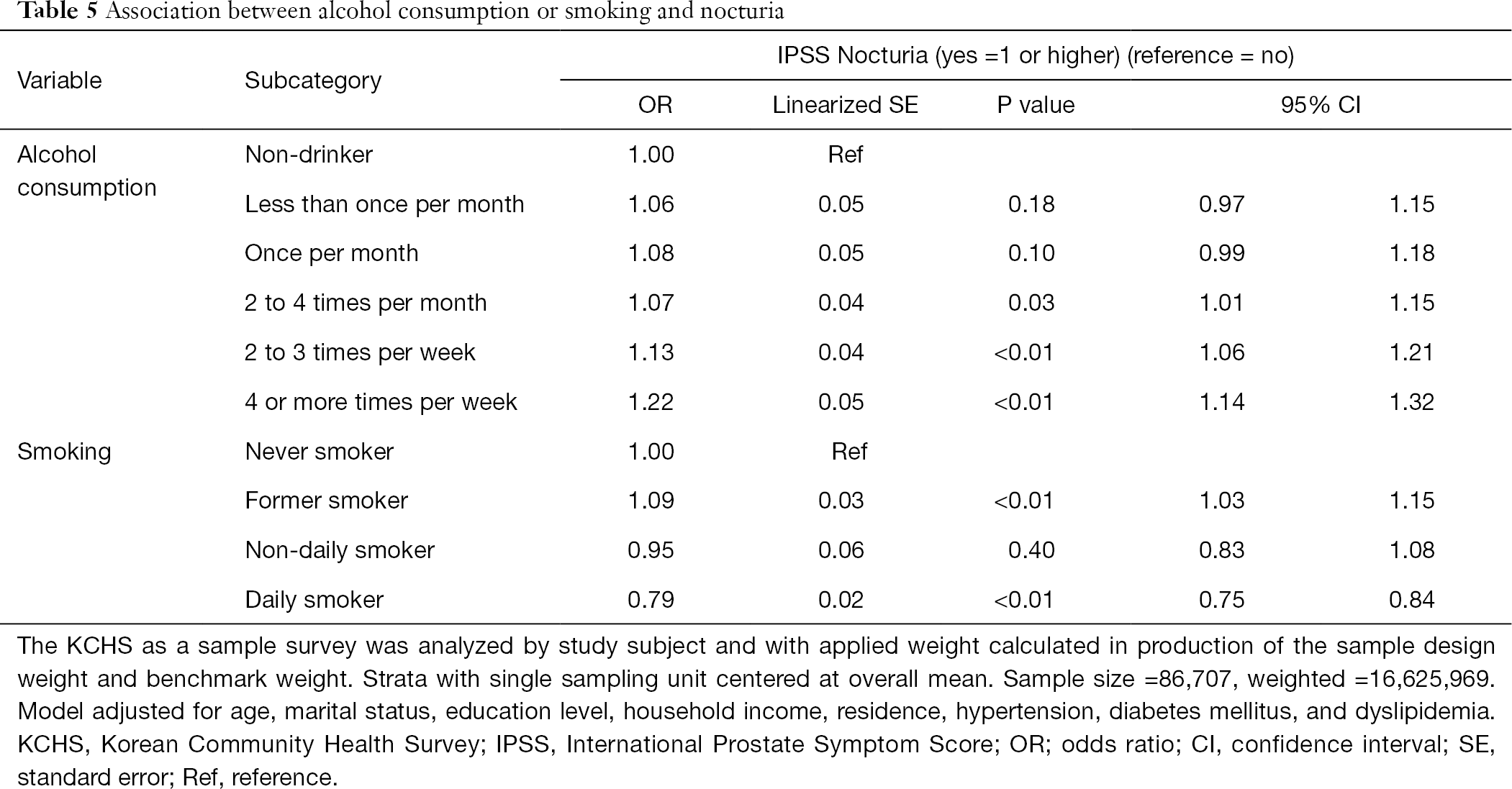 The main focus of this study was to investigate relationships of LUTS with cigarette smoking and alcohol intake using large national representative population data so that more firmed evidence about their relationship could be obtained. Considering conflicting findings about their relationships, this study could provide supportive information by overcoming low population-based sample issue of previous studies. Our results suggest a positive role of alcohol drinking and a negative role of cigarette smoking on diverse LUTS categories including general LUTS (IPSS severity), storage LUTS, and voiding LUTS. The most interesting finding of this study is that cigarette smoking and alcohol intake could affect nocturia. This is a novel finding. Only limited literature has scope of this finding.

Although one recent systematic review concluded that modest alcohol intake was a positive factor for male LUTS as it decreased the risk of LUTS compared to non-drinking as moderate alcohol intake was associated with decreased risk of BPH diagnosis and undergoing surgery (2), two large longitudinal prospective studies showed opposite findings (6,7). One study showed that daily alcohol drinking had no effect on LUTS severity in their 4-year follow-up study (6) while another study showed a positive effect of alcohol drinking on LUTS severity in their 7-year follow-up study (7). However, heavy alcohol intake had negative effect on LUTS including incontinence, voiding, and storage LUTS (4). This J-shaped association between alcohol intake and LUTS severity was also found in a large population study (8). It reported that the risk for moderate and severe LUTS was the lowest in modest drinkers but the highest in heavy drinkers compared to non-drinkers (8).

The possible mechanism for the effect of cigarette smoking on LUTS has been investigated in many experimental studies. These studies have suggested that cigarette smoking could increase androgen level (16,17), increase the sympathetic tone activity by nicotine receptor (18,19), and cause imbalance in hormone and nutrient between muscle and collagen (20). Other studies support that the negative effect of cigarette smoking on nocturia is especially related to metabolic syndrome (21). However, Bing et al. (22) in their Danish population study reported that smoking was inversely associated with nocturia in both crude and adjusted models. Although significance disappeared compared to severe nocturia of ≥2 or ≥3 voids per night, the significance appeared in the ordinal logistic model. Seim et al. (23) have also reported an inverse association between smoking and nocturia, supporting a positive or protective effect of smoking on nocturia. Although we could not adjust metabolic syndrome factor, smoking was inversely associated with nocturia after adjustment of possible covariates including body mass index (BMI). This protective effect of smoking could be explained by increased arginine vasopressin due to increased nicotine, thus decreasing nocturnal urine production (24,25).

Although we have performed a thorough analysis, this study still has several limitations. First, cross-sectional study design hampered the establishment of a causal effect of alcohol intake or cigarette smoking on the severity of LUTS. Second, subjective questionnaire was used to access the degree of alcohol intake and cigarette smoking. However, estimating the degree of drinking and smoking without questionnaire is difficult. Lastly, these data did not include biological data including prostate size or chemistry profiles. They did not include objective measurement of LUTS such as uroflowmetry or frequency volume chart either.

This large population-based study suggests updated evidence about relationships of LUTS with alcohol intake and cigarette smoking. Alcohol showed positive effect on LUTS except nocturia whereas cigarette smoking had negative effect on LUTS except nocturia. Alcohol increased the risk of nocturia while smoking decreased the risk of nocturia. Further evidence using prospective trial is needed to support our study findings.

Conflicts of Interest: All authors have completed the ICMJE uniform disclosure form (available at http://dx.doi.org/10.21037/tau.2020.03.07). The authors have no conflicts of interest to declare.

Ethical Statement: The authors are accountable for all aspects of the work in ensuring that questions related to the accuracy or integrity of any part of the work are appropriately investigated and resolved. Procedures of this study were reviewed and approved by the Institutional Review Board of Soonchunhyang University Seoul Hospital with a waiver for informed consent (2018-12-011). KCHS data are openly accessible at national public repository (http://chs.cdc.go.kr). There were no confidentiality risks to participants of this study because all KCHS data were deidentified.