The prognosis of patients with cancer is not only determined by cancer itself but also associated with many other factors, such as nutritional and physical statuses, mentality, age, and so on (5,6). Meanwhile, systemic inflammation related to cancer is also an important prognostic factor in different cancers (7). The inflammatory reaction changes with the development of cancer (8). Hence, the inflammation index can reflect a patient’s status and may be used as a predictor to forecast patient’s prognosis (9). Several studies indicated a close correlation of red blood cell (RBC) distribution width (RDW) with systemic inflammation, reflecting the inflammation status due to cancer. RDW is a parameter that reflects the volume heterogeneity of RBCs and it can be calculated from the standard deviation (SD) of erythrocyte volumes for the mean corpuscular volume (MCV) (10,11). It is always expressed by the coefficient of variation of the erythrocyte volume in the blood routine test sheet. Inflammation, nutritional disorders and changes in erythropoiesis may alter RDW, which usually affects bone marrow and erythropoietin, a hormone that regulates the production, maturation and survival of RBCs (12). RDW is conventionally used to evaluate hematological diseases, especially anemia (13). In recent years, RDW has been reported as a biomarker of carcinoma (14-17). However, the correlation of RDW with bladder cancer is still not clear. Therefore, this study was conducted to explore whether RDW could serve as a predictor for the prognosis of bladder cancer by analyzing the data of patients who underwent radical cystectomy.

A retrospective analysis was performed after preliminarily processing the raw data. It involved 240 patients who underwent radical cystectomy between March 2009 and October 2018 at the Shanghai Tenth People’s Hospital (Shanghai, China). The inclusion criteria were as follows: (I) patients diagnosed with primary transitional cell carcinoma; (II) RDW value detected from whole blood samples; (III) RDW value detected within 1 week before the surgery; (IV) all patients hospitalized and the follow-up data completed; (V) none of the patients having systemic disease; (VI) all patients undergoing radical cystectomy within 3 weeks from admission; and (VII) no death within 30 days after the surgery; (VIII) patients undergoing neoadjuvant chemotherapy were excluded in our study. After filtering, 169 patients were ultimately included in the study. The study was approved by the Ethics Committee of the Tenth People’s Hospital of Shanghai (SHSY-IEC-4.1/19-120/01), and all patients signed a written informed consent form. This study was also in line with the Helsinki declaration.

Two experienced doctors collected, recorded, and analyzed data, including demographic parameters, tumor-related parameters, and laboratory tests. All blood samples were collected before the patient underwent a radical cystectomy. The overall survival (OS) is the time from the accomplishment of the surgery to the date of the death irrespective of causes. The cancer-specific survival (CSS) is the time from the completion of the surgery to the death of patients due to bladder cancer. Disease-free survival (DFS) is the time when a patient survives without any signs or symptoms of cancer after the surgery.

IBM SPSS Statistics 22.0 software was used for statistical analysis. The Kolmogorov-Smirnov test was used to evaluate normality. Patients were divided into two groups according to RDW values to find out the relationship between RDW and prognosis in different subgroups. The correlation between the RDW value and clinicopathological parameters was evaluated using the chi-square test, Student’s t-test, and Mann-Whitney U test. Univariate and multivariate Cox regression analyses were used to analyze the relationship between RDW and OS, DFS, and CSS of patients after radical cystectomy. Kaplan-Meier curves tested with the log-rank test were used to evaluate the patient survival status. The risk ratio estimated according to the Cox analysis was reported as a hazard ratio, with a corresponding 95% confidence interval. A P value less than 0.05 was considered to be statistically significant.

A total of 169 patients (145 male and 24 female) with bladder cancer were eligible for the study. The average age of the participants was 66.65 years (range, 32–87 years). The average follow-up time was 32.32 months (range, 2–108 months). Further, 51 patients died during the follow-up period. Among the 169 patients, 36.1% had a solitary tumor and 63.9% had multiple bladder tumors. The baseline and clinicopathological characteristics of the patients are shown in Table 1. 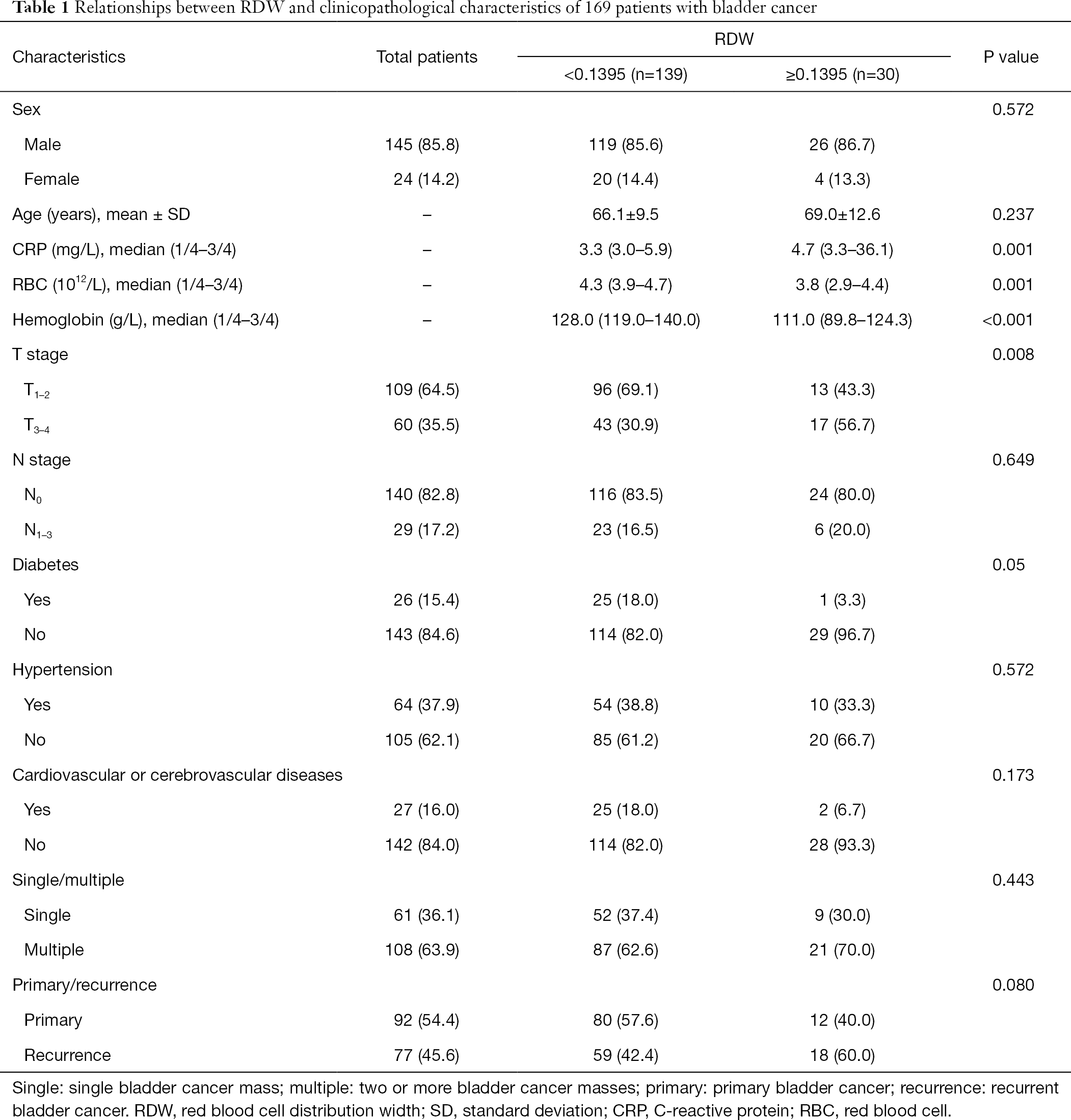 Optimal cutoff value of RDW and clinicopathological features of patients

The patients were divided into two subgroups according to the RDW value. The X-tile software (Developed by Yale University) was used to determine the cutoff value. The value in the high-RDW subgroup was more than 0.1395, and the value in the low-RDW subgroup was less than 0.1395. The increase in the RDW value significantly correlated with higher mortality, a decrease in hemoglobin, an increase in C-reactive protein (CRP), a decrease in the RBC count, and T stage (P<0.05). It was not related to sex, age, tumor size, N stage, diabetes, hypertension, cardiovascular and cerebrovascular diseases, and single/multiple, primary, or recurrent tumors (P>0.05). More details are displayed in Table 1.

Univariate and multivariate analyses of OS, CSS, and DFS based on RDW 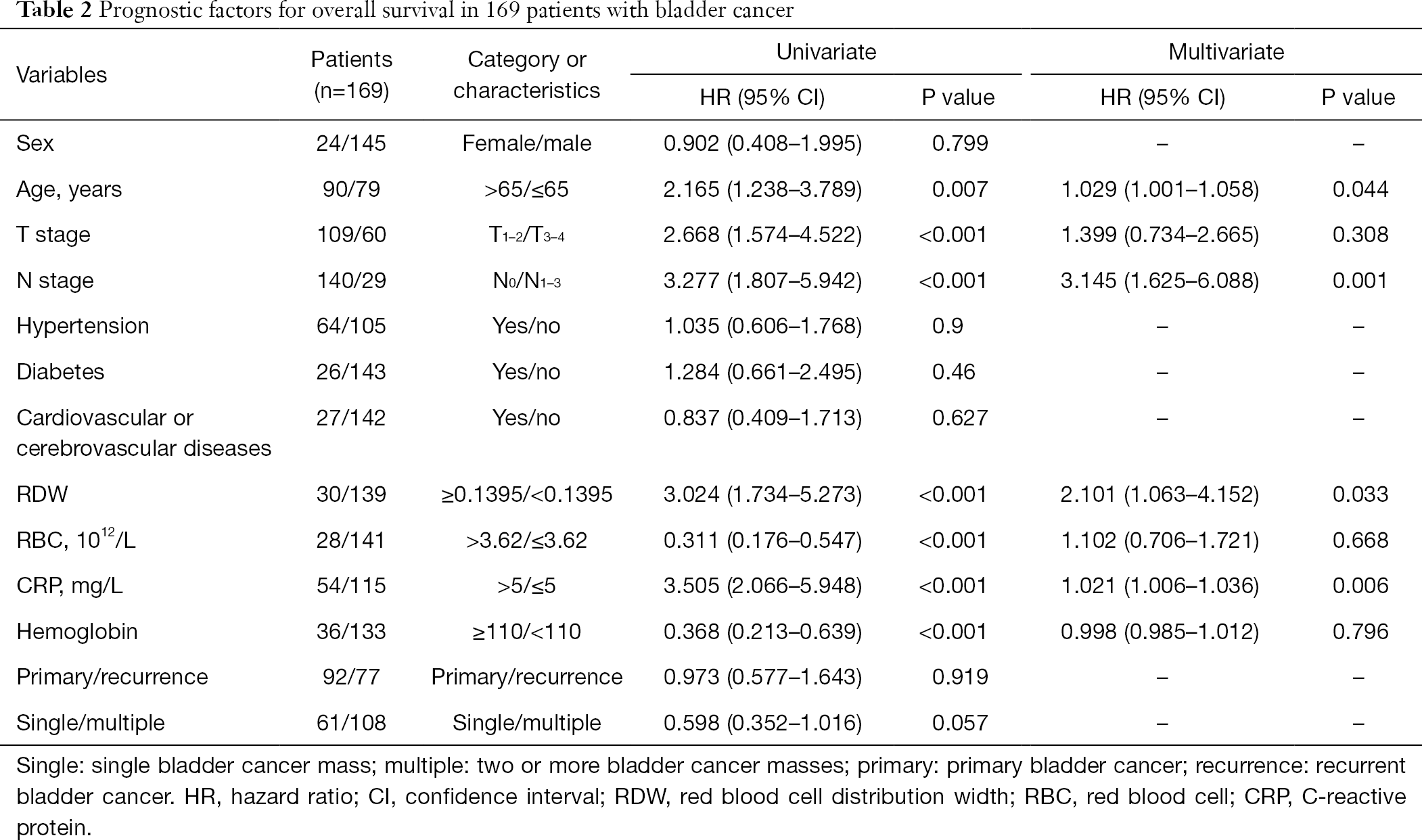 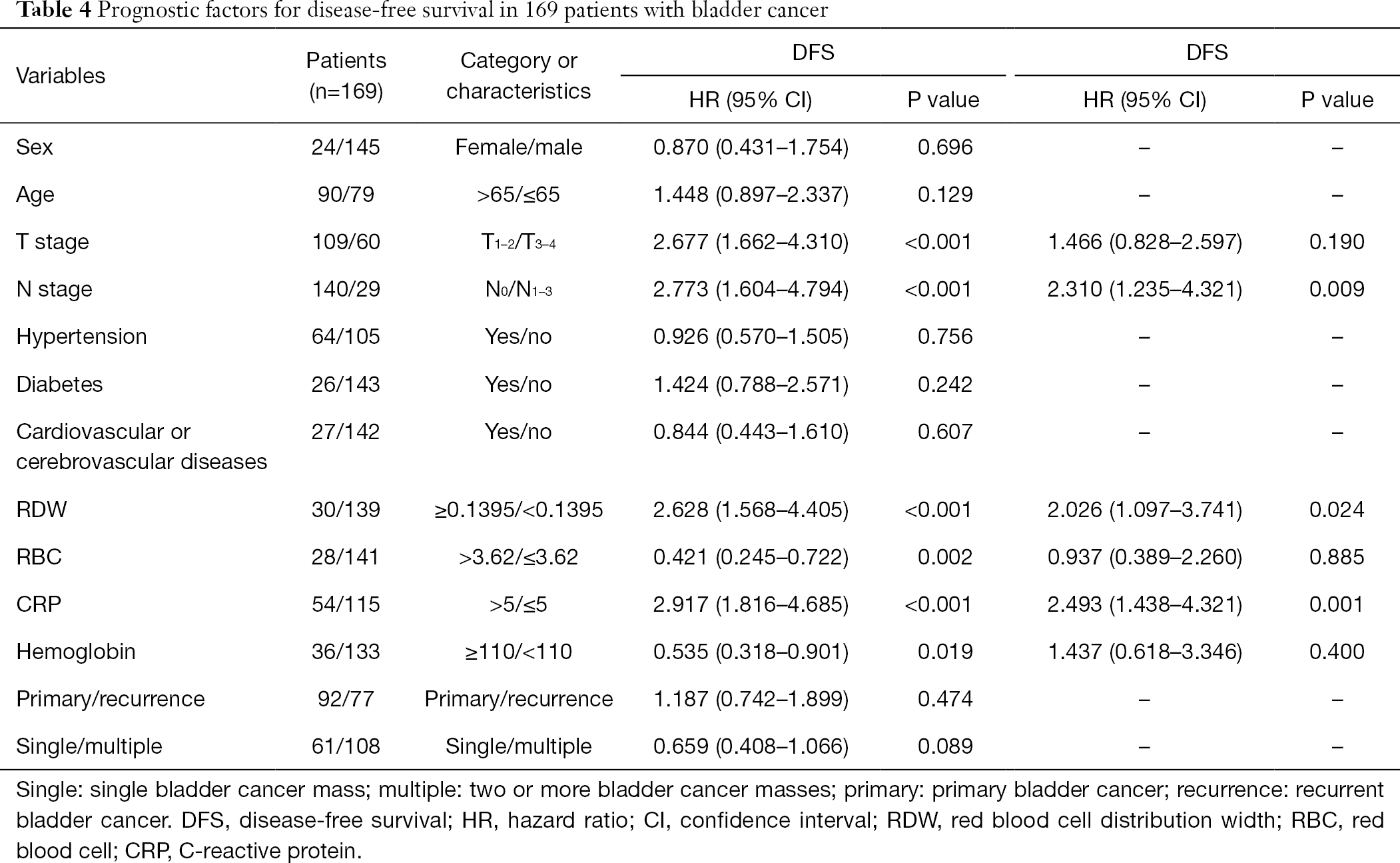 Kaplan-Meier curves showed statistically significant differences in OS, CSS, and DFS between high- and low-RDW groups (Figure 1). A high RDW value might be a risk factor for poor prognosis in patients after radical cystectomy (P<0.001). Therefore, RDW can be used as a clinical marker to guide the work of clinicians.

The present study found that patients with a high RDW value had a poor prognosis, which correlated with a high T stage and a low RBC count and hemoglobin. The multivariate analysis showed that RDW, CRP, and N stage statistically significantly correlated with OS, CSS, and DFS. RDW, CRP, and N stage might be independent risk factors for OS, CSS, and DFS in patients undergoing radical cystectomy.

Several studies indicated a close correlation between RDW and systemic inflammation, which reflected the inflammation status of the body (21). Systemic inflammation has been considered to be closely related to the occurrence and development of tumors in recent years. Some inflammatory indicators have been reported to serve as a potential biomarker of prognosis and correlate with some solid tumors (13,22,23). Cancer can induce chronic inflammation and cause the release of tumor necrosis factor-alpha, interleukin 6 (IL-6), and other cytokines (24,25). For example, activated IL-6 can prompt epithelial-mesenchymal transition in bladder cancer (26). IL-10 can promote the expression of PD-L1 of macrophages in the tumor microenvironment to induce T-cell immunosuppression in bladder cancer (27). Another study has also reported that IL-10 can inhibit macrophages to protect bladder cancer cells (28). IL-17 can accelerate tumor growth through the IL-6/STAT3 signaling pathway (29). Excluding these aspects, pretreatment serum IL levels can predict the progression of some cancers, such as colorectal cancer (30).

This study also found statistically significant differences in CRP, RBC count, hemoglobin, and T stage between the two subgroups. CRP is an acute-phase substance with elevated levels in systemic infection and malignant tumors. Previous studies reported that CRP might predict the prognosis of patients with urinary tract urothelial carcinoma (31-33).

However, the present study had some limitations. First, it was a retrospective study of a single institution design, and the sample size was small. Second, the follow-up time was quite short. Finally, it did not explore the biological interaction between systemic inflammation and cancer. Hence, more multicenter and large-sample prospective studies are required in the future to validate the findings.

In conclusion, RDW has significance as a predictor in patients with bladder cancer who underwent radical cystectomy. However, its specific mechanism of action needs to be explored.

Conflicts of Interest: All authors have completed the ICMJE uniform disclosure form (available at http://dx.doi.org/10.21037/tau.2020.03.08). The authors have no conflicts of interest to declare.

Ethical Statement: The authors are accountable for all aspects of the work in ensuring that questions related to the accuracy or integrity of any part of the work are appropriately investigated and resolved. The study was approved by the Ethics Committee of the Tenth People’s Hospital of Shanghai (SHSY-IEC-4.1/19-120/01), and all patients signed a written informed consent form.